At Sea Otter this year, Öhlins came across the pond and left us with some Swedish gold in the form of the new RXF 36 Coil Fork. While we didn’t have a long travel 29er on hand, we did happen to have a new Trek Fuel EX, so we set the fork to 140mm travel and bolted it up. While opting for coil springs seems to be all the rage on enduro bikes these days, you typically wouldn’t expect to see one on a mid travel bike, but we figured – why not? Here’s what we thought of the beastly fork. 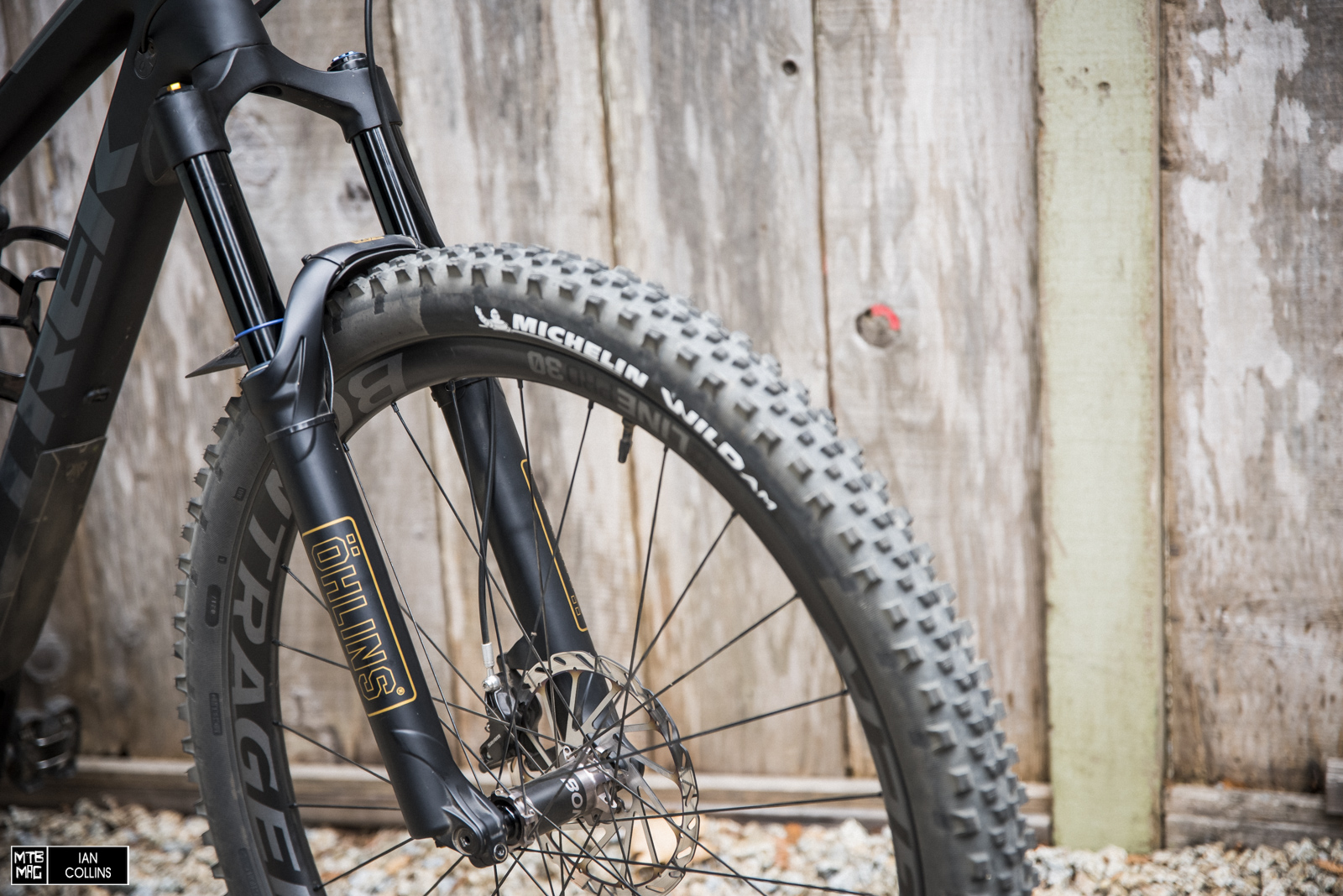 The preproduction version that we tested featured a one piece crown/steerer which is certainly easy on the eyes, to say the least. It’s got to be more expensive to manufacture, certainly stiffer and most definitely less apt to make noise, since it doesn’t require a bonded interference fit between the steerer and the crown. Plus, it also eliminates the need for a lower headset race. Generally speaking, less interfaces = less noise and less problems. 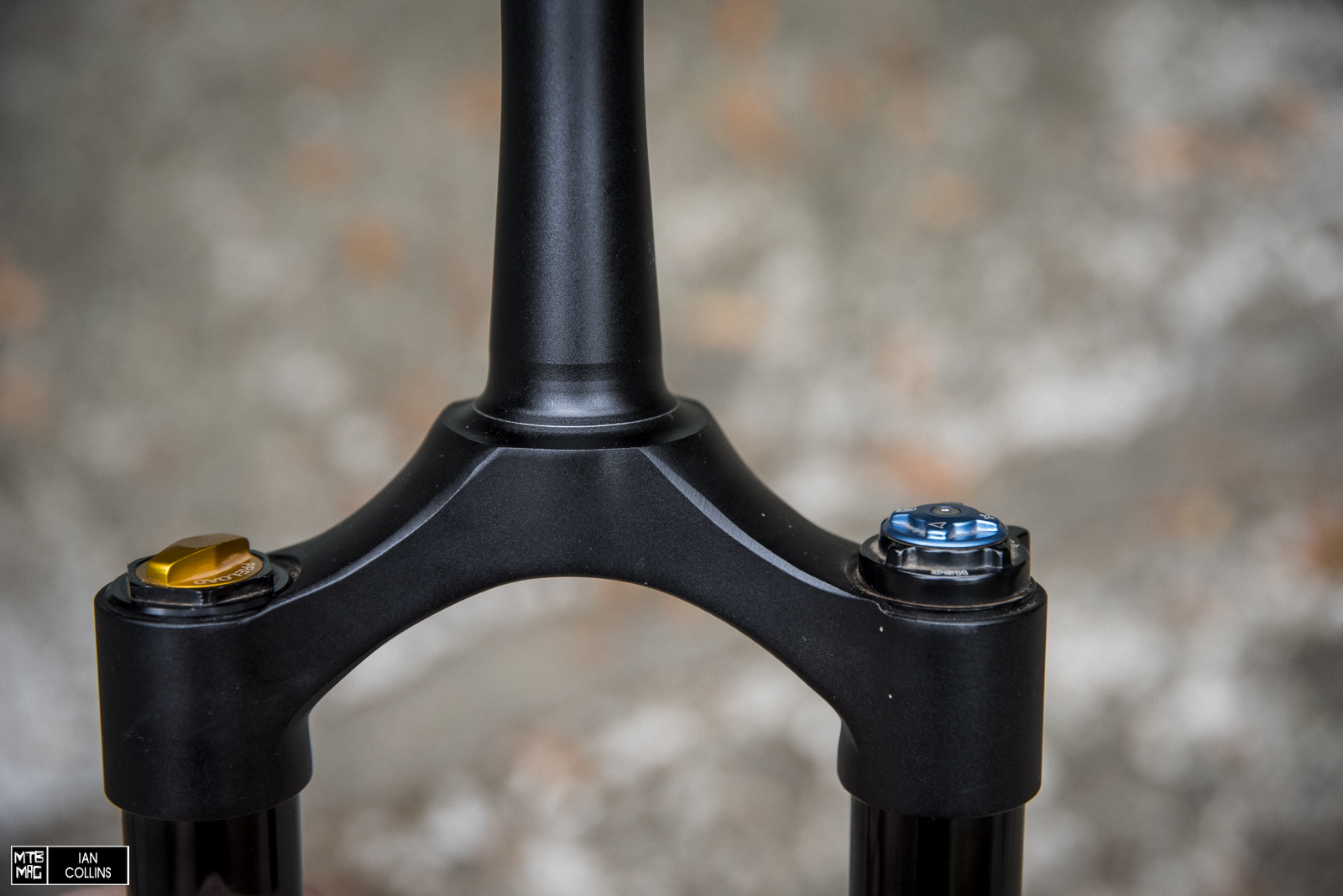 A better look from the front shows the tapered steerer and its radiused interface where it becomes the crown. You can see a very faint, thin silver line where our lower headset bearing sat directly onto the crown. This one-piece style of crown and steerer is great, but it is a bit limiting for headset choice. Our contact at Öhlins recently informed us that moving forward, they’ll be using a two-piece crown steerer which will allow riders with Chris King headsets (and many other brands) to use this fork. 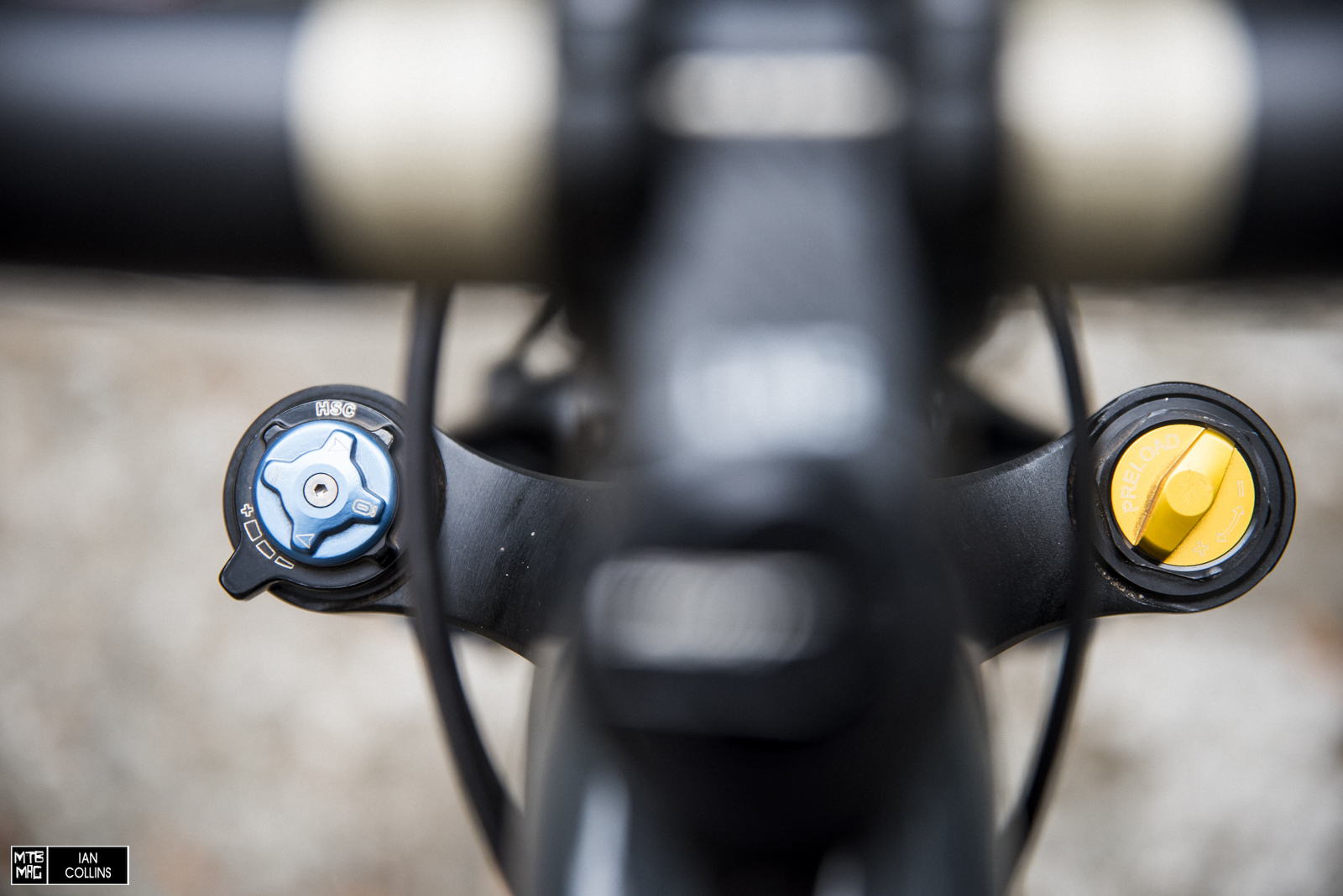 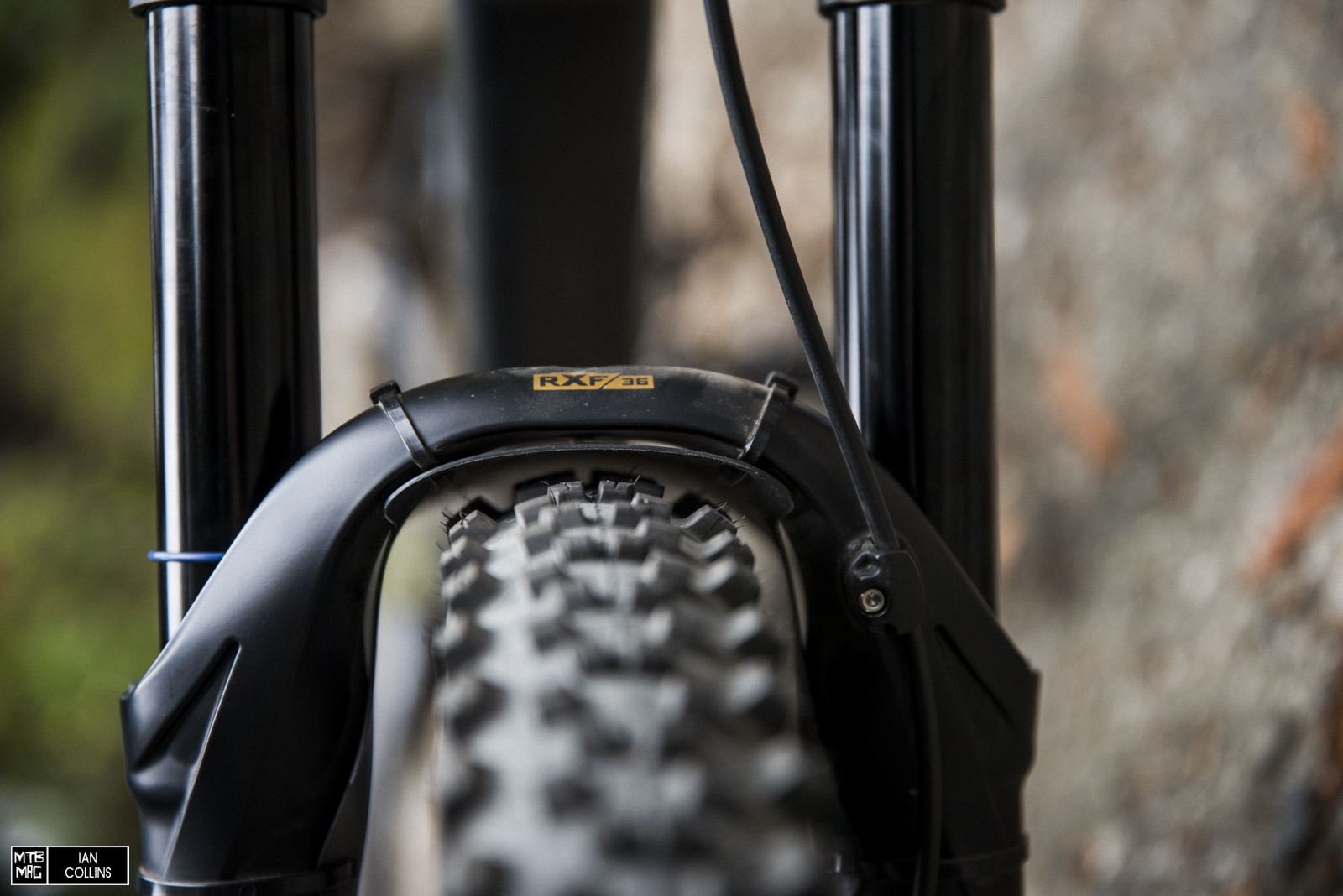 The RXF 36 is intended for 27.5″ Plus and 29″ wheels. We only rode it with 29″ wheels. It’s shown above with a 29 X 2.35″ Michelin tire and a fairly low profile Marsh Guard fender. We’d like to see a bit more clearance here – a 2.5″ wide tire with a fender on a muddy day would be a bit problematic. That said, a tire that wide wouldn’t exactly be the first choice of most riders in bad weather, but it’s worth pointing out. 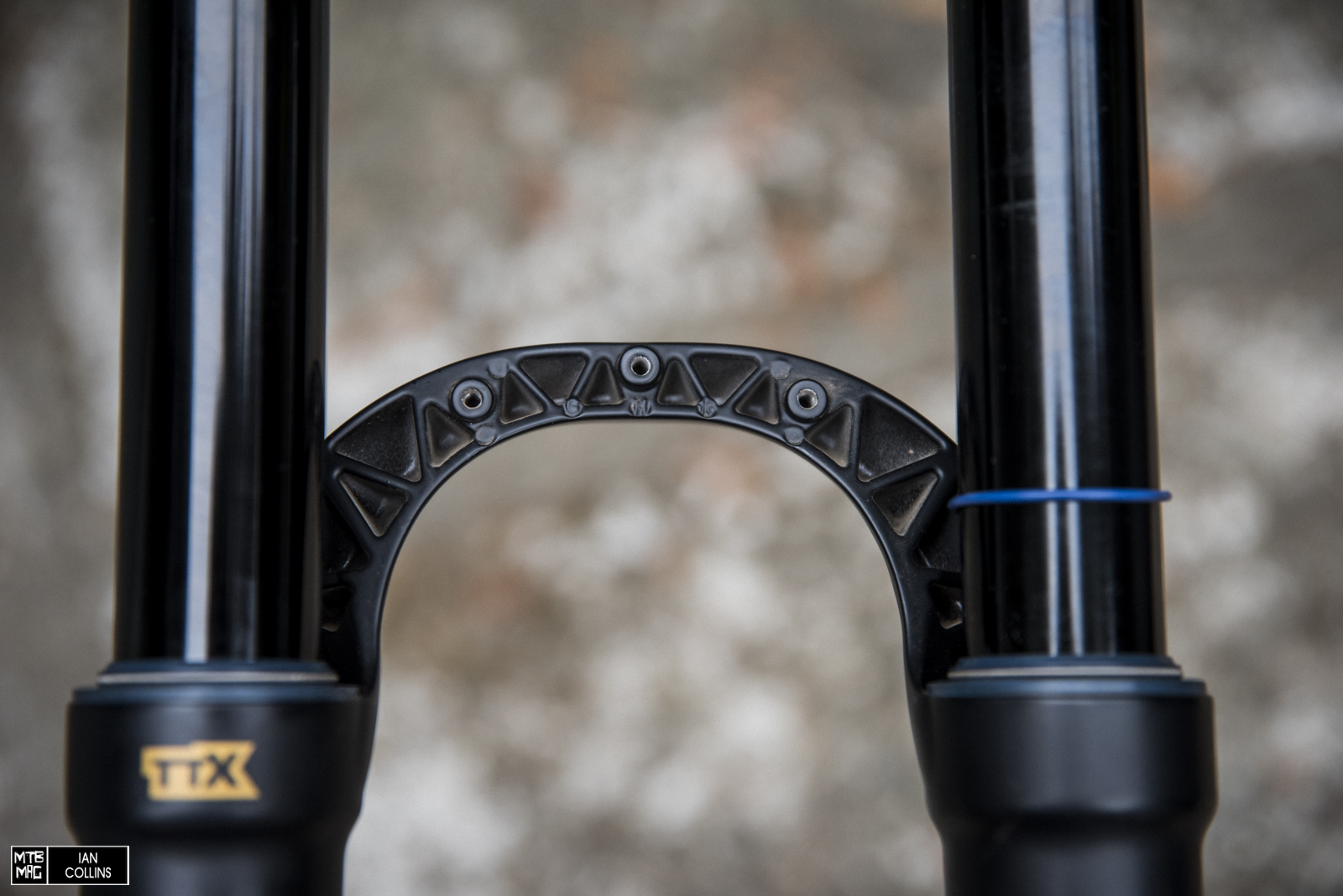 Speaking of clearance and fenders, the RXF 36 has 3 threaded holes in the lower leg assembly to accept a fender. While they haven’t finished developing one yet, it’s apparently around the bend and should be available before too long. Based on our feedback, Öhlins are keen on a fender that will provide more clearance. 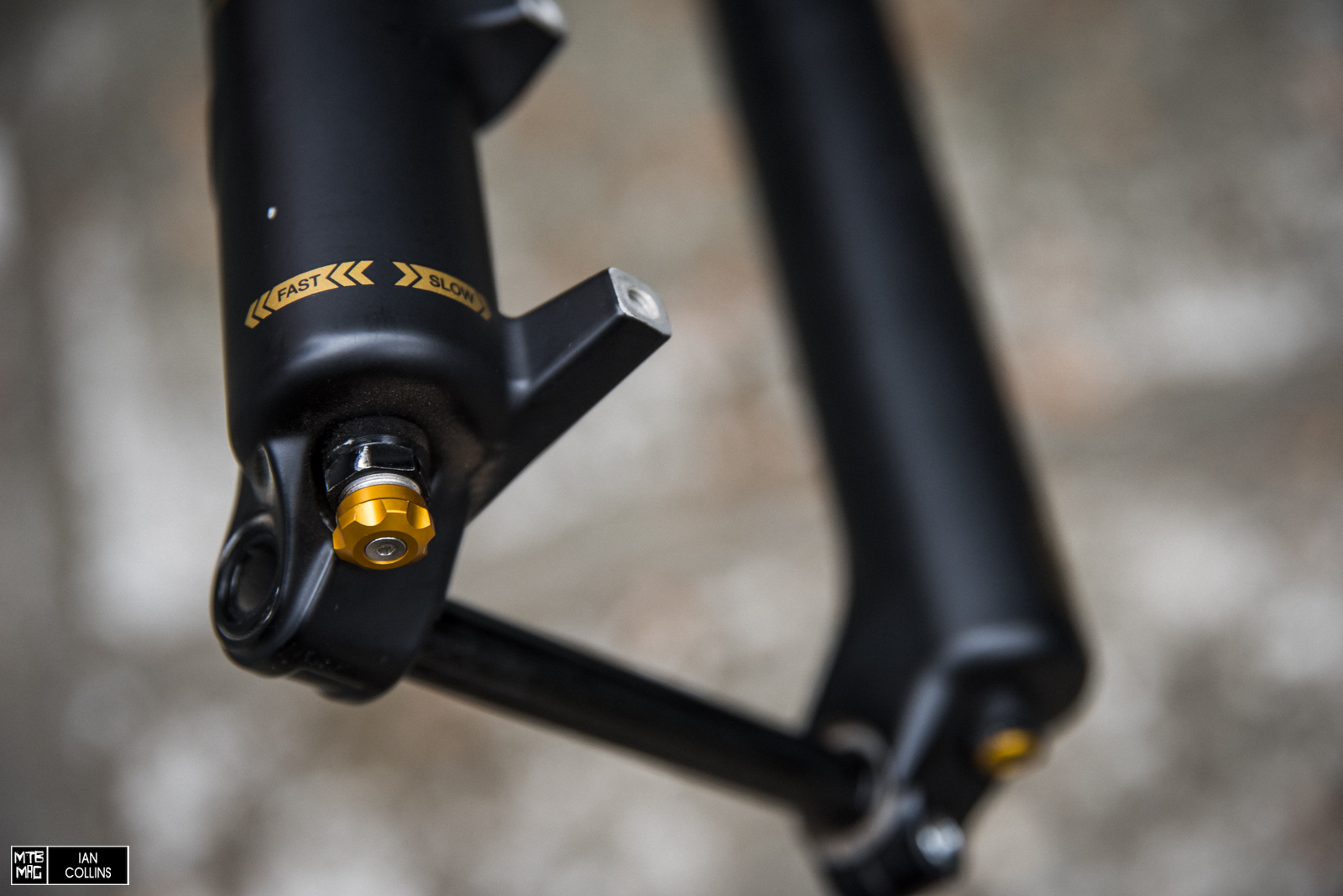 15 clicks of rebound, 180mm post mount brake bosses, and a bolt on axle with which the axle itself and its drive side pinch bolt both conveniently utilize the same size (5mm) allen key hardware.

Our fork arrived with the white 9.7N/mm spring and it was spot on; this meant that we didn’t really experiment with the preload on trail. However from dabbling with the adjuster, we can say that it did provide a fair amount of extra range without causing the rebound to get out of whack. The detents are easy to count and it’s also worth noting that the fork can be swapped back to an air spring should you desire. You’ll obviously need to purchase the necessary parts…

Touching on spring rates, praise is due to Öhlins for offering a whopping 7 different springs where most companies only offer 3, leaving many riders in the lurch – between spring rates with a less than ideal rate. Our 185 pound rider sat appropriately in the strata of available rates with two firmer springs and four softer springs available. 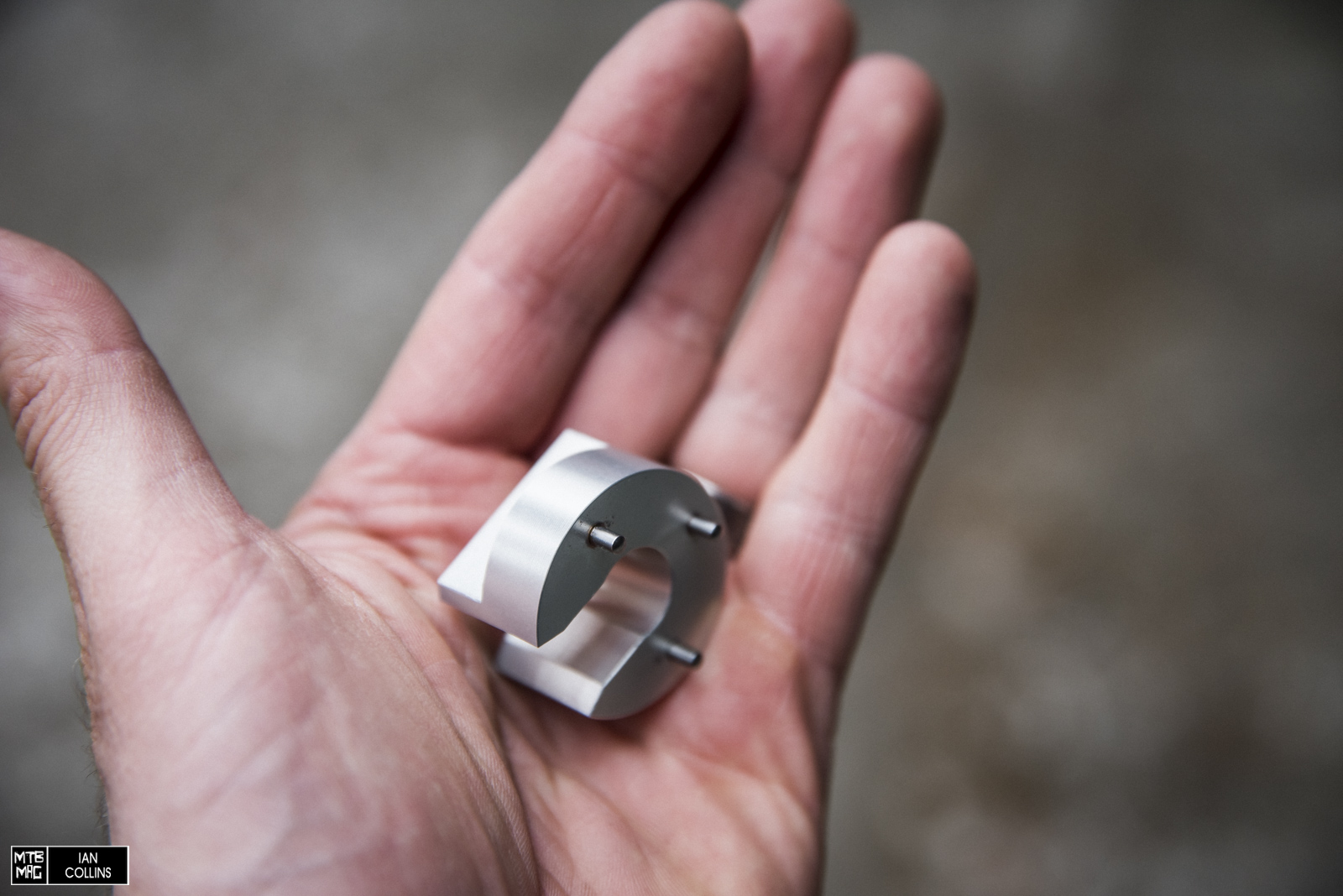 Our fork arrived set to 130mm travel as we had initially anticipated putting it on a different bike. After cracking it open using the special tool pictured above (which will be available in the $15-$20 range), we adjusted it to 140mm travel. That process was fairly straightforward and only took 5-10 minutes. It’s pretty rad that you can buy one fork and adjust it anywhere from 110mm to 160mm without buying any additional parts.

The first thing we noticed with the RXF 36 was just how supple it was. With the RXF 34 fork that we tested some time ago, we were pleasantly surprised by how low the breakaway force was, especially for an air sprung fork. With less seals and lower pressures involved, unsurprisingly – the beefier coil version was even more buttery. However, what we weren’t expecting, was to have such a progressive, supportive feel out of a coil spring – generally speaking coils are synonymous with linear rates. After reaching out to our contact at Öhlins, we got a better understanding of how the RXF 36 broke the mold. 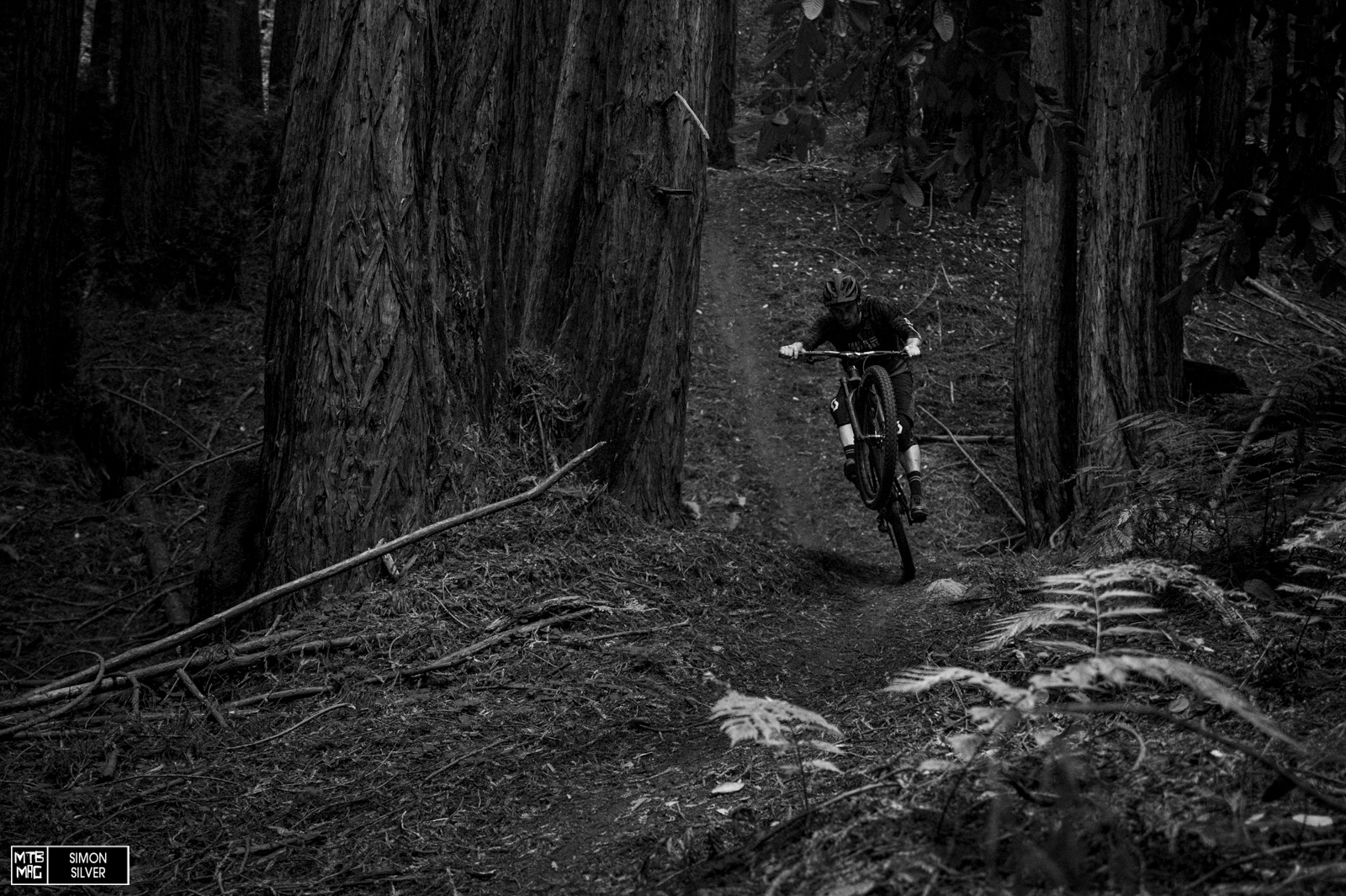 Quoting Alex Boyle, the MTB specialist at Öhlins: “The progression is gained via the damper and also the air trapped in the chassis. Our damper is sealed and built into the entire leg meaning the air has a set volume. It doesn’t bleed through into the upper leg, so everything is controlled within the chassis volume on both damper the and spring side”.  Essentially, as the fork moves through its travel, because the air inside of it is sealed, the pressure builds up toward the end of the stroke. Think of it as built in air assist style bottom out control, like the Push ACS3 hop up kits – the difference being there are no additional moving parts and it’s operating with the available air in the fork. Also worth noting is that the spring is shrink wrapped at each end and in the middle, so the fork was quiet as could be. Beyond the spring side, we found the chassis to be plenty rigid – as we’d expect from a high end fork that’s mainly aimed at longer travel applications. Although gauging exact lateral and torsional flex is hard to quantify without comparative lab testing, we’d rate the RXF 36 somewhere between a RockShox Lyrik and a Fox 36 in terms of stiffness – we consider both of those forks amply stiff by the way. Much like other Öhlins products, the adjusters featured positive feeling detents and offered an effective range. The damping was consistent on long descents and even with quite a bit of low speed compression packed on to keep the fork up in the travel, it never felt rough. The last click of high speed compression jumps up and leaves the fork quite firm for climbing. It’s not as firm as the full lock mode offered in a RockShox Lyrik or a Fox 36; it’s more on par with the trail mode on those forks. That said, in our opinion, that’s all you really need to combat bobbing on most climbs. Generally, when riding those aforementioned forks we use the trail setting for 95% of our climbing anyway.

So…who is a boutique, coil sprung single crown fork aimed at? We’re inclined to think that it’s best suited to heavier and more aggressive riders who are less fazed by the increased weight. Keep in mind that those riders also typically set their air sprung forks to higher pressures, which can compromise the fork’s feel a bit. The ballpark 250 gram weight penalty isn’t a deal breaker, but some of the more gram conscious riders might think twice. One thing is for sure, the performance is fantastic. Compared to the air sprung RXF 36, this fork retails for $100 less – putting it closer in price point to its competition. There’s also the fact that coils springs require less maintenance than air springs. 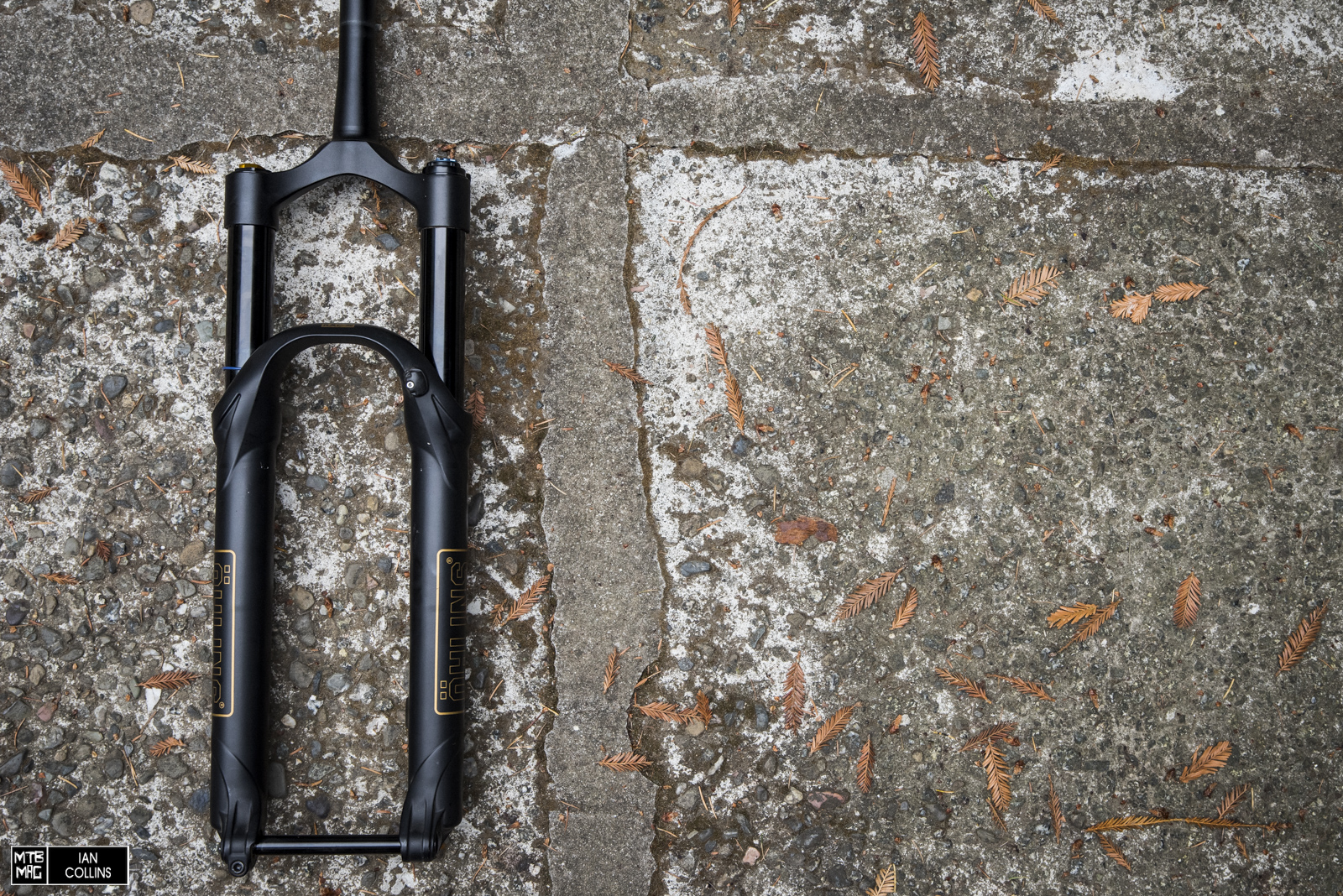 While we wouldn’t hastily relegate the RXF 36 to enduro racers and bike park warriors, those seem to be the types who would stand to benefit from it most.  With that in mind, a 27.5 version of this fork is in the works and slated to be released in the first quarter of 2018. All in all, perhaps what is most praise-worthy is the fact that Öhlins have solved two of the three main downfalls with coil springs: They offer a broad spectrum of seven total spring rates, and they engineered the fork to do away with the stereotypically linear feel of a coil spring.

That said, there isn’t much that can be done about the nominal weight penalty, so it’s on you to decide if it’s best for your needs, but you’d be foolish not to consider the air sprung counterpart if you’re hung up on the weight factor. All in all, another great product from the Swedish company. It’s great to see them shaking things up in the MTB market with a few of their own truly original innovations.