When we first received our Öhlins RXF 34 five months ago, we were frankly quite surprised.  At that time, we’d seen spy shots and chatter on the internet, but didn’t realize that the new fork was so close to production.  Specialized used to have an exclusivity deal with Öhlins for rear shocks in the US where they were only sold as OEM product on their bikes.  If you lived in the US and wanted to buy an Öhlins rear shock for your Santa Cruz Nomad, you’d have to call a friend in Europe.  Just recently they became available for non-Specialized bikes, which is great news. From their introduction, the forks have been available to anyone for any bike, so when Specialized reached out to us we decided on a 120mm fork to fit to our Evil Following. 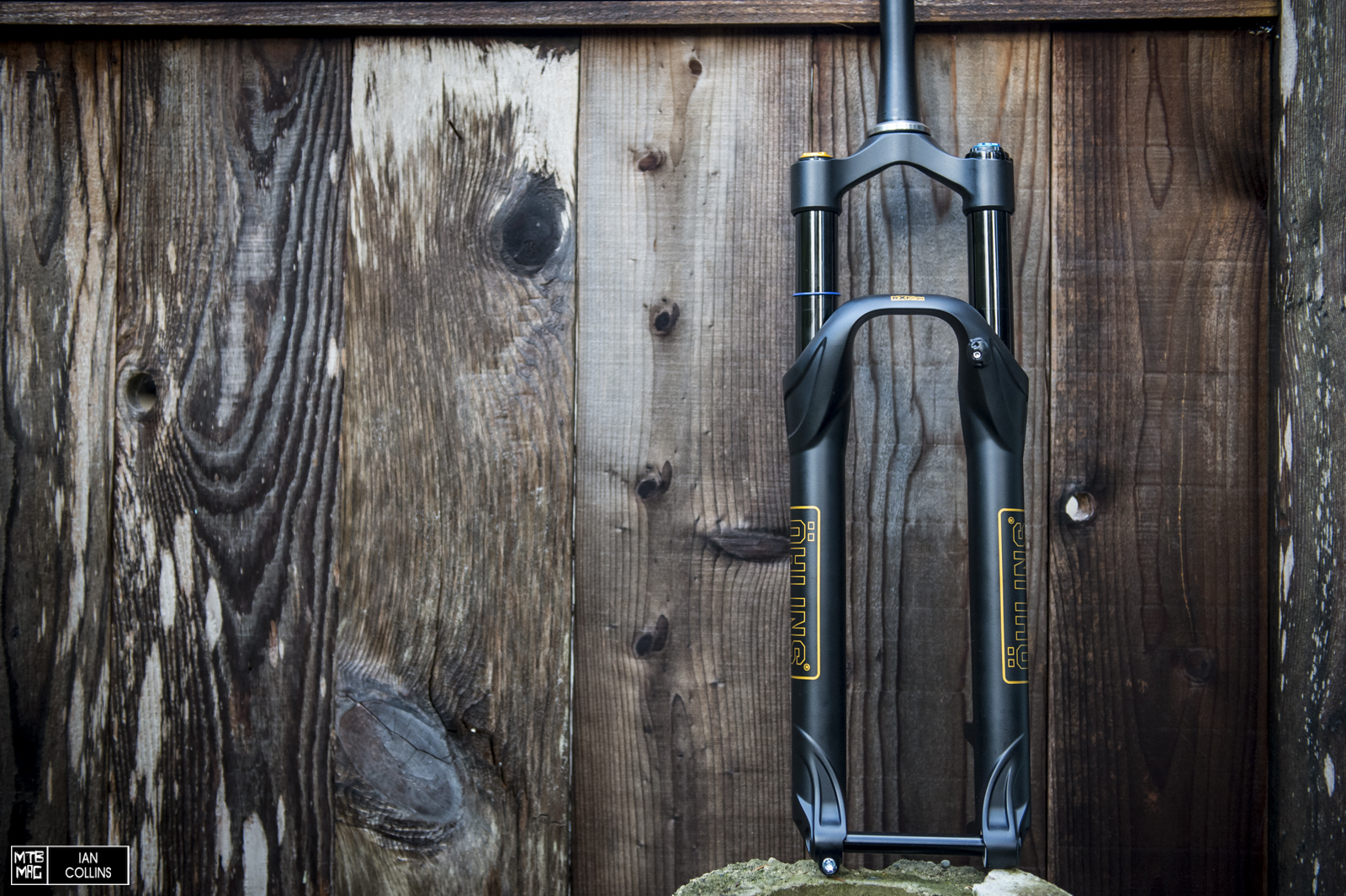 While this is Öhlins’ first production mountain bike fork, the Swedish company began in motocross in 1976 and over the last 40 years their products have won well over 200 World Championships in motorsports while gracing vehicles ranging from Ducatis to Ferraris.  The point is, we have no skepticism about their prowess in R&D and we enthusiastically welcome their entrance to the MTB world, especially knowing that they’re coming in with a slightly different angle than the established players. 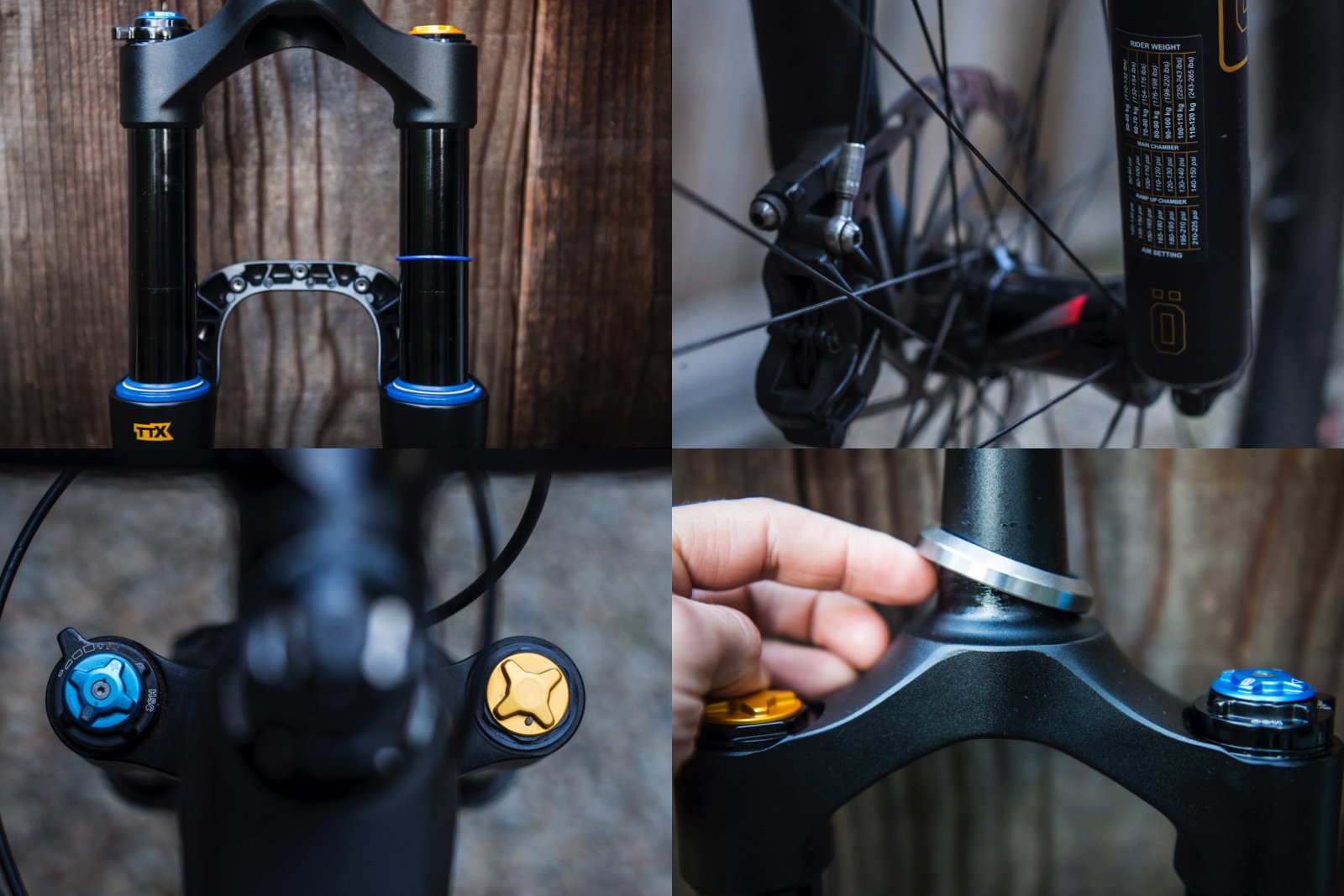 After a quick glance, unique standout features include a 3 chamber air spring featuring endless bottom out resistance tuning, a forged one piece crown/steerer combo and a twin tube damping system.

The first thing we noticed about the fork is the one piece steerer/crown.  It really is a work of art, and it’s brilliant that it doesn’t need a lower headset race(less potentially creaky parts).  While we don’t have any data regarding stiffness compared to competitors, the assembly looks quite massive and is likely part of the reason that Öhlins claim the 34mm stanchion chassis is at least as stiff as some of its 35mm competitors.  The knobs, caps, hardware and finish are all aesthetically and functionally top notch.  The adjusters have very resolute detents so it’s easy to count your clicks. 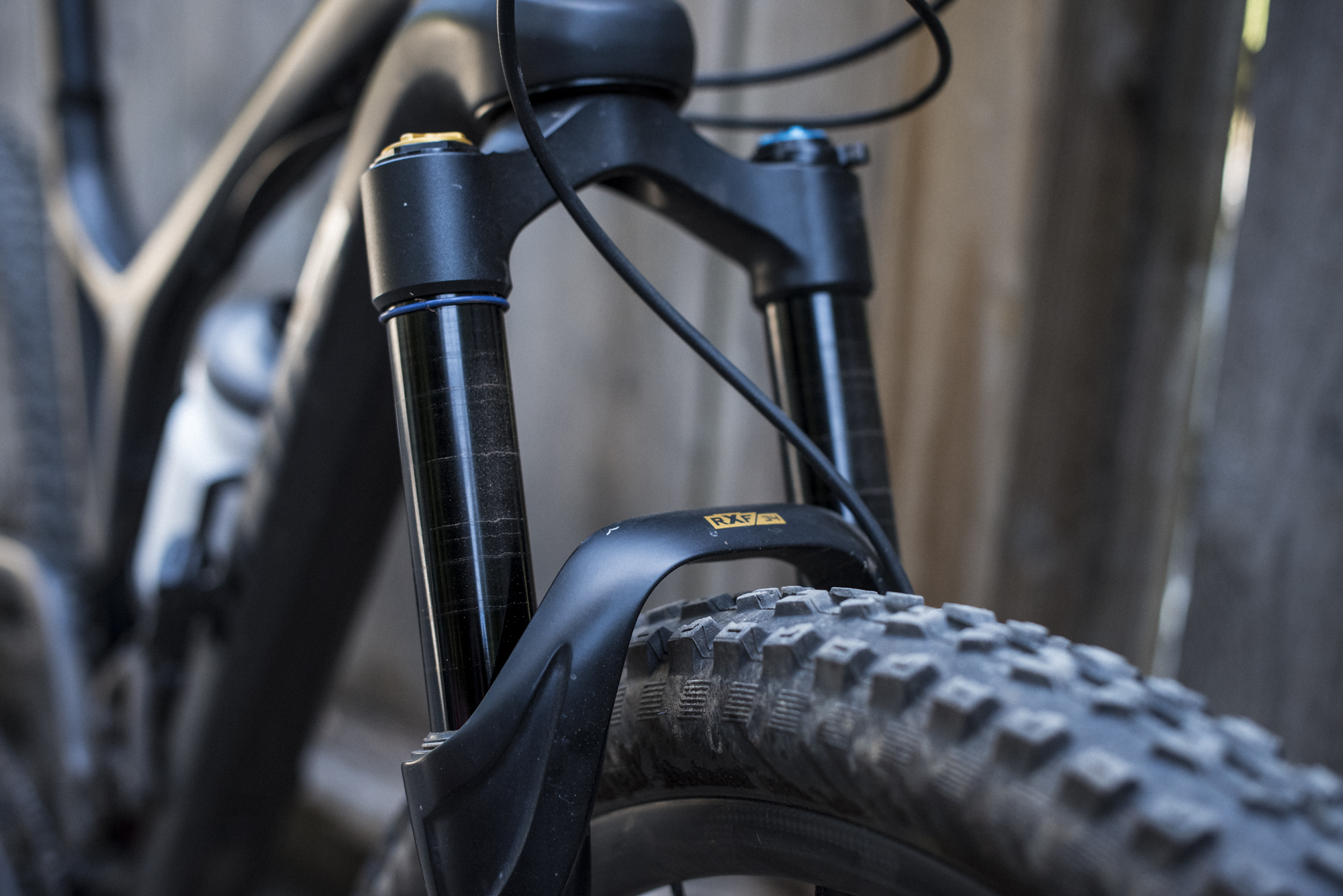 Öhlins puts a tuning guide on the lower leg assembly of the RXF 34 so the first thing our 185 pound test rider did was set up his fork according to the recommended base guidelines. That chart would unfortunately prove to be wildly inaccurate and yield far more sag than we’d ever want as well a rather unsupportive mid stroke and rebound that was a bit speedy. Below we outline what we eventually arrived at, but basically we added quite a bit of damping plus 15 P.S.I. in the main chamber and whopping 45 P.S.I. in the bottom out chamber. It’s worth noting that the rider was coming off of a RockShox Pike which he ran 5 volume reducers in(max 6 usable) to provide a great deal of bottoming resistance. 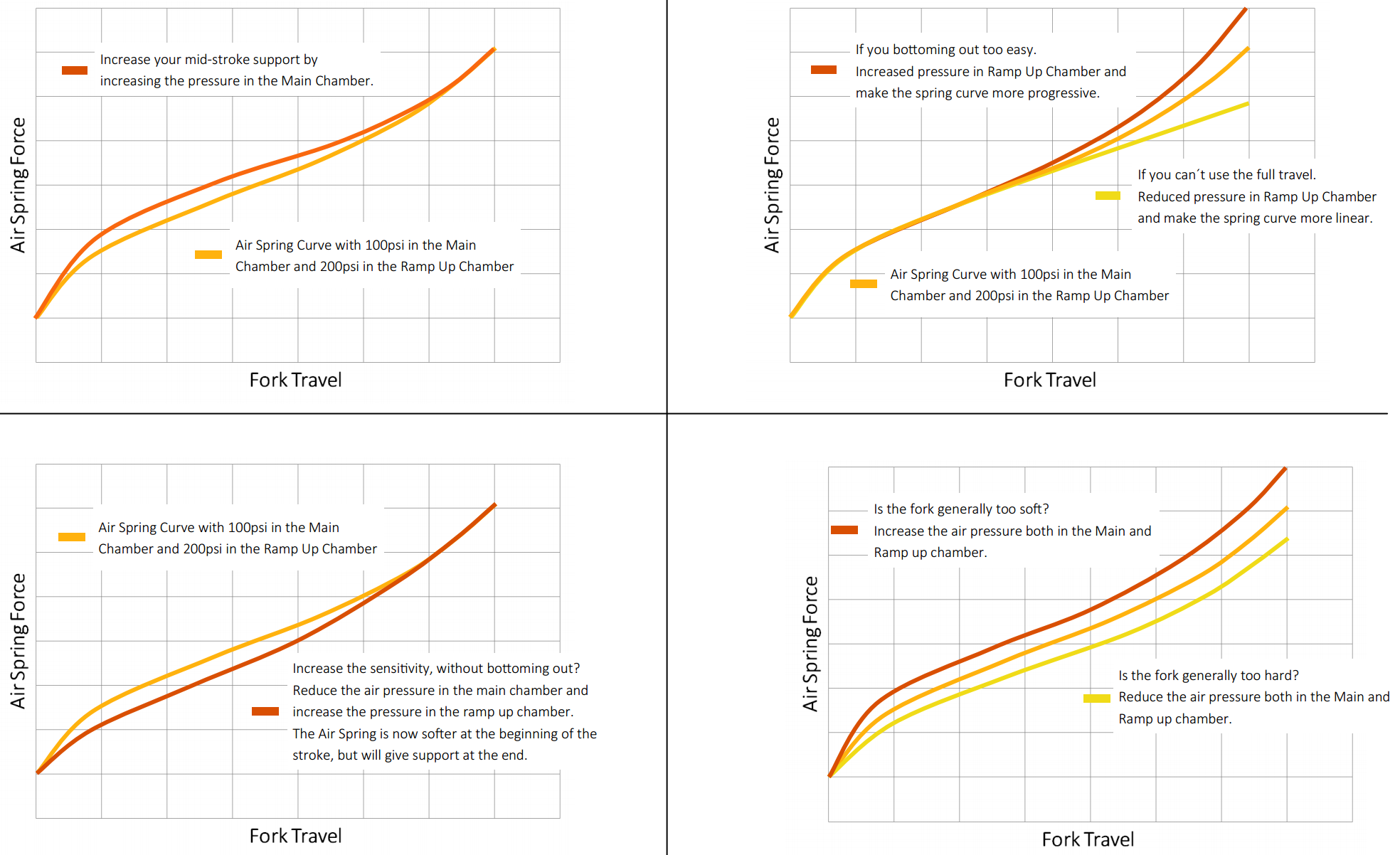 While some may think that the bottom out chamber adds an extra element of complexity, we welcome it with open arms.  If you’re an avid mountain biker spending good money on a fork, you should get familiar with suspension and figure out how to tune based on the terrain you ride.  The diagrams above from Öhlins’ website are a really good troubleshooting resource.

This third chamber(shown above) is the Öhlins equivalent of adding or removing volume reducers in a RockShox or FOX fork and it serves the same purpose : tuning your air spring curve. The process is painless and only requires inflating the schraeder valve with a shock pump at the bottom of the drive side leg.  The advantage to Öhlins’ approach is that the tuning options are infinite and it’s actually much quicker and easier to make adjustments since it’s tool free and you don’t have to fully deflate and re-inflate the entire fork each time you want to adjust your air spring’s progression.

After a great deal of bouncing around, twisting knobs and parking lot tuning, we set out with just under 20% sag, to see how the RXF 34 would fare. Right away we noticed the forks smooth, supple action. It’s easily on par with the best offerings from well established MTB brands. This stiction free nature is not solely due to high quality seals, but the sum of the fork’s parts. Surely an established brand such as Öhlins has already refined their manufacturing processes and everything from the crown to the stanchions to the bushings to the lowers all line up flawlessly. Accurate machining and manufacturing is most critical in producing a smooth fork. The RXF 34 is ace in this regard.

It didn’t take long for us to approve of Öhlins’ claims that they have created a 34mm fork that features chassis stiffness on par with 35mm counterparts. The RXF was plenty stiff both fore and aft – under heavy braking, as well as torsionally – in the corners. We’d rate it as the stiffest fork we’ve ridden in this category. However, that comes with a bit of a weight penalty – the RXF 34 is about a half pound heavier than its RockShox or Fox counterparts. 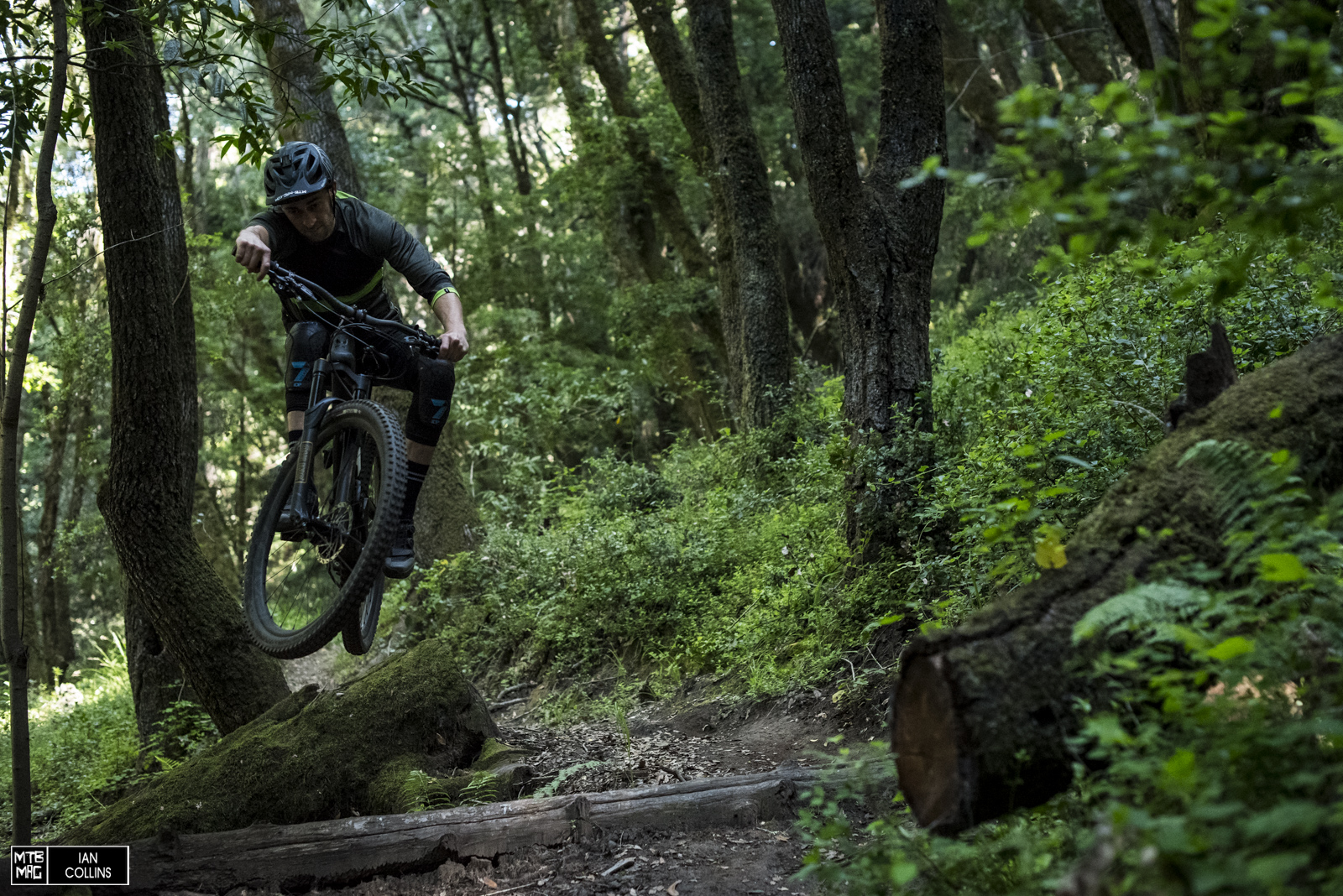 Setting itself apart from the rest of the market, this fork utilizes a high speed compression lever that has 6 clicks.  Full open is just that and fully closed is great for climbing, keeping the fork settled down and composed.  It’s not a full lockout, but we have come to prefer this layout to the ever popular 3 mode levers that are common in the fork market.  It’s nice to have a bit more adjustment at your fingertips, but it isn’t overwhelming or overly complicated either.  We mainly rode the high speed compression 1-2 clicks from full open and found great support from both the damping and the air spring, allowing us to set up our fork to be light and supple off the top, resistant to wallow in the middle and with a nice firm ramp right at the end to prevent harsh bottom outs.

In the 5 months that we’ve been riding this fork, it feels as good as new and as smooth as could be.  We feel no signs that we should be tearing it apart or replacing the seals; it’s as good as new.  Although it’s early in our test to make any sort of claim that this fork is more durable than any others on the market, we have a feeling it will prove to be.  Twin tube dampers in general have longer service intervals but we can’t speak for the air spring and its seals beyond our time on it.  Regardless, it’s definitely confidence inspiring and feels like a quality product that’s in it for the long haul.

So where does the RXF 34 stack up in the fork market?  It’s an extremely high quality product that deviates in design just enough to separate itself from the crowd without utilizing any strange concepts purely for the sake of being different.  However, we had a few small gripes… First, it’s only available in a 46mm offset and we’d like to see a 51mm option, but that may come down the road.  Second, it’s only available in 20mm travel increments, we’d love to see 130mm and 150mm travel options.  Third, it’s a bit heavy – at least a half pound heavier than its competitors.  Lastly, it’s rather expensive as it comes in at close to $400 more than a Fox 34 and at least $100 more than a RockShox Pike.  An interesting note is that Andreani, an Italian MTB tuning company are able to mod the fork to custom 130mm and 150mm lengths, and some riders who want to use this fork on 27.5″ wheels are simply just riding the fork with that wheel size, although it does make the ride height a bit tall. 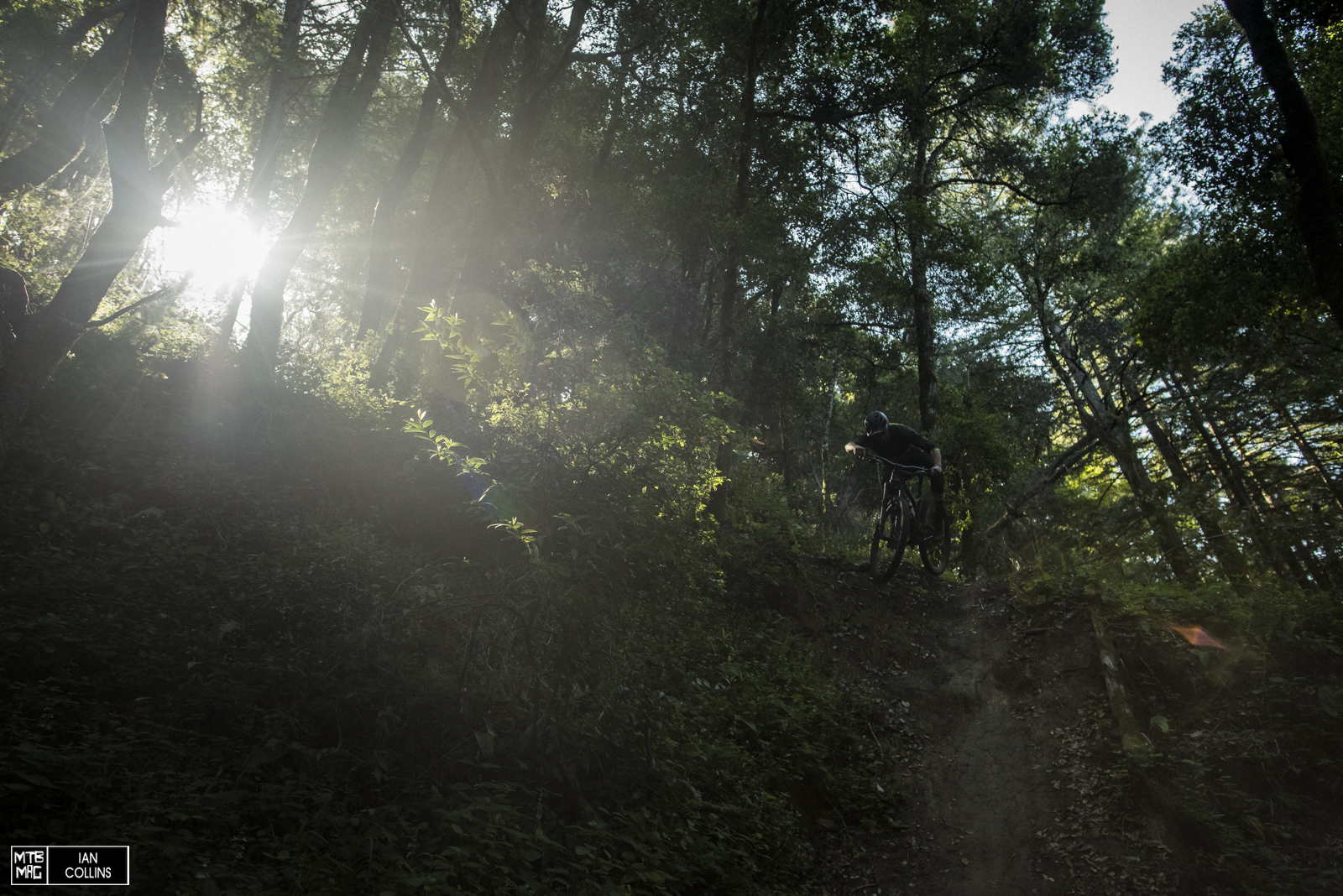 The aforementioned quips are not a huge deal and they’re easy to overlook when you factor in the quality construction, rock solid chassis and brilliant tuning options which are arguably better than anything else on the market.  This is a fork for the rider who wants endless adjustments (save travel) at their fingertips, but demands a burly chassis that won’t require much fuss or maintenance in the long haul.  The takeaway point is that this fork is worth a look and we’re excited to see a company with such a great reputation and history rejuvenating the market.  Considering this is Öhlins’ first production MTB fork, it is an amazing performer.  Big things are coming from them and consumers will surely benefit from added competition in the suspension world.