Since their first days in Southern California in the early 2000’s, Push Industries have generally been focused on high end tuning, rebuilds and hop-up kits. Their 2008 move into a massive facility in Colorado allowed them to continue to expand their business. In the last couple of years, they really made waves in the MTB industry when they boldly decided to make their own, mega high end coil rear shock – the Eleven Six. Completely made in the USA, the 11.6 isn’t cheap, but it’s received nothing but praise by virtually all who’ve ridden it. Concerned with performance above all else, Push founder Darren Murphy has always remained a major proponent of coil springs over air springs.  There’s one lingering problem with using coil springs up front however; since 99% of of MTB forks have no linkage to modify their rate and they don’t build up pressure throughout the stroke like an air spring, they have a very linear feel and thus can bottom out harshly, lack support in the mid stroke, etc… 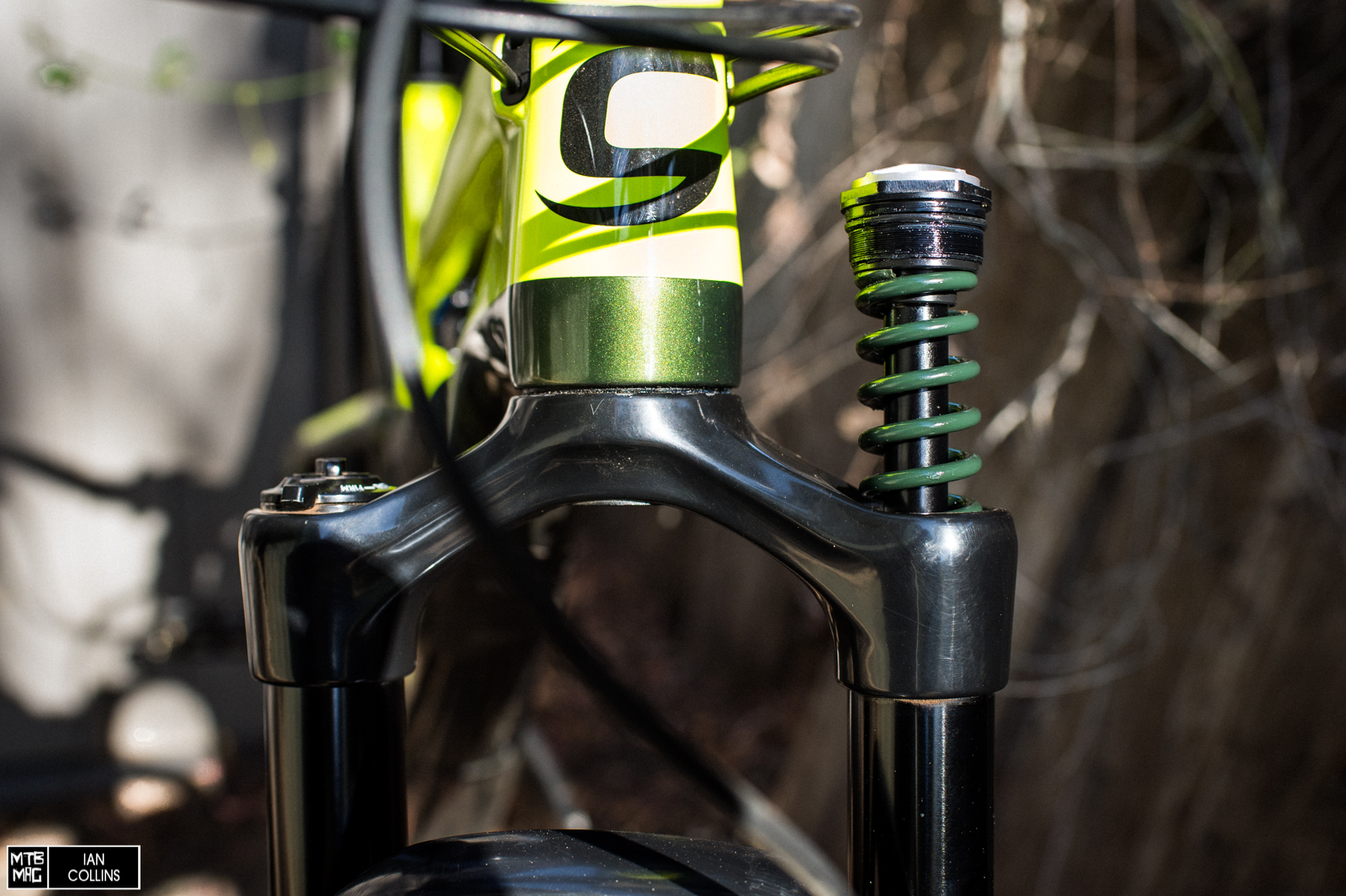 Enter the Push ACS3 coil conversion kit. A while back, we dropped one into our 2018 RockShox Lyrik for testing. The ACS3 doesn’t exactly have any competition to go up against, but it still does boast a unique approach for a multitude of reasons. Most importantly, it combines a coil spring with an air assist “bump stop” bottom out cartridge. This gives the user broad tunability and control over the end stroke feel. Speaking of spring rates, Push doesn’t settle for the “soft, medium, hard” B.S.  Instead, they offer 7 spring rates. We chose the green one because we love how it matched the green paint on our Cannondale Jekyll…just kidding! Dumb jokes aside, read on for more details and to see how the ACS3 has treated us over time. 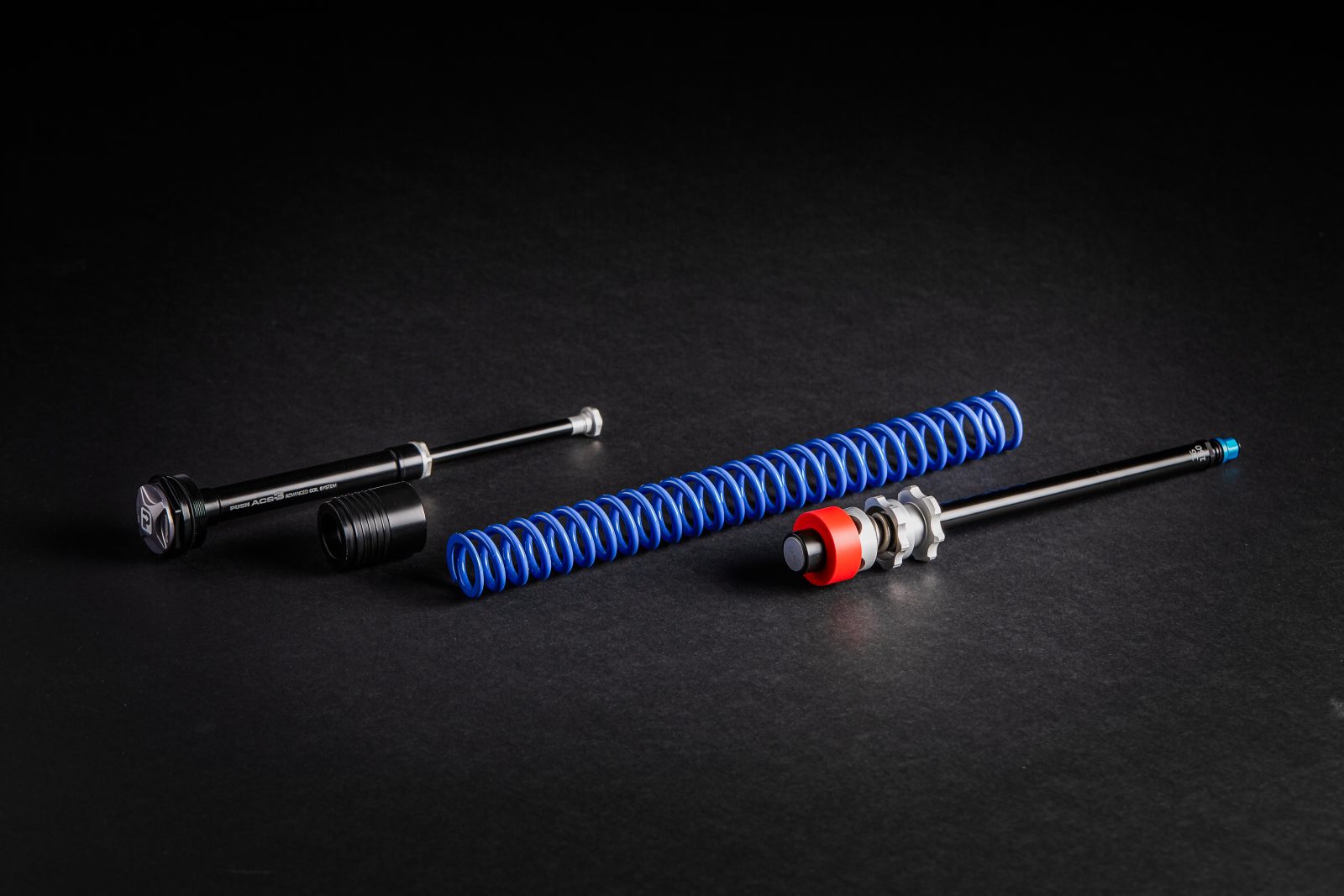 Pictured above is everything that arrives in the box. To install the ACS3, you obviously need to gut the current air spring in your fork. This goes for all models, whether RockShox or Fox. It’s also worth noting that once you install and ride this kit, you can’t switch back to an air spring as the stanchion’s inside surface can get slightly marred by the metal spring, rendering it unable to be properly sealed by an air piston. This remains true despite having plastic shrink wrap on the spring, which is mainly there to keep things running quietly.

The installation is quite simple. Aside from requiring different tools, it certainly doesn’t require much more technical knowledge than a standard air spring/lower leg service. The video above provides a nice how-to, and unless your fork is new, or close to new, we’d recommend popping some fresh seals in while you’ve got everything apart. RockShox’ updated SKF seals are excellent, as are Push’s own “Low Friction Seals”.

After a ballpark 1/2 hour installation, it was off to see how the ACS3 rated. Lately we’ve had a few different experiences with 170mm travel Lyriks, so it was nice to have a good baseline established. In recent years, we rode the 2018 fork as stock and then with a Vorsprung Luftkappe before eventually dropping the ACS3 into it while we also tested a separate 2019 Lyrik on another long term bike. The first thing you’ll notice on trail is massively improved sensitivity. This is hallmark of a coil spring in general, and one of its biggest advantages over an air spring. Since coil forks don’t have to seal off a great high pressures at a low volumes, they don’t require snug seals and the inevitable friction that they can’t be divorced from. 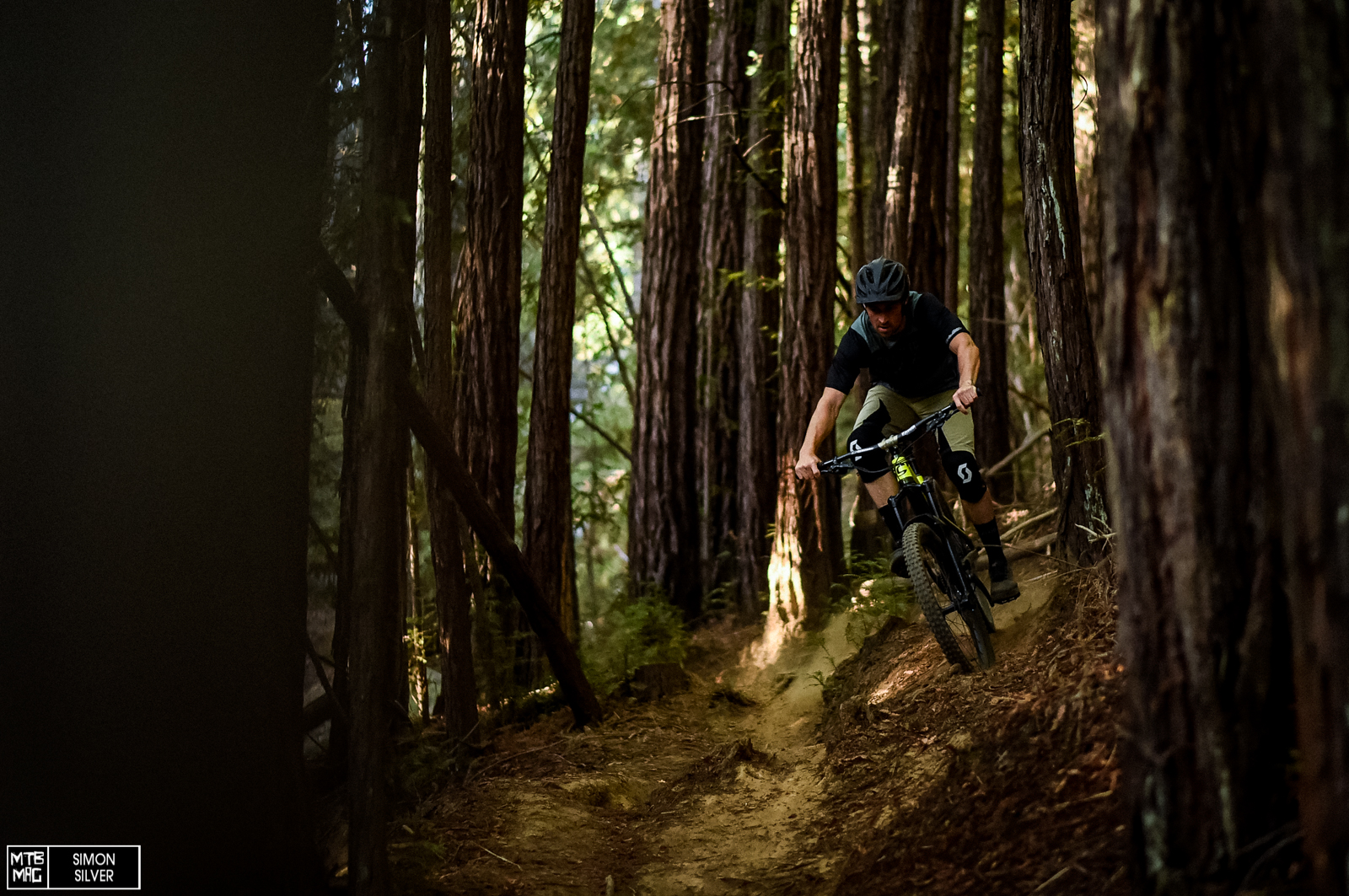 One might ask: Well, doesn’t the ACS3 have some seal friction due to its air sprung bump stop? That’s a good question, but there is a two part retort. First – the bump stop runs at a relatively high volume and low pressures of 5-50 PSI, meaning there’s less seal friction to start, and there’s also no positive/negative air spring equation to balance. Second – the bump stop doesn’t engage until it’s a few inches into its travel (more precisely, 65% of the way in). To be quite frank, on trail, it was very difficult to tell when it was engaging at all. Another advantage to coil springs is how well they manage directional changes. When blasting through mid sized chunder and baby heads, the ACS3 was superior to every air spring configuration that we’ve ridden to date. 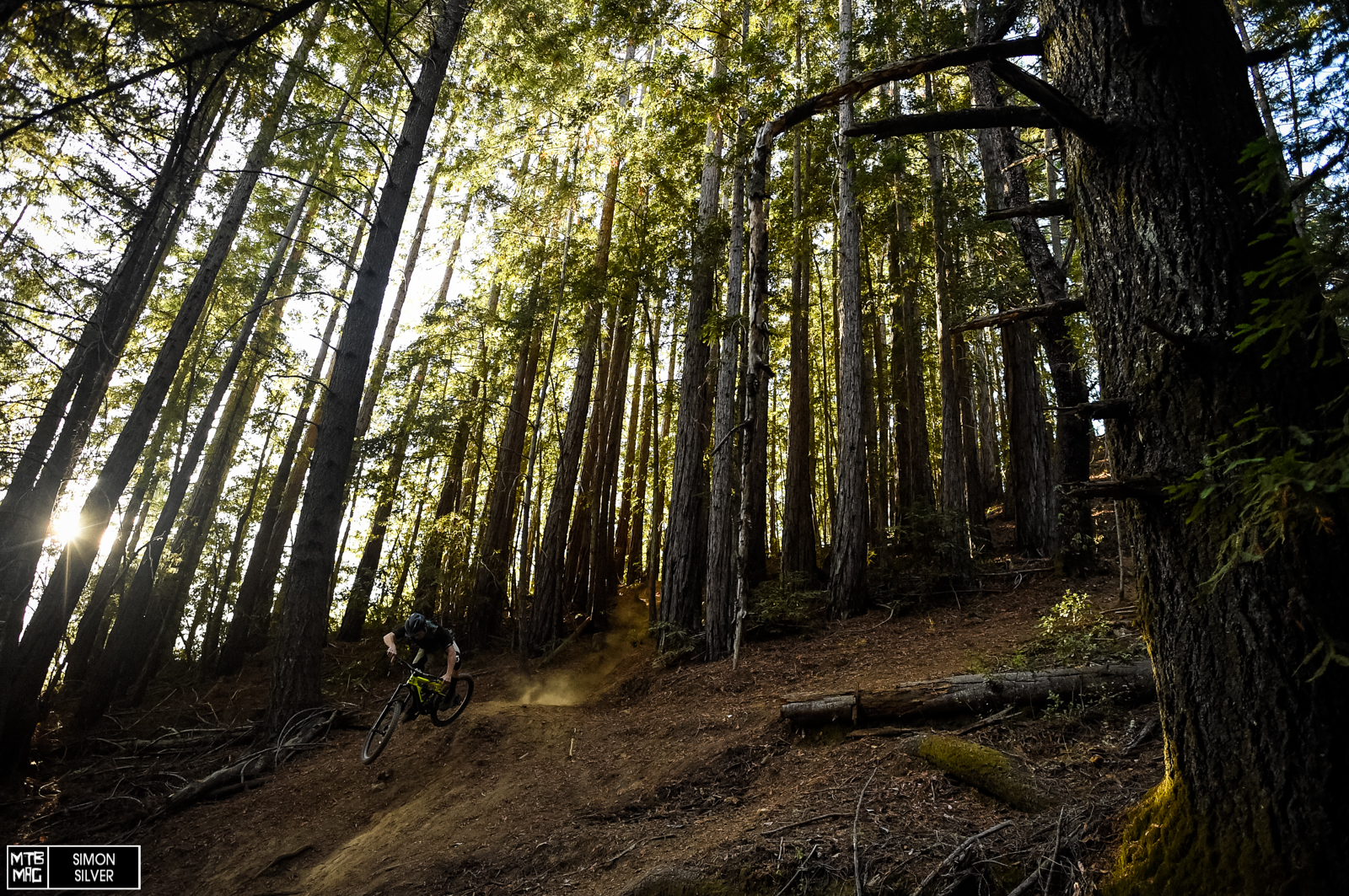 The green spring was just right for our 185 pound tester. The bulk of the trails tested on featured mostly small chatter and big G-outs. Santa Cruz isn’t all that rocky, but if you look, you can find some rough stuff. Anyhow – most of the time we bounced around in the 40-50 PSI range, which might seem high, but it was very helpful in cushioning the violent bottom outs without effecting top end sensitivity. It’s worth noting that for 2019, the Lyrik’s air spring has been massively improved, but for all out traction and feel, we’d still definitely give the nod to the ACS3. With this kit, you lose the option of having complete tunability just a shock pump away, but between the 7 spring rates and the range in the bottom out chamber, it’s not like you’re rendered optionless. Another factor worth considering is that you can buy a second spring for $80, and having a firmer option for jumping and bike park riding wouldn’t be a bad idea.

Sure, the ACS3 is a pricey kit, but it’s brilliantly thought out and beautifully made in America with the absolute best materials for the job. In our estimation the weight penalty is around 325 grams, but it will vary depending on fork model and spring rate. It’s up to you to determine if that’s worth sacrificing, but we think it’s worth it. We see this kit as being attractive to a quite a few types of riders: bike park junkies whose hands need a break, riders who hate tearing down their air forks, and above all, racers looking for an edge. Traction is king in the race world, and coil springs reign supreme in that sphere. Lastly, it’s worth considering that installing an ACS3 and breathing new life into an old fork, along with a good rebuild is cheaper than a buying whole new fork and will ultimately leave you with a better end product.