When we first sought out a test on the Rock Shox Boxxer World Cup our contact at SRAM was eager to have us give the Vivid R2C a shot as well. While we were relatively content with the stock shock on our Scott Gambler at the time, we weren’t exactly floored by it. Long story short, we decided to bolt up the Vivid R2C and give it a go. It isn’t every day that you see one on a Gambler, so why not – right? Something we should point out which makes this test a bit unique is that we first got set up on our 2014 Gambler in August and in late October we transferred it onto our new 2015 Gambler with different kinematics. More on that later… 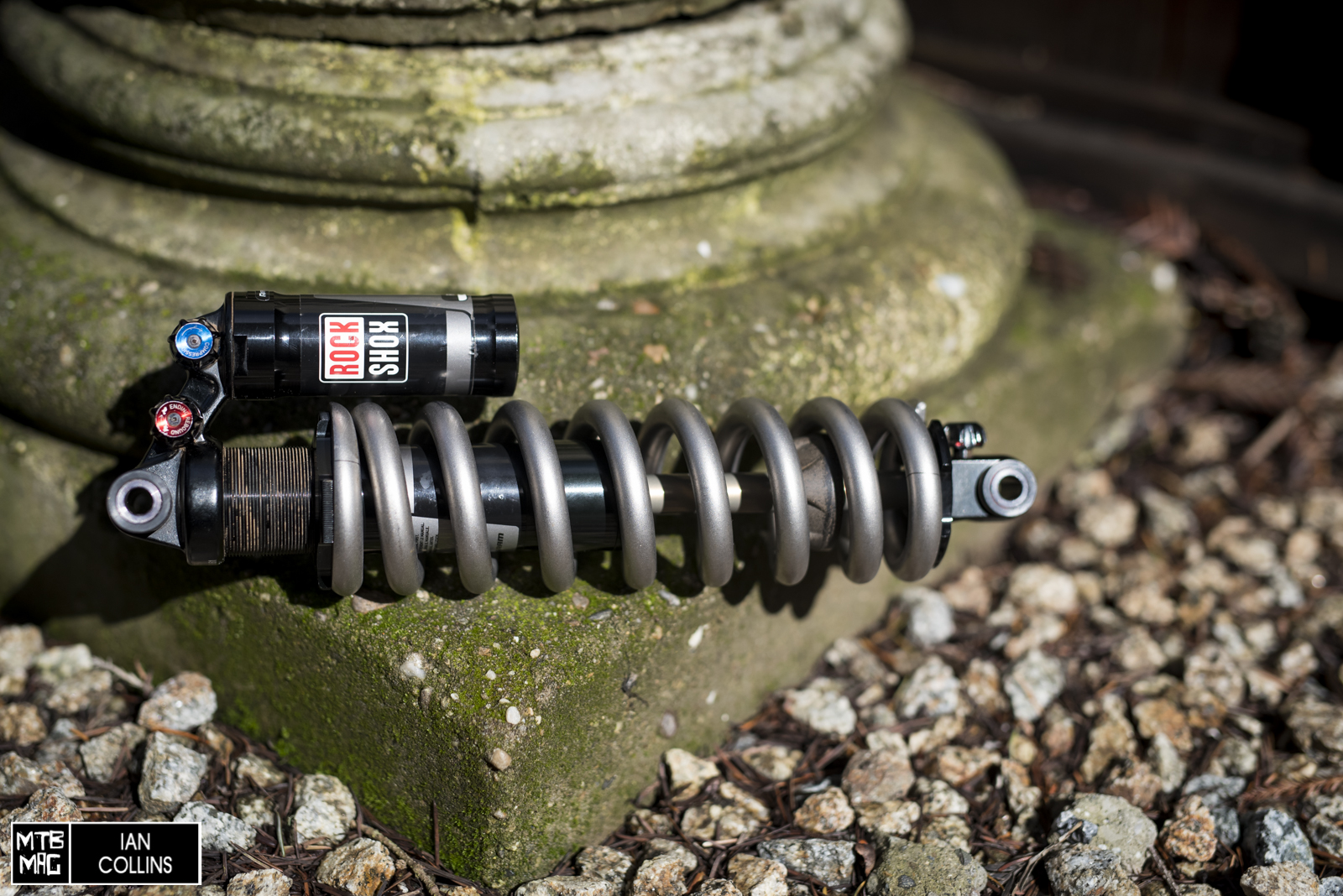 We had the kind folks at Rock Shox dial our bike in while we were at Crankworx Whistler. There couldn’t be a more perfect place to get some side by side comparisons. Out of the gate, we started off with a 400 pound spring and immediately realized that despite feeling really good, we weren’t quite getting full travel. Shortly after we opted for a 350 pound spring and decided that it was the better of the two options. Before we get too deep into the review, it’s worth noting that we ultimately grabbed a 375 pound titanium spring from www.ti-springs.com…That decision had less to do with gram counting and more to do with the fact that we truly felt that splitting the middle of a 350 and 400 would be just right for our 180 pound tester. Unfortunately, no one that we know of manufactures a 375 pound steel spring. At least not one with the 1.5″ inner diameter that the Vivid calls for. 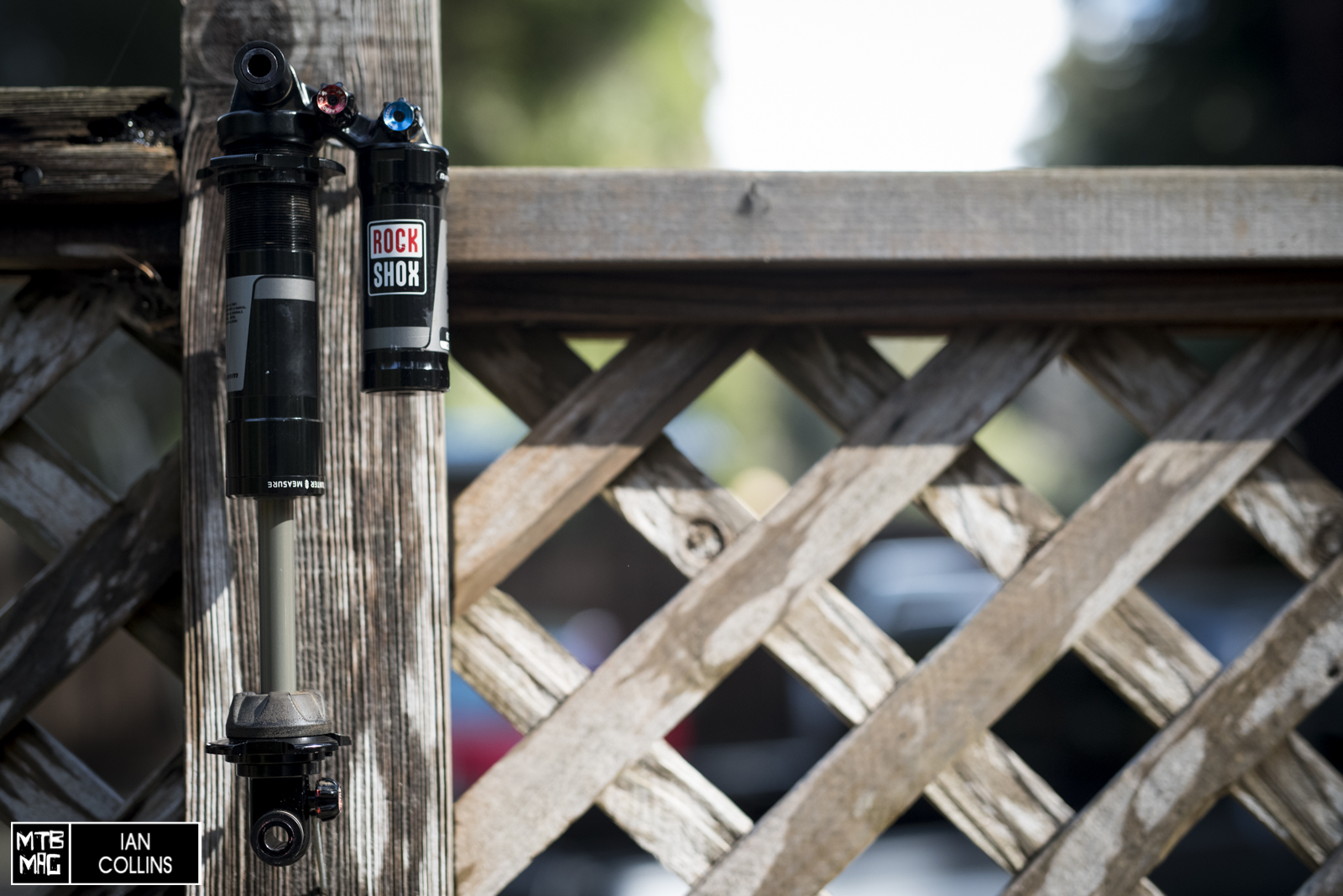 Right out of the gate we spent some time with Duncan Riffle twisting some knobs before hitting the park with him. The Vivid R2C is equipped with an external low speed compression adjustment as well as beginning and ending stroke rebound adjustments. This configuration is a bit unique compared to most other offerings on the market which offer high/low speed compression and just one rebound adjustment. Since it was a bit foreign to us, we took a bit of extra time picking Duncan’s brain during setup. On the compression side of things, the high speed circuit is tuned and set from the factory while the singular low speed compression adjustment can be adjusted externally to help tune the on trail feel. Specifically, if you want the bike to resist dive and wallow a bit more, you can add a couple clicks. If you want a really light trail feel with the most traction possible you can back it out a couple. 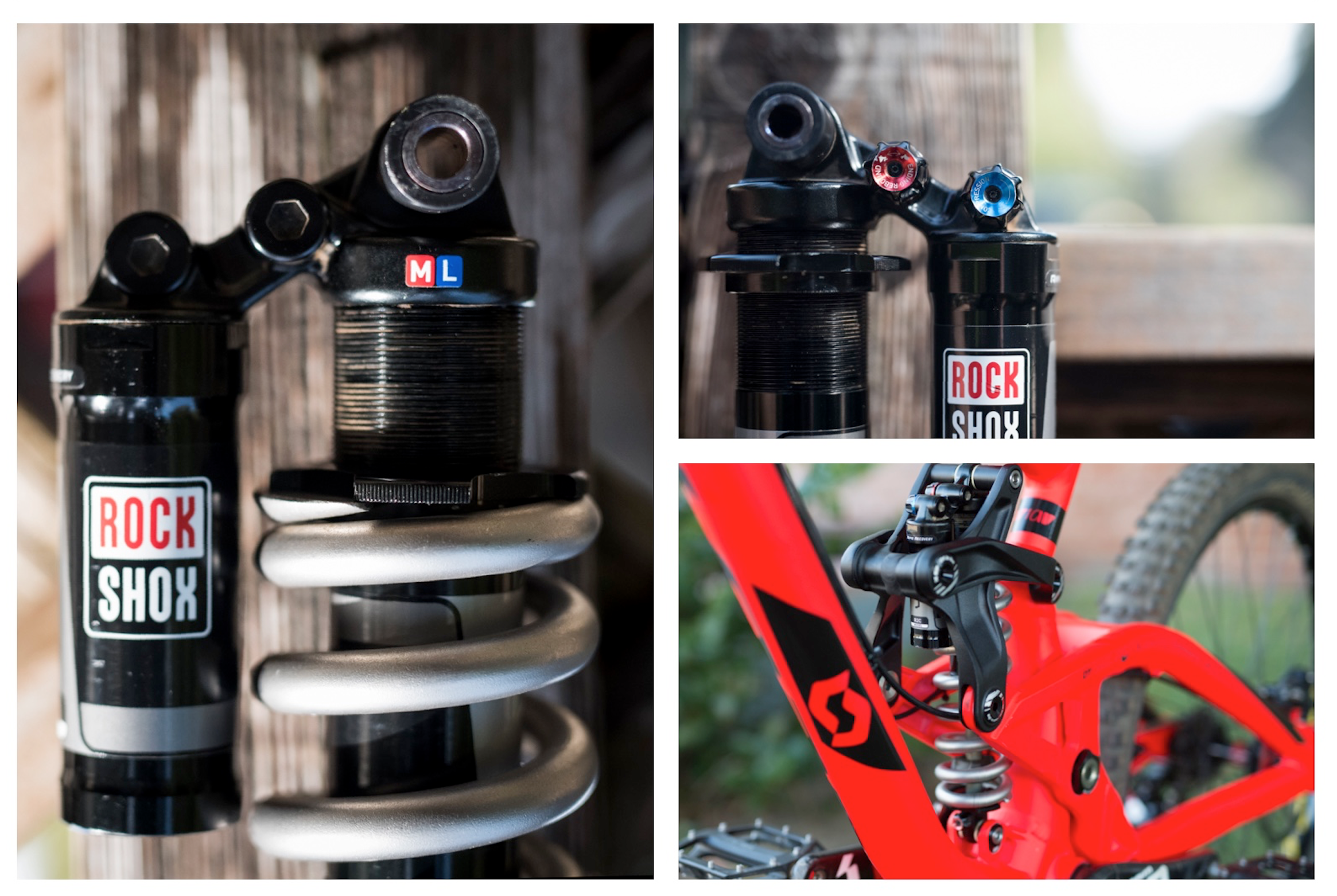 On the rebound side, Rock Shox takes a super unique approach by using beginning and ending stroke options. While that sounded simple enough, the more we thought about it the more it had us in a quandary. In summary, the beginning stroke adjustment meters how light vs. how planted the bike feels in its initial part of the travel, particularly on small chatter. The ending stroke rebound manages mid sized and larger hits such as successive baby heads and harsh landings respectively. Want your bike to feel really open and lively in the rock gardens? Simply run a bit less ending stroke rebound. Want it to feel a bit more planted so you can skip off the top through the rock gardens because you’re hitting it at speed? Then consider running more ending stroke rebound. The same goes for all things deep in the travel : g-outs, harsh landings and other square edged hits. After a fair amount of parking lot fiddling and bouncing around, it was time to see how it rode on the trails 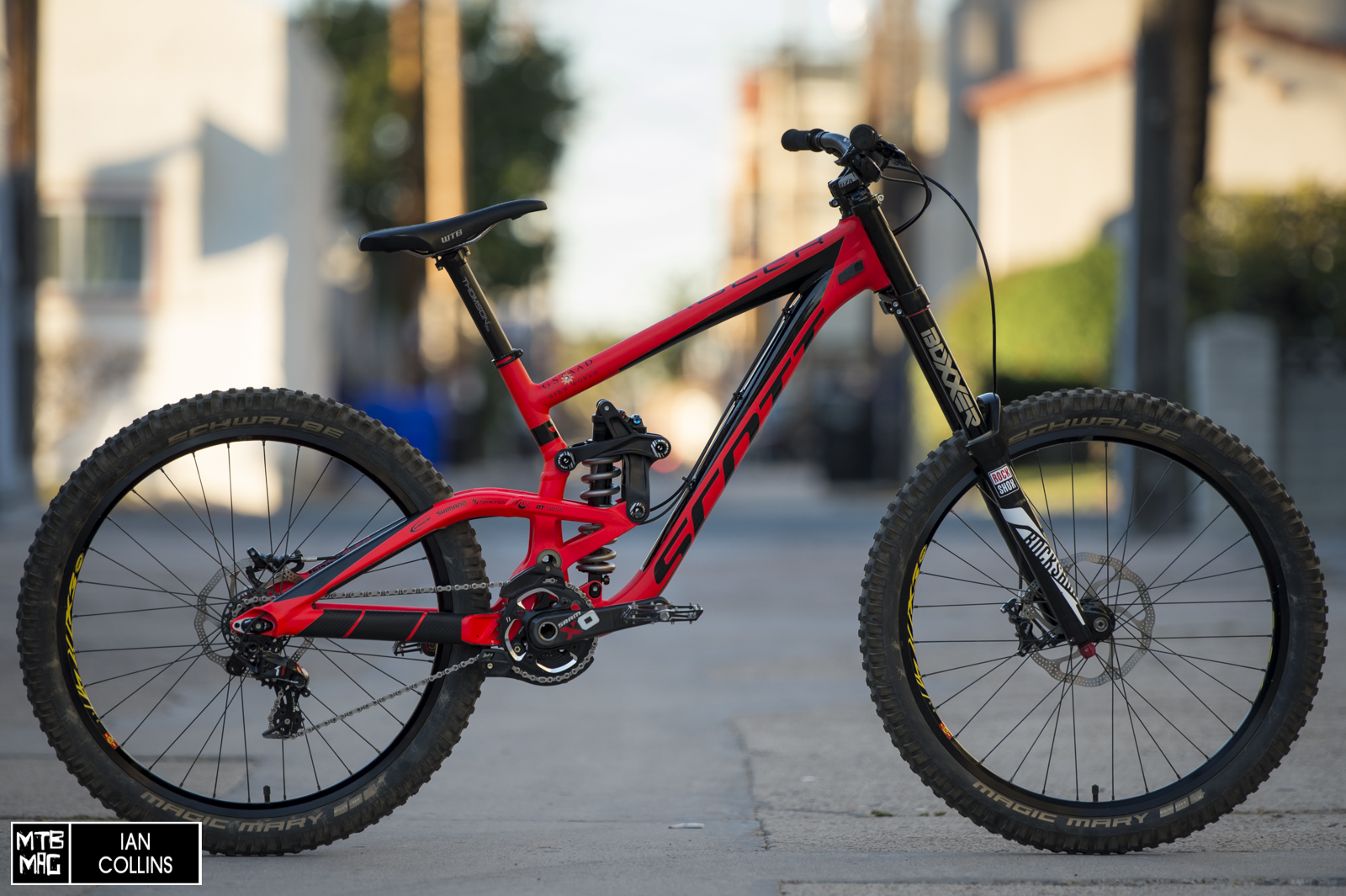 The Vivid R2C as it currently sits on our 2015 Scott Gambler.

The first thing we noticed was that the Vivid R2C definitely gave our Gambler a bit more ramp and progression. We definitely welcomed that as the Gambler is a bit linear in nature and seemed to wallow a bit with the stock rear shock. Another notable difference that we felt straight away was just how light the shock is off the top. This is largely due to “Counter-Measure” – a technology that helps reduce the initial break away force. Rock Shox marketing lingo aside, it definitely works. It felt so light initially that we almost worried it might dive and we could get a bit lost going up the faces of jumps. However, that proved to never be an issue. Once you get into it a bit and push the bike you immediately feel the support. This was an area where our old shock suffered greatly and felt a bit dead and divey. The Vivid R2C opened right up in the roughest bits yet we never had issues with it packing up. The aforementioned additional progression was definitely nice on the bigger hits. Although we used full travel and felt a touch under sprung on the 350 pound spring, it wasn’t all that bad and we never bottomed harshly. 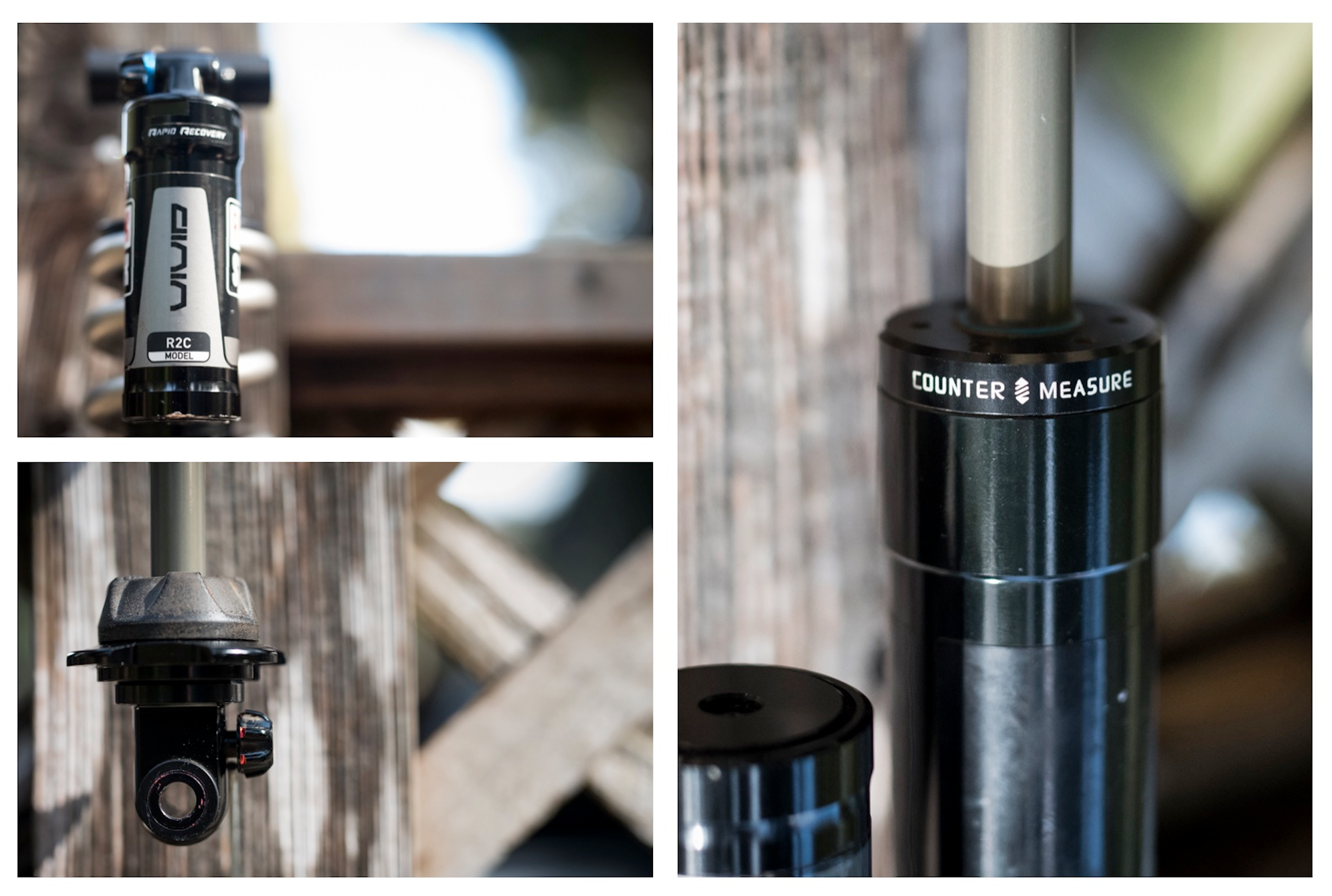 While we admittedly had an initial aversion to the idea of two separate rebound adjustments, we must say that it turned out to be quite an attractive feature, possibly the best part. On really rough tracks we found ourselves setting up the beginning stroke a bit slower and the ending stroke a bit faster. That gave us a planted feel off the top yet gave us gobs of endless travel in the midstroke. Conversely, on the smoother tracks and bike park style trails we did the just the opposite. We set up the beginning stroke to be faster, thus taking the edge off on the braking bumps typically found in bike parks. Setting up the ending stroke up a bit slower felt really consistent on the lips of bigger jumps and helped prevent us from getting bucked.

After a couple of months on our 2014 Gambler we weren’t sure if we’d need to re-tune our Vivid R2C when we jumped onto the new 2015 version of the bike. After speaking with the Gambler’s designer we were informed the bike’s rate had changed a bit and that it may be necessary. He encouraged us to just try the same shock though. With his vote of confidence we did so and found it to perform brilliantly. Apparently the difference in rate must be subtle as we didn’t notice a huge difference.

On both the damping side and the frame design side, suspension will always remain a hot topic that’s greatly subjective and ultimately a very personal thing for most riders. A rear damper can only be as good as the frame it is bolted to and vice versa. Basically, if your frame sucks this may improve your bike but it won’t necessarily turn it into a world class race winning machine.

With that in mind, we found the Vivid R2C to work flawlessly and consistently in a variety of conditions on our bike. It hasn’t shown any signs of wear and tear nor has it revealed any shortcomings. It was sensitive in the small chatter, plowed the mid sized bits incredibly well, all the while offering plenty of mid stroke support. Big hits and miscalculated landings were handled with aplomb and met with seemingly endless travel. The tuning geeks in us would like to see the addition of an external high speed compression adjuster, but we feel that the additional control offered in the rebound adjustments fill the void nicely. We might even venture as far as saying that the option of two rebound adjustments has outshined having two compression adjustments in most real world situations. All in all – 6 months and two bikes later we’re loving this shock and consider it to be a massive upgrade from our stock damper. 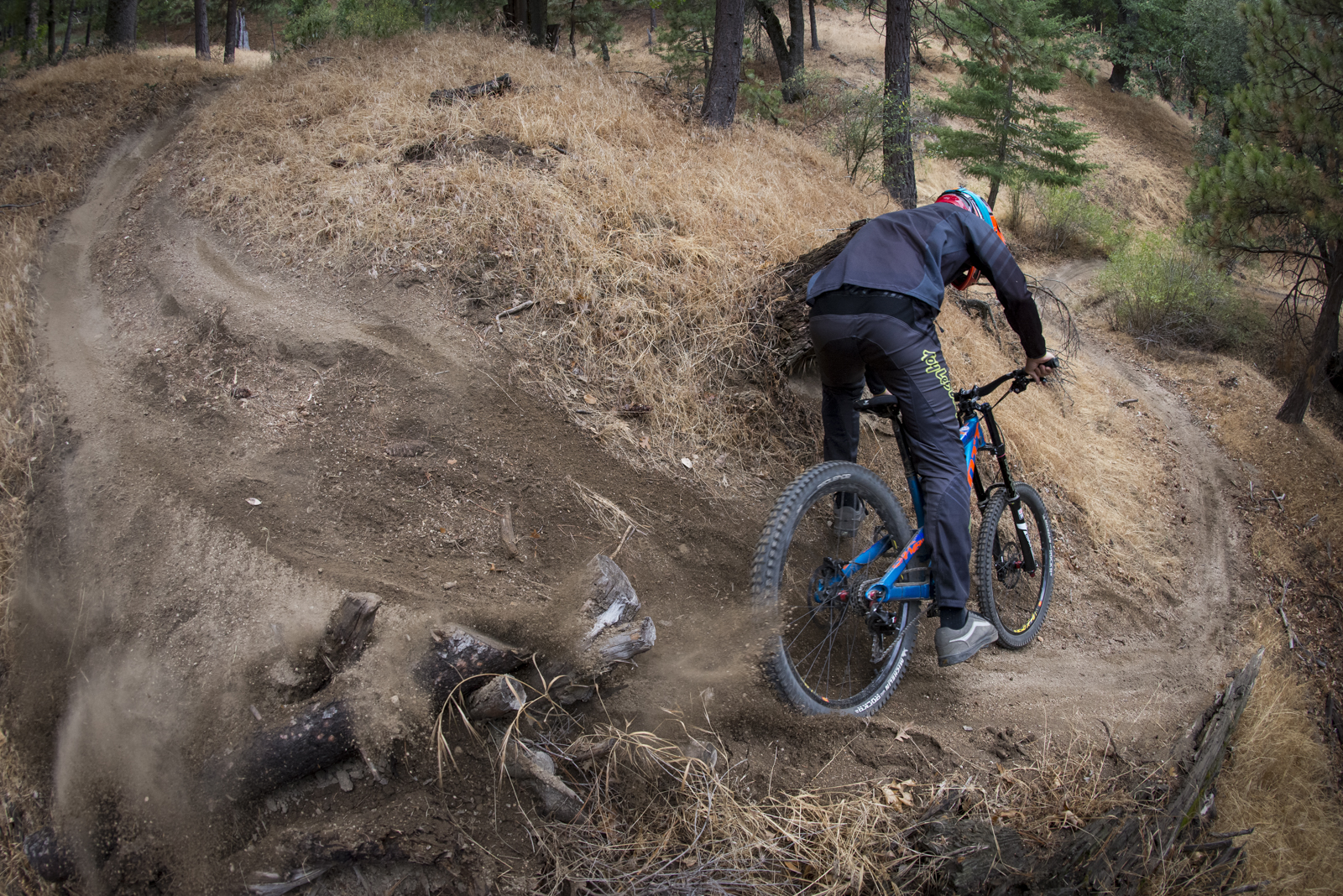 [Video] Tony Hawk On Selling Out