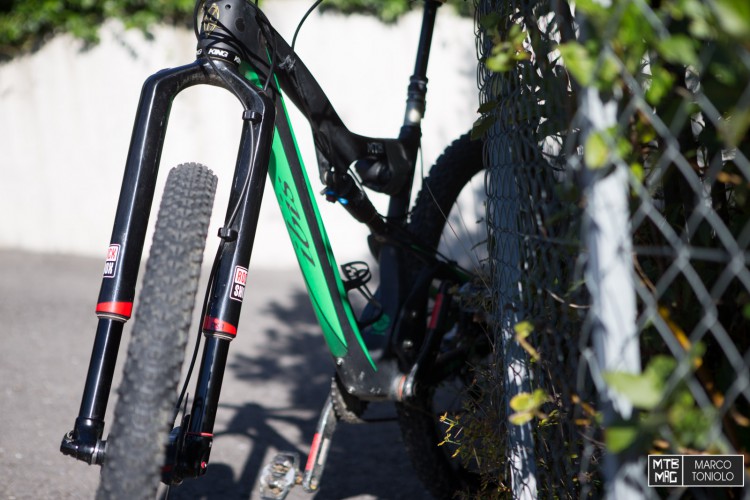 The RS-1 is hands down, the most polarizing fork of 2014: with its inverted design, people either love it or hate it. Trying to put some real technical matters on the plate, we have been testing it for over two months, riding it on a Ibis Ripley, with 120mm travel. The RS-1 is available with three travel settings: 80-100 or 120mm. The tuning can only be done internally, and would be best done by a good mechanic.

Out Of The Box

Whether you like it or not, this full carbon fork (except the lower tubes), especially when combined with a carbon bike frame, will give your bicycle a unique look, giving continuity to the lines of the frame, that seamlessly transitions to the fork. The upper part is one-piece carbon, with a tapered carbon steerer. That necessitates a bit of extra attention when you need to cut it. 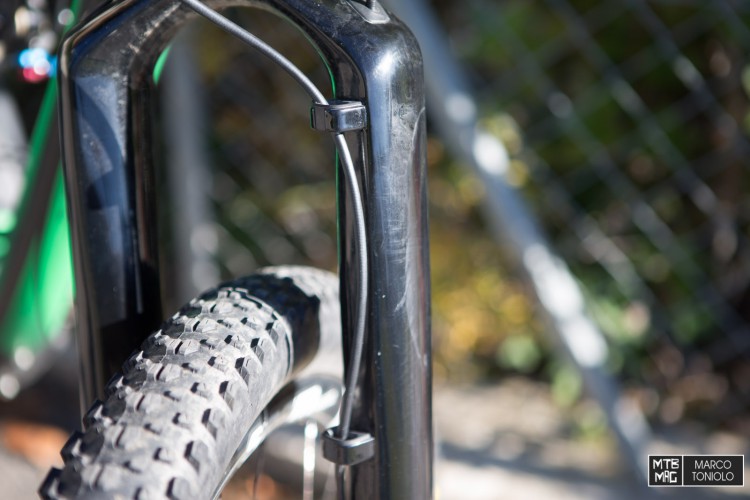 Rock Shox chose carbon as the main material for the upper part of the fork in order to improve its stiffness, as we will see later.

To do the same in the lower part, Rock Shox introduced a new Axle, called predictive Steering. This is a through 27mm axle with a Maxle Ultimate. The hub is also new, not only to fit the 27mm axle, but also because is 3mm wider on each side (total width = 110mm) when compared to a standard hub. This allows wider flanges and a stiffer wheel. 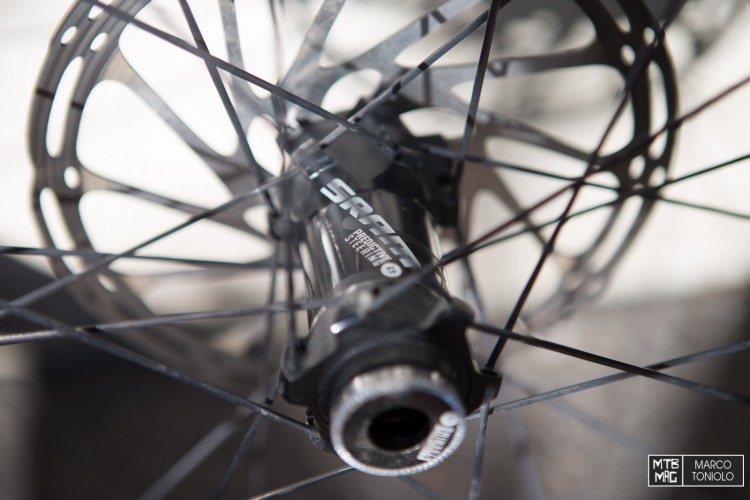 SRAM sells the hub separately, but they sent us a set of Rise 60 carbon wheels together with the RS-1. It was hard to find a non-carbon part on our bike after this set up. 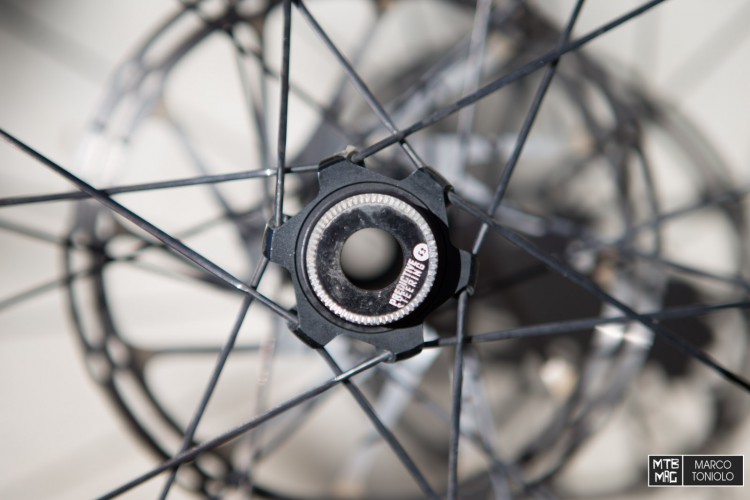 The heart of the RS-1 is the Accelerator damper:
– the air has been eliminated from the damping circuit to ensure consistency.
– Rapid Recovery system, well known from the Pike, to let the fork work mostly in the more sensitive first part of the travel.
– The compression is controlled by the Dig Valve that manages the diving especially on hard hits and braking.
– The lockout, controlled by the XLoc Remote directly on the bar, is very firm.
– Optional Bottom Out Tokens to change the progression curve. 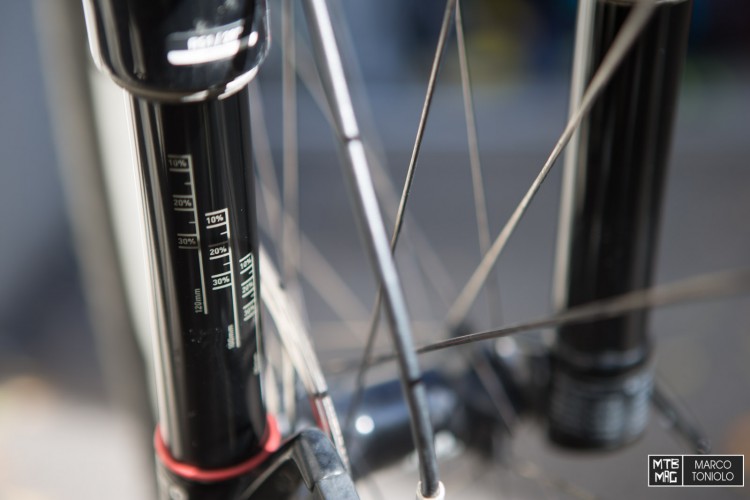 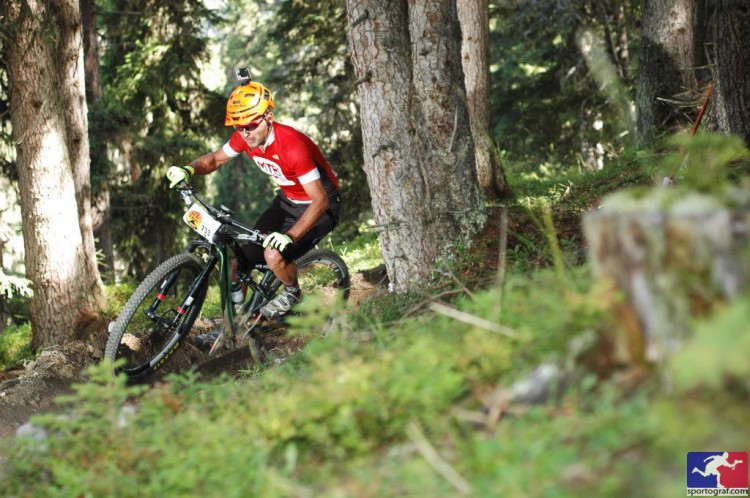 We tested the RS-1 in different conditions, mostly on trail riding in the Alps, including the 6 days stage race Swiss Epic Flow. The racing part was very important, because we tried to ride the fork as hard as possible, knowing that many readers would ask “Didn’t you scratch the stanchions?”. The answers is: “No!”. And we can say we have been riding on very rocky terrain, with one major crash. We scratched the upper part, as you can see from the photo above, we scratched the frame with rocks that have been smashed in the air by the front tire but no, the stanchions are still like new. With regards to the damping, obviously the RS-1 is targeted at cross country riders: it’s not as plush as the Pike, you can literally feel that “racing” tuning that keeps the fork high in its travel, still being small bump sensitive and very capable on big impacts.

The big advantage of an inverted fork is certainly the fact that the lubrication oil is always in the right place, not going down and letting the bushings and seals dry up if you don’t put regularly your bike upside down in the garage. This means that the RS-1 reaches very high levels of sensitivity, bringing a little of the Pike to the XC segment. When we first received the RS-1 there was no Bottom Out Token inside, and the compression curve was way too soft in the mid stroke. After putting one Token the fork felt more progressive and predictable. It’s quite easy to do that, if you have the proper tool to open the RS-1. With 10-15 bars less than indicated by Rock Shox the RS-1 felt perfect: sensitive at the beginning of the stroke, progressive at its end. In terms of stiffness, we have to separate torsional stiffness from the structural stiffness of the fork:

1) when braking, the RS-1 is probably the stiffest single crown fork we have ever tested. The “vertical” stiffness of the carbon upper part is amazing and we appreciated it especially when hitting  a tight turn coming from a high speed section: the bike felt extremely precise.

2) Torsionally speaking, the RS-1 does not reach the stiffness of a traditional fork with a 15mm axle. The laboratory tests of Bike Magazin (Germany) confirmed our impressions. You have to think that the two lower tubes are independent from one another until the Predictive Steering axle is closed.  Still, on the trail we weren’t feeling the lower stiffness as a negative factor. Better yet: it’s hard to feel it at all. Laboratory numbers are one thing, but actually going out and riding on rough terrain is another thing. It’s out on the trail where there are so many variables that it becomes really hard even for an experienced rider to feel a little stiffness more or less. Especially on 29ers wheels, which aren’t exactly known for their stiffness. 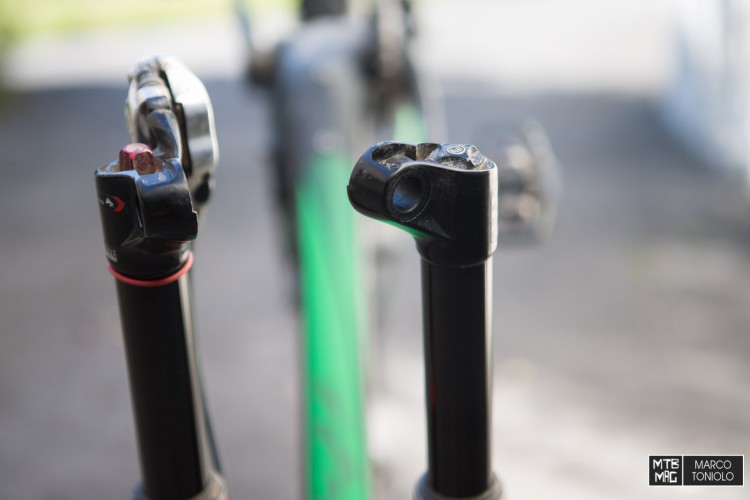 The “independent” lower tubes make the front wheel mounting a little more complicated than normal, especially when you are trying to do that without putting your bike upside down. The middle arch that “stops” the wheel from going too high is missing, and you have to line up perfectly the two holes of the lower tubes to let the axel go through. After some practice though we got used to this and we became much faster in the operation.

We loved the remote lockout. Not only to lock the fork on paved uphills, but also to put as much power as possible on the ground when, for example, pedaling after a slow turn. What we did not like is the logic of the remote: if the button is pushed down the fork is open and working, if not it is locked. We found ourselves with a locked out fork after some walk-your-bike sections, when we touched the remote without knowing it. To us, it would make more sense the other way around. We ran 10 Psi less than what rock Shox wrote on the right lower tube. These became 15 psi less when we added a Token. With only 120mm of travel we found ourselves charging it on trails that normally we would have not been riding with a XC fork. The RS-1 is extremely capable and precise, when it comes the stiffness you need when approaching a turn at full speed and power braking to get the right line. Torsionally there are stiffer forks out there on paper, but on the trail it’s hard to even notice a difference.

The bottom line is that this is not a product for everybody: its price tag, its design and the proprietary hub will be the center of many discussions with your riding buddies. Until they get one to ride for themselves.

EXT Enters the World of forks with ERA