When SRAM introduced the Guide, it was a benchmark in consistency in more ways than one. In terms of power, modulation, and ease of bleeding, it was the most consistent brake that the brand had ever engineered. The Guide saw minor, but key revisions not long after their initial release with the S4 caliper…“Bleeding Edge” technology made for snappier bleeds but perhaps more importantly, “Heat Shield” notably improve the power under hot, heavy braking. 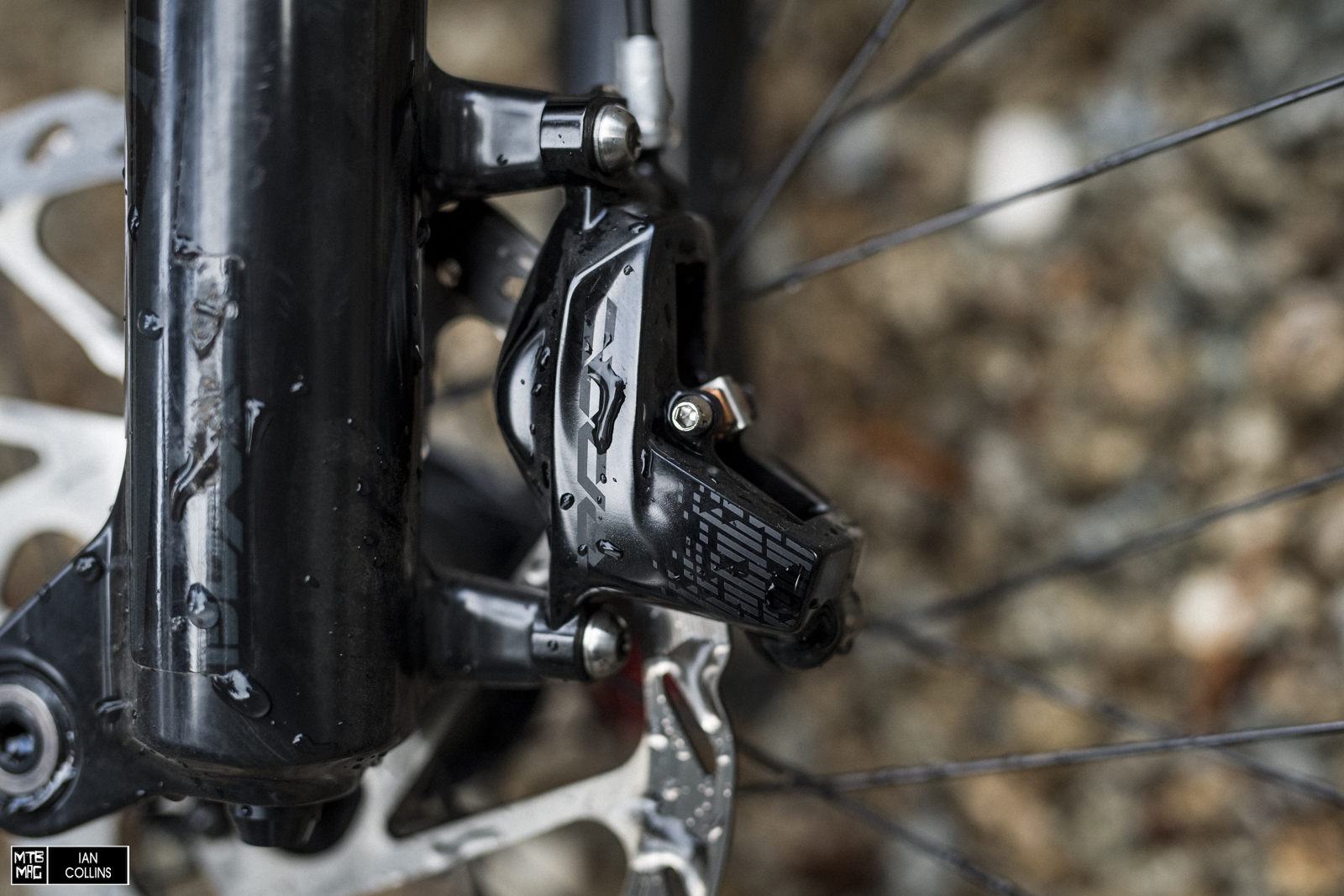 The last iteration of the SRAM Code had a long, successful cycle on the market – it won World Championships and World Cups in the gravity world and with the brake’s fantastic reputation, SRAM wasn’t in a hurry to phase them out. Instead, they took what they learned from developing the Guide brake and implemented those concepts into the new and improved Code. We started testing the Code RSC a couple of weeks before their official release (~6 months ago) and have been riding them as much as possible ever since. Read on for the full review…

We alluded to this earlier, but to be clear: the new Codes are a complete overhaul of their last design, so nothing carries over. Think of this brake like a Guide on steroids – you can read up on the Guide brake here, but in short Codes have 15% more power. This is partly due to the fact that one pair of the four pistons have increased from 14mm to 15mm in diameter. Additionally, Codes use 30% more hydraulic fluid and have a substantially larger master cylinder in the brake lever. Shortly before the updated Codes came out, racers and consumers alike were mixing and matching Guide levers and Code calipers. It’s important to note that this is no longer a possibility, but since the updated brake lever uses the best parts of a Guide lever there really is no reason to mix and match anyway.

SRAM have ditched their “Tri-Align CPS hardware” in lieu of a low profile T25 Torx screw and washer, and we feel it’s an improvement. As standards and manufacturing processes improve while tolerances get tighter all across the bike world, we no longer need the crutch of concave/convex washer combinations to align our calipers with their rotors. 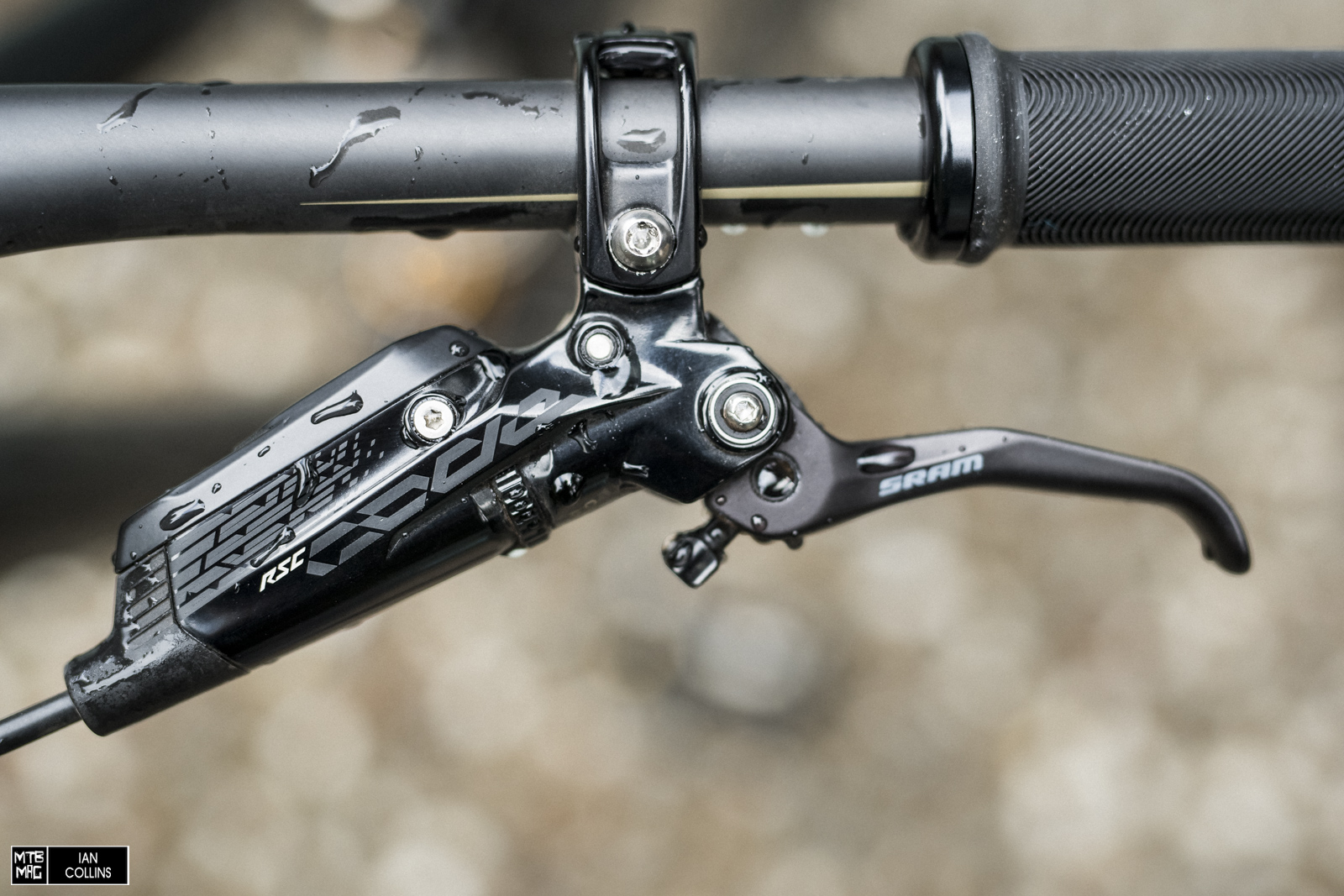 We tested the flagship Guide RSC which has external adjustments for lever reach and brake pad contact point adjustment (aka lever throw). Both of these adjustments are quite nice, but if you’re on a budget, perhaps consider the Code R. It comes in at $90 less per wheel and has many of the same features, but forgoes the lever throw adjustment, stainless hardware and a few other minor details (note: you can still adjust reach). One of our editors is currently testing them on a “budget spec’d” bike and loving them.

To no major surprise, the install was painless. Our Code RSC brakes came pre-bled and had plenty of extra hose length to get along with even the most bizarre cable routings. We mounted them up to our size XL Rocky Mountain Maiden without any issues. The brakes arrive with extra hardware so that when you trim the hose(s), you won’t be left high and dry. On both brakes we were able to cut down the excess length and reconnect the hose to the lever without having to perform a bleed. Perhaps we’ll publish a tutorial on that process in the future. 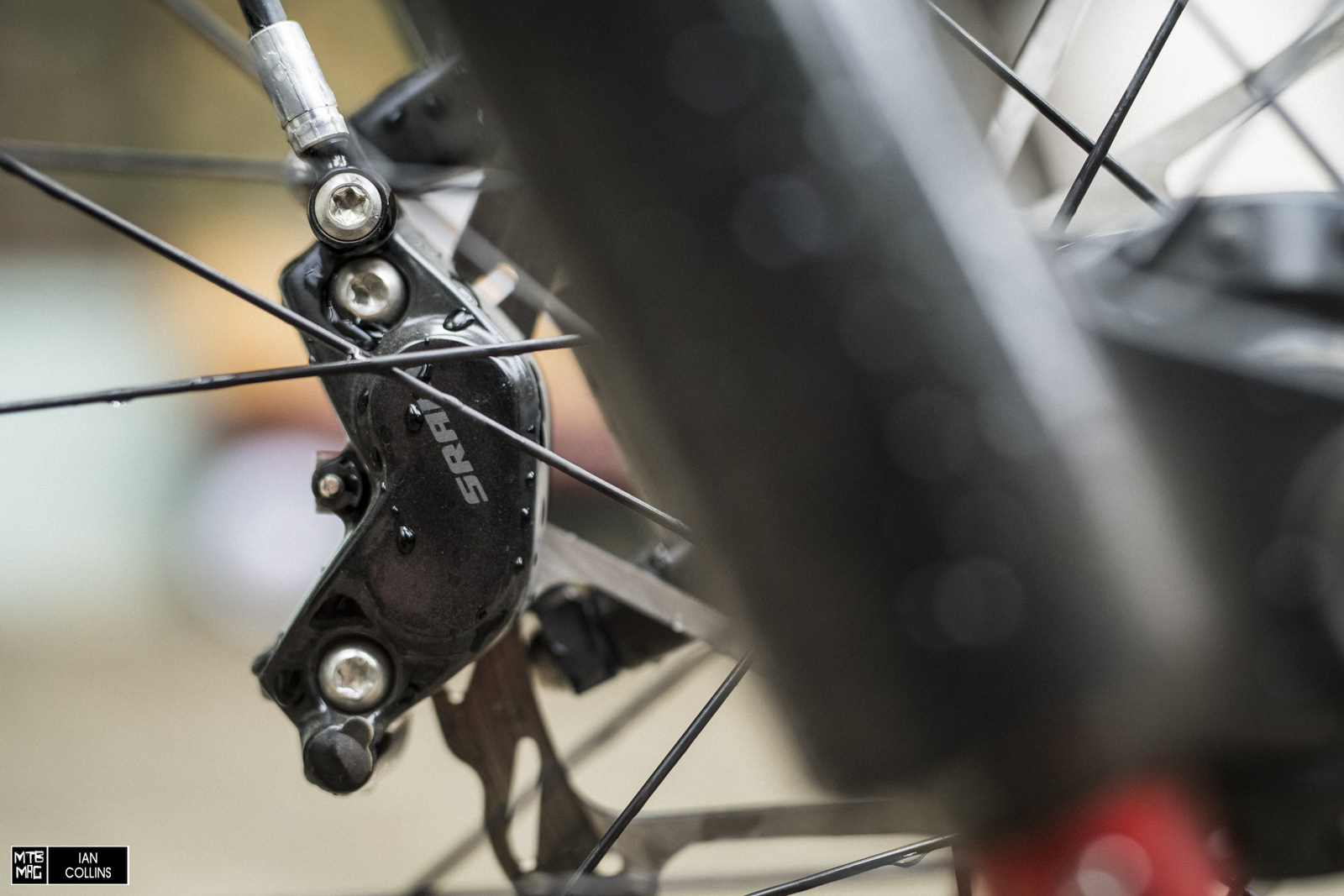 The simplified caliper mounting hardware was warmly welcomed and the brakes aligned themselves just fine upon install without rubbing. From an ergonomic standpoint, we felt right at home with the levers – this should come as no surprise since they feature the same lever blades as the Guide brakes.

After just a few turns down the hill on our first lap, the Code RSC brakes had already burned in nicely. Compared to Shimano Saints or the last iteration of the Codes, we quickly noticed improved modulation. The new Codes have less of an ON or OFF feel, but that’s not to say the power isn’t there; it’s just easier to manage on the trail. Basically, you won’t ever have too much bite when you’re just trying to scrub a little speed. Additionally, when you’re on the brakes and feathering – pulling a touch harder provides the extra stopping power you’re looking for with very intuitive delivery.

On long, steep descents with loads of braking we never once noticed any sort of fade or felt that the power diminished. We opted for a 200mm front/180mm rear rotor combination, but those individuals racing DH or looking for more may opt for 200mm front and rear. While we didn’t really have a chance to explore the option, the brakes offered so much power that we pondered the idea of running a 180/160mm combo on enduro bikes with Codes. Currently we’re quite content with 200/180mm rotors paired with Guide RSC and we think the difference in weight would come out in the wash though. 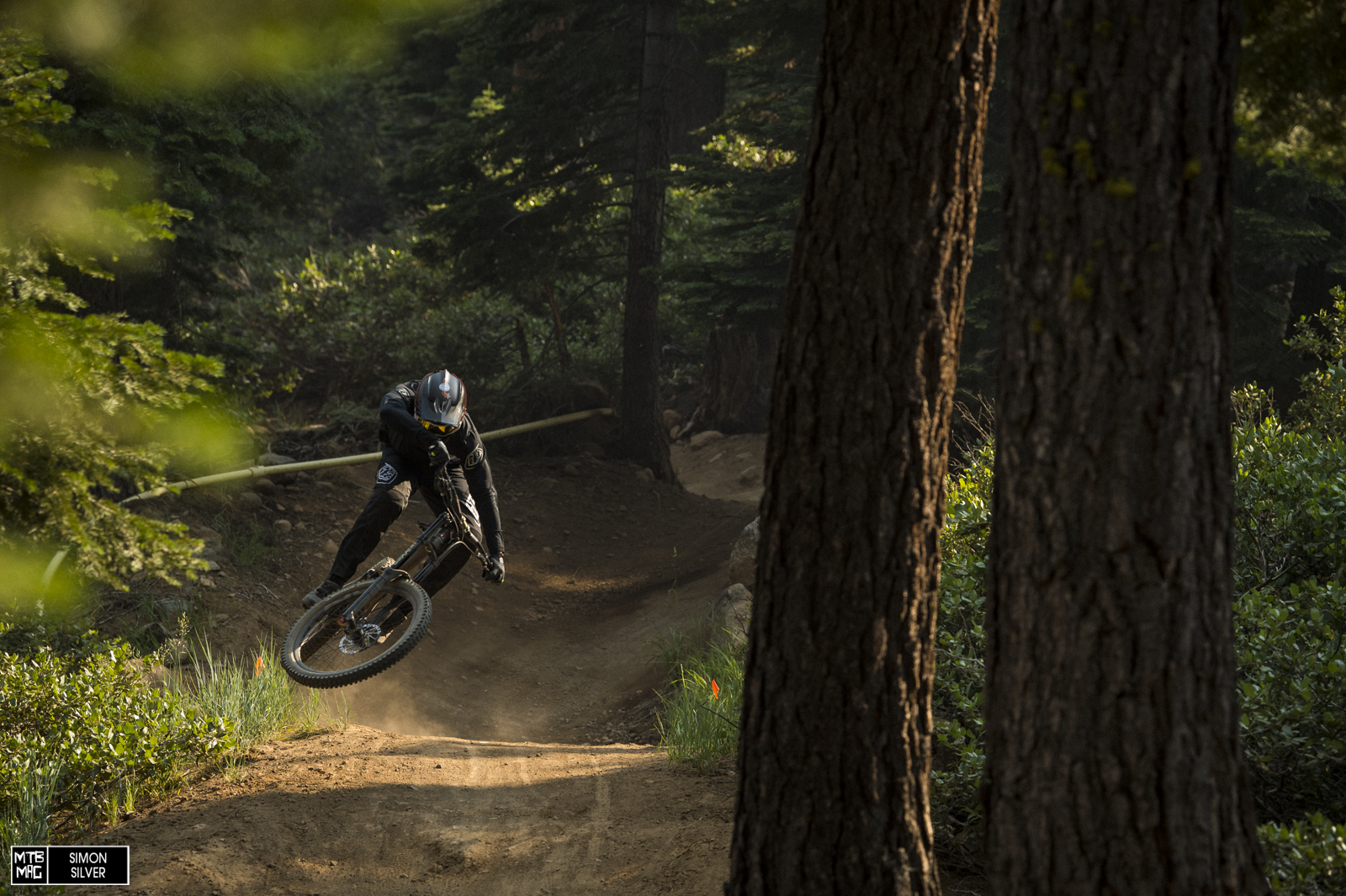 In terms of durability, we’ve not yet pushed these to the point that they show signs of needing a bleed, although it’s best to do so as recommended by SRAM based off of frequency of usage. We’ve had no issues with sticky pistons or dragging pads and the brake pads themselves have worn quite nicely. The detents on the lever adjustments are crisp and clear and have never once gotten mucked up despite mixed conditions and multiple hosings. All in all, nothing has tipped us off that the Code RSC have any sort of shortcomings. If we had to dig for something to complain about, there was an occasional, intermittent bit of noise in the beginning of a run. However, the noise was fairly subtle and would always subside after a few taps of the brake.

Simply put, think of the new Codes as the Guides’ big brother; they have the same feel and all of the features that made the Guide such a breakthrough for SRAM, but in a more powerful package. Compared to past models, we feel the modulation is significantly improved without sacrificing power. With simplified hardware and improved lever adjustments, the functionality of the Code RSC has proven to be top notch. The wear and durability has been excellent throughout our time of testing, and at $244/wheel the overall value is good. That said, if you’re looking to save a few bucks to help pay for some lift passes, it’d be foolish to turn your nose up at the Code R. One thing is certain, from XC to DH and everything in between, SRAM has made huge improvements to their brakes in a short couple of years.

[Teaser] North of Nightfall – Zink/Storch/Claw/TVS in the Arctic