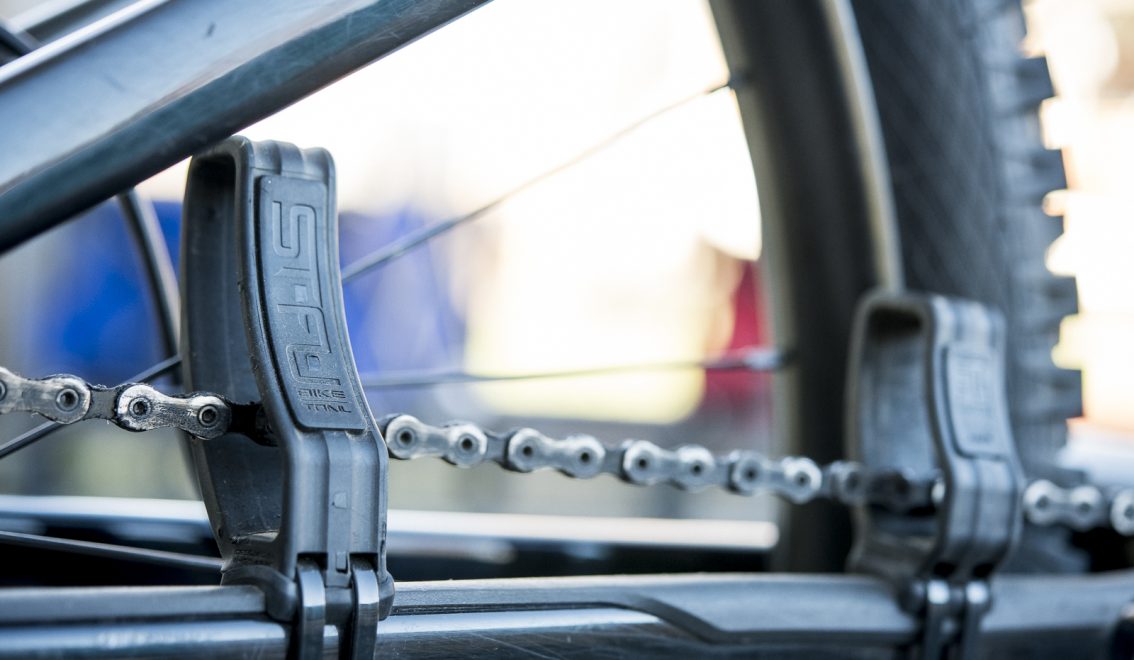 Retired World Cup downhill racing legend turned Whistler local, Chris Kovarik really hates chain slap, and noisy bikes in general – enough so that he started STFU Bike after partnering with mechanical engineer and long time friend Jaan Hurditch. A while back STFU inquired about reviewing their chain damper, which was something that I’d already been quite curious about for some time now, so of course I obliged. The simple two piece design zip ties onto your chainstay and after roughly a 5 minute install, its dual compound bits completely encase your chain and prevent it from making a racket while you carry on with your bike related activities. Read on to see how it’s been working out… 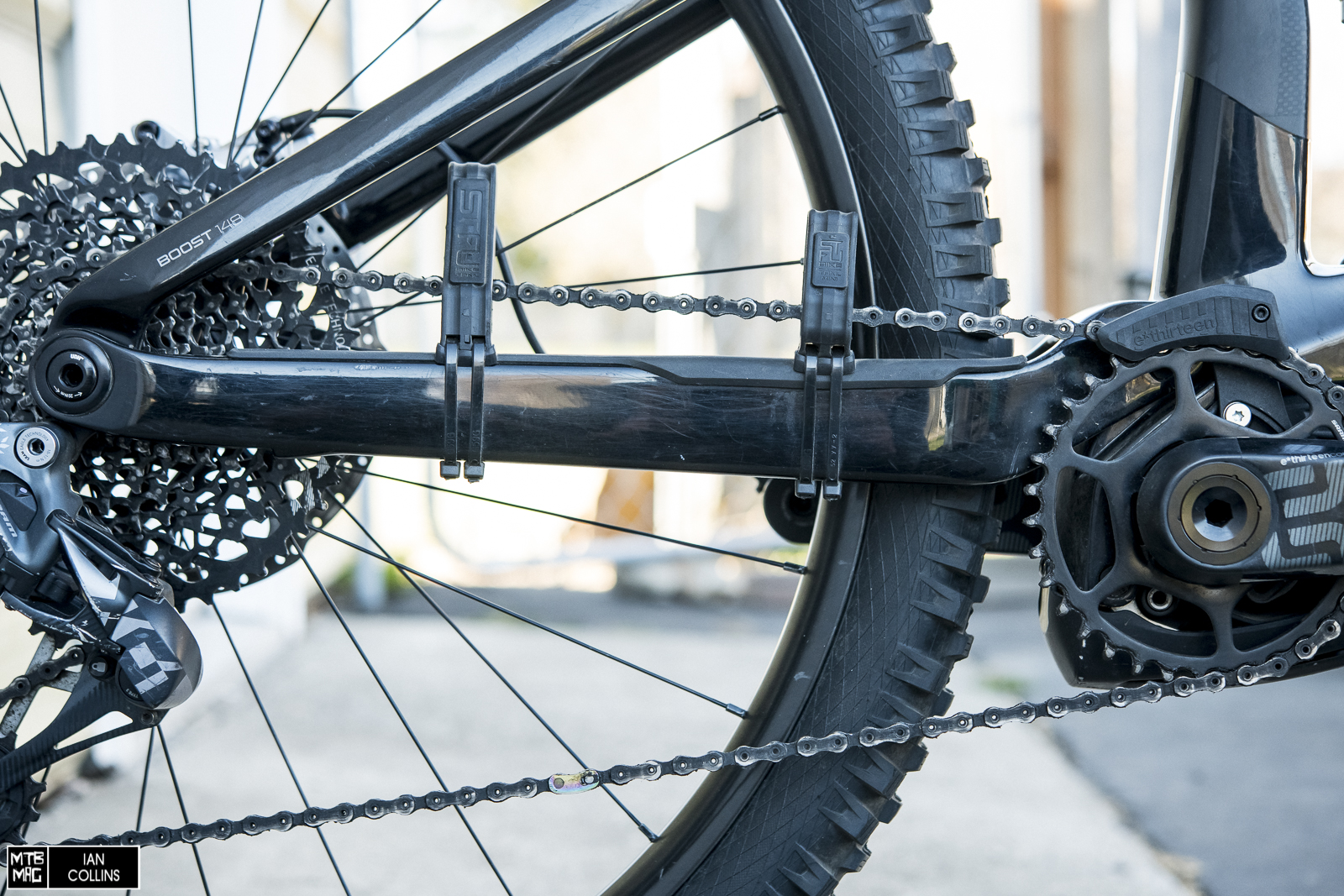 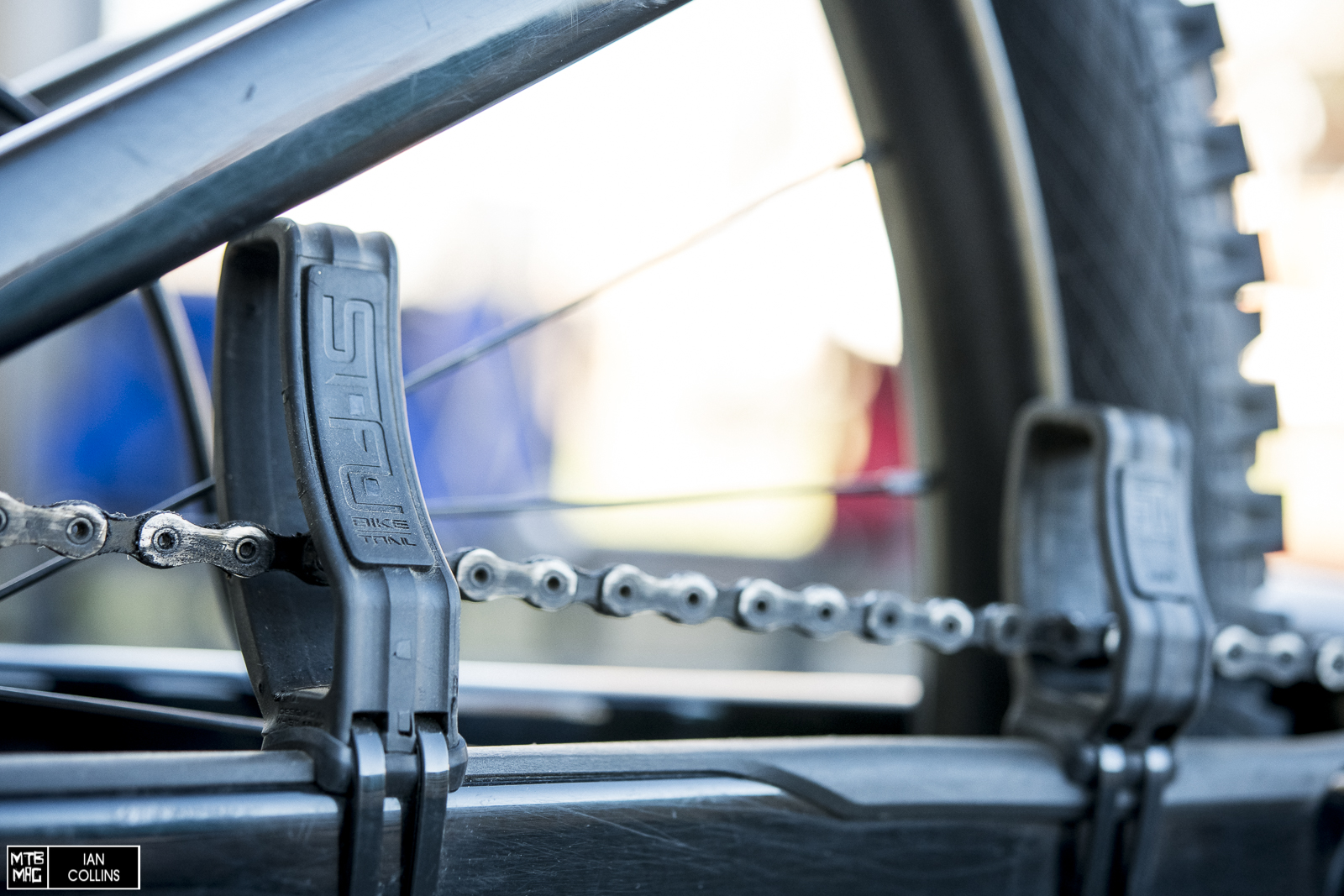 The installation requires a measuring tape, a razor, 4 zip ties and a chain breaker. You evenly space the two dampers out between your bottom bracket and rear axle. There is guidance for how far down you’ll need to cut down the height adjustment. In my case, as you can see above, it was necessary to cut them all the way down. 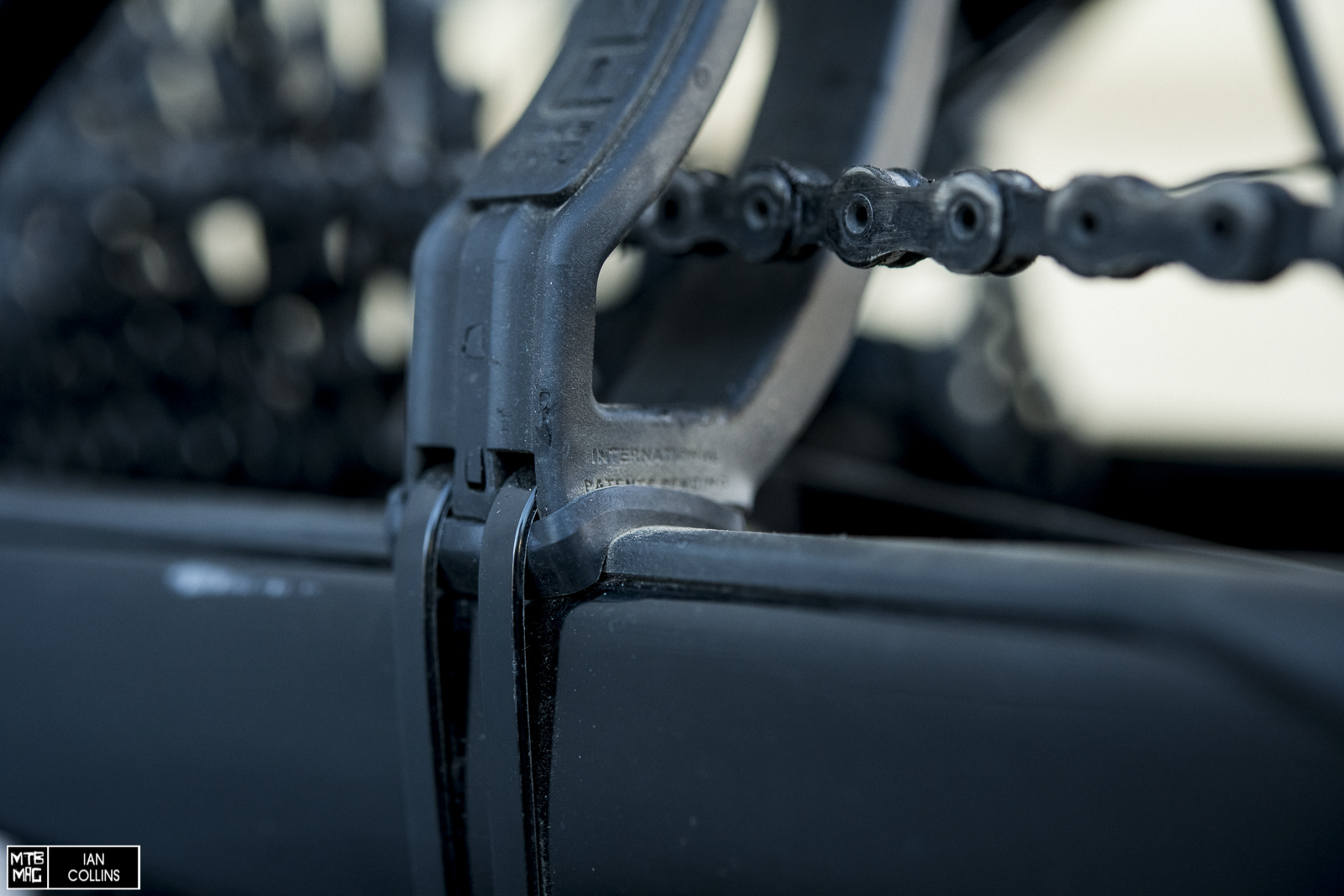 There are multiple rubber fitments for difference chainstay profiles – rounded and square – which lock into the guide blocks. This helps prevent slipping and ensure you can snug the zip ties down nice and firm. 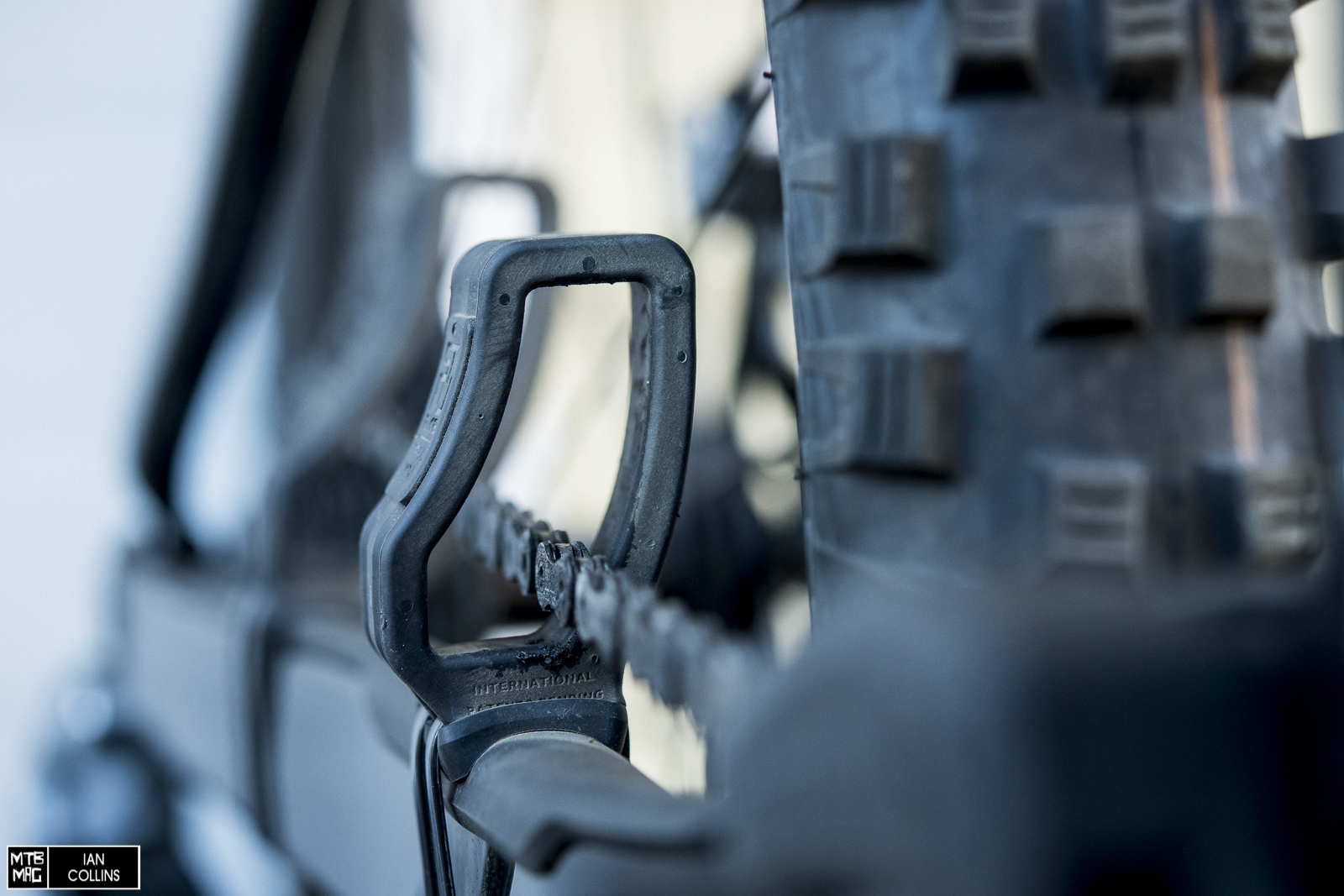 There are chain dampers available for everything from single speed to 7 and 10 speed downhill as well as full range trail. In the case of the trail damper that I tested, the forward damper is substantially smaller relative to the rearward as it sees less change in height, being further from the cassette. 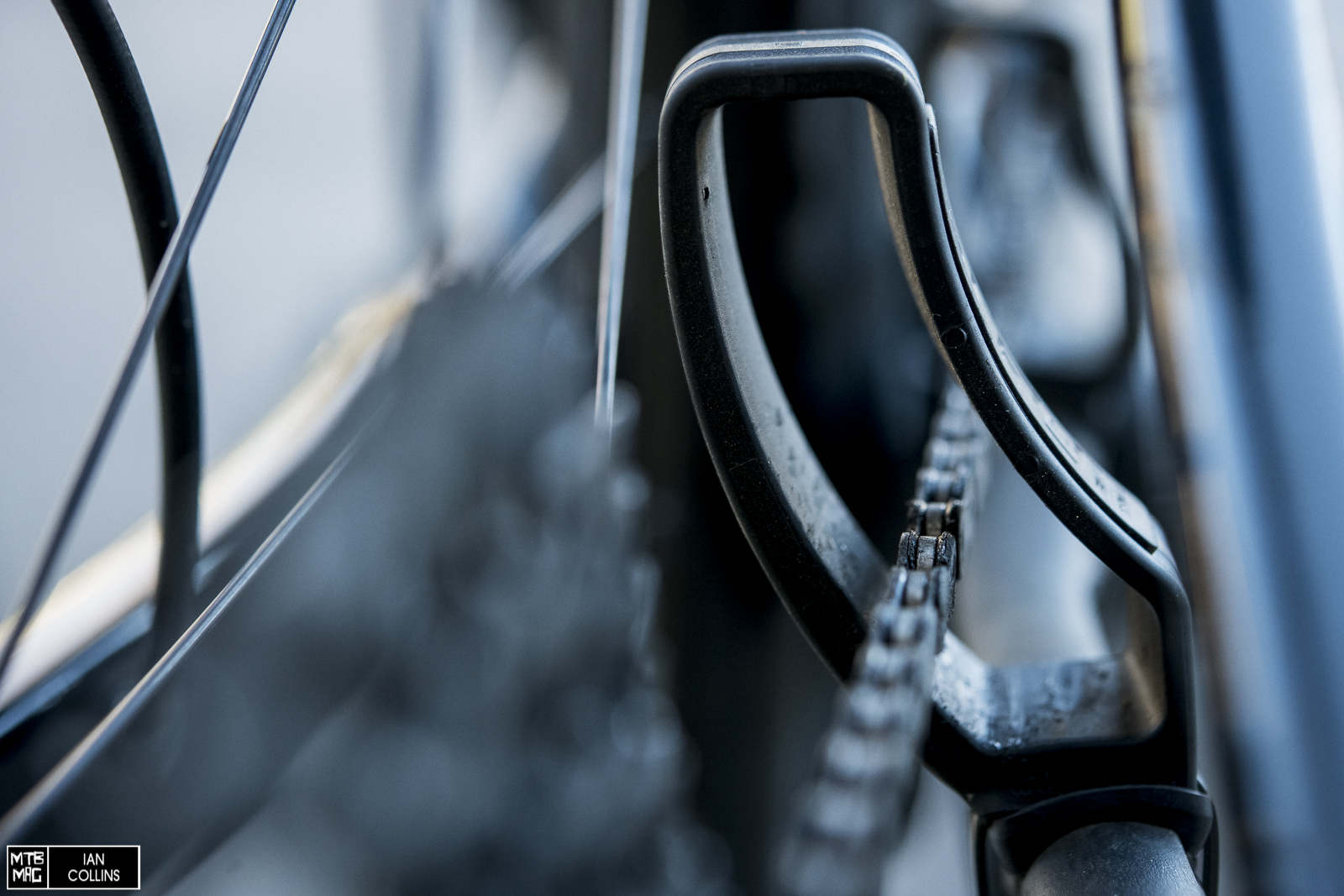 The curved design works in such a way that regardless of which gear you are in, there is no static drag since the chain doesn’t contact the damper when pedaling – rather, only during chainslap…

So far, I’ve been riding the STFU on both my e-bike and my pedal bike. If you’re even remotely mechanically competent, the ~five minute installation is a breeze. The guide blocks are designed in a way that they will accommodate a wide range of suspension designs rather easily. STFU have done a painstakingly thorough job of working an element of universality into the design, so props to them for that. The dual compound layout is a logical approach as the hard plastic skeleton provides structure to the dampers, while the rubber outer section helps to keep the inevitable contact with the chain (during slapping) from making any excess noise. 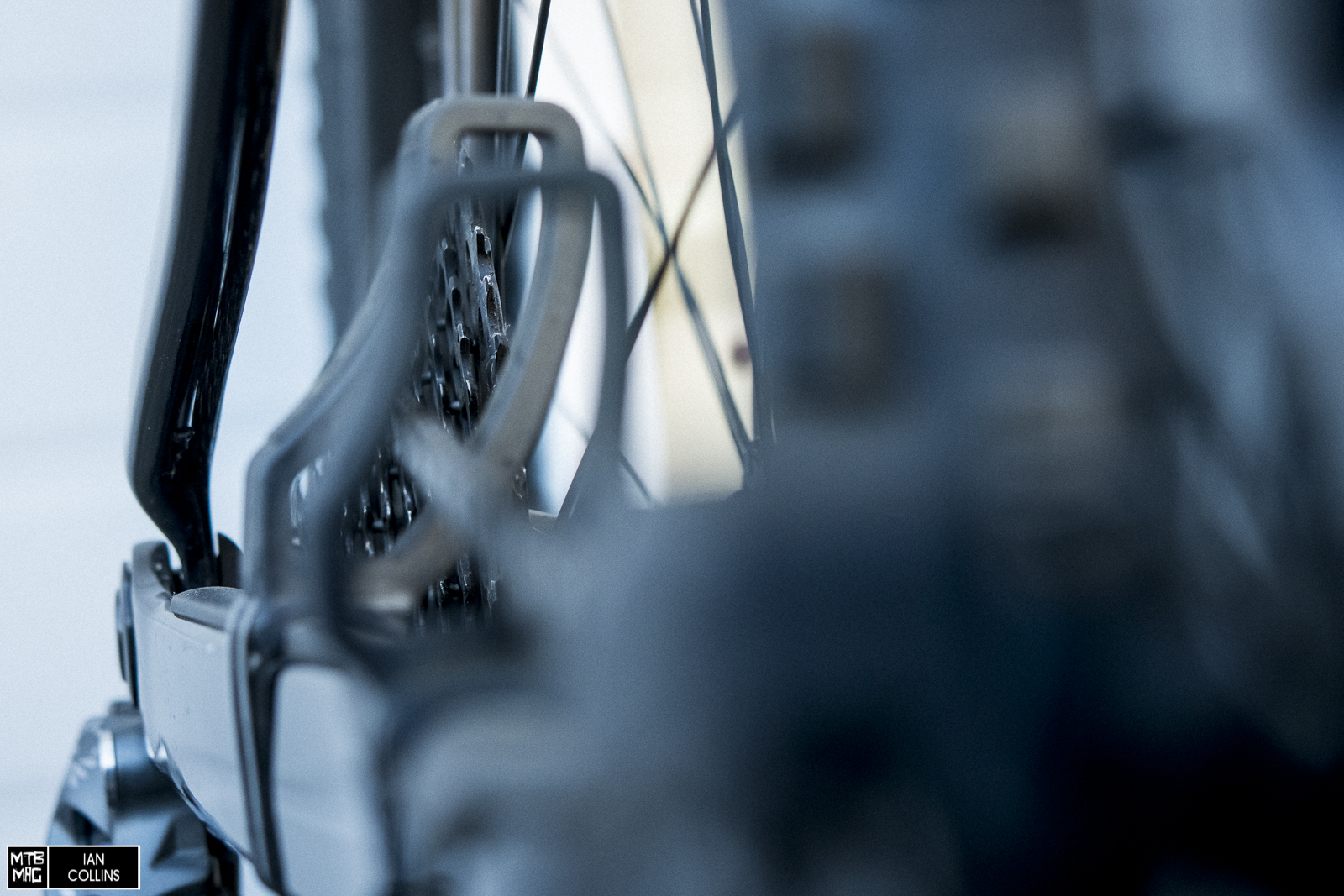 Broadly speaking, my findings are that the louder your bike is, the more the STFU helps. My Transition Sentinel has softer chainstay protection with raised nubs while my Trek Rail has a fairly smooth, harder durometer chainstay sheath – you can guess which one was louder. Despite one bike being an e-bike and one being fully human powered, they are similar in suspension design, with both being classic 4-bar layouts, so this served as a good basis for comparison. On trail, I noticed an immediate and substantial improvement in how quiet my Rail became; it was slap in the face obvious. On the Sentinel, there was a noticeable difference as well, although it wasn’t quite as dramatic. Roughly speaking, even with motor noises aside, the volume on both bikes was turned down to a much more acceptable level which is always nice as it is less distracting and allows you to focus on the trail ahead. As far as durability is concerned, I suspect it would take a very long time to wear one of these units down to the point that it needs replacement. After a few months of use, aside from some chain grime on the inside surfaces, I still see no signs of wear.

For $35, the STFU is a no brainer for anyone with a bike so loud that it actually is bothersome. It becomes particularly more appealing the further you lean toward the gravity end of the mountain bike spectrum. However, if your bike is relatively quiet already, or if you aren’t all that distracted by drivetrain noise then maybe it isn’t for you. With that in mind, I also have a bit of an unconventional theory…By limiting the extreme range of your chain’s movement during rough sections, I suspect that the STFU may also help limit your chances of throwing a chain – particularly if you don’t use a chain guide. I don’t have anything concrete data that proves this, but logically it checks out. Anyhow, at the end of the day, the price is right, the weight is low and it’s definitely an effective combatant in noise based distraction, so nice work Kovarik and co.!