Recently, Trek invited North American journalists out to Mammoth Lakes, California for a preview of the newly updated Remedy. Aside from spending a day on the newly updated Powerfly, we got to shred around Mammoth on some of the mountain’s choice offerings. If you haven’t been to Mammoth, the trails are mainly comprised of loose pumice, resembling kitty litter, with loads of rocks and obsidian strewn about. The altitude is in the 9,000-11,000 foot range, and despite getting a full day in, I definitely wanted more time on the bike. Due to fortunate geographic positioning, I drove out to the event and Trek was kind enough to send me back to Santa Cruz with a long term test bike in the bed of my truck. 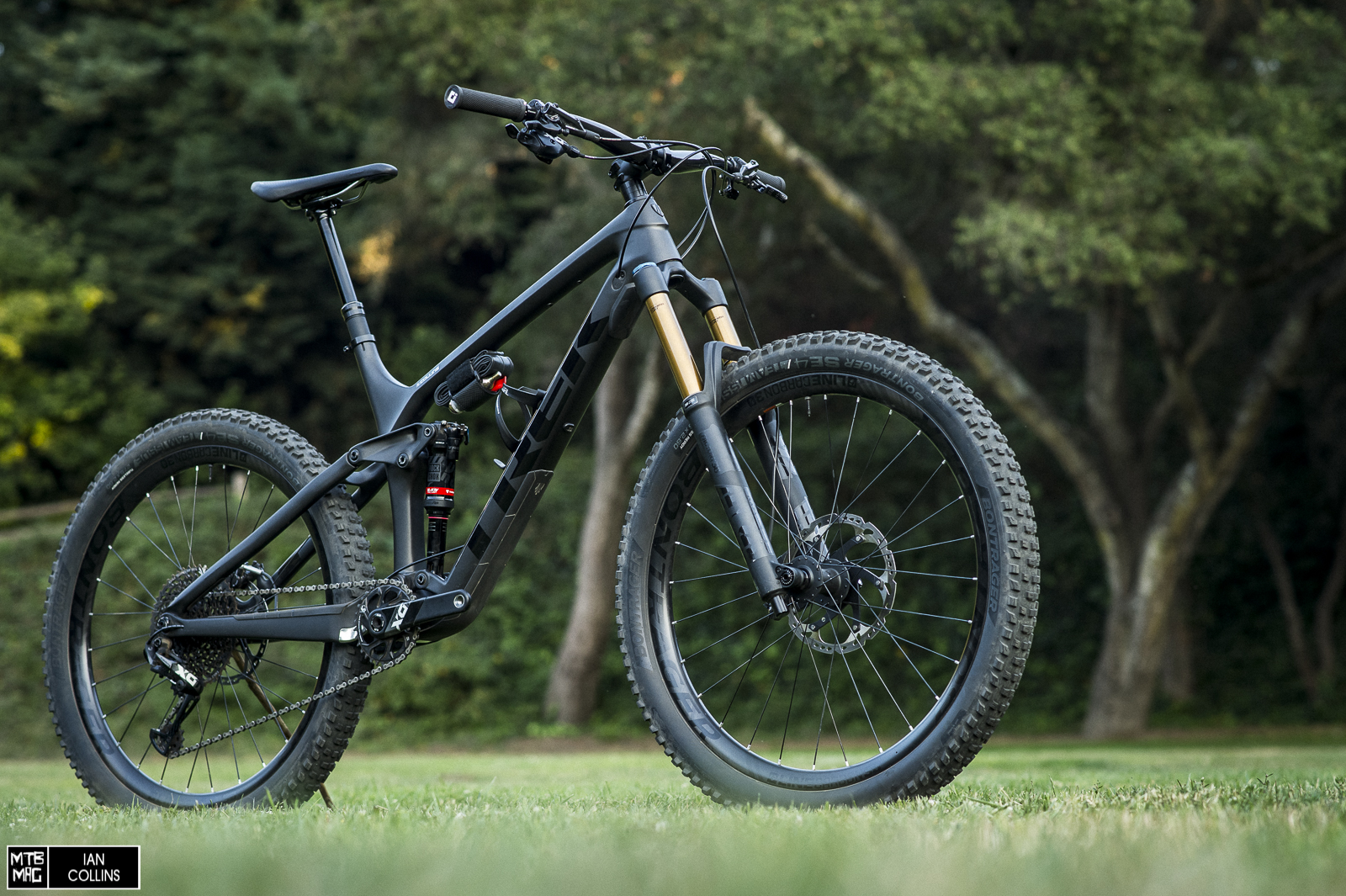 Anyhow, about that bike…after an initial, hasty glance, one could easily assume that the Remedy remained unchanged, but closer inspection and a look at the spec sheets reveal a host of seemingly minor, but very key changes. Gone is the “Full Floater” lower shock mount as well as 100 grams of fat on the frame. The seat angle has been steepened by a degree and Trek has integrated an on-frame storage solution via a partnership with Wolftooth. Perhaps what’s most important is that through a smart spec, the product managers have somehow shaved $1,000 off of the price tag of the flagship model that I tested here.

Most of the vital numbers on the Remedy remain the same, or only change so negligibly that it’s hardly worthy of mention, such as the reach, which grew just 1-2 millimeters. That said, the virtual seat tube angle got steeper by a full 1º (from 74º to 75º), which might not sound like much, but it actually helps to substantially improve body position/weight distribution while climbing.

Trek positioned themselves nicely in the market in terms of reach (455mm for the 19.5, tested), chainstay length (435mm for all sizes), and their relative proportionality. The Remedy is modern, balanced, and both numbers are right on the money, but certainly don’t push toward the extremes, so if you want wild and crazy geometry, you’ll have to search elsewhere. The same can be said for the head angle – at 65.5º in the low position, it’s just right for aggressive trail riding. If there was one area where Trek may have erred on the conservative side to a slight fault, it’s crank length. They stuck with 175mm, where many other brands choose to spec 170mm cranks, nodding at added clearance in exchange for a slight loss of power.

The Remedy required limited fiddling with setup to get everything just right. I had to run the stem above all three 10mm headset spacers and was still wanting a touch more height. The cockpit and reach felt roomy enough, providing ample stability. I most certainly welcomed the longer travel 150mm dropper. As a long limbed rider (~33″ inseam,  I lamented the 125mm dropper post on the last Remedy. Another easily overlooked, but big improvement is the steeper seat angle. I was made aware of it right away, from a putt around the parking lot while setting up. By steepening the seat angle, the rider is pushed further forward when the seat is extended, set to a climbing position. This makes it easier to get your weight over the front end on steep, technical climbs. It also calms the bike down and provides added traction to the rear wheel under power. Making the Remedy a more sprightly climber definitely adds to its versatility and well rounded nature. The “Mino-Link” is also worth the tip of the hat. I am a vocal fan of variable geometry, as it broadens a bikes versatility, allow riders to go switch between bike park friendly (low/slack) to all day adventure friendly (high/steep). Anyhow, along the spectrum of MTB suspension, ABP is a very active platform, and thus, it would typically require frequent use of the lockout lever to calm it down while climbing. Enter Re:Aktiv…

As mentioned prior, I spent a solid day on the Remedy in Mammoth in the bike park with chairlift access, then mainly rode it in Santa Cruz where all of my climbs were self powered. One feature that helps the bike climb well is “Re:Aktiv”.  In short, Re:Aktiv is a damping system with a “regressive valve” that provides a firm platform when pedaling, but as soon as the shock encounters a high speed event, it opens up and “gets out of its own way”. This means you don’t have to constantly be fussing with your lock out on variable terrain. Well…anything that sounds too good to be true, usually is. Re:Aktiv definitely accomplishes its goals on the ascents, but not without a bit of added feedback. Having ridden the old Remedy with a Re:Aktiv shock as well as a standard shock, I think the all out descending performance was better with a standard shock, albeit with the inconvenience of needing to reach down and lock the shock out. So it all comes down to tradeoffs…

Anyhow, “Thru-Shaft” is a separate technology that eliminates oil displacement cause by shaft movement, and in turn, eliminates the need for a charged, internal floating piston. As the shock moves through its travel, the shaft actually, physically exits the bottom of the shock. Having ridden Thru Shaft on a couple of models, I’d rate the technology as providing a performance increase over a lighter duty inline shock, but falling just short of a heavier duty shock with a reservoir. It’s worth noting that the new Remedy will now actually clear *some* coil sprung shocks this time around. This a great news, but check with your dealer and/or Trek before diving in though.

Well, if you were to ask me if I could feel a “5% increase in stiffness” in a frameset, I’d likely confess that I’m probably not that perceptive on a bicycle. Interestingly, I was actually blown away at how stiff the new Remedy is though. I noticed it in the first few turns, so numbers aside, there is a marked, perceptible improvement there, likely in part due to the fixed lower shock mount and beefed up chainstays. It is also partially because of the fact that the bike now features carbon fiber wheels, as opposed to the aluminum wheels on last year’s model. Anyhow, my main praise for Trek’s ABP platform, at least in the way that they tune it, is how compliant it is. In my opinion, more so than interrupted chainstay bikes (read: Horst Link), ABP bikes smash through mid-sized chunder a bit better, holding their speed more comfortably. ABP is also neutral under braking, when you need traction the most – thanks to the pivot that’s concentric to the rear axle. In terms of geometry, the balanced numbers lend themselves to confident positioning on the steeps and in the corners, without requiring too much muscle to maintain speed on less than thrilling sections of trail. 435mm chainstays aren’t considered short by any means – nor super long for that matter – but rather, they strike a nice balance between snappy cornering and stability in the rough, at speed. In terms of where the Remedy sits on the market, it is tilted more toward general purpose, aggressive trail riding. For those racing enduro or seeking an all out smasher bike, Trek would point you to the Slash, their brawny, 29″ wheeled, long travel offering.

Starting up front, the FOX 36 Factory fork, with its burly chassis, is a great mate to the Remedy’s sturdy frame. The updated Grip 2 damper is a bit more plush; less harsh and racy than past models, but offering a massive range of adjustment. The Shimano XT four piston brakes proved to be freakishly powerful and in the duration of our test, I didn’t experience any issues with fading or erratic lever throw that past models were susceptible to. The X01 Eagle drivetrain proved to be flawless, as always, delivering crisp and immediate shifting in both directions across its massive range, provided it is perfectly adjusted. You might think that Trek skimped by spec’ing a GX Eagle cassette, which, by the way suffers no actual performance loss, just a minor increase in weight. In my eyes, it’s one of the tradeoffs that helped them reduce the price of their flagship model by $1,000, while upgrading it to carbon fiber wheels.

Speaking of wheels, we’ve had great success with carbon fiber Bontrager wheels before, and this slightly more budget oriented set still has a fast 54T engagement, and the same tough, stiff carbon rims. They forgo the bladed, straight pull spokes for traditional, J-bend spokes, but we actually prefer that. The wheels are wrapped in Bontrager’s 2.6″ wide SE4 tires. On Mammoth’s loose, floaty terrain, they did a fine job, likely due to the increased volume and wider footprint.  At home in Santa Cruz, where I wanted accuracy and something I could really lay into in corners, they definitely fell short. Their extremely round profile and not so prominent side knobs were less than confidence inspiring in flat, dry, dusty turns, thus proving that there is no single, broadly applicable, perfect tire. In terms of cockpit, the in-house Bontrager handlebar, stem and saddle were all on point, leaving me with nothing to complain about. The dropper post sees greatly improved durability compared the last effort from Bontrager, as well as a 25mm increase in travel, both of which were due. That said, it still has a rather slow return speed, which is unfortunately not adjustable. Last, but not least, these days we shouldn’t take for granted the fact that the Remedy clears a full size water bottle and has two very secure places to affix a tube/co2/levers, thanks to the B-Rad mounts.

Coming full circle, despite appearing to be relatively unchanged on the surface, a great deal of the Remedy’s attributes have been improved substantially, even if appearing to be subtle. The sum of the parts add up to a greatly refined bike, but perhaps the biggest story is the increased value. Direct to consumer model brands have put an enormous amount of pressure on the “Big Three” bike shop brands (Trek, Specialized, Giant) and Trek has responded very well. In relative terms, there is no denying that $6,999 is quite a lot of money for a bike, but it is very impressive that Trek managed to shave $1,000 off of the retail price of their flagship, bread and butter trail bike, all while improving the frame’s construction and geometry AND upgrading it to an excellent carbon fiber wheelset. If you’re like most consumers, and flagship level is out of range, consider the effort Trek made toward improving this model’s value, and have a look at how they applied that train of thought to some of the other new Remedy models.