This past year at Sea Otter, our friends at Bontrager said “pssst…come check this out…” They were talking about Bontrager’s new (at the time) Line Pro 30 Carbon wheelset. They gave us a pretty impressive rundown: 108 point engagement, ~1,700 grams, tubeless ready, and more. This all sounded quite good, but at the time we’d been quite impressed by the Roval Traverse SL Fattie and thought it would take some convincing to dethrone it. When they mentioned that the Line Pro 30 would retail for just $1,200 we were actually quite shocked, in a good way. Since then we received a pair of 29″ test wheels and have been hammering away on them. Read on for the full review… 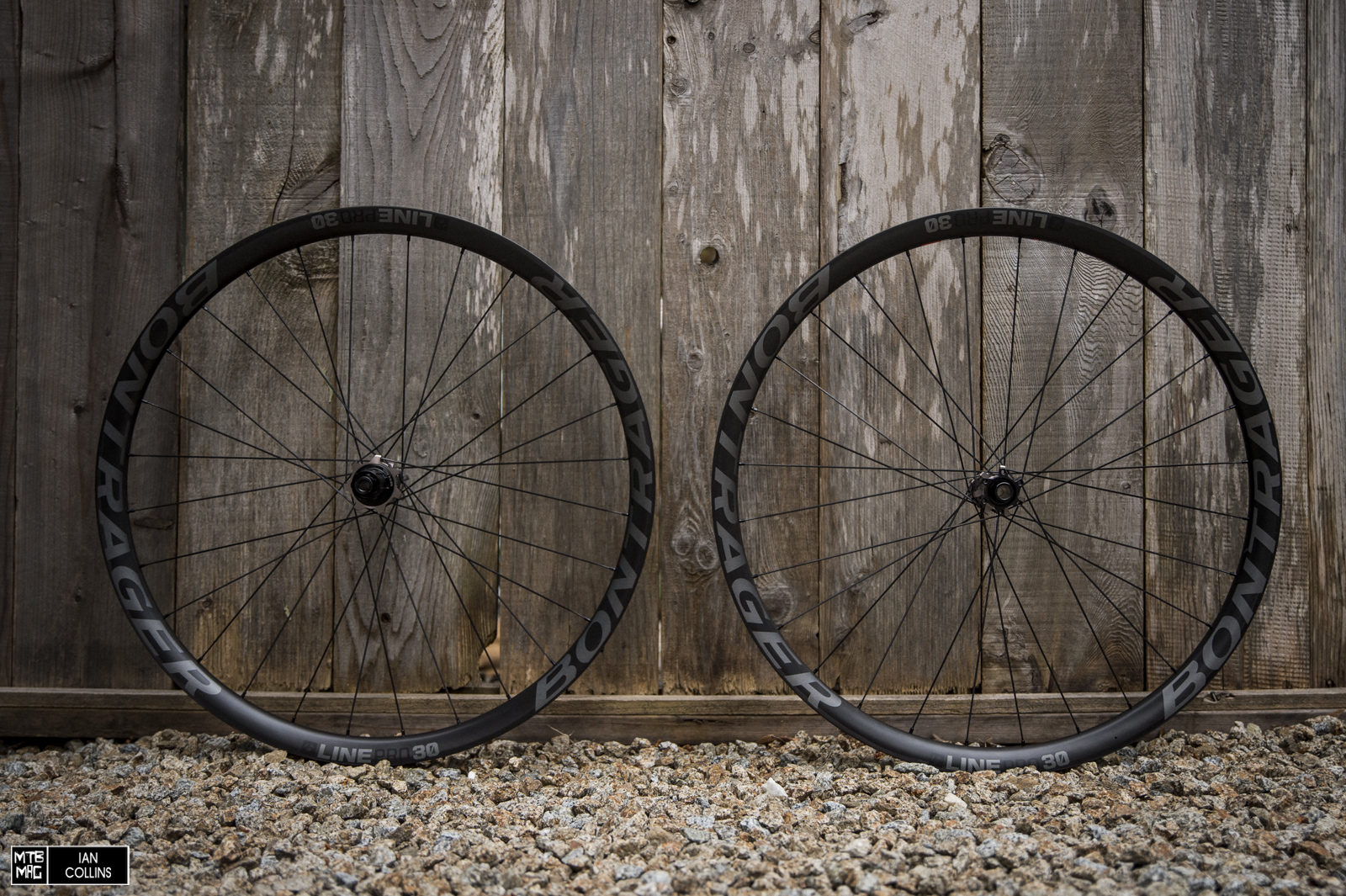 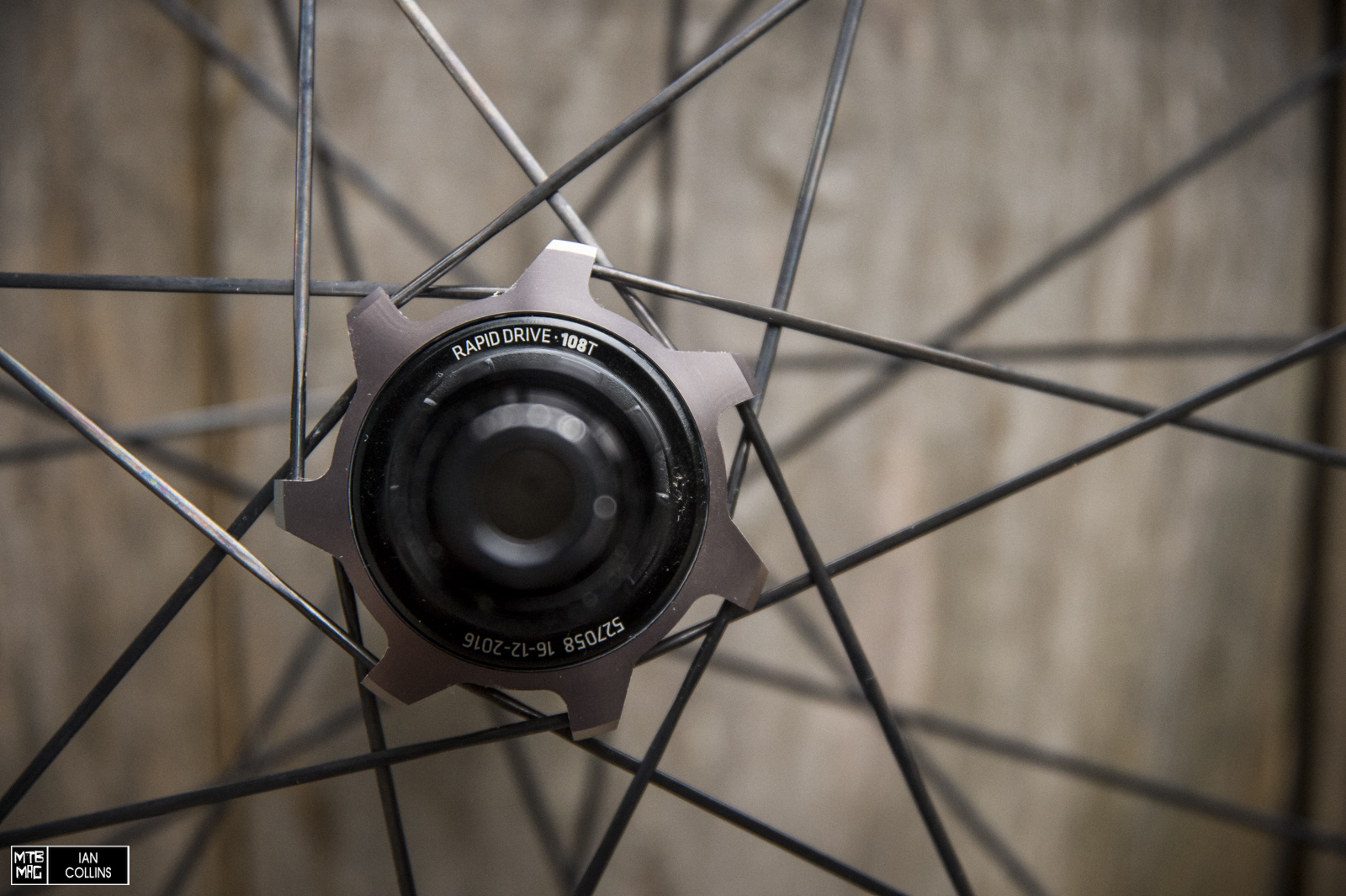 At the heart of the rear hub is the Rapid Drive 108T freehub. Six offset pawls rotate inside of a 54 tooth drive ring in the hub shell. This makes for 108 points of engagement, which translates to an engagement point every 3.333º 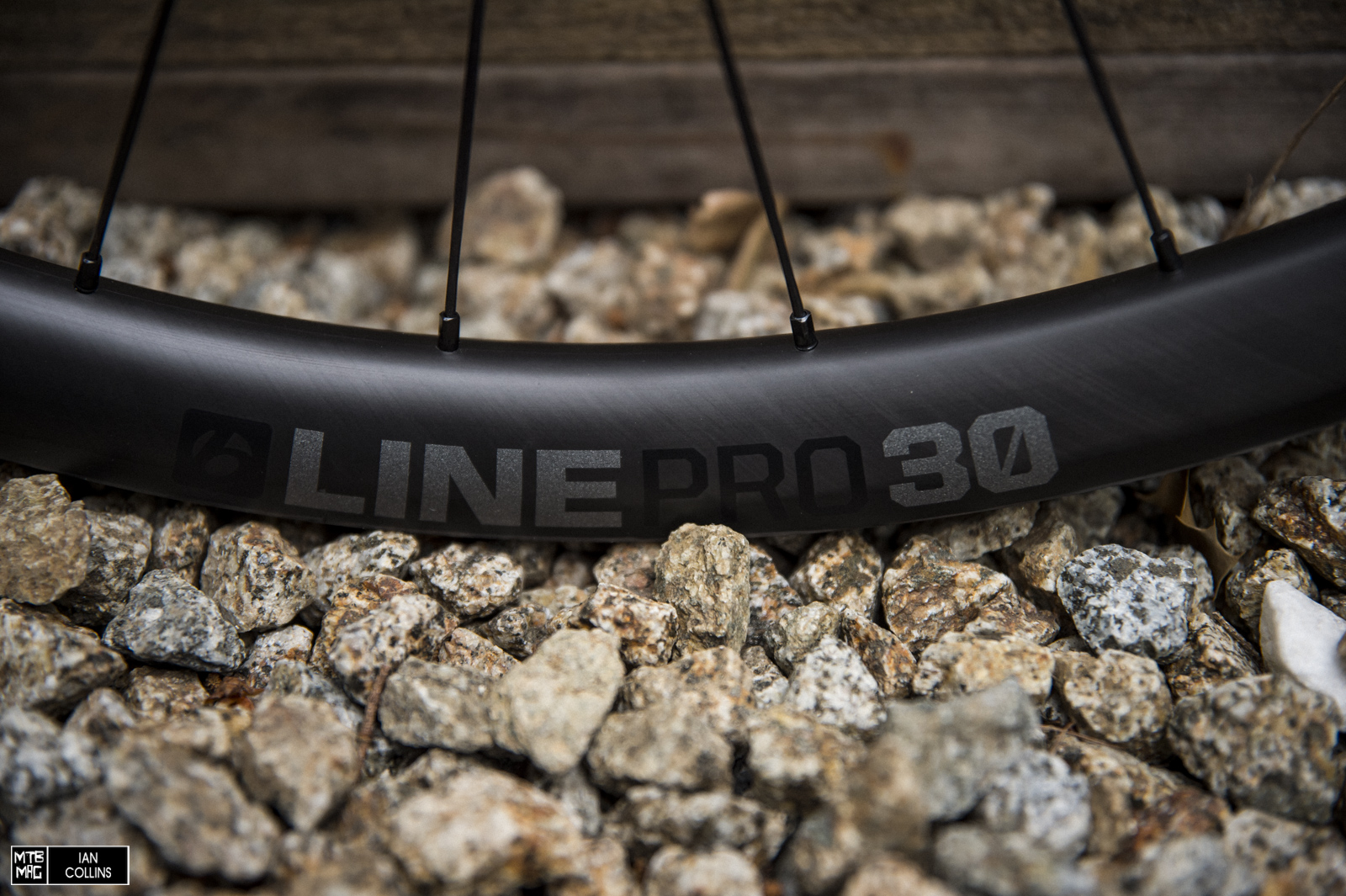 The rims on the Line Pro 30 wheelset are fairly tall, which almost makes them look a bit narrow, but they are still plenty wide at 29mm internal/33mm external. 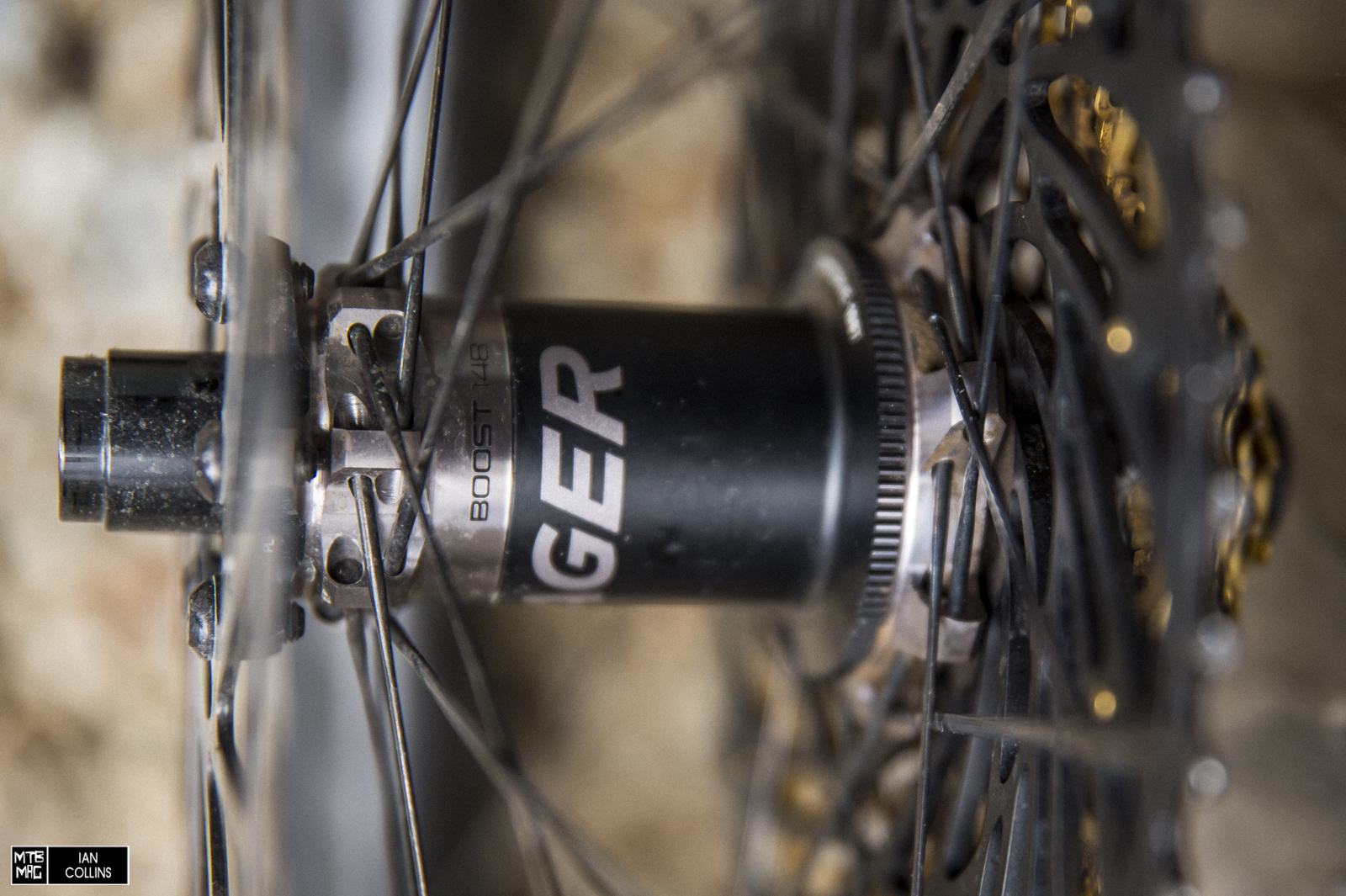 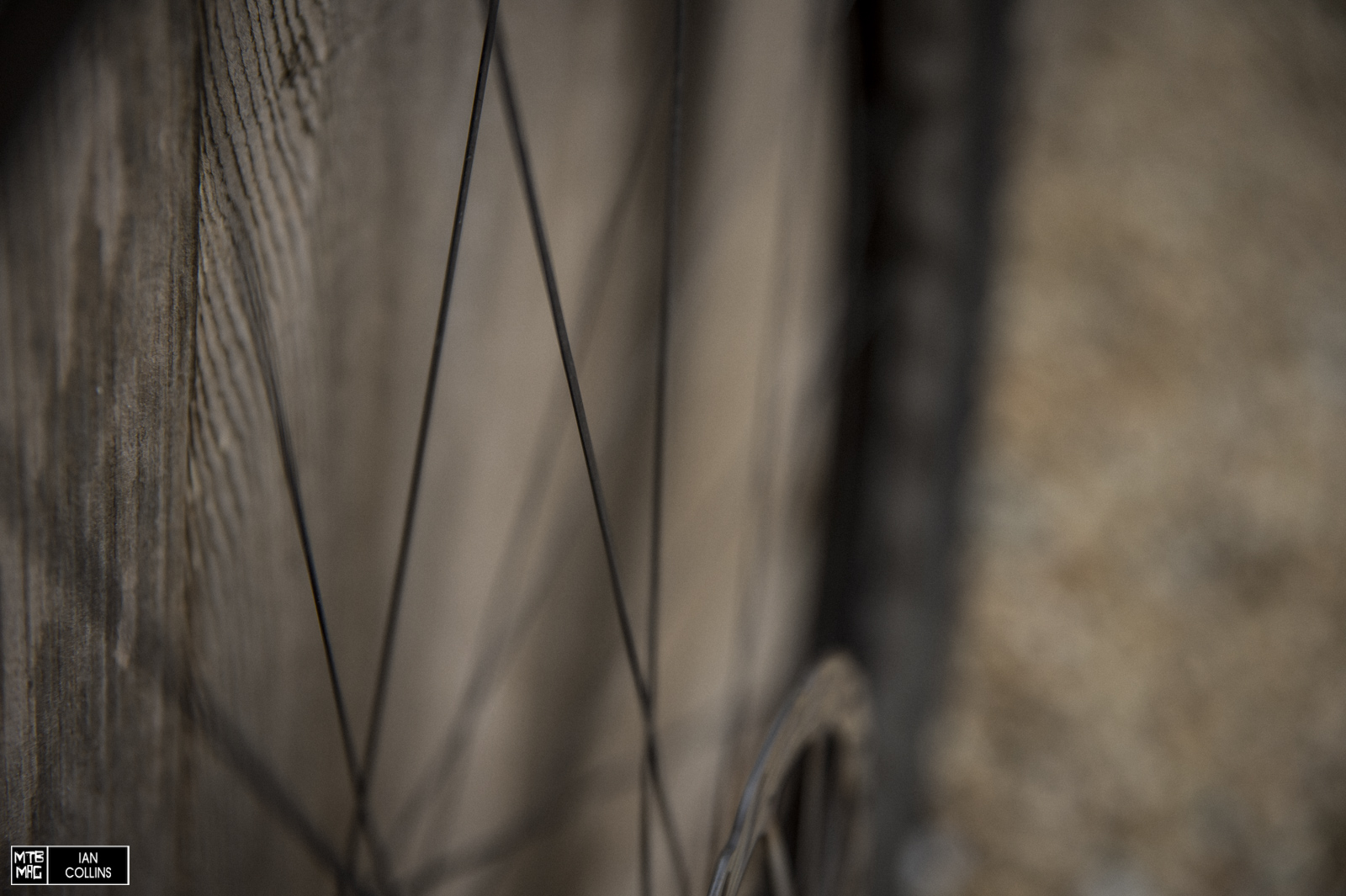 Straight pull hubs with bladed spokes. The fact that they’re bladed, in our opinion is less valuable for aerodynamics but quite useful if you need to true or re-tension them. Truing straight pull, non-bladed spokes is quite a pain because the spoke just spins in the hub shell and since it’s round, it’s hard to keep in place. This isn’t the case here. 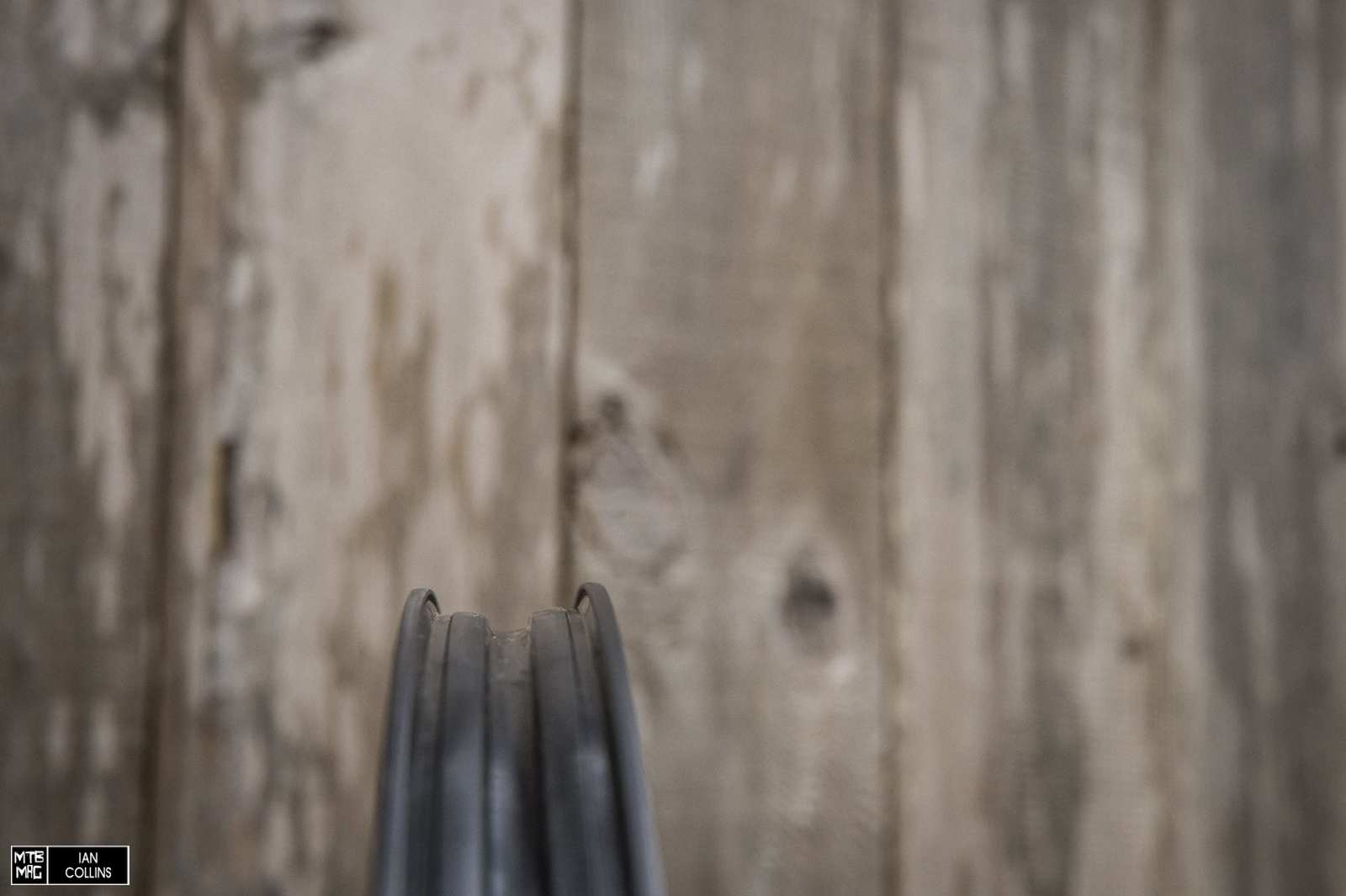 The rim profile with the TLR rim strip installed. The rim strip has a pronounced shape and works in unison with the rim’s bead hooks. We were surprised to see Bontrager use bead hooks on these wheels while most companies are abandoning them for hookless.

We’ve got to say, this was quite possibly the most difficult wheelset that we’ve ever mounted tires to. For the first part of our test, we used Michelin’s which are notorious for fitting a bit tight. 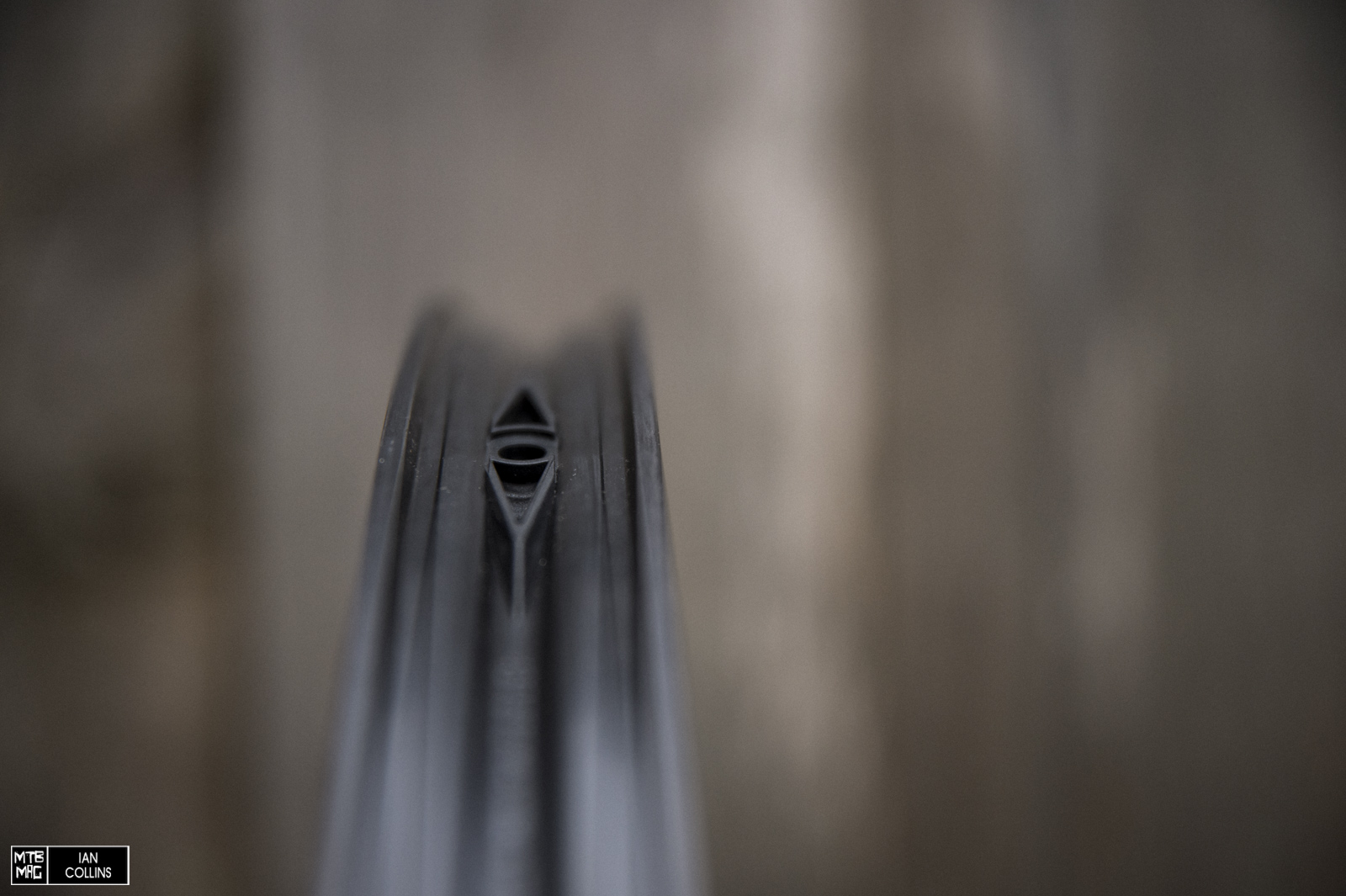 The thick, proprietary rim strip had more to do with the difficult mounting then anything. It takes up quite a bit more real estate than standard rim tape, thus making it harder for the tire beads to nestle into the “drop center” of the rim. Part way through our test while swapping tires, we switched to 1″ Gorilla tape which is only $2 a roll and can tape a few wheelsets. This gave us the extra wiggle room needed for easy tire installation and removal and also saved a few grams. 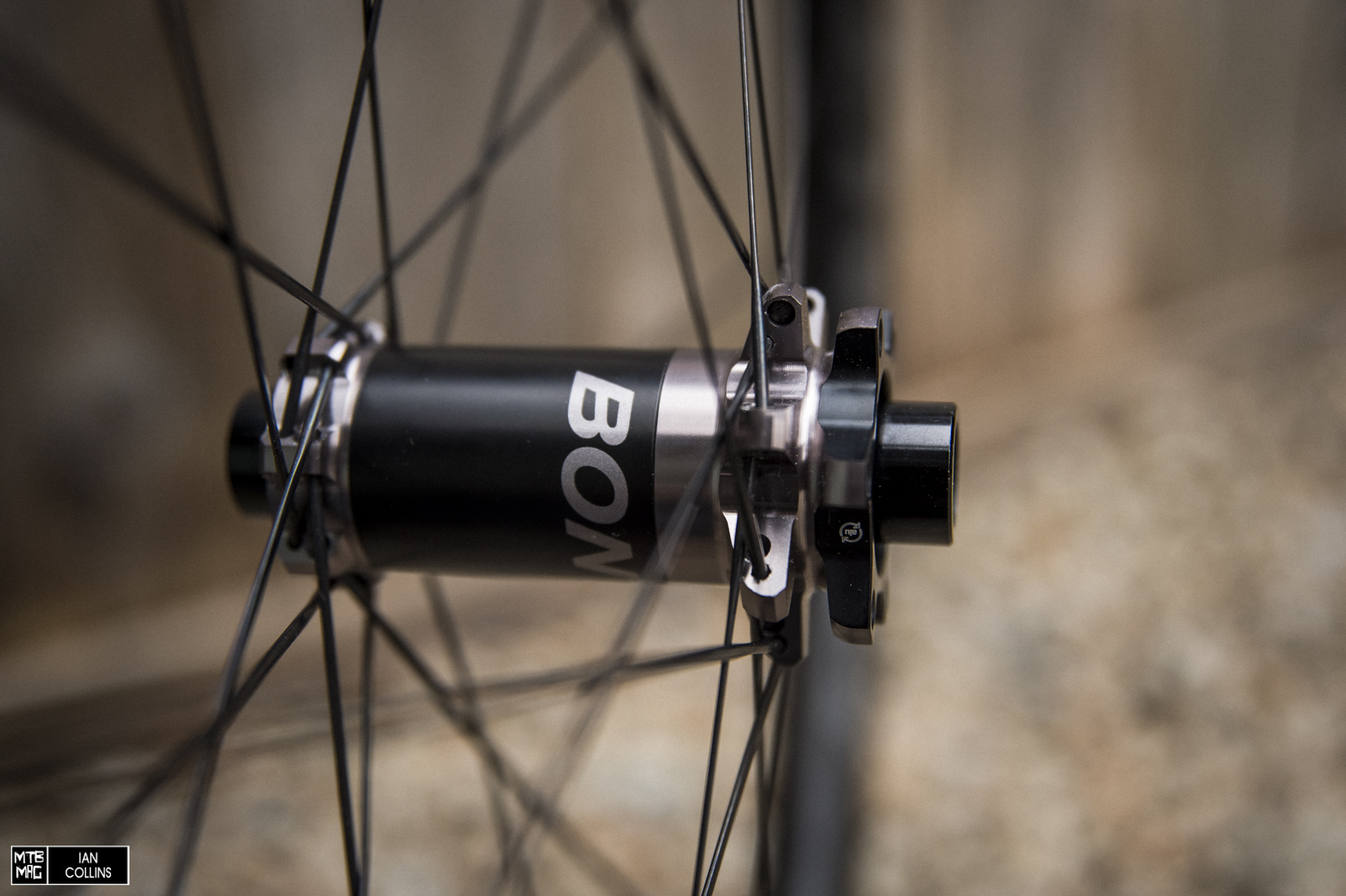 As far as the hubs are concerned, the bearings were smooth all the way around and the spokes seemed to have quite a bit of tension. With some manufacturers going with radial and 2 cross lacing, we commend Bontrager for sticking with 3 cross for added strength and durability, despite being slightly heavier. It certainly makes sense for a wheel aimed to cover everything from duties up to “enduro” style riding.

Most rides start out with a climb, and thus the first attribute that made its presence felt was the blazing fast engagement. On technical climbs in particular and when rallying out of awkward turns we appreciated the instant power transfer. Our tester absolutely detests hubs that lag, so the Line Pro 30’s were a dream come true in that regard. As far as noise, they sound a bit like a 54T DT Swiss star ratchet, but with just a bit more buzz. The wheels aren’t freakishly loud or annoying by any means though. 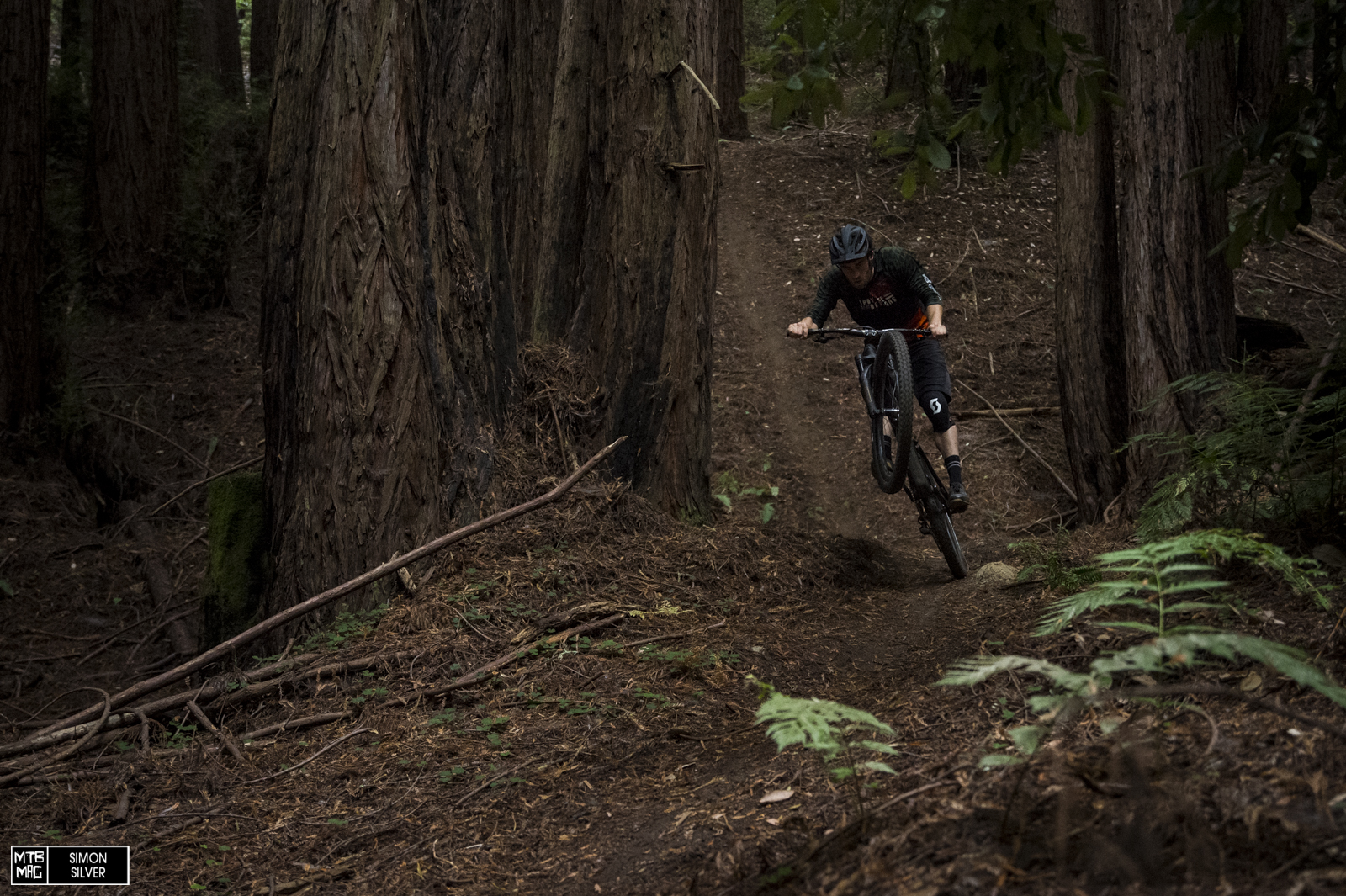 Once we pointed this wheelset downhill, we were immediately impressed by their stiffness. Based on how tall they were, we anticipated that they might ride a bit rough in terms of vertical compliance, but that was not the case. In terms of trail feel, this wheelset was slightly stiffer than the Roval Traverse SL Fattie, but not as stiff as an ENVE M70. That’s a good place to be, and overall, we’d rate the Line Pro 30 as having some of the best ride characteristics on trail. There are loads of expensive carbon fiber wheels out there that are flat out too stiff. Generally speaking, the justification for splurging on carbon hoops isn’t solely to save weight – in our tester’s opinion, it has more to do with ride quality, and these wheels are fantastic, especially given their pricepoint. 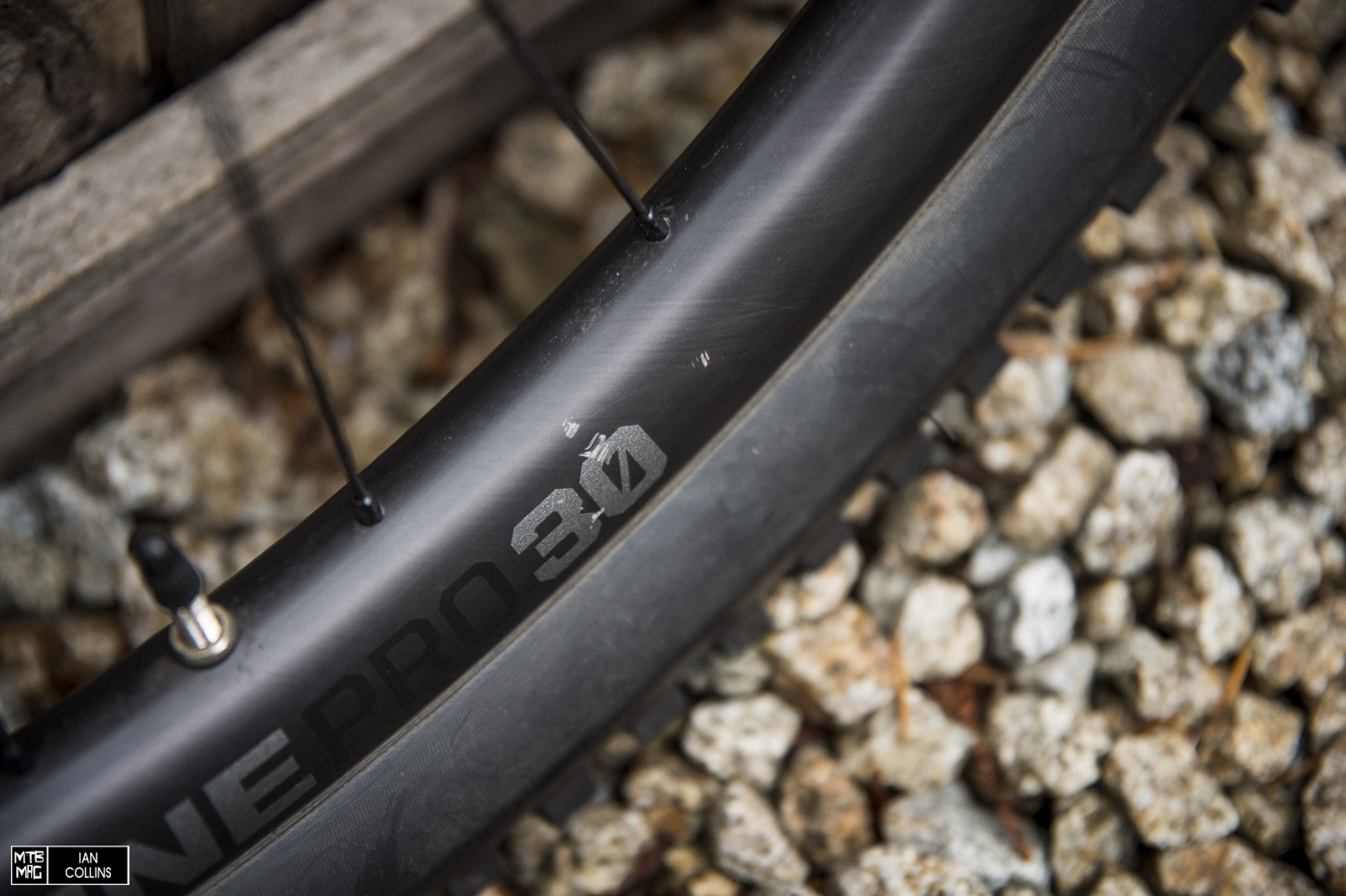 We slapped hundreds of corners as hard as possible and unlike many carbon wheelsets that we’ve ridden, we never had to re-tension the Line Pro 30’s. Loads of G-outs and cases were met with no consequence. There aren’t a hell of a lot of rocks in Santa Cruz where we mainly rode the wheels, but we ran into a few at low pressures and had no issues, although we realize that it just takes hitting one at the wrong angle to annihilate any wheelset. The hubs are still spinning freely after numerous hosings and there is no extra drag in the freehub despite the fact that we haven’t rebuilt it once our test period.

In the grand scheme of things, functionally – our only gripe with these wheels was the rim strips. While that seems slightly bothersome, difficulty of tire installation and removal will vary with each tire and it can be remedied (and lightened) with a $2 roll of tape. By the way, running pressures as low as 20 PSI, our 190 pound tester never once burped his tires with either the TLR rim strips, or the Gorilla tape, for what it’s worth. One other small grievance is that the wheels ship with a Shimano HG driver, and a SRAM XD driver would need to be purchased separately.

Anyhow, all in all the ride quality is fantastic –  the Line Pro 30s offer subtle compliance to smooth out your ride, but provides plenty of side to side stiffness. To top it off, the 108 point engagement is just the icing on the cake. Some brands skimp and shamefully use engagements as low as 36 points on wheelsets that literally cost twice as much money. Are these the best carbon wheels on the planet? That might be too bold of a claim, but they very well could hold the best value in the complete carbon fiber wheel world.