Just before Sea Otter, Michelin invited us to Santa Barbara for a look at their strong re-entry to the mountain bike tire world. Although they were quite prominent in the golden years of World Cup DH, the French brand went nearly radio silent for a bit. Coincidentally, that quiet period was right around the time that the mountain bike industry was struggling to find itself…at least in terms of wheel size anyway. Anyhow, we headed back to Santa Cruz with a box full of tires to dabble with and went straight for the bread and butter combo: a grippy and versatile Wild AM up front and a fast rolling, but not quite semi-slick Force AM out back… 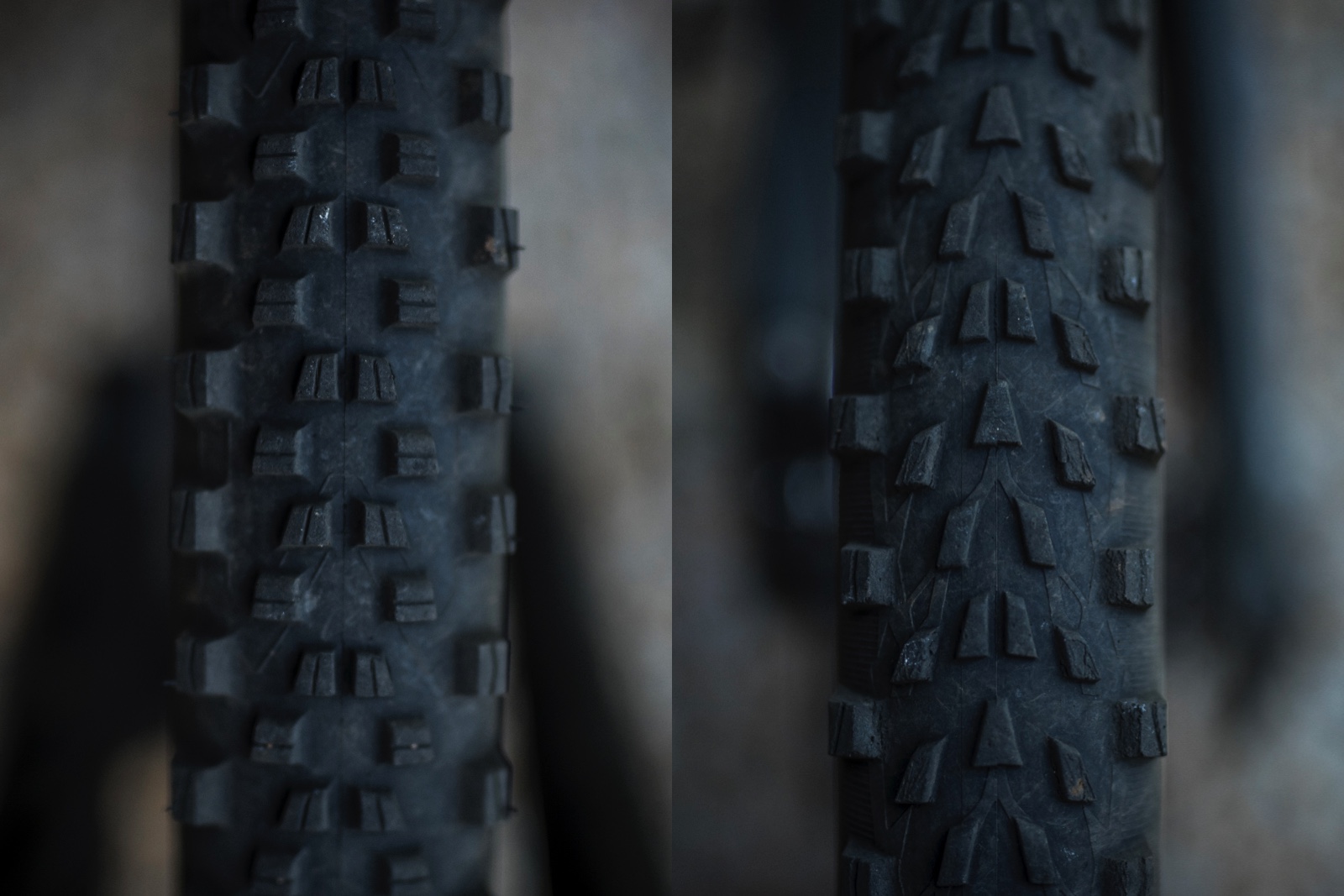 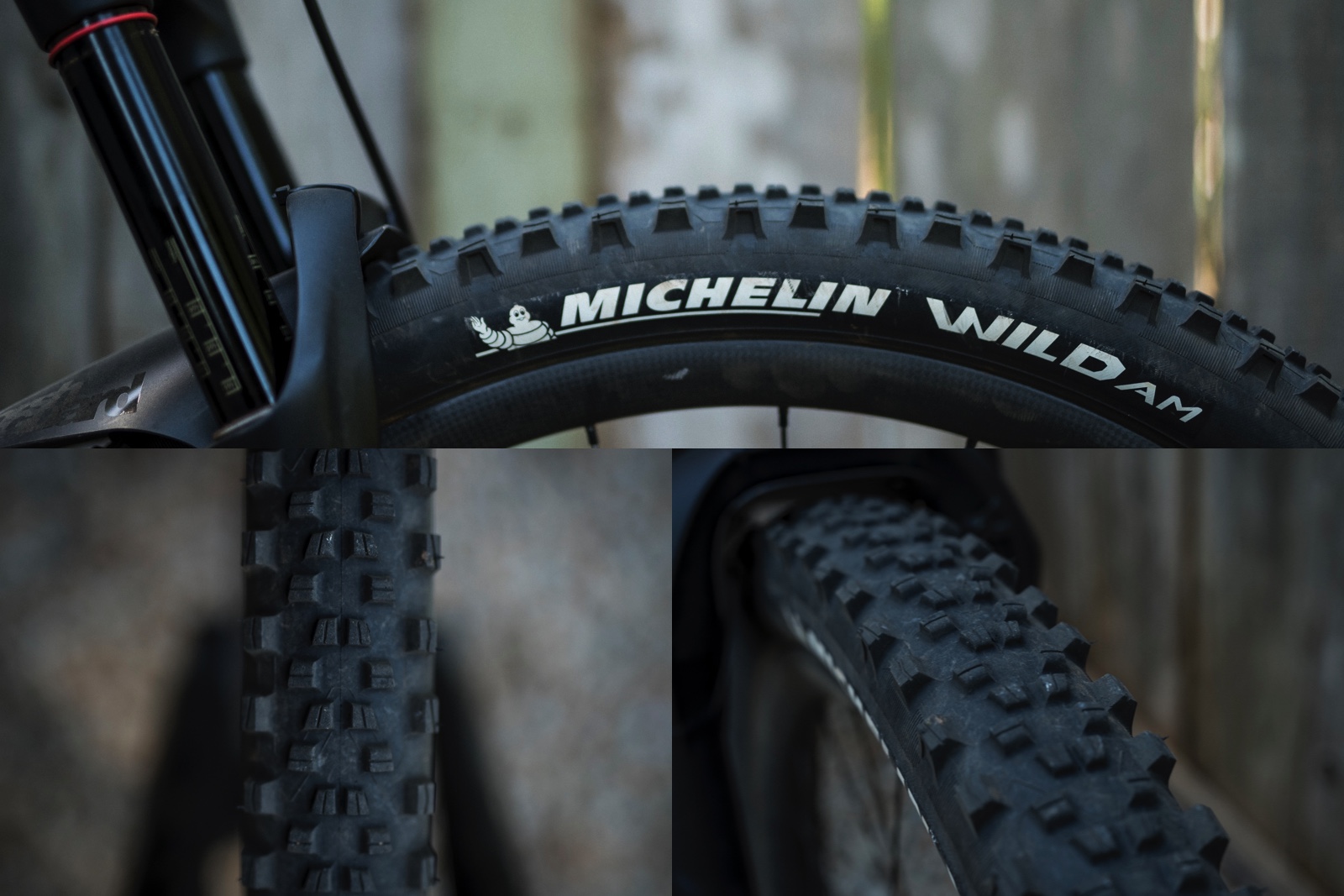 Quite often MTB tires can look suspiciously similar to one another, but The Wild AM doesn’t really fall into that category. It utilizes a large amount of knobs per square inch with a broad array of unique knob profiles. The main contact patch alternates between two triangular, tightly spaced knobs with vertical sipes and two square shaped, widely spaced knobs with horizontal sipes.

At the shoulders, the side knobs go back and forth between a more outboard knob that’s scalloped on the outside (to encourage predictable squirm) and a slightly more robust knob sitting further inboard (for support during hard cornering). Under close inspection you’ll see that the shape/angle of the sipes on these knobs is more complex than a simple vertical/horizontal sipe. 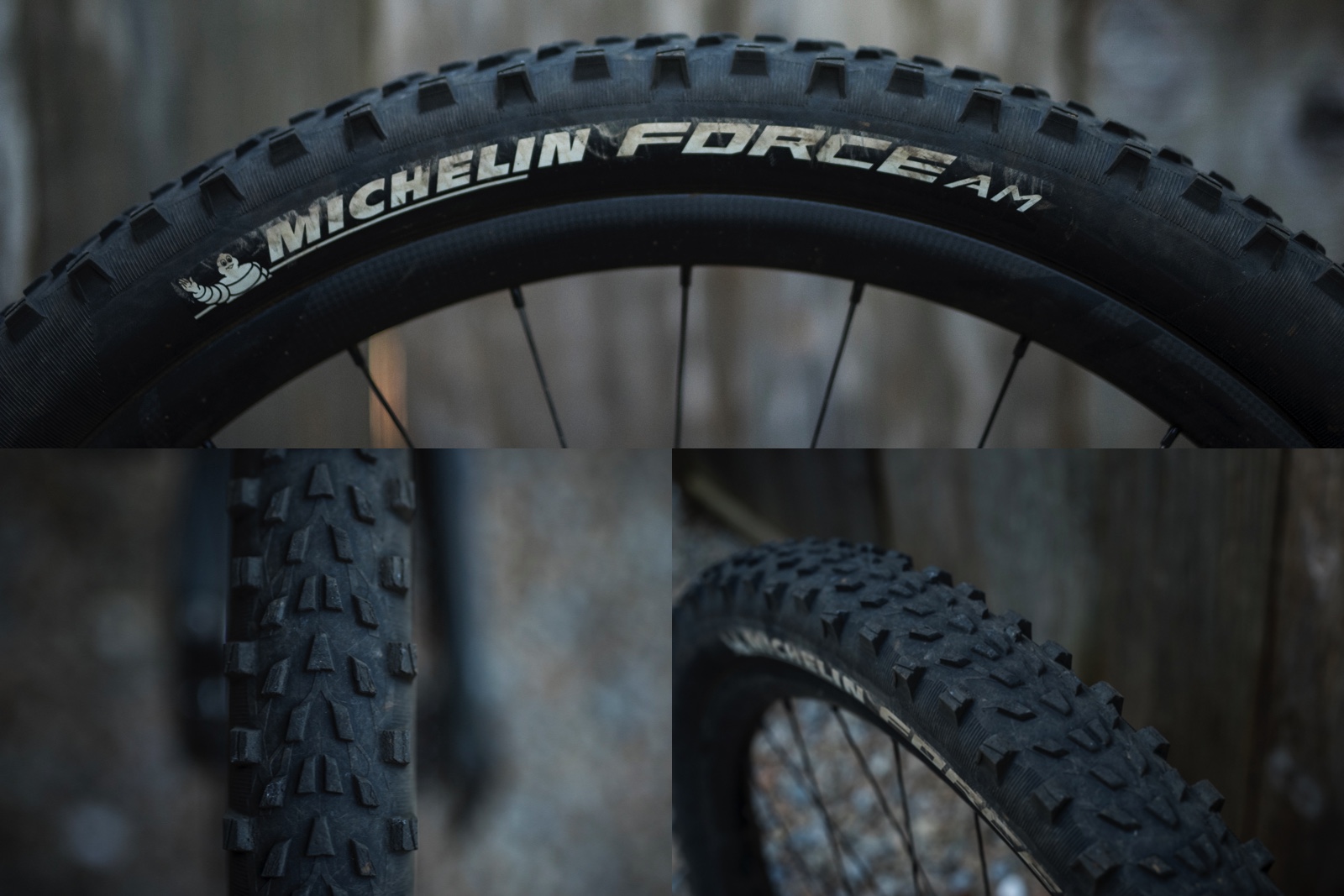 We’ve ridden the Force AM under the guise of the Wild Race’r Enduro tire in the past, featuring a heavier duty casing. The Force AM has a mid duty casing and its tread pattern falls somewhere in between a semi slick and a fast rolling profile. We thought this made it an excellent candidate for a back tire to match the Wild AM.

At the contact patch, a combination of triangular and trapezoidal knobs form a triangular shaped grouping by alternating two, four then three wide. These knobs are long, low, narrow and lack siping altogether. At the shoulder, the side knobs have the same siping and profile as the Wild AM, but they are more broadly spaced and slightly smaller in size providing a bit less cornering support.

Michelin was an early adopter of the UST/Nagesti tubeless system long before anyone else, so much like their DH tires that we rode back in the early 2000’s, we chose to run them tubeless with latex fluid. Fitting the bead to our Roval wheelset was just difficult enough that we knew burping wouldn’t be an issue. We had no problem inflating them with an average quality floor pump.

We first rode these tire in Santa Barbara on a broad mix of surfaces: wet, dry, sandy and rocky. Upon bringing them to our home turf in Santa Cruz we’ve mainly ridden them on trails in the Redwoods. Therefore it’s been a mix of loamy, duffy trails in both wet and dry with roots and plenty of hardpack. Since our ride in Santa Barbara we haven’t ridden them on a ton of rocks, but they’ve seen a fair share. For the most part, our tester ran this tire combo at around 28PSI front and 30PSI rear. That said, he would go up or down by 2-3PSI depending on conditions. On faster rolling terrain with gnarly G-outs and snappy, bermed turns higher pressures were used to combat rolling. Conversely, on rougher trails with more braking bumps and chatter, lower pressures were used in search of more grip and comfort. 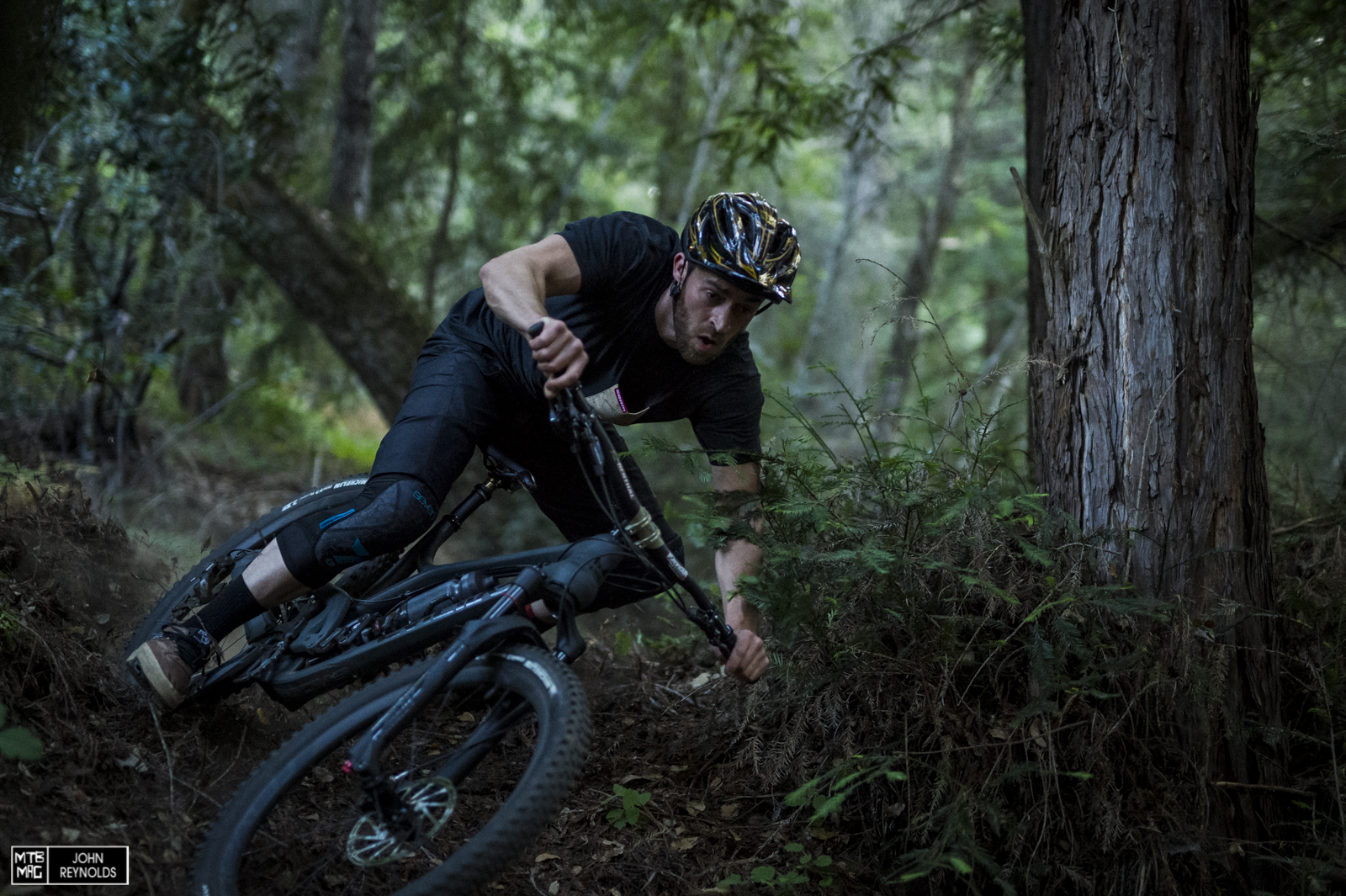 Straight away we felt a very high level of trust and confidence in the Wild Am front tire. With a nice, predictable transition into a drift, its cornering support is absolutely excellent and the braking is also quite good. For such a knobby tire, it rolls decently fast, likely due to the higher number of knobs. As far as the compound’s on trail feel, it isn’t super soft and smushy, but isn’t overly firm either – striking a nice balance between traction and durability. Put it this way: we rode the tires on wet roots and never felt nervous, but thus far the wear has been very good and they roll pretty quickly. There’s not much more you can ask for in a tire. 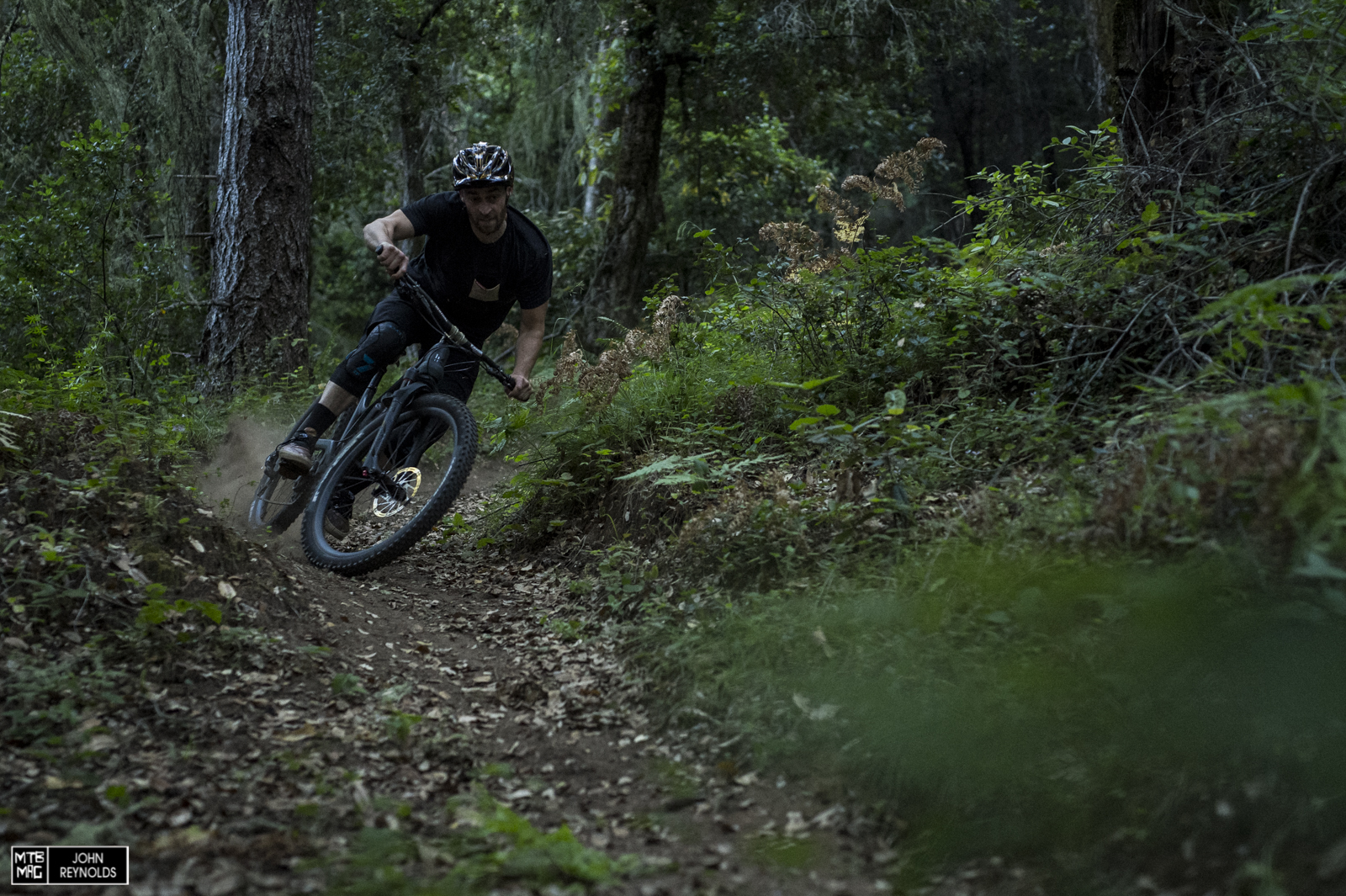 As far as the Force AM is concerned, we were a little skeptical at first, curious if it would leave our back end swapping about. However, for how small the side knobs are and despite being spaced further apart, they were surprisingly grippy. Although on really steep, dry trails we did feel a slight lack of braking power, that’s to be expected from any tire with knobs this low. With such good rolling resistance and surprisingly impressive climbing traction, something has to give…That said, if your daily trails are super burly, you may want to consider the Wild Race’r Enduro with the same fast rolling tread pattern combined with a heavier duty casing. If it’s flat out traction that you’re looking for, perhaps consider a Wild AM in the rear to match the front. We rode one briefly out back and were very impressed. Speaking of swapping tires, although we suffered no flats with either tire, we wouldn’t be in a hurry to use the Force AM up front. For AM/Trail use, unless your trails are quite tame, it likely won’t offer quite enough cornering/braking traction for front wheel duty.

This AM/Trail tire combo represents a good cross section of Michelin’s resurrection in the MTB world. A couple of years ago, they started working with World Class athletes such as Jerome Clementz and Nico Vouilloz and those efforts have paid off. While they are slowly building up their XC and DH line, they’ve concentrated the most efforts in the bread and butter AM/Trail/Enduro segment. Our tester is truly enamored with the Wild AM up front and also enjoyed it out back. We’d love to see that same tread pattern offered in a slightly softer/slower compound with a heavier duty casing for the Enduro crowd. Splitting the middle between a semi slick and a full knobby, the Force AM is an excellent, fast rolling rear tire for conditions that don’t require a ton of burly knobs. All in all, this is a great combo that should suit a broad number of riders in varying conditions at a low weight with sturdy puncture resistance at reasonable price.