Transition Bikes is a relatively young company, founded and developed in the early 2000s by young riders. Transition’s style is that of a group of guys which genuinely enjoys MTB, as you can see from their website, where the owners and the staff have a leading role in all the action pictures and videos. This mood clearly transfers into their products which are simple, concrete and aimed at having fun. The Scout Carbon, the American brand’s 27.5” Trail bike, is in line with that. We put it to the test together with its big sister, the Patrol Carbon, of which the test will be published next week, and will be followed by a brief comparative analysis.

Transition offers 3 very similar builds of the Scout Carbon in which the main components are from the same brands but come in different versions and prices. We tested the kit 3, the cheapest one, painted in Orange Blood. We tested the Scout Carbon on various alpine trails, enjoying the hospitality of the Ride on Noli shuttle service and the Deutsche Familien Hotel to ride it on the Finale Outdoor Resort trails. 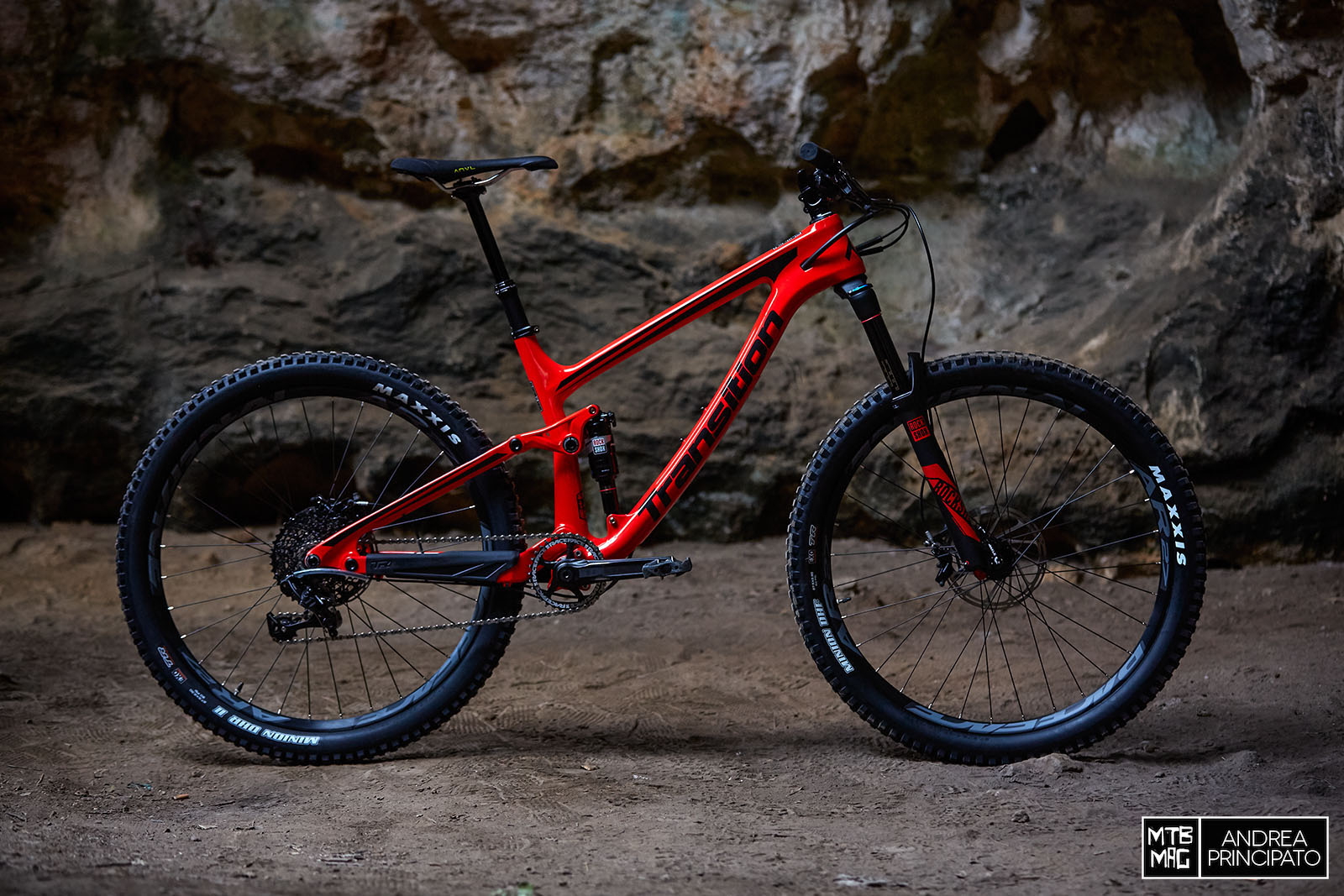 The Scout Carbon is entirely made of carbon fiber, apart from the rocker link which is made of aluminum alloy. The frame is exactly the same on all the 3 builds. The kinematics is based on the Horst link: Transition jokingly called it GiddyUp. The GiddyUp system provides 125mm of travel with a slightly digressive curve until sag zone and then a lot of progression from there on. Transition recommends setting the sag at 33% to efficiently use all of the Scout’s travel with the two spacers provided in the Rear shock. The antirise value is well calculated and the suspension is sufficiently active under braking. The antisquat figure is neutral, so pedaling stability is very good even with the shock in Open position. 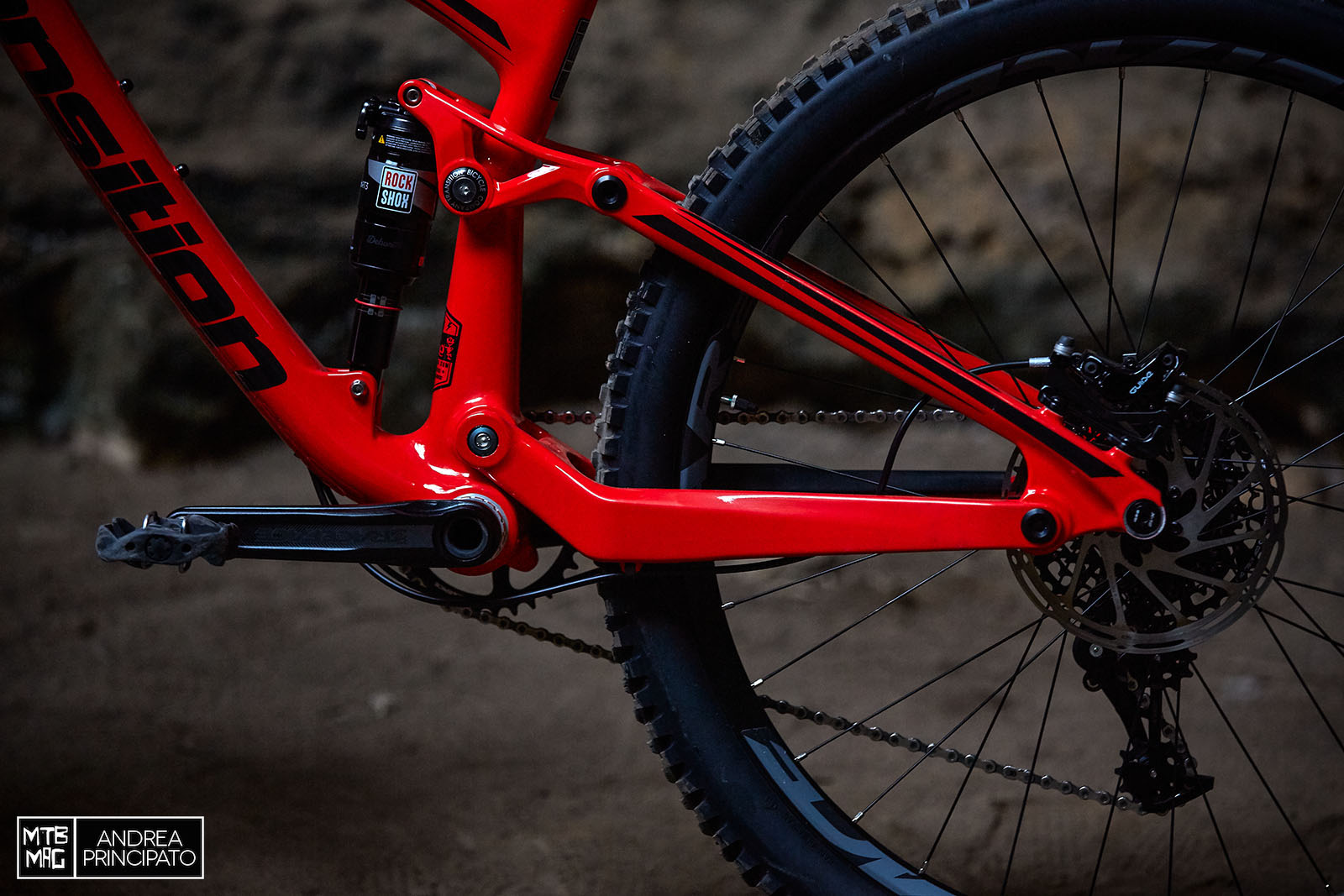 On all the Scout Carbon builds, the shock is a RockShox Monarch RT3 DebonAir, therefore, it’s a “legacy” standard and not a metric shock. It features 3-position compression damping: Open, Pedal and Lock. In Lock position the shock is almost completely locked out, while the Pedal position provides pedaling stability and at the same time enough sensitivity to soak up off-road bumps. 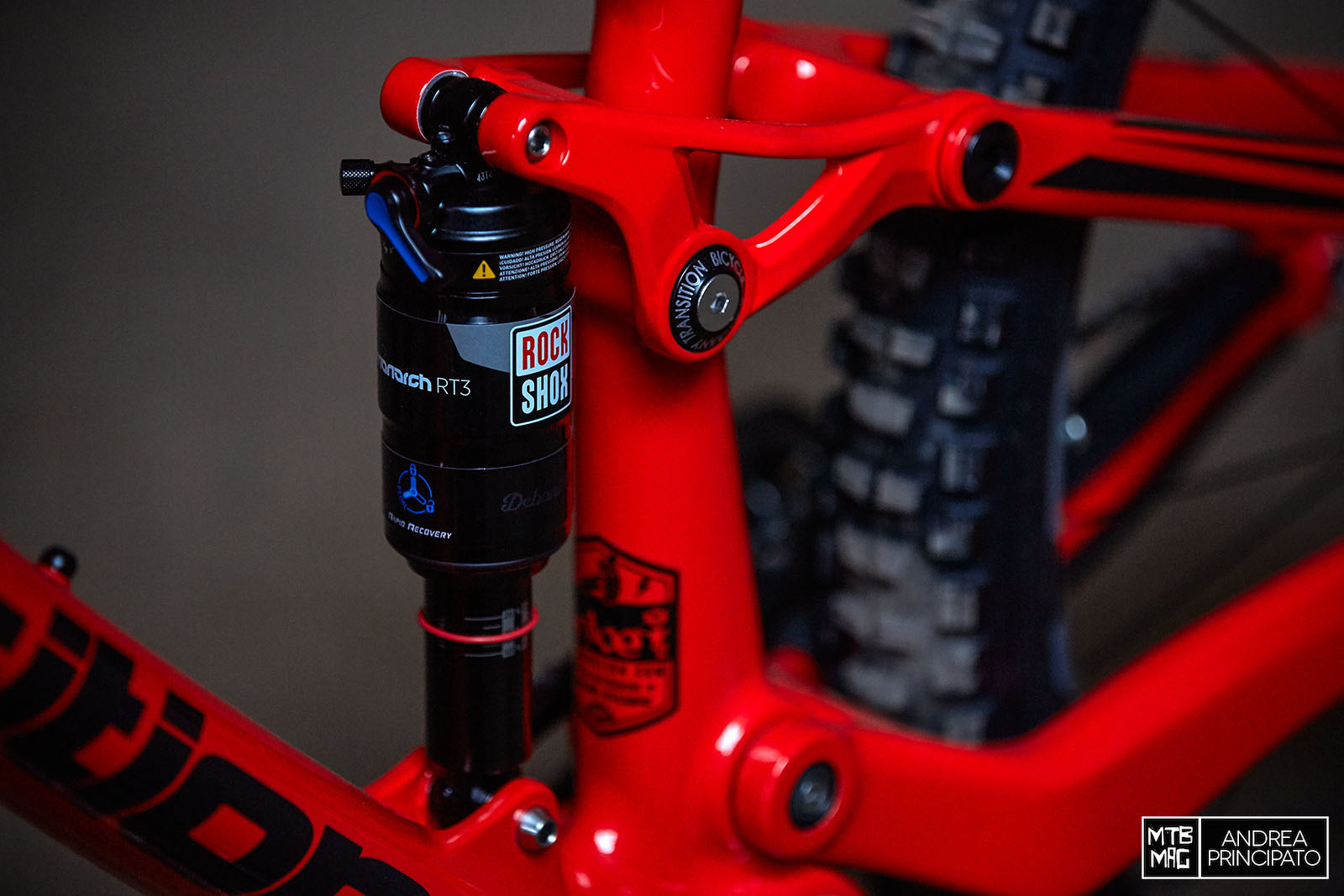 The fork installed on all 3 builds from Transition is a 140mm RockShox 140mm Pike with decals that match the frame coat. On kit 1 and 2 we find the RCT3 version of the Pike, while on kit 3 there is a RC version. 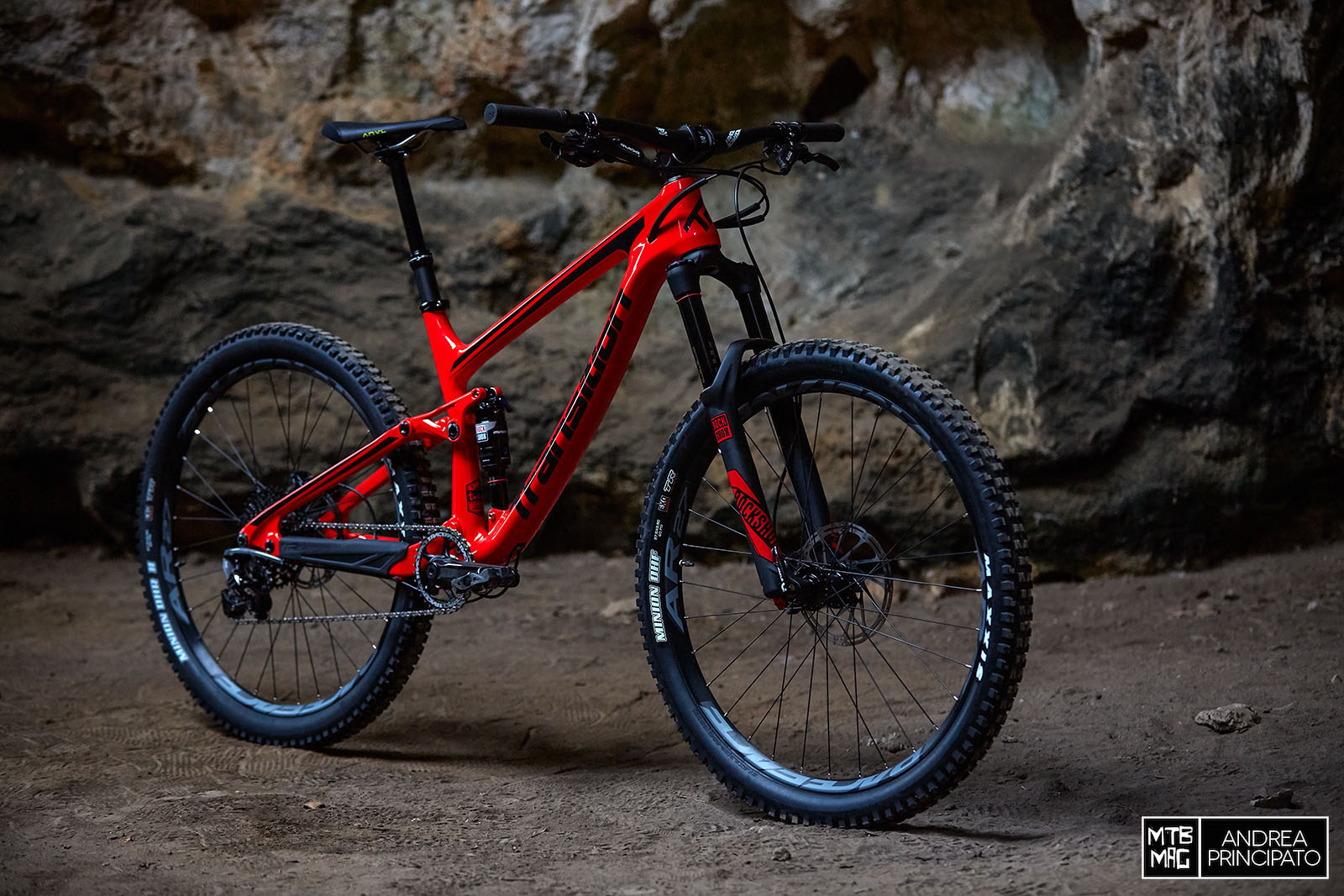 The drivetrain is supplied by SRAM with an 11-speed GX derailleur, shifter, cassette and chain, combined with a RaceFace Aeffect crankset with a 32t chainring and a threaded bottom bracket. The frame features ISCG mounts for those who want to install a chain guide or a bashguard. 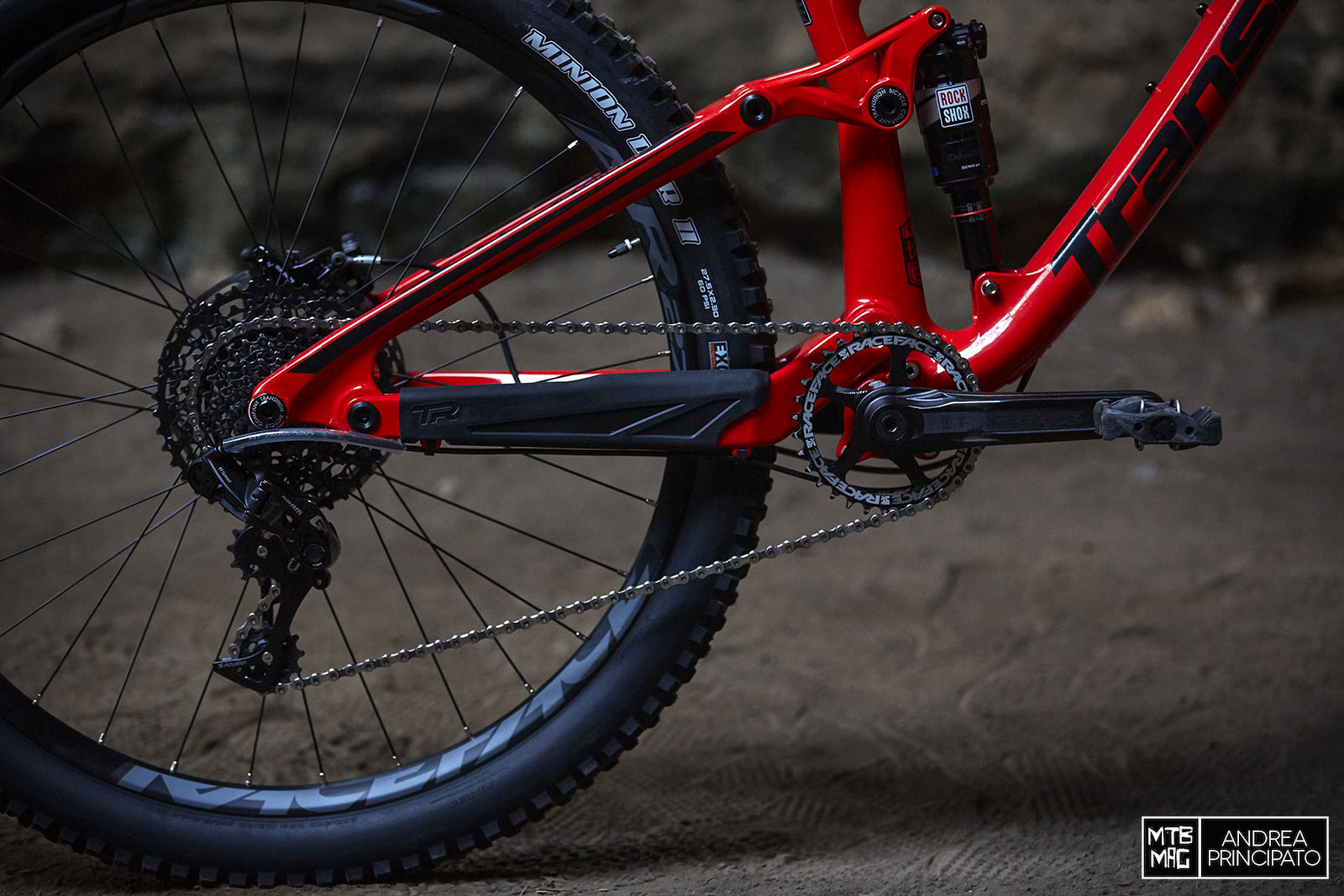 The brakes are also from SRAM; the Guide model is installed on all the 3 builds, with 180mm Centerline rotors on both wheels. A different version is mounted on each build: Ultimate on kit 1, RSC on kit 2 and entry level R version on kit 3 which we tested. Not just the Ultimate, but now the RSC and the R have the new S4 caliper installed, which, compared to the previous version, improves the overall reliability and performance, bringing flagship power and modulation to all platforms. 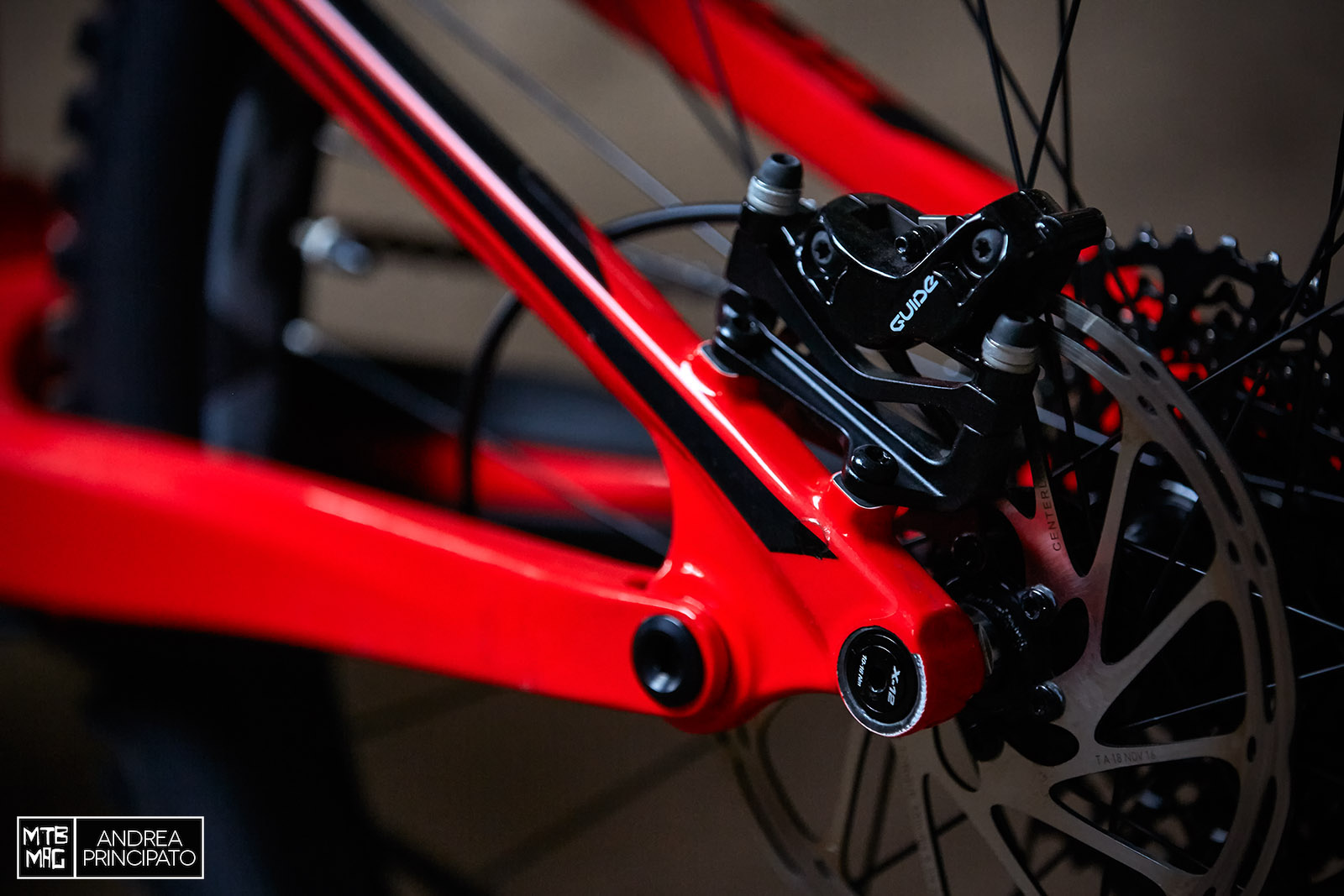 On the kit 3 build of the Scout Carbon, the 650b wheels are feature RaceFace AR27 rims with 27mm of internal width, 32 spokes on each wheel laced to a SRAM MTH 716 front hub (15×100) and MTH 746 rear hub (142×12). Tires installed are 2.3” Maxxis Minion EXO, DHF version on the front wheel and DHR version on the rear wheel, both with tubes. Transition really likes this set of tires and, changing only the compound, installed it basically on all their bikes: Smuggler, Scout and Scout Carbon, Patrol and Patrol Carbon. We also agreed with this choice since it suits the downhill character of the Scout perfectly. 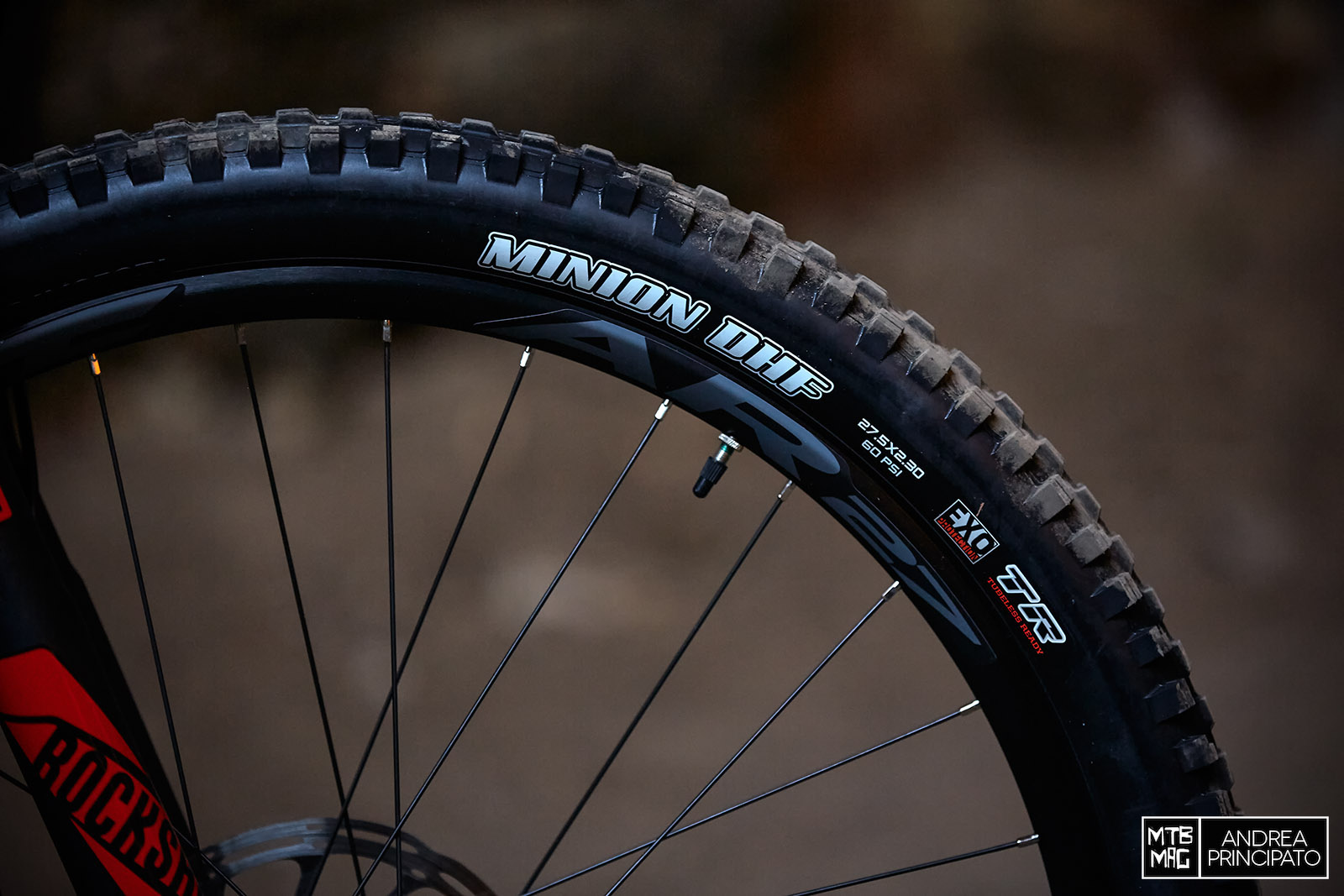 Both the handlebar and the stem are made by RaceFace with the 35mm standard on all 3 builds. Kit 1 and 2 are equipped with combined Turbine and Next components while on the tested kit 3 we find more affordable components: a Rise 35 handlebar 760mm width and 20mm rise accompanied by a 50mm Aeffect 35 stem. 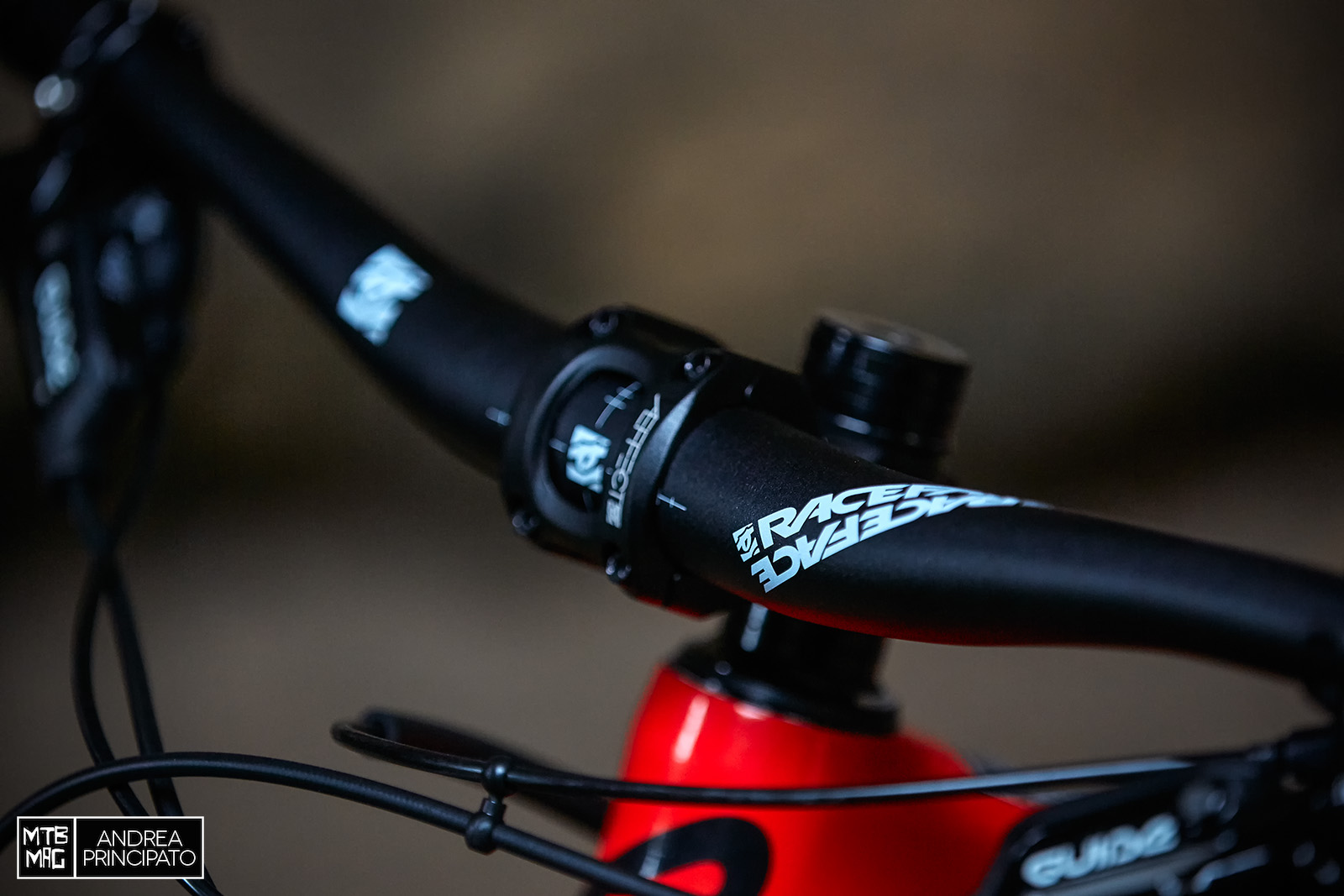 The dropper post is a KS LEV Integra with 150mm of travel. When you order the bike you can choose between 125, 150 and 170mm of travel, according to your needs. The same option is available for the RockShox Reverb Stealth installed on kit 1 and 2. The Lev is activated by the handy Southpaw remote, which features one of the most ergonomic levers on the market and a highly adjustable position. 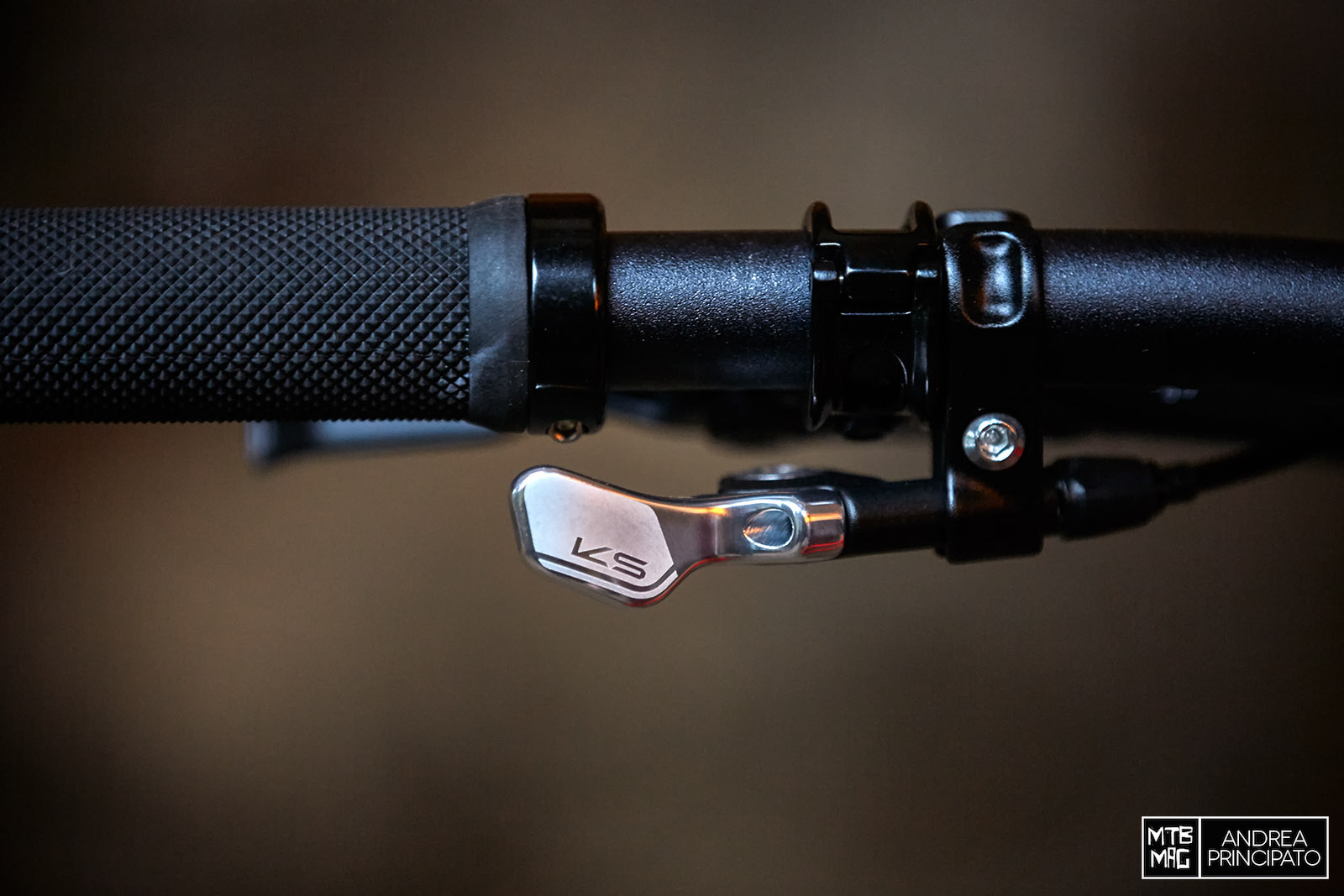 The cable routing is internal. The access ports near the steering area are well positioned and guide the cables neatly towards the bar. On the left side, the ports are equipped with inner guides for the shifter housing and the rear brake hose to keep them into position, to help avoid noises and possible infiltrations of water and dirt. On the right side, the dropper post remote housing port is not provided with an inner guide, in this case it would have been nice to have at least one external seal to keep the cable still, to avoid noise and infiltrations. To prevent frame scratches in the steering area, Transition provides neoprene covers for the cables. The chainstay is protected thanks to a solid and large rubber chain guard. The seat stay is not protected but we haven’t had any issues since there’s a pretty wide clearance between the stay and the chain. No rubber protection at all is provided under the down tube but a slim transparent film, over which the Italian distributor Tribe positioned a stronger Shelter tape on the tested bike. In that point, cables coming out from the frame are fixed thanks to a nice tight seal with a hex key bolt. The suspension system with vertical shock allows the bike to have a large space to fit the water bottle cage. 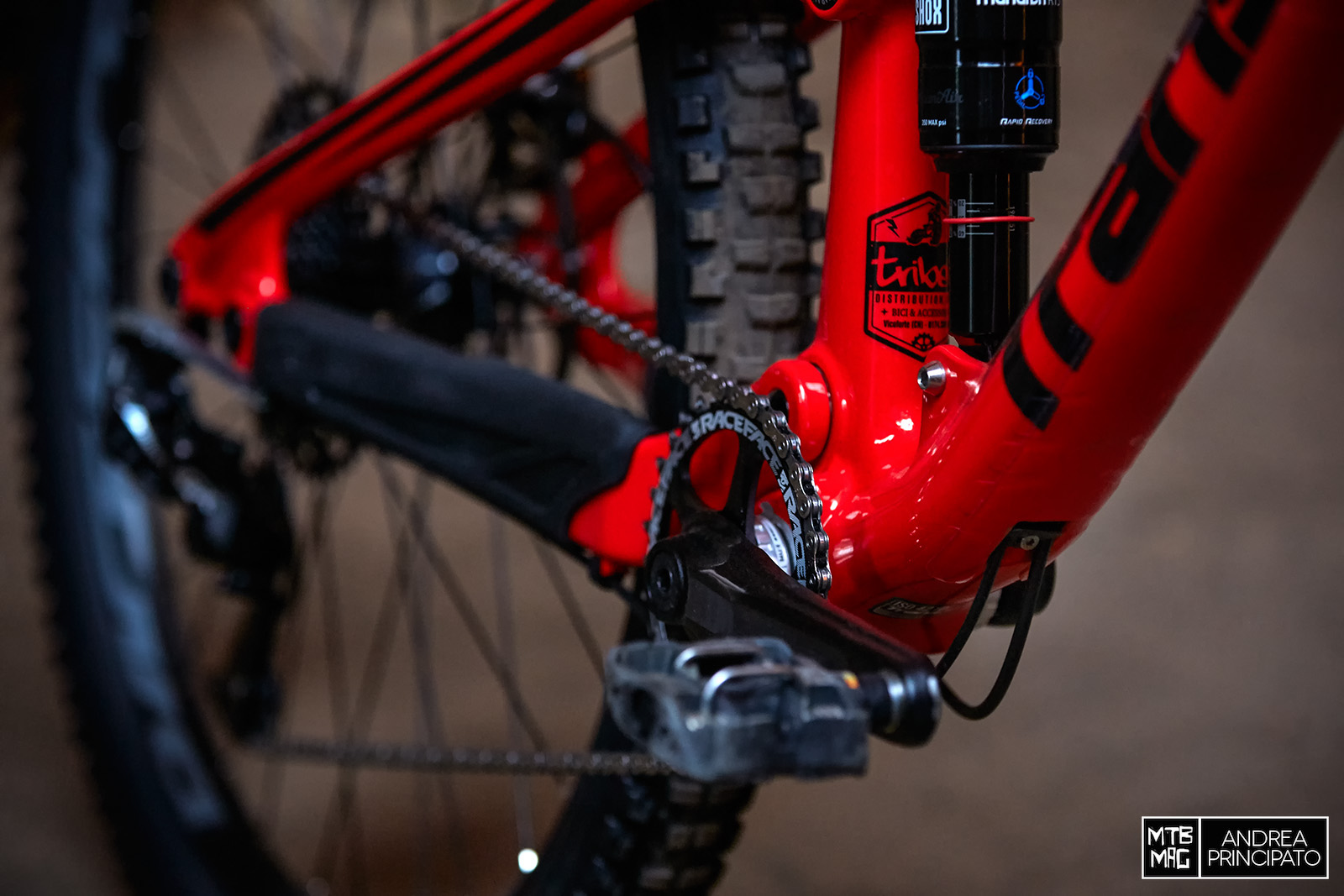 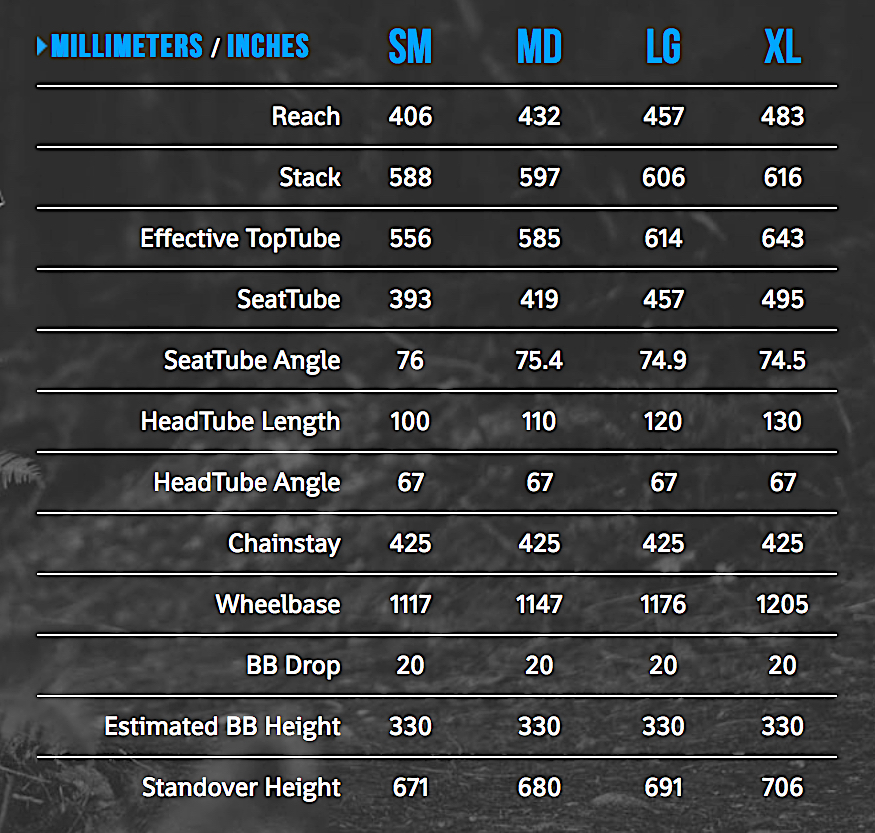 The riding position on the saddle is comfortable and you feel completely “inside” the bike thanks to the low, long and slack geometry. Given the 13kg weight, more similar to that of an Enduro than of other competitor’s bikes in the same segment and price, the Scout Carbon doesn’t stand out for its light weight. Despite that and the aggressive tires, pedaling is not too tiring on long and fast climbs, or when things get steep. The almost complete lock out of both suspensions helps not to waste too much energy pedaling on flat and compact surfaces, as well as when you push hard standing on the pedals. When we first faced a technical section, we were surprised by the performance of the Scout Carbon. Considering the more downhill oriented character, we didn’t expect such a performance climbing on rough, steep and curvy terrain. It is on these kind of sections indeed that the Scout shows its climbing qualities: it is incredibly precise, maneuverable and intuitive, providing full control even in the most difficult situations. We were able to easily ride through some passages of our home trails which have always caused us some difficulties. The choice made by Transition to have a a low bottom bracket, thanks to the short travel compared to some competitor bikes, provides the Scout with stability without the risk of hitting rocks with the crank arms, despite the abundant recommended sag. The progressive compression rate together with a balanced tune of the shock in Pedal position, gives really good traction even in the most bumpy, offbeat sections. The aggressive geometry and the assertive riding position make the Scout a Trail bike particularly at ease in the downhills. It is intuitive, wieldy and well balanced, entering the corners easily and precisely. It is also super nimble in changes of direction as well. The front end conveys a sense of safety encouraging you to load the weight on the front wheel in order to have the maximum possible traction while cornering. Out back, the rather short chainstays, enable you to exit the corners with agility and speed. Those characteristics are appreciated on mixed terrain, with back to back tight turns followed by fast sections. But it is on technical steep descents that the Scout shine: its precision and nimbleness are impressive, allowing you to choose aggressive lines with a great safety margin, almost comparable to an Enduro bike despite featuring much shorter travel. On fast and rough sections, the Scout has good stability which is encouraging at high speeds. The suspension works nicely in the central part of the travel, providing both good absorption and responsiveness. In this way, the bike is dynamic and reacts quickly to rider input, both soaking up big hits and popping off the ground in a lively fashion. The rear suspension works so efficiently, despite what you would expect with only 125mm of travel, that it might be an option to mount a 150mm fork to be even more aggressive in downhill without compromising too much climbing performance. By the way, Andrea Bruno, the former Enduro Italian champion, which now is the owner of Tribe Distribution, the Transition Italian dealer, rides a Scout Carbon with a 160mm fork. 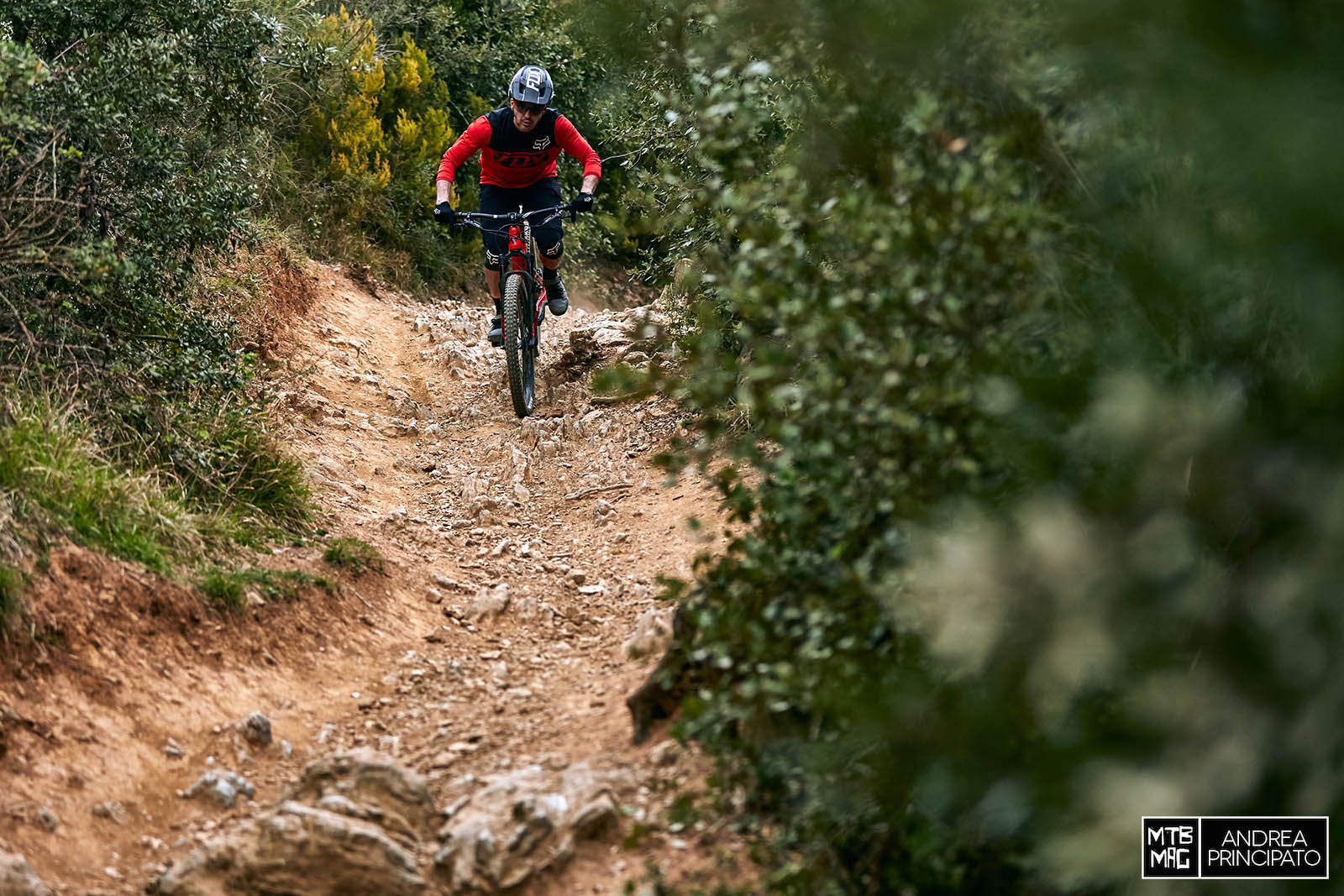 The Scout Carbon is a solid bike with a simple design and very good performance. Its high points are maneuverability, nimbleness and precision, most of all on technical sections both uphill and downhill. It perfectly embodies the spirit of the modern Trail bike: a tireless climber but fast and fun to ride downhill as well. All the builds are available in two colors: Gravel Gray and Blood Orange.