When Troy Lee Designs finally made their first attempt at a half lid that was meant for pedaling, it was an instant classic. Dubbed the A1, it was everything we’d expect from TLD – it looked cool, fit incredibly well, and was very safe…That said, it had one shortfall: it ran a bit warm. For a helmet with that level of protection it wasn’t bad by any means, but it certainly could stand to be improved, so that’s exactly what Troy and his team set out to accomplish with the A2. Along the way, it also received a great deal of other refinements and updates. 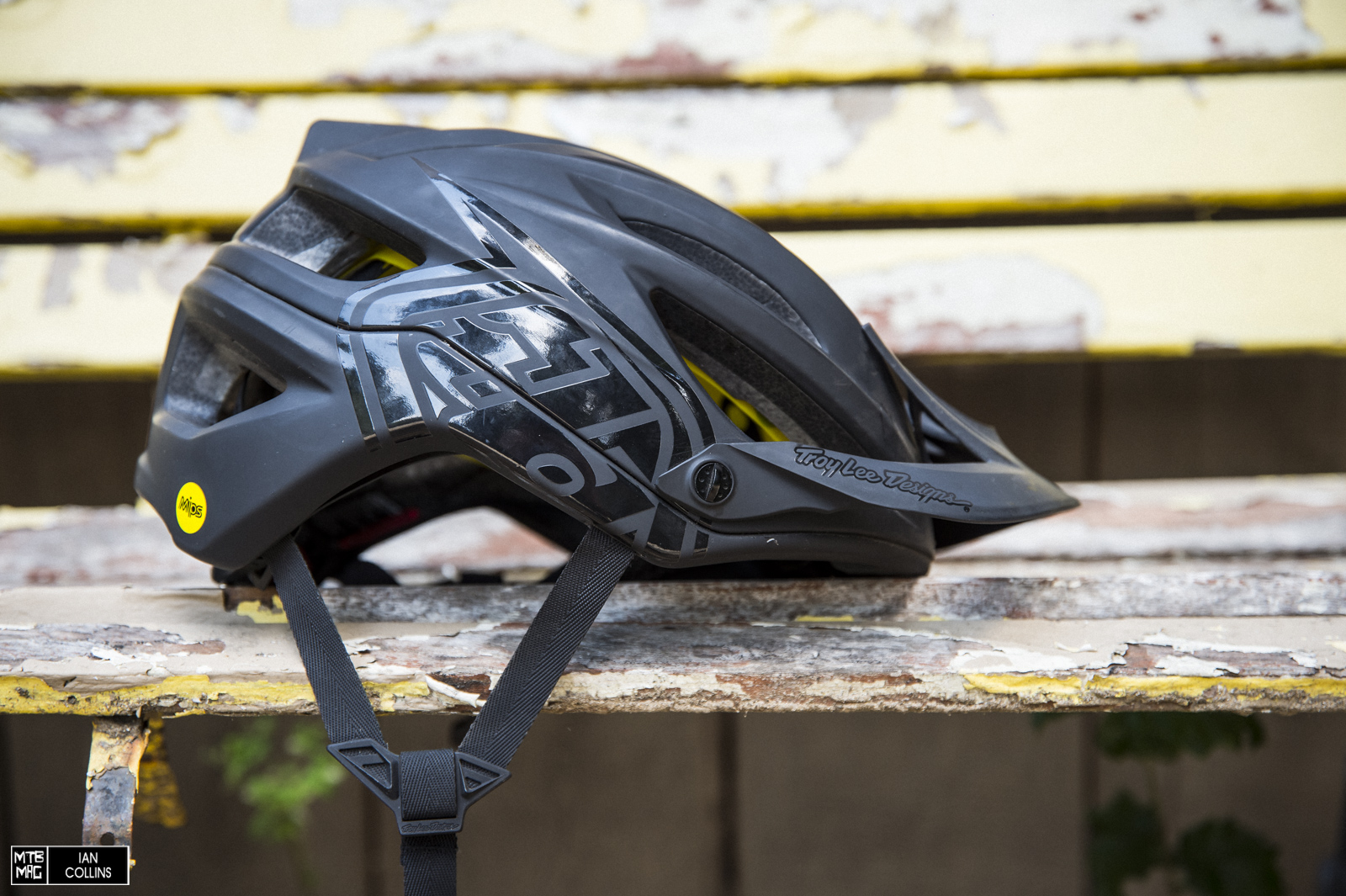 We initially received an early sample of the A2 which was subtly different from what is available at the moment. It was lacking the small, soft black pads that envelop the the MIPS anchor points (shown in the photo above)…Aside from that, the sweat liner’s surface was a bit less porous, but we didn’t really feel much of a difference between the two versions on trail. 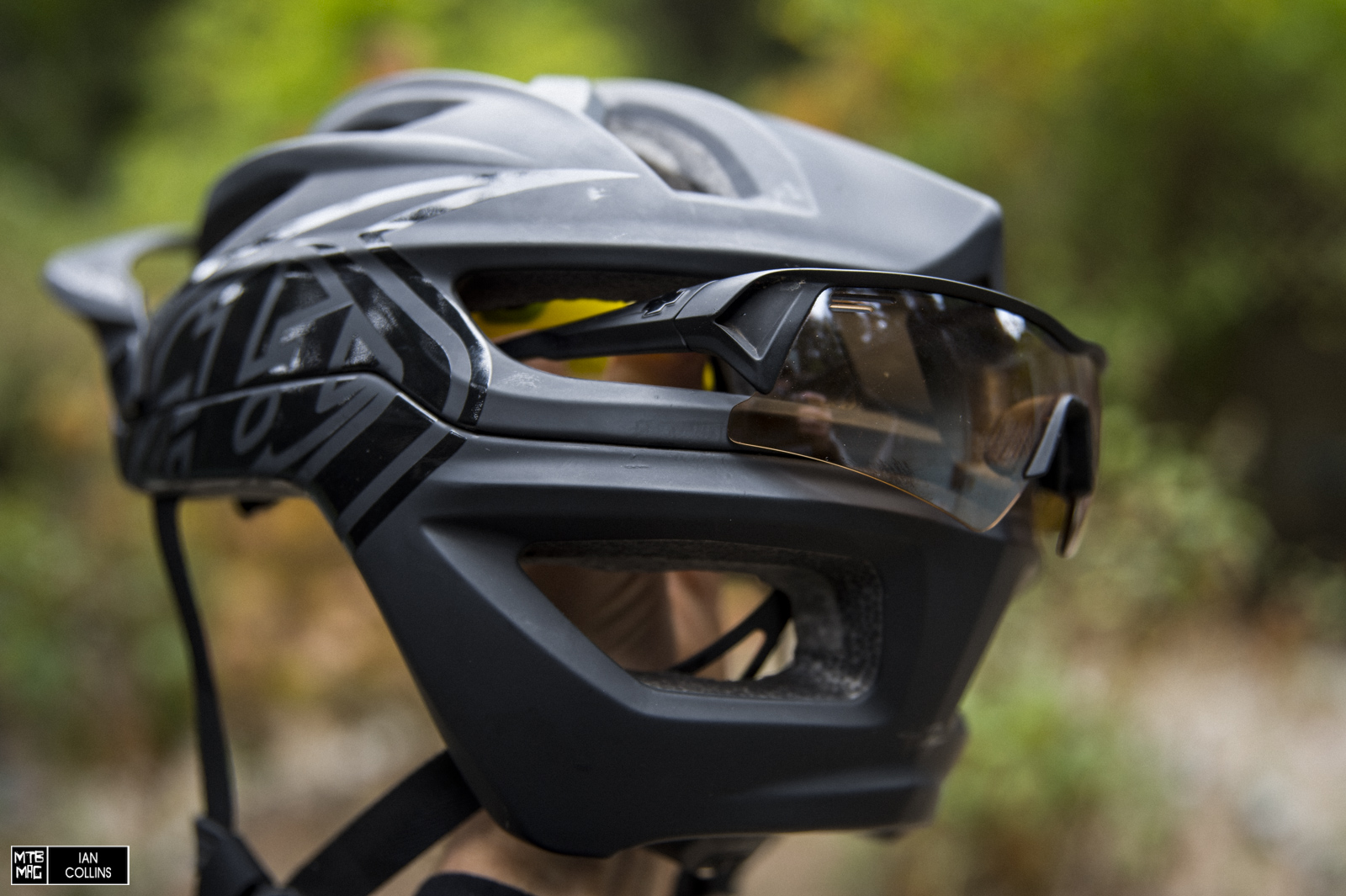 Perhaps our favorite amongst the more subtle of updates is simply the fact that you can stow your glasses on the back of the A2. These days, this is a surprisingly rare and wildly overlooked feature. 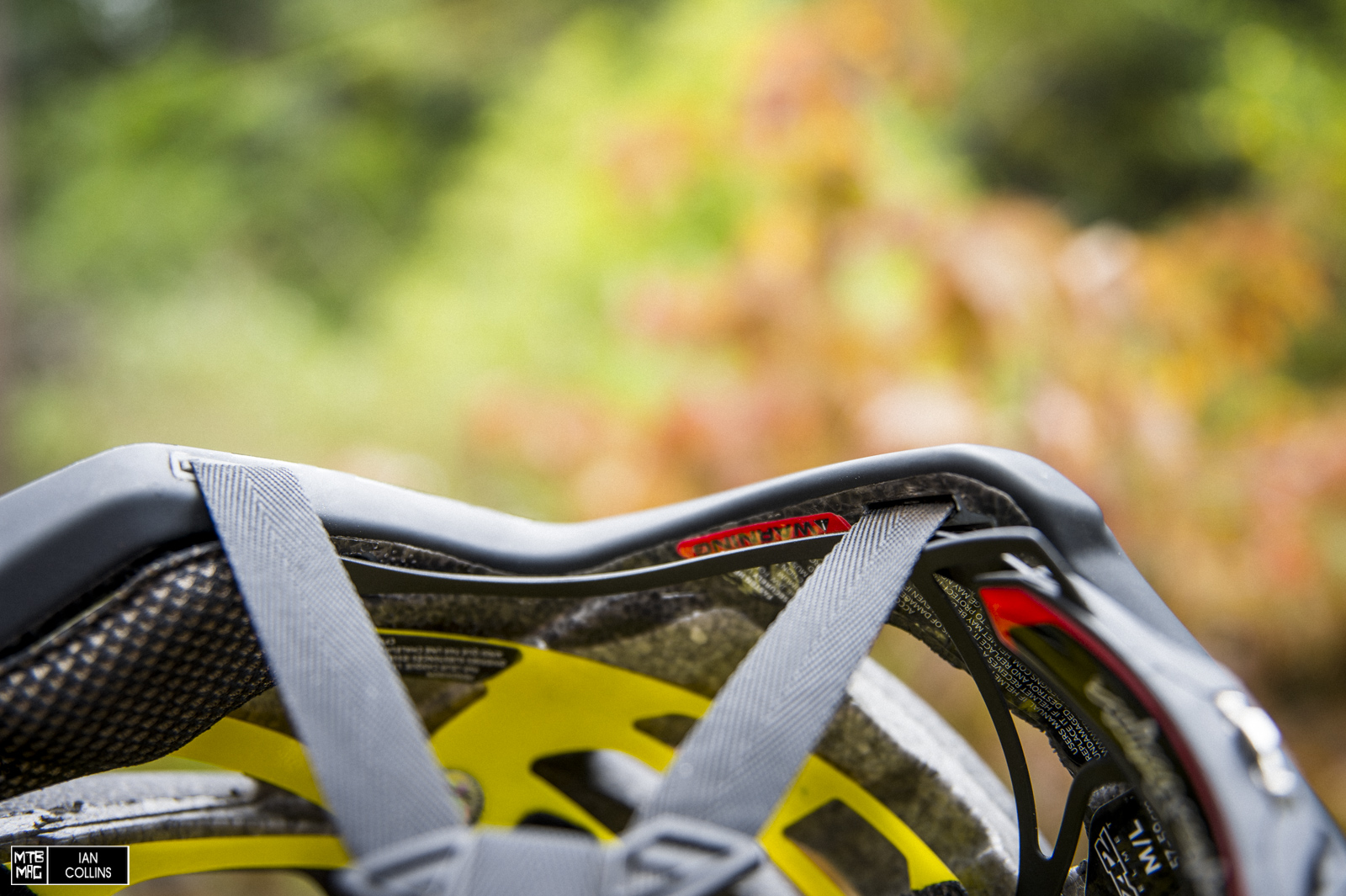 Much like the A1, the fit was spot on. On the fit side, it’s rare that you’ll hear someone complain that a TLD lid just doesn’t fit them right. One major improvement was the addition of the a fixed rear anchor point for the straps. Aside from the tension at the chin, there is nothing to adjust. As far as we’re aware, the first helmet in this category to do this was the Specialized Ambush. The bottom line is that unless you have an oddly shaped skull, the straps just sort of settle in on their own, without having to fuss around and try to balance them side to side, and fore/aft. 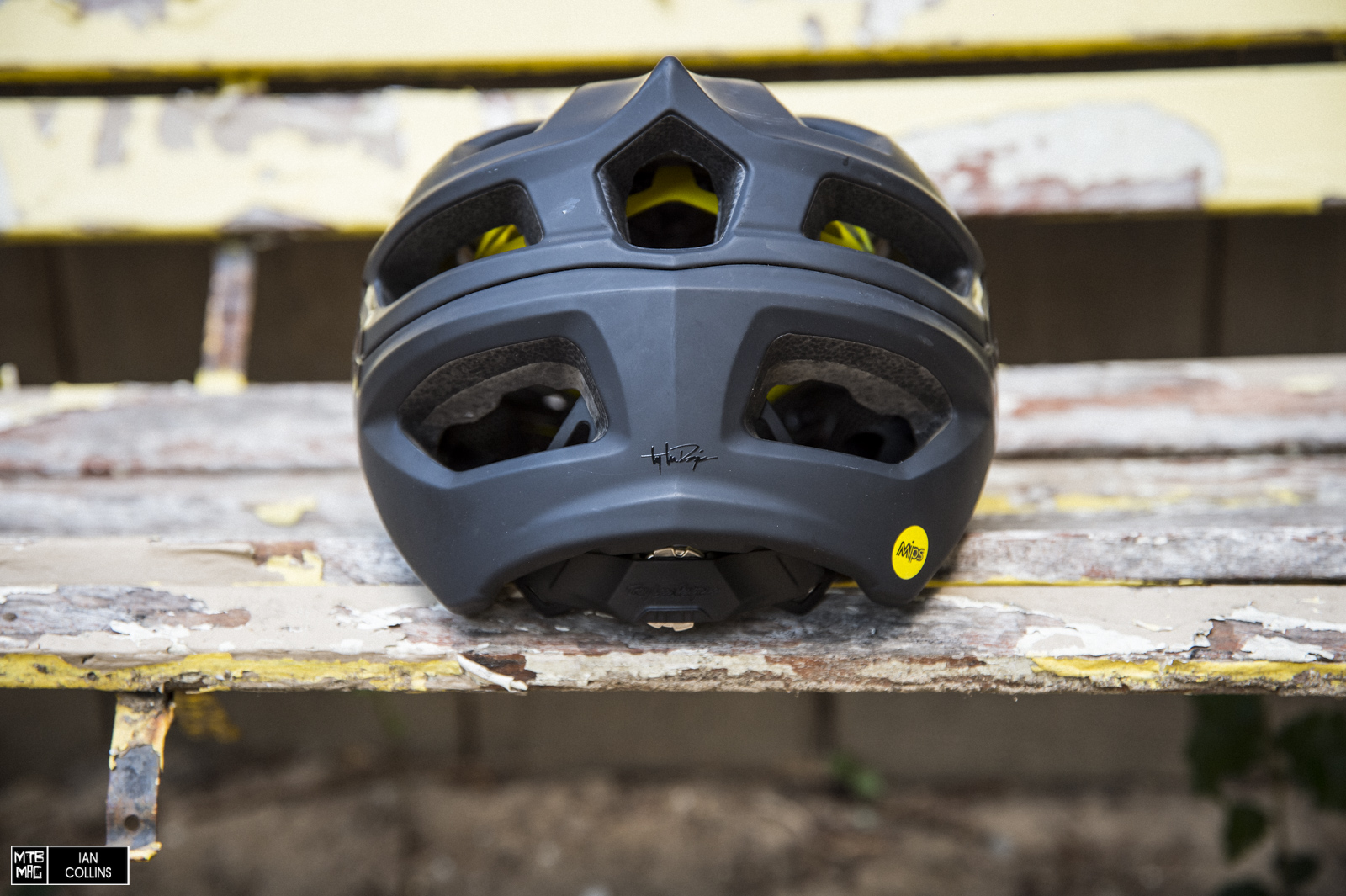 As far as coverage is concerned, lighter duty XC/Trail helmets aren’t all that much different than road helmets with visors added to them. If you’re considering an AM/Enduro half lid in the first place, it is likely because you’re looking for an increased level of safety and security. The rear of the helmet covers you at the base of your head nicely, about as much as the A1, but with much more vents as you can see in the photo above.

For this review, our time was split between two different A2 helmets. Straight away we appreciated both the fit and the fact that we didn’t have to fuss with the straps at all. One nuance with the strap system was that on our first ride we noticed the pointed ends of the plastic joints felt a bit disconcerting. As things settled in they quickly became an afterthought. Depending on the shape of your head and where these plastic bits rest around your ear/jaw, it might be a nuisance for some, so it’s worth pointing out. We noticed two other things right away, the sweatliner is massively improved as is the ventilation. The A2 runs much, much cooler than the A1. 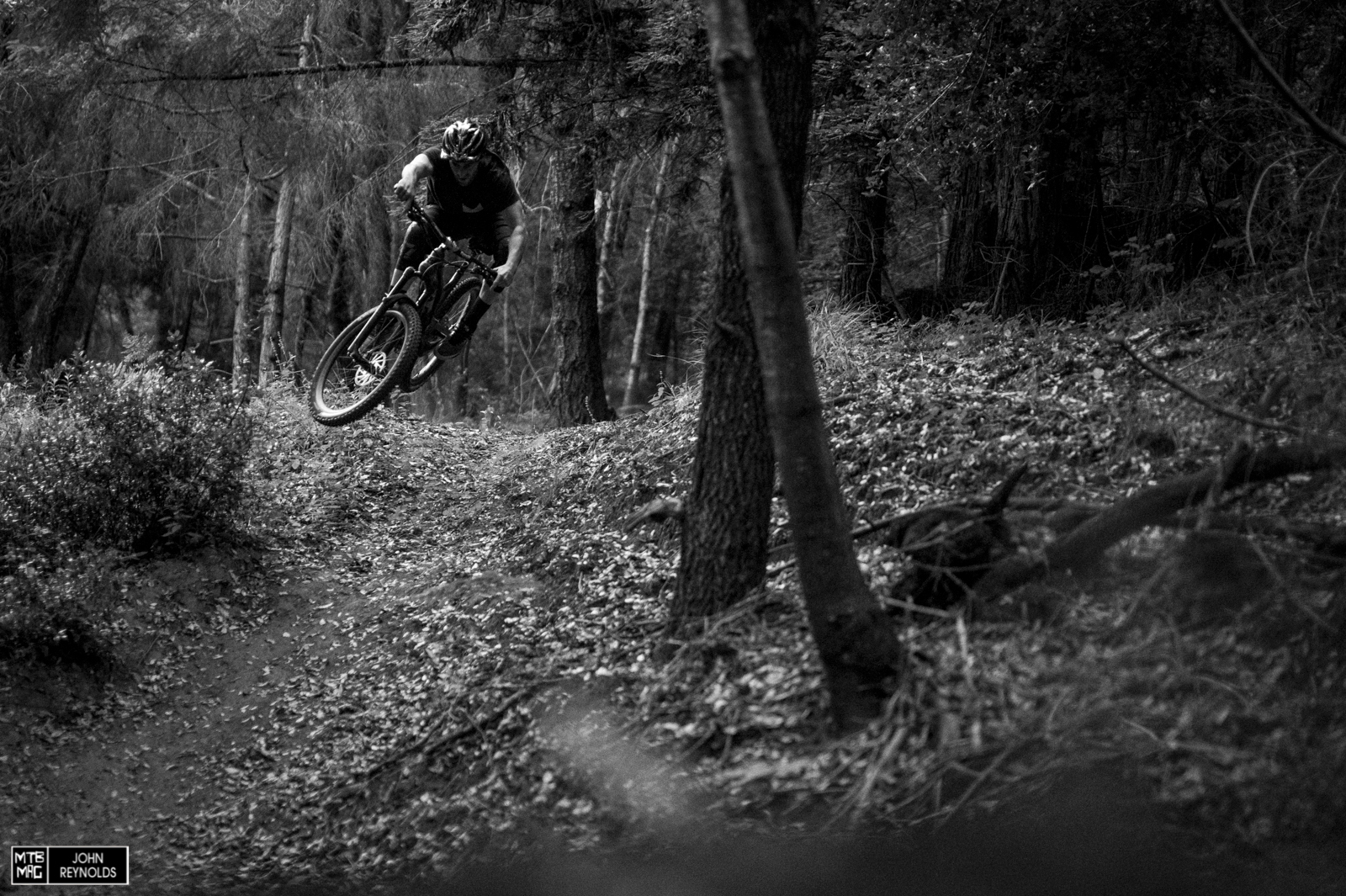 As mentioned before, the stowage for eyewear is excellent. Our tester doesn’t really mix half lids and goggles but he did dabble with some to make sure that the A2 plays nice. Goggles even as big as Scott’s Prospect fit just fine so that shouldn’t be an issue. Due to the MIPS layer, it’s a bit tough to jam glasses in while you’re riding, but we’re reaching for things to complain about at this point. As far as on trail feel goes, we are super impressed. The retention system is very comfortable; with sweaty and/or bare hands, it’s slightly difficult to adjust the dial in its most tucked in position. All in all, between the straps, the excellent fit and the retention system, the A2 hugged our tester’s head nicely – even on violent, rough sections of trail. The visor is sturdy and minimalist, fixed with high end hardware we basically set it and forgot all about it. 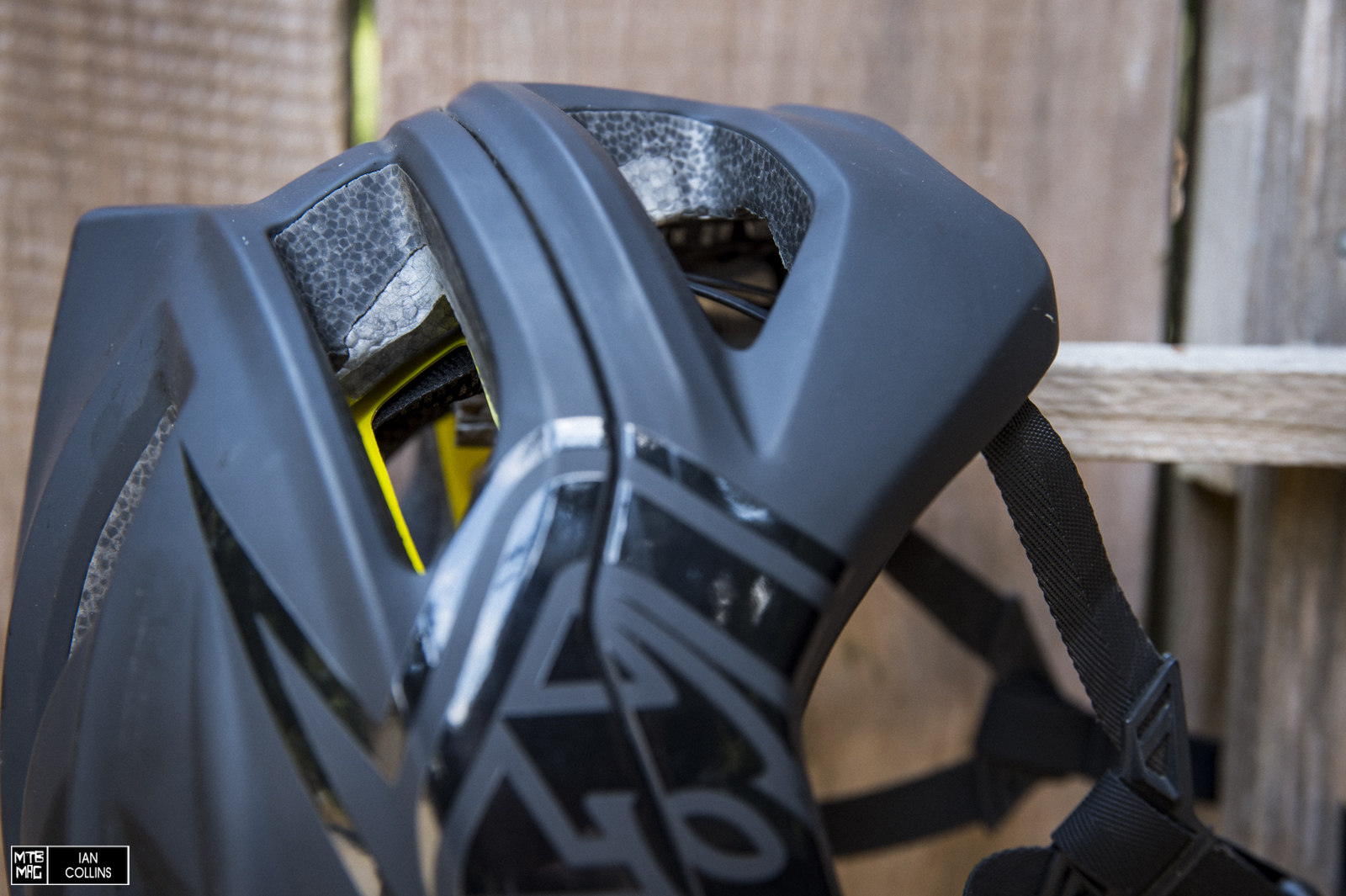 A couple of things that are certainly worth mentioning are the additional measurements taken toward increasing the helmet’s safety. MIPS seems to be somewhat controversial and within the bike industry, there appears to be mixed views on just how effective it is. With that said, while we haven’t put it to use (knock wood) the dual density EPS/EPP combination is a step in the right direction for impact absorption. Suffice to say, our tester actually has taken some rather nasty crashes in the A1 back when it was launched back in 2012. The photo above shows the two layers fairly well; the lighter colored inner layer is a bit softer and in the event of a crash, it’s gentler physically on your head. The outer layer provides more structure, so you really have 4 layers at work: MIPS, EPS, EPP and the Polycarbonate shell. Lastly, it’s hard to make any bold claims about the effectiveness of the raised EPS splines, but they likely do add a bit more impact protection and certainly are easy on the eyes.

When it launched in 2012, the A1 was an excellent helmet. 5 years later, TLD launches the A2 and it goes above and beyond addressing the A1’s shortcoming (heat)…It’s safer, even more comfortable, more well rounded and plays nicer with eyewear. Our only quips with it are very, very minor in the grand scheme of things. If you’re on the fence, try one out for fit at a local dealer…All in all, it’s a truly excellent helmet.