A month ago we received a brand new Unno Dash frame, and today we’re presenting the results of our test. It is one of the most exclusive bikes on the market, produced in only 50 units per year. The entire carbon construction process takes place in Barcelona, ​​Spain, as well as assembly. The components you see here are part of our custom build, and differ from the completes sold on the Unno website . 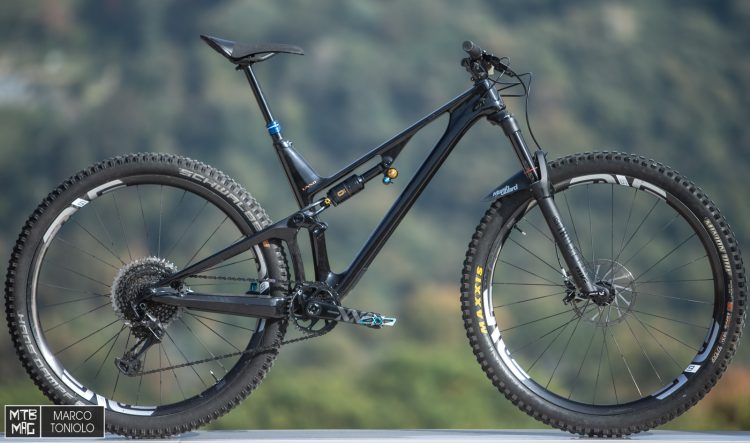 The Dash is the bread and butter trail bike from the Spanish brand’s lineup, with 29-inch wheels, 130mm of rear travel and 140mm up at the front. The kinematics are developed in house and named “dual suspension link”, ie a virtual pivot point equipped with a solid, rear end closed on both sides and with very strong linkage, connected to the frame by sealed, oversized bearings. I won’t dwell too much on the build because, as mentioned, it is a test bike with parts that vary from the builds that Unno offer. Instead of the Reverb I installed a Yep Uptimizer 155mm. The Maxxis with a 1.3kg DH casings have been replaced by a Minion DHF Exo 2.5 “at the front and a Schwalbe Hans Dampf TL Soft 2.35”, since downhill tires don’t make any sense on a trail bike that you ride uphill. If you wonder why they were mounted just look at the name behind Unno Bikes: Cesar Rojo, former world champion of DH. When asked about the choice of tires he candidly replied “It was what I had around and I put it on“. We also see that Cesar brakes very little, because he specs SRAM Guide RSC with 180 / 160mm discs. At first, it was almost like not having them. After putting on a couple of new pads, my tune has changed a bit, if nothing else. 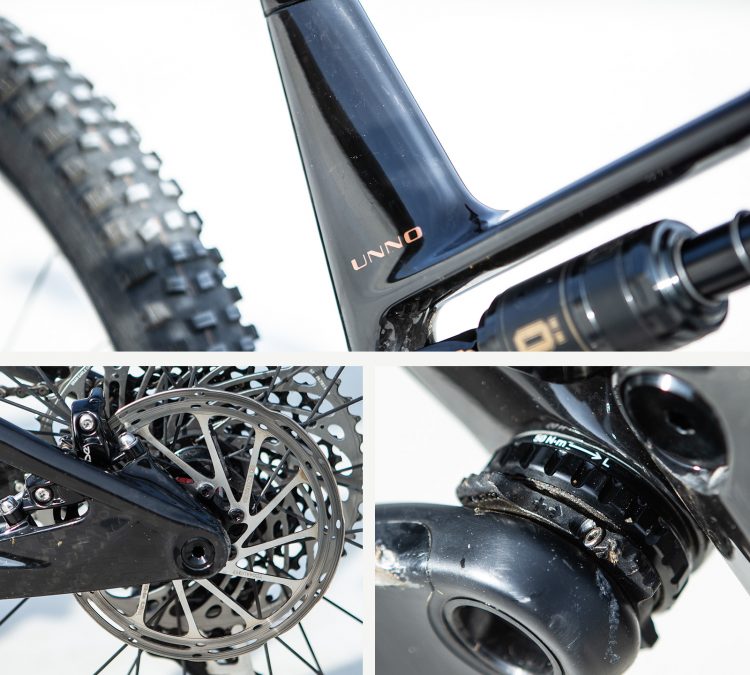 The complete Dash weighed in at 12.59 kg. Not exactly feather light, but the purpose of this article is to talk about the frame and its nature. You don’t have to be deceived by the word “trailbike”, because with Unno’s definition that means a type of bike that lets you ride well uphill, but downhill is the focus. The general design of the frame does not spare material, in fact we find it in abundance everywhere, starting with the seat tube: to tighten the seat post requires a lot of strength, to prevent it from slipping side to side, just due to the thickness of carbon.

Another example, the hole to fix the upper shock mount: to avoid threading the frame, Unno chose to put a bolt similar to a flip chip, but note that it’s not possibile to change the geometry of the bike. Even the bottom bracket is threaded, tipping the hat to easy maintenance.

One thing that can’t be seen in the photos but which has proved to be phenomenal is the paint: it’s very resistant to impacts and scratches, even if tending to be transparent. The housing of the cables is internal and guided. The grommets that seal the holes are easy to pull out and put back into place. There is a mount for the bottle cage, but it is necessary to mount one with a side entry because the top tube is very sloped (read: good standover) and prevents the bottle from being taken from above. The rear dropout is robust and is held in place by the derailleur hanger. Its square shape prevents it from turning on itself. 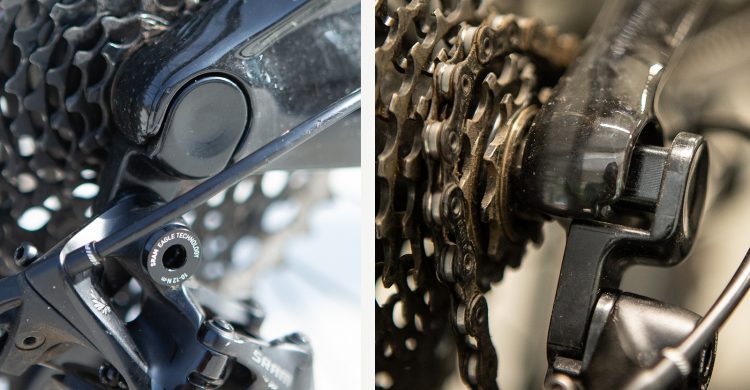 I personally like the “all black” look very much, as it is is suitable for a bike with a frame so exclusive and, above all, will never get old or go out of style, which can not be said for frames painted with bright colors. Beautiful also is the writing with the chassis number and the year of production. 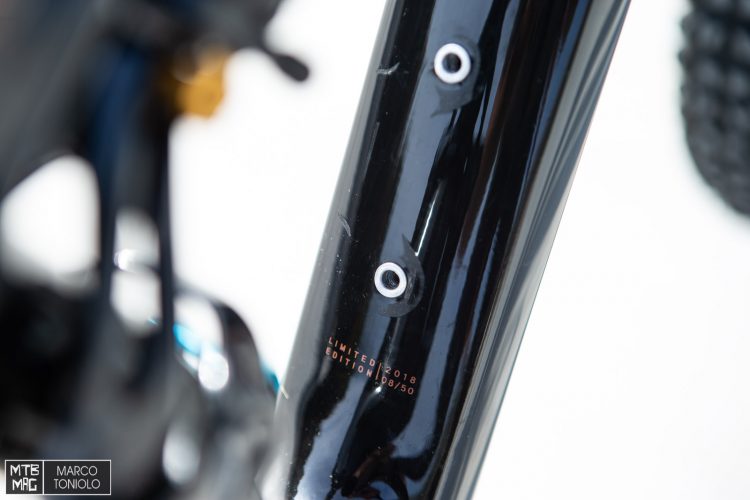 The geometry of the Dash is modern and at the same time aggressive: a 65.5° head angle, steep seat angle of 75.5 °, 455mm reach, mated to 430mm chainstays. The size is unique, a sort of M / L on which I, at 179cm tall, found myself quite comfortable. Soon, a larger size will be available. As you can imagine, being a small company, each mold affects the costs and they prefer to enter the market slowly, seeing how it reacts before making other investments. By the way, it is not true that behind Unno there is a large industrial group, but Cero Design, the company founded by Cesar himself.

The positioning in the saddle is beautifully central and balanced, I found myself immediately at ease, while the suspension set up was easy. All too easy in fact, as far as the Öhlins STX 22 Air shock is concerned, because the settings are totally irrelevant: turning the rebound and compression knobs doesn’t result in much change, especially the black one with which the lever should firm up the high speed compression for climbing. This was an issue that I had already noted on the Specialized Enduro, and to which Öhlins has addressed with their new products that we presented a few weeks ago . 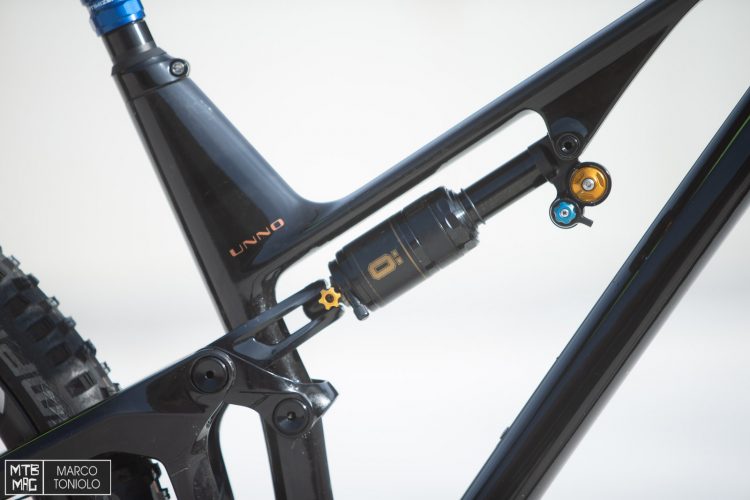 Fortunately Andreani had sent me the same shock, of the right length and excursion, a few months ago, modified just to make sure that the adjustments were felt. Especially the “on the fly”, in the hardest position, which now has a clear closure that locks the rear suspension nicely. Not so much on technical climbs, but on climbs on asphalt, I like to have the suspension extremely stiff to push into the saddle and mash on the pedals.

The rear suspension is quite neutral pedaling, in fact on the bumpy bits I always left the shock open without noticing a negative expenditure of energy. The bike is sensitive to the small bumps and it is easy to get the bike up to speed. The Dash climbs well, but in the “trail bike” market you can find better, as the geometry already suggests. A head angle of 65.5 °, 140mm of travel, and weight, says a lot about the character of the bike – more devoted to the descents than to the climbs. The Enve rims with a 35mm inner diameter allow you to keep the tires at low pressures (1.4 bar in front and 1.5 out back), thus gaining traction, and the steep seat angle helps keep the weight forward especially on steep punches. In fact, the front does not tend to pop up or wander.

I still do not understand how Enve can sell their wheels with the low end DT Swiss star ratchet with 18T instead of 54T. It’s even harder to understand because at the time of writing, they are one of the most expensive set of wheels you can buy. Given the hubs that are on the wheels of their competition, such as the Project321 hubs’ 144 points of engagement on the new Crank Brothers Synthesis, it is something that Enve should remedy. On the trail, you can clearly notice, when the freewheel takes so long to engage, precisely because we are accustomed to hubs which perform better from this point of view. It seems like a little detail, but when you have to give put in a decisive pedal stroke exiting a turn, you immediately notice the difference. 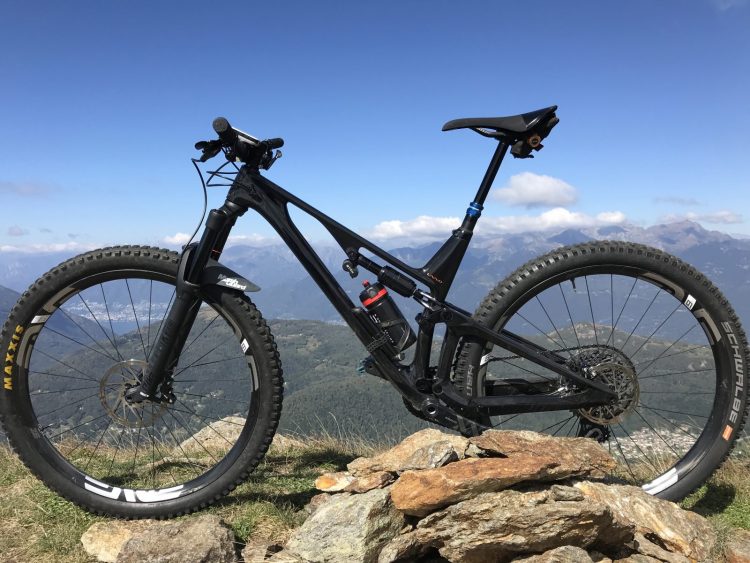 I made several long loops and on many trails in the hills, managing to clean all the difficult sections. I removed all the spacers from under the handlebars, and with a Renthal Fatbar Lite at 780mm wide and a 40mm stem, I found my ideal position to give me enough leverage steering. Removing spacers is something I do with all 29″ bikes, for the record. In any case, the Dash is at ease on long alpine rides, if you are not too fussed by the weight. In fact, I didn’t particularly notice it, but I did appreciate every ounce of extra strength on the downhills.

Believe it or not, I managed to be faster downhill with the Dash than with 29 bikes with longer travel. We’re only talking about a few seconds, so it could also be attributable to my form on the day, but what I noticed was the extreme precision with which I could choose and follow twisty, ragged technical paths, thanks to the rigidity of the Dash. Rigidity that sometimes was too much because, let’s not forget, the Enve M635 (fitted as standard) are very rigid too, but that gives an incredible confindence. In a nutshell: I opened the brakes on the battered bits and let the bike do the rest. The Enve’s have not batted an eyelid at various bottom outs of the tires, just as the tough frame has not been nicked by rocks.

The feeling of the Dash is sporty, in the sense that the rear suspension gives a lot of feedback from the ground: it is not the cushiest ride, but the kinematics that make you feel exactly what you are doing. You must therefore work your legs and arms but, as mentioned above, I didn’t have to worry about choosing the cleanest lines because the bike does not falter. It is self-evident that it is easy to pump over obstacles and the bike supports heavy input, and is quite comfortable in the air. The travel becomes very progressive towards the end – I never did fully bottom out, although I used about 25% of sag throughout most of the test. Also interesting are the bearings – Enduro Bearings Max with generous dimensions that are well matched to the massive structure of the front and rear triangles.

On the slow technical bits, I liked the Dash’s ability to take hits, while keeping the line chosen despite whatever was thrown at it. I really had the impression of being on an extremely stable rig, but partly thrown off by the braking: I deliberately avoided some long steep descents just because I knew that the Guides, once overheated, would have had little braking power despite the new semi-metallic pads I had installed. The 160mm disc out back makes no sense if the brakes are already a little weak.

It’s worth discussing whether it is necessary to fit rims with a 35mm wide inner channel, standard on the Dash. Personally I would stop at 30mm, to shave a few grams, but I have to say that these Enve M635 are really robust, precise and take away any worry about the obstacles you’ll inevitably impact, as long as the tire is not destroyed. Speaking of tires, with rims so large it is better to mount nice, wide tires: I find that 2.5″ is the right size to avoid becoming too squared off. The wide rim/tire combo provides a great deal of confidence, primarily for the traction and additional small bump absorption provided by the generous volume. The frame is designed specifically for wide tires up to a maximum of 2.5 “. 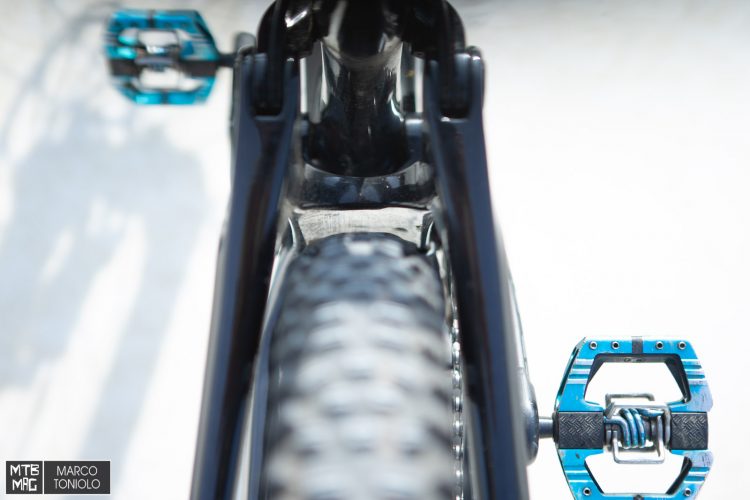 The Unno Dash is a downhiller’s trail bike, with a very rigid, precise frame and a bomb-proof paint finish. Despite being an artisanal product made in Europe, it has lower prices than some competitors that come from the East, especially considering the carbon wheels. This is one big factor that should stimulate the potential buyers of such an exclusive bike.

[Video] #FollowCamFriday – Hunting For Gelato in the Alps