SRAM have been focusing deeply for the last few years with drive trains on their X1/X01/XX1 series group sets all based around the 1 x 11 gear system. However it has taken a long time for these components to trickle down into the mass bike market especially around the €2000-€3000 price point where the majority of bikes are sold at. In these spaces for now the 2 x10 systems still persist as the go to for OEM builds.  This is where SRAM’s staple of X5-X7-X9 components continue to persist.

Our group test recently showed only one bike actually having Shimano or a 2 x 10 system. If the move to 1 x 11 gear ratio’s would have been an issue nowadays, bikes wouldn’t have the 1 x 11 set up. In fact recently we have seen with the release of Shimano and their Di2 electronic shifting that even with a 2 x 11 system, with the ideal set up pre-programmed into it,  they still only uses 13 gears in auto mode. With Shimano starting on a 40T cog as their first gear, they still don’t have the number of gears that one might think a 2 x 11 system would be set for .

All the recent noise in the drive train market leads us to the clear idea that we are in a transition phase, not to a simpler market all with 1 x 11 but into a world where riders can possibly choose every gear/drive option under the sun. Before that world gets too messy we thought it would be an ideal moment to have a look at SRAM’s X7 group and X9 group (in a later test) to see where this part of the market still is technically and performance wise, and also see if it will loose something by the large scale push to 1 x 11 in the Trail/Enduro market which will eventually filter down to lower price points.

Remember the multiple front chain ring style of gear systems are still the mass market leading shifting methods to this day, despite the huge focus in the press and advertising being on the high end group-sets and their movement to 1 x 11. With all this complicated picture in mind we stepped back to a 2 x10 system and mounted the X7 drive train. With three versions of their X7 range available, grip shift, 9 speed or 10 speed, we tested the 10 speed trigger shifter 2 x 10 build. 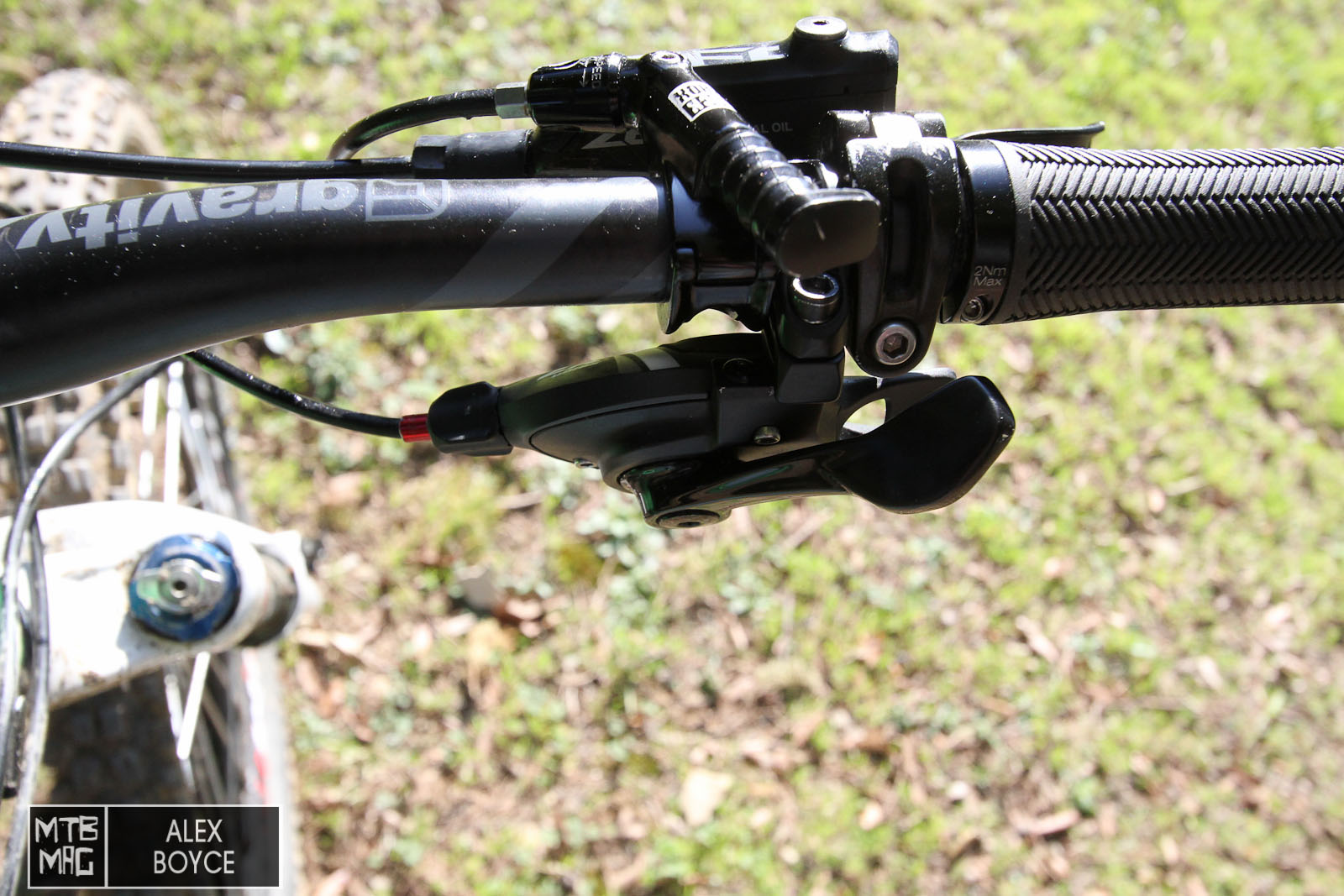 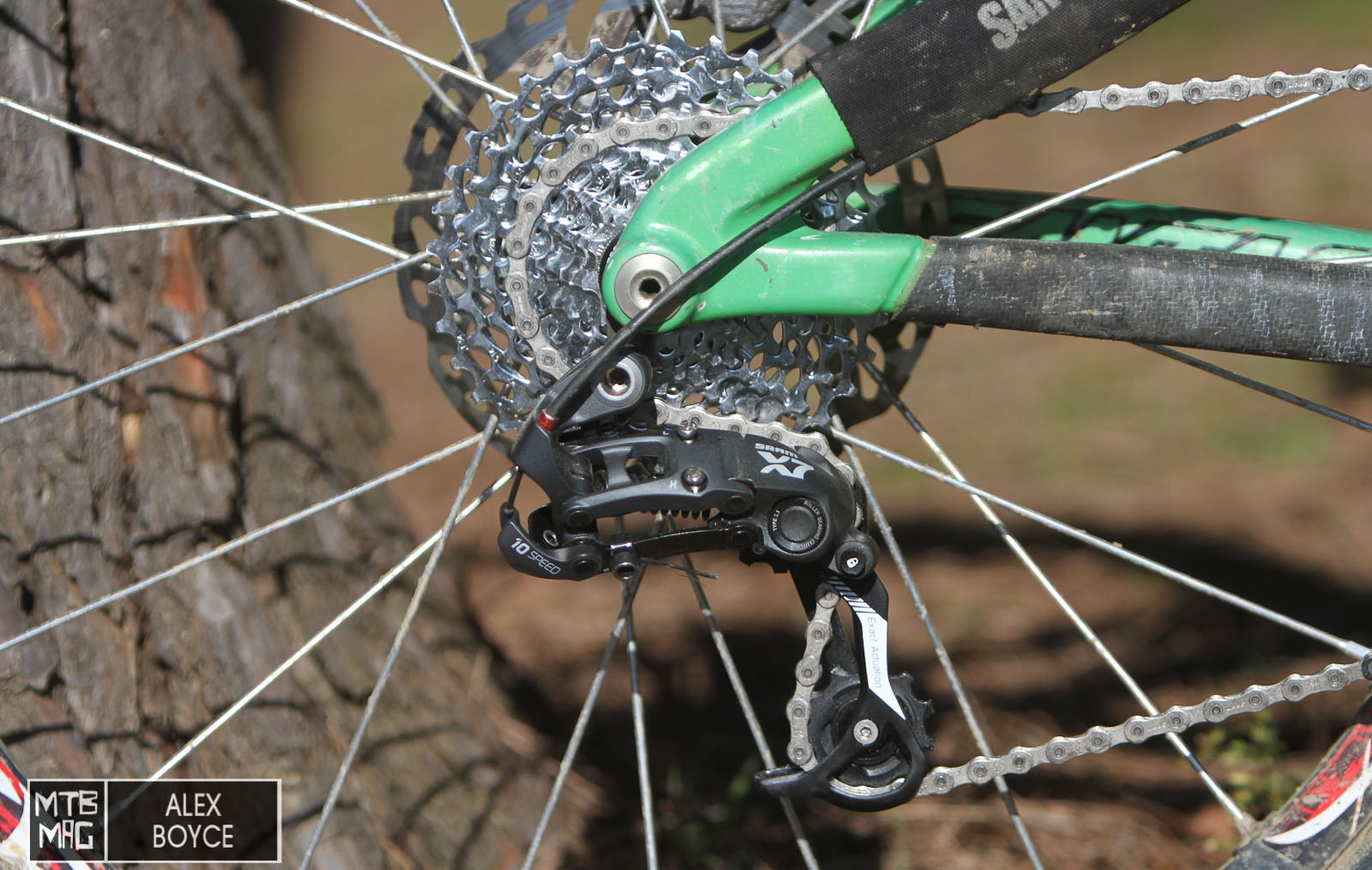 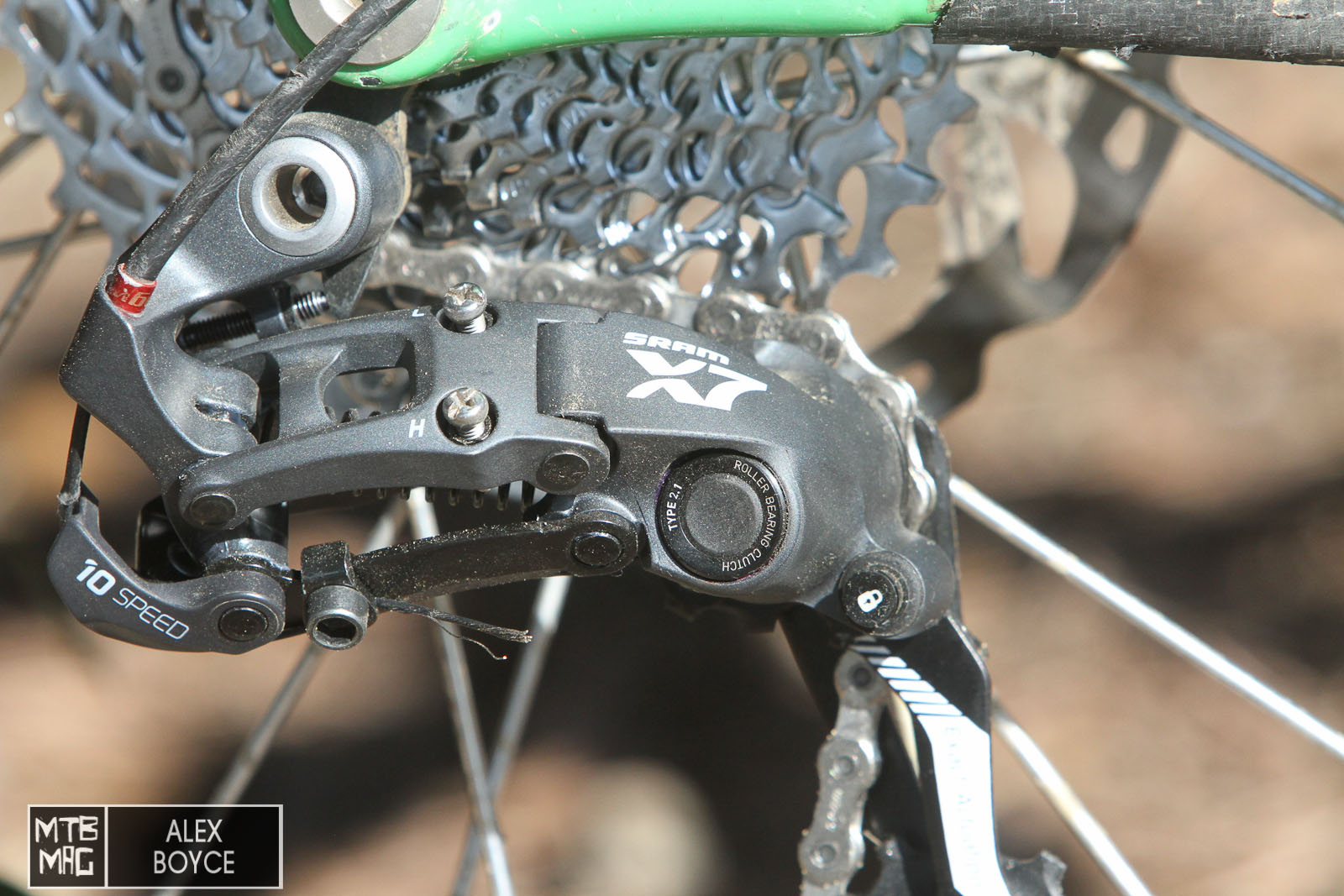 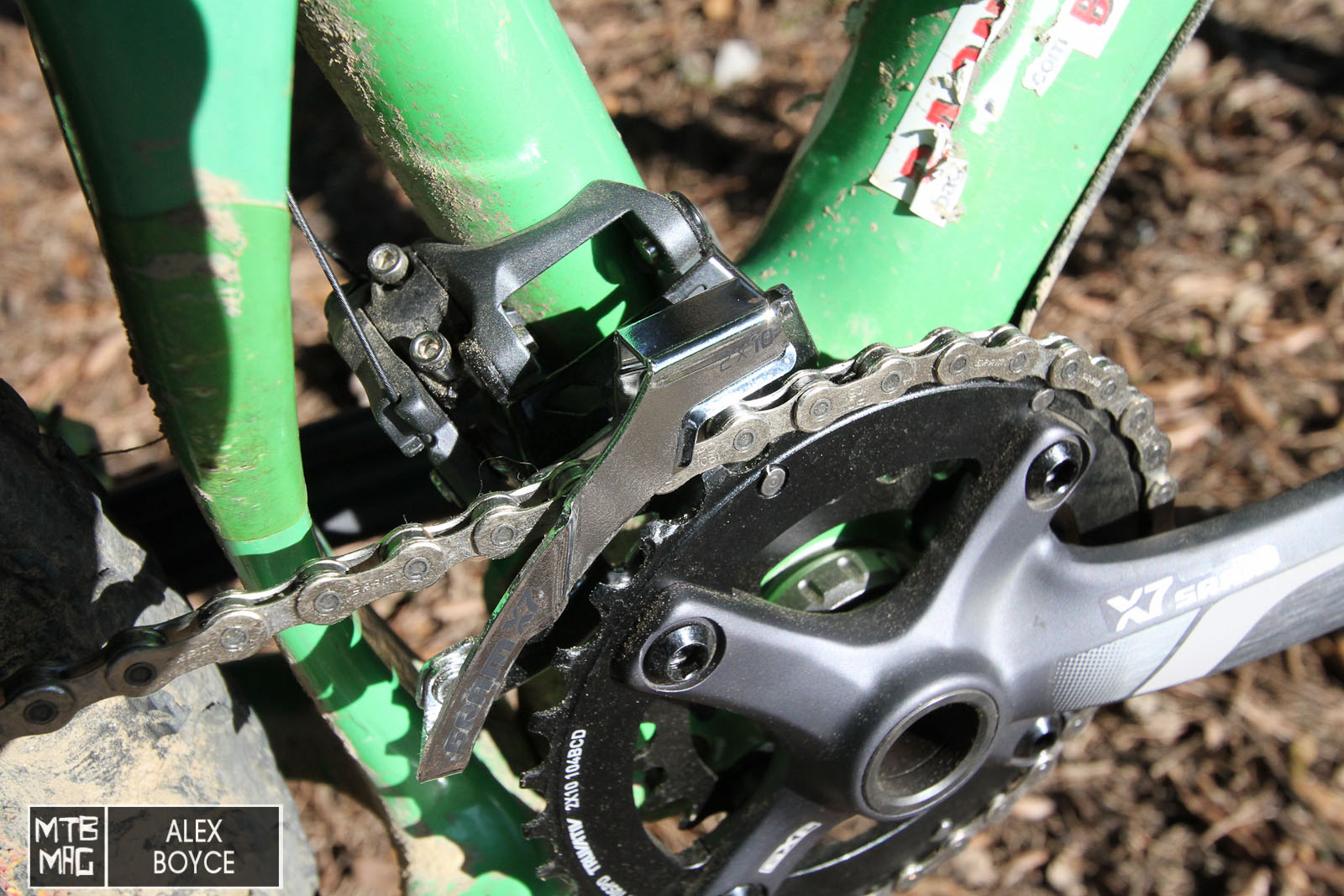 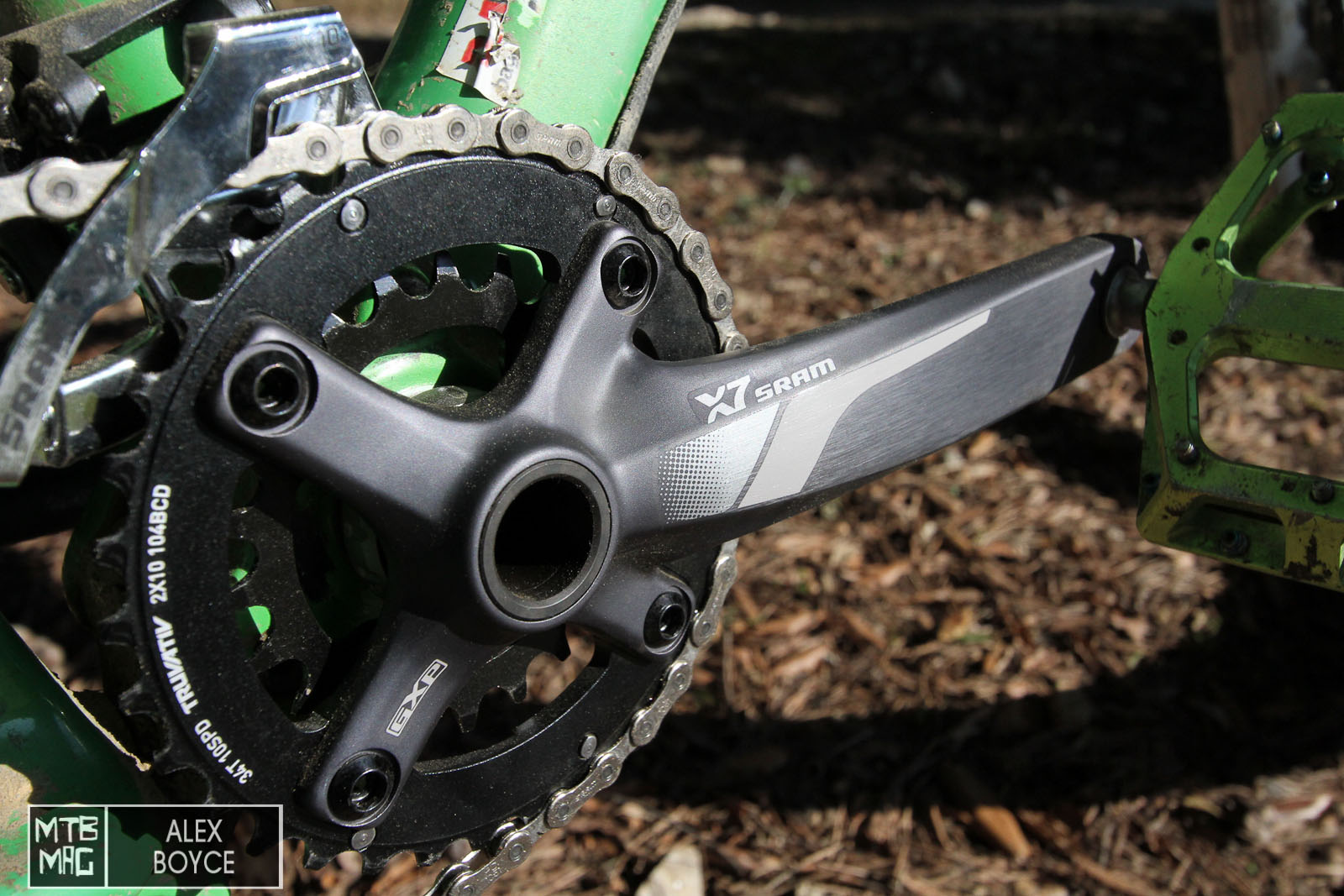 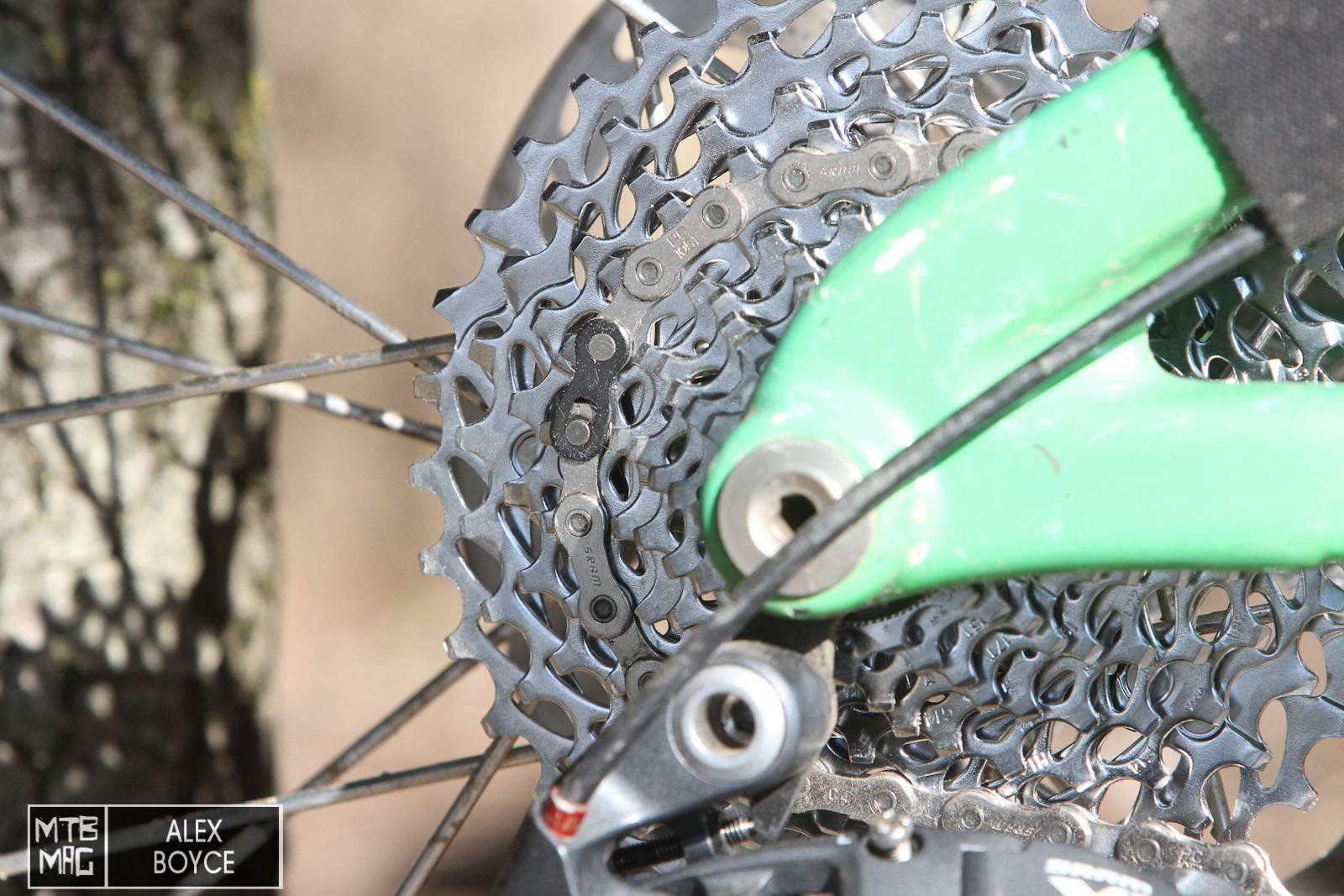 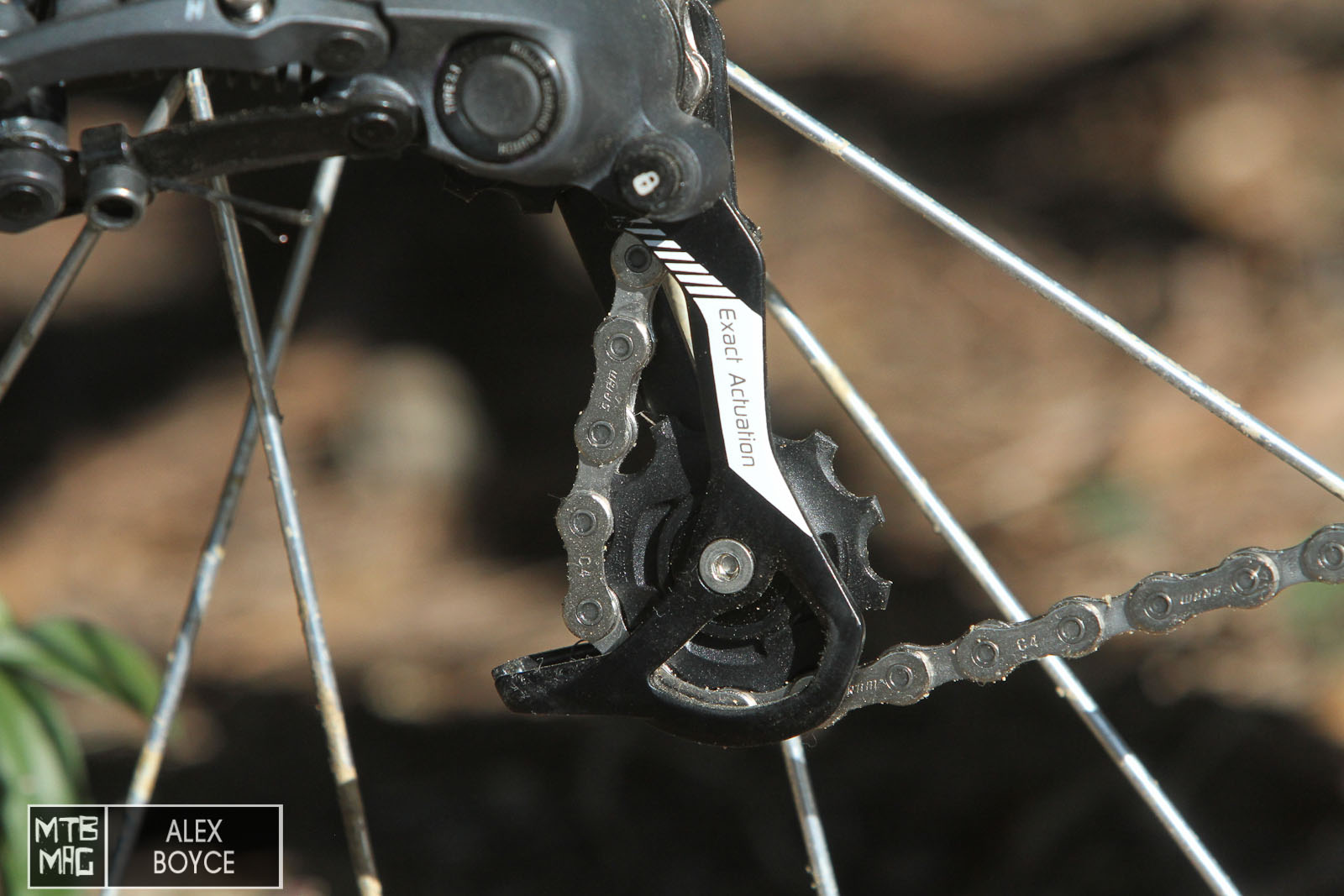 Looking through the numbers the various parts all add up to a weight that is a bit heavier than the current low end X1 1 x 11 system, especially with the extra shifter and front derailleur but the price is much cheaper, almost half the price. This starts to give us a clue to why 2 x 10 is still relevant.
[ad3]
On the Trail

We blasted around Punta Ala for a few months on the X7 system on a bike we built up for trail riding and also with the mind of putting it into the hands of a beginner rider.

The first point of our riding experience that surprised us was the silence of the system. We have been riding the 1 x 10/11 systems for a while now and silence is golden when it comes to single ring systems as the chain doesn’t come into contact with as many parts. The X7 ran smoothly and quietly during our time on it. Shifting was precise and quick on the rear with the front shifting being fairly quick and precise once adjusted correctly with the cage to ring height and stop screws positioned ideally.

Riding trail and Enduro requires a bike that can do it all and once we had installed the 2 x 10 system we did enjoy the ability to pedal uphill very easily with the granny ring and downhill fast with the larger front gear. We have to say the larger front ring which was 34 in our case was our ring of choice when riding downhill, we did not once switch to the smaller gear. When riding uphill we found ourselves only sometimes switching into the smaller gear for spinning, we only really used the top three gears when we were on the smaller front chain ring. Otherwise we found our selves shifting almost automatically into the bigger chain ring on the front. In our minds it was probably to maintain chain tension when we were riding normally.

This brings us to chain loss. Our chains did drop a few times off the big ring onto the smaller ring on particularly rough trails. This occurred mainly when we were not pedalling. The type II rear dérailleur does keep things tight, but the front ring tooth profile being made for shifting does not allow a completely secure ride in our experience. For that we would add a lower guide, which would add weight and complication.  That being said the chain if it did drop, it dropped onto the smaller ring which was easy to then shift back up on to the big ring.

Over time on the bike the shifting remained fairly good with minimal adjustments needed to maintain perfect changes. The rear X7 dérailleur did stay true and in once piece despite being bounced around sometimes whacked and generally being used in hostile places.  Shifting with the X7 system on the rear cassette remained fast and smooth, with a good performance on all the sprockets and no awkward jumps in gears from having a ring removed etc like with some 1×10 after-market set ups.

Having a shifter on the left did leave us with a busier bar than we have been using for the last few years. This was not a problem but we had to do a bit of repositioning for our seat post control, swapping it back to the right. Once we had done that we got on riding and soon forgot about our pre 2 x 10 habits. This now brings us to our next point.

We have taken a step “back”, for many riders it is there first experience when they buy a bike, so we employed the skills of a beginner rider to see how they faired with the X7  2 x 10 system. On the trail the beginner coming from a blank sheet of paper knew there were two sets of gears and frequently used the small front ring when the tough hills appeared. The main point that became clear with two shifters they noticed especially in tough/rough sections of trail is that they sometimes didn’t know where they were so to speak  on the sprockets and needed more time to make a correct gear selection. This when we put them on a 1 x 11 system didn’t occur, they remembered which gear they were in.  Ironically they also complained if they found first gear when they didn’t want to, it was too easy and they struggled to select the correct gear as they felt they had more to think about with two shifters. Putting them on a 1 x 11 and it immediately made it easier for them to think about the gears and which was right for them. Apart from that their experience was normal and the X7 system responded as it needed  to.

We set-up the bike with a GXP bottom bracket and rode as normally we found ourselves putting power down with no issues and the cranks felt stiff and responsive to our pedal inputs. The crank arms remained in fairly good condition for the duration of the test with only some scuffing occurring. With the 175mm crank arms we felt on our large size nomad that they were the limit of length we would accept as we did have some pedal strikes. The cranks though did, when hitting trail objects occasionally, stand up quite well. We did not feel we would be looking at a ruined set of cranks for quite a while. The threads also held up well after screwing pedals in and out.

We admit it has been a while since we have had any extended time on a 2 x 10 system and it was interesting for us making a step backwards. We weren’t really comparing the 2 x 10 to 1 x 11 performance, as that was not the aim of the test but things surfaced that had we not been on 1 x 11 for a while we would not have noticed in the past. Mechanically and shifting performance wise we found the X7 system to be ideal for our trail riding needs. Without a lower chain guide we felt that hard Enduro use was not ideal for us, we sometimes dropped the chain off the big ring when in rough sections.

Pedalling uphill with the X7 though was a dream, easy and not tiring at all, we could ride steeper climbs for longer (we use a 32T – 40T on our 1 x 11) than we thought and maintain our speed going down without worrying about not having a tall enough gear. Which brings us onto the point we mentioned before about not comparing against 1 x 11 systems. It’s pretty hard to test a 2 x 10 system as an experienced rider without thinking about 1 x 11, yes the gear ratios are wider with 2 x 10 and yes the price is exceptionally good and yes it is less worrying when thinking about not ripping off a €200+  dérailleur on a stray rock. But when looking at Enduro riding a complete 2 x 10 system just seems not for us. For the beginner rider who doesn’t know anything different it didn’t matter, they didn’t know it could be easier to ride and find gears if they had a 1 x 11. Individually the X7 components worked flawlessly and gave us a silent smooth good value ride, together as a system though we found despite the easier first gear out of the box, that we preferred a 1 x 10 modified system or a 1 x 11 system for our taste. Which brings us to the crux of our conclusion who is 2 x 10 for?

In our opinion X7 is a well performing, well priced gear/drive system that is ideal for riders who have a lot of hills to climb and who lack fitness or on the bike time, hence the first gear, and at the same time like to ride downhill fairly fast, hence the tall top gear, plus are on a budget. The cranks are good quality, the weight is fairly good  considering the price, and the drive train will take you and your bike anywhere and not break. The shifts will be smooth and the wear characteristics will leave you satisfied if you hit a rock and have to replace a dérailleur as it wont break the bank. X7 is ideal for not too technical trails and fairly steep climbs. It does take time to learn which gear you are in but in the long term you as a rider will get used to it.

The market took a long time to be convert to 2 x 10 from 3 x 10 a few years back, SRAM did a great job with making it acceptable. SRAM then produced a 1 x 11 system that took time to convince people is good as the simplicity worried people. The problem now is convincing someone who took all the steps in the the new direction to go back the other way and choose a 2 x 10 system. Wild rumours point to SRAM probably producing another cheaper 1 x 11 system in the not too distant future that might make the 2 x 10 system a mainstay of the lower end of the market only. X7 will fulfil that perfectly and give flexibility and value to those who ride it.

[Interview] Curtis Keene speaks on racing, his career and more