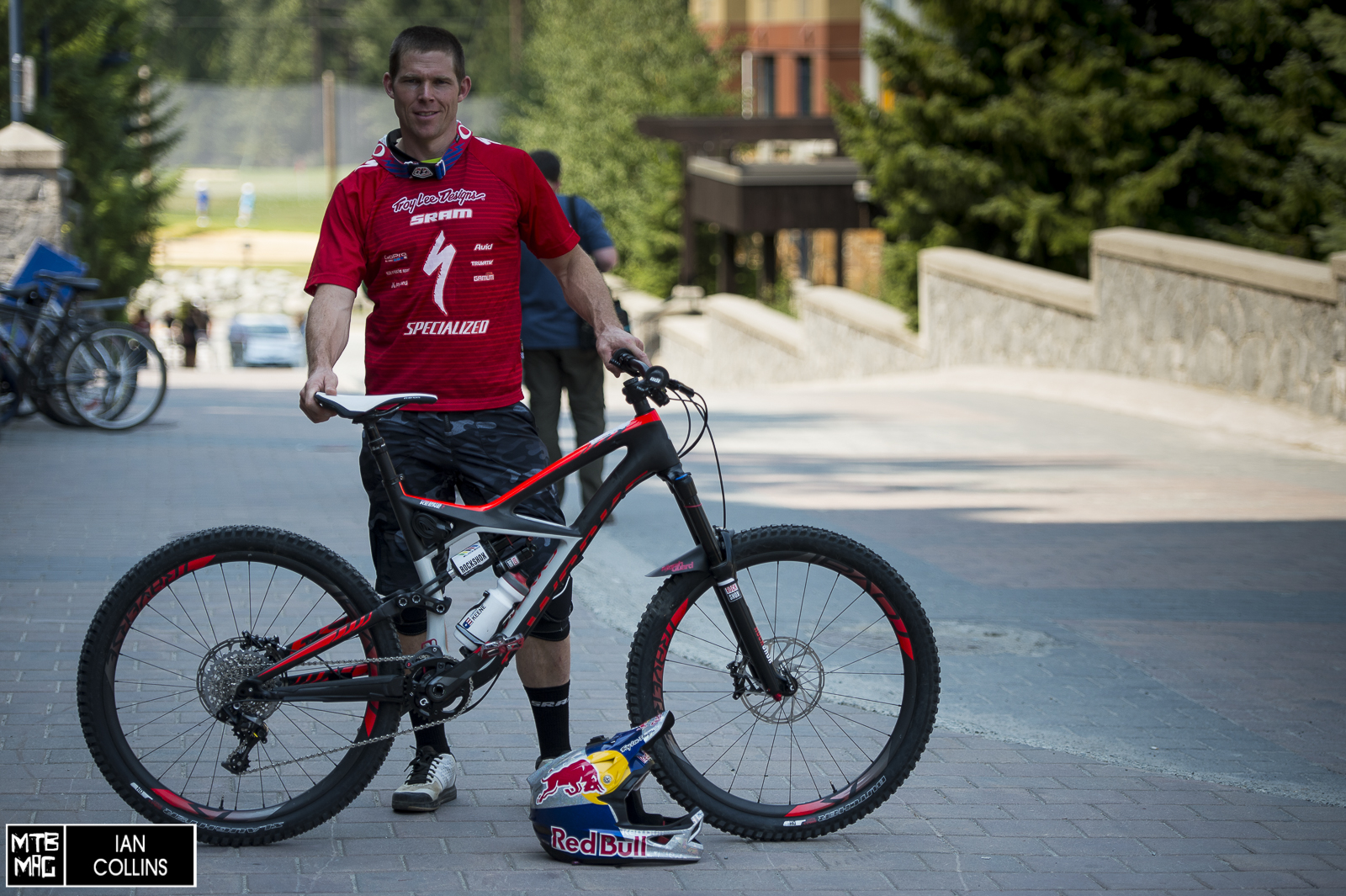 This weekend at the Crankworx Whistler Enduro World Series round, Curtis Keene had his all time best performance when he ended up 3rd overall after 5 grueling stages. This round climbed over 8,000 feet, and went on for ten hours through absolutely savage terrain in miserable heat. Just finishing is a feat for many. Anyhow, when we weren’t busy trying to follow him down some epic trails we chased him down in the village and chatted with him on the race, his career and the new bike he’s been riding.

Curtis – Yes, I’m really happy – prior to this I think it was 6th in France…Other than that I’ve had good stages and 9’s 10’s and 11’s. It’s high level racing and you just can’t make any mistakes. There were times where Jared Graves had won 2 or 3 rounds but had a couple bad ones and ended up 5th or something like that. It’s hard to be consistent – just goes to show you have to be on it.

Curtis – Definitely! I had a really good feeling coming into this race. I like Whistler, I lived in Vancouver for 4 years, my lady is from here so it’s very special to me. Sort of a home court advantage and I’m at ease here. I like the heat. Don’t get me wrong, it was still hard, but I’m ok with it.

MTB – MAG – You’re scratching your way up there these days. Obviously the ultimate goal is to win, but do you have any particular goals for next year? Anything you might do to mix up your training regimen?

Curtis – Ummmm. I want to finish strong in Italy. I had bad luck there last year and flatted. I live in So Cal, and Italy is similar – by the beach, dry riding for the most part, and it’s totally a good time.

Off season, I want to ride my dirt bike more. I didn’t ride it as much this last off season. For one to take a break from MTB so I don’t get burned out, but also to get on that thing and humble myself. I want to ride both tracks and trails.

MTB – MAG – We would imagine that trail riding new terrain on moto would be really good training for Enduro.

Curtis – Absolutely, that’s SUPER GOOD for the way your brain processes terrain. That’s what Jerome Clementz is really talented at. Don’t get me wrong, he’s talented at everything, but one of his good skillsets is that he reads unknown terrain incredibly well. Partially due to racing enduro in a blind format for years.

Curtis – Absolutely, I will give you the honest truth. I like the 29″ hands down. I still have it and ride it. But for me personally and given the style of tracks we’re racing, I feel better on the 27.5″. I just now got the green light to race one officially. It’s just part of the business. Specialized has plans, dealers, blah blah blah. It’s above me and it’s politics. I’m not complaining, it’s just the way it is. 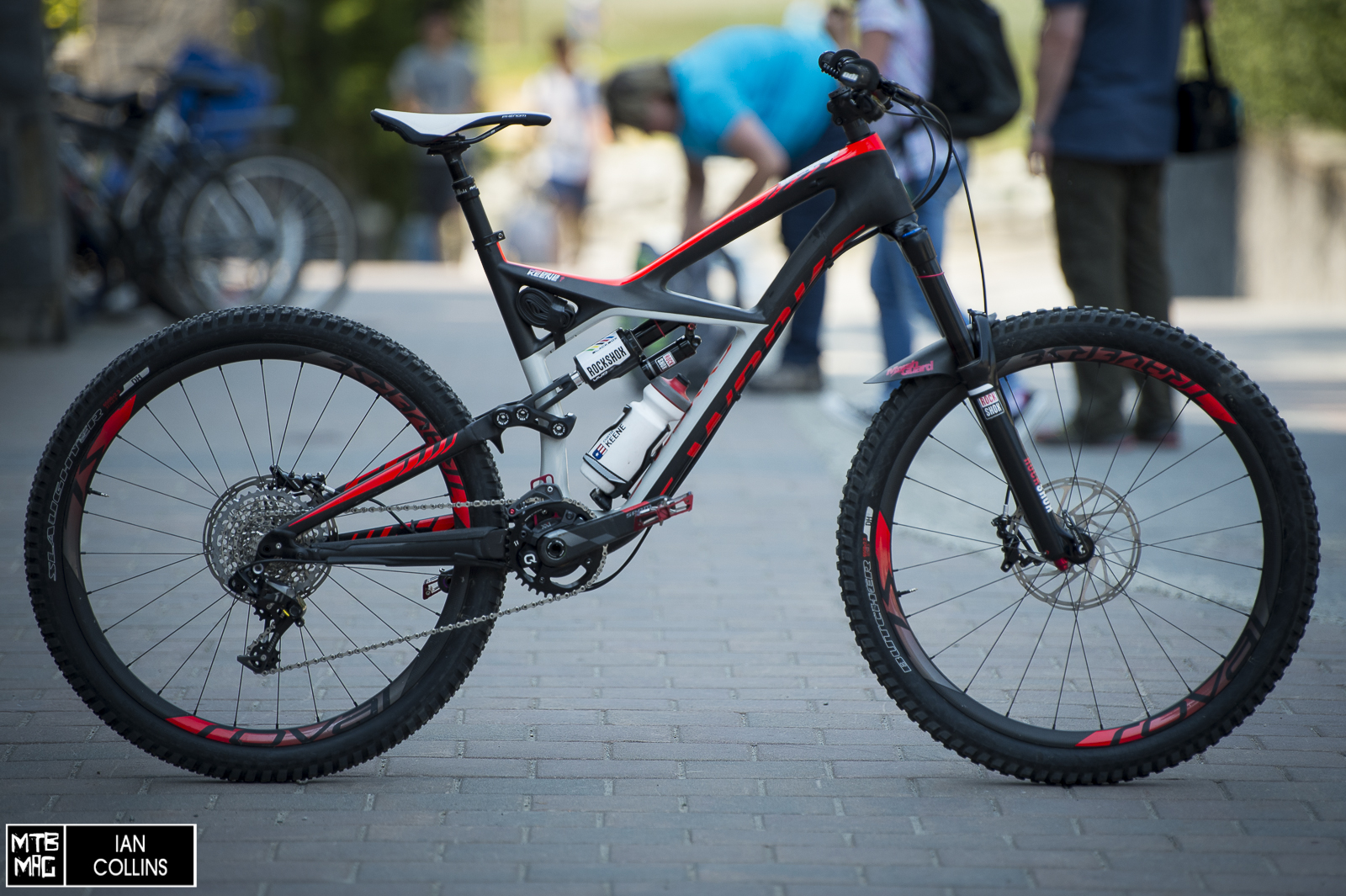 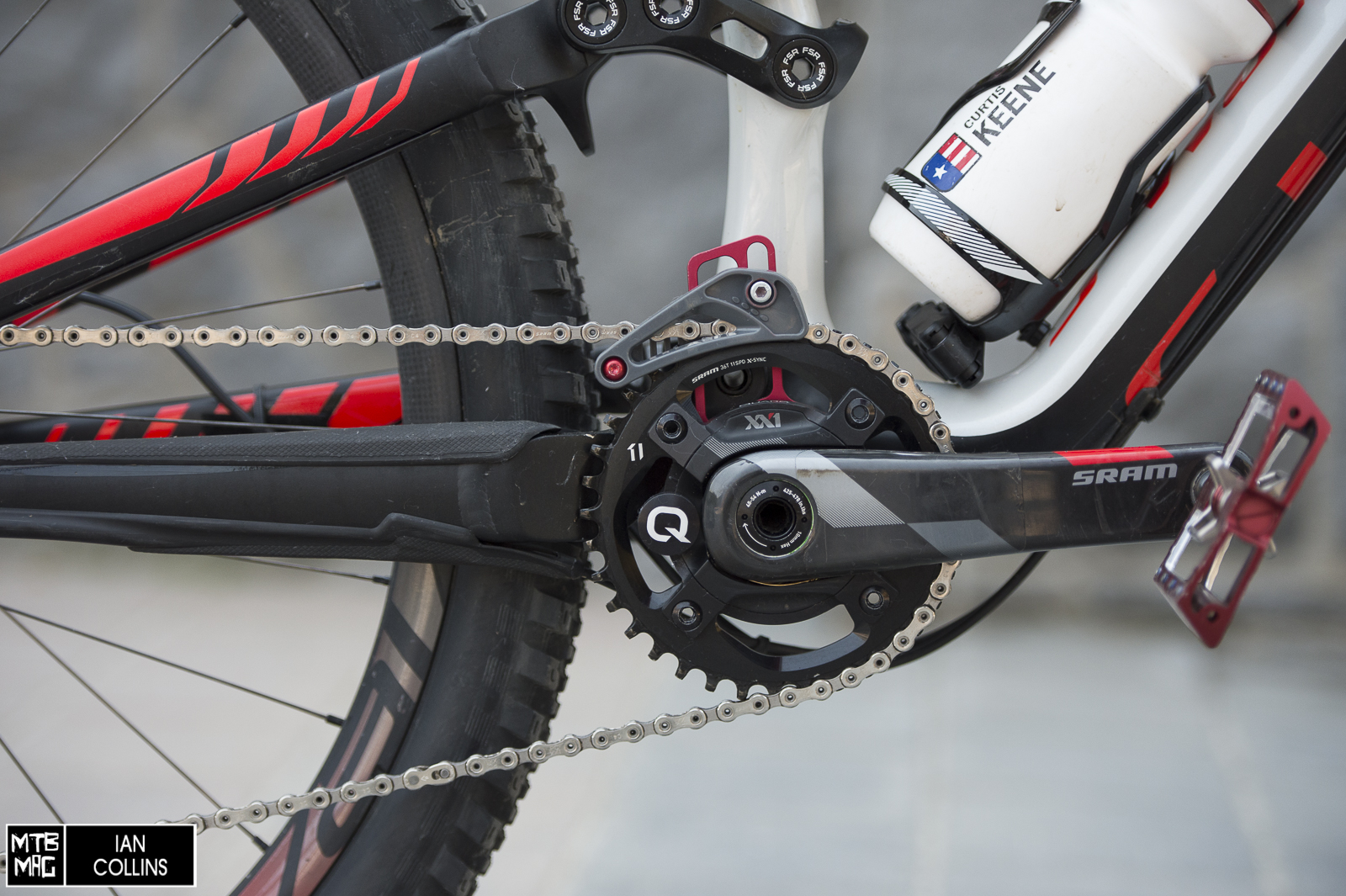 On the tighter stuff it’s just better. If we were racing France where you get up to speed, drop in and just hang on for 15 minutes while you drop 3,500 feet, I would pick the 29″ bike. Once it gets going it monster trucks. These other tracks have a lot of accelerating and then decelerating. I was riding my 27.5″ Spesh Enduro in winter in California, I’ve done testing and I know my times. I like both bikes a lot but there really is a time and place for both.

The level of competition has gotten insane and every advantage counts. Same with downhill, only gnarlier – those guys are risking their lives for seconds. It’s insane. 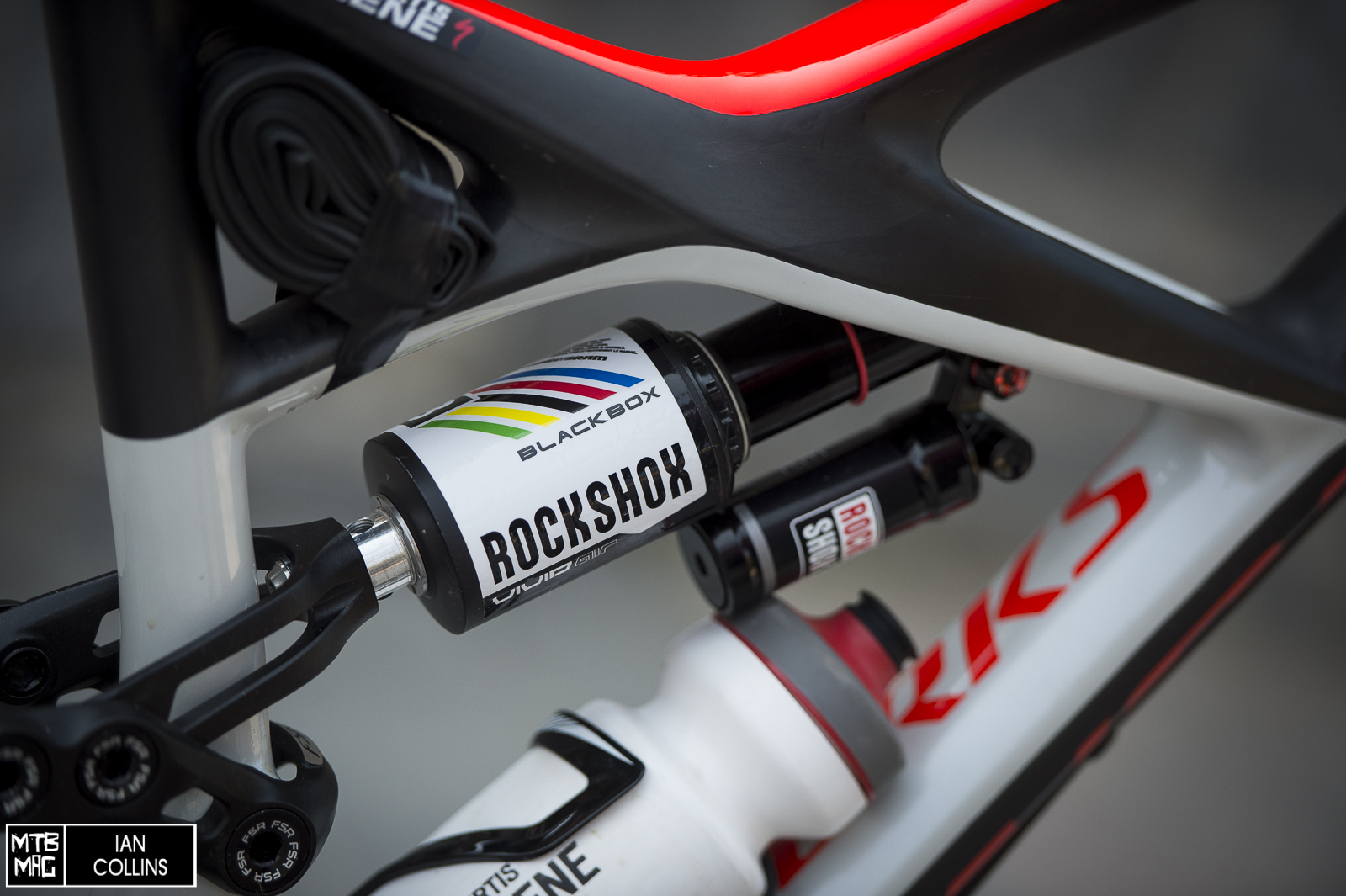 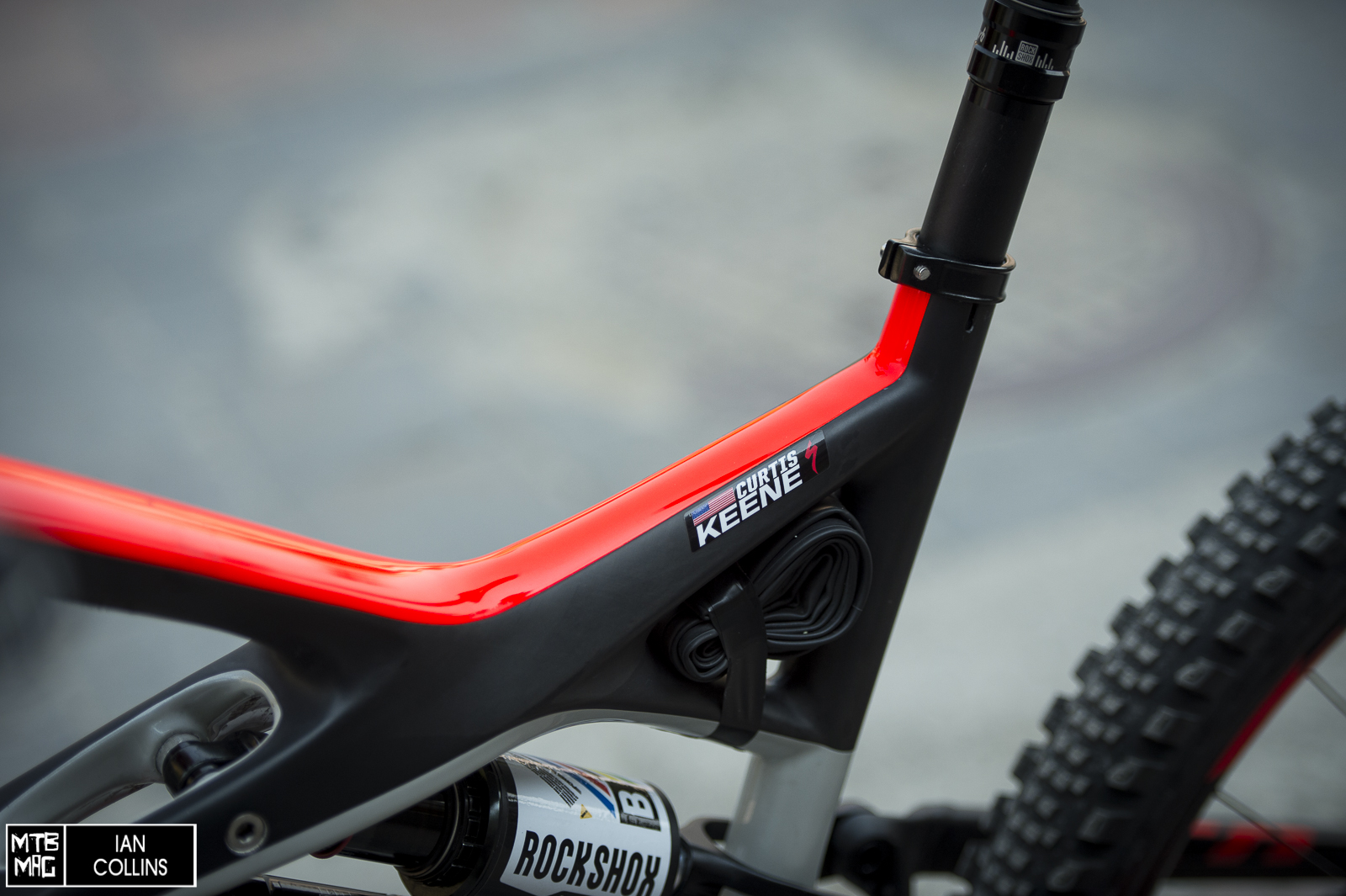 MTB – MAG – Anything else you want to chat about or get off your chest?

Curtis – Hmmmm…The whole wheel size debate. People need to get over it. Shut up and ride your bike. This is what I always say : pick the fricking wheel size that makes you smile at the end of the day and ride it. We’re just riding bikes. Just because a 27.5″ wheel works for me or Jerome doesn’t mean it will work for someone else, and vice-versa. No matter what bike I’m on, or what I do – I will never be Sam Hill. It doesn’t matter. I just don’t have that talent, but that’s cool – I’m fine with it. Just go ride your bikes people!

MTB – MAG – Awesome. Thanks so much for chatting with us Curtis. See you out on the trails today and best of luck in Italy with the last round.