Ghost Bikes proudly references it’s 20 years of German heritage as part of its ethos and design strategy, this message is meant for someone, who? Well the answer becomes clearer as you start to dig beneath the surface of their products and visit their headquarters, talk to their staff and ride their bikes.

Based in Waldsassen in eastern Bavaria not far from the Czech border, is their huge facility that contains all their operations, apart from parts production. Final assembly takes place there and design, with component parts sourced from other parts of the world. With everything so closely under control including their research and development no wonder they have a huge range of bikes, 172 models to be exact.
The company defiantly runs on passion, technology and quality, there is no doubt, the mainstay behind the “German Technology” label. So it seems their products are aimed at serious people yet who like to have fun. With this in mind the RIOT range of bikes was an attempt by Ghost at leaving behind some of the straight thinking and taking a small risk, in this case with the RIOT link suspension design. What they came out with is a system that we found very interesting and had some fun testing.

With already a few design awards under it’s belt the RIOT’s frame design is definitely focused around their RIOT suspension link but with some styling influences from other places. Rumors are that the angular design has been influenced by a few Audi designers who seem to have collaborated in some way with Ghost’s in house design team.

Whether it was on the ascetics only or also technology no one said, but what has come out is a design that works and for their target market, is distinctive and different. The Carbon layup LC (light weight carbon as designated by Ghost), is tuned so that weight is only where it needs to be and the frame has the right amount of flexibility in the right places. The finishing is exceptionally good, and incorporates their Riot Pivot used with the new Inline Double Barrel shock from Cane Creek, which we will look at in more detail below.

The beauty of their frame design is they own their own carbon production facility in China so the quality control is second to none. The angular nature of the frame seems to play well with their color choices and gives a very good overall look, feel and quality to their product. 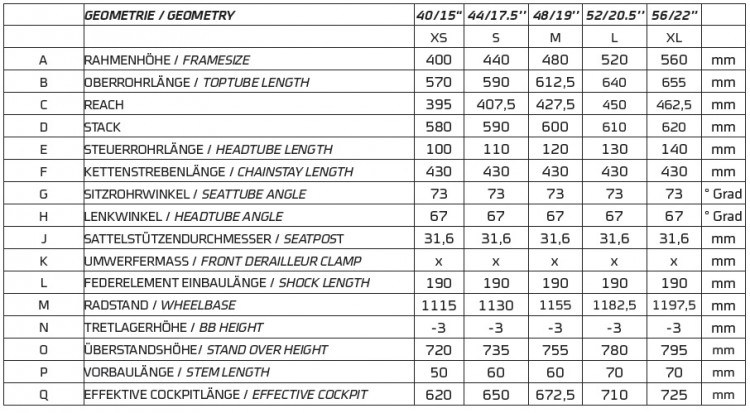 Before we tried the system we looked up the details on their website and it all seemed to make sense, but can a link really be that important? Well after further investigation it seems that the idea of the Riot link is to take the three best parts of a suspension curve from different systems and put them all into on system.

The Riot link in this case is used in conjunction with the new shock from Cane Creek the Inline Double Barrel, we found this shock to be very tuneable but we put most of the settings in the middle for a fairly balanced ride and just tuned the rebound a bit later. The shock and is placed inside the lower part of the bottom bracket area of the frame and is completely surround by the frame design. Access to mounting bolts though is easy, for this type of link the designers have made fairly good choices for how they shaped the frame, balancing strength with mud clearance, looks, functionality and service access.

Looking towards the rear part of the frame the rear brake mount is not an integral part of the rear triangle but as Ghost calls it a “disconnect” brake mount. The idea is to channel braking forces through the axle first rather than the frame, this combined with a four bar link design means braking should be independent of the suspension movement and allows the best distribution of braking forces and rear wheel tracking. The design looks good and follows in the footsteps of a few other manufacturers.

When we first sat on the bike the cockpit and sizing felt good, stem length bar width and seat angle all felt right for the style of riding this bike is aimed at with the top tube length balancing the bike well. The 150mm fork and 67 degree headangle gave a feeling of comfort and enough fork out front for when the trail becomes vertical. The inclusion of a LEV telescopic seat post was brilliant and now we would consider it the minimum setup of kit on any trail bike, as fundamental as suspension.

Setting sag was easy and the inclusion of Shimano SLX brakes with their handy lever reach adjust completed the picture. It felt like what an Enduro/Trail Bike should feel like, aggressive enough without feeling uncomfortable. The finish of the frame is excellent with no protruding cables as all are internally located and an excellent paint job that balances the frames stealthy angularity well.

During testing we spent two days on the RIOT culminating on some trails just inside the border of the Czech Republic, where apparently had we been riding there before communism fell around 25 years ago we would have been shot at. With this idea of freedom in mind we set about pedalling up and down the trails and got a fairly good feel for what the bike could do.

First thing to say is there is no doubt that the RIOT link works. Although we were on a 130mm travel bike, somehow it felt more. This became obvious when we went a bit short on a small double jump, and cased the lip of the landing, we were expecting to be violently ejected over the bars, except we weren’t, the rear suspension just ate up the miscalculation like a much longer travel bike would. We were so surprised that after this episode we started to ride the bike more aggressively as we discovered that to reach the limit of travel with a Riot link, is exceptionally hard.
The extremely good damping characteristics of the Inline Double Barrel from Cane Creek were also clear, it was one of the smoothest shocks we have tried, it seemed to absorb every bump we threw at it without effort. There is no doubt the Riot link and Inline shock are a killer combination.

At speed, in descents, the 150mm 34 Fox fork defiantly adds to stability and an overall feeling of safety as the trails get rocky and steep, we like the increased feeling the long travel option of this bike has, for those everyday trail riders that might want to push the limits at times, this bikes LT setup allows that to happen. The use of a 2 x 10 drive train means climbing in the granny ring is a cinch, but with the higher end gears you have out and out speed, a combination used well by Shimano supported rider Nico Lau on the Enduro World Series circuit. On the Riot this combination gives a wide range of uses of the bike from easy going trail riding to more extreme Enduro descents.

After reaching the bottom of the trails and pedalling back up we discovered how well the suspension tracked over the ground and kept the rear wheel in contact with some very rooty wet climbing trails. The energy we put into the bike defiantly felt like it came back out with positive forward motion, the use of carbon frame in this respect is also paramount to energy transfer, combined with a light 12 kilo weight we found pedalling this bike comfortable all day, with the bike doing what we wanted when we wanted and not wasting our energy.

The move in recent years to better rolling 27.5″ wheels also helps a lot compared to bikes of yesteryear in this category. With Hans Dampf tires and a tight yet fairly strong Race Face wheel set, the contact points felt good and reliable, keeping cornering, drive and braking forces under control well. The use of Shimano brakes is a very agreeable point for us, there is no doubting their stopping power and feeling of reliability no matter what the terrain throws at you, heat dissipation is excellent along with acceptable weight and strength characteristics.

Overall we found the RIOT LT 6 LC a very good all rounder bike. With enough quality kit to keep any potential purchaser happy, a good design and no upgrades necessary. The RIOT has an excellent suspension package, we were very surprised how well it worked, and felt that it would allow any rider to take the bike to the limit if they felt the need to and at the same time allows the same rider to ride around normally.

The fact is that with the RIOT link it is  hard to reach the limit of the travel, is an excellent performance/security feature that we were able to feel immediately when we made mistakes. The fact that it is only 130mm means that it is a great bike to pedal uphill efficiently before you start a descent. All the right boxes have been ticked to produce this bike and it will serve many purposes well from Trail riding to hard Enduro. Price wise it sits above entry level Enduro bikes with it’s lightweight carbon frame, but with the package on offer it has everything an all round rider could want, no compromises and wont leave anyone feeling like they were short changed.

[Video] The Rise of Enduro In Canada

[Interview] Curtis Keene speaks on racing, his career and more