This past Summer I spent some time on a YT Izzo – the latest trail bike offering from the German direct to consumer brand, in the Pro model which is their bread and butter offering. It packs in quite a bit of value for a sub $4k bike. The Izzo is a bike with which YT has engrained somewhat of a racy disposition – at least from the perspective of spec – despite not falling into a category of bikes that would typically be raced on. Regardless, the new bike takes on an entirely different silhouette and industrial design compared to all of the brand’s other offerings. Read on to see how it worked out… 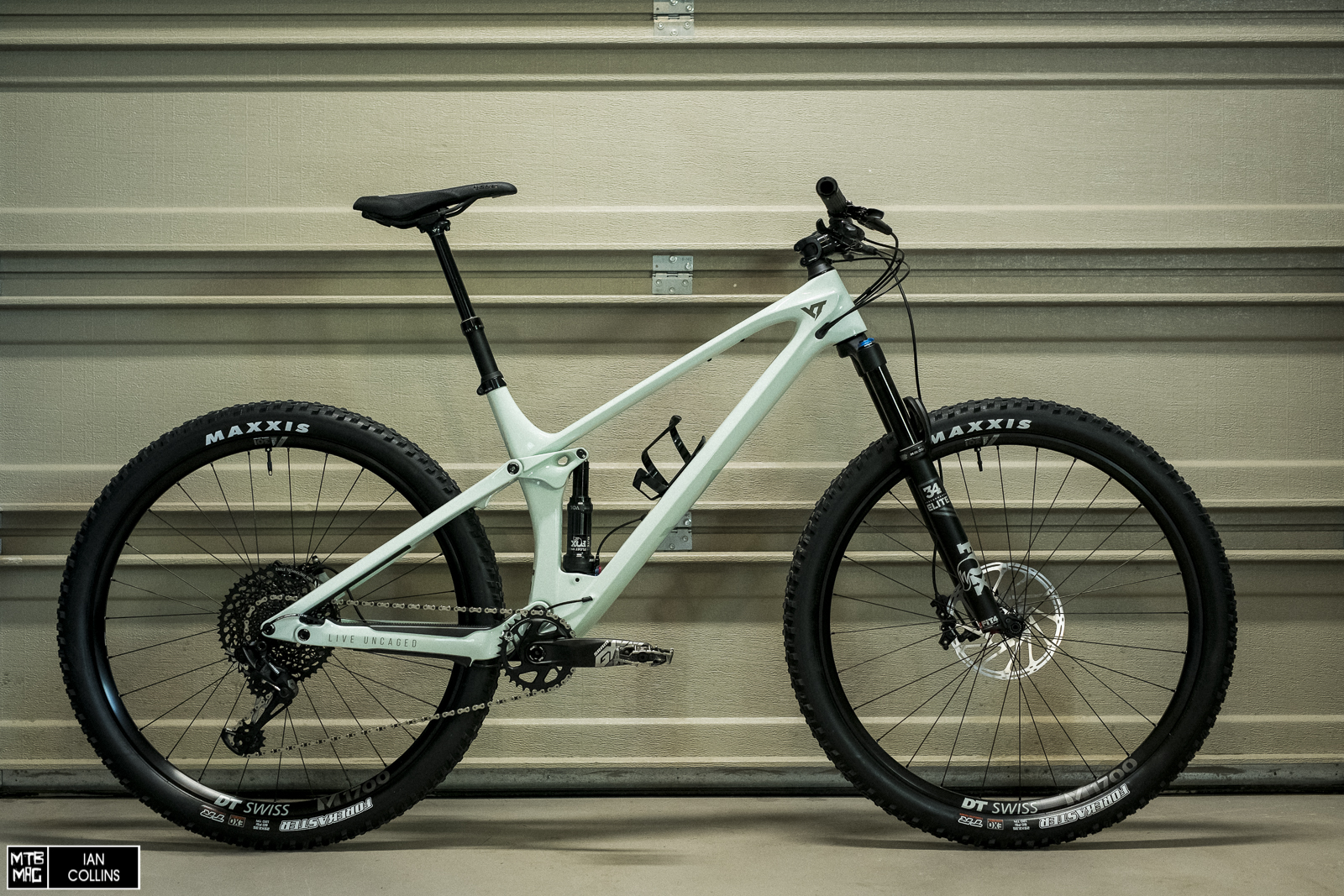 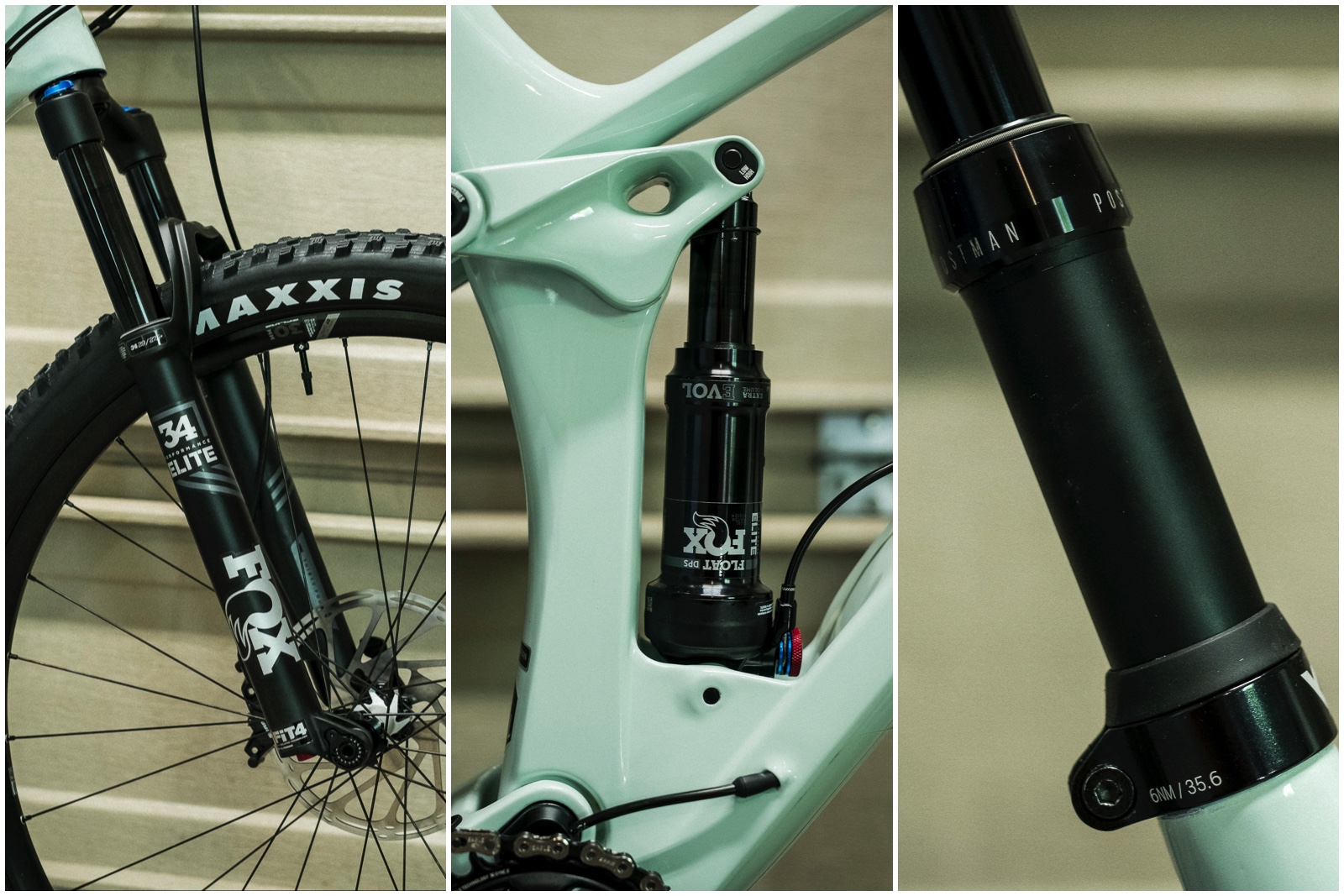 Starting with suspension, YT spec’d a FOX 34 Performance Elite with a Fit 4 damper. This works differently than a Grip 2 by offering a full lockout and low speed compression, plus a single rebound adjuster. At the heart of the bike is a Float DPS Elite with a remote handlebar mounted lockout. Lastly, YT’s in house “Postman” dropper seatpost offers 150mm travel and smooth action in a straightforward package. 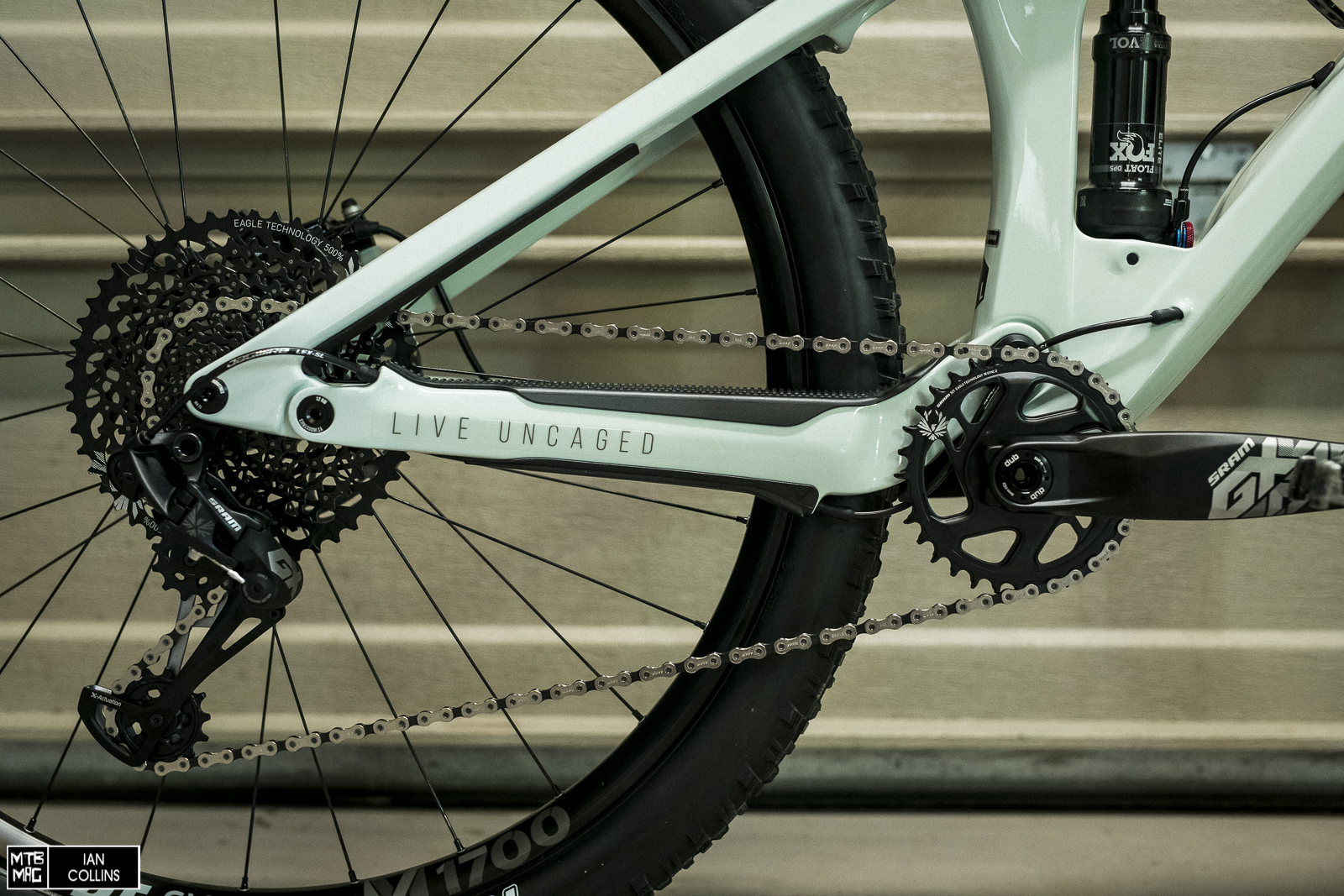 The drivetrain is SRAM’s excellent, well priced and proven GX Eagle 12-speed drivetrain. It features 500% range via a 10-50T cassette and a 32T chainring. The aluminum cranks are based around SRAM’s well DUB bottom bracket/spindle interface for easy maintenance and broad cross model compatibility. All in all, in this case as well as our past time spent on the drivetrain, it offers crisp shifting, great chain retention and wears well. 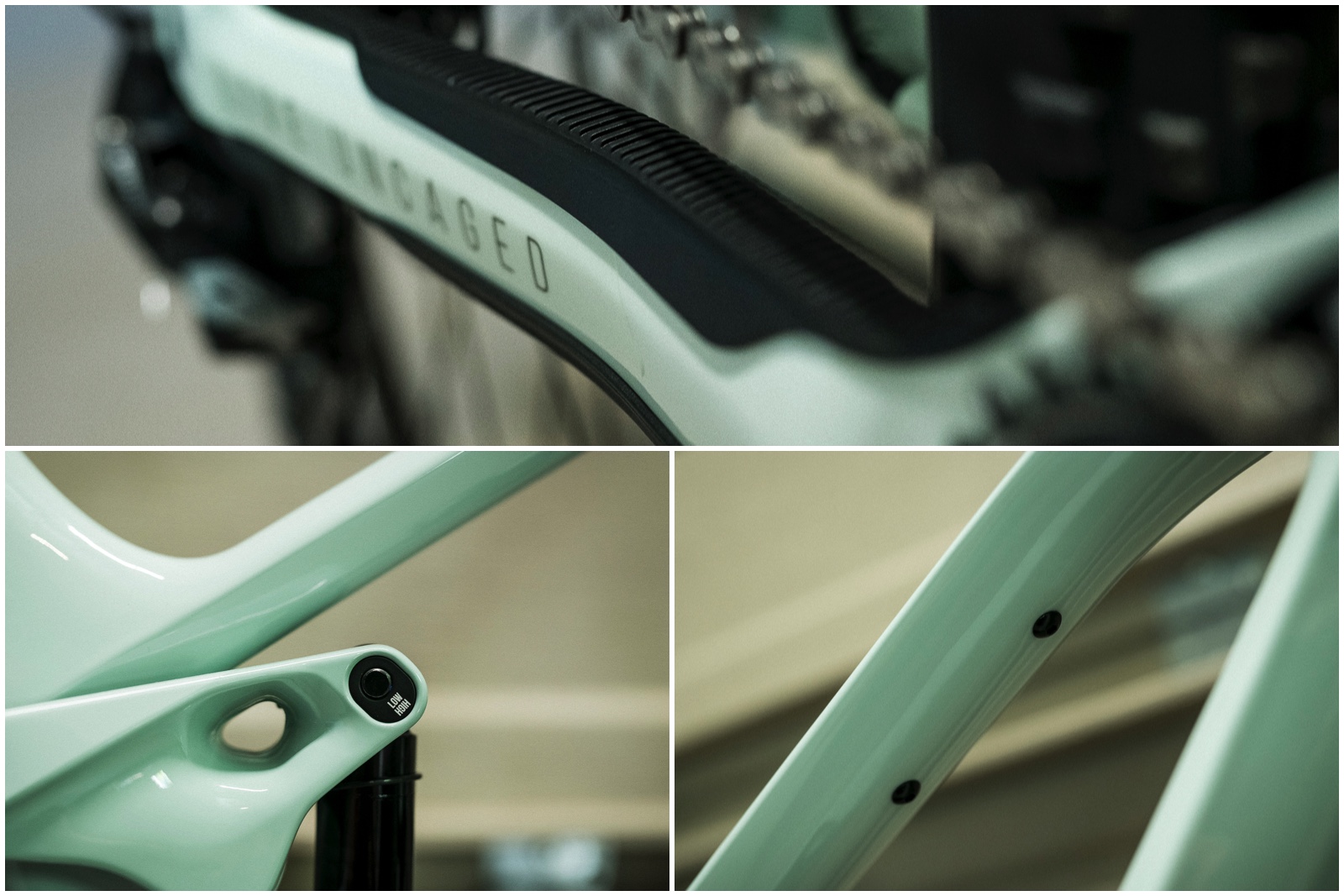 Some frame features – The chainstay features a shaped and molded rubber protector with ridges to silence chain slap, while protecting your investment top and bottom. Underneath the top tube toward the front of the bike is a secondary bottle cage style mount which you can mount spares to via systems such as Wolf Tooth’s B-Rad straps. Lastly, at the upper shock eyelet is a flip chip for adjusting the geometry between high/steep and low/slack bottom bracket heights and head tube angles respectively. 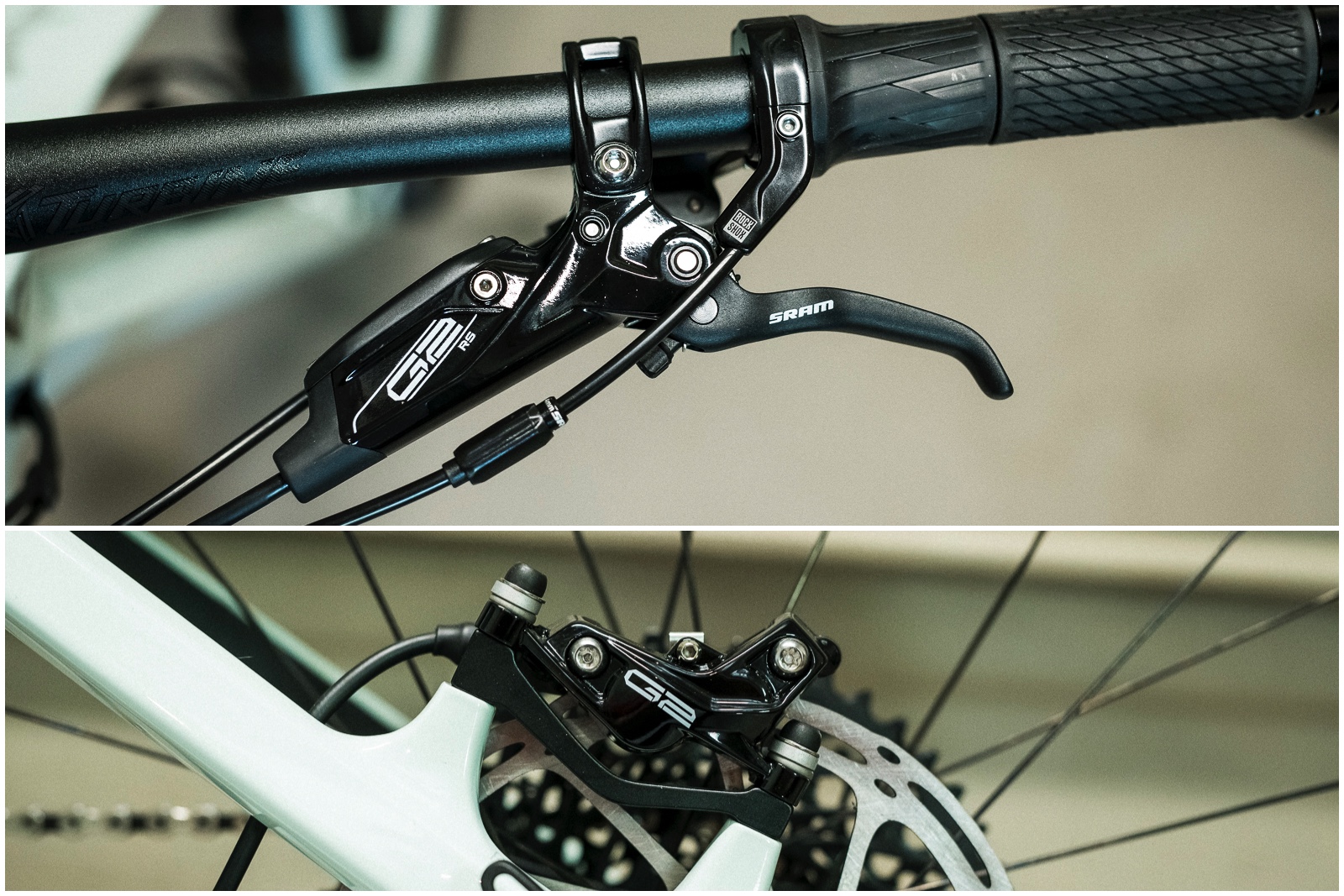 SRAM’s G2 RS brakes are featured front and rear with a 200mm front and 180mm rear Centerline rotor combination – offering plenty of power. We’ve had great luck with brakes from the G2 family and our experience here didn’t stray from that. The RS model features adjustable lever position as well as “Swinglink” for increased power and better lever feel. 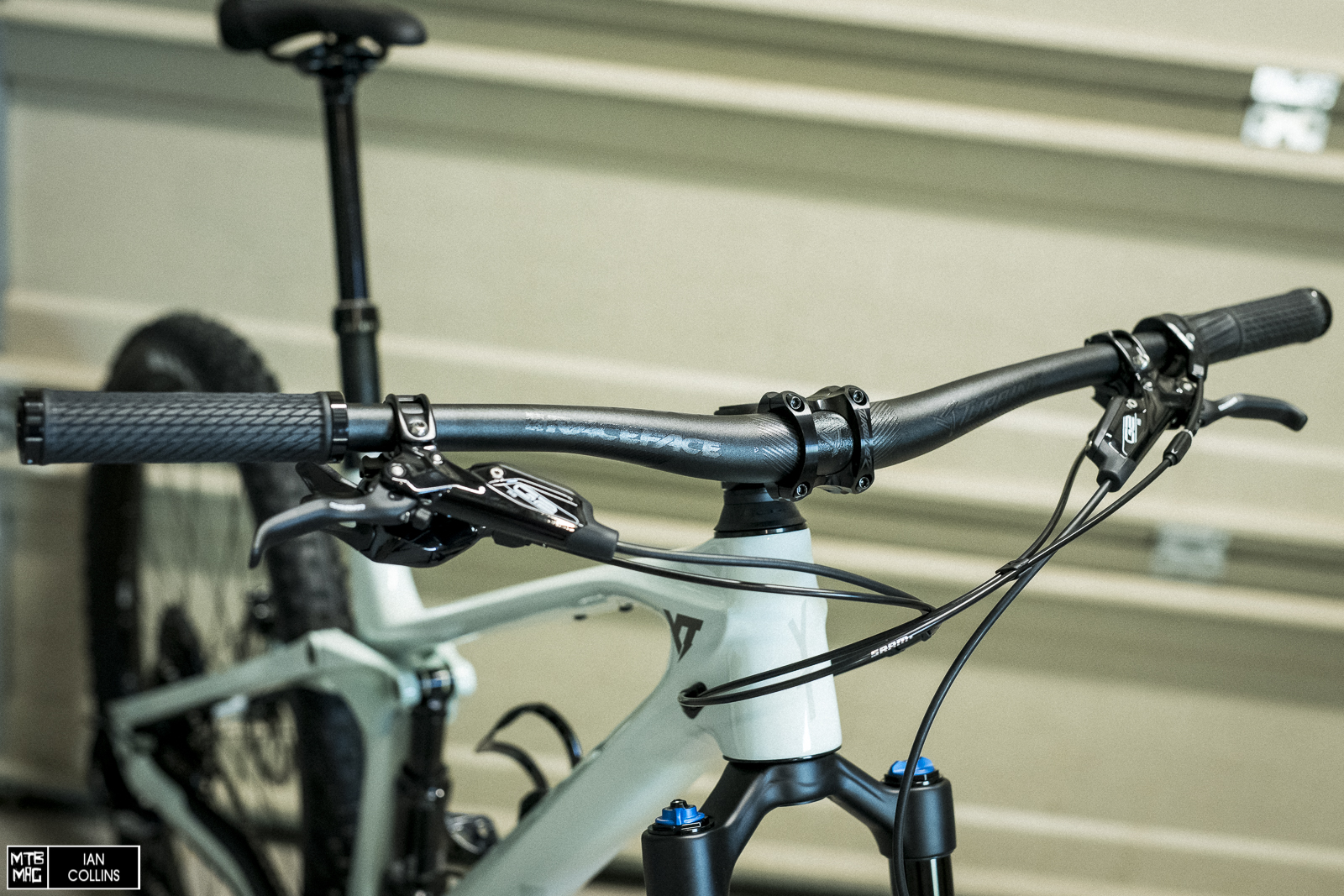 With a remote shock lockout, cockpits can start to get a bit messy, but the Izzo was pretty tidy to be honest. Part of this is due to the fact that the lockout was actuated by a RockShox Twistloc, which is a grip shift style system. While it was functionally adequate, unfortunately if you choose to stick with the lockout you are relegated to the sub par grips. Theoretically, you could get crafty and swap to different grips of your choice and cut the left grip down. Anyhow – the aluminum Race Face Turbine R handlebar/stem combo was of fine quality, but we’d prefer to see a full 800mm length handlebar and a 50mm length stem as opposed the rather short 760mm wide bar and long-ish 60mm stem that was spec’d. It’s not the end of the world, but was an odd choice to me. 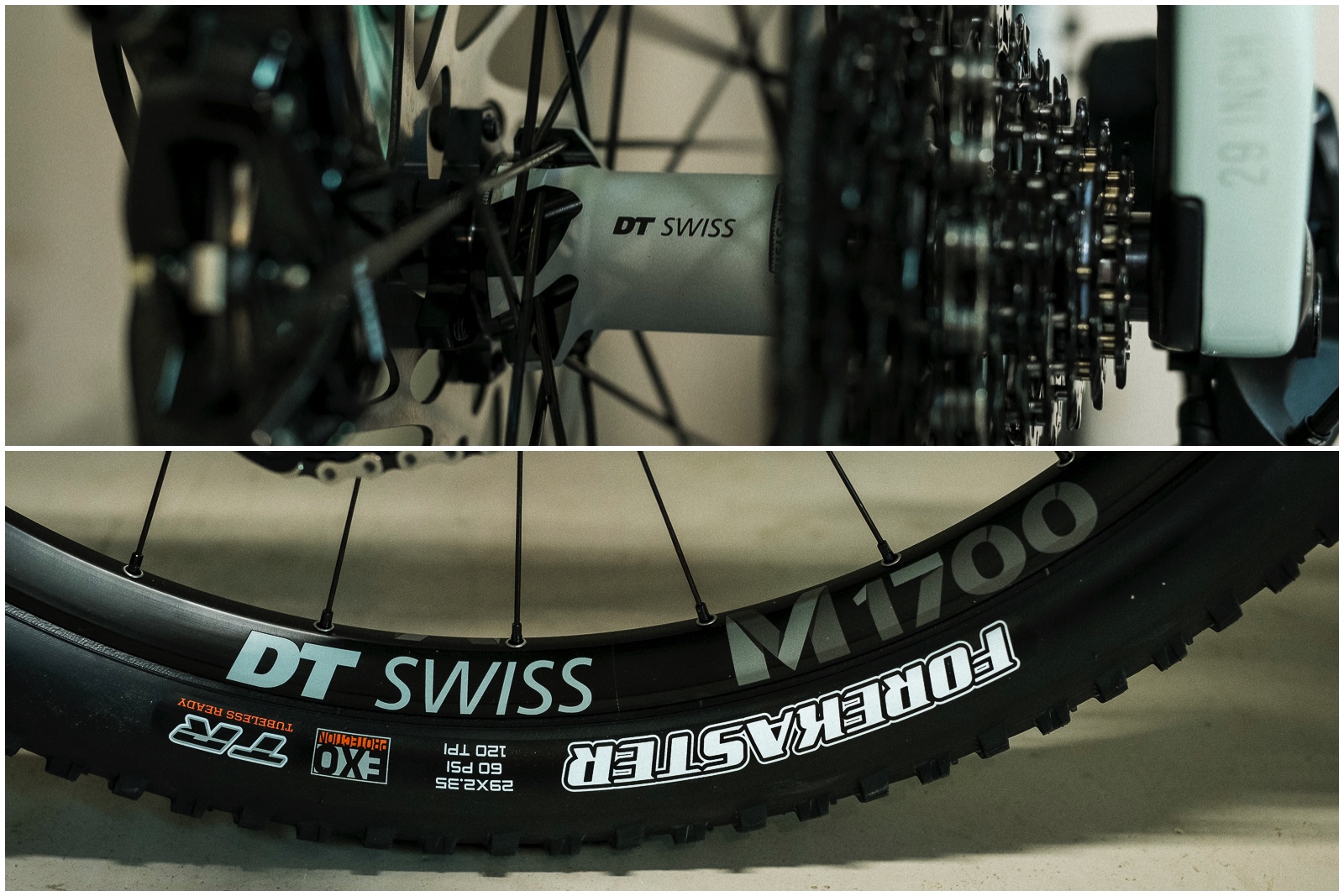 As far as wheels were concerned, I’ve got nothing bad to say about the DT Swiss M1700’s. DT’s complete aluminum wheels generally come in at competitive weights while offering a ride quality that shouldn’t be scoffed at – they generally hold up admirably at both the rim and hub as well. At both front and rear the wheels were wrapped in fast rolling Maxxis Forekasters in a 2.35″ width with EXO casings. While I don’t think the Forekaster is a bad choice for a rear tire on a bike like this, I would have greatly preferred to see a more aggressive tire up front such as a DHRII, a Dissector or the tried and true Minion DHF. While having a Forekaster up front aided the bike’s acceleration, it didn’t do it any favors in anything other than the mildest of terrain. 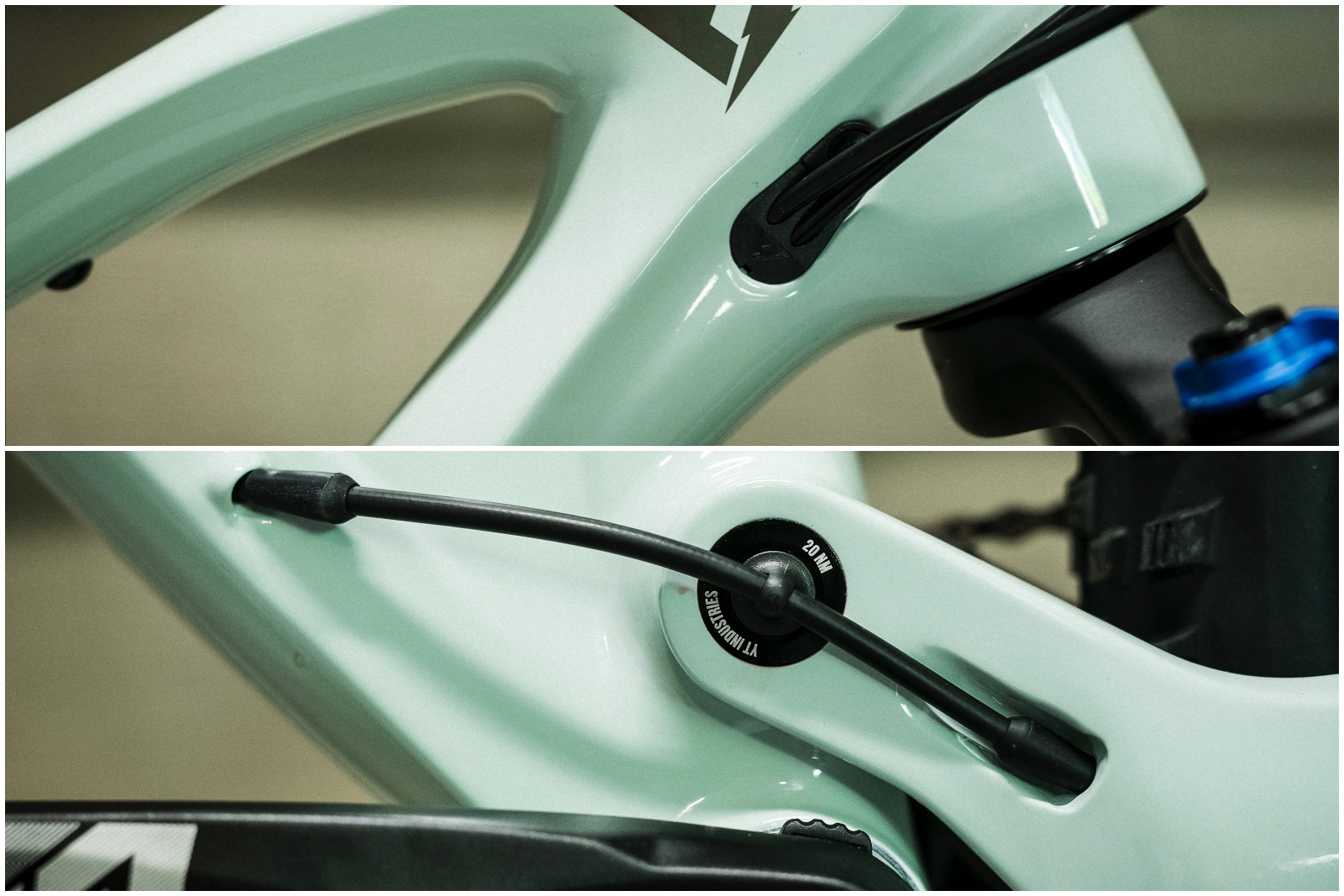 The brake hose and all cables are routed internally via a very clean system that nicely integrates with Izzo’s slick industrial design. The ports feature either removable access plugs or rubber grommets. The grommets had a tendency to wander, but the bike was still quiet as could be. Lastly the little guide shown above in the main pivot was quite nifty.

As far as geometry goes, most of the numbers are pretty on the mark, but YT isn’t doing anything earth shattering with this model. In a word, the bike is “safe”. The 472mm reach on my Large was fine, although I could have stretched out a few more millimeters. I found the 66º head angle to be slightly conservative and thus I didn’t care to come out of the low/slack setting. With all of that said, props to YT for having a steep 77º seat angle, which puts the rider’s body in a nice position, making climbing much less difficult.

If you aren’t familiar with YT and their direct model, it’s worth taking a moment to point out how well packaged and prepared their bikes are. If you are a reasonably competent mechanic, you should be able to unbox and build the bike in about 20 minutes flat. Following a pretty straightforward setup, I began in the high/steep setting. It didn’t take long until I was searching for a bit more calm when things got rowdy, so I hopped into low/slack mode and never looked back. It’s worth emphasizing that the bike climbs incredibly well in both positions, in part due to its steep seat angle. This brings me to a point of contention with the YT’s product managers: Izzo climbs so damn well in the open mode that there isn’t a need for a handlebar mounted lockout. It’s not a race bike, so why clutter the bar and add the weight? After a few rides, I pulled the lockout off and never once regretted it. It’s worth mentioning that the frame won’t clear anything other than an inline shock, but you could always swap to a shock with a normal lockout lever should you choose. 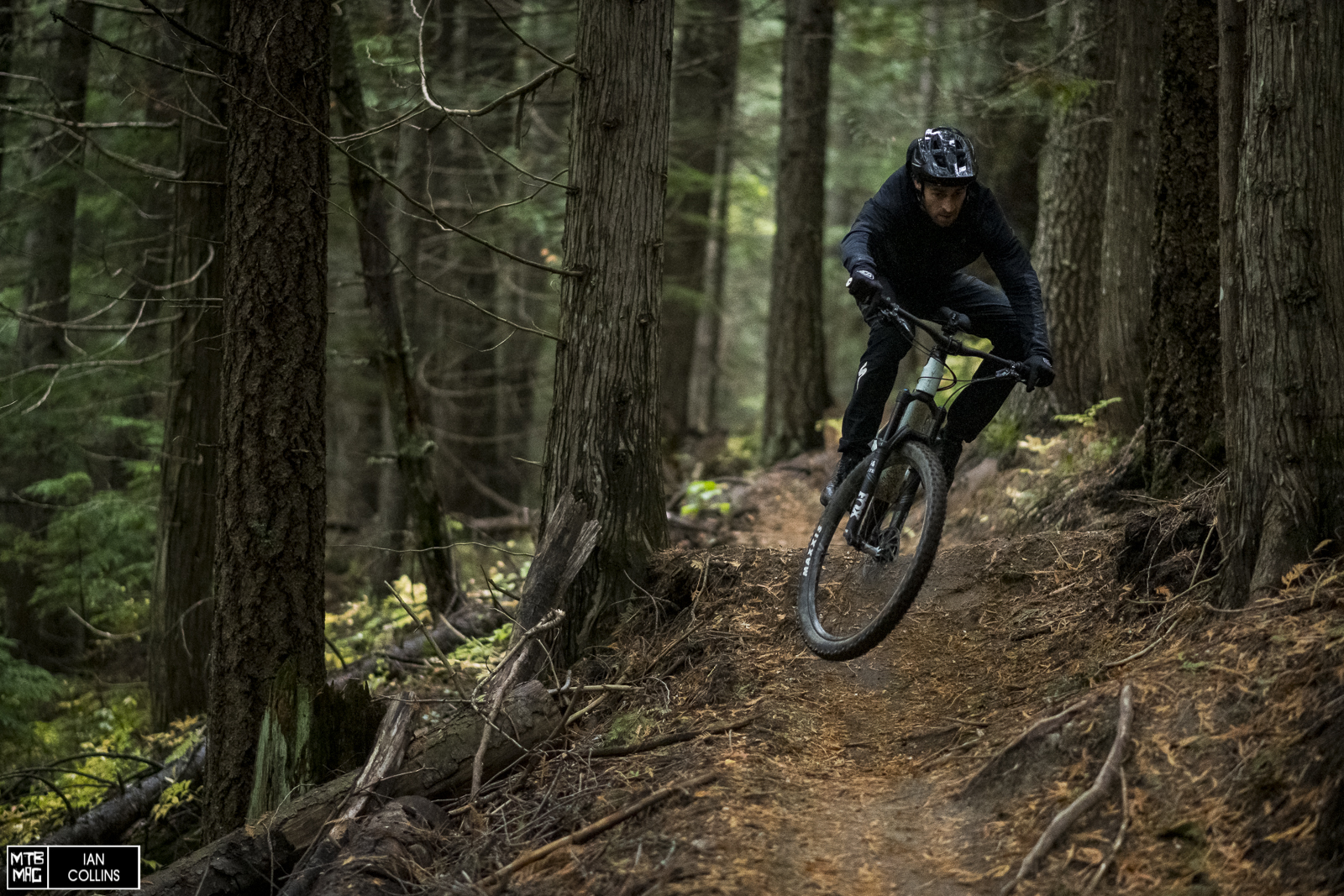 Getting into the meat of it, I found the frame’s layup and kinematics to be spot on as the Izzo made great use out of its modest 130mm of travel. The suspension was light off the top yet I never felt a harsh bottom out – even when I was intentionally looking for it. Overally the bike has a nice rate of progression and a well tuned rear shock. It remained calm and composed in the rough – although as mentioned earlier the light duty tires were holding it back from unlocking its true potential. Up front, per usual the Fox 34 performed flawlessly, offering smooth action and a usable range of key adjustments in a reasonably stiff chassis. In terms of other parts choices, most of them have been touched on under “Details” above, but the bike features a good albeit safe mix of solid components. Props to YT for spec’ing a 200mm front rotor where many may have settled for 180mm. The added stopping power on the steeps was certainly beneficial. SRAM’s Eagle drivetrain and Fox suspension is a winning package and its no wonder why so many bikes feature them in combination despite being from different design houses. It’s also worth taking a moment to appreciate the bike’s lines and how nicely the cable routing flows from front to rear. Overall, the Izzo has a sleek silhouette and is beautifully packaged. 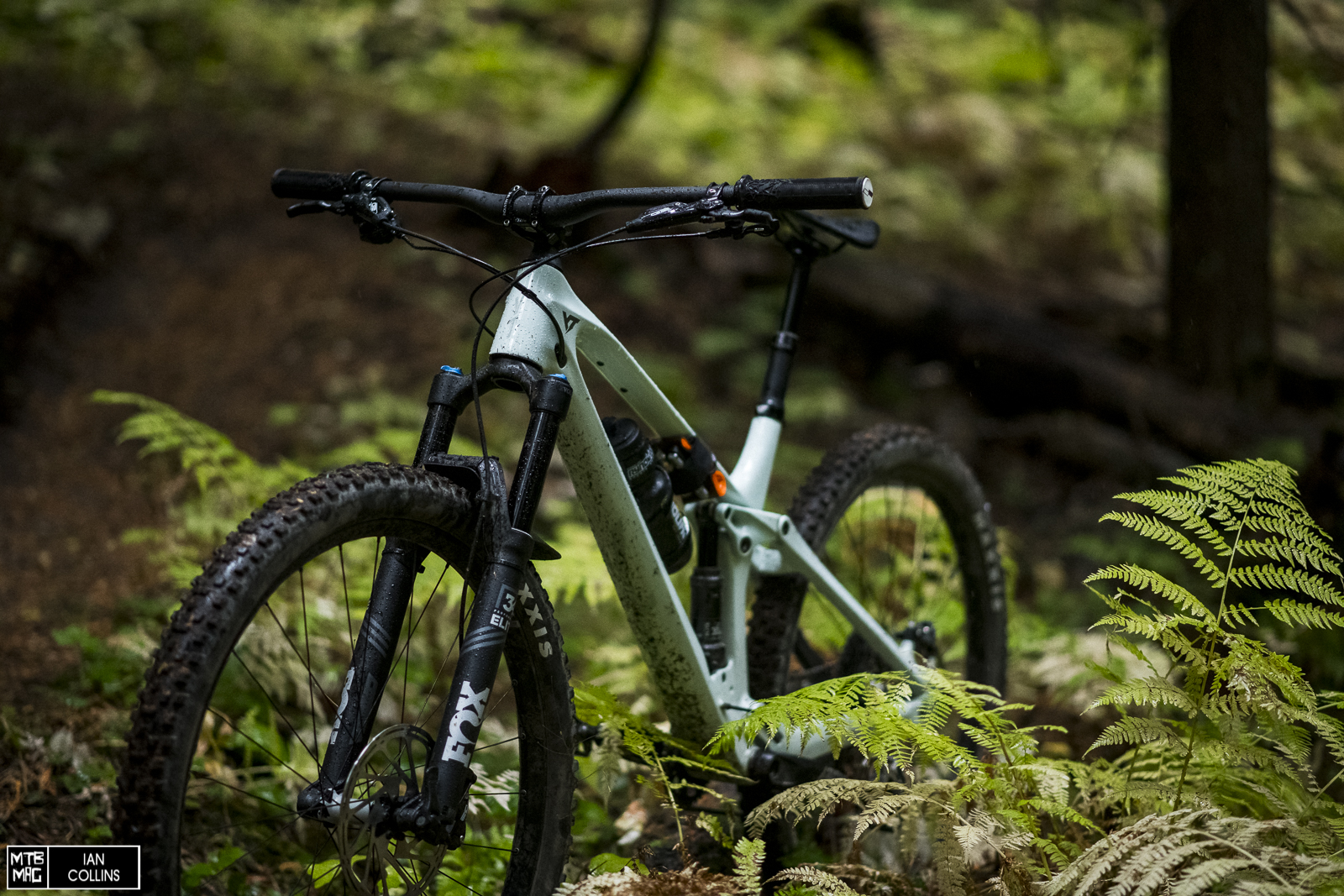 To sum up the bike’s hard wiring I would place the Izzo on the light on its feet and sprightly end of the spectrum. It’s not a long, low and slack bike that begs for more speed in order to come alive. Rather, it feels lively, intuitive and easy to throw around at low speeds, without a demand for too much rider input. With the aforementioned in mind, I did find a touch more calm at pace after slapping my own shorter stem and wider handlebar on. In the grand scheme of things, those two parts and a meatier front tire aren’t exactly a huge list of modifications, but they will give the bike a much more assertive stature on trail. As an overview, the geometry is nicely balanced front to back with numbers that make it an ace in the corners while remaining formidable on the climbs. For me personally, it could be a hair longer and slacker but for many riders it will be exactly what they’re looking for.

With the exception of a few of minor details in terms of spec, and maybe the lockout – which is made redundant by the fact that the bike climbs so well without it – there isn’t much to pick apart. In terms of who it is right for, perhaps the trail rider who is up for big missions that don’t include terrain that’s too horrendous. After all, the bike does err slightly on the conservative side. In summary, it strikes a nice balance of prowess on both the climbs and the descents – which is exactly what a trail bike is supposed to do. In terms of value, you’ll be hard pressed to find a full carbon fiber bike with this nice of a spec for $3,899 once you err away from a consumer direct sales model. Perhaps that’s why a Izzo is so hard to come by…