In April 2016 Young Talent Industries launched their first 29er, the Jeffsy 29, following the successful aggressive trail bike trend, like many other brands are doing now. In February 2017 YT stretched out the Jeffsy range by presenting a 27.5” version of the bike with 6 different builds: the Jeffsy 27. For the first ride test, during the bike launch, we were given the top notch CF Pro Race, with 160mm of travel at both wheels. For the more detailed test instead, we thought it would been interesting to try the CF Pro, which is the second build in terms of value. It has a provocative price relative to the specs and it offers 150mm of front and rear travel, like all of the other available builds apart from the Pro Race.

The YT Jeffsy CF Pro 27 test has been carried out as usual on various alpine singletrack and on the Finale Outdoor Resort trails, thanks to the hospitality of the Hotel Deutsche Familien and the Ride on Noli shuttle service, which enabled us to add some intensive days of testing while taking advantage of their shuttles. 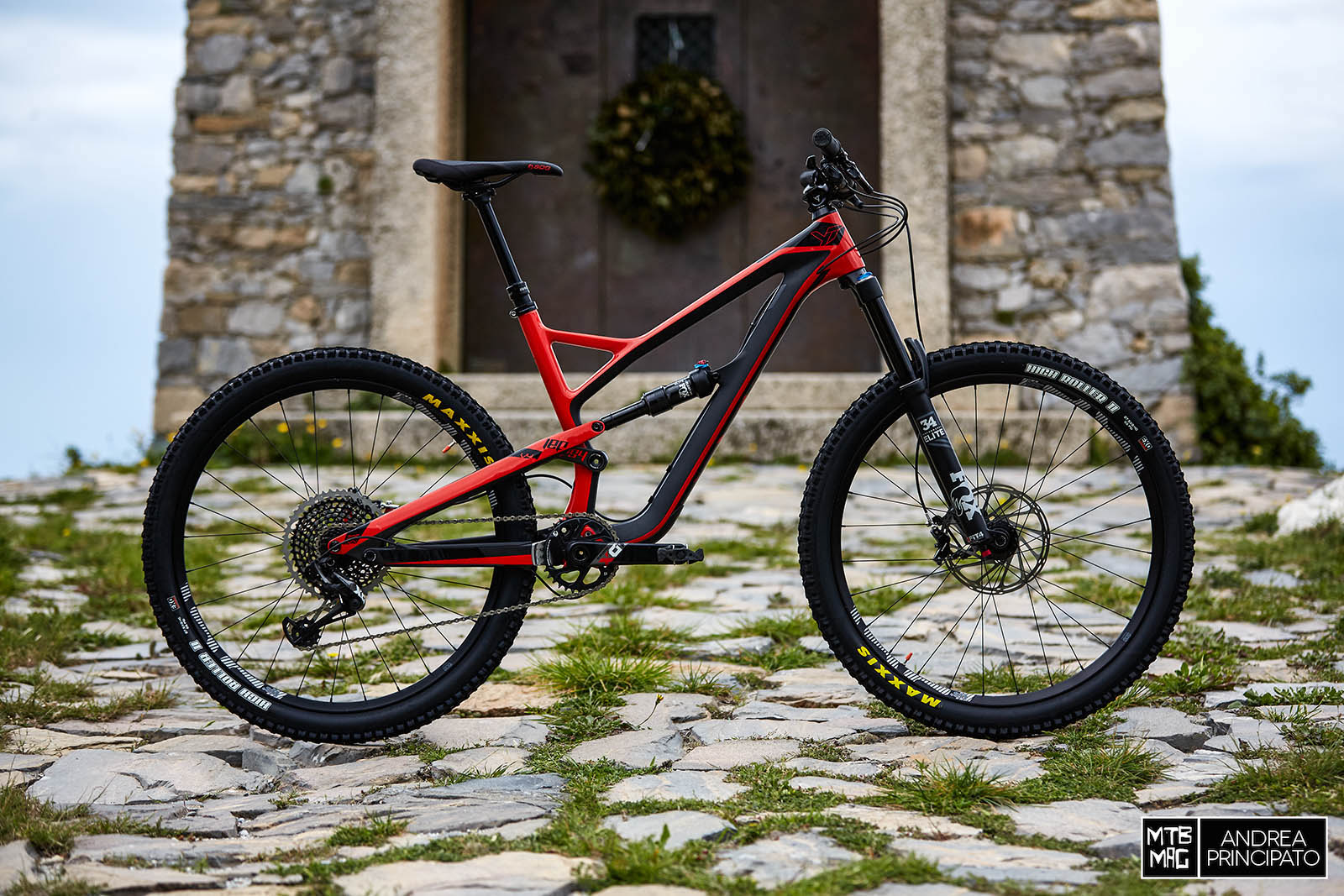 The YT Jeffsy CF frame is crafted with high modulus carbon fiber: front triangle, swingarm and suspension link included. The tubes have different thickness, with additional layers in the most critical areas, to provide solidity and stiffness. The Virtual 4 Link suspension system is based on a four bar kinematic with a Horst link and offers a progressive compression rate with very sensitive initial travel, well supported mid travel and a highly progressive end of travel, with lots of bottom-out resistance. 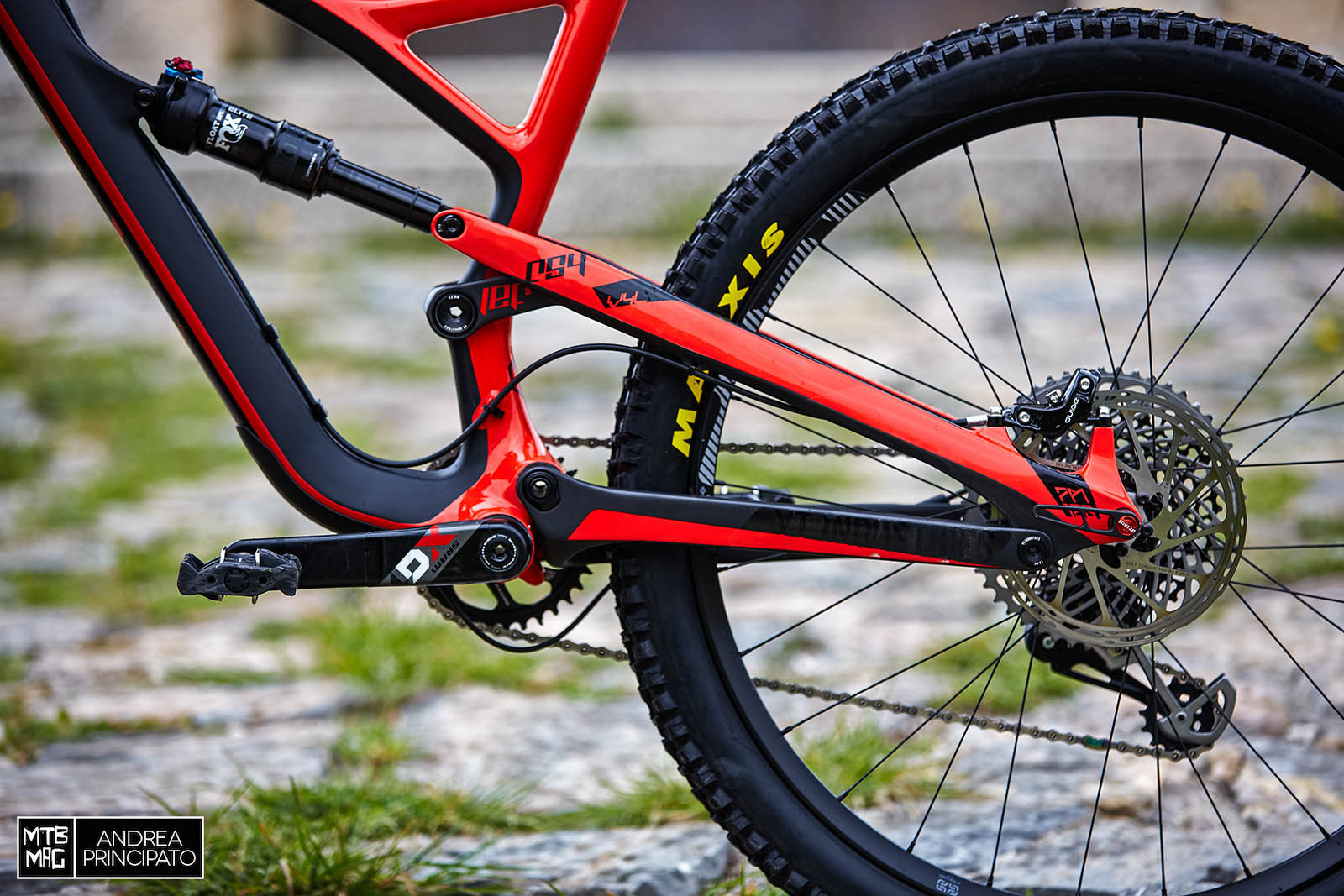 The Performance Elite version of the Fox Float DPS Evol manages the 150mm of rear travel. It has the same characteristics of the Factory version except it lacks the Kashima coat. 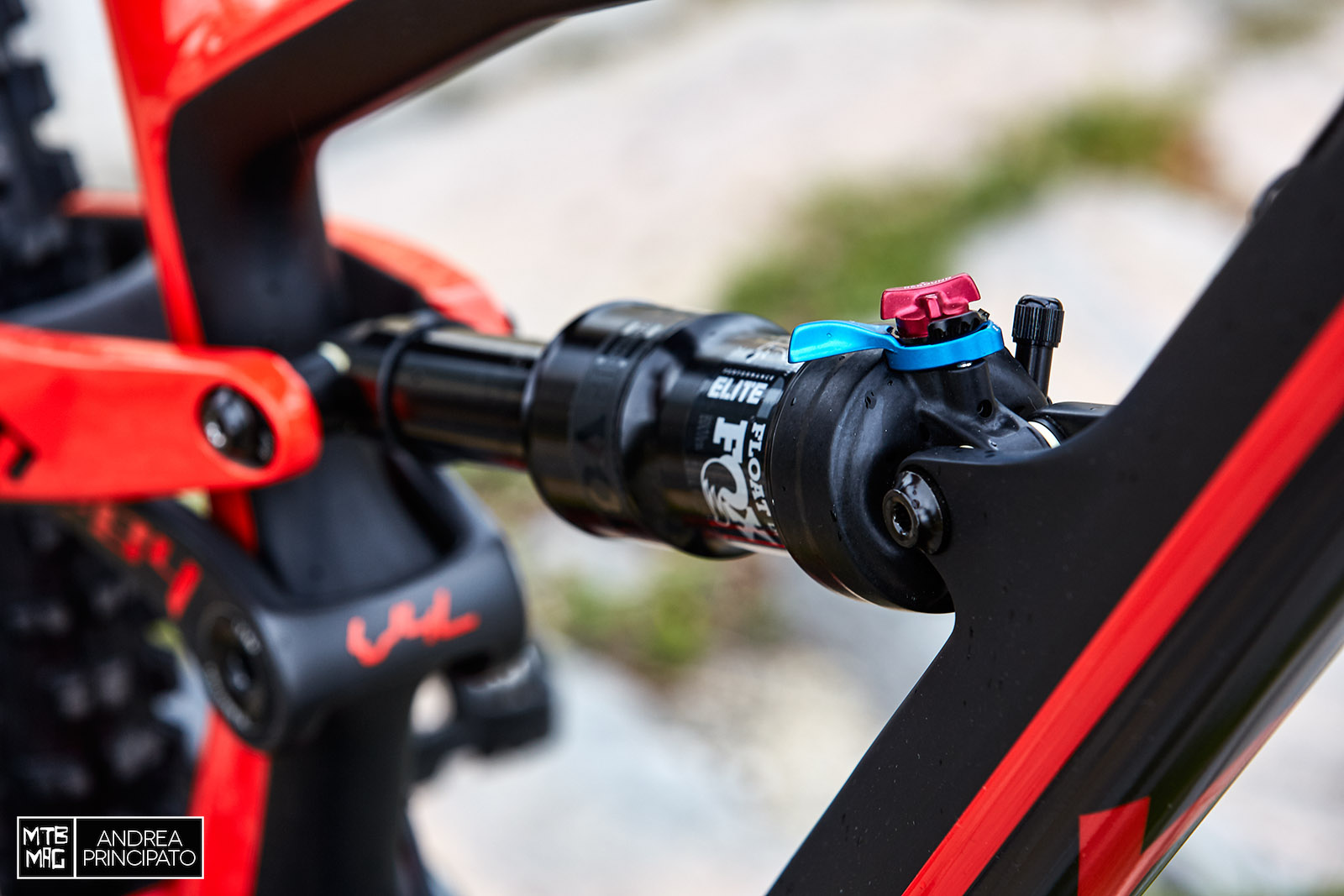 The same goes for the Fox 34 Float FiT4 Performance Elite fork, on which the only difference with the top-level version is the black anodized coating instead of the Kashima one. The hub is a classic 100×15, not Boost. 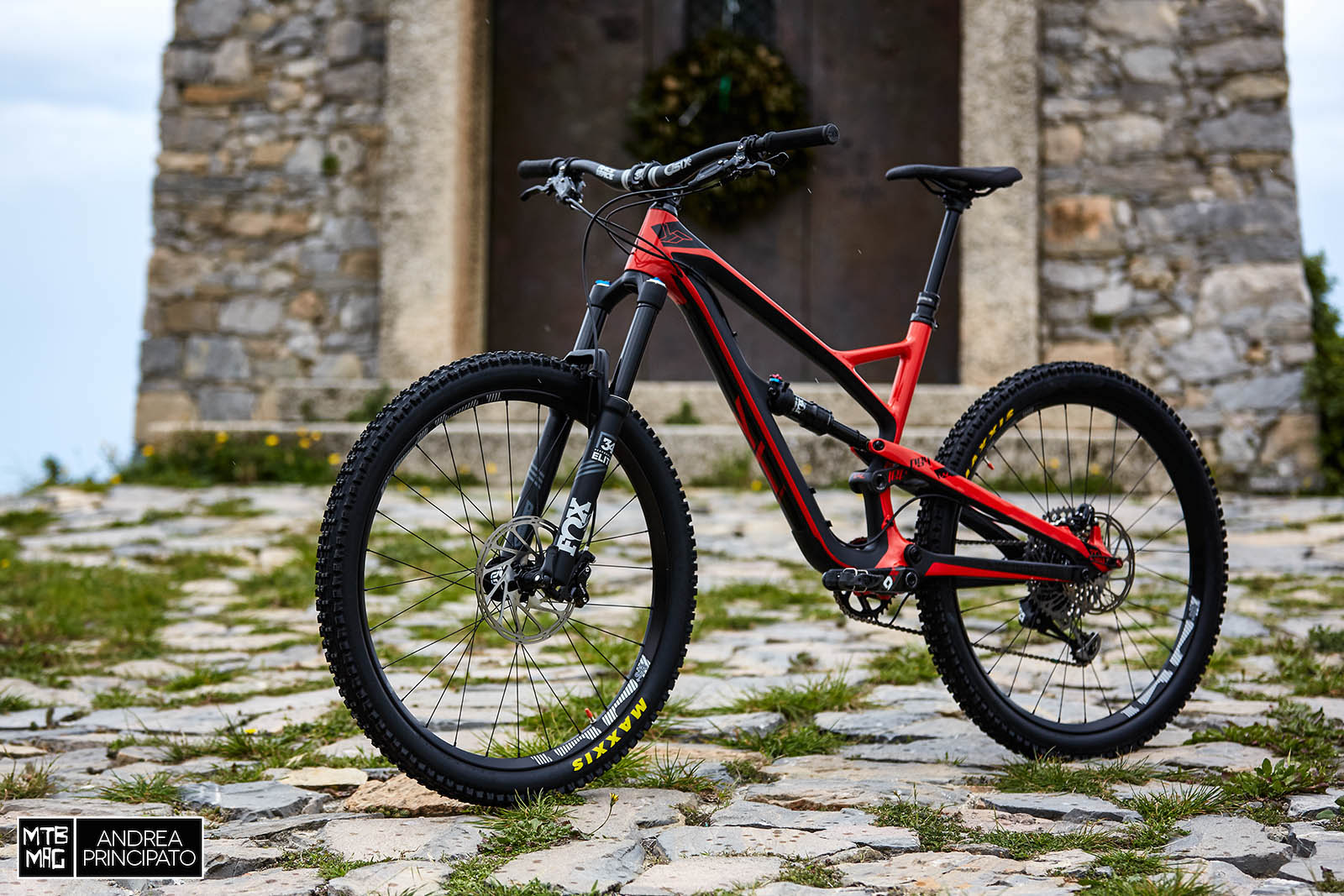 The drivetrain is provided by SRAM: a 12 speed X01 Eagle group with a 10-50 cassette and a 34t Eagle chainring, which offers a balanced range according to the wheel diameter and the target use of the Jeffsy 27, it’s good even for those who are not super fit. For those that would prefer a 2x transmission, YT equipped the Jeffsy with a S3 direct mount front derailleur option. Wheels are E*Thirteen TRS+: aluminum rims with a 28mm internal width, 28 spokes and Tubeless sealant tape. It’s worth noting that YT provides the wheels with tubes. The tires are 2.35” Maxxis High Roller II EXO with Maxxpro 60a compound on both wheels. Since the wheels are a bit heavy for a Trail bike and the tires are Tubeless Ready, it would be a great idea to save some weight by replacing the tubes with UST valves (they were not supplied to us but they must be included in customer package), and adding some liquid sealant. 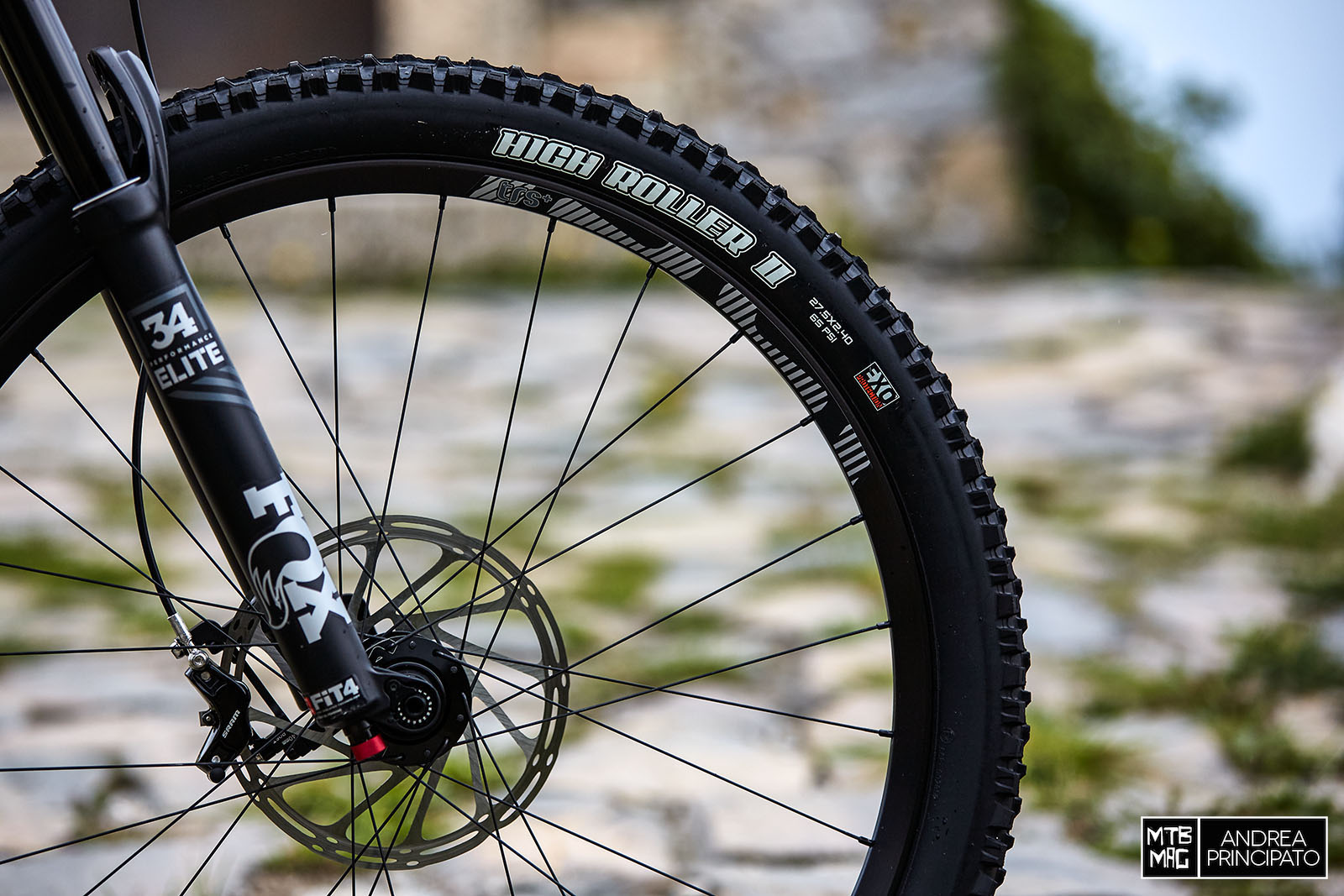 The braking system is the SRAM Guide RSC with Centerline rotors featuring a 200mm disc on the front wheel and a 180mm disc on the rear wheel. The rear brake caliper mount is a Post Mount 180, so the caliper is installed directly onto the frame with no adaptors and, for that reason, 160mm rotors are not supported. 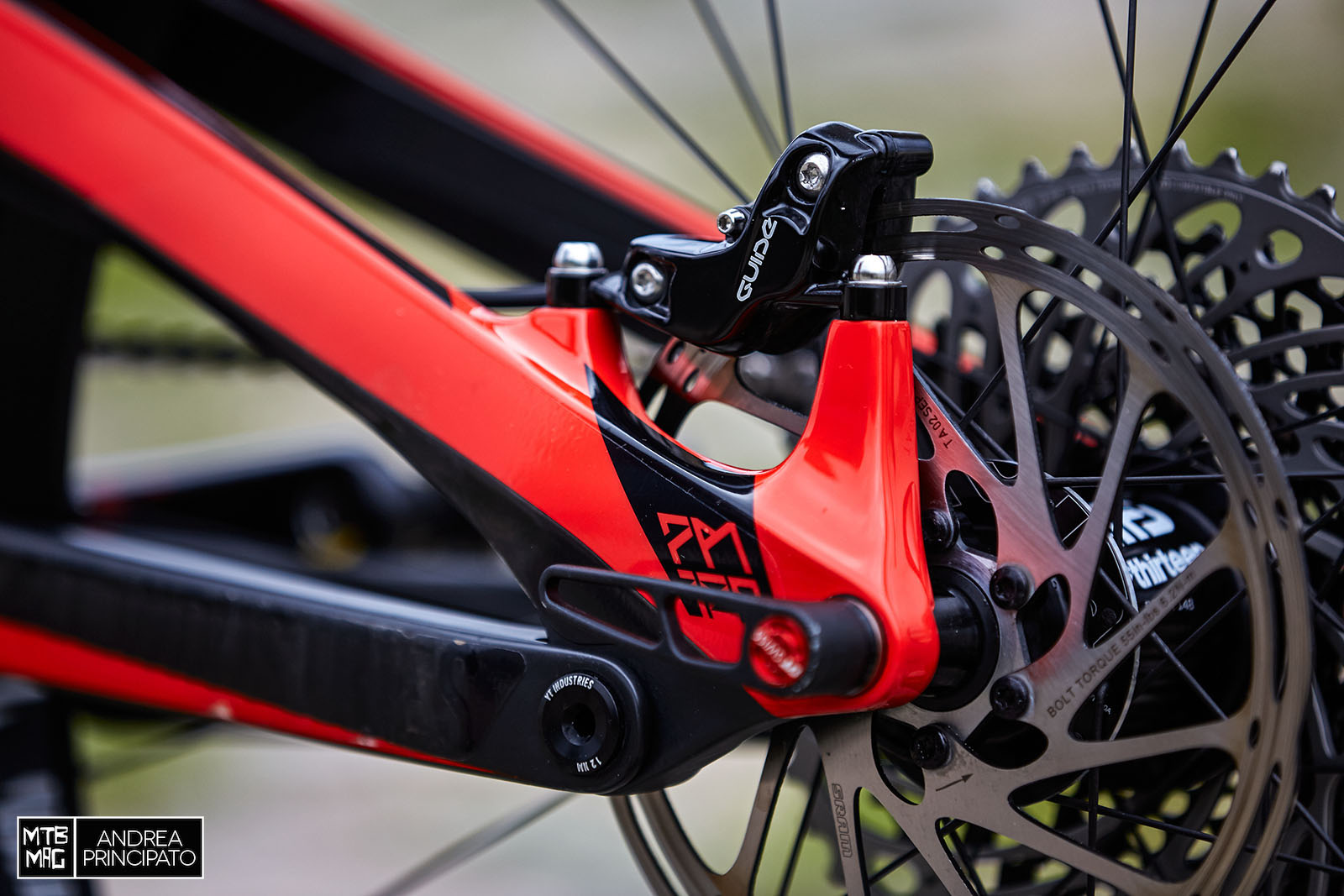 The cockpit is provided by RaceFace, in a 35mm standard. The bar is a carbon fiber SIXc with 780mm of width and 35mm of rise, which affects the overall handlebar height, as we will see further on. The stem is a 50mm Turbine which is replaced by the 60mm one on the L and XL sizes. 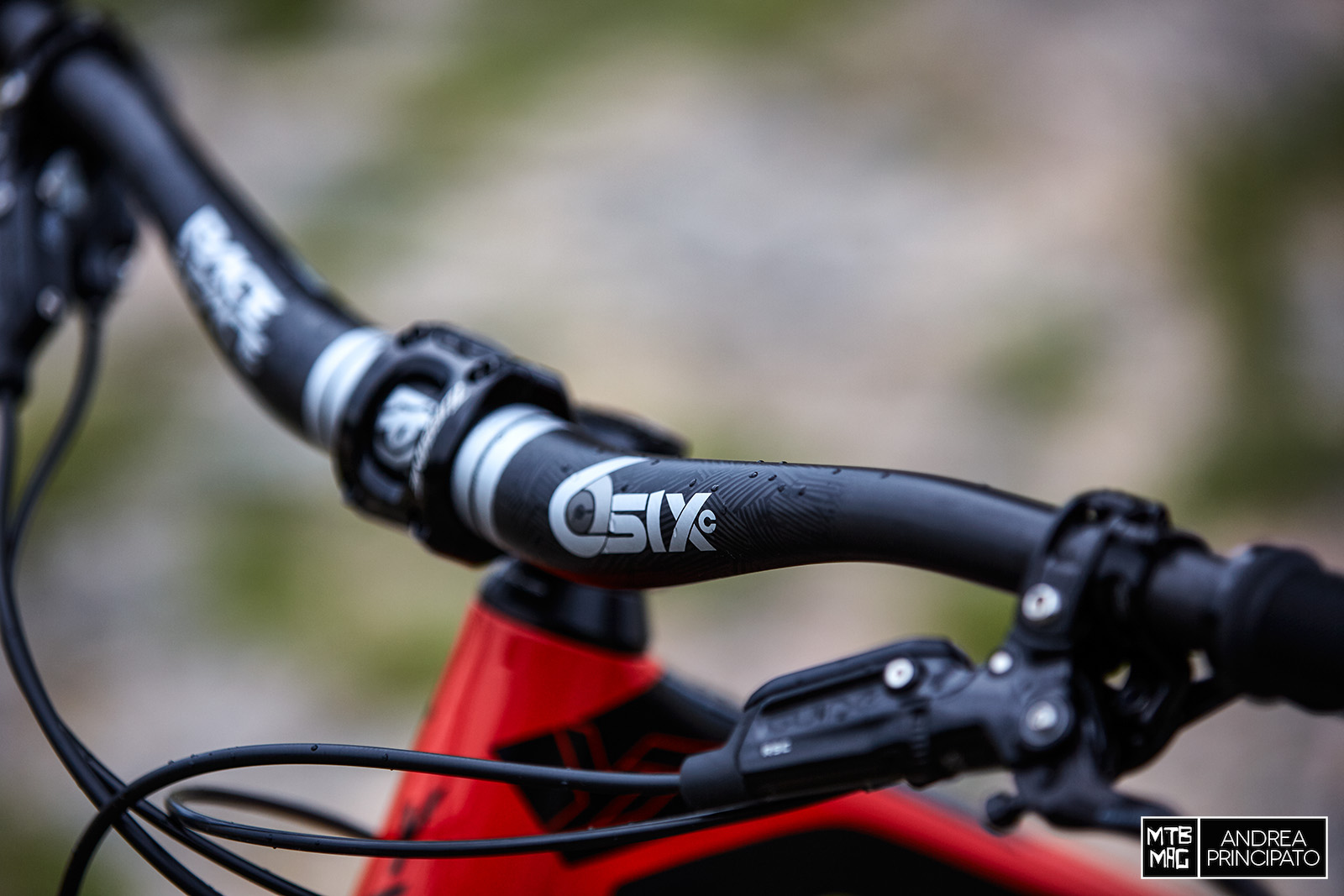 RaceFace also supplied the dropper post: a Turbine with 150mm of travel and internal cable routing. On the Small size option of the bike, the Turbine travel is of 125mm. The remote is a 1x version with the same position and functionality as a classic shifter lever. It is comfortable, handy and smooth to use thanks to the increased leverage ratio. On the Jeffsy, the geometry can be adjusted between two positions using the Flip Chip, which is an insert that anchors the shock to the rear triangle. By switching its position, geometry values change: head angle and seat angle change by 0.5° and bottom bracket height moves by 6mm. We found the Low position geometry to be very well balanced, aggressive and totally in line with the style of the Jeffsy, both in terms of climbing and downhill. After a few rides in the High position, we came to the conclusion that the Jeffsy loses a bit of its intended character while offering just a negligible increase in the climbing performance, so we opted to keep on riding in Low position. Cable routing and protections are worth mentioning. Only the shifter and dropper post remote cables run inside the frame. The latter comes out close to the bottom bracket shell, runs into the chain stay and comes out again near the Horst pivot, close to the shifter. The brake hose follows a different path, completely external to the frame to make maintenance easier, and it is anchored with standard cable guides and two screw-on supports on which the bottle cage can also be installed. V4L kinematics leave enough space for a small bottle cage. Since it is not a standard slot, YT created the Thirstmaster 3000, a carbon fiber bottle cage with right side extraction and specific 0.5l YT water bottle, with an additional elastic band to fix a pump if needed. The bottle cage locks the water bottle safely, but extraction and repositioning is not very comfortable, for this reason and considering the small dimensions, we chose to do not install the Thirstmaster 3000. You can easily feel comfortable riding the Jeffsy: thanks to the aggressive but balanced geometry, the rider is at the center of the bike and can efficiently load the front since the seat angle is quite steep, this way you can face very steep climbs without losing grip on the front wheel. Due to the height of the headset’s upper cup and the 35mm of rise, the overall height of the handlebar is bit higher than average, and even with the stem in the lowest possible position, the handlebar sits higher than the position we would set. Anyway, the dominant riding position over the bar reduces this feeling of being too high while pedaling, and you can comfortably ride for several hours. The Enduro oriented components, especially wheelset and tires, make the bike not the most agile on fast climbs in comparison with lighter competitors, but it’s still above the average and overall we found it a good bike for long rides over many meters of altitude. Due to the very sensitive first part of the travel, the suspension is affected from some pedal bob when you pedal on flat ground, while on climbs, with the suspension more compressed by the increased rear load, the shock works in its mid stroke providing more stability. Setting the compression at position 2 out of 3, you can further improve the stability of the suspension system during pedaling, thanks to a more stable shock. The lock position is almost a full lock out and therefore it is better to use it solely on smooth climbs, while on rough or technical sections it is better to take advantage of the good traction provided by the medium position. On technical climbs the Jeffsy is very nimble and it overcomes obstacles incredibly easily. Despite its aggressive geometry it behaves like a real Trail bike, precise and intuitive. Precision and maneuverability are the first things you notice once it’s pointed downhill. The limit of the Jeffsy in downhill is definitely higher than a standard Trail bike and it is closer to most Enduro bikes, in particular, the less extreme models of a couple of seasons ago. The riding position is confident and balanced. The stack is pretty high but the bike overall is quite low and you have enough space to control the bike with your legs, taking advantage of the great maneuverability and nimble nature and the precision with which you can make directional changes. Overall, that produces a very satisfying riding experience. The reach is wide and this results in a comfortable, central position for the rider, providing stability and control, even on the most technical and rough sections, where the downhill performance of the Jeffsy can be fully realized. The suspension is perfectly calibrated for descending, with the behavior of its 150mm of travel, it can be compared to most modern Enduro bikes. The confidence inspiring downhill performance out back sometimes put in trouble with the Fox 34 up front. Even though is a good fork in every condition, it tends to fatigue the arms at a higher paces on the long rides. The rear end is very stable despite the swingarm not being super stiff due to the long seatstays. The sensitivity of the beginning stroke is excellent, providing optimum traction and comfort. The mid stroke provides support and is very responsive, but still has an high capacity for swallowing mid sized hits and leaving a good margin before bottoming out. The highly progressive end stroke allows you to ride with an aggressive style and just send it. It is a fact that aggressive Trail bikes are the new trend. At present the knowhow and materials allow for the design of light bikes with relatively long travel, and high performance components, precise geometry and balanced kinematics. The results are versatile bikes, able to climb with ease and to satisfy on the downhills as well. Among all the bikes we’ve had the chance to try, the Jeffsy 27 is definitely one of those which embodies this new trend the most. The “one bike to rule them all” bike does not exist… but YT found something that comes really close.