Since 12 months now, Muldox had been trying to convince us to join him on a trip, which, by his words, would have become an event of historical importance: Conquering the Piz Umbrail (3.033 m above sea level), a summit on the boundary between Italy and Switzerland not far from the Stelvio pass.

Even if Niccolò, Zergio and I have been trying to avoid the request for about 300 days, our excuses regarding unknown “better times” were slowly running out. Also the ones related to job and family issues and strange allergies weren’t working anymore: Muldox even placed a tent in front of my porch. Therefore, it was time to do something about it immediately!

The date had been set after a brief email blast: the 14th of August (in order to guarantee the successful outcome at least for the following day, “ferragosto”). We no more hid the doubt that gnawed us: a tremendous fatigue was lying before us!

Why had the MTB world left the area of the Piz Umbrail undiscovered? Why couldn’t we find any trace of a previous exploration?

The likely catastrophic outcome of this adventure was concerning all of us except “the sheriff”, who arrived with great advance at the meeting morning, and was ready to go while wearing his best outfit and a big time smile. Zergio had taken it worse than us and, in order to defeat his anxieties, he had spent the night with brandy shots. He therefore arrived late, pale and pleading for an aspirin, which he believes to be the cure to every ill!

Niccolò, on the other hand, had to put a considerable strain to his family relationships. He still wore the noticeable marks of the beatings. And then there was me. I still wasn’t completely awake (as always) and I was simply hoping not to suffer too much…

Having disassembled and reassembled the pieces of 4 persons and their 4 bikes out of one single car, we had no other choice than to let destiny take its way…

However, the fresh and smooth air of the altitude awakened a sprinkle of optimism in us. The great scenery of the Ortles and the most famous trails of the Alta Rezia were at only a few steps from us: there were an increasing number of morning bikers in front of the Bocchetta Forcola.

We weren’t minding the baffled gazes of the hikers, since it wasn’t the first time we were facing an important climb of a mountain peak, of which 500 meters of altitude had to be made by carrying the bikes on our backs… 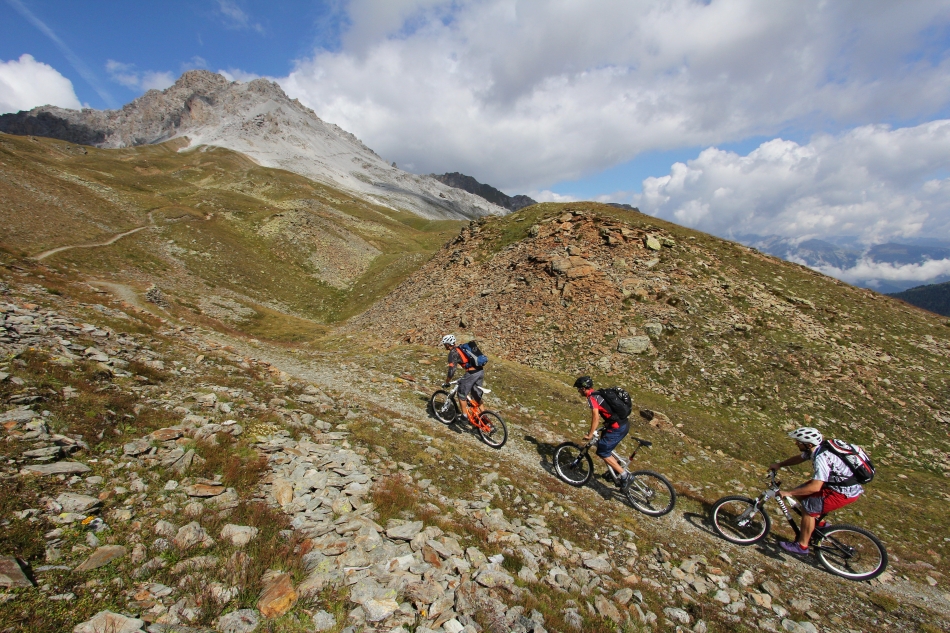 The ascending trail only enabled us to discover the area in an incomplete way, thus leaving many unknowns behind, especially on the north face, where our descent took place.

After all, except a section that is tricky when carrying a bike with you, the group was proceeding happily. Even Niccolò and Zergio seemed to be enthusiastic about this trip: You don’t get to see such sceneries every so often!

Even the “sheriff” was speechless, and also breathless, towards the view from the summit. He was happier than ever, rubbing his hands together and drooling from his mouth at the thought of the downhill waiting before us, which he had planned accurately by studying maps of the area over and over.

We found him with his face to the ground, searching for previous rubber marks, just to prove his victory!

A last adjustment to the tire pressure, four gestures for good luck and off we went! Let the true adventure begin…

The trail seemed to be ideal for mountain bike riding from the first moments on, even if it was built for completely different purposes.

As we raced down the slopes, as if time had stopped, a feeling of joy pervaded our quartet. There was just a short lapse of time enabling Zergio to say “shit man, what a trail!” after a satisfying burp. 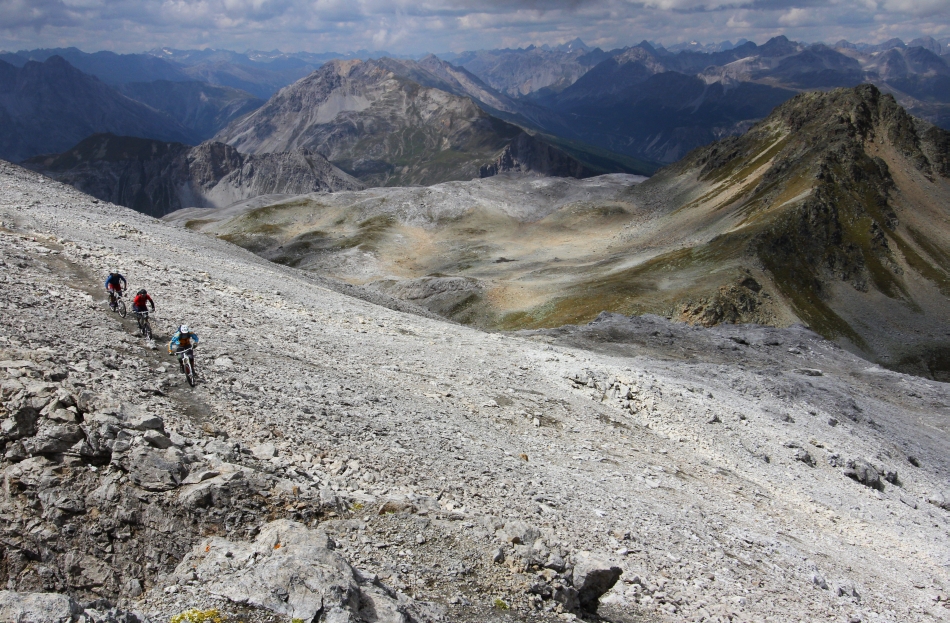 There was a new discovery, a new entrancing light and an unexpected perspective after every meter and each turn! The single-trail descended in a flawless flow, continuously changing, but in an involving and stunning way.

I can only let you imagine the lake Lago di Rims, seen from above and lit by the light of a late afternoon!

Some of us were rediscovering the remains of brandy from last evening, others were writing poems to their love, and others were rubbing their hands, not concerned by the risks they were taking. I wouldn’t focus on the drooling for reasons of public decorum. 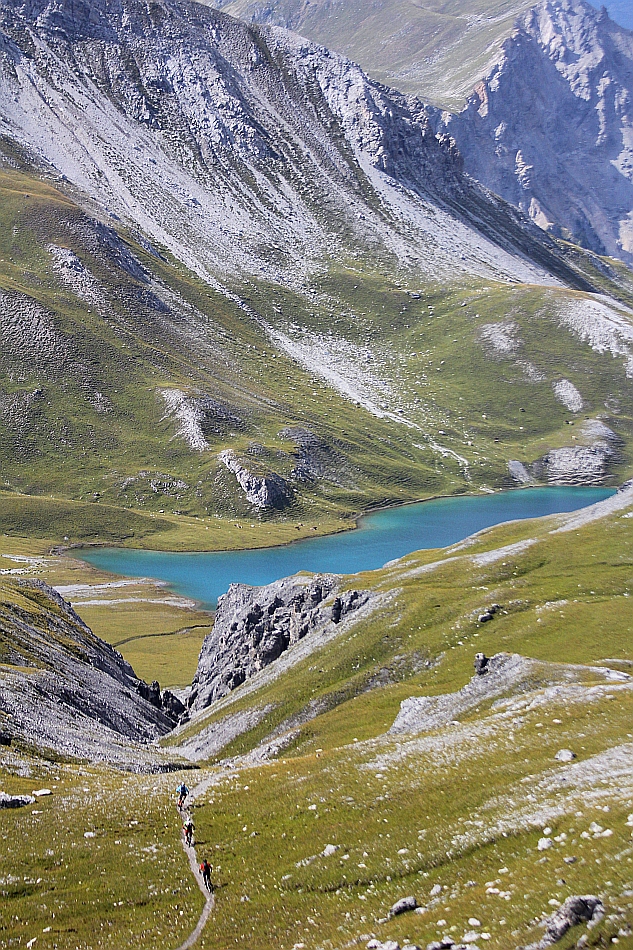 A last drop towards the Val Mora, which still hid many turns, sharp and wide, and also jumps of every kind: small, big, bigger and huge for those who could ride them. 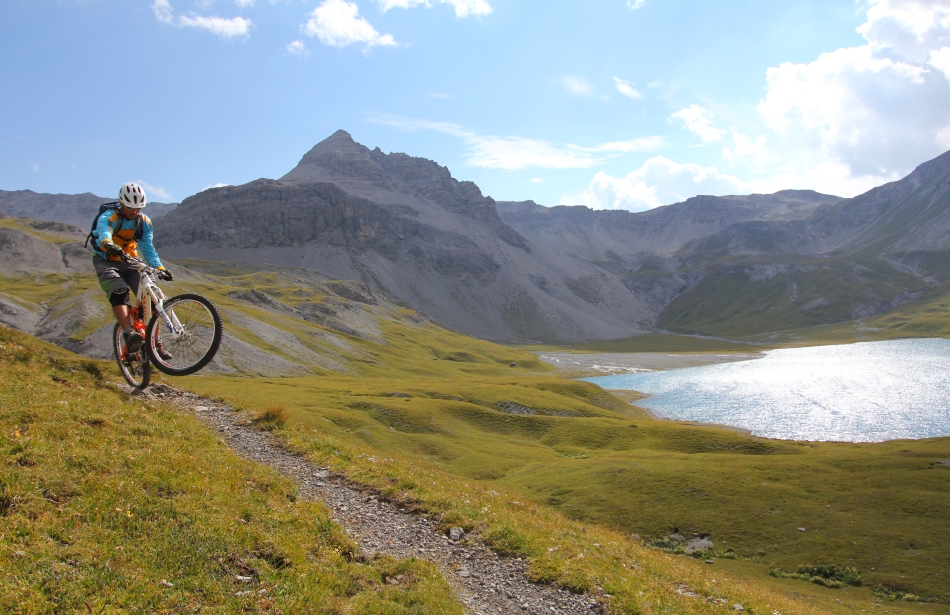 There were several cows along the route, but there weren’t any bipeds in sight. It was pretty natural for us to expect someone collecting a payment at the bottom of such a stunning trail, but there simply wasn’t anyone around. Only us!

The point of squeezing 4 persons and 4 bikes back into one car was still far away: A long pedaling part and some downhill fragments were still ahead of us; it was time to set aside what seemed to be a symptom of exhaustion and also the “sheriff’s” growing hunger. The personnel at the Cancano restaurant won’t forget the biker who once ate 7 pastries in a row, at 7pm.

It was easy to disregard Muldox’s “I told you so” and especially his new proposals (this time they were less fearful) to explore new, undiscovered peaks (at least he said so), since it had been such a great day.

Text and pictures by: Marzia Fioroni (except where given differently)