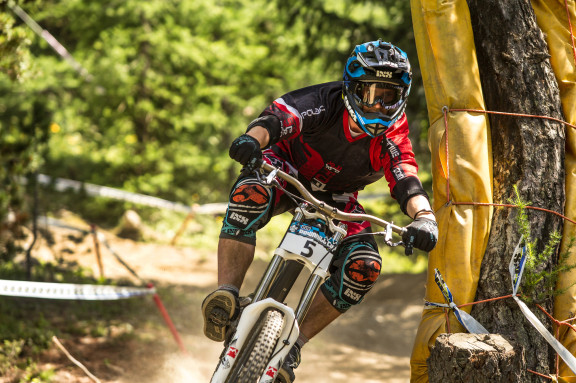 Another round of the iXS European Downhill Cup is in the books. At the third venue of this year’s European Cup in Pila, Italy, Tahnée Seagrave and Slawomir Lukasik were the rather unexpected winners. And at least on Sunday, the conditions were nearly perfect and provided 350 riders from 22 nations with a lot of fun.

Since 2010, Pila is a classic venue and annual host for the European Downhill Cup. The little ski resort is situated near Aosta and provides a breathtaking view with its 1800 meters above sea level. This year’s track was prepared by none other than Corrado Herin who is also a former World cup winner. And he did a very good job: The 2600 meter course with 500 vertical meters to play with demanded a lot of skill from each and every rider. 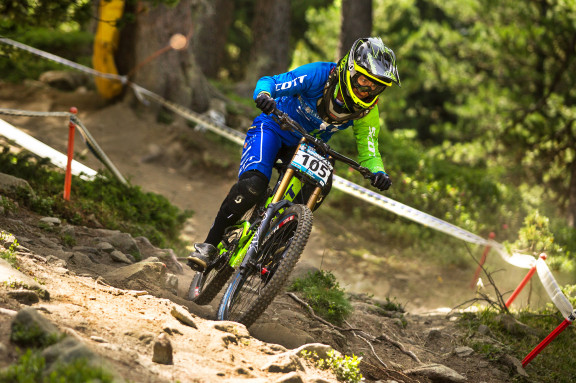 The weather on Saturday was dominated by a lot of rain and a thunderstorm that began soon after the start of the Elite Men seeding run. Due to these rather unfortunate conditions and a nearly destroyed track, this first timed run in the Elite Men category had to be cancelled and postponed until Sunday morning. The Elite Women category was dominated by Emilie Siegenthaler (SUI – Gstaad Scott) who had shown her talent already in the GoPro Course Check and repeated this with a time of 4:38.269 minutes and a 10 second lead in qualifying.

Sunday’s training session had to be reduced to only 2 hours – after that the seeding run had to be continued. The weather was on its best behavior again, the track was repaired and less dusty and the riders were provided with nearly perfect conditions again. The winner of the Elite Men seeding run came from Switzerland this time: Lutz Weber (SUI – iXS Gravity Union), the Swiss Vice-Champion not only set the best time, but also provided the perfect basis for an exciting race.

In the finals of the Masters category Paolo Alleva (ITA – Team Scout/Nukeproof) took the win and edged out seeding run fastest Stencel Rostislav (CZE – Bikeplac racing) who went second in Pila, but still remains on top of the overall standings. The podium was completed by Manuel dal Pozzo (ITA – Scout/Nukeproof).

In the U17 category it got really exciting this time. Due to the varying winners of the single races, the overall standings also keep changing constantly. At the moment, Silas Grandy (GER – Moto Club Faro) is the one to beat in his category after he was Spicak’s fastest and also managed to win again this week, followed by Loris Revelli (ITA – Argentina Bike) and Brad Swinbank (GBR – Steve Peat Syndicate). 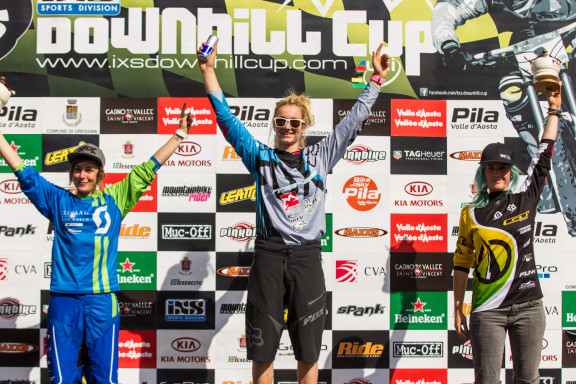 The U17 female category Viktoria Gimenez (FRA – Roigo racing Les angles) became Tahnée Seagrave’s successor as the only participant of her category. And regarding Seagrave’s achievement today, this might be the start of a similarly bright future for the 16-year-old Gimenez.

The 18-year-old Tahnée Seagrave (GBR – FMD Racing) herself was one of the first women down the hill after a flat in qualifying. And when she placed herself in the Red Bull Hot Seat with a time of 4:40.339 minutes, she stayed there: nobody was able to take the lead away from her. After a solid but moderate 13th place in Pila in 2012, not even the odds-on favorite Emilie Siegenthaler could beat her this year. While Siegenthaler went second, Zarja Cernilogar (SLO – Blackthorn) ended up in third and extended her lead in the overall standings.

The Elite Men category’s participants had to face harder conditions this time, as there was not exactly a lot of time to relax between training session, seeding run and the finals. In the meantime the sun had gotten stronger and the temperature increased. When Matthew Walker (NZL – Kingpin Bikes) put himself in the Hot Seat for two hours (!) he obviously enjoyed a cold Red Bull under his straw hat. The first one to get close to his time was his compatriot Bryn Dickerson. But Slawomir Lukasik (POL – Fro Pro) did not agree with this New Zealand double and finally dislodged Walker from the Hot Seat. There were only five riders left on top of the hill and every single one of them was eager to win. The first one was Wyn Masters (NZL – Team Bulls), who could not reach his New Zealand role models. After that, Ziga Pandur (SLO – Unior Tools Team) crossed the finish line with a time 3 seconds slower than Lukasik’s. Even Dominik Gspan (SUI – EWZ Mountainbiketeam Loop) and Joseph Connell (GBR – SC Intense) did not reach the best time.

Last man down the hill was Lutz Weber, but he also failed to edge out Lukasik for victory and ended up in seventh place. Lukasik won this third race of the iXS European Downhill Cup ahead of Walker and Gspan, whereas Ziga Pandur took the lead in the overall standings in the Elite Men category and pushed the absent Robin Wallner (SWE – Ream W-Racing) in second, followed by Joseph Connell in third.

Pila is definitely one of the most popular venues of the European Cup and demonstrated its good reputation once more in 2013. And – seriously – a little rain never stopped a mountain bike race! After a short break, the Cup will be continued in Switzerland at the Wiriehorn. All other race dates and information can be found on  ixsdownhillcup.com or at facebook.com/iXS.Downhill.Cup