Matt Beers and Jordan Sarrou (NinetyOne-songo-Specialized) finished second on the stage, retaining their healthy lead in the overall standings. They now have a 06:38 lead over BULLS 2 in the general classification, with one day of racing left.

Trek-Pirelli’s Samuele Porro and Fabian Rabensteiner (fourth on Stage 6) sit in third overall, the Italian duo are nearly 14 minutes off the leaders.

“It’s unbelievable, I have no words,” said Stiebjahn. “I must say thank you to the whole team and especially to Martin, who was so strong today. I am so happy with this win. I always had the feeling that I had the potential to win a stage and in the end, it is also about the right partnership and a bit of luck. We went at the right moment today and it worked out super well. I also want to say Matt and Jordan were strong and they really deserve that yellow jersey.”

Past winner Stefan Sahm, riding with the leaders on the media e-bike, says the wet and muddy conditions suit Stiebjhan. “When he sees the rain, he is smiling on the inside.”

Two-time Absa Cape Epic finisher Martin Frey was also comfortable in the wet and muddy conditions. “I knew it would suit us today,” said Frey. “I felt good right from the start and in the end, the conditions were an advantage for us. I really enjoyed that stage.” 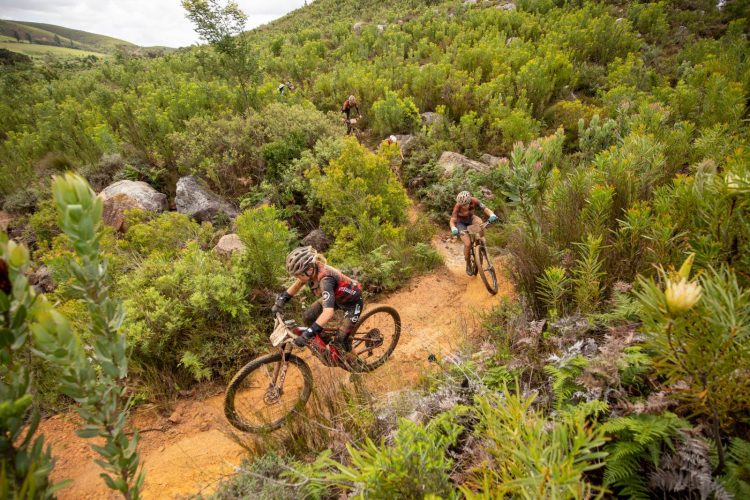 The Stage 6 men’s race started with BULLS 2, NinetyOne-songo-Specialized, Buff Scott MTB, and Pyga Euro Steel 2 making all the early moves. Heavy rain had fallen overnight, so positioning in the bunch was crucial. Wessel Botha of {type}DEV Nanotime put in an early burst to lead the race for a short while, but he was soon reeled in by the general classification heavyweights.

For nearly half the day’s racing, the leading teams remained close together. The shake-up came, as it has on every stage this year when the climbing for the day started. Hans Becking and José Dias (Buff Scott MTB) made the early dash uphill, showing no fatigue from their tremendous efforts yesterday and the day before. BULLS 2 responded well, though, as did Beers and Sarrou.

For the next 10km the three teams enjoyed a game of duelling bicycles, until commentator and previous Absa Cape Epic winner Annika Langvad put the commentator’s curse on the riders. Moments after she had said ‘I expect some drama soon’ in the studio, Buff Scott was hit with a rear puncture. With Becking repairing the damage, BULLS 2 and NinetyOne-songo-Specialized were able to race away. Trek-Pirelli then moved into third.

From then on it was a case of ‘follow my leader.’ Beers and Sarrou just needed to keep Frey and Stiebjahn in sight, making sure the BULLS 2 pair didn’t eat too much into their overall lead. At one stage Sarrou appeared to be struggling but he gathered his composure and finished the day strongly. “I just turned my brain off, and let my legs do the thinking,” said Sarrou. 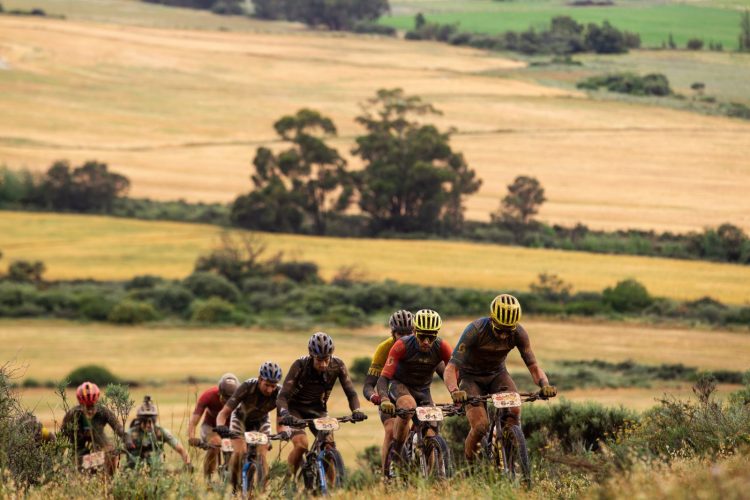 Over the final climb and on the descent, BULLS 2 remained in front, Beers and Sarrou always loitering nearby. The final 10km was fast and flat through vineyards, though filled with hazardous puddles from the heavy rain. As the two teams entered the grass finish area, there was the slightest hint of a sprint finish, with Sarrou keeping pace with Stiebjahn. Beers had run out of fizz though, and the BULLS 2 team took the stage win.

“The way the route has been – with the first four stages all over four hours without a TT or something to break it up, it’s starting to tell,” said Beers. “The conditions were super bad, we were just getting bogged down in the mud (I blame my weight – I’m heavier so I think it was more difficult for me, haha) but all the boys, Buff Scott and BULLS 2 never let us have a free watt. I appreciate the positive racing and I enjoy every day. I’m actually going to be a bit sad when it’s over.”

The final stage of the 2021 Absa Cape Epic, The Trail to Val de Vie, is a relatively breezy 68km from Wellington to Val de Vie. Beers and Sarrou remain in control, but Frey and Stiebjahn will certainly look to put pressure on the leaders right from the start.

The Race That Measures All very nearly saw a new stage winner in the women’s race in Wellington today. But in the end, Sina Frei and Laura Stigger (NinetyOne-songo-Specialized) won a sprint finish to claim their seventh straight win (one Prologue and six stages).

Mariske Strauss crossed the line first, but Frei and Stigger came in together, with Candice Lill just off the pace. It meant the Faces CST team had to be happy with second on the day, after an excellent ride. With wet and muddy conditions and a consistently up and down race profile, the 81km Stage 6 was another challenge for elite and amateur riders alike. Frei and Stigger have an insurmountable overall lead, so the drama was always most likely to come from another team deciding to attack the stage. That attack came from Faces CST, who started pushing the pace from the halfway mark.

By 48km into the stage, Faces CST and NinetyOne-songo-Specialized had pulled away from Salusmed (Ariane Luthi and Robyn de Groot). With steep climbs and technical descents the feature of the second part of the stage, Strauss, Lill, Frei, and Stigger remained close throughout.

On the final descent, Frei and Stigger pulled away slightly, and then on the final 10km – which was fast and flat through the vineyards – they looked to have the stage wrapped up. Stigger, though, took Frei down a wrong turn, allowing Straus and Lill to move into the lead.

From the Live Broadcast, it appeared that Lill and Strauss waited for the overall leaders to rejoin them. But Strauss confirmed after the stage, with her typical good humour, that it was merely an optical illusion. “We didn’t wait,” she said. “It just looked like it! Haha.” Strauss led the three riders into the final stretch, dodging massive puddles on the way to the finish. On the grass finish chute, Strauss was still in the lead and looked the strongest of the four. As she attacked, Lill was unable to go with her, allowing the NinetyOne-songo-Specialized team to block her out and cross the line together for the stage win.

“That was quite an interesting and adventurous stage,” said Stigger. “I lost two contact lenses, and I took a wrong turn!”

She added that Lill and Strauss pushed all the way. “Candice and Mariske really made us suffer today. They were very strong. It was super close in the end. It was a good race.”

Sina Frei said the pace was flat out at the finish. “Mariske was incredibly strong today. Towards the end, she was really putting out a good pace and we worked hard to stay with her. After four hours of hard riding, it’s not easy to sprint, but we managed to get it right and we are thrilled with another stage win.”

After a good day on the trails, Strauss and Lill have now moved into second place in the overall standings of the women’s race, with an 11-minute lead over Luthi and De Groot. “We ride each day depending on how we feel,” said Strauss. “And today was just a really good day where we felt strong throughout. I’m very proud of our effort and can’t wait for tomorrow.” 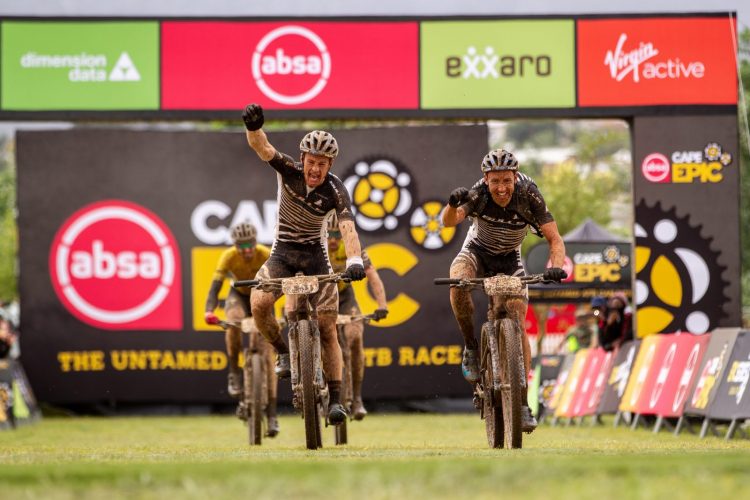 At 68km, Stage 7 should be a short and explosive ride tomorrow – Lill and Strauss will no doubt try once more to claim a stage win.