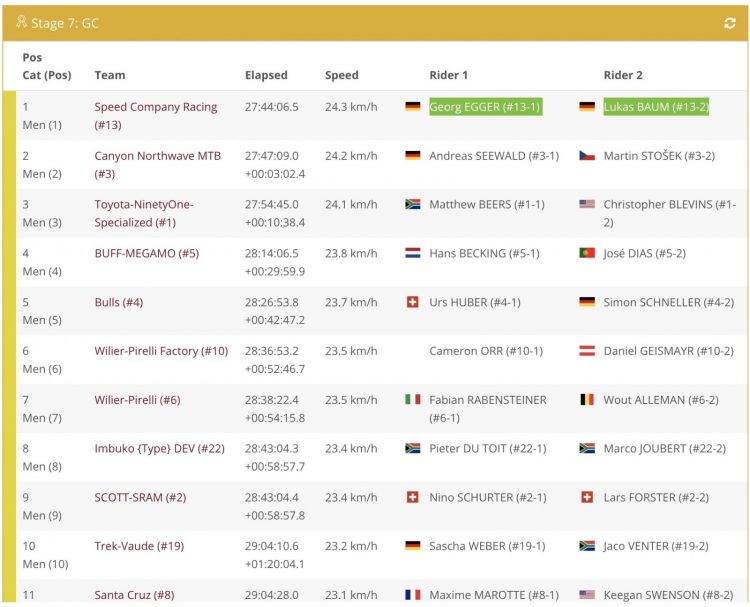 The Grand Finale of the 2022 Absa Cape Epic, The Race That Measures All, which finished at the Val de Vie Estate outside Paarl on Sunday, was the scene of an upset for the ages.

Speed Company Racing’s Georg Egger and Lukas Baum made history at the Absa Cape Epic by becoming the first team in the history of the event to chase down the overall leaders on the Grand Finale stage and claim the crown for themselves.

Never before in the Absa Cape Epic has the race lead changed shoulders on the final stage – the closest finish to date was in 2007, where Karl Platt and Stefan Sahm just about hung on for the win, a three-and-a-half minute victory over future Tour de France star Jakob Fuglsang and Roel Paulissen (Cannondale-Vredestein). After eight days of yellow-jersey yo-yo, the German pair won their first of three titles together, but only after a brutal final stage into Lourensford Wine Estate.

Fast-forward 15 years, and the air of inevitability on the Grand Finale start line in Stellenbosch extended beyond the can-do minds of the race’s 2022 underdogs. Team Speed Company Racing had been talking up their chances of winning the event outright since a surprise second-place finish in the opening Prologue in Lourensford, seven days before. The German upstarts quickly became crowd darlings; privateers in the biggest mountain bike race in the world taking the racing to the factory teams, winning stages and hearts with their aggressive approach to each stage.

On Saturday’s Stage 6, they had cut their deficit to Andreas Seewald and Martin Stošek (Canyon Northwave MTB) by nearly four minutes to head for Val de Vie needing just two minutes and 46 seconds to snatch yellow. That they were going to hit it hard, from the gun, was a given. Could they make it stick? The form book said yes.

Only SCOTT-SRAM’s Nino Schurter and Lars Forster and the Santa Cruz duo of Maxime Marotte and Keegan Swenson could go with them when they pressed launch early on the 68km, 2 000m brute. Muratie’s sublime trail network was the site of the first detonation, and it would prove to be the one that counted. By the 16km checkpoint, Egger and Baum had already taken 40 seconds over Seewald and Stošek, who had defending champion Matt Beers and his new (Toyota-NinetyOne-Specialized) partner Christopher Blevins for company.

The foursome worked well to limit the gap to the charging Germans for the first hour-and-a-half of racing. Past winner Stefan Sahm, riding the media e-bike behind Speed Company Racing, could barely keep up. “It’s like they are winching themselves to the finish,” he said. “It’s the right thing to do; they have nothing to lose.”

The gap hovered under a minute, but then slowly started stretching before free-falling as they hit the final climbs of the race in the Simonsberg Conservancy. Santa Cruz and SCOTT-SRAM kept pace with Speed Company Racing for much of the day, potentially setting up a final-day sprint finish. But with barely believable energy, Baum and Egger attacked once more on the final, steep, winding climb of the 2022 Absa Cape Epic. The elastic snapped, with Santa Cruz and SCOTT-SRAM dropping back.

By the time Speed Company Racing hit the Val de Vie Estate singletrack, they might have known their lead was up to five-plus minutes (with just Lukas’ dad their only backup crew, getting information on the course was difficult), but it didn’t show as they sprinted to the line almost two minutes clear of SCOTT-SRAM.

A dejected Canyon Northwave MTB rolled in nearly six minutes after the new Absa Cape Epic champions, now second overall with Beers and Blevins retaining their third place after one of the most entertaining, exciting, and unpredictable weeks in the history of the Untamed African MTB Race.

‘I’m so emotional right now,” said Lukas Baum. “This is just riding my bike with my best friend and it has paid off in a great way.”

Egger added, “We had no time checks out there, we had no way of knowing what was happening, we didn’t know we were in the overall lead. We knew nothing. It was actually better that way because if we knew we had the lead we probably would have made a mistake.”

An exciting, emotional, and history-making eight days of racing has come to an end, but riders eager to tackle the 2023 Absa Cape Epic can secure an entry on 28 March 2022 at 15:00 GMT+2 on cape-epic.com.

The America-Argentina team of Haley Batten and Sofia Gomez Villafane (NinetyOne-Songo-Specialized) are the winners of the 2022 Absa Cape Epic CM.com Women’s category.

The first-time Absa Cape Epic entrants moved into first place in the CM.com Women’s category on Stage 1 last Monday and never looked back. With perfect stage race tactics throughout the event, they finished 12-and-a-half minutes ahead of second-placed Faces Rola (Candice Lill and Mariske Strauss).

Early on in the stage NinetyOne-songo-Specialized and Faces Rola pulled away from the other women’s teams, even with BMC MTB Racing’s Pauline Ferrand-Prévot looking like she meant business at the start of the stage. BMC MTB Racing dropped away after a strong start, leaving NinetyOne-songo-Specialized and Faces Rola to contest The Trail tp Val de Vie alone.

Ahead of the final stage, Candice Lill said she and Mariske Strauss would give everything to win Stage 7 of the 2022 Absa Cape Epic. They lived up to the promise by matching Batten and Villafane pedal stroke for pedal stroke.

Gómez Villafane appeared to struggle up the early climbs, but she and Batten pushed the South African team all the way. Lill dug in on the final climb of the day and eventually Faces Rola could get away. They rode home unbothered for an excellent stage victory.

“That was a dream race today,” said Lill. “We fought really hard on that last climb to get an advantage. I could tell Sofia was struggling, although we were struggling too! Mariske and I went all in from the start today and it really paid off.”

Strauss said it was an emotional finish. “I started getting really emotional with 10km to go. I knew we had it but was battling the emotions. I just had to keep pedalling.”

Despite dropping behind Faces Rola with 10km to go, NinetyOne-songo-Specialized’s overall lead was never in danger. Faces Rola crossed the line, and four minutes later Batten and Villafane arrived, waving at the crowd as they cruised down the final Absa Cape Epic finish line for the last time in 2022.

“This is just an un-freaking real feeling,” said an overjoyed Haley Batten. “We had a good week. We didn’t make too many mistakes and not much went wrong for us. Even on our weaker days, we were strong enough to limit any damage. It was tough out there. This event is so tough. I am so proud of our effort. The whole team was amazing. Everyone played their part to get us over the line in first place. The support at the Absa Cape Epic has been amazing. There is nothing like it anywhere else.”

Villafane said the morning started with Batten determined to go for the stage win. “Haley was fired up in the morning. She told me she wanted to go for the win but I said I probably wouldn’t have the legs. We kept up well with Candice and Mariske, but on that last climb I just tapped out. I didn’t have anymore. But we knew the overall lead was big, so we could just roll on to the finish and enjoy the final few kilometres of what’s been a special week of mountain biking.”