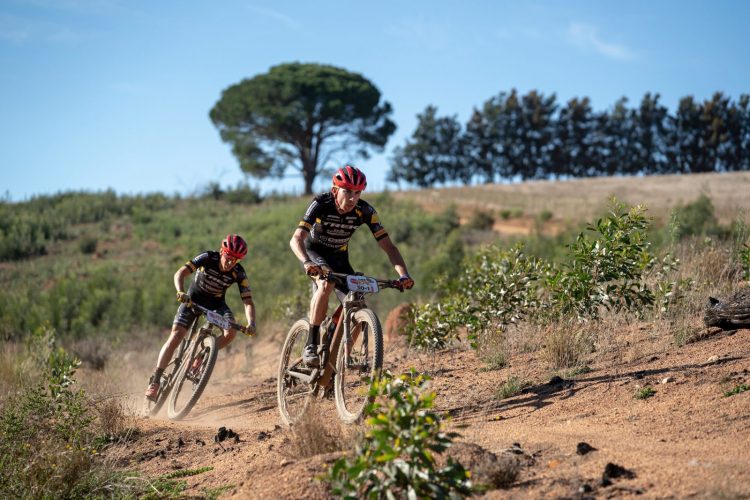 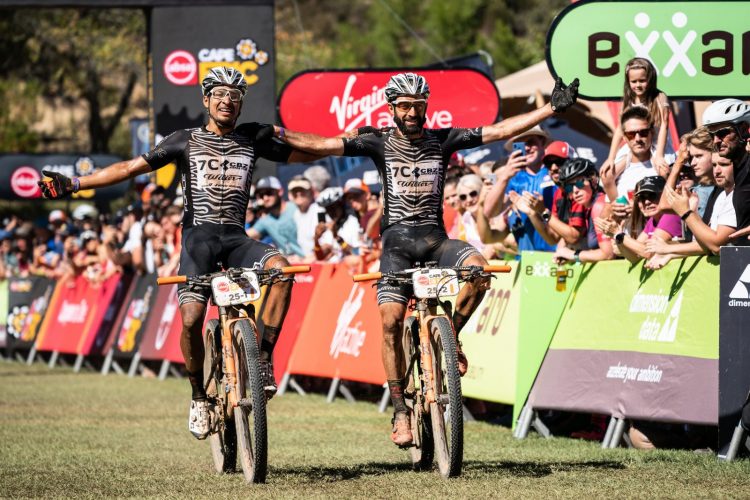 7C CBZ WILIER soloed to victory on the penultimate stage of the 2019 Absa Cape Epic on Saturday. Louis Meijato and Johnny Cattaneo seized the initiative after Trek Selle San Marco suffered a disastrous mechanical, to win the brutal 89-kilometre challenge around Stellenbosch, in a time of 03:49:21.
“Today was fantastic for us,” Cattaneo said afterward. “We had some good luck and then we tried to push hard over the last 20-kilometres,” he commented. 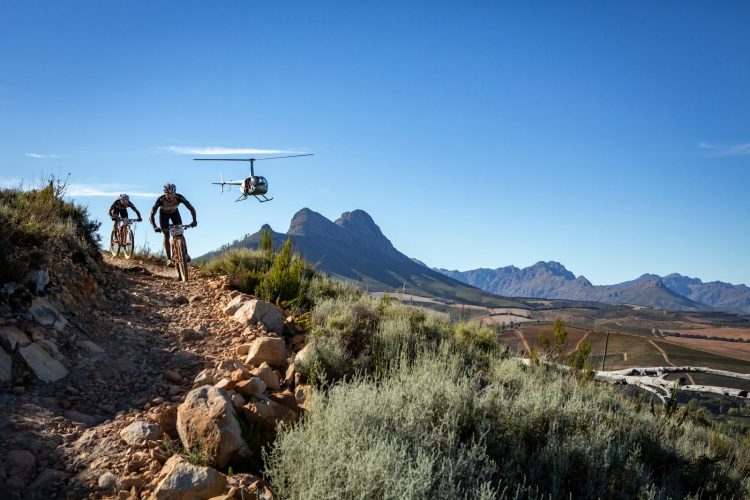 The ‘luck’ he was referring to was indeed the puncture Trek Selle San Marco (who led for almost two-thirds of the race) suffered after Porro crashed at 65kms. They were forced to stop to repair their mechanical which saw the chase bunch of Scott-SRAM MTB-Racing and 7C CBZ WILIER overtake them.
Meija and Cattaneo attacked almost immediately and stayed away all the way to the finish. “This was one of the last two opportunities to win a stage,” Cattaneo added. “That’s what we wanted so we are really happy!”
Scott-SRAM MTB-Racing were happy to ride conservatively in second place after that, content in the knowledge that they were further extending their grip on the overall Yellow Jersey. 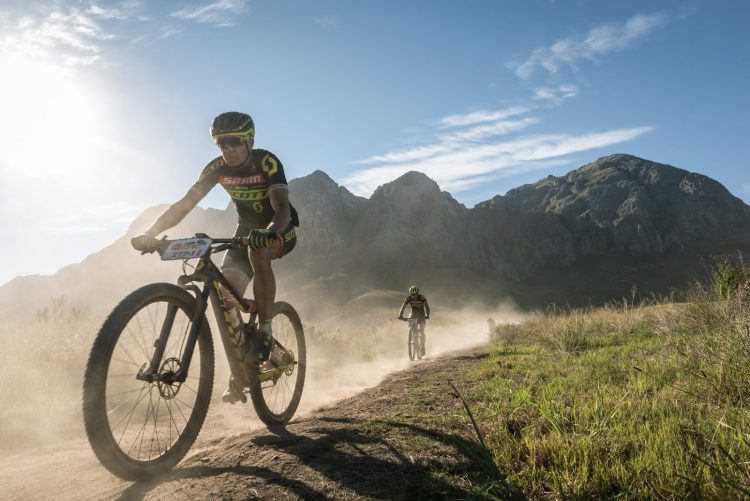 Said Forster after the finish: “Today was hard from the beginning, but we just tried to hold onto the other groups and extend our lead again.” Before adding, “we’re looking forward to the last stage tomorrow.”
The pair rode much of the early part of the stage – which featured some of the finest trails in the Simonsberg Conservancy and surrounds – with their back-up team (DSV-SCOTT-SRAM’s Gert Heyns and Andri Frischknecht). Promoting Schurter to emphasise just how important it is to have a strong supporting outfit in the Untamed African Mountain Bike Race.
“It’s essential,” he said. “No team has won before without a back-up team. But it’s also a mental thing.”
This was well proven by Trek Selle San Marco, who were without the assistance of their backup team after Michele Casagrande and Fabian Rabensteiner crashed out on the finish straight of the Queen Stage. They fought to stay in third. But who knows what could’ve been. 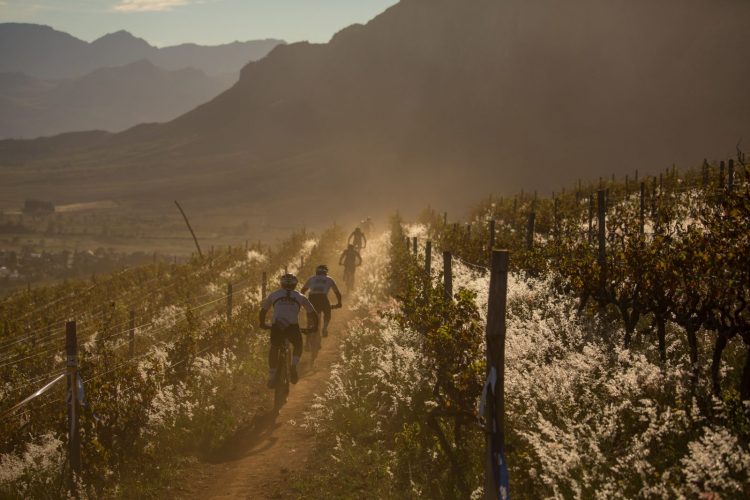 They were followed by Cannondale Factory Racing in fourth. The pair remain in second place on the GC despite another day on which Henrique Avancini had to nurse partner Manuel Fumic up the climbs.
Getting stronger by the day on the other hand, is the Absa African Men’s Jersey wearers of Matt Beers and Alan Hatherly. The young guns put in another solid effort to finish in fifth and consolidate their fifth place on the GC.
“I’m really happy to say that the body is starting to feel good again,” Beers said shortly after the finish, commenting on the recovery after his crash earlier in the week. “It was super hard with a lot very steep climbing, but the support out on route was just incredible.”
“It’s really cool to be South Africans out there,” he said. “You just get goosebumps riding through the crowds and find that little bit extra. Thank you!”
Beers and Hatherly will be looking forward to finishing it off on the Trails to Val de Vie and
claiming that final Red Jersey on the Champs-Élysées of the Absa Cape Epic. The final stage is by no means a simple showcase however and the 70km with 1 800m of climbing is bound to challenge all. 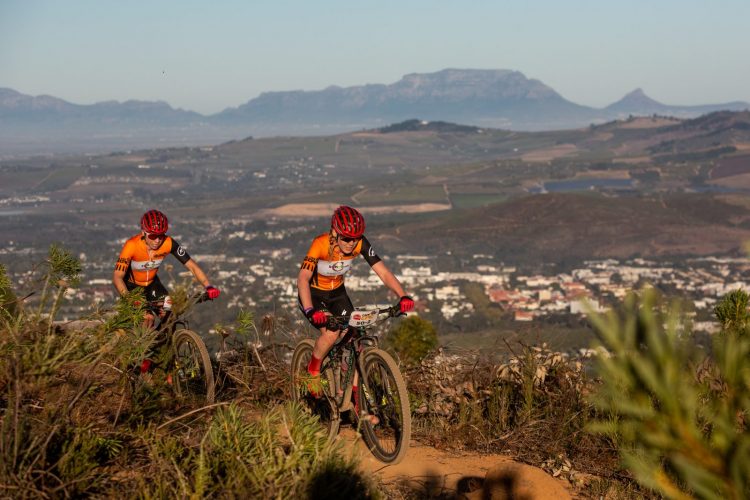 Annika Langvad and Anna van der Breggen (Investec-songo-Specialized) dispelled any vague suspicion that they were fading as the strongest Women’s category team at this year’s Absa Cape Epic with a clinically dominant performance on Saturday’s penultimate Stage 6.

After the pair of World Champions was surprisingly beaten into second position on Friday’s Queen stage, Langvad and Van der Breggen snatched their crown back on Saturday with a trouble-free ride in the 89km stage which started and finished at Stellenbosch University. They crossed the line almost nine minutes ahead of South African Candice Lill and her German partner Adelheid Morath (Summit Fin), the winners of Friday’s Stage 5.

The result leaves Investec-songo-Specialized holding a massive 30-minute lead over Summit Fin with just the final 70km stage remaining. Ariane Lüthi and Maja Wloszczowska (Kross-Spur Racing) crossed the line just under two minutes behind Lill and Morath and consolidated their third position overall, but are now more than an hour behind the leaders.

Saturday’s penultimate stage quickly turned into a procession as Van der Breggen turned up the pace on the first climb soon after the start.

“Based on experience from yesterday, we figured that we ride better when we can get away and get a gap quite early,” explained Langvad after she crossed the line on Saturday. “We chatted about it and decided ‘That might be a nice plan’.

“I said: ‘Anna, the final decision is up to you, it depends on how you feel,’ – and she just went!” said Langvad, before adding with a giggle: “And so I thought, ‘Now I just have to follow her pace’.”

Van der Breggen said she felt a lot better after struggling on Friday.

“Today was way better than yesterday. I don’t know what went wrong yesterday – I had a bit of stomach problems and there were maybe just a few small things that all just combined to make me feel not so good.

“I liked the route more today. It was beautiful singletrack today and the climbs were a bit less steep, which suits me better. We had a good pace all day today.” 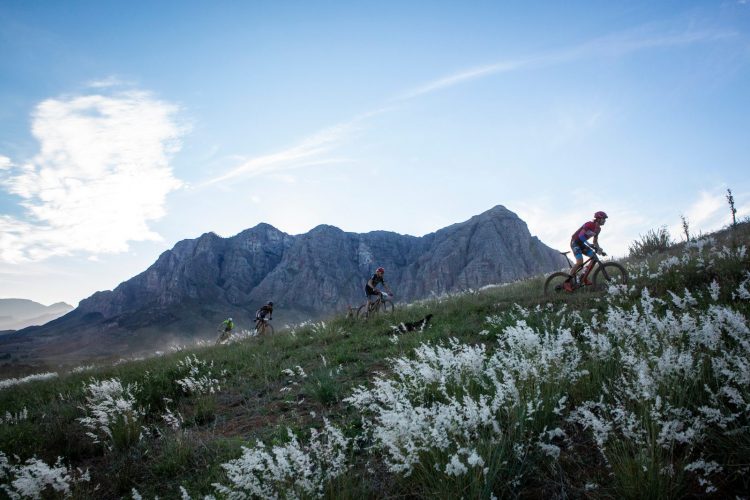 For the first time this year the pair seemed happy to agree with what everybody else has been saying since the opening Prologue almost a week ago: Investec-songo-Specialized will win the women’s category.

“I think we can do it … I hope so,” said Van der Breggen before the normally conservative Langvad chipped in and added: “I believe in us too … very much.”

Although Langvad did qualify her confident prediction: “Tomorrow is normally not as tough a day, and it would take a lot of mechanicals for us not to win … but nothing is for sure!”

In the race for the Absa African Women’s Jersey, Theresa Ralph and Sarah Hill of team Galileo Risk finished the stage sixth overall – the sixth time out of seven stages they have claimed that position – and they now virtually just need to finish on Sunday to claim that title.

Sunday’s Grand Finale stage takes riders from Stellenbosch University along the Trails to Val de Vie for the Champs-Élysées of the Absa Cape Epic. The 70km route is relatively short and the podium positions look settled, but there are pitfalls which could still create a final twist. 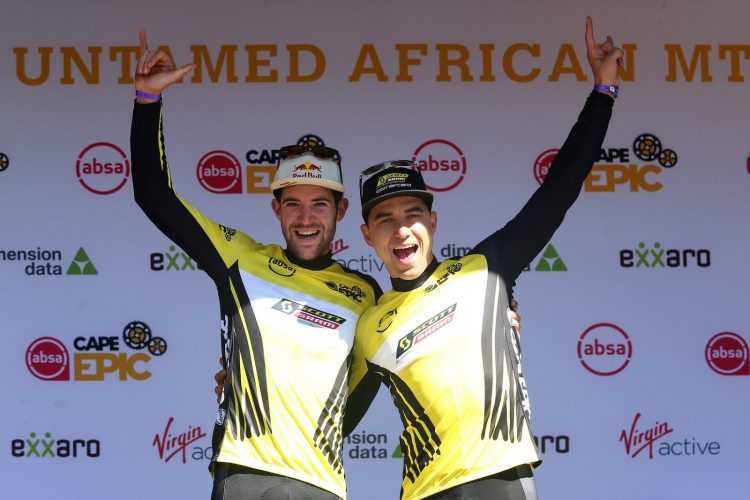