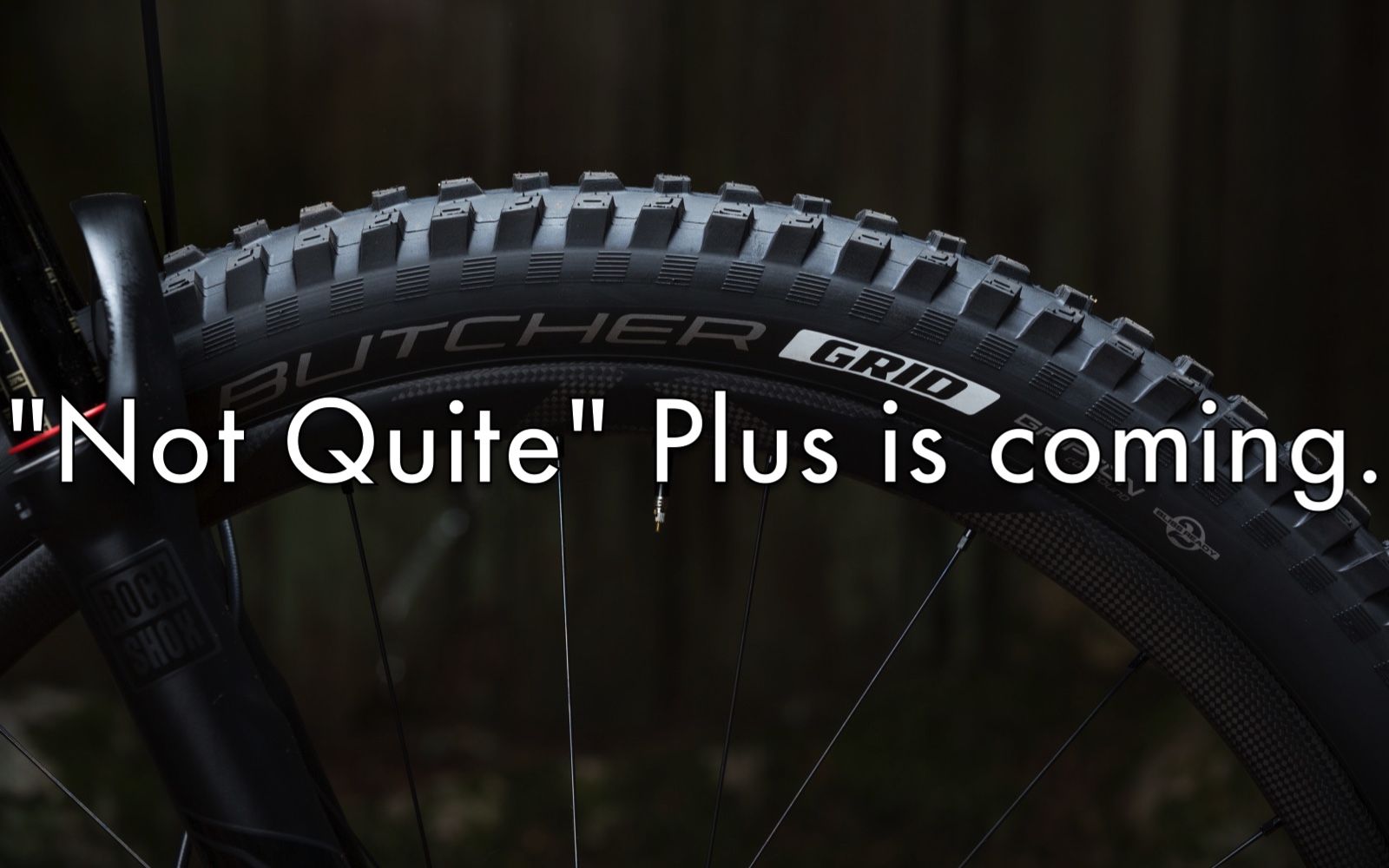 If you haven’t already noticed, a new trend is brewing in the industry.  There is an onslaught of tires coming down the pipe between the 2.4″ and 2.8″ width range for 27.5″ wheels.  When 27.5″ Plus came out, the tire width split the middle between the clown shoes that get spec’d on most Fat Bikes and your standard 2.1″ – 2.35″ wide tires that we see spec’d on most general purpose 27.5″ trail bikes.  Kind of like how 27.5″ wheels split the middle between 26″ and 29″; only these new tires would be almost be like 28.25″ wheels hitting the market.  Before anyone panics, just know that you won’t need to go buy a new rear hub or cranks, or anything else that’s brought about by new standards.  This isn’t a standard, it’s just a tire…it’s an option. 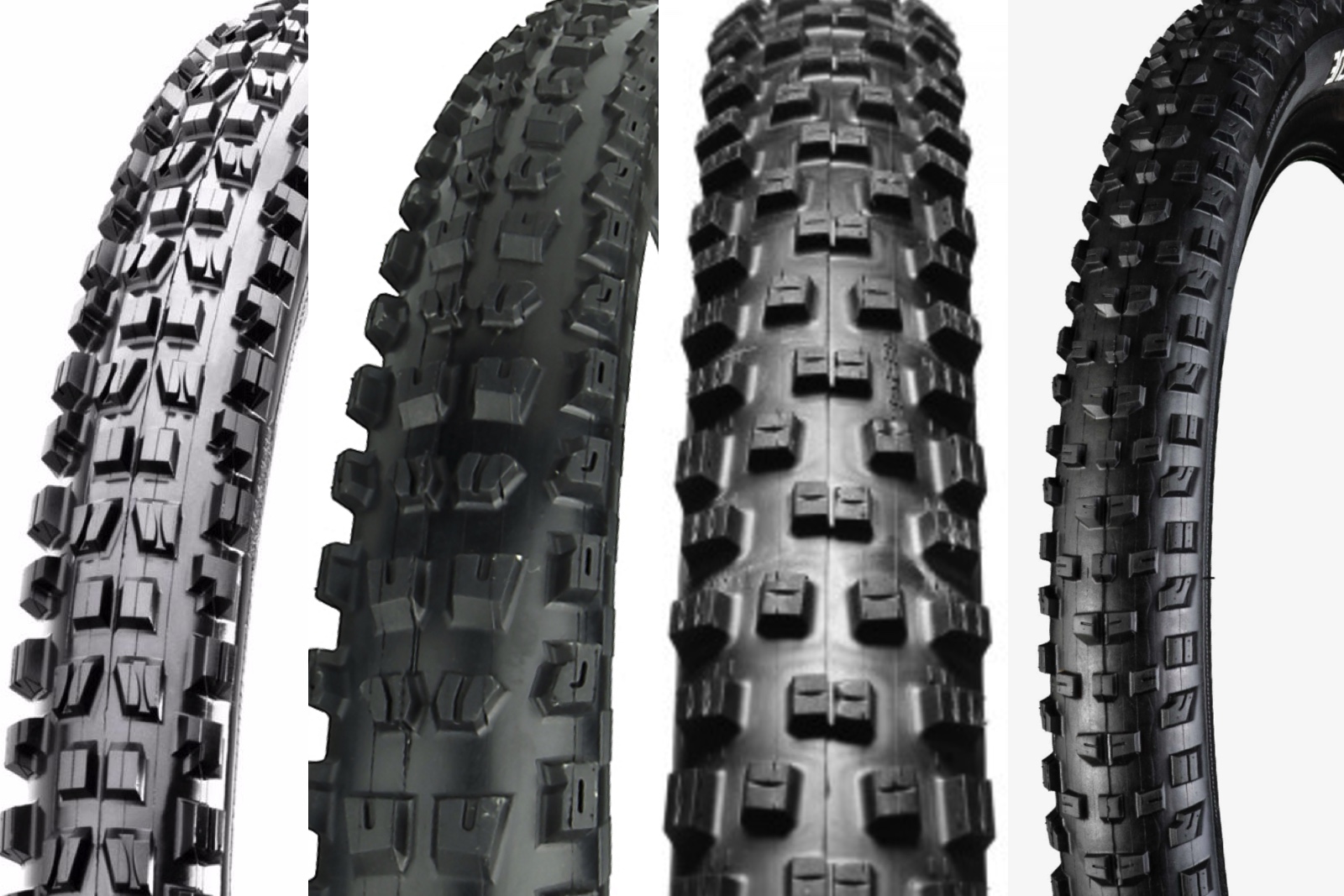 R to L : Maxxis Minion DHF, Specialized Butcher, Schwalbe Nobby Nic, Bontrager SE4. Most of these are classics and they’re all coming at you in wider than usual widths. But not quite “plus”…

Are these really coming?

First off we rode them back in July.  If you look at line items and drop down menus here,  here & here, you’ll see that they are listed as “out of stock” but are indeed coming from many of the major manufacturers. Those are links to the Specialized Butcher (which we’ve ridden), Maxxis DHF and Schwalbe Nobby Nic. They’re all headed our way in 2.5″, 2.6″ and 2.8″.

So what does this mean?

Well that’s kind of a loaded question.  For 27.5″ Plus bikes there are separate framesets to accommodate the taller, wider tires.  Because Plus tires sit so much taller, those frames can easily swap to 29″ wheels running normal width tires.  These new tires are meant to go into standard 27.5″ framesets.  That means two things :

1) Moving forward, frames will need to be designed for more tire clearance.

2) BB heights may also need to come down slightly.

As far as tire clearance is concerned, Boost was introduced in part to increase clearance while still maintaining shorter chainstays.  Because of this, frame designers should be able to work in some extra room for these tires on future bike models.  Unfortunately, the reality is that most bikes from 2016 and earlier won’t really be able to fit these tires…At least out back.  If you really wanted to, you could slap them into a 27.5″ Plus frame and have the BB dragging on the ground.  That brings us to the explanation of our second musing…

The pressure on brands to accommodate these tires will be substantial, and they will present a new set of challenges while trying to design frames that make everyone happy.  At least in regards to getting the BB heights just right.  Mainly because standard 27.5″ bikes will no be used with anything from a low volume 2.1″ mud tire to a high volume 2.6/2.8″ wide tire.  We don’t have the hard numbers, but there is a pretty substantial difference in height between those ends of the spectrum, possibly even up to a full inch. Therefore, a 2.2″ tire yields a very different bottom bracket height than a 2.8″ one does.  This could be the difference between finding that sweet spot in your cornering and ponder 155mm cranks because you are clipping your pedals on EVERYTHING.  In any case, it won’t be an easy task for frame manufacturers to satisfy everyone.  However, it won’t be quite as difficult for companies like Trek, Evil & Rocky Mountain and others who employ adjustable geometry and flip chips into their frames.

The most important question : WHY?

Having ridden these tires we can see the benefit for more than a few riders; depending on terrain and ability.  We don’t want to sound like snobs, but the general consensus from the editors at this website (and many others for that matter) is that 27.5″ Plus tires are for beginner level riders.  There’s nothing wrong with that; if they make it easier to coax new riders into the sport then we fully applaud them; that’s a good thing.  Plus tires take the edge off and they make it easier to ride uncertain terrain that new riders often find challenging or downright scary.  A good example would be off camber riding on mixed terrain with some roots sprinkled in.  That’s not to say that they can’t be ridden fast, but most fast riders (especially those who corner hard) will flat them, burp them and rip them right off the rims when they hit the right turn at the right speed.   Don’t believe us?  Find an EWS racer that chooses to run them on their bike and get back to us… Oh, did we mention that they’re terrifying in bike parks. And on any hardpack in general.  And on jumps. And in ruts. You get the point. 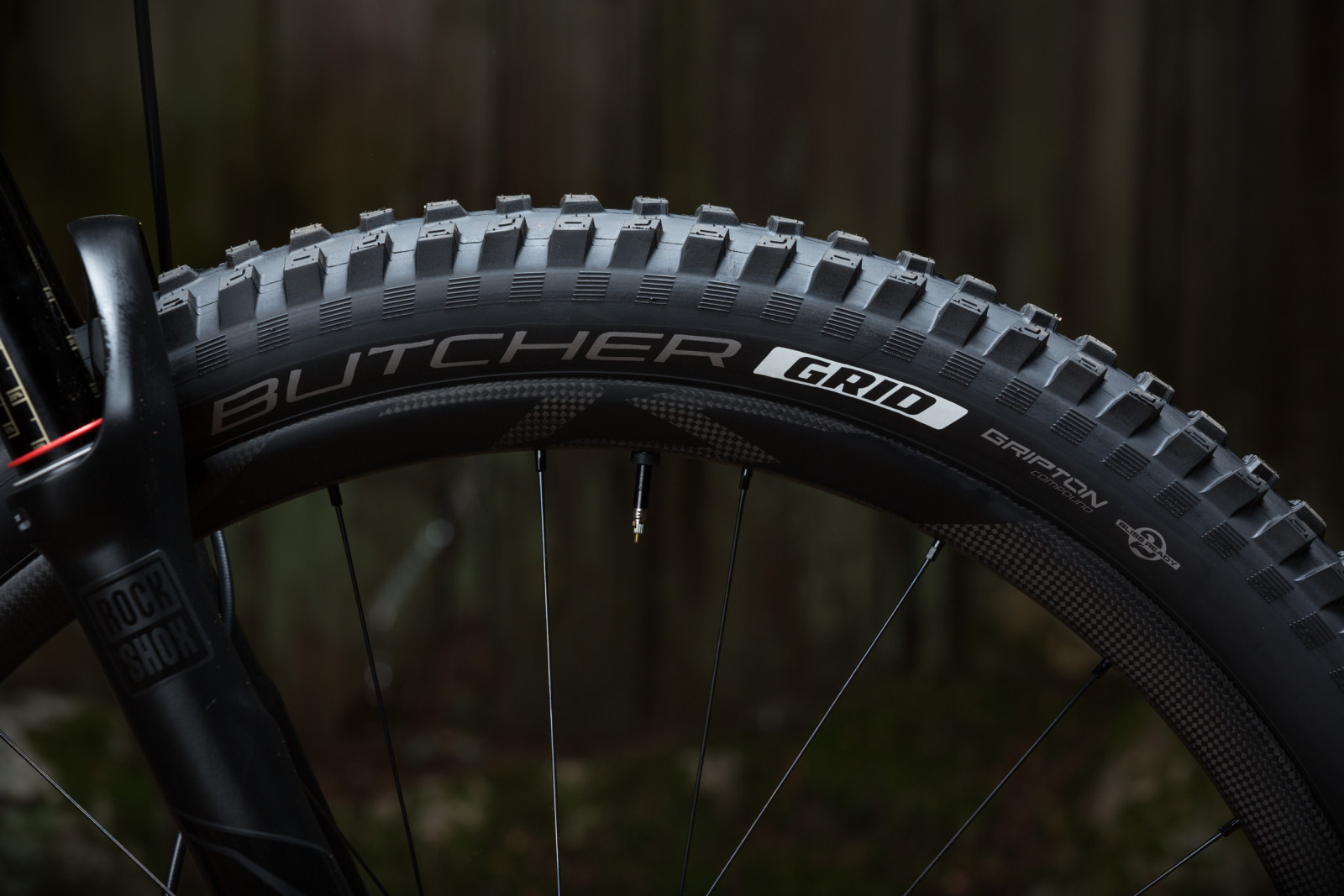 Anyhow, getting back to the “27.5” Not Quite” Plus tires… We rode a 27.5″ Specialized Butcher/Slaughter combo in 2.6″ width for two days in Canada on the Sunshine Coast.  The Butcher was designed by Sam Hill, it’s safe to consider it an iconic tire at this point.  The new 27.5″ X 2.6″ iteration of this tire has just been widened and had some volume added; it’s by no means a dumbed down tire for newbies with no R&D behind it.  Our first day on them was spent at Coast Gravity Park mainly riding hardpack, berms and jumps.  On our second day we rode them on undulating trails with rock slabs, roots, duffy moss and loamy chutes.  Sounds like a shitty couple of days, huh?

In the bike park, to our surprise they were actually pretty damn good.  We expected them to remind us of a 27.5″ Plus tire but they didn’t.  You wouldn’t want to really case a big jump on them as they were a little bouncier than a 2.3″ ish tire that you’d normally ride in a park, but after we found the right pressure they were great.  We’d still prefer a normal width tire, but after a few runs they were pretty close to an afterthought.

Once we took these tires to the dreamy terrain we mentioned before, that’s where they really shined.  We think this was also because it was foreign terrain. The added volume simply inspired more confidence to point and shoot.  When things got a bit hairy it was easier to just let off and go with the flow.  On most terrain you don’t really need that, but on the steep, loose & uncertain sections they were amazing.  This is largely due to the extra volume and gobs of traction.  We can think of countless places that we’ve ridden over the years where these tires would be great, but on our home trails they wouldn’t be our first choice.  The places that do come to mind are Whistler/Squamish and the East Coast of the US.  However – if you just ride groomed, hardpack trails then forget it, you probably don’t need them and certainly won’t appreciate the added rolling weight.  In any case, on the right terrain they truly are game changers.

Pretty much. There are zero reasons to stress out about whether or not your current frame will accept these new treads.  Tire manufacturers simply aren’t going to discontinue the normal 2.1″-2.4″ widths. There will be loads of offerings in all different casings and compounds at 2.4″, 2.5″, 2.6″, 2.7″ and 2.8″ widths.  We’re currently riding a fairly high volume Bontrager XR4 in a 2.4″ width. That tire will probably clear most 27.5″ trail bikes on the market (barely), and we can feel some of the same benefits we felt from the 2.6″ wide Butchers.  So you can probably still sort of join the party without having to buy a new frame.  This isn’t as disruptive as 15mm fork axles, tapered steerer tubes, boost or any of the bike industry’s other past attempts at ruining your life.

Our last point to ponder is this : Will the following year be the year that brands dabble with similar tire widths on 29″ bikes?  Probably…but you didn’t hear that from us.