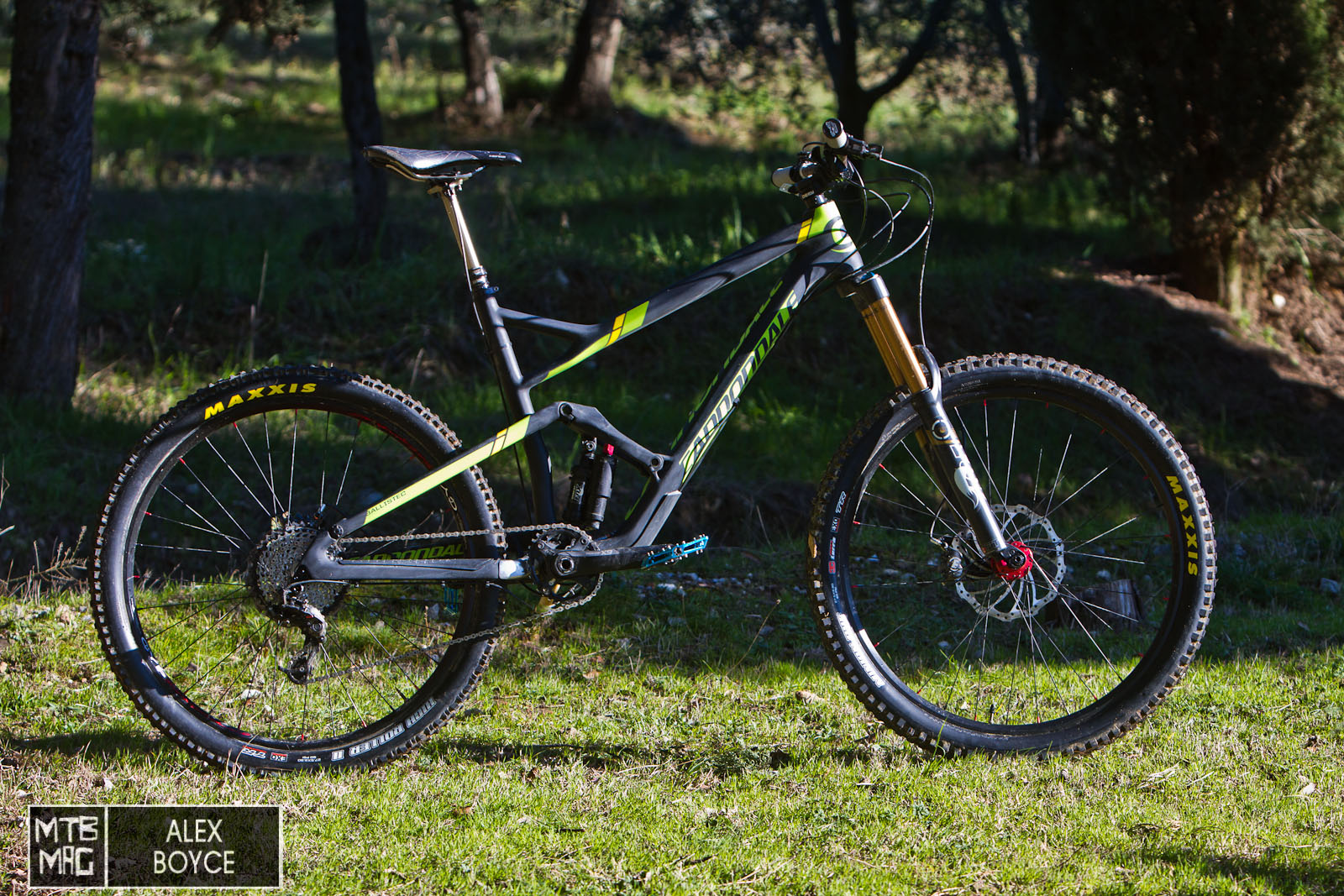 Cannondale a few months back sent us a large size carbon 27.5″ Jekyll frame kit as used and developed by 2013 Enduro World Series Champion Jerome Clementz. The idea behind just a frame kit was that we could build it up how we wanted and use the bike as the base for our testing this year. So far we have built the frame up with our first build and and now we have ridden the the bike a few times such that we can have a look at the first few points that became apparent about the bike after our first test sessions.

The bike is a constant work in progress, but we felt it was time after the first few rides to put down some first impressions about how it rides and what we need to do if we found any problems.

As always we have been testing the bike in the trails around Punta Ala in Tuscany, where the very first Enduro World series took place, it has proved to be an ideal test ground. We wrote down our first thoughts just after one of a first few rides before we even cleaned the bike. 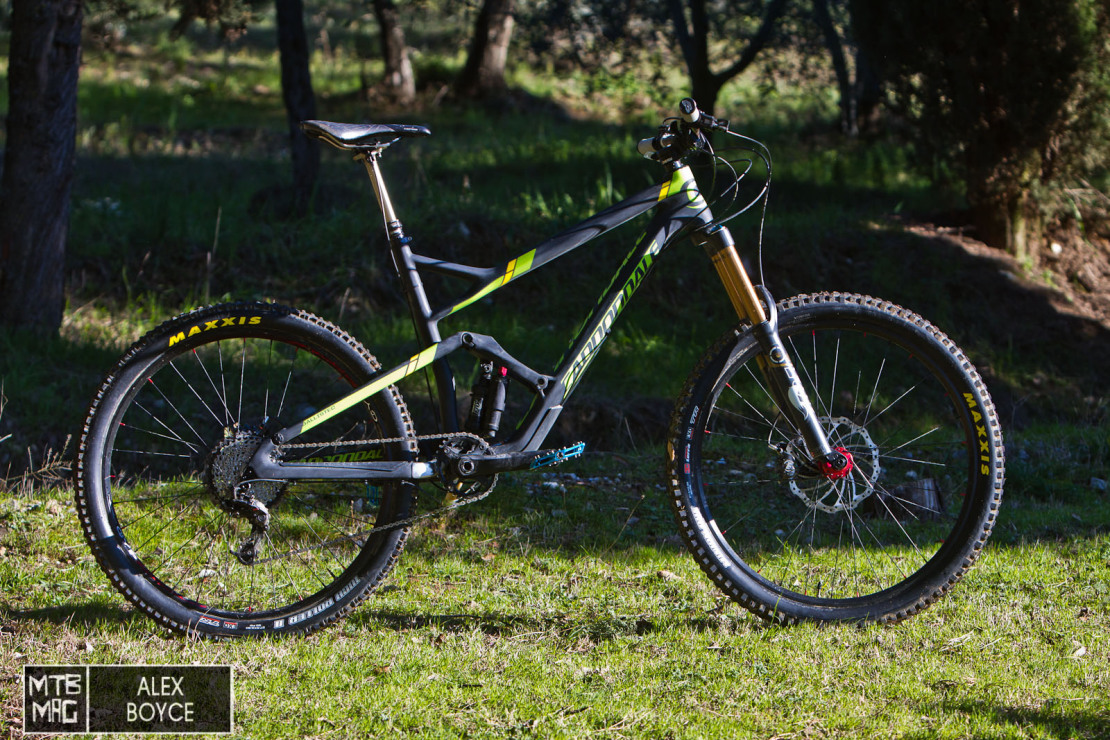 After a few test sessions, the Jekyll is beginning to bed in well and we have been able to identify what was good and bad about our first build.

To Recap The build

Chain Set
We opted for a 1 x 10 set-up to start things off, with an adapted 42T rear sprocket and Sram cassette. We did this before we move to the 2 x 10 setup that we intend to run on for a while in order to set some kind of baseline. At the same time as we did this we were handed an oval chain ring from Absolute Black to dry, with drop stop teeth.

So far our feelings have been that our drive system has been smooth and fully functional, no creaks, clanging or grating from the system, and the 42T adaptor has been working really well, without miss shifting. One feature we particular like is the oval 32T ring, which although we wont look at in detail, we feel has defiantly bought some smoothness to our pedalling.  We have not lost the chain and the ratio has felt right for the type of hills we have been climbing. All in all a good choice so far. 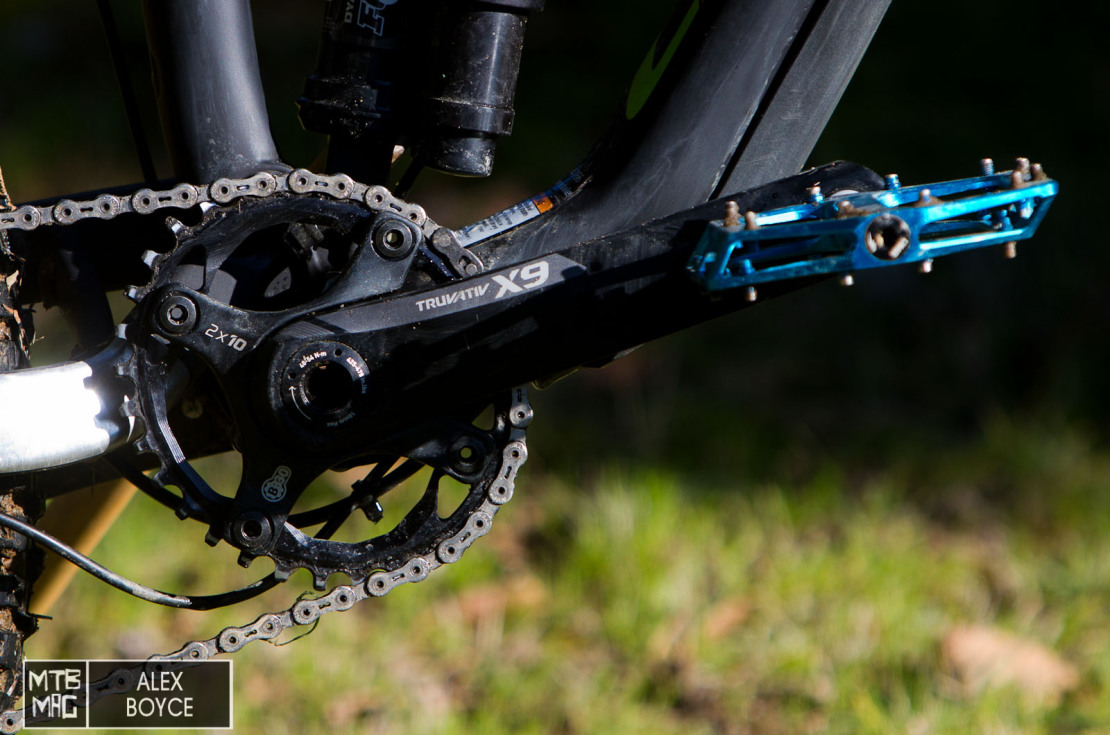 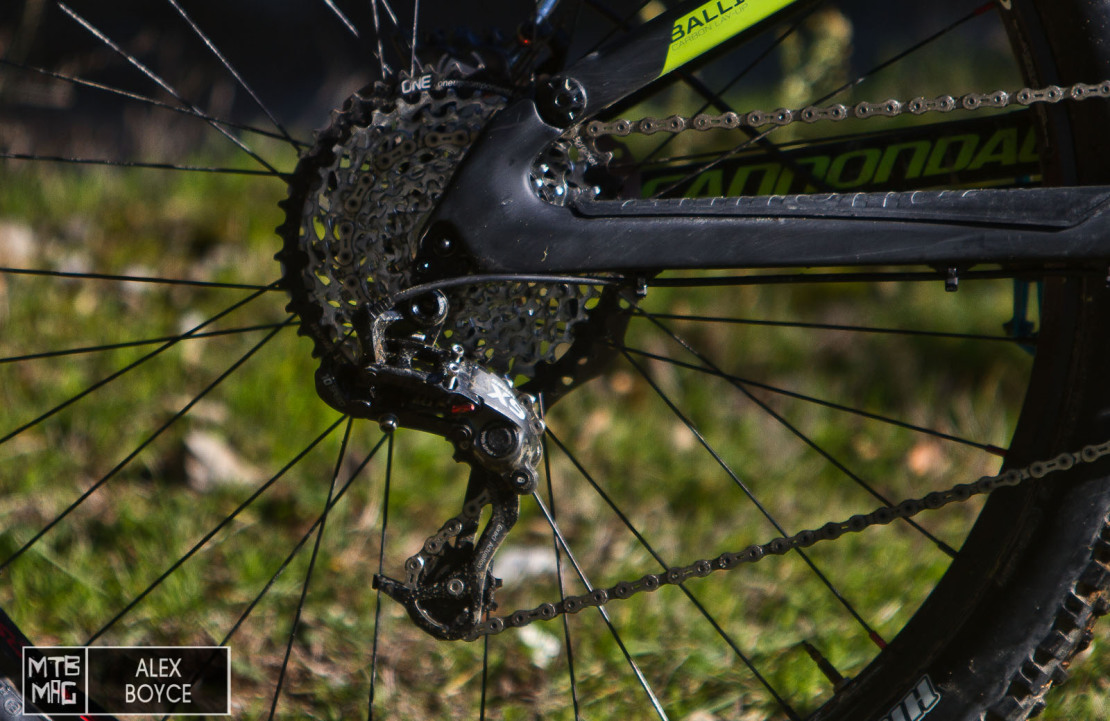 Contact Points
This includes our seats, and grips and controls which were all custom choices. Starting with the seatpost, we have been testing the Fox DOSS in order to evaluate how a newer version will be which is expected to be released at some point in the future.

Overall we found the bars quite wide, at 800mm, maybe too wide for our liking, but certainly comfortable for fast steering inputs. The main reason it is a little wide is that in narrow treelined trails we risked a few times clipping the bars on trees when cornering. Not ideal, but before we started to cut the bar down we wanted to see what was possible. The seat post was functional and we like the simple three positions which suited our height well on the large frame, although this system may not appeal to all, it has been working without fault. 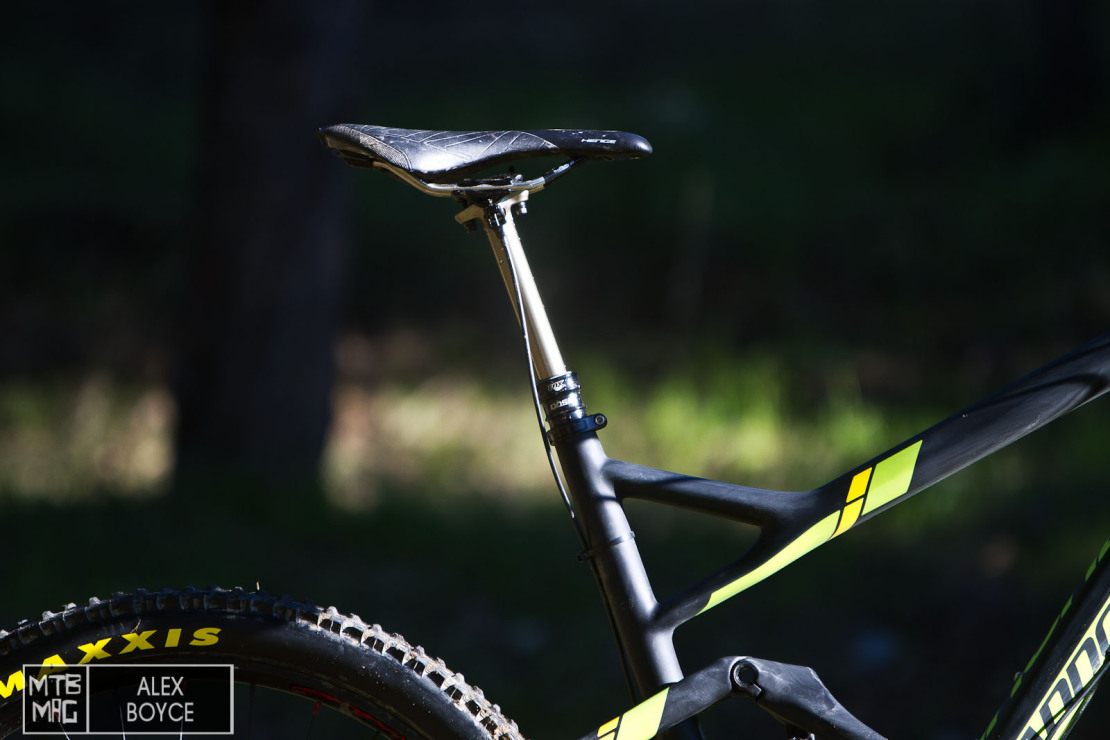 There is enough travel on the Doss post that we can run the collar very close against the frame.

We generally like a clutter free bar set-up, but in this case we had to use the remote for the rear shock, we initially set it up with a pull to lock out, which was pointed out to be incorrect, but then when we switched it back we actually preferred the original set-up we made as we can free the system with one tap and without moving our hands from the bars as much. We know Jerome uses an adapted grip shift, so watch this space on what we decide is the best method. 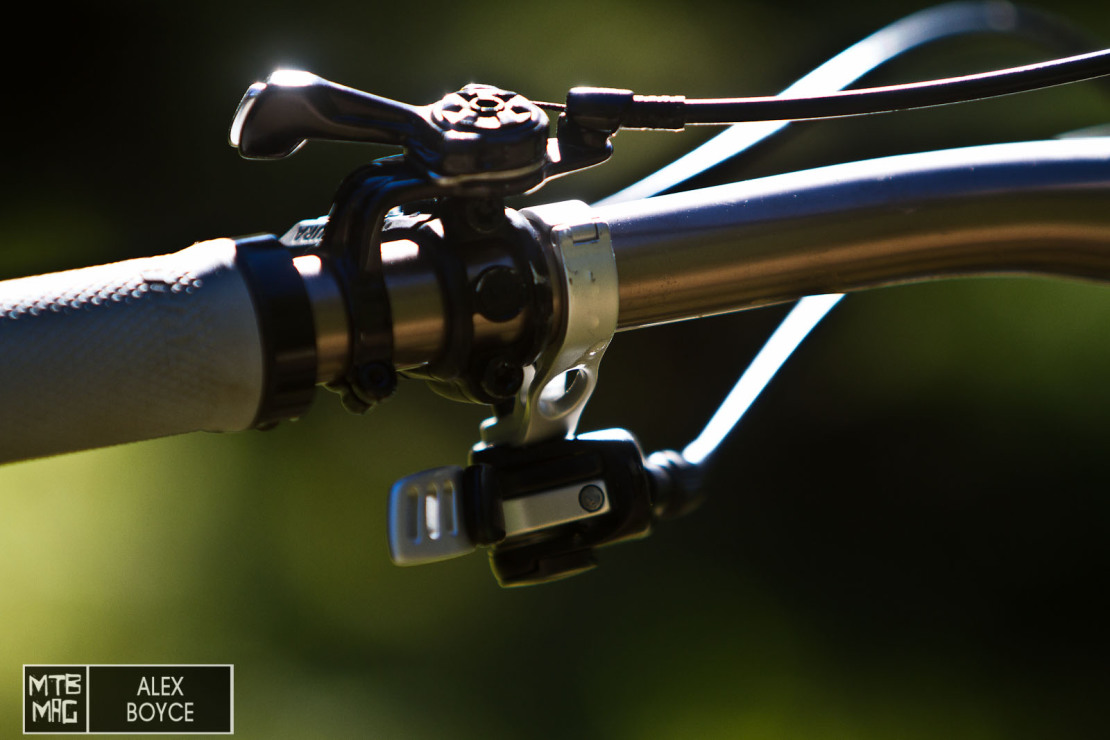 The left side of the bar is busy but functional. 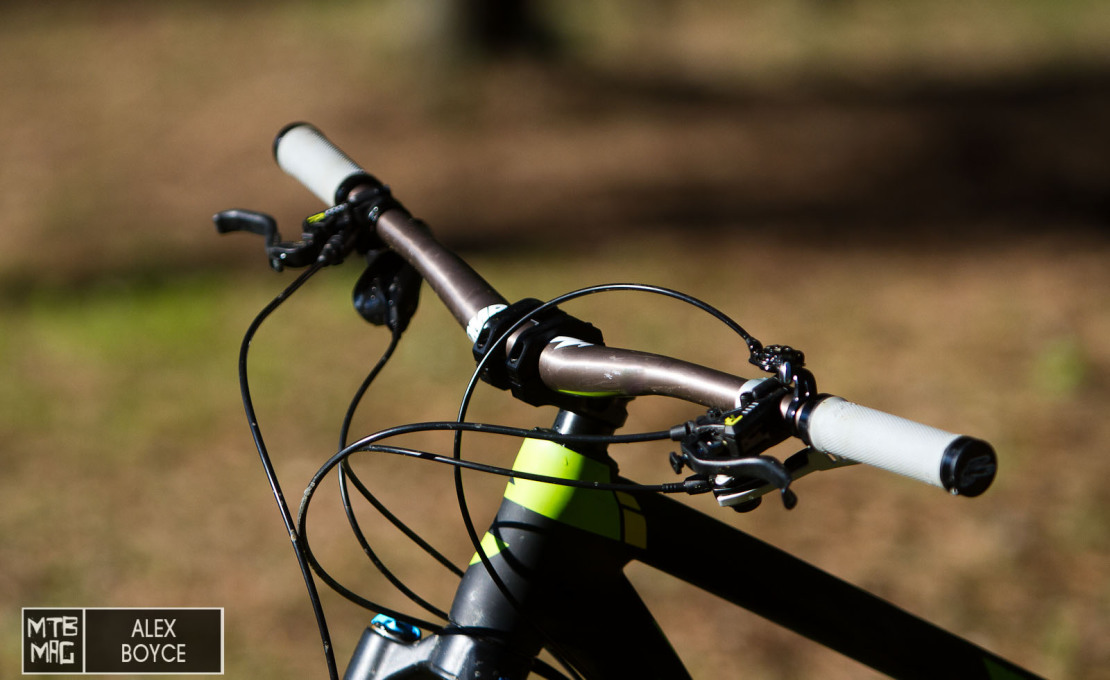 The bar is quite wide un-cut. we will be shortening it down a bit to 780mm, to see what difference it makes.

One of the key features of the Jekyll is it’s pull suspension shock system on the rear with essentially two travel settings which are adjusted by a lever. Not much is said about how it works in the press, we can say on first impressions it definitely works well, we like the lockout function. When riding it feels different to a standard shock system, a little bit more linear than what we have tried recently. We did note that we didn’t feel any clunk or harsh bottom out on the shock system, it was hard to know exactly when we reached the end of the travel. We did not touch anything on the rear shock apart from a few clicks of rebound on the long travel piston. The shock came set-up for our body weight according to the Cannondale charts. The rear end on the trail felt smooth and responsive, a surprise for us considering so few companies use this type of system and our experience with it is limited.

The fork we have on the bike is a custom Talas from Fox. The cartridge is certainly not standard, has mid travel support, but we have had to spend some time setting it up with pressures to balance the rear shocks as we found on some sections a bit too much give on the front as with a 30 percent sag we found our front end running a bit low and not lifting us out of multiple rock holes as well as we could have. Slowing the rear rebound and reducing the sag to 20 percent on the front we noted a big improvement in suspension balance between front and rear and increased bike stability in the rough stuff. We need a bit more time to see if any further improvements can be made so the front end compliments the back end. We certainly though enjoyed the responsiveness and fluidity of the fork and it’s “RAD,” style internals. 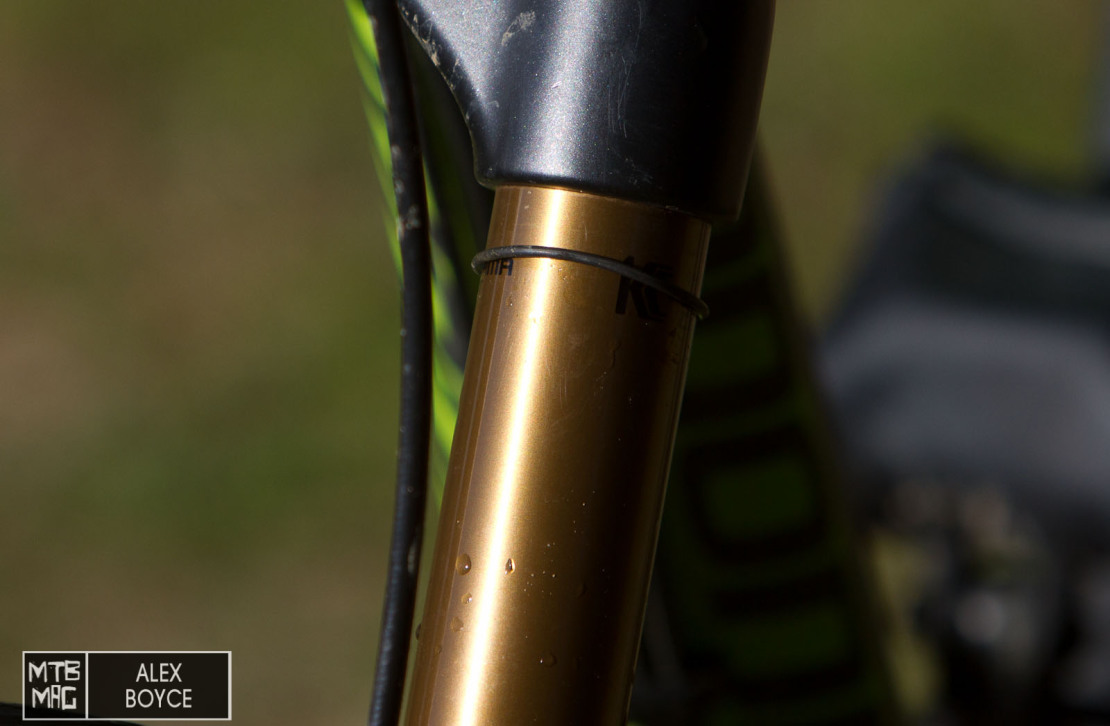 Almost reaching the end of the fork’s travel. The DYAD system is exclusive to Cannondale.

We have a range of brakes to test currently and we started off with the Magura MT7 4 piston system which has been excellent so far in normal conditions. The feel at the handle is very similar to the Shimano Zee system we have been using previously. We did note that when starting to heat the brakes the bite that the Zee brakes with ICE tech discs retains was not a s present with the Magura system, we speculate that it has a lot to do with the discs Shimano uses and their extreme heat dissipation characteristics. The Magura’s felt just as powerful though and never left us wondering if we could stop.

We noticed that on the hose set-up we needed to rotate the brake hose calliper connectors somewhat (around 20 degrees), as the standard out of the box cable run angles were a little tight when mounted on the Cannondale which means afterwards the system required a quick bleed through. Not a problem in general terms when there is plenty of cable run through the bike but worth noting for future set-ups. This had us checking quite a few other bikes and we realised their are many bikes out there with incorrectly positioned cable positions on callipers. The standard cable exit out of the calliper was a little too sharp, so we rotated the housing after our first run once we had picked up on it after our first ride/shake down. It was interesting that Magura supplied the callipers in this position, they were probably set for another bike cable run style. Not quite plug and play and underlined why a custom set-up needs a shake down to get it right. 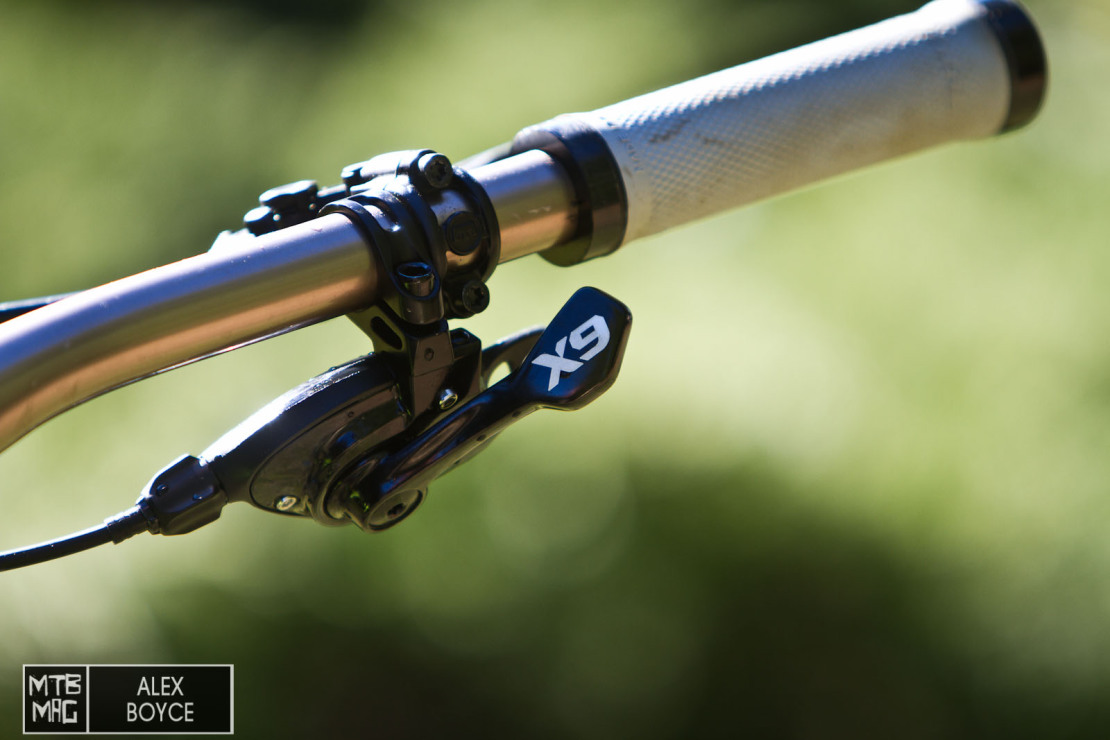 The X9 shifer and MT7 lever fitted well together on the bar. 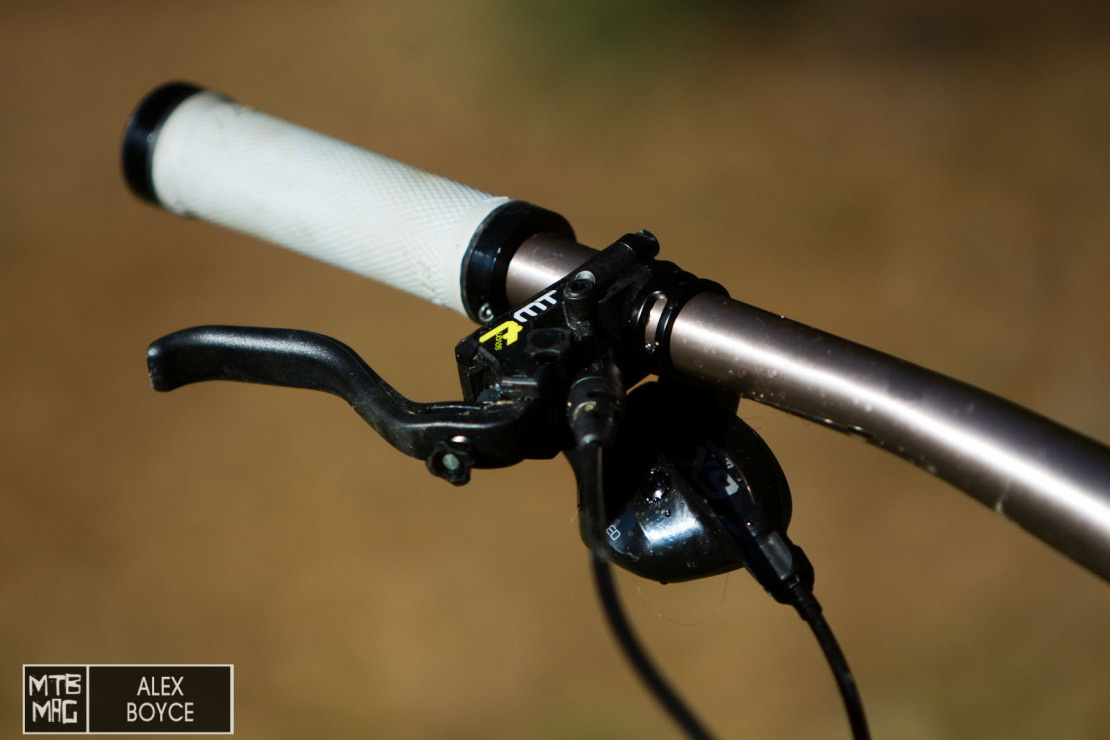 The adjustment knobs gave us enough range that we felt we could find a comfortable position on the lever hat matched our style of riding.

Our wheel set was faultless on the first runs, and despite the wetter conditions the tyres gripped well and there was excellent mud clearance on the different parts of the frame. We didn’t feel we had enough time on the bike to comment more than this at the moment. We need some rougher runs on trails like Rock-OH in Punta Ala before we are able to comment further on their functionality with the Jekyll. We really like the Minion and Maxxis High Roller 2 tyres, they grip well and have become the standard for Enduro and 27.5″ wheels front and rear.

Without drawing any big conclusions to how the bike performs at this point with this set-up, we can only comment and say that this bike feels and rides like a fast Enduro bike. The Jekyll floated well over the rough stuff, was responsive when pedalling and cornered well. We like the longer front centre that we did not have before on our previous 26″ bike and  can comment that the Jekyll has all the modern design elements that have come out from Enduro racing over the last few years.

Our set-up definitely verges on the harder Enduro side of the bargain with our build weight being an ideal compromise between weight and  strength. With the bike covered in quality components our on the trail use so far was spritely and precise. The bike responding to our inputs as and when required. We liked the rear shock lock out and think that it should be a standard on Enduro race bikes, as it definitely allows the rider to focus on sprinting up short climbs, minimising energy loss. We were not sure about the top lever for controlling it though on this bike, we want to try Jerome’s method with a grip shifter.

Climbing and descending abilities on first impressions are a good compromise when looking at the possible uses this bike can be put to. The stability of the bike at speed was without question great and cornering was stable, but we need more time to learn where the sweet spots with our body position are. With out saying much more due to limited ride time we can say that for our test bike we have a well balanced professional feeling bike. 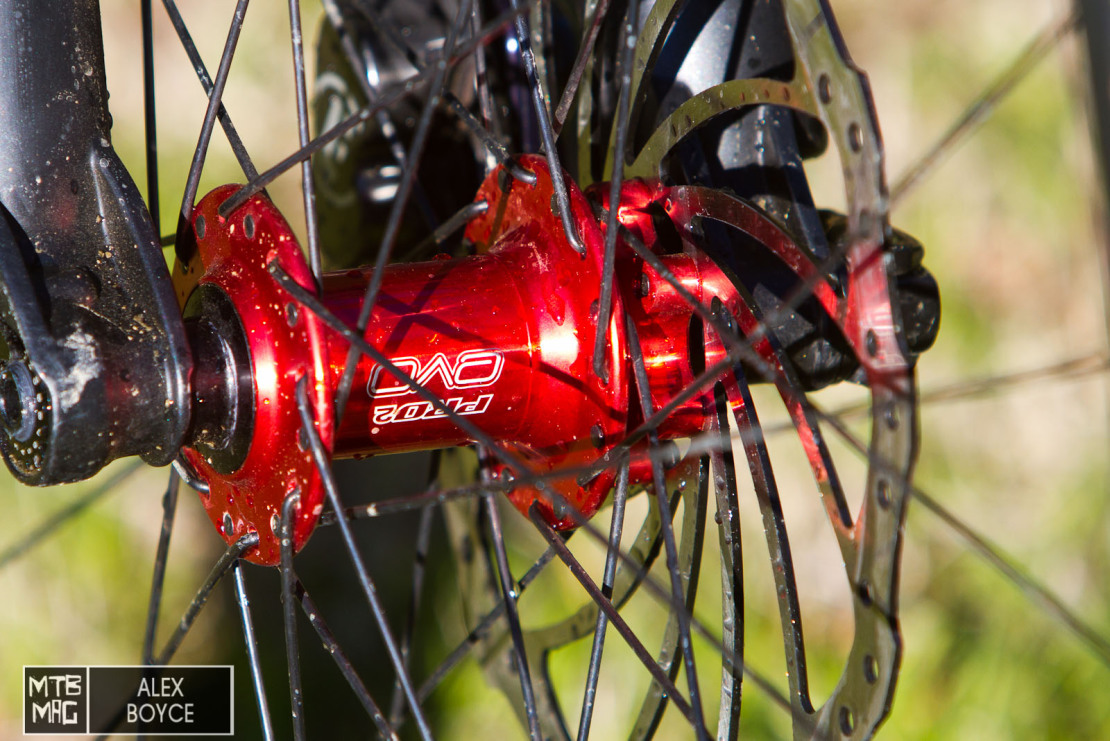 The Hope Evo hubs were great and just rolled really well. We like the click on the rear hub. 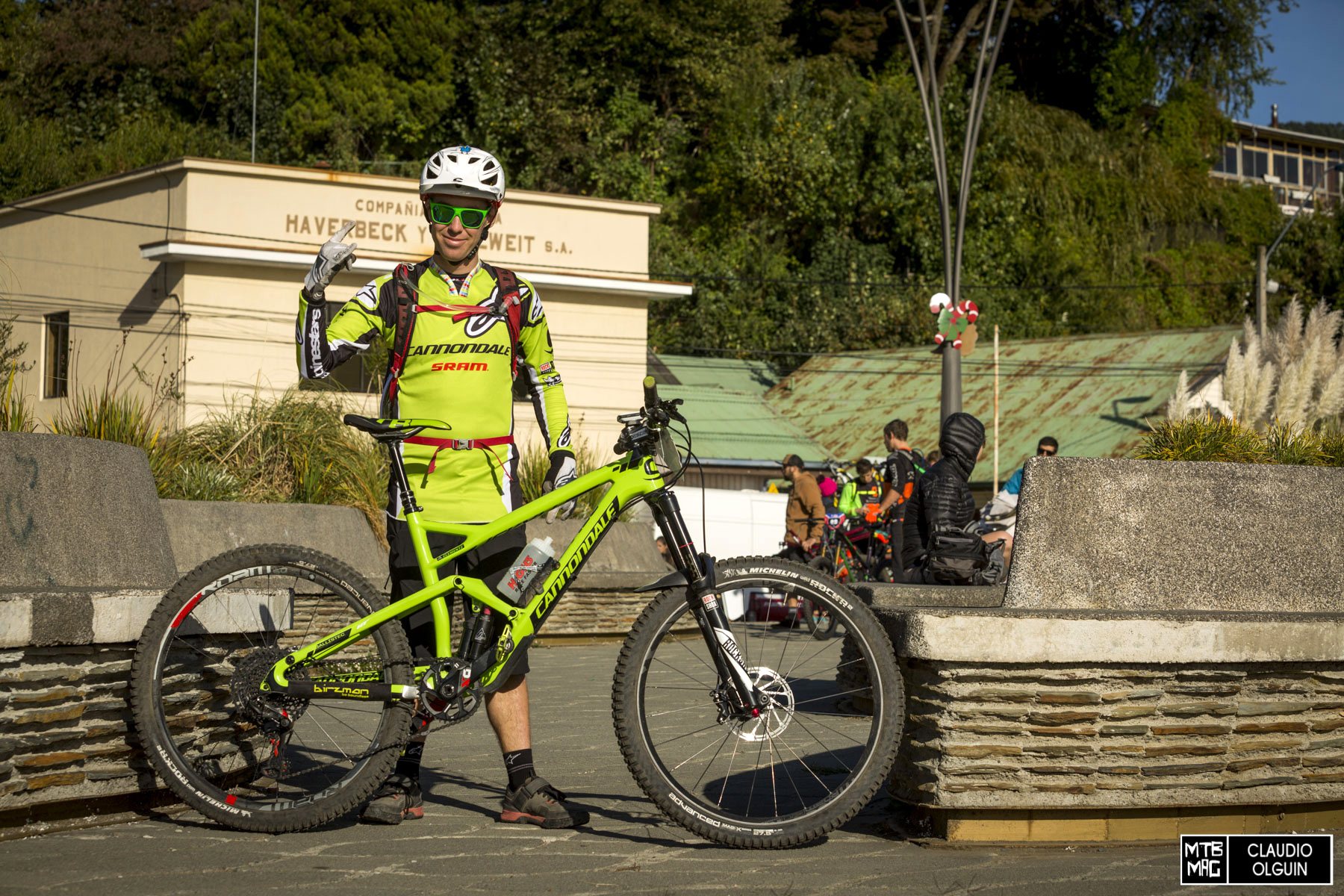