A few years back, Evil Bikes opened my eyes with a new approach to big wheels. At the time, I hadn’t ridden a 29 inch wheeled mountain bike that was even remotely close to being in the realm of being something that I considered fun to ride. Even stranger was that (at the time) Evil was the last brand you’d ever expect to brand a short travel, big wheeled machine as the next big thing. Lo and behold, with radically aggressive geometry at the time, the 120mm “Following” took the MTB world by storm…But something was tugging at me – I thought, what if it had just a little bit more? I chatted with Evil Bikes’ owner Kevin Walsh, and told him that the next iteration of the bike HAD to be 130mm and a piggyback shock. When he told me he wanted the bike to retain its original character and wouldn’t pick up any travel I was a bit bummed and still curious how something like that would ride. Then, he told me The Offering was on the way… 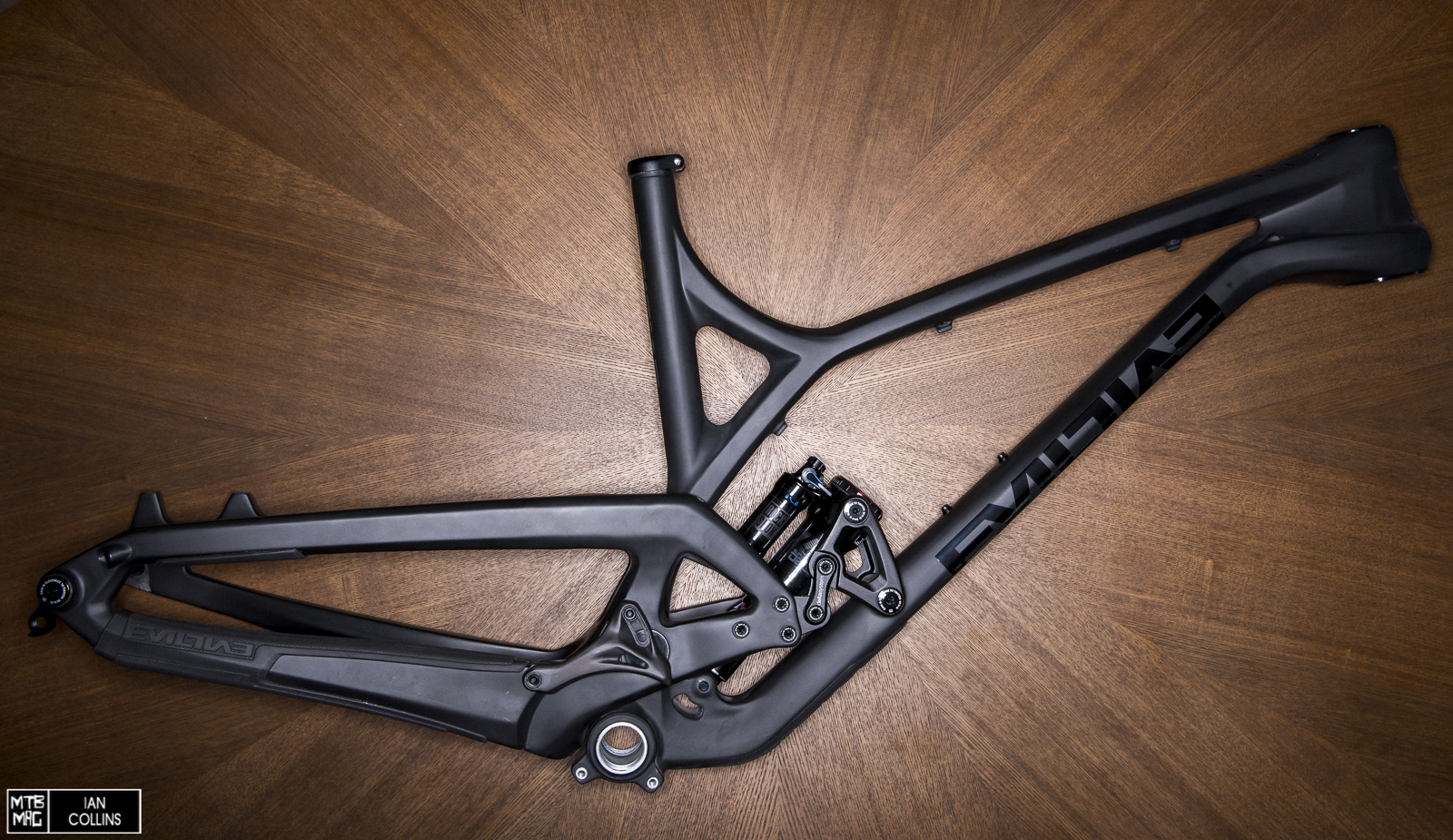 This is where it all starts…In terms of duty, The Offering falls between The Following and The Wreckoning travel wise, but this frame picks up top tube length and sees a steeper seat angle (Hallelujah!) for an improved climbing position. In my opinion, Dave Weagle has always nailed the kinematics on Evil’s bikes and that, in combination with a finely tuned carbon layup, cutting edge geometry and brilliant features has always put Evil toward the top of my list. The Offering is no exception; here we go… 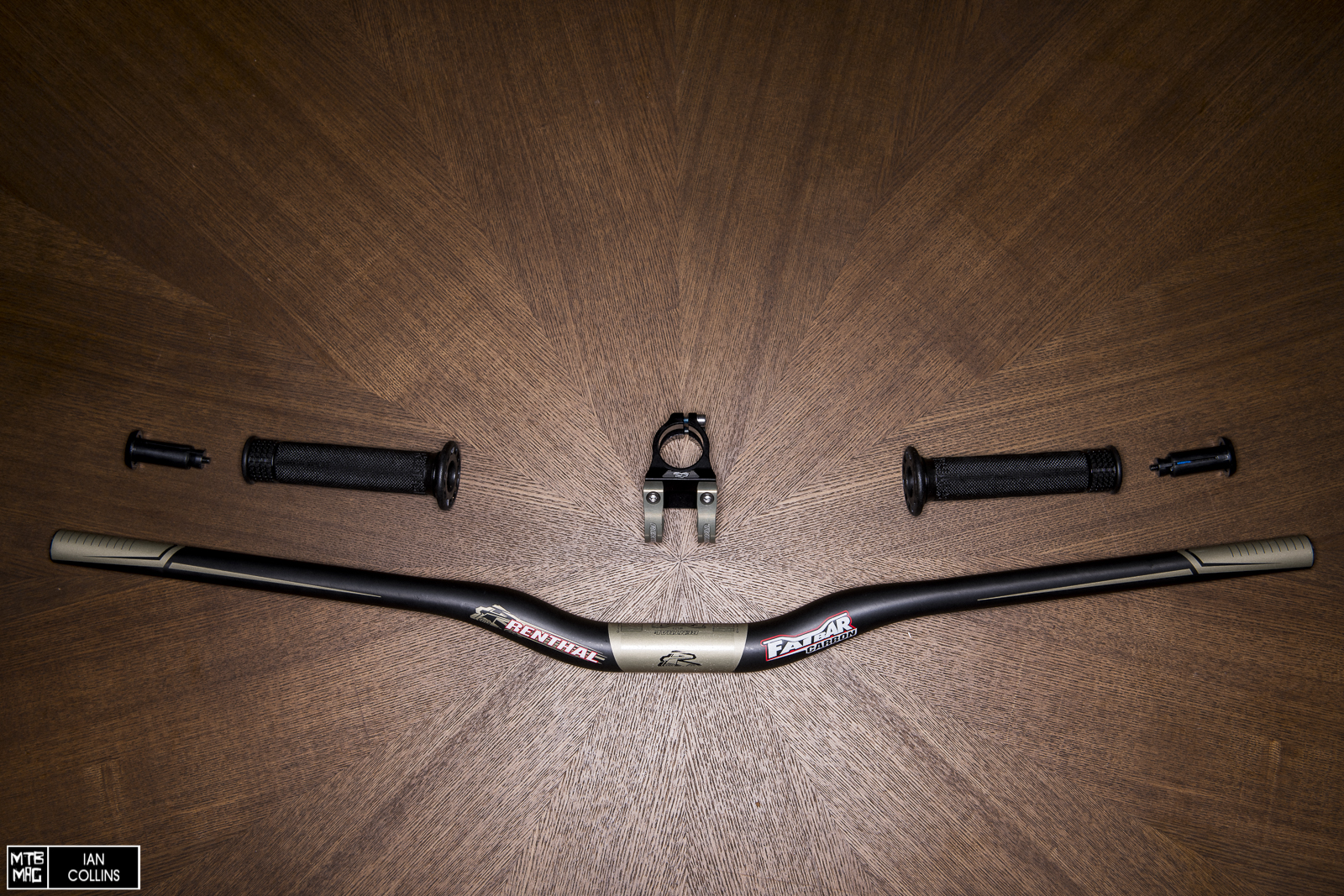 I’ve always gotten along well with Renthal’s cockpit parts. I opted for their 30mm rise Fatbar Carbon handlebar, especially now that it has a full 800mm width in the more comfortable 31.8mm version. Their Apex stem features a 40mm length and a 6º rise. Rounding it all off, I’m a huge fan of their “Ultra Tacky” push-on grips – they’re freakishly comfortable and grabby. 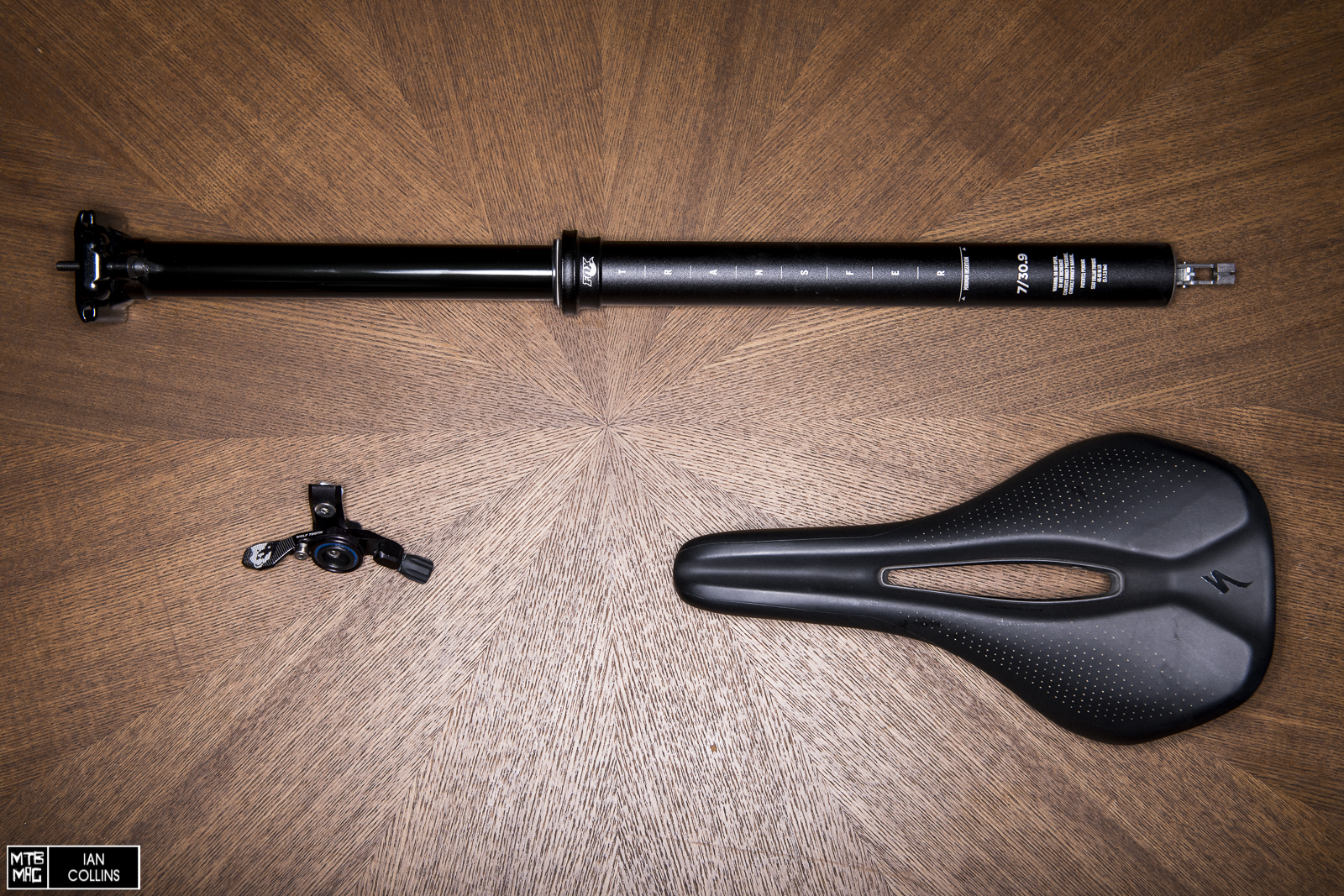 Rounding off the cockpit parts, I was stoked to hear that Fox finally added some travel to their excellent Transfer Performance seatpost. Aside from its reliability and lack of play, I’ve always liked that you can control the return speed at the lever, giving it a very intuitive feel. The Transfer is operated a Wolf Tooth lever, which in my opinion is by far the best out there. It has a knurled paddle, rolls on a big cartridge bearing, can be adjusted inboard/outbard and even has a breakaway feature. Last but not least is the Specialized Phenom Saddle. For me, it’s perfect – offering up just the right balance between contour, shape, relief and dense padding. 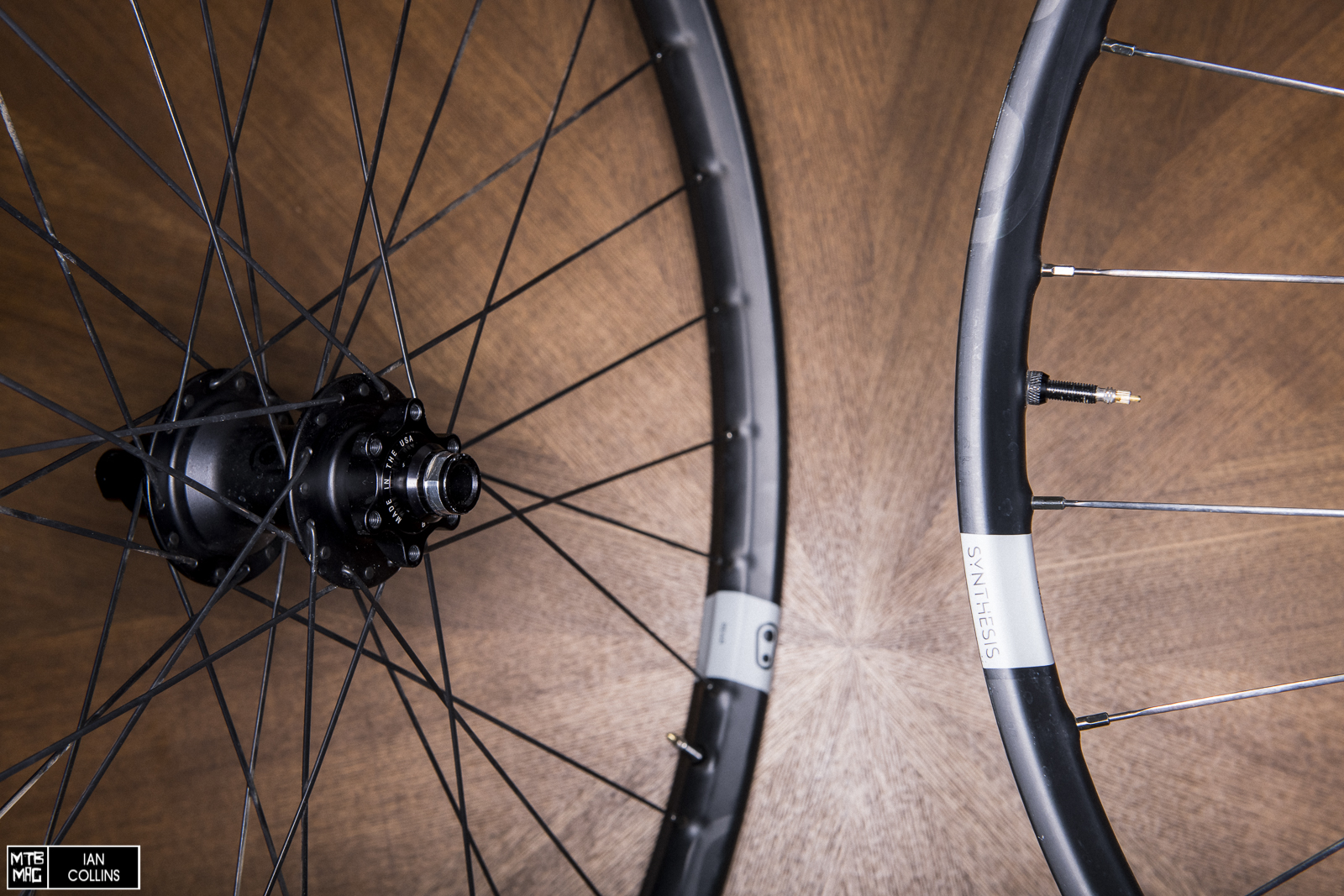 When it comes to wheels, not everything impresses me – at least in terms of feel anyway. Crank Brothers have had a rough go for a few years in the past, but they’ve turned it around recently. Their newest dropper seatpost has been well received, but what’s really floored me is their new Synthesis wheel line. The E11 version that I chose features a 28 spoke count up front and a 32 spoke count out back, as part of what crankbros call their “tuned carbon wheel system” – an effort to focus on how front and rear wheels should feel, based on what they’re doing below you – on trail. It doesn’t stop there though – the spoke diameters vary front to back, as does the rim construction. Up front, the inner diameter is 31.5mm to better support wider tires. Out back, the inner diameter is 29.5mm and sides of the rim are thicker, to better manage impacts where they’ll more frequently occur. Another rad feature are the Project 321 hubs, which feature low drag magnetic pawls and blazing fast engagement – as bit of a bonus, they’re made in Bend, Oregon. My Synthesis E11 wheelset weighed in at 1839 grams with tape and valves. While after recently riding it, I’m really lusting after Eagle AXS, but it won’t be available for mortals for another month or so. For the meantime, I’ve gone mainly with SRAM Eagle XO1 bits, but chose an XX1 shifter as I think it has a crisper feel. Overall, since its launch, I’ve been a huge fan of Eagle’s surprisingly crisp shifts and massive range, via their giant 10-50T cassette. I’ll be running a 30T X-Sync chainring most of the time. Like many others who raced downhill on the East Coast back in the day, I used to run Profile 3-piece cranks, despite their heavy weight. When Cane Creek released their hollow titanium eeWings, I knew I had to have a set. They look like a cleaned up Profile crankset, but at less than half the weight. At $999 they aren’t cheap, but with a fairly standard (and burly) 30mm spindle, I have a feeling that they are the type of part that’s a good investment which can carry over bike-to-bike for years. The svelte design tightens up with a single 10mm bolt and features a single aluminum lockring for adjusting BB tension. The eeWings are backed by a 10 year warranty, come in at just 400 grams and are 20-30% stiffer than premium carbon fiber offerings. Since the Offering is quite low at the BB, I chose them in a 170mm length. For quite some time a few years back, the Chris King bottom bracket was folklore to many. Like Sasquatch or the Abominable Snowman, no one was sure if it existed, or ever would. Rumors of its development swirled for ages and frustrated consumers were yearning for a BB as durable as a King headset. Fast forward a few years and they’re in full swing with their legendary in-house made bearings and a 5 year warranty. I chose the Threadfit 30 as it mates with the Cane Creek eeWings seamlessly. At last…I’m finally riding a King BB! For quite some time I was plenty happy with SRAM Guide brakes on my trail bikes, but on more aggressive bikes, particularly with bigger wheels (which require more stopping power) I opt for Codes. I swapped the metallic pads for organic ones and run the old G2 rotors. Call me crazy, but that’s just the setup I prefer. The Codes have 4 pistons, loads of adjustability and all the power, consistency and modulation I want from a brake. The new Time ATAC Speciale pedals have been phenomenal for me, but bear in mind, I’m quite partial to Time’s engagement system and feel. The Speciale is beautifully made and unlike their past ATAC models, they feature adjustable tension and four adjustable traction screws per side. I snuck in some titanium bits because…what the hell – it’s a dream bike! I chose Control Tech’s slick “Timania” seatpost clamp and Silca‘s Sicuro water bottle cage. Silca’s mounting holes are extra long, so on the Offering, it can be slammed down toward the rear shock to make room a full sized waterbottle. Oh…it even comes with ti hardware! The Specialized SWAT CC headtube tool is pure genius. It features a discrete multi tool that stashes into your steerer, but also doubles as a headlock and triples as a chain tool, which even houses a spare chain link. I chose a 150mm travel, 42mm offset RockShox Lyrik up front to start with. Throughout my testing of the Offering, I’ll be dabbling with 140mm of travel and a standard 51mm offset as well. I’m not 100% sure what to expect from the different offsets, but I do know that get along vert well with the Lyrik. It’s plenty stiff, has just the right range of usable adjustments and is freakishly supple. The fork is rounded off with a Wolftooth Axle, which is just a bit burlier than stock, and features a built in washer. It’s no secret that I’m a huge fan of the Schwalbe Magic Mary, so I chose that tire up front. Magics are one of the few tires that I find performs incredibly in both loose, soft conditions AND firm hardpack. That said, I wanted to keep this bike a bit on the lighter, faster rolling side, so I opted for a Hans Dampf at the rear wheel as the updated version has been great in my testing. Out of all of Schwalbe’s new Addix compounds, I prefer the feel of the standard “Soft” compound best.

**A big thanks is due to everyone who helped me get this bike rolling. Stay tuned for long term reviews on the frameset, crankset, bottom bracket, wheelset and more…**