Just about one month ago we had an opportunity to spend 2 days shredding with Trek up in Squamish British Columbia aboard both the new Remedy 9.9 Race Shop Limited and the new Fuel EX 9.9.  We spent a full day aboard each bike in varying conditions ranging from fun, flowy and jumpy trails to undulating singletrack with techy climbs and offbeat descents.  We saw a mix of rocks, roots, loam and groomed trails.  In a short couple of days we got quite a bit of saddle time, and a large portion of it was spent in rainy conditions; something we warmly welcome.   We rode both bikes in a size 19.5″ and opted to rally on the Fuel EX with 29″ wheels as opposed to the 27.5″ plus option.

Both bikes feature a geometry set that’s inching away from conservative and getting a bit more aggressive.  With that in mind, since Trek incorporates the Mino-Link on both bikes, they could be ridden in the high position with slightly reduced travel up front in order to take on a more conservative attitude.  This could suit riders looking to spend more time on terrain that isn’t as rowdy and value climbing prowess over descending capability.

Perhaps the biggest talking point with both frames is the Knock Block; a built in steering stop.  Trek incorporated this because they wanted to utilize a larger, straighter downtube.  Basically a few custom headset parts and a chip built into the frame prevent the fork crown from hitting the downtube.  Yes it can be used with non-Bontrager stems, and yes the downtube has a rubber bumper to protect the frame in case things get really ugly.  We didn’t notice this feature once on the trail and unless you’re doing X-ups on a regular basis, you won’t notice either.  In fact, you might like it because in the event of a crash, your brake hoses are far less prone to cracking and leaking in the event of a crash. 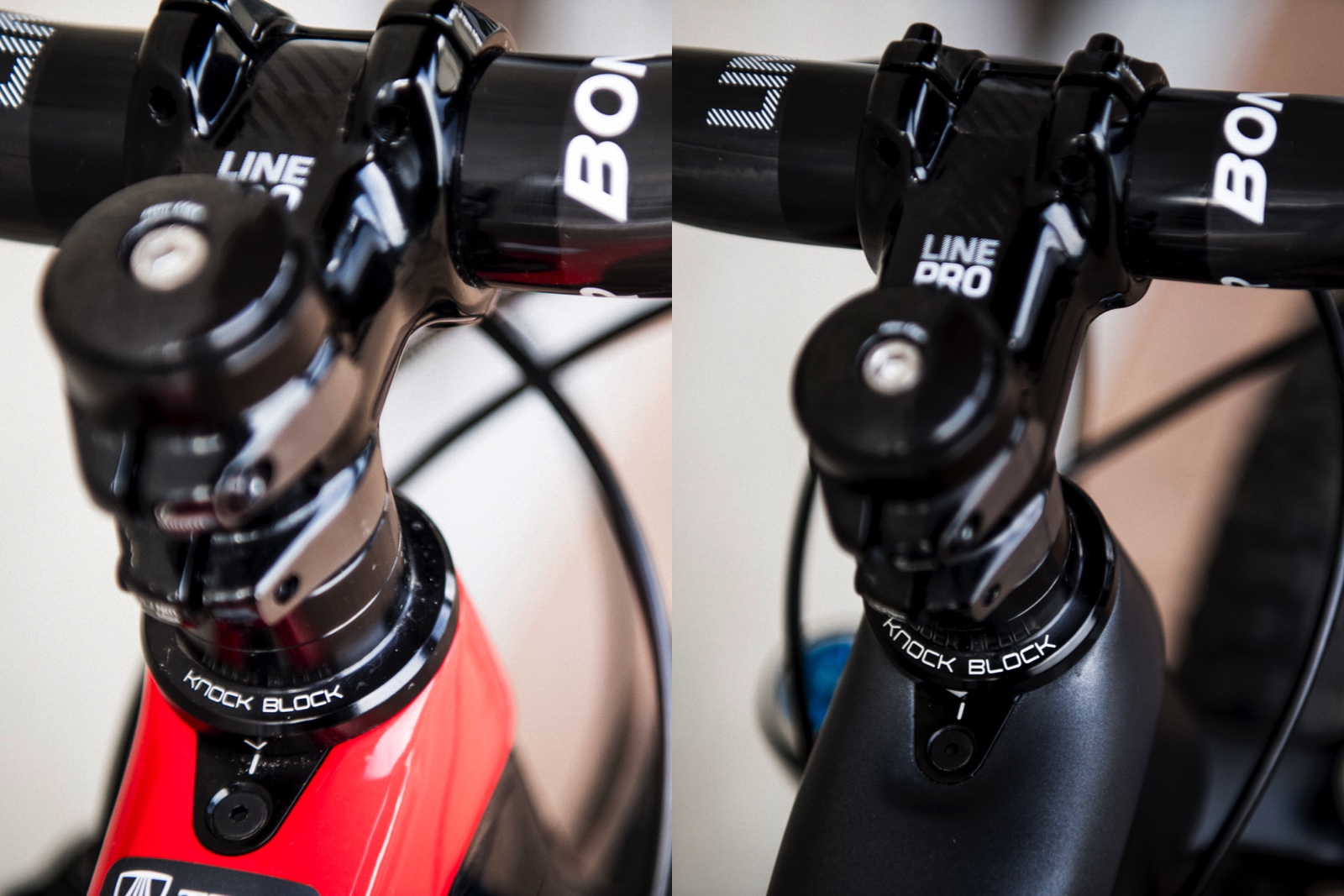 Overall, aside from the Knock Block, both bikes boast some brilliant features that we’ve grown accustomed to from Trek.  First off, the Mino-Link provides adjustable BB height/Head tube angles with some minor affects on reach and seat tube angles.

A super dialed internal cable routing and nicely placed frame protection are bonuses that we’ve come to expect from Trek.  Shown on the top left above, there is even a port in the downtube that allows you to zip tie the cable/hose to the downtube to prevent it from rattling. 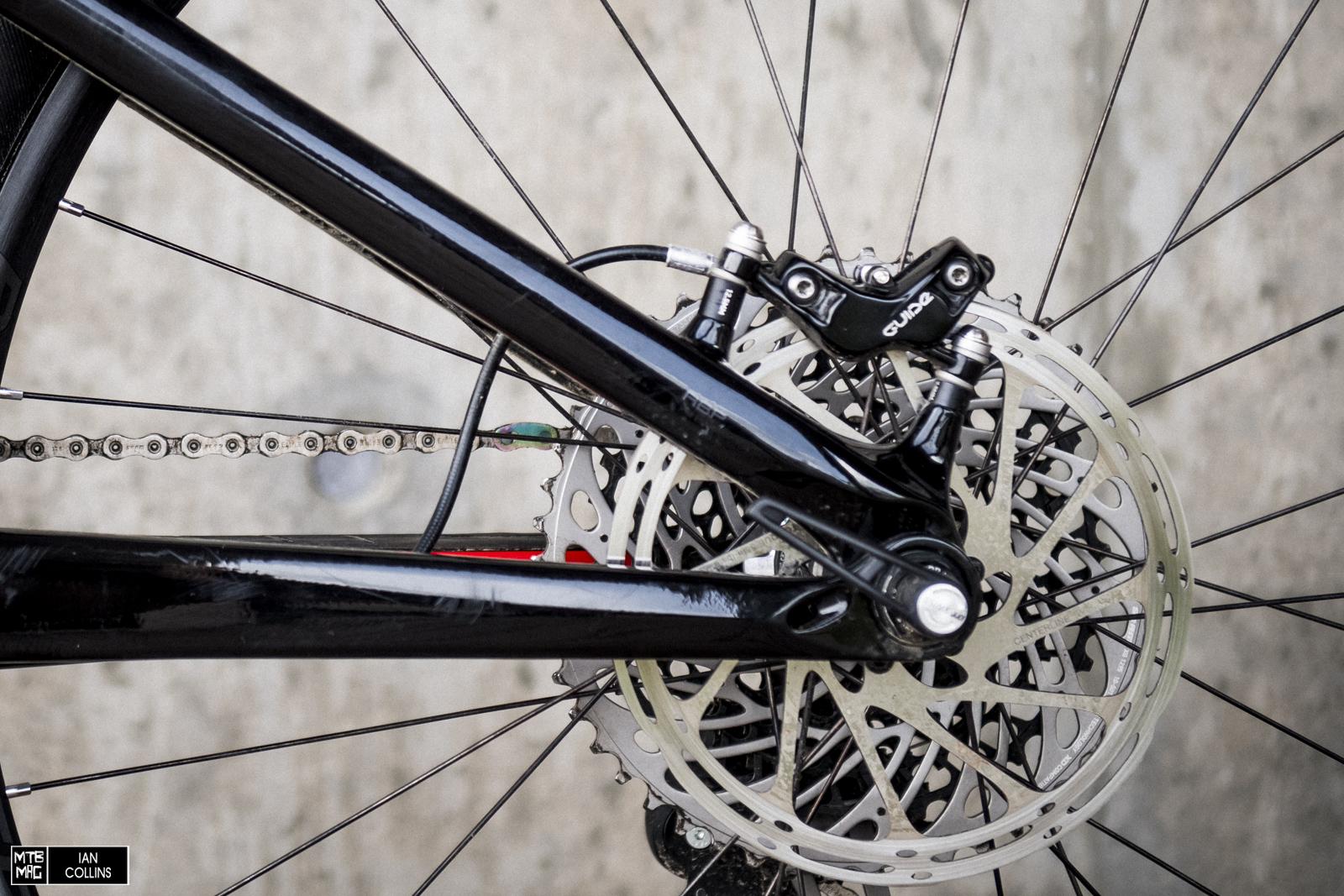 A design element from Trek that is commonly overlooked is ABP(advanced braking pivot); a key pivot in the suspension layout which is concentric to the rear axle.  This means that the bike utilizes a simple 4-bar linkage but unlike many other 4-bar designs, it’s completely neutral under braking forces.  In general, we think ABP has a very positive effect on the suspension compliance as well.  The Trek bikes that we’ve tested in the past have proven to perform incredibly in the roughest part of the trails we’ve ridden.

Both bikes had a very similar parts package.  The glaring differences being suspension and the Fuel with its Carbon Fiber DT Swiss wheelset over the aluminum Bontrager wheels featured on the Remedy.  The Bontrager dropper post and a really solid Line Pro 35mm cockpit is featured on both bikes as well.  Although our ride time was limited, first impressions on their new house brand bits were really good. 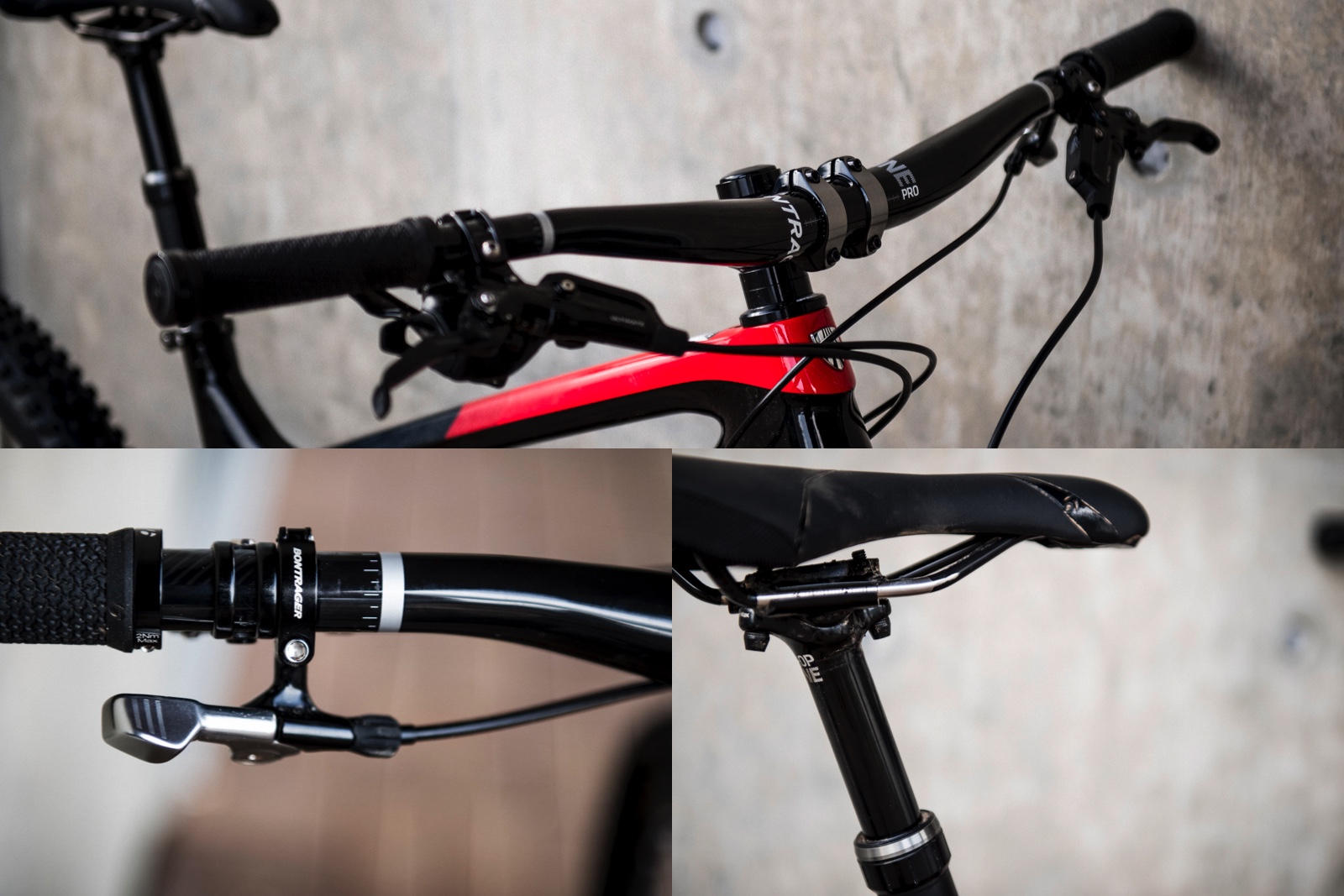 The new tires from Bontrager that were fantastic. The updated 27.5 X 2.4″ SE4 spec’d on the Remedy was a definite standout.  We’ll be looking to test a set of those tires as soon as possible. 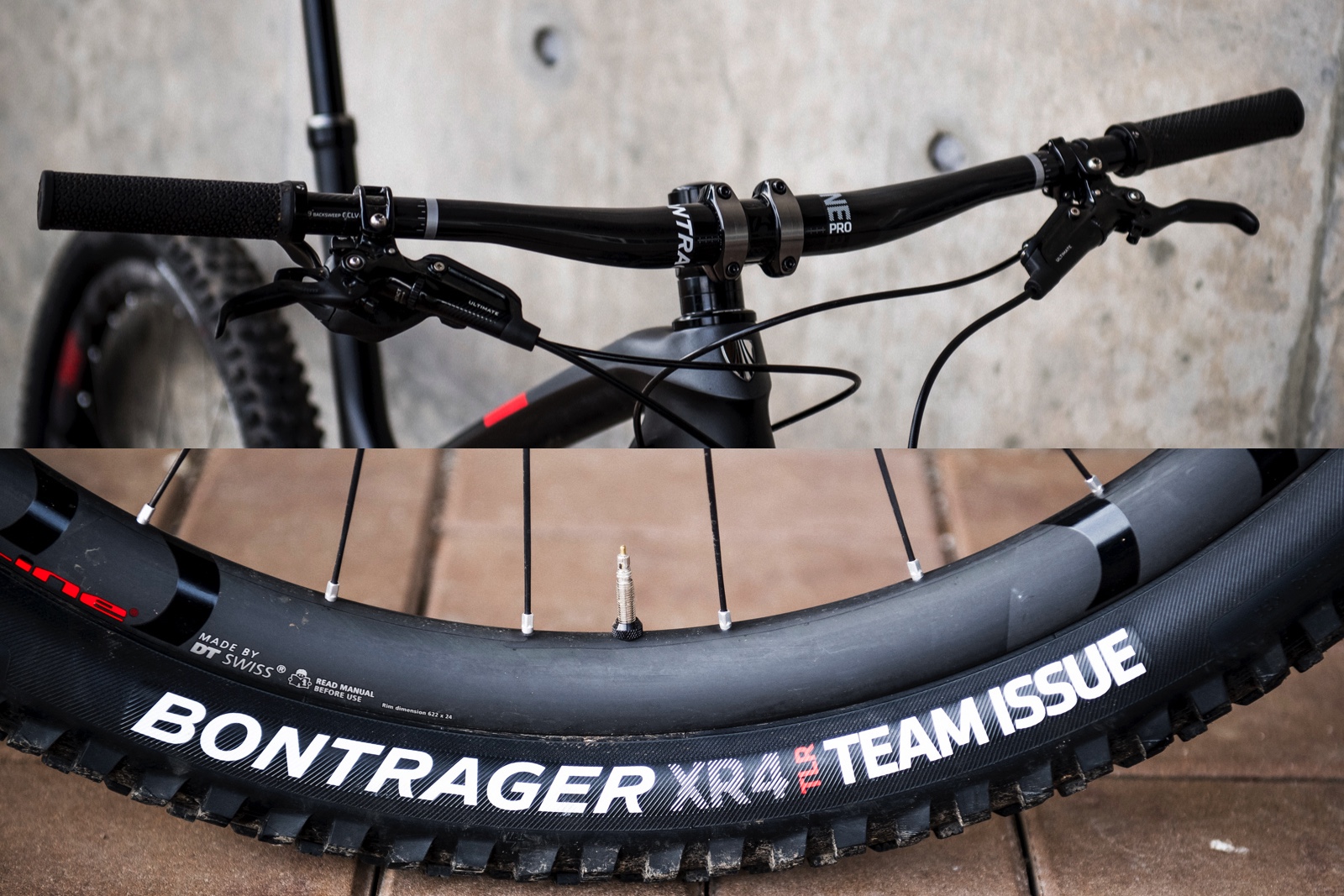 This was our North American tester’s first time aboard Eagle, the new 12 speed SRAM group.  Aimed more at the trail to enduro side of things, Eagle XO1 was spec’d on both the Remedy and the Fuel EX.  Eagle XX1 is the flagship, gold colored drivetrain aimed at cross country racing.

It was nice riding both bikes because we got to sample new 2017 offerings from both RockShox and Fox.  Our first impressions were really good.  The standout would have to be the new RockShox Deluxe rear shock.  More on that later…

Alright, enough with the tech babble, let’s get down to the nitty gritty.  It’s clear that Trek have in a sense re-stratified their lineup, thinned it out and made it more streamlined.  Does that translate to a better experience for the end user?  Well, we’ve had limited time on both of these bikes but we think Trek have made the right moves.   By the way, a Remedy is on its way so we can delve into a more comprehensive test.

Having spent significant time on last year’s Slash, we were apprehensive after learning that the Remedy had10mm less travel out back in comparison.  We assumed it might not have the plow like capability and may have a more toned down nature.  Boy were we wrong…

Straight away, we realized that a stiffer chassis and a higher volume shock far outshine a nominal 10mm of travel.  If anything, we felt a more confident on the Remedy.  It was sprightly and nimble, yet when we opened it up on rough terrain, it didn’t flinch and handled everything brilliantly.  We can’t wait to spend more time on it, but our initial thoughts on the RockShox Deluxe is that it is far and away the best inline shock we’ve ever ridden.  Were we to acquire our own Remedy, we’d pair it with a Super Deluxe and really unleash its potential.

While we initially thought Boost was a load of crap we’ve got to admit, between that and the new frame design, there is a notable increase in both lateral and torsional stiffness.  We can’t emphasize it enough, the Remedy is super rigid, but with that in mind, it doesn’t beat you up.  Interestingly enough, the geometry set from last year’s Slash and this year’s Remedy are nearly identical, thus making a direct comparison quite easy.  The point is, while we have to remain tight lipped about the fate of the Slash for a few weeks, don’t lament the fact that the Remedy is moving in on the Slash’s territory.  It will leave you every bit as impressed.

Well, we tested the flagship Fuel EX last year and we’ve got to say this is a completely different animal.  While it was a  great do it all bike, the new bike receives a massive update with a much more aggressive set of numbers.  In contrast with the Remedy, we think that the improvements in ride quality have less to do with frame design and are largely due to much improved geometry.  After all, the Fuel of old already had Boost spacing and ran a very similar suspension setup.

Most notably, the new Fuel EX sees a head angle that is nearly 2º slacker than its predecessor.  The bottom bracket height is 7mm lower and its chainstay loses a few millimeters in length.  All in all, it has a much more capable feel.  It isn’t your Dad’s mountain bike anymore.  Again, if you want to build this bike out to be a conservative all around machine, that can be done.  Put a 130mm cartridge in the fork and slap the Mino-Link in the high position and it will take on a far more reserved persona.  Trek also offer the Fuel EX in multiple 27.5″ Plus specs.  Overall, Trek have jumped aboard the aggressive 29″ train and have made an impressive debut.  If you’re coming off of last year’s Remedy 29″ this is actually an improvement despite having slightly less travel.

While it’s too early to make any bold claims, our first impressions with both of these bikes are really good.  Actually, they were amazing.  The offerings we just tried from Trek should suit an broad range of riders surprisingly well.  It’s cool to see Trek moving in an aggressive direction, while maintaining their ethos of highly adept frame design.

Taking a pulled back view of their lineup, the Remedy fits in for the crossover downhill rider who wants to shred in a bike park, race the occasional enduro or tends to prefer rowdy rides on hairy terrain for their every day missions.

The Fuel EX went from being a modest do it all 29″ bike to the perfect aggressive all around 29er for just about anyone.   Add in the fact that more novice riders can opt for 27.5 plus wheels and it just becomes more versatile.

As for our impressions on componentry, we were impressed with Trek’s new in-house Bontrager bits and looking forward to spending more time on them.  SRAM Eagle was a true eye opener for our first few rides, but time will tell if it truly is the one group that can make the front derailleur extinct.  We’re confident that it will…As for suspension, both RockShox and Fox have shored up very solid options on both bikes making it hard to pick a favorite, but the Deluxe rear shock was memorable, leaving us with our jaw on the floor.  Lastly, the SRAM Guide Ultimate brakes are the best on the market but we already knew that.

While we were fortunate enough to spend our time on flagship bikes, the takeaway point is that on both Remedy and Fuel EX, Trek’s lineup and specs within each given price range are solid and promising.  They’ve done a great job at narrowing their line up down, yet somehow covering all the bases in an even more comprehensive fashion than they ever have before.  If you’re in the market for a high performance mountain bike going into the 2017 model year, it would be downright foolish to overlook their offerings.  We can’t wait to spend more time on their newest creations.