I recently took a quick day trip from Aptos down to San Luis Obispo to get my first ride on the new SRAM G2 brakes. Essentially the second version of the Guide, they look like they’re cut from the same cloth, but in typical SRAM fashion, they’re packed with “incremental enhancements…”, part of the company’s motto. There is more than meets the eye here, so I’ll be dissecting those details and sharing some first impressions now that I’ve had a handful of rides aboard them in fairly wide ranging, and mainly tough riding conditions. 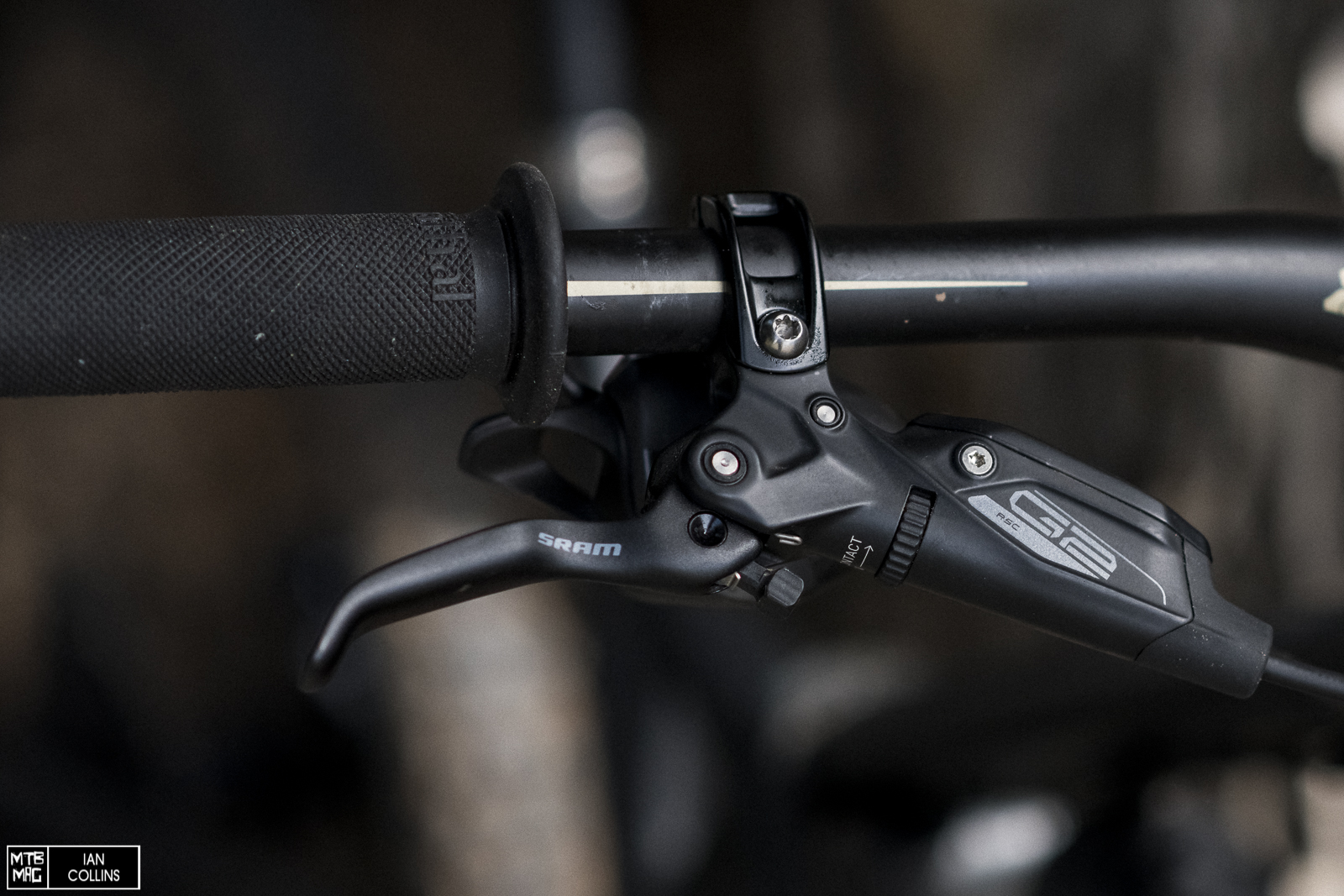 If the lever looks familiar, that’s to be expected. The G2’s lever blade share the same comfortable shape as the Guide. It also has the same reach and contact point adjustments as its predecessor. 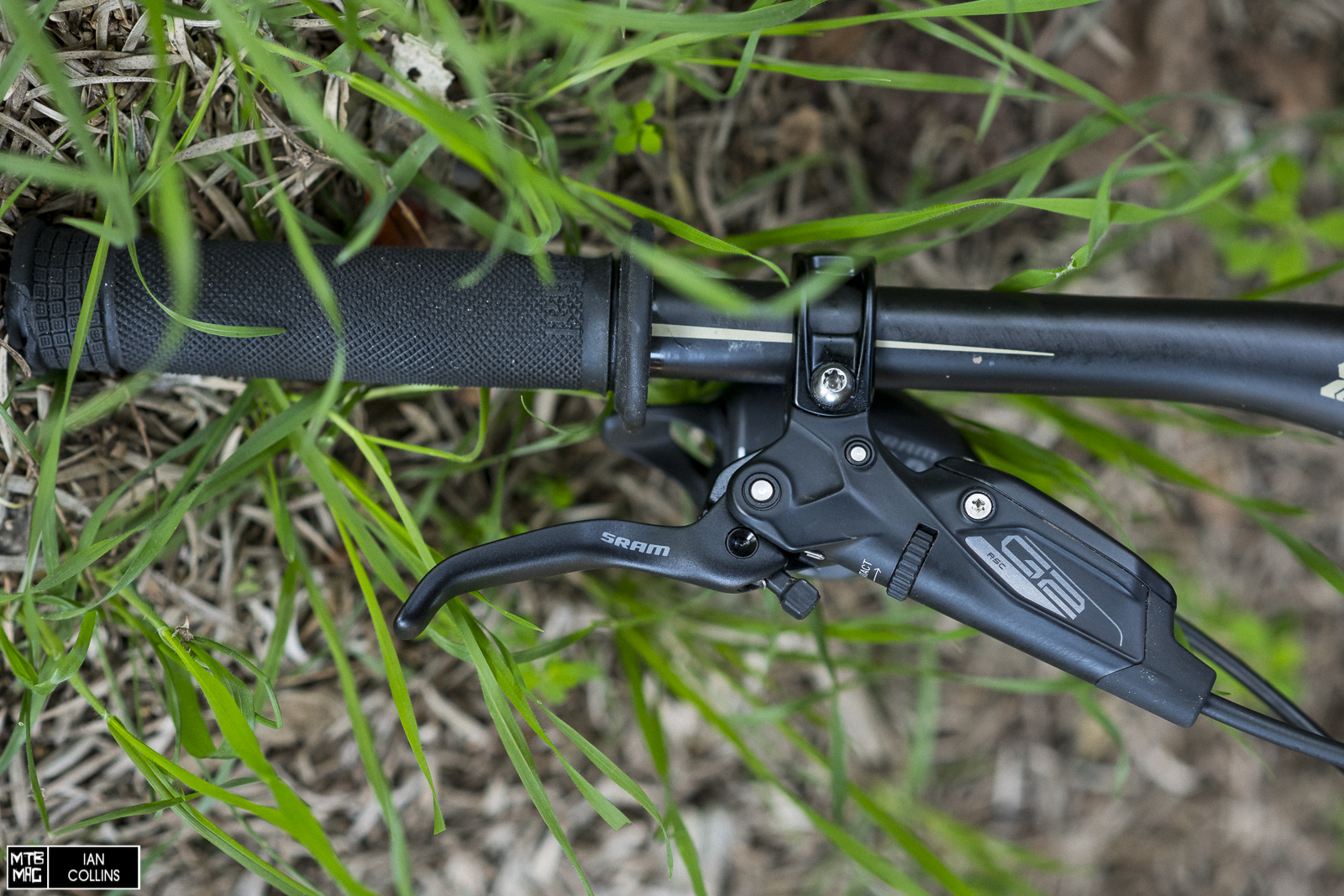 The linkage which activates the lever blade and compresses the master cylinder has a tuned leverage rate, much like a Bell Crank linkage on a full suspension bike. After testing various new leverage curves, SRAM decided to stick with their current curve, although some of the moving parts have been improved to stiffen things up. Just like the last Guide, the lever blade’s action is ergonomically quite perfect, providing a very natural stroke that prevents fatigue and helps keep your hands glued to your bar. 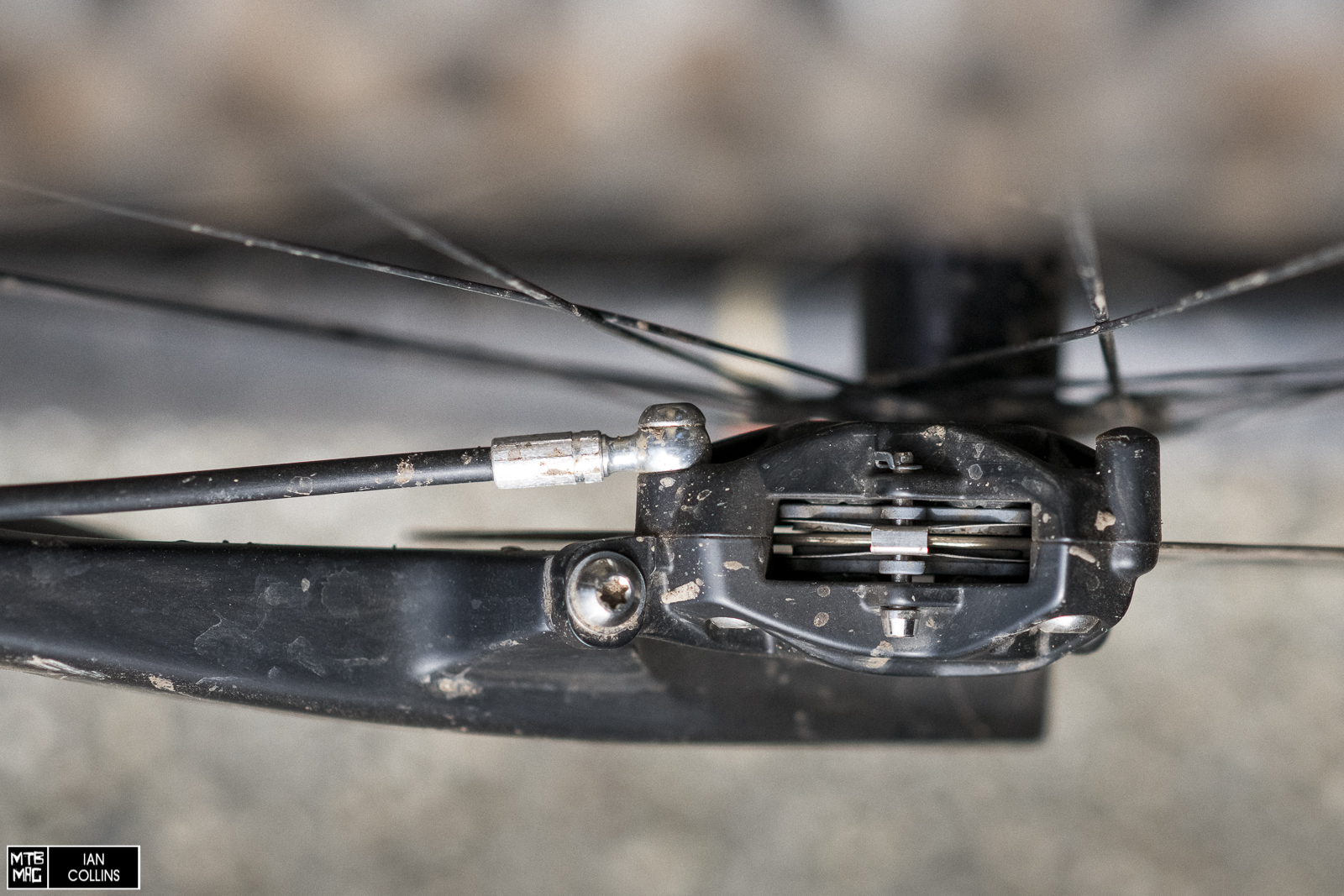 If you look closely at the photo above, you might notice that the pad backing material isn’t black(organic), nor copper(metallic), but instead it’s grey. This new pad compound is also organic, but sports a slightly different feel. More on how it rides later on in the article… 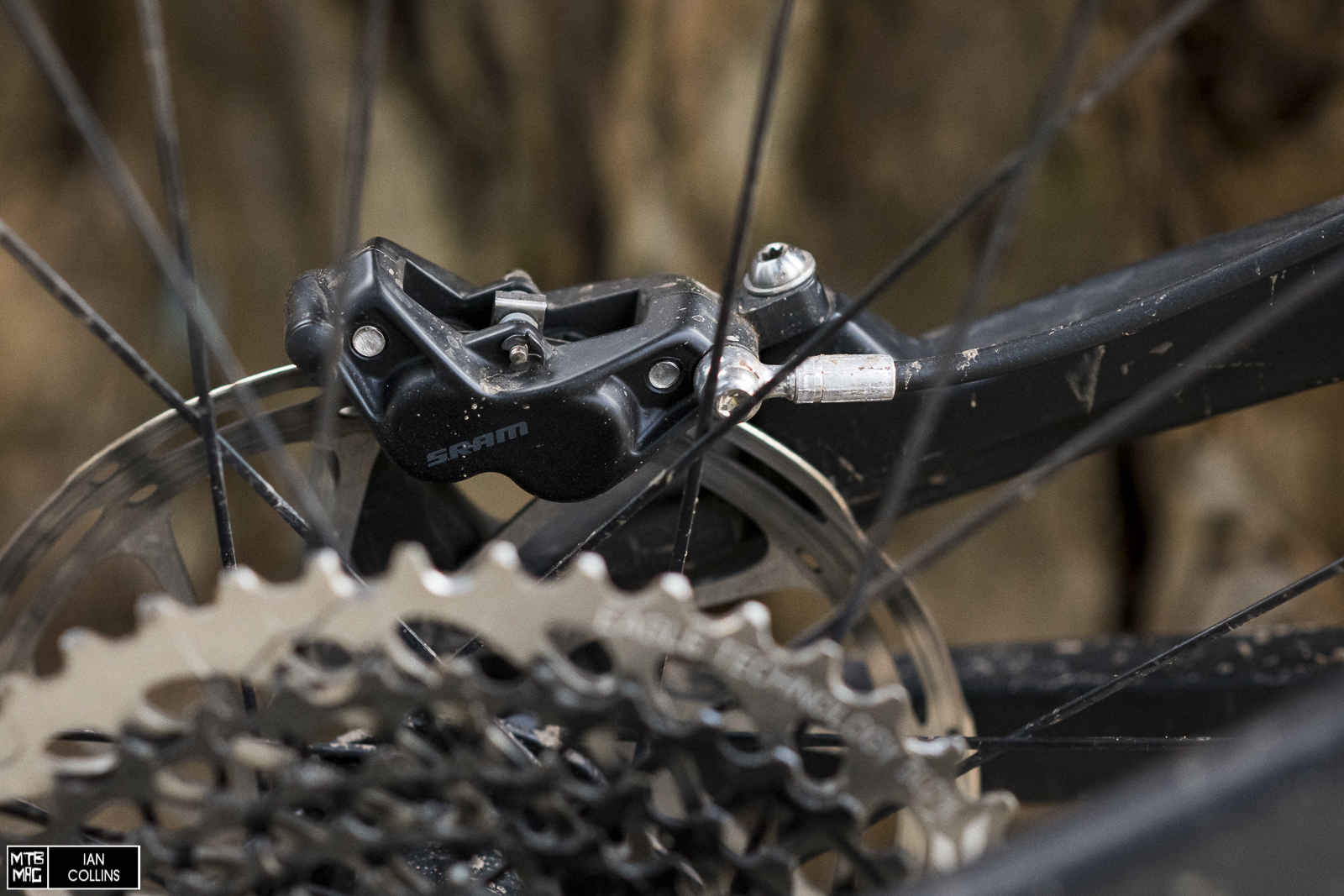 The caliper is one place that SRAM found some room for improvement, which could easily have been glossed right over on first glance. By increasing the diameter of the two bolts that hold the caliper together, and by making the pad pocket narrower, they improved the stiffness of the caliper. It’s worth noting that you can still remove/install pads without taking the caliper off. 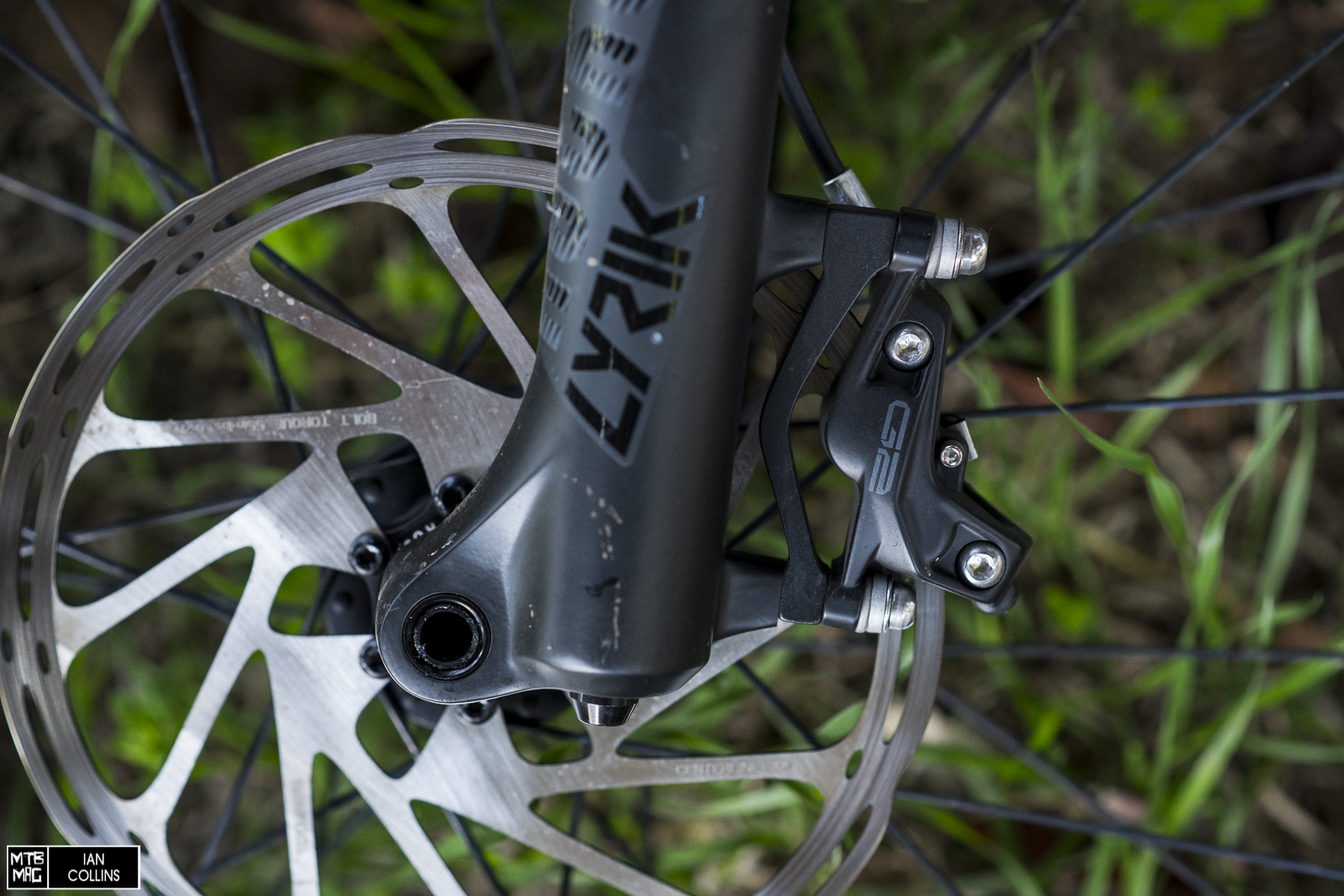 The improvements to the caliper continue, internally…As SRAM has refined the inside of the caliper, they were able to make the switch from Aluminum pistons to Phenolic pistons, and in the process, due to the mitigated heat transferred to the caliper, “heat shield” became less necessary and thus, was removed.

Out of the gate we found that the G2’s do have a very familiar feel, and unsurprisingly they felt a lot like Guides. Once they broke in however, we noticed some slight differences in the bite, which is likely attributed to the new pad compound. In my past experience, I noticed that the “quiet” organic compound did indeed feature less noise, at the expense of consistency in wet conditions and long descents. On the contrary, the metallic compound is better in the aforementioned conditions, and hits harder, but is prone to making a bit of a howl. It’s worth noting that both of those pads are still available, but to sum it up, I’d say the new “Power” compound sits square in the middle.

I first rode the G2 brakes on a long, rough, rocky descent near SRAM’s San Luis Obispo office in wet, muddy conditions. I then took them back to Santa Cruz and rode the Campus trails, which cover the full gamut from steep, rutted & rocky to mid grade, flowy and loamy. Lastly, in my final test, I pushed them a bit hard on a fairly insane trail that my friends and I built in Aptos, which drops 1,100 feet in .9 miles. There, they offered better performance than I remember Guides provided, but that trail is pushing well into Code territory. SRAM claims that the G2 has a 7% increase in power over the Guide. While I don’t doubt their methodology in testing, I’d be lying if I claimed to feel a perceptible increase in power on trail, although they did feel a bit more consistent on long descents.

Although I have personally never owned a set of Guides with any issues,  but I’m aware that there were some isolated problems with some batches. Knowing that SRAM has built on a darn good platform as well as addressed those issues, I feel confident that they’re ghosts of the past. With that in mind, I’ve only ridden the G2’s a handful of times, so I’ll have to report back on my long term findings in a few months. What’s certain is that they have have a slightly better trail feel than Guides, and despite wearing a similar aesthetic, the list of subtle improvements is impressively long and adds up to a greatly refined brake.