Last month we spent a few days with Specialized in Northern California for the launch of the new Camber. During that same week, we also had the opportunity to spend some time aboard the new Stumpjumper 29″. The classic trail slayer got some ground breaking new updates. Specialized did away with EVO models and just has two Stumpy offerings : 150mm/27.5″ & 135mm/29″. The new Stumpjumper was also the first bike to see the SWAT door, a downtube storage compartment that is accessed by way of a trap door under the bottle cage. Inside the downtube you can put most anything that will fit – notably, a mini pump, spare tube and a windbreaker will all fit inside. Anyhow, we spent a couple of days shredding some sublime singletrack on the new bike – here’s what we found. 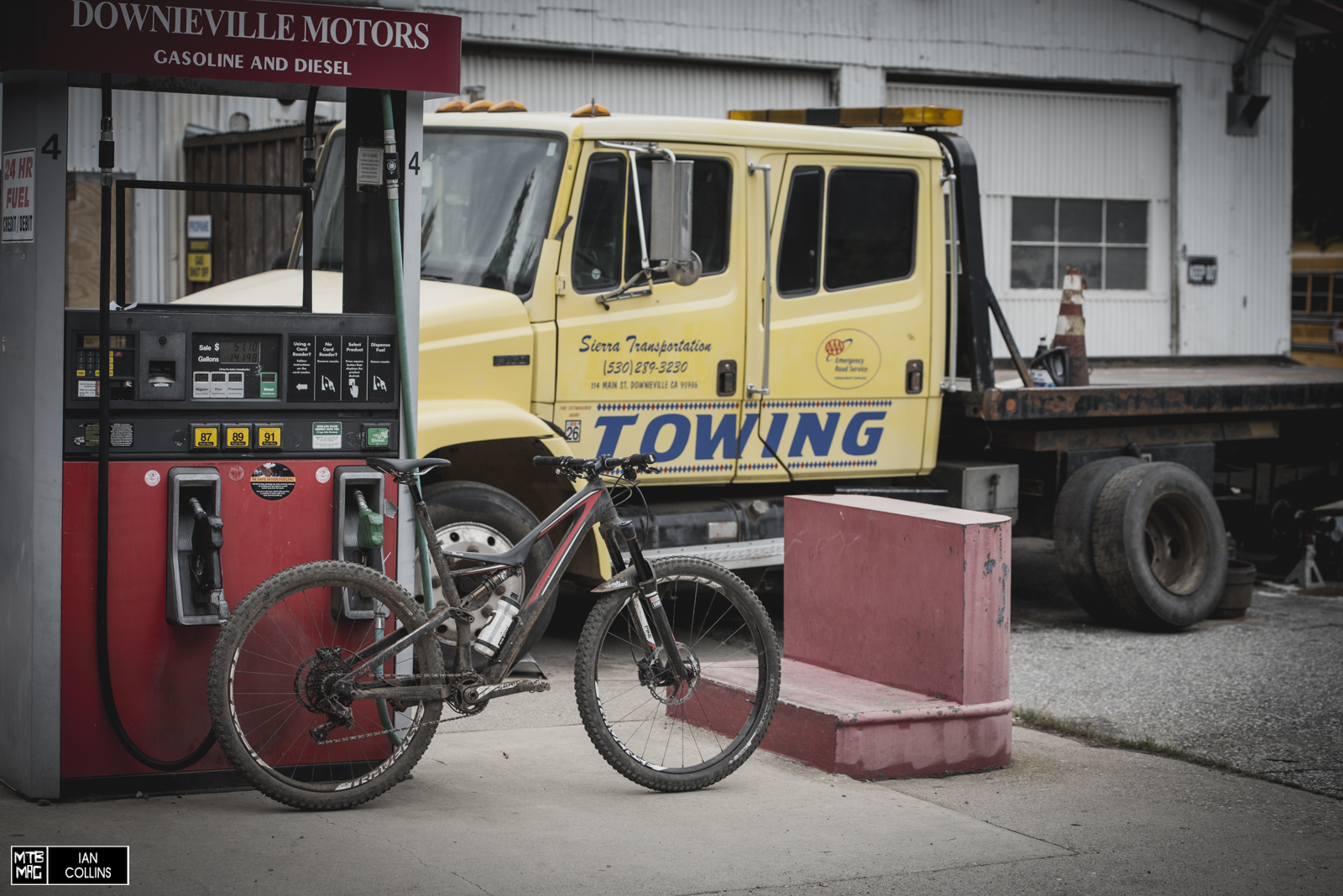 In a nutshell, the bike’s geometry has gotten more aggressive. Slacker head angle(69º to 67.5º), lower BB(338mm to 336mm) and shorter stays(450mm to 437mm) compared to last years Stumpy 29. The sum of all of these small changes help add up to a bike that has a very different attitude. 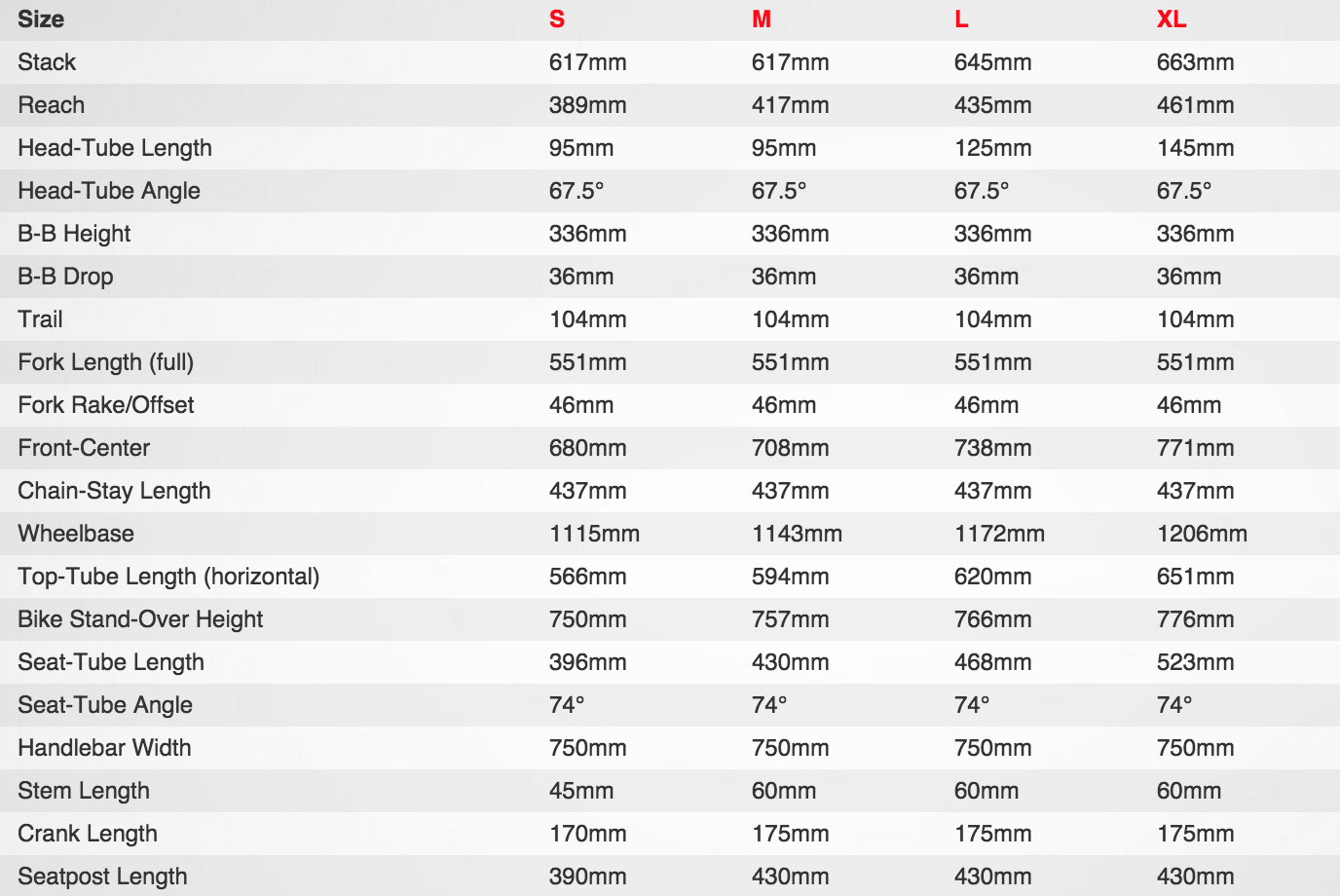 Our 6 foot tall, 180 pound rider hopped onto a Large Stumpjumper FSR Expert. At $5900 it isn’t cheap, but the value is definitely there and this is their bread and butter offering. All too often, media are sent out on flagship bikes at press camps and have their mind blown by a new bike. What matters most to the audience(consumers) is quite frankly how a brand’s mid priced, value spec’d bikes stack up to the competition. 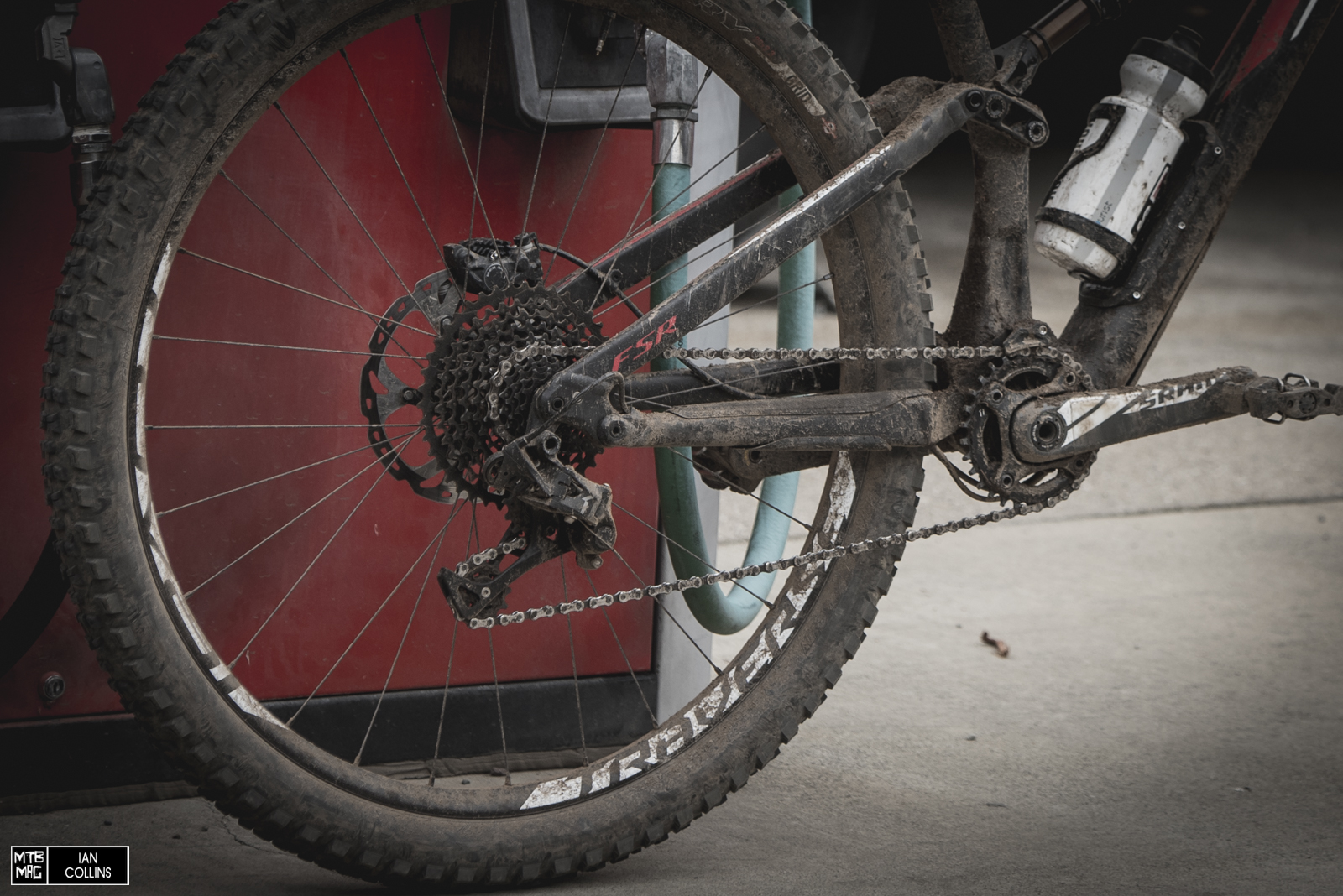 Compared to the top end model, the rear end(seat/chainstays) is aluminum instead of carbon, as are the wheels. Speaking of wheels the Roval Traverse AL are no joke. With 29mm internal width rims they offer more traction than the average wheel and to be honest, it was the first 29″ aluminum wheelset that we were impressed by in terms of handling. We haven’t ridden 29″ wheels that felt this good aside from some $2000 plus offerings. Actually, these felt better than most of the 29″ carbon wheels we’ve ridden. At $600 retail, we’re shocked that more riders are scrambling to slap them on their bikes more often.

Back to the spec – smart, proven choices like a RockShox Pike fork, Shimano XT brakes, Carbon SRAM cranks and an 1 X 11 speed SRAM X1 drivetrain round out the rest of the package. Specialized stuck with a Fox Float out back – if we owned the bike, we’d likely swap it out with a RockShox Monarch Plus debonair. 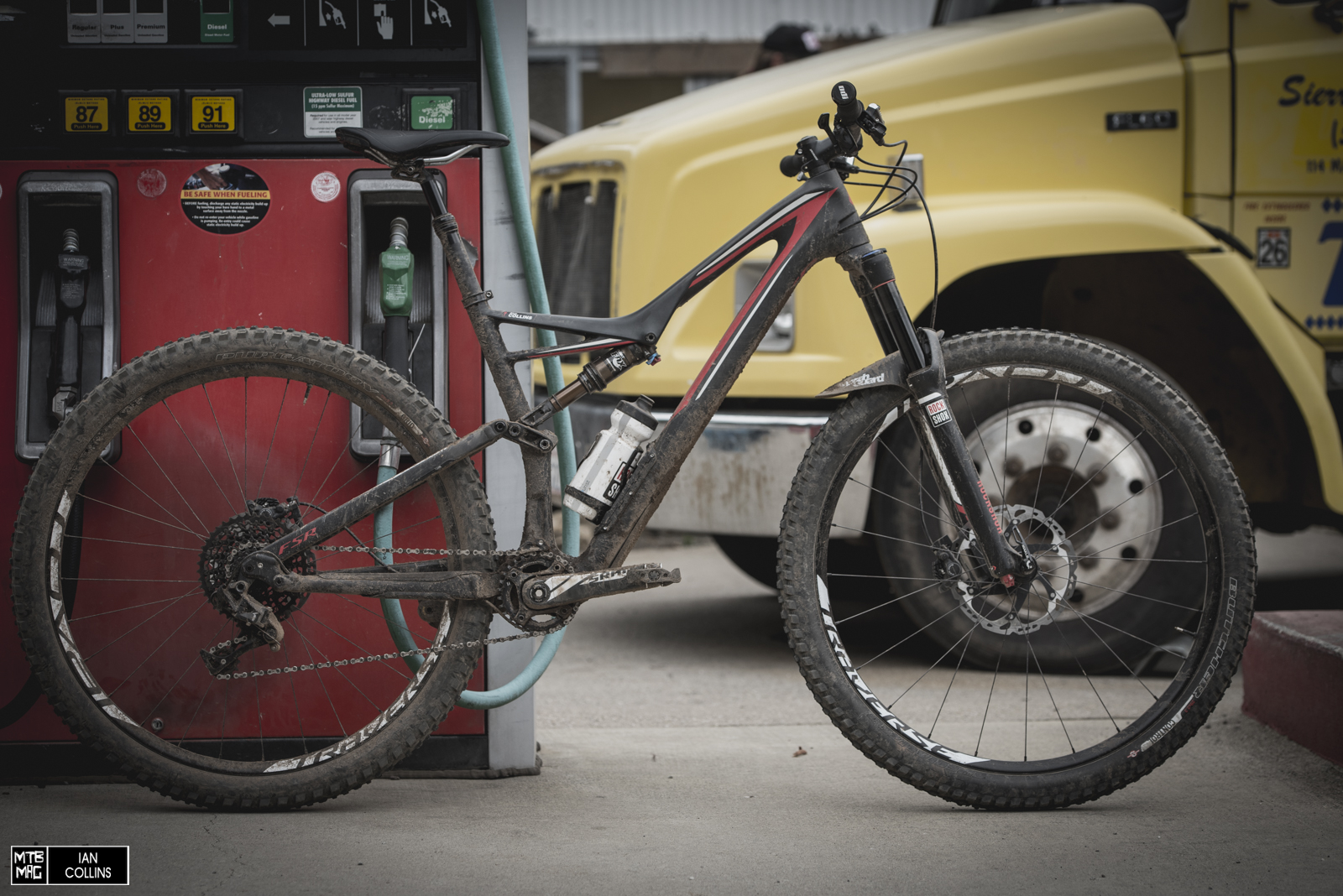 Before we even headed out we did what any other mountain biker would do. We geared up. Most times that we’d head out on a 4 hour ride, we’d bring a pack. With SWAT and with the new Stumpjumper, there is no need. That is perhaps one of the greatest selling points for this all day bike. With some brooding weather on the horizon we jammed a windbreaker into our downtube below the pump and spare tube. It’s nice that the weight is down low and not at the highest point on your body. That makes you less top heavy and helps your cornering. Above the shock a multi tool is cradled near the upper eyelet. We slapped one bottle of water on the bike and in our SWAT bibs we put a second bottle with recovery drink in the middle pouch and a sandwich in the left pouch, and our wallet with a couple of GU packets in the right pouch. Good to go.

The first thing you’ll notice aboard the Stumpy is its quick handling. Gone are the days where 29″ bikes are a drag. Fast, responsive and flickable. Mind the low bb in the rocks, but it will reward you in the fast sections and tight turns. Our size large felt a bit small in the top tube. Partially because we removed the long-ish stock stem and swapped it for a shorter, but quicker handling 60mm. The super short 437mm stays were a treat in the switchbacks and squared off turns…granted, bikes with longer stays will be a bit more composed in super high speed sections, but provided that you’re on your toes it should pose no issues. Jumping was a treat. The fork was quite lively and the bike had a great deal of pop, even with the somewhat vague feeling rear shock. Don’t read into it too much, the shock worked well and gave us no grief, but it wouldn’t be our first choice. 135mm of travel and big wheels with highly capable tires gave us enough to tackle some surprisingly burly terrain, all the while being quite forgiving when we made poor and/or wild line choices.

Pedaling efficiency was top notch and the chassis stiffness was superb in all circumstances. We did NOT feel like the aluminum rear end left the Stumpy lacking in liveliness, but surely the flagship bike’s carbon rear end would make it a bit more light on its feet. At $3,000 more however, you have to pay to play and it is worth keeping in mind that it won’t be as tolerant of errant rock strikes or crashes. Shifting and braking were an afterthought, and the new Command Post IRcc is a big step forward from its previous iteration despite taking some time to get accustomed to. The choice of a 30 Tooth chainring is smart as it suits the majority of riders looking to hop aboard this bike and just go. If you go on 8 hour mega rides, slap a 28 Tooth on; if you’re racing then man up and pop a 32 or 34 tooth on. It will take 10 minutes and you could do so for under $50.

We’re by no means suggesting that we’ve done a massive, thorough, comprehensive 6 month test on the Stumpjumper. With that in mind, we can’t speak for long term durability. However, after a few huge days in vast mix of terrain and riding conditions we wanted to summarize our thoughts on the bike. One thing to consider is that Specialized offer virtually the exact same bike with 150mm of travel and 27.5″ wheels. That bike is approaching the Enduro side of the all mountain realm and the 29″ version that we rode seems to fit the bill as more of an all day/one bike to rule them all offering. In summary – at $5,900 this is the model that will impress the critics. Often known for their super high end, baller bikes, it’s refreshing to see what Specialized is capable of packaging for a more selective consumer looking for the most bang for the buck. With a brilliant spec, incredible frame and some groundbreaking new features, we think the Stumpjumper FSR Expert will be tough to beat in terms of value and performance. This should come as no surprise though…all out trail slayer has been the Stumpjumper’s ethos for two decades now.