Last Friday Stoll presented the new T2 and M2 bikes , where T stands for Trail and M for Marathon. One chassis for two bikes, but with different linkage and suspension, Stoll has thus revised the T1 and M1 respectively, which I had written in depth about at the time of their release and after several months of testing. Remember, Stoll is one of the few brands that produces in Europe – more precisely at Bike Ahead in Germany, where the full carbon frames are produced. Stoll’s headquarters are located in Switzerland, in the canton of Schaffhausen.

Yesterday Thomas (Stoll, editor’s note: the owner) came to visit us at our office at the base of Monte Bar, so we took the opportunity to ride the San Lucio trail and try out the new doods. 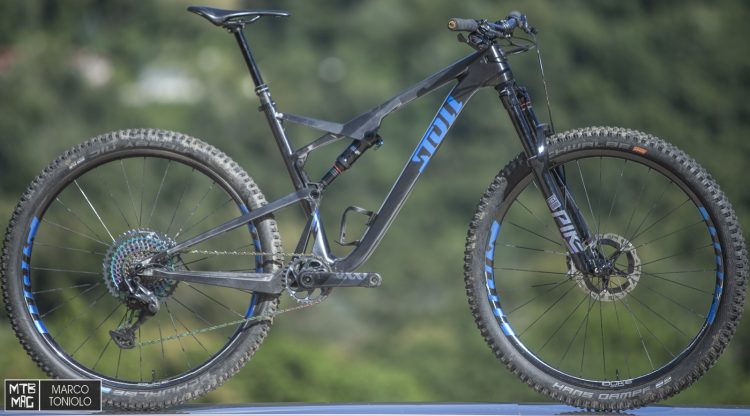 Above you see the T2 in size L that I used. On our scale, without pedals, it landed at 11.5 kg. Upon first glance the frame looks almost identical to the previous one, but Stoll has worked a lot on the geometry and suspension. The travel is 140mm at the front and rear.

The T2 has become longer, more relaxed in its head angle and steeper in its seat angle. On the latter aspect, it is more noticeable on the M2. After testing for fit, the ideal size for me would have been a Medium, because I found the Large to be quite long, despite using a shorter a 50mm stem. 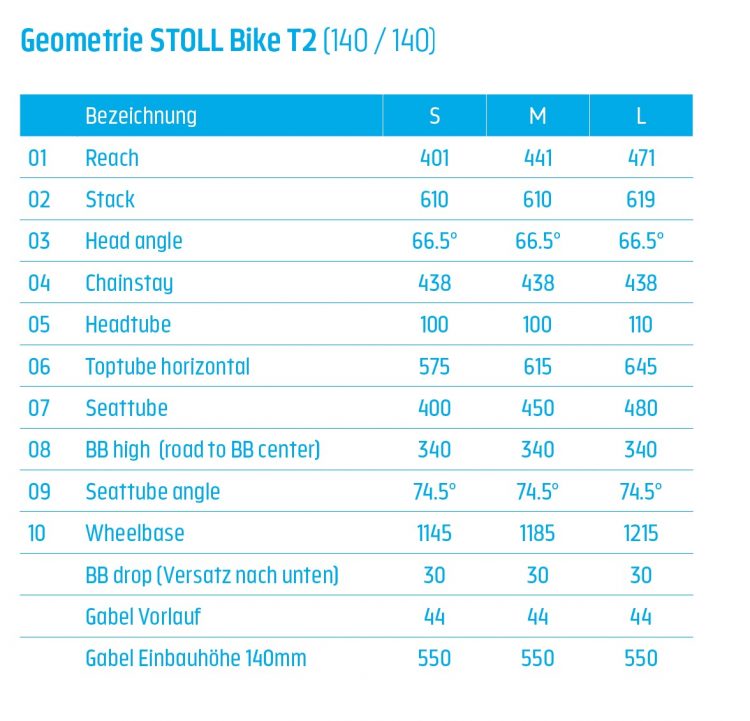 The rear suspension has become more sensitive to small bumps, which has increased its already excellent traction uphill on technical trails.

…At the same time it is very progressive from the mid-stroke onwards, avoiding hitting the end of the stroke on impacts of a certain level. This characteristic is largely obtained thanks to a new kinematics – below you can also see the new linkage. The suspension system remains a VPP. 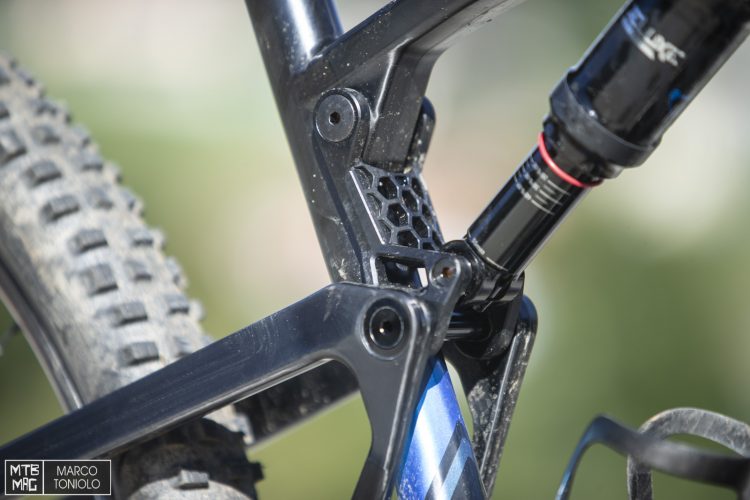 The old T1 had a somewhat flexy rear end, which is why Stoll revised the chainstays and the entire rear triangle, now built out of one-piece carbon. The difference was immediately felt on the trails, as the whole bike has become more stable on fast sections, instilling more confidence when terrain becomes challenging. Combined with a suspension layout that is more sensitive to small bumps, you can navigate more safely between rocks and roots. 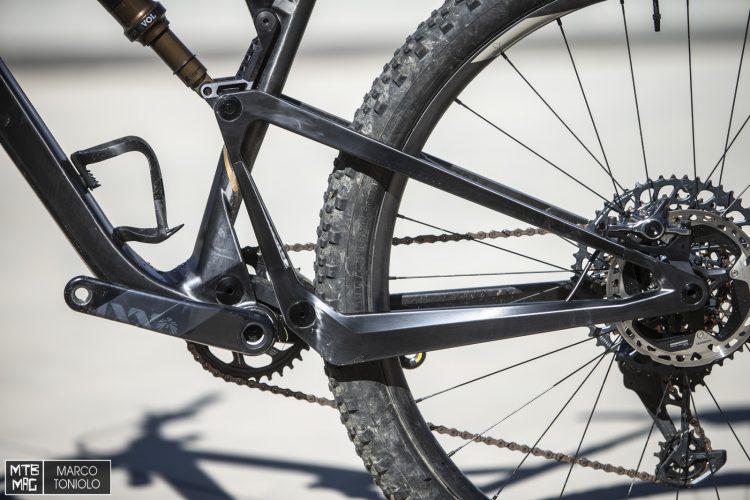 The Duke wheels with an internal channel of 30mm at the front and 27.5mm at the rear are excellent, also because their profile is rather low, thus avoiding being too rigid and consequently uncomfortable and tiring for the arms and wrists. The tires are generously meaty with Schwalbe’s Hans Dampf up front and Nobby Nic behind, both in 2.35″. 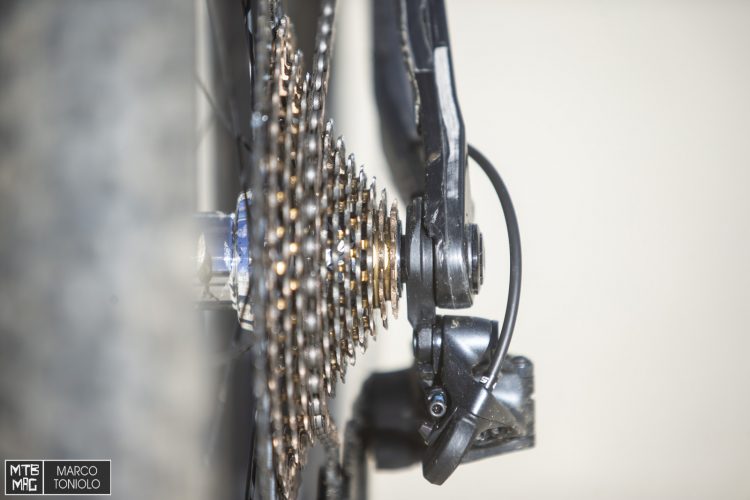 Interesting is the choice to mount SRAM’s universal dropout, called UDH (Universal Derailleur Hanger), because it leaves residual space on the cassette, suggesting that the 13 speeds might not be so far away… 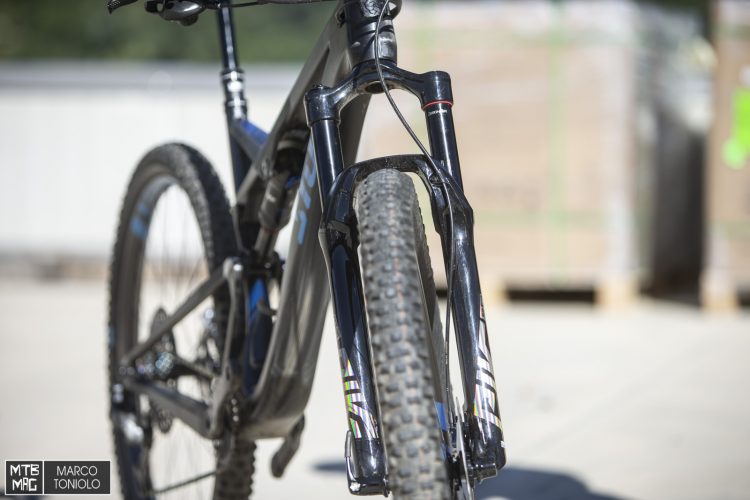 Up front we find a Rock Shox Pike Ultimate with 140mm of travel that goes very well with the rear suspension in terms of sensitivity to small bumps.

An 11.5kg trail bike is a boon on a 1000m climb in one pull with several steep pitches, such as the one that goes up to Passo San Lucio. You can climb well when you’re not wasting energy with longer travel enduro bikes and their subsequent weights. As acclimated as I am to steep saddle angles, more like 76° than the T2’s 74.5°, I was a bit skeptical about its skills as a climber on the technical bits, but I began to change my mind as I hit the trails. I rode a rocky punch on the trail that I use as a reference with both the L and M size that Thomas was riding on, and I found myself with my body weight well centered on the bike, not having to work too much with the torso or move excessively up to the saddle’s tip. Note that the length of the chainstays is the same as the T1. The front wheel stays planted down to the ground nicely as well. 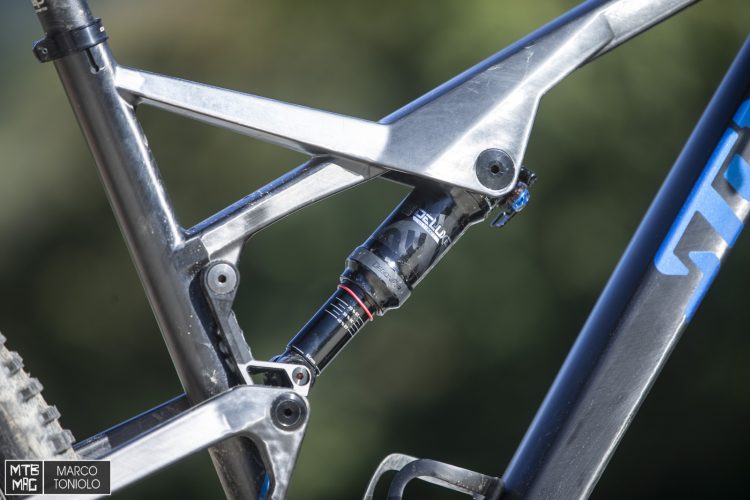 The choice of having the Rock Shox Deluxe shock absorber tuned so that, with the lever towards the “closed”, there remains a bit of light movement, in fact I was able to use it uphill on dirt with the compression closed. RockShox offers manufacturers the choice between different levels of firmness at the lock out, since there is no intermediate position (as there is on Fox) between open and closed. I must also say that, with the shock completely open, the back end is neutral in pedaling and does not oscillate annoyingly.

I have already mentioned the improved uphill traction thanks to the new kinematics, a factor which, together with the new geometry, has undoubtedly greatly improved Stoll’s trail bike. Downhill, the T2 is easy to turn and pump over obstacles, thanks to its ultra light weight, and thus it becomes an extremely fun rig suitable for most situations in which you find yourself on alpine trails. On the other hand, a 29-inch with 140mm of travel is in itself a multipurpose bike that manages to entertain on the downhills, even at high speeds.

The bottom bracket is quite low, which improves the bike’s cornering, while on the other hand on technical uphill sections you have to pay some attention to where you put the pedals. The slackened head angle helped to give stability to the bike on the whole, without penalizing the ease of riding along on straight, mid-grade sections.

After a day of riding I feel that Stoll has done a great job, improving the T1 without altering its genes too much, but rather implementing subtle changes to the fundamental points such as geometry and suspension. Knowing the quality of the chassis and its construction, I have little doubt about the T2’s long term performance, but I hope to be able to tell that story after a long-term test.

I wanted to spend a few lines discussing the M2, which you can see in the photo below. With 120mm of travel front and rear it’s a marathon bike or, if you prefer a 10.4kg downcountry bike without pedals. A rocket uphill and a rocket downhill, which however on the battered final part of yesterday’s lap showed its limits, as compared to a 140mm travel trail bike. 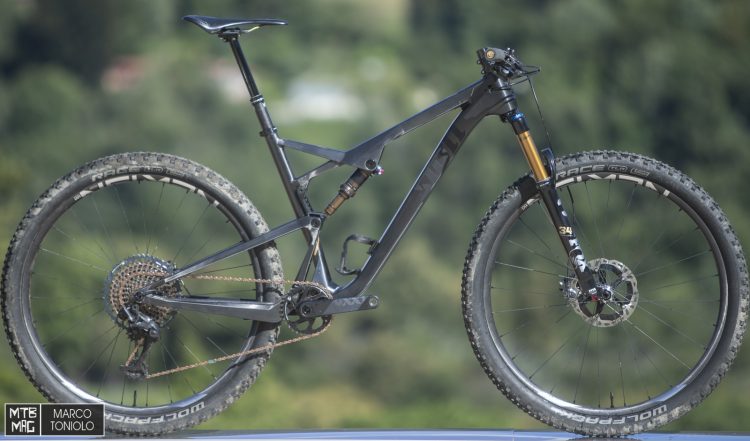 The Newmen carbon wheels are beautiful, with a total weight of only 1350 grams, and with a low profile. 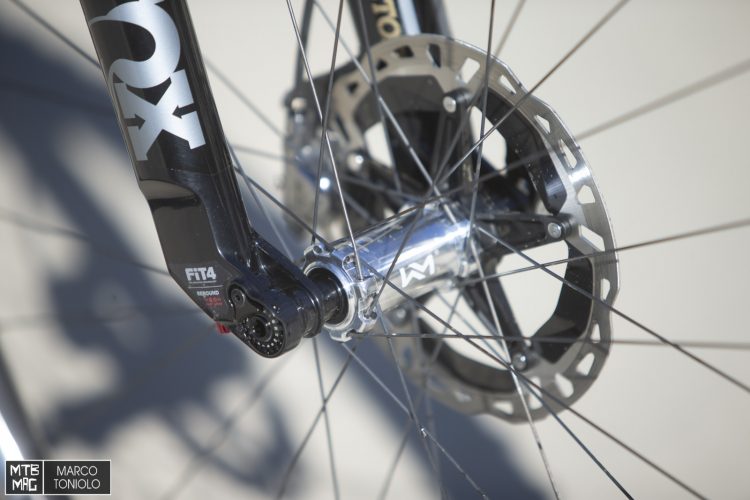 Also this Stoll is mounted with the new Yep Uptimizer 3.0 seatpost, also Swiss. Not for nothing, the owner Andrea Chiesa was also riding with us yesterday. The builds you see in the pictures above are custom, like all the builds that Stoll offers. One of the peculiarities of this brand, in fact, is the customization of the bike according to the rider’s preferences.

On their website you will find all the information and prices.

[Video] The Making of B-Rage