Something was boiling in the air at GT for some time and it’s long been known that there is a new enduro model on the way from the American brand. It had already been discovered some time ago, during a stage of the EWS in Chilea.

After a few months, we were invited to Trysil, Norway to discover all the secrets of the new  Sensor and the new  Force, with the new, LTS (Linkage Tuned Suspension) suspension layout.

The new Sensors and Force represent an important turning point for the American brand that completely abandons their most recent interpretations, namely the AOS (Angle Optimized Geometry) and the I-Drive, which they have finally forgone for a 4-bar style suspension scheme 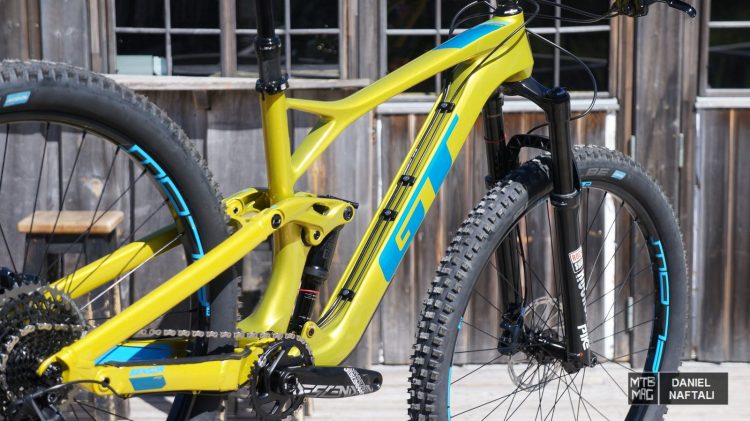 The change is quite drastic, because the I-Drive has been the hallmark of GT for many, many years. Executed in a rather daring way, a floating bottom bracket allowed a very high main pivot, first with the I-Drive then with the AOS, this general layout has been the workhorse of GT. Now it is no longer.

There were those who liked it (personally, I found it very fun to ride, but it has a problem: it is very much affected by braking input. As long as you let the bike go a bit, the rear end eats everything, but when the braking got heavy, the suspension no longer worked as it should. The more brakes, the more it breaks down, thus requiring you to brake even more. A vicious cycle. In reality, the secret to remedy this situation is to let off the rear brake to make the bike more stable, but this requires a certain malice that the average rider hardly finds in times of difficulty. 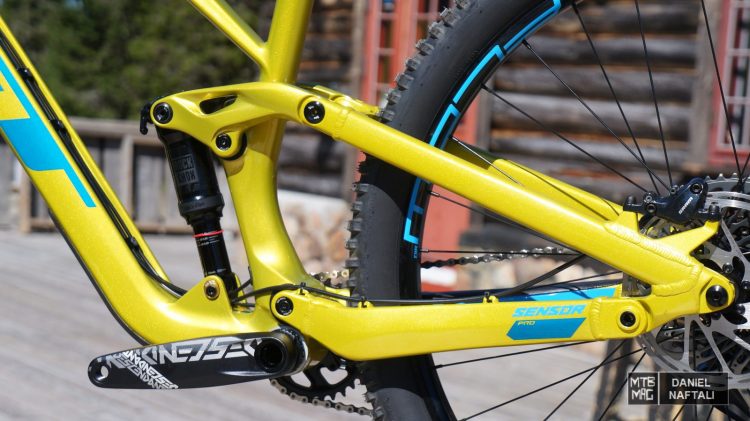 The new LTS was designed precisely to mark a turning point, to create an extremely independent braking bike that is perfect for every type of rider, even the one that grabs a bit too much brake.

The acronym  LTS stands for  Linkage Tuned Suspension and identifies the new suspension scheme that GT will use on the Sensor and the Force, but not solely those bikes (in the future we will see further changes on other models).

This is a 4-bar suspension scheme , obviously interpreted personally by GT. To those who comment “yes, but it’s the same as …” Let’s say right away that aesthetics is one thing, but from a technical point of view two bicycles, even if they have ballpark suspension patterns of the same type, can have very different behaviors, so every bike must be analyzed independently based on its characteristics,

At the compression curve level,  the new LTS has a more progressive curve and a high initial sensitivity on small impacts. It is compatible with both modern coil spring and air shock absorbers.

The value of anti squat has been optimized to ensure maximum traction, without giving too much emphasis on pedaling efficiency. The LTS was born to make the bike fun to ride, therefore, it is not an XC bike where what only matters going uphill. In any case, to make the pedaling behavior as neutral as possible,  pedal kickback has been reduced to a minimum, with a low placed pivot that is optimized for Eagle 1 × 12 transmissions, with 32-34T crowns. 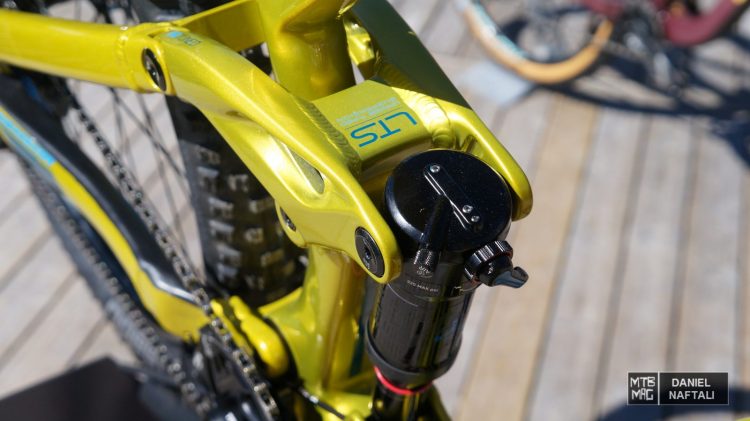 The rear shock has a Trunnion upper mount, on bearings and with the damper placed between the linkage. This allows the use of a longer shock stroke and helps make the most of the improved smoothness and durability of the bearing mount. 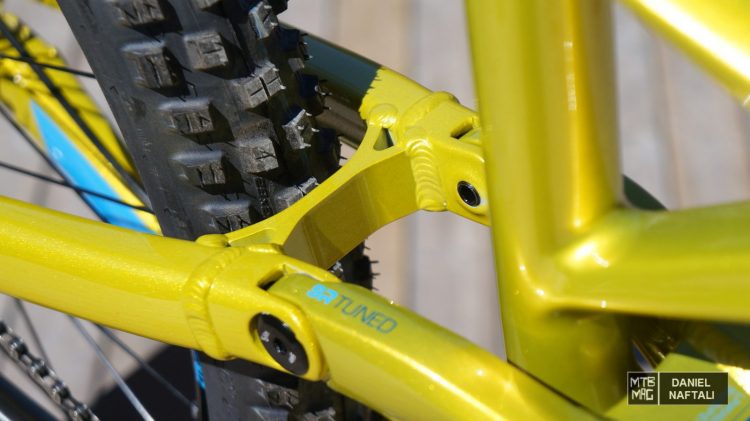 A lot of work has been done on the chassis’ linkage hardware and pivots, completely redesigned, reinforced and with sturdy MAX Enduro bearings. We all know the delicacy of the old I-Drive hardware, and the GT engineers have worked to avoid this kind of problem. The maintenance of the frame is now extremely simple. 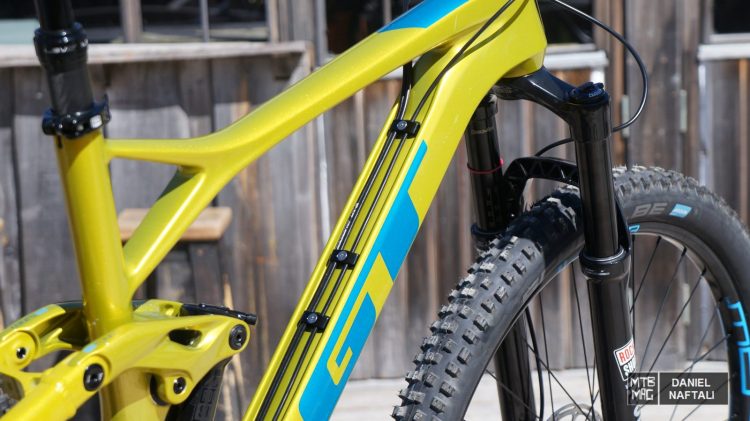 According to the GT tradition, the cable passage is completely external , for easier maintenance. In order not to compromise the aesthetics of the bicycle, on the upper part of the downtube of the carbon frame a space has been created to house tubes and hoses called the groove tube .

The frame will be available in both aluminum and carbon, with an important novelty: the carbon frame will have only the main triangle in carbon, the rear end and the linkage will be in aluminum . The reasons for this choice are essentially twofold: the aluminum rear end resists impacts better and is more durable, secondly it costs less and allowed GT to keep a lower complete bike price.

The new Sensor completely redesigns its look with important changes, in addition to the suspension scheme we talked about before. 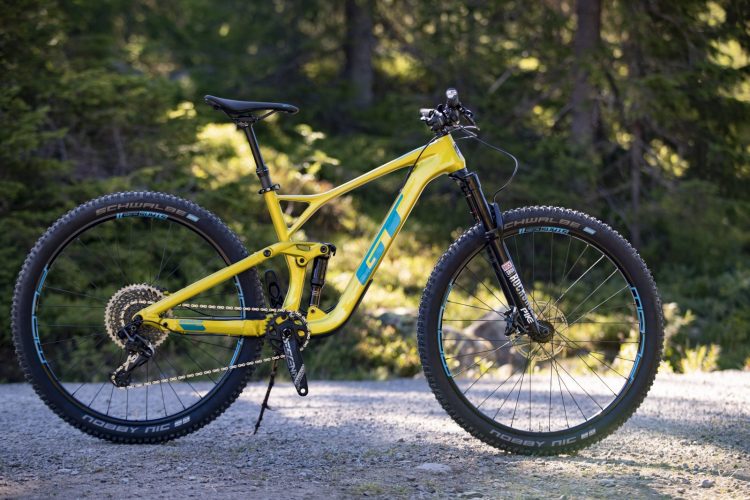 The first and most important change is the wheel diameter, now 29 “. The rear travel is 130mm, combined with a 130mm fork.

There is ample space for tools and a water bolttle cage, and a  flip chip allows you to vary the geometry between higher BB/steeper head angle, and lower/slacker.

Looking at the geometry, the head angle and the seat angle stand out immediately. The head angle of the Sensor is  66 ° – 65.5 ° – very, very slack for a 29 “trail bike. The saddle angle is also extremely steep, with a value of  76 ° – 76.5 ° . The general tendency of modern bicycles is to have a slack head angle and a steep seat angle, and the Sensor pushes these numbers fairly aggressively.

The other geometric dimensions are instead average for this type of bike.

The Sensor is compatible only with 1x drivetrains and is optimized for 12 speeds. The rear axle is 148 × 12 boost. 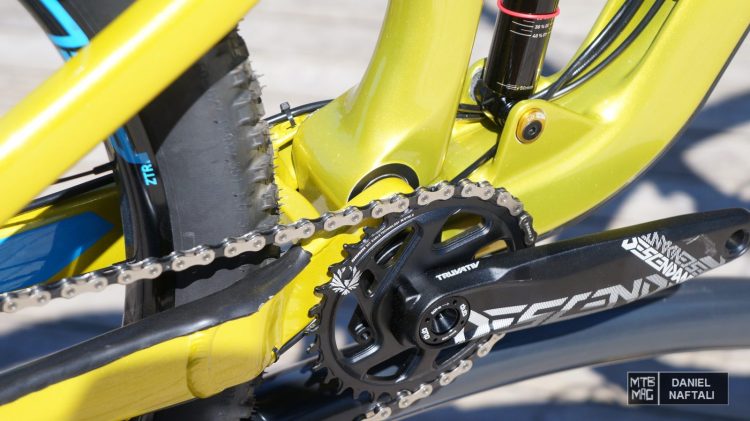 Another interesting aspect is the addition of the ISCG-05 attachment (replaceable among other things) which allows you to mount a chain guide or a skid plate. The seat tube is now 31.6mm and the bottom bracket is threaded. 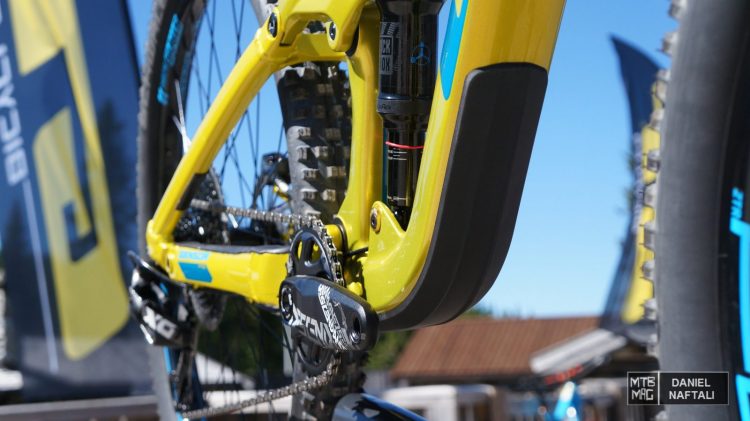 The new protections on the frame are excellent, especially that under the downtube, made of thick rubber. It’s ideal for protecting the carbon frame from rocks and whatever else flings off of your front tire.

The prices of the models are:

The Sensor in the field 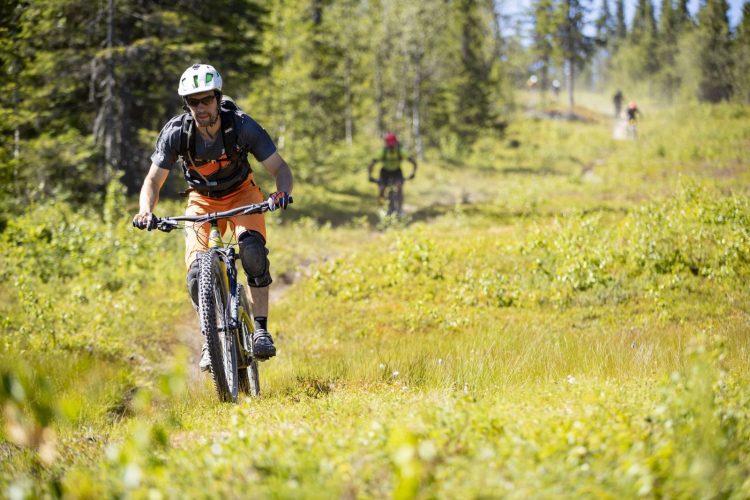 Climbin in the saddle of the Sensor, the impression is a bike that’s not too long but with a rather advanced body position, certainly due to the very vertical saddle angle. As recommended by GT, we used 25% sag: it may seem trivial, but the kinematics of the bike are designed to work with a reduced sag, so as to have more positive travel at the rear wheel.

Once you start, the impression is clear: the new Sensor is a completely different bike from the old one. The geometry is vastly different, and the bike seems to be more lively.

Let’s start with a fast, fairly well groomed trails with a load of changes in direction and various different obstacles, never too big. The rear suspension is stands out right away for its excellent ability to absorb small bumps: it is really plush at the beginning and then becomes quite progressive. In fact, it almost never hit the end of the travel, despite being pushed through some jumps that weren’t really suitable for a trail bike. 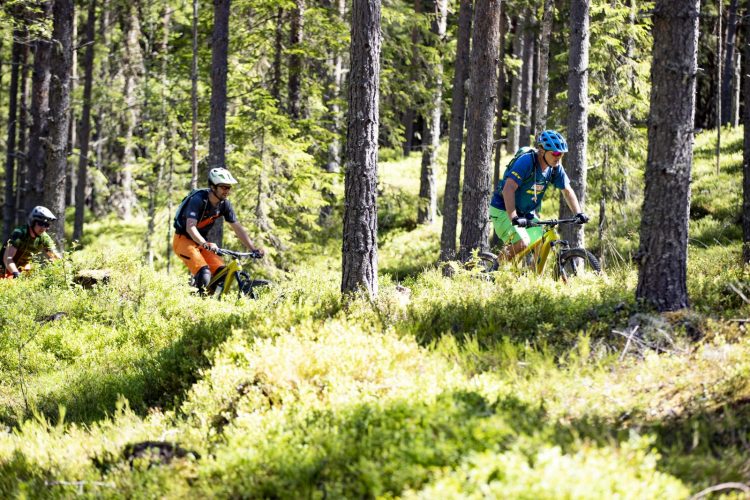 Facing a single track section full of roots and stretches of uphill punches, that became more and more technical, with rocks, steps and ledges, some of which, almost only Hans Rey, who was with us in the group, could clean. Despite starting off with the suspension in intermediate (trail) mode, I decided to switch to open mode and I quickly realized that actually the absorption capacities of the uphill obstacles of the Sensor are really excellent. The suspension works well and does leave you with annoying pedal kickback, rather it stays very compliant, even on medium and large obstacles, working to the maximum of its capabilities.

On the steepest and most technical sections of the climb, the geometry certainly helps: the vertical seat angle helps you get your weight in a more forward position, thus making it an excellent climber and allowing you to make the most of the excellent traction of the 2.25 “Nobby Nic.

After the climb we start again with the descent. On this track, steeper than the first, we had the opportunity to test the  braking behavior of the Sensor and I must say I was surprised: it is completely different from the old version. Even under heavy rear braking, the suspension continued to work almost as if nothing had happened. Long story short, it’s far more neutral than its predecessor. 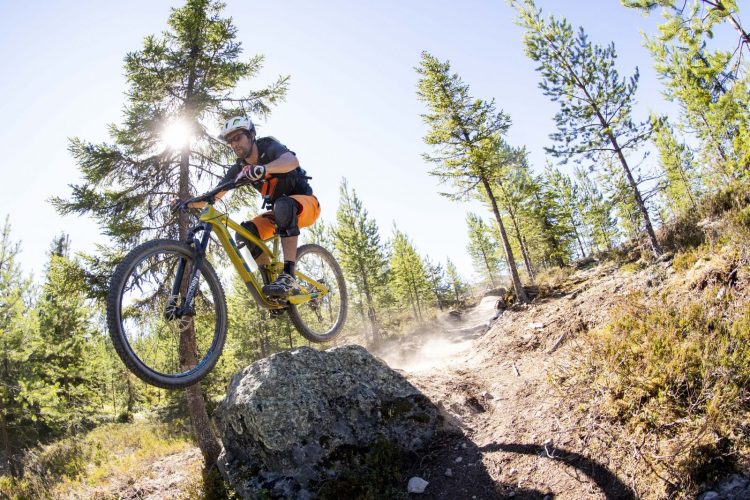 Another aspect that pleasantly surprised me was the maneuverability. With a steering angle that slack, on paper, the Sensor would seem anything but manageable, but in reality the bike handles really well, both downhill and uphill. The merit I think is due to the reach not being excessively long, a parameter that, together with the very vertical seat angle, makes the bike more compact, despite the extremely relaxed front end.

Despite being a first impression taken from a single day of riding, the new Sensor is immediately likable. An efficient bike when on the gas and on the climbs, but at the same time it is a lot of fun on the downhills. The new suspension eats everything up and on the up and surprised us with its prowess on the rough bits.