Scott introduced the new Genius in Aosta, Italy, a place littered with the perfect trails for this type of bike: a classic trail bike. With 150mm front and rear travel, and the ability to mount 27.5 Plus or 29 tires without having to change any components, although you may want to change settings in the flip chip depending on tire width and wheel size. 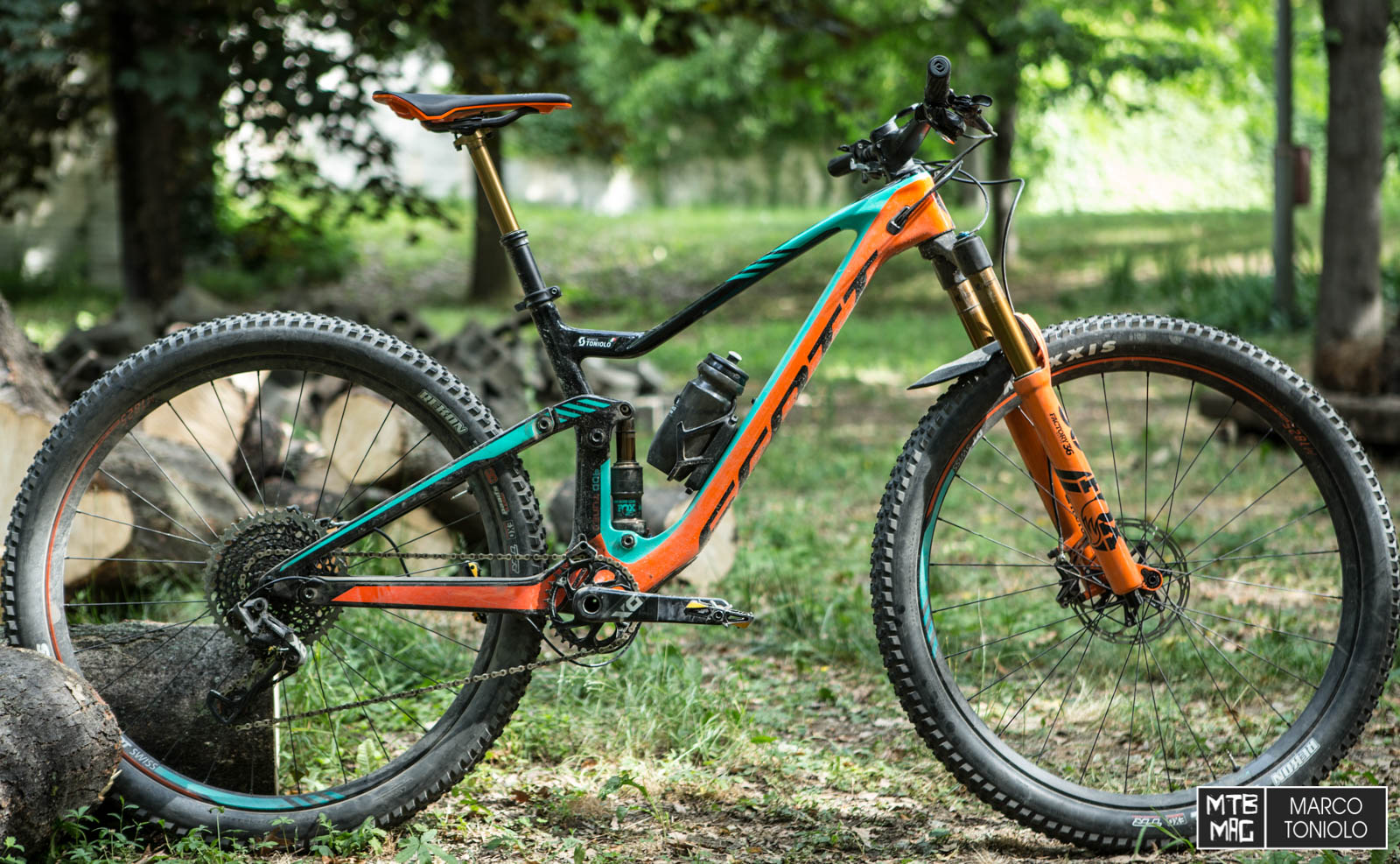 Scott revised the geometry of the Genius, modernizing it according to trends at the moment, ie by slackening the head angle, making the saddle tube angle more vertical, and shortening the rear end.

If you just take a casual look at the Genius, you’d think it’s just like the Spark, but unlike this one, the chainstay is interrupted between the main pivot and the rear axle. Essentially it’s a Horst link style 4-bar with a rocker link affecting shock rate and the Horst affecting axle path. 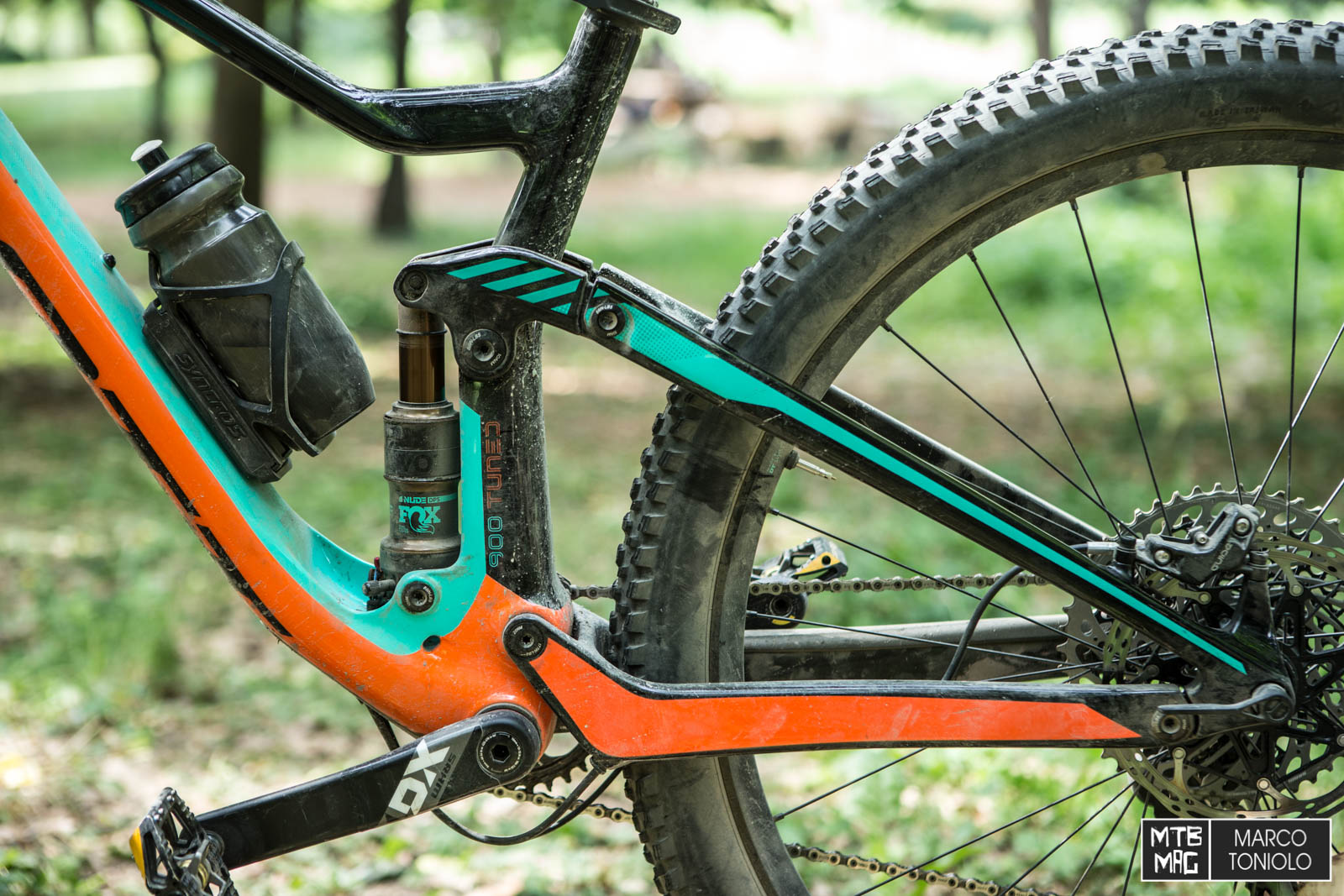 With the new suspension system, Scott changed the leverage ratio, making it high at the start of the travel and lower to the end, thus providing a fairly progressive rate. This way it’s very sensitive at the beginning of travel and progressive in the end. The rear end is cushioned by a Trunnion mount Fox Evol Nude. The Trunnion mount helps it to be a bit shorter and less bulky but it still has rather high volume for its size. 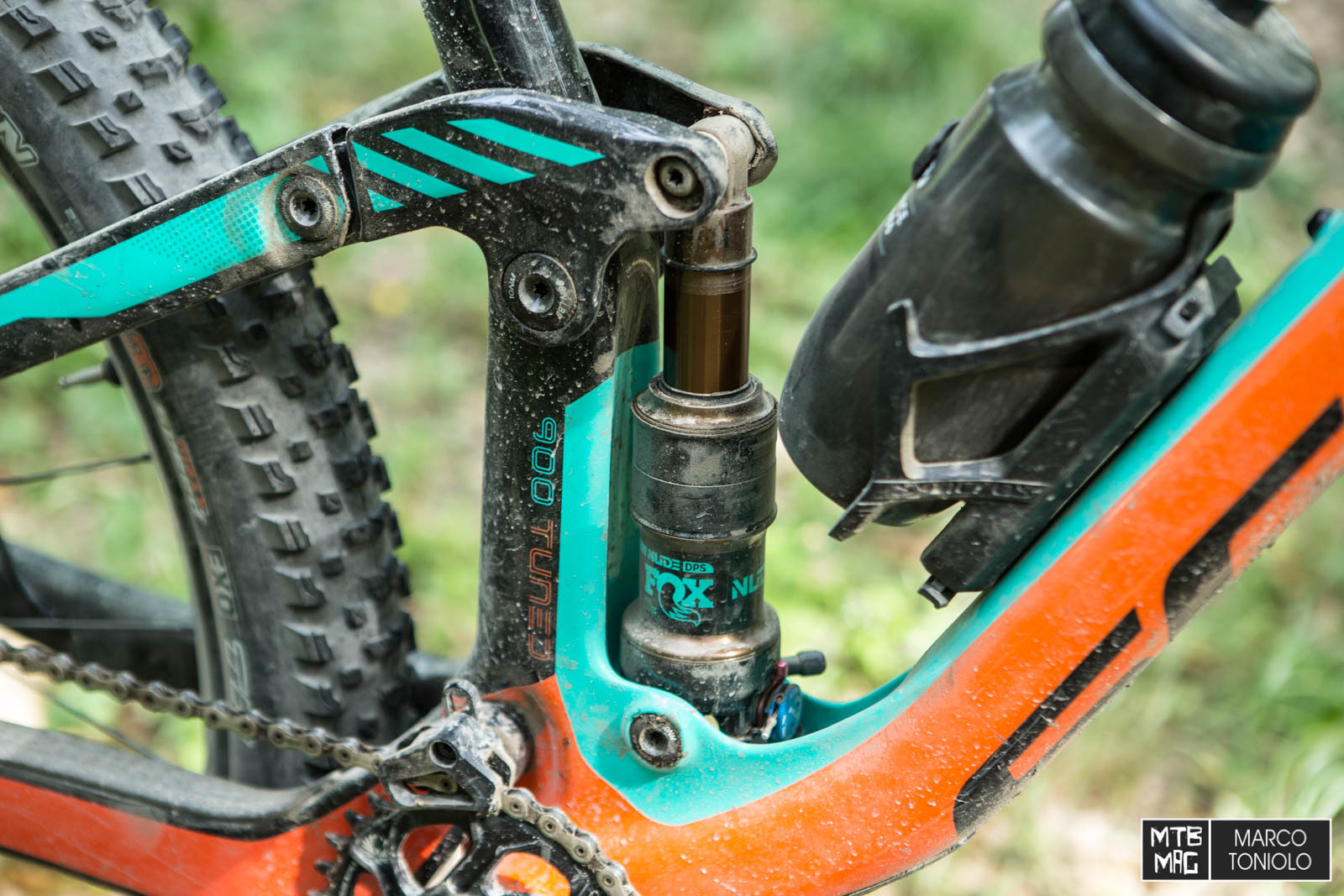 The Twinlock lever adjusts the fork and rear shock simultaneously from the handlebars. This is now a trademark of the Swiss brand, and also one of the reasons why they’ve built a loyal following. In the case of the Genius, the Fox Nude has two chambers, both open in the open position (150mm), while in Traction mode, the rear end is closed down to only 110mm of travel. As a result, the sag decreases, adjusting the saddle and steering angle by about 0.4º, while the BB sits about 5mm higher.

A small change was made to its handlebar attachment; its now integrated with the the Fox Transfer dropper seatpost lever. 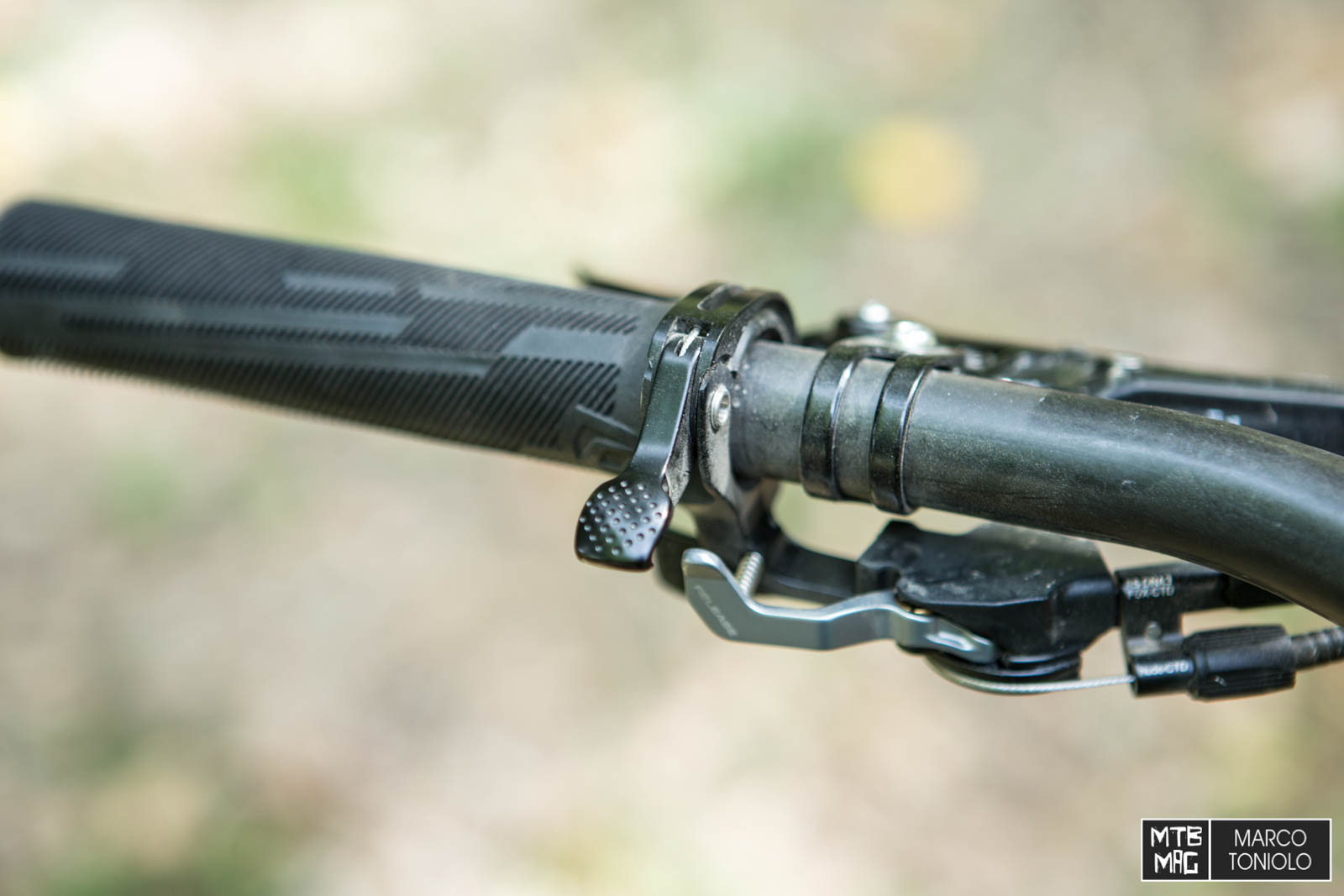 Another Scott trademark is the quest for light weight in the construction of the carbon frame, which is well exemplified by the weight of a medium sized frame with shock and hardware: 2,249 grams. This was made possible by a new chassis shape, which in turn is a consequence of the new suspension system, saving carbon reinforcements at various points, and redesigning the rear chassis in a way that metal inserts have been removed. In the photo you can see the old vs. new rear ends.

As for wheels, the new Genius allows you to change the size from 27.5 Plus to 29 without having to modify any component. To fit the geometry to different heights, just turn the flipchip at the top of the shock. 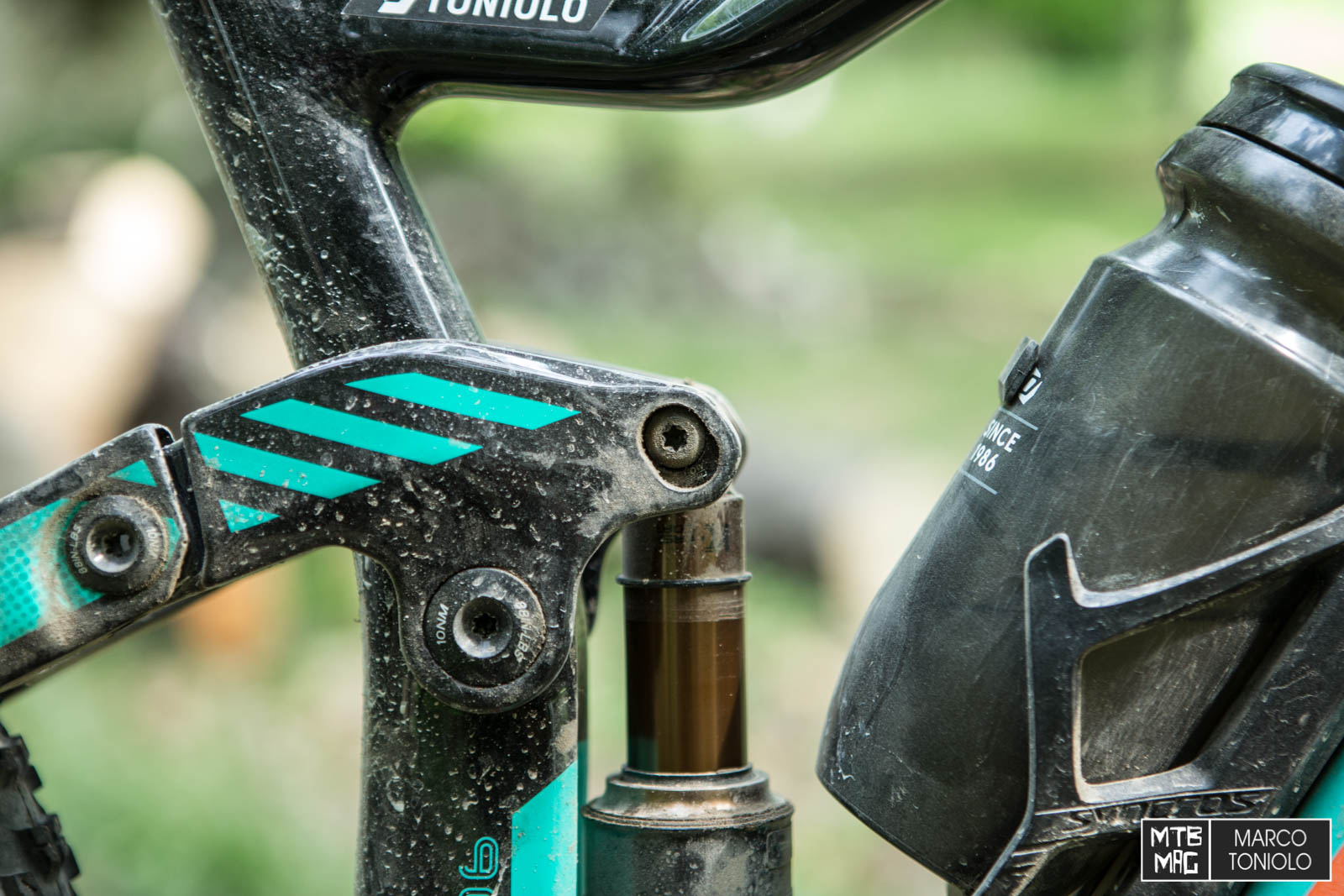 Scott, for years now, has been firmly convinced that generous width tires bring advantages to all riders, and that shows with the stock tires, a Maxxis Rekon 2.6″ for 29″ and 2.8″ for 27.5 Plus. The rim has the same extrusion/profile, that is, a DT Swiss with a 30mm internal channel. 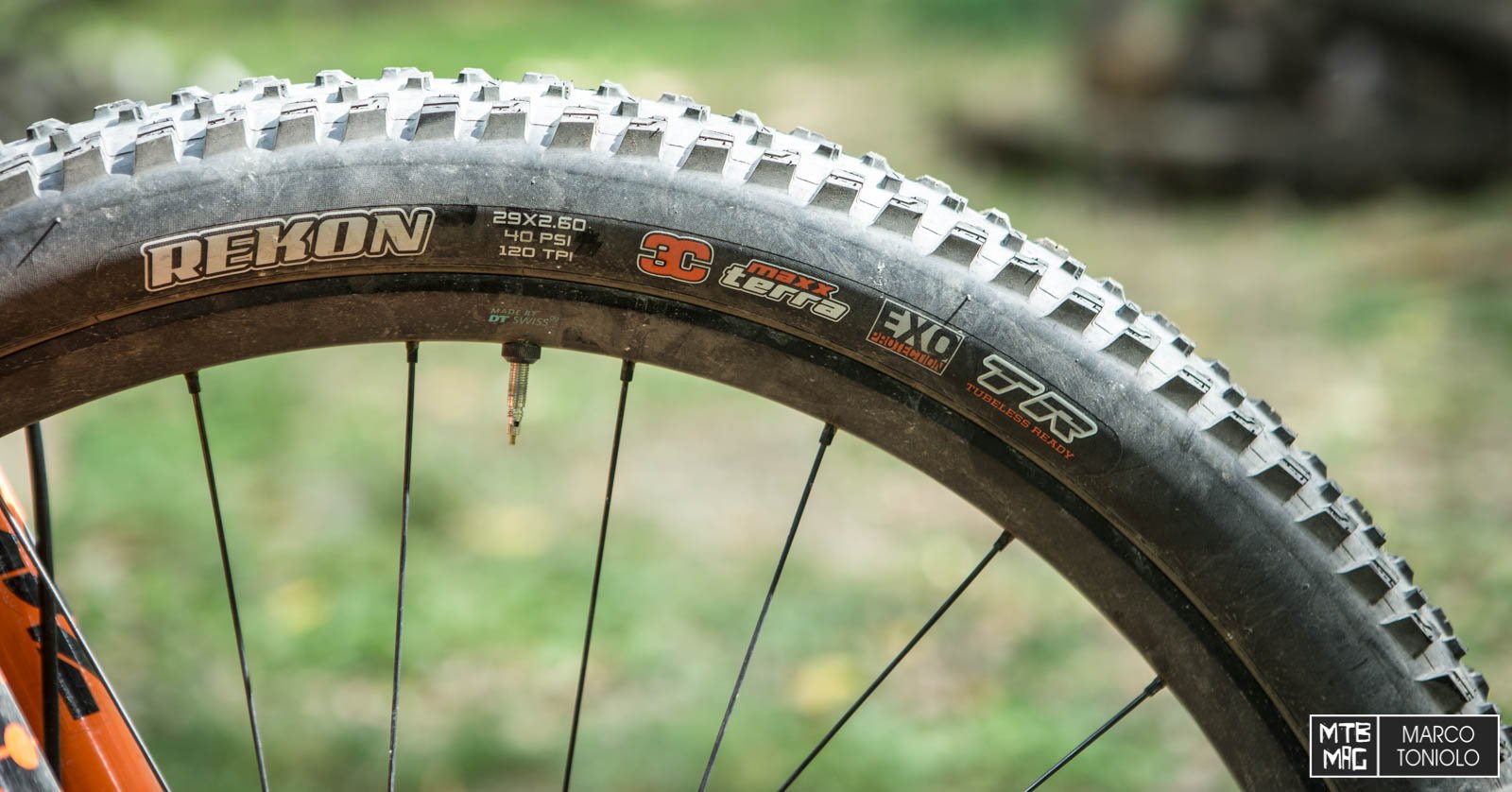 Loads of tire clearance regardless of tire size/width. 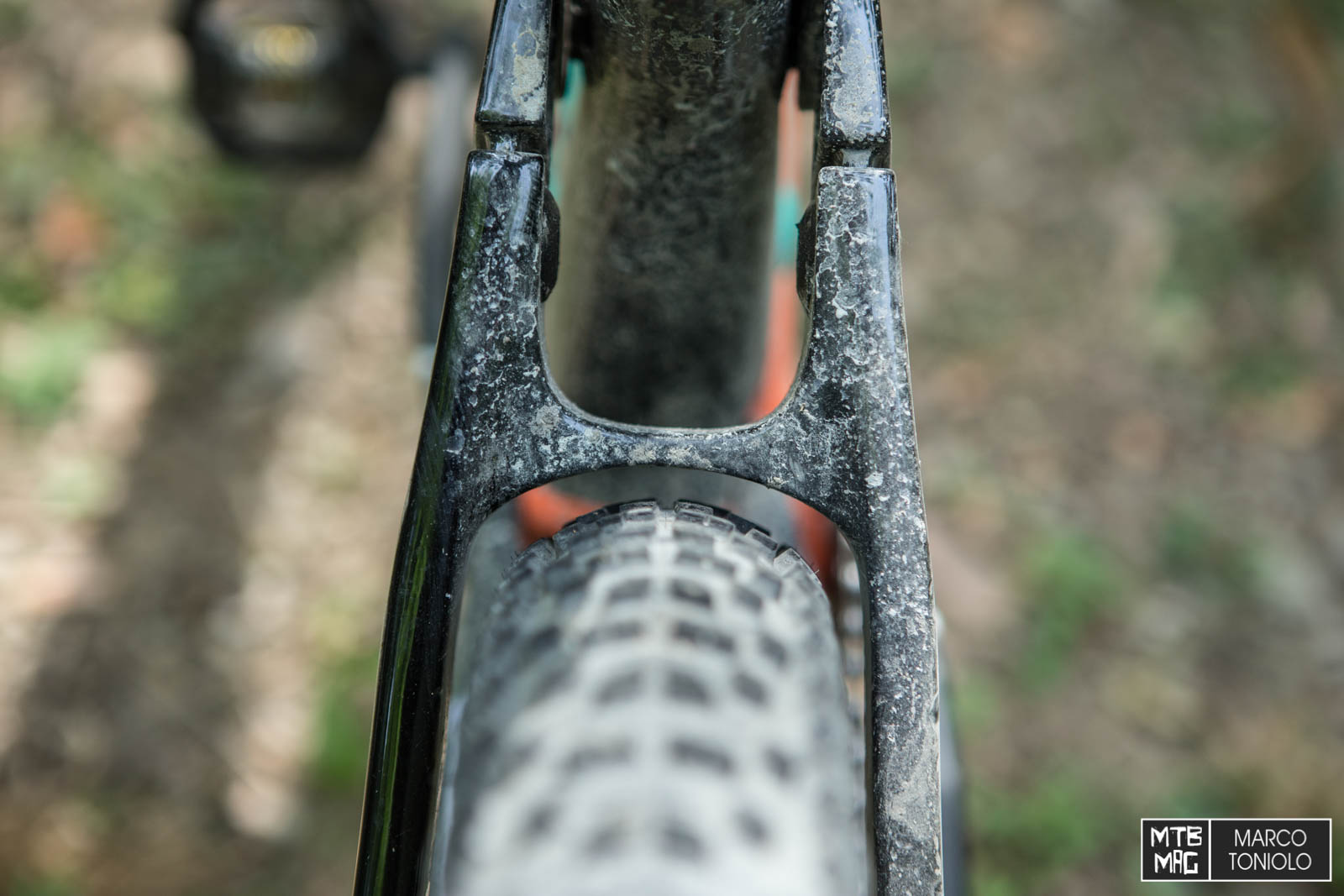 Very interesting is the integrated Synchros Hixon IC handlebar. This is a carbon fiber cockpit with integrated stem, in which the length of the stem is determined by varying the angles of the bar. The standard, which you see in the picture, is equivalent to a 50mm stem, while two other versions are available: 40 and 60mm. 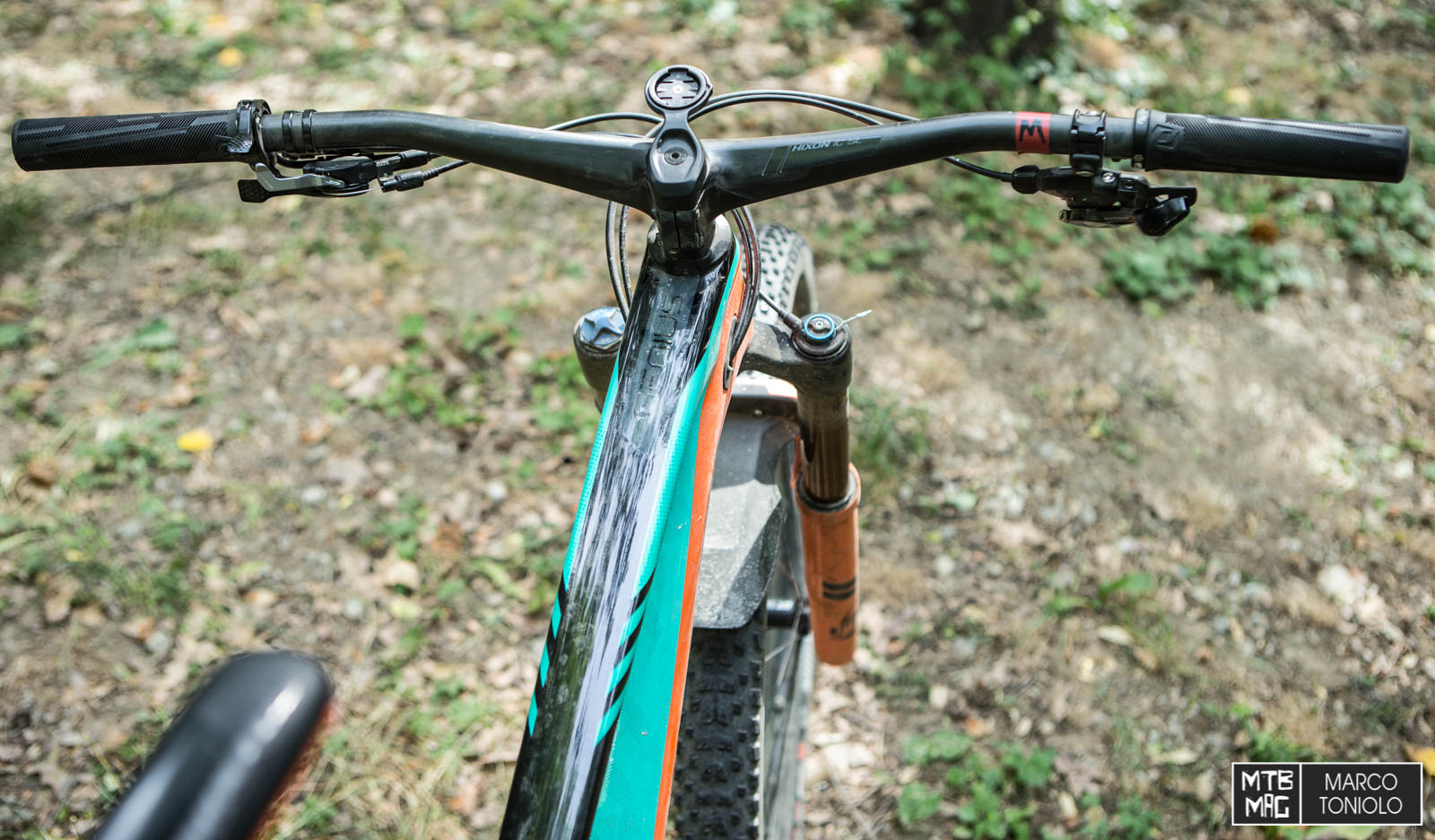 The weight savings is remarkable, in fact the Hixon weighs only 290 grams, with a full width of 780mm.

For the modest figure of 14 Euros, Synchros offers this fender for Fox 36 and 34 Boost.  A note about the fork: only the Genius Tuned is spec’ed with a 36, just for a matter of colour, the orange that Fox provides only for the 36 and not for the 34, which you can find on the rest of the line-up. 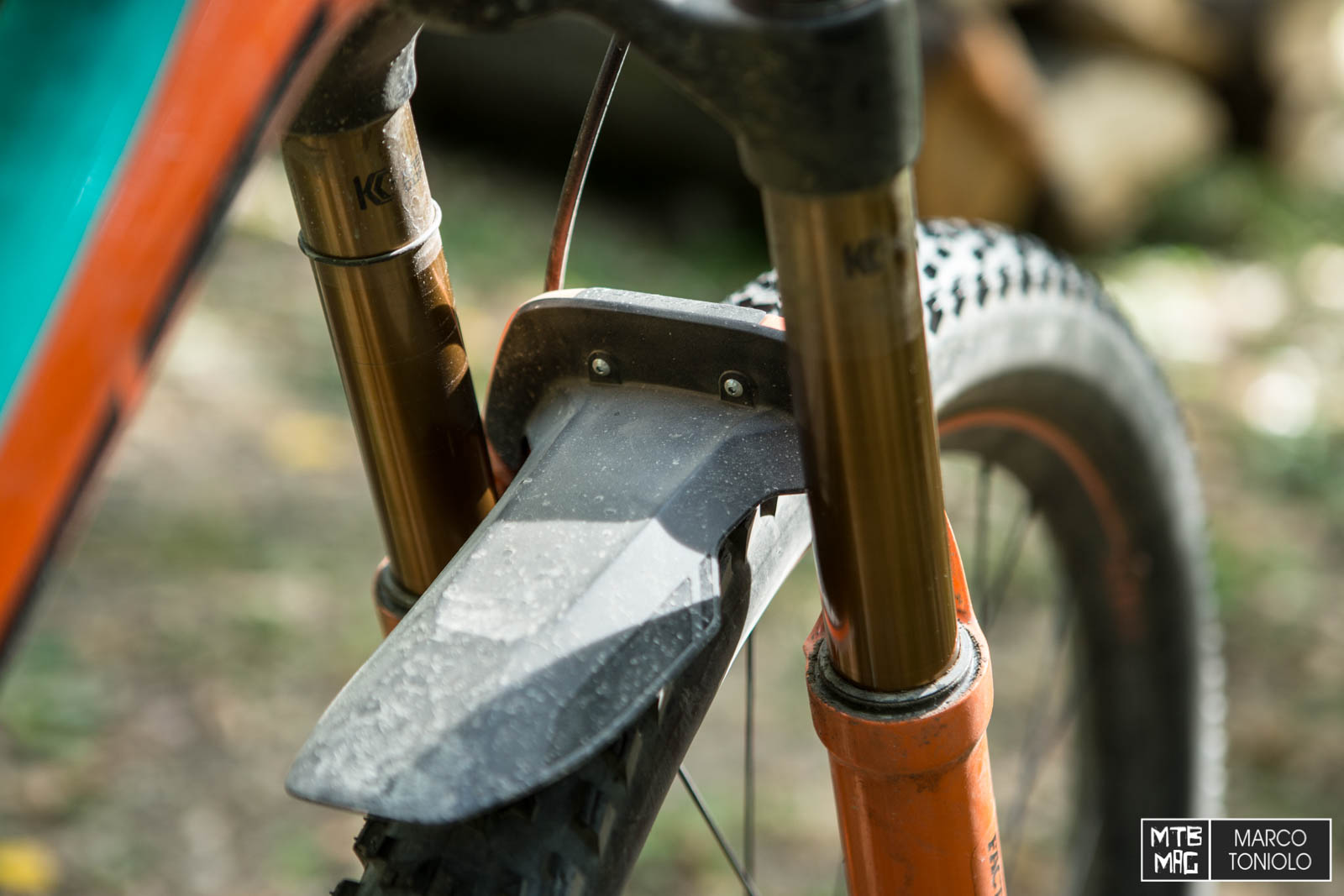 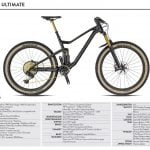 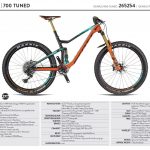 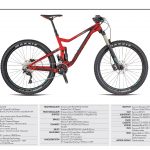 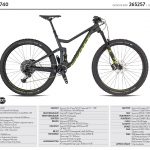 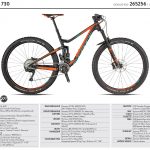 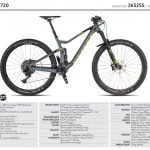 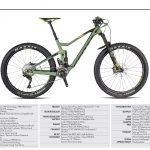 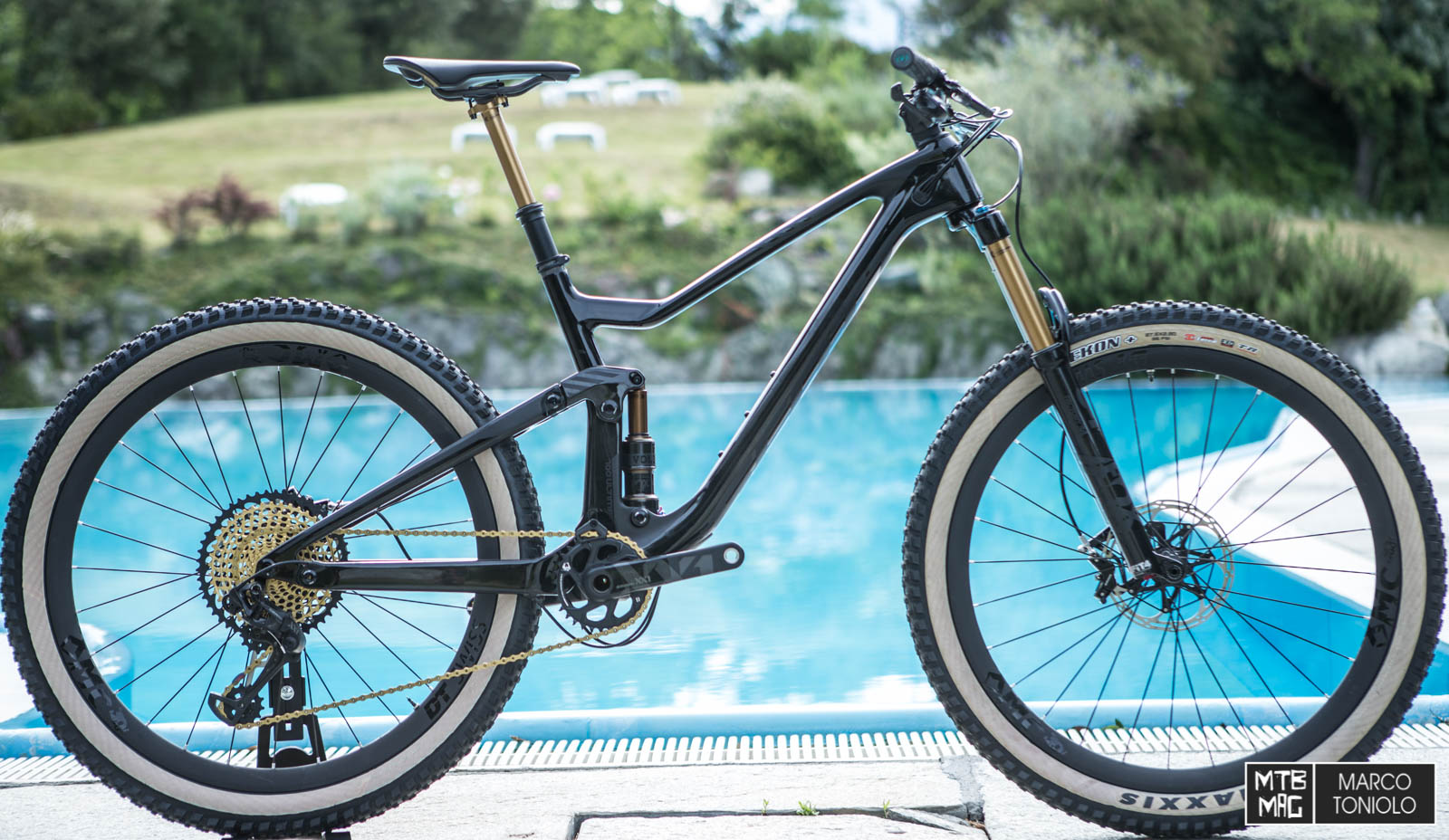 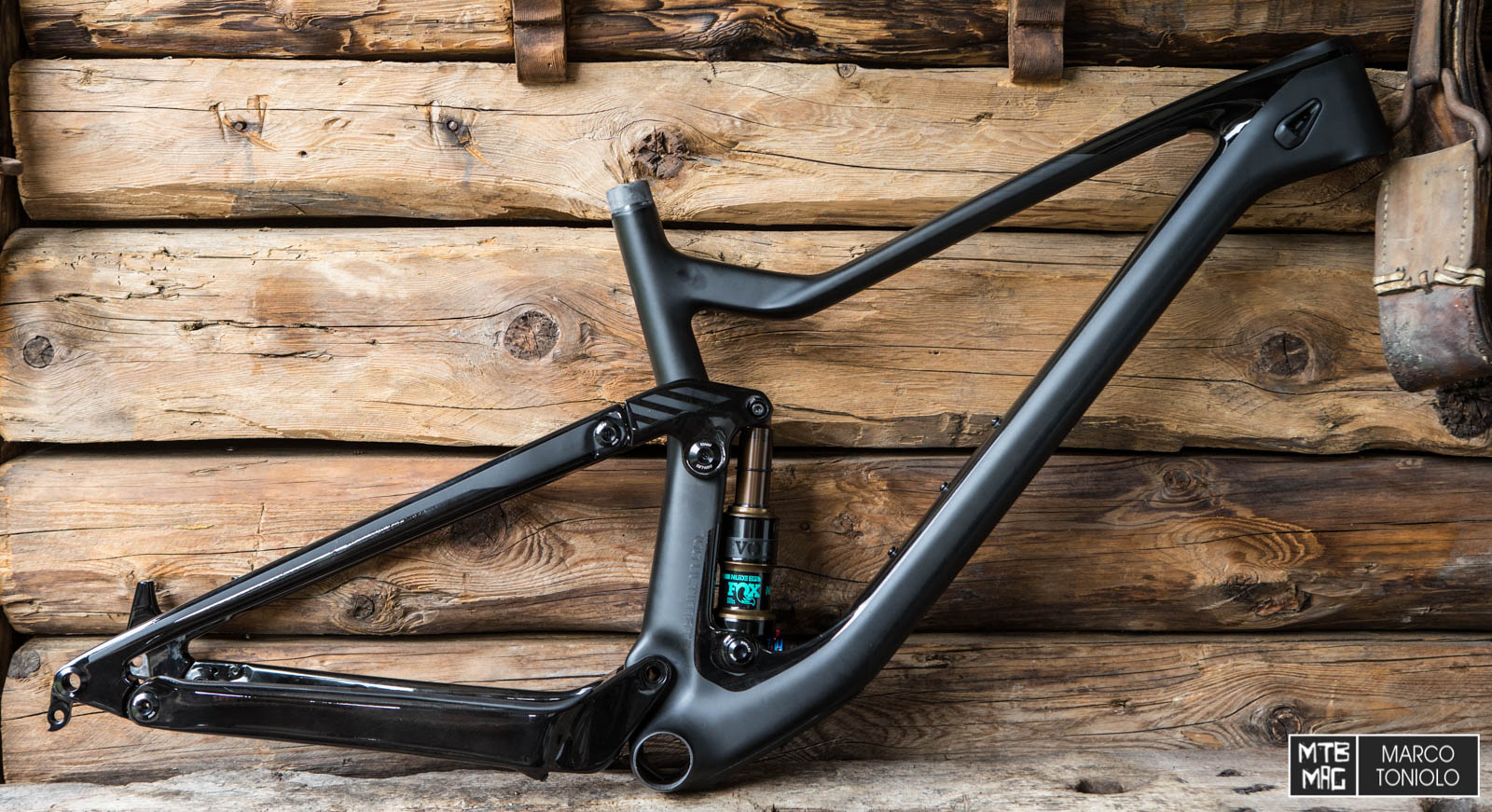 I had 3 days to try the Genius on the Aosta trails, which were a real surprise both in quality and in altitude. Very flowy and fun, they also commanded some respect because of the very dry and dusty soil, which offered little grip and limited control. The highest point was the 2600 meters at Punta Chaligne, then we descended to the 500 meters of Aosta, along with people like Nino Schurter, Remi Absalon and Thomas Frischknecht. Others, such as Brendan Fairclough, did not climb up to the top, but gave us a show on the downhills, as you can see from the video below. The whole tour was guided by the Aosta Valley Freeride guys.

So how about the bike and its behavior? In three days and on new trails I obviously did not get a full test, but I most certainly began to understand the character of Genius. This is a trail bike, not to be confused with an enduro bike, especially “because of” its excellent climbing skills. The saddle position is pretty central and thanks to a vertical seat tube angle, it is very proficient when pedaling. Forget about the super slack seat angles typical of Scott in the past, here we are talking about a machine that climbs well everywhere, from dirt roads, to smooth, to technical trails. The Twinlock affirms its practicality with regard to suspension control, although it adds two cables to the cockpit.

The new suspension system is no longer so dependent on the shock lockout so it eliminates bobbing more than the previous version. The kinematics that Scott have designed are not completely free from pedal bob, but is still very effective in the Traction position. 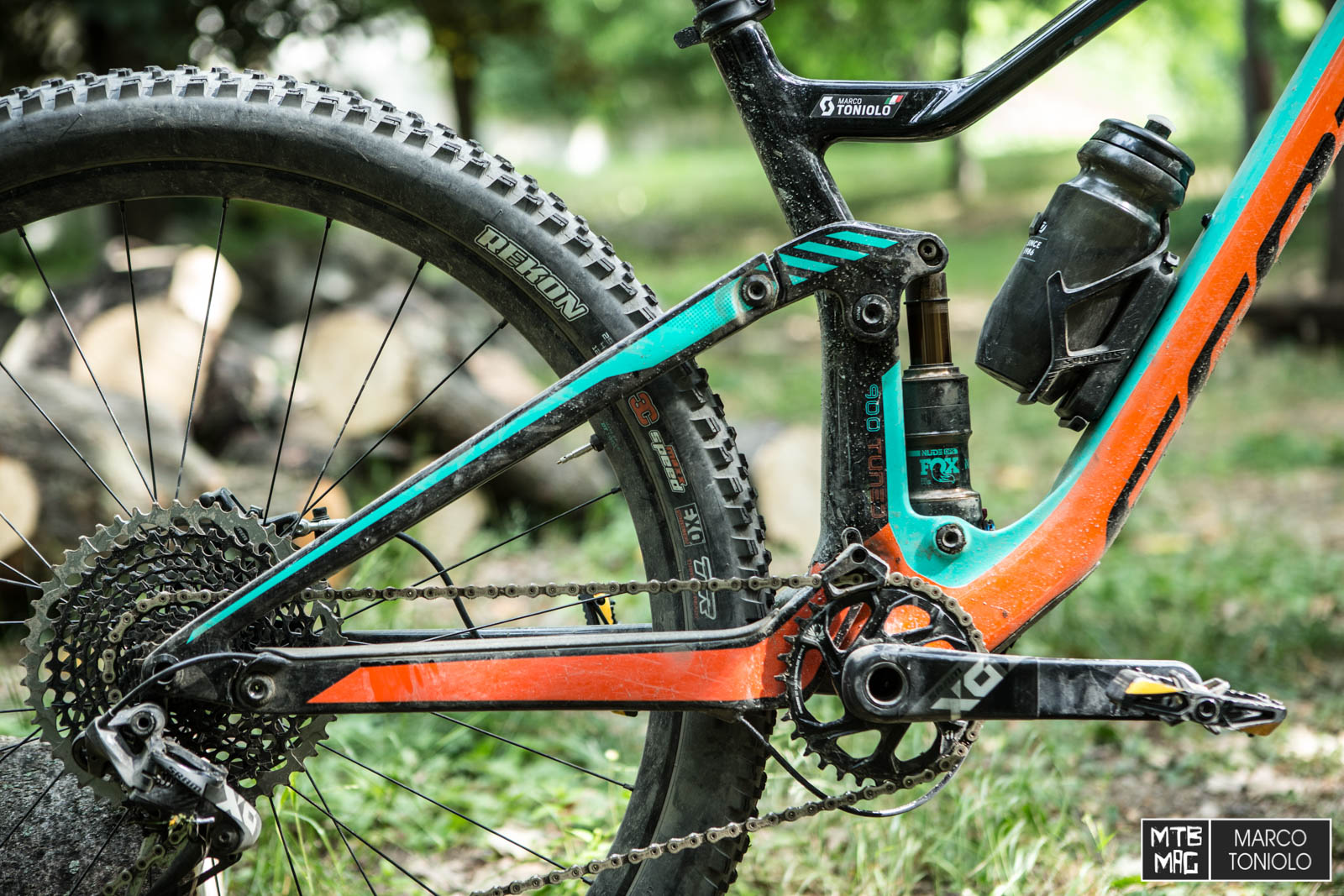 Descending on the new Genius is nothing like the old model: it’s sensitive to small bumps, it becomes progressive on the big ones but above all it has a geometry that makes it super agile (with 27.5 Plus wheels, more soon) and stable on fast sections. In short, a trail bike that’s up to pace with the times, but with one peculiarity: the generous tire width.

Personally I’m not a fan of the plus tires, because I find them clumsy, heavy and / or overly prone to flatting. So, the first two days, I preferred to ride with 29-inch wheels and 2.6-inch tires, a “not quite Plus” width, but approaching it, and it still far outweighs that with which I usually use when I’m riding a 29, (~2.3 “). During the first day I struggled a lot to find the right pressure, especially because the terrain was very dusty and slippery. During the first 5 minutes of descending I was really struggling to find the right lines in the corners, and I decided to lower the pressure. Within 200 meters I flatted up at the front: a pinch-flat, with two slits – one at the top of the casing and one near the bead by the rim. Thanks to my Dynaplug I repaired the tire (and a tire of a Spanish editor, who suffered my same fate, but at the rear) and I proceeded on the descent with caution. In the photo you can see the two plugs coming from the rubber at the puncture points. 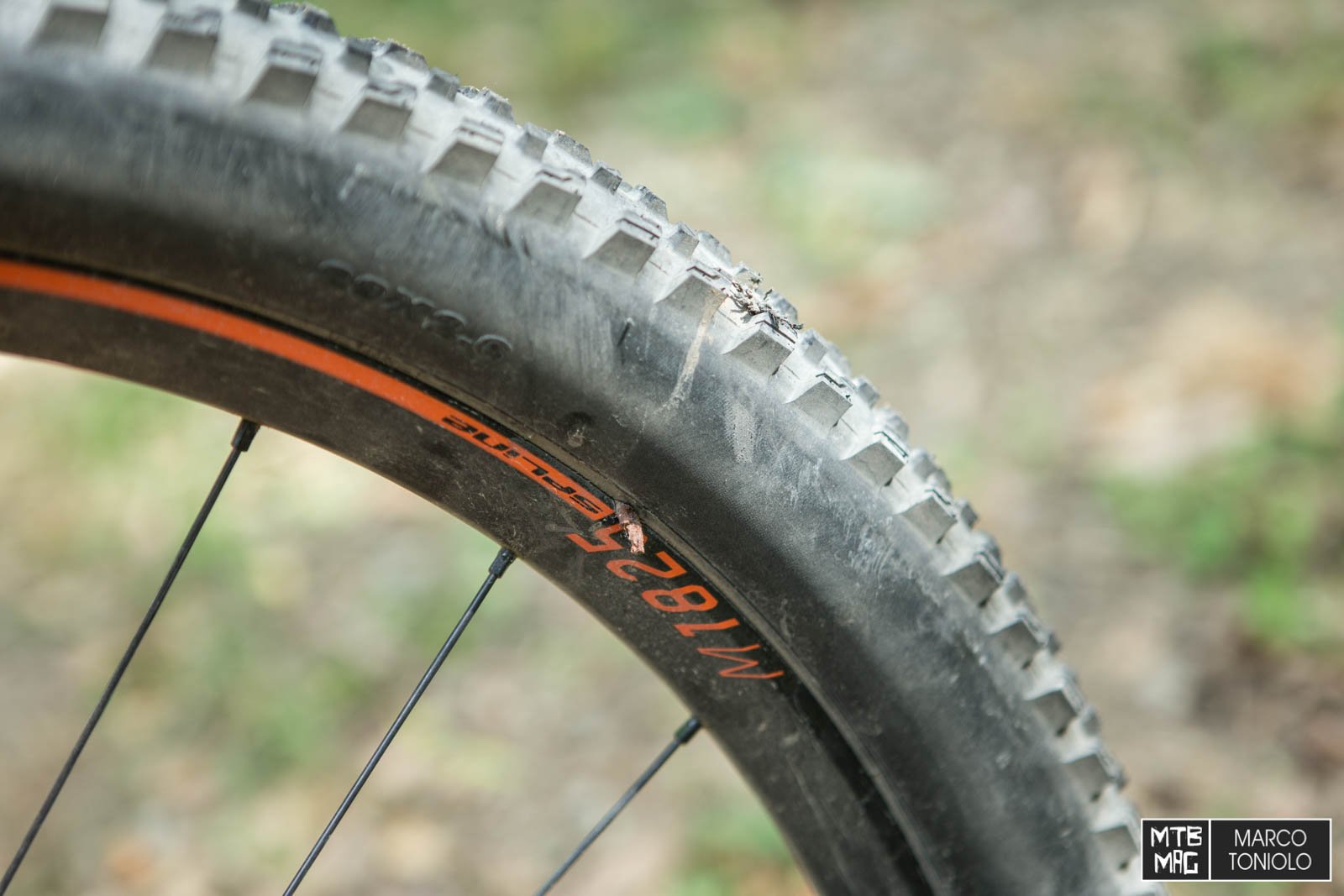 On the second day I ran the rear at 1.5 and the front at 1.3 bar. Since Aosta is at 500 meters, and the ride peaked at 2600m, the tires hardened more than a little, resulting in a loss of traction and a tendency to bounce. I lowered the pressure with little memory of the previous day. However, I just never found a nice, happy medium. The tires were either too clumsy or too nervous. Finding the fine line between skating around and pinch flatting becomes a chore, especially when you’re dealing with highly varying altitudes and the inherent effect that has on tire pressure throughout your ride. 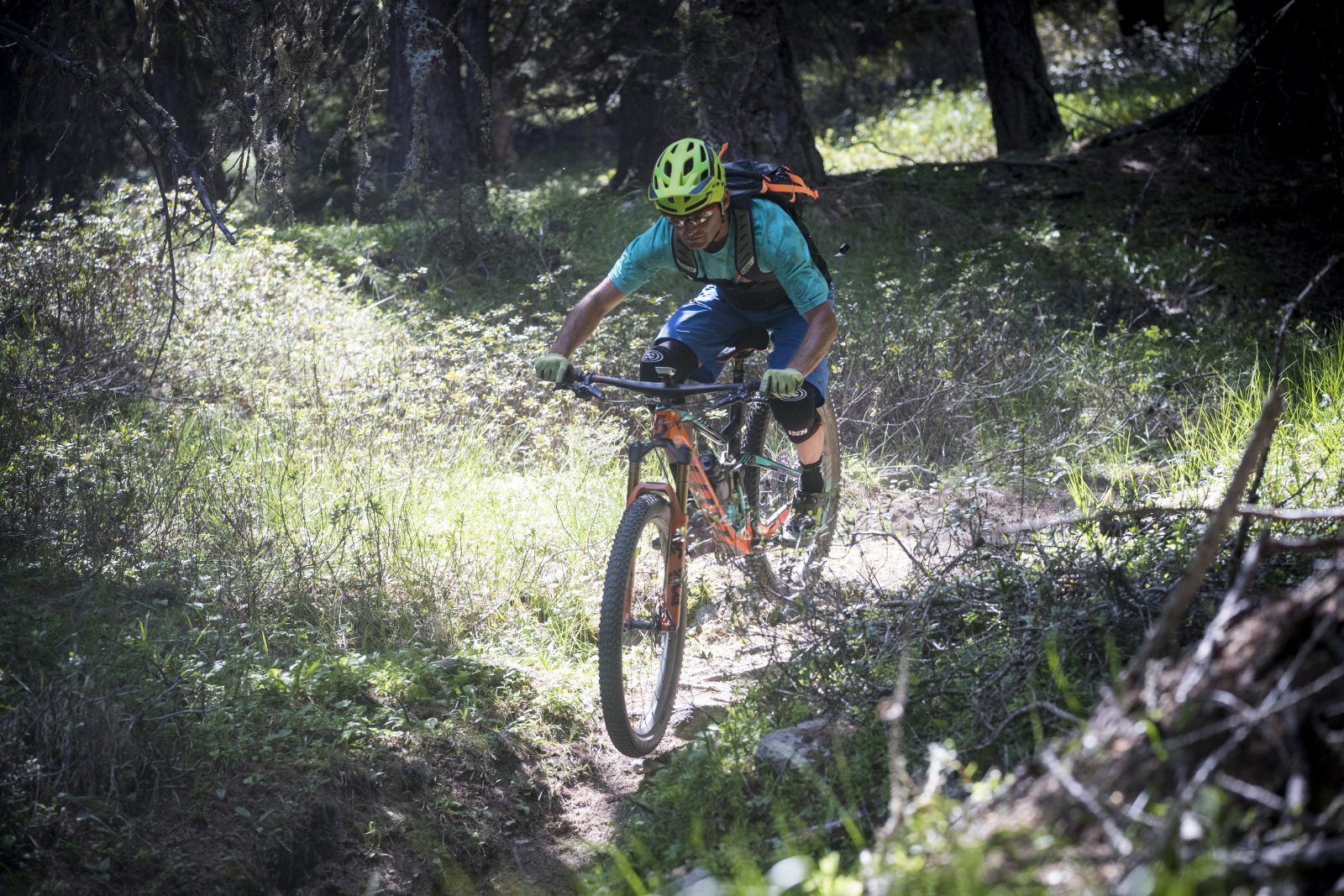 On the third day I opted for the 27.5 Plus: the rubber is identical to that of the 29, only the tire width changes, from 2.6 to 2.8. In this case, I have to say that I found a better ride, with a more reactive bike that was easier to control in the tight bits, but at the same time it provided safety on the fast sections. The pressures were at 1.3 in front and 1.4 out back. The uphill traction was very good, but I was wondering if I would not have had the same effect with a normal 29er tire, with less drag on the paved sections and better traction/handling in the downhill corners.

In short, Scott believes in plus size tires. The positive side of all this is that changing tires is a simple and inexpensive operation that also leads to fun and interesting experiments. If I was to purchase this bike, my choice would be for 29-inch wheels, on which I would then change the tires to 2.3/2.4 width. It is no coincidence that Remy Absalon runs that combination on his bike.