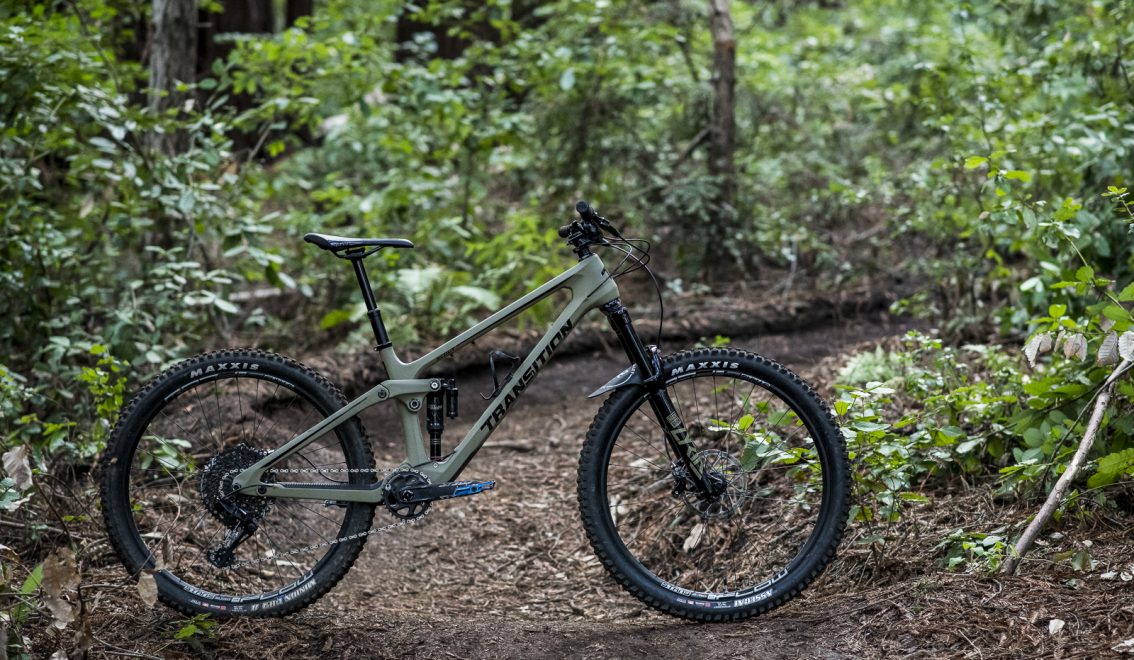 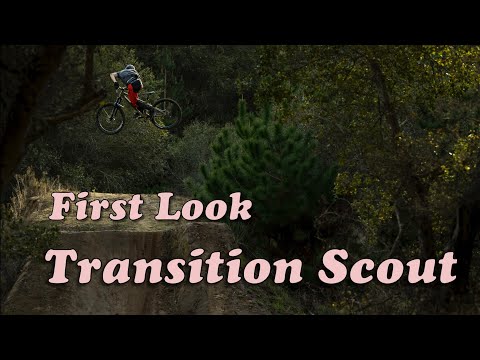 Many brands claim to be for riders, by riders, with varying levels of truth to the statement. The one infamously ‘rider owned’ brand that truly embodies that ethos is Transition Bikes. The company is made up of people who really like to ride, and that’s confidence inspiring when you’re looking for a new bike. We’ve been spending a good amount of trail time on the new Transition Scout, and are here to share some details about the freshly revised bike. Read on for details, and a have a look at the video for an overview of the bike. 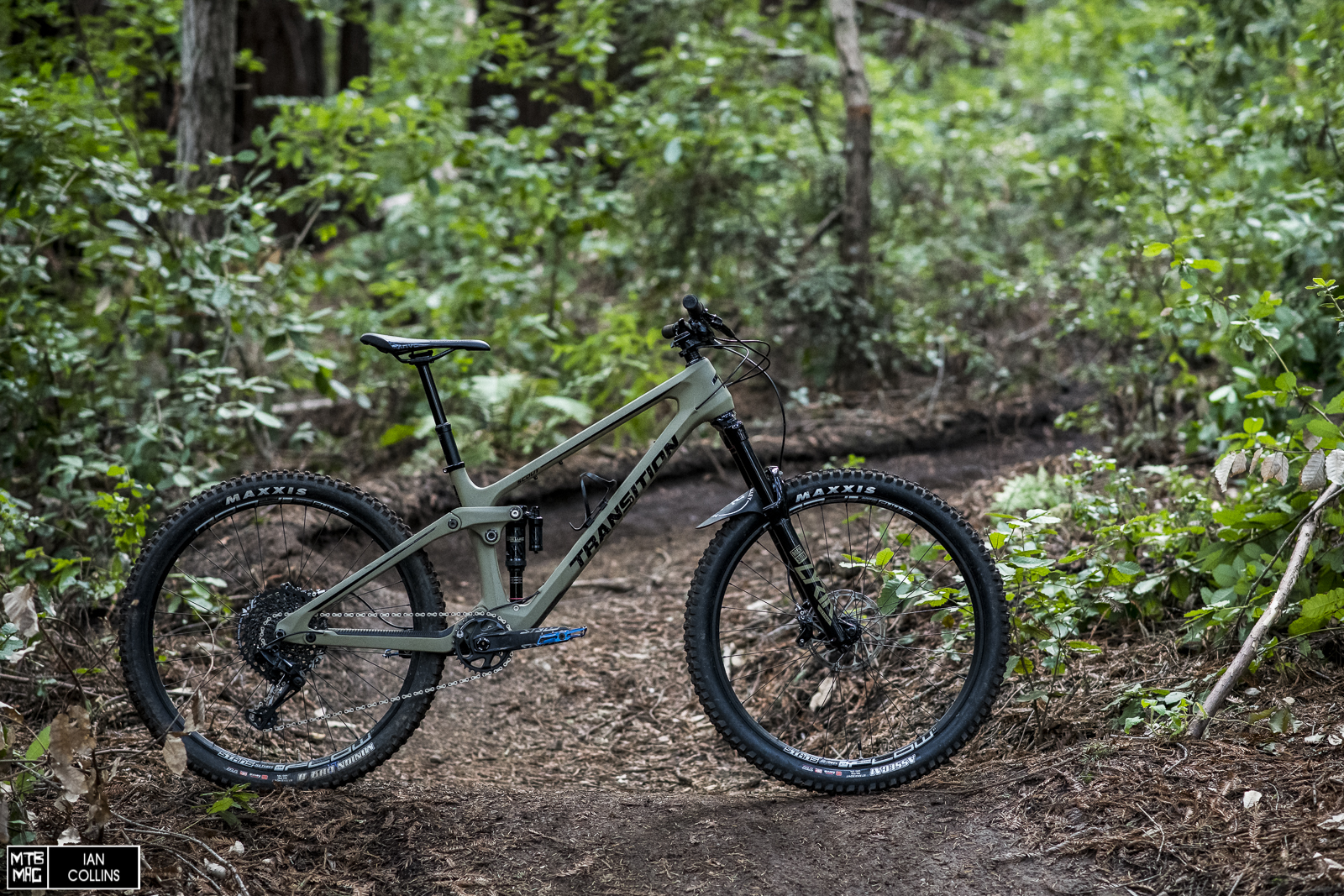 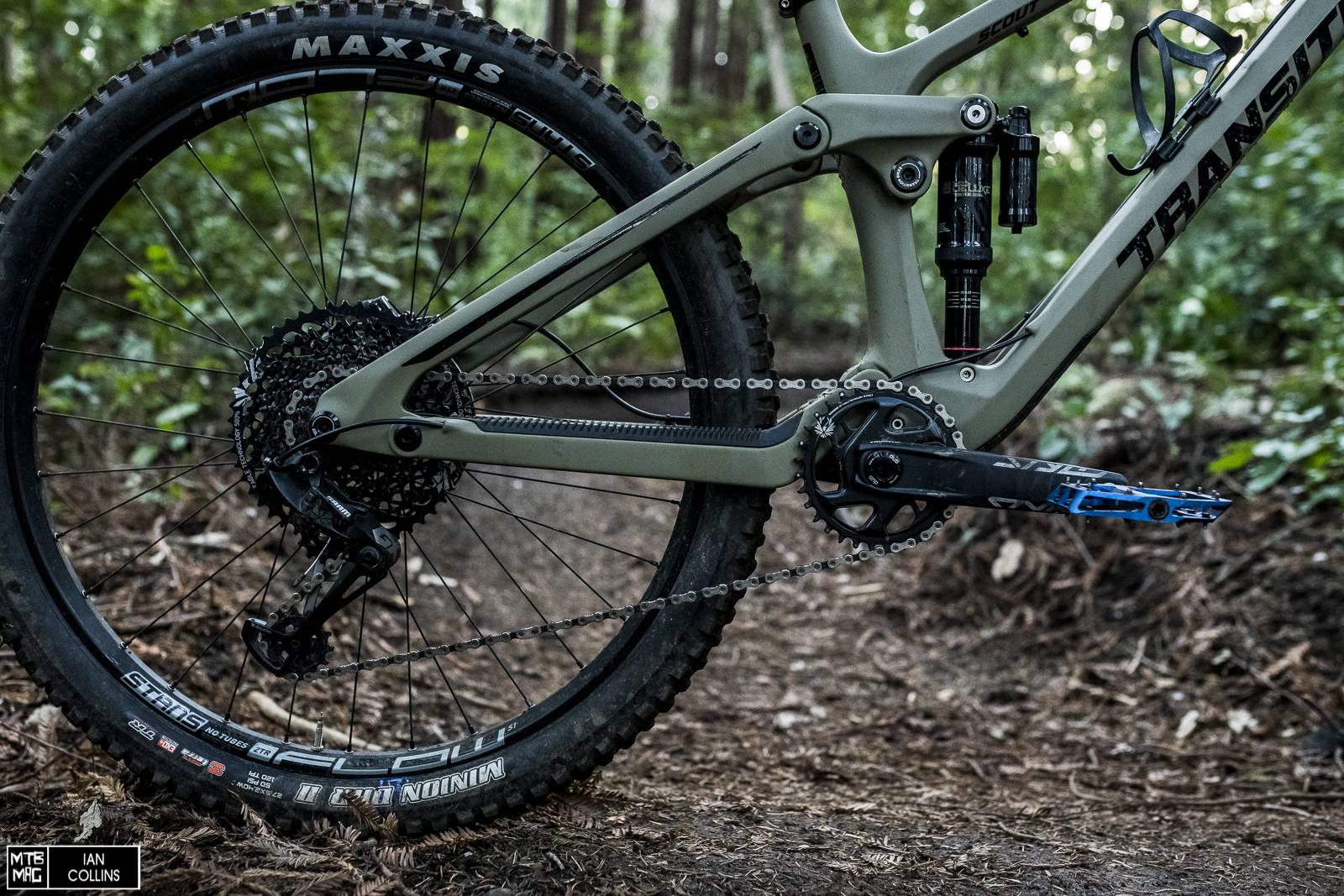 The new Scout sports more chiseled lines and aesthetics than its predecessor, and we quite like the new industrial design. A more compact and tidy looking rocker link helps actuate the horst-link suspension platform. 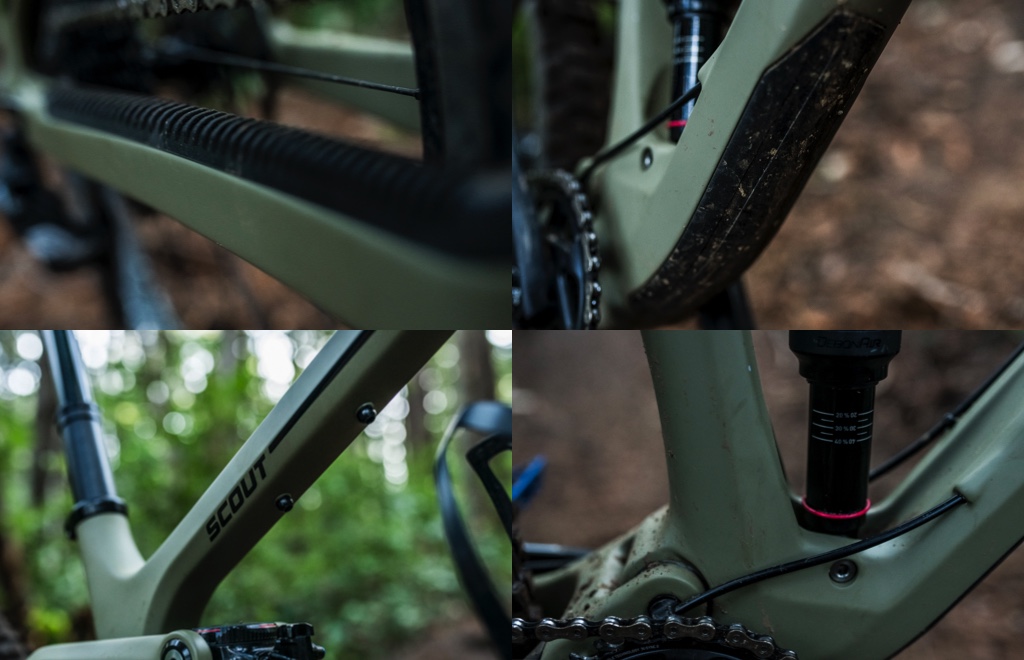 The attention to detail regarding the little bits, reminds us that Transition’s engineers actually ride, therefore knowing what they’d like to see on their own bikes. Downtube and chainstay protection is clean yet effective, and the plastic cable guide on the pivot works great. The top-tube accessory mount is a nice touch for adding something like this to your bike. 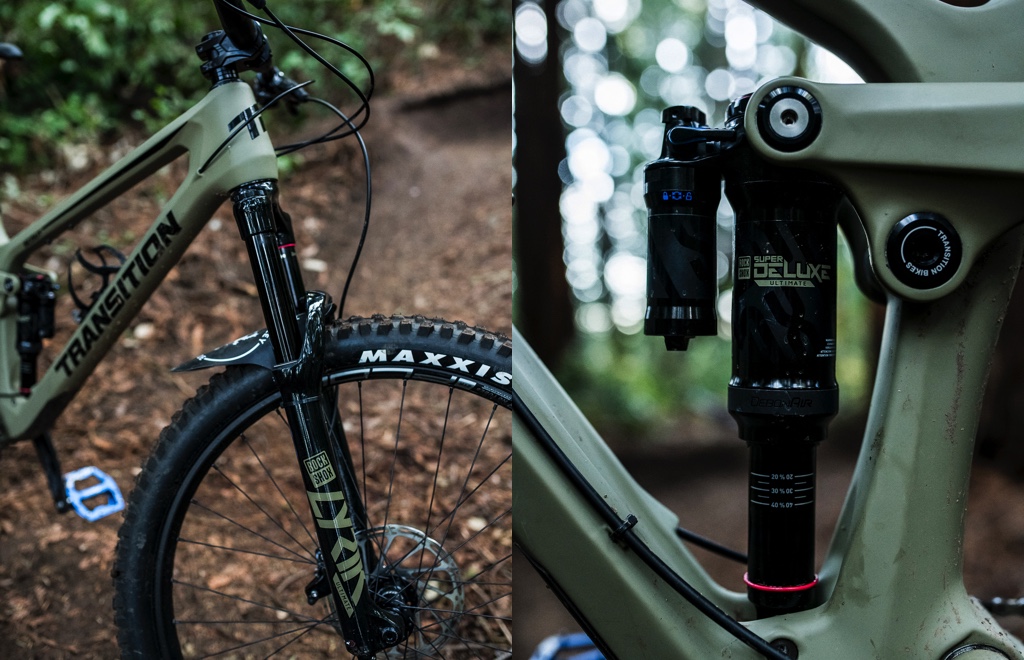 A 150mm RockShox Lyrik Ultimate holds down the fort in the front of the bike. We’ve been using 3 volume spacers inside, but as we like to jump deep sometimes, we’ll likely add one more. The well proven RockShox Super Deluxe Ultimate keeps things supple out back, and the 140mm of travel seemed to give a fairly bottomless feel. 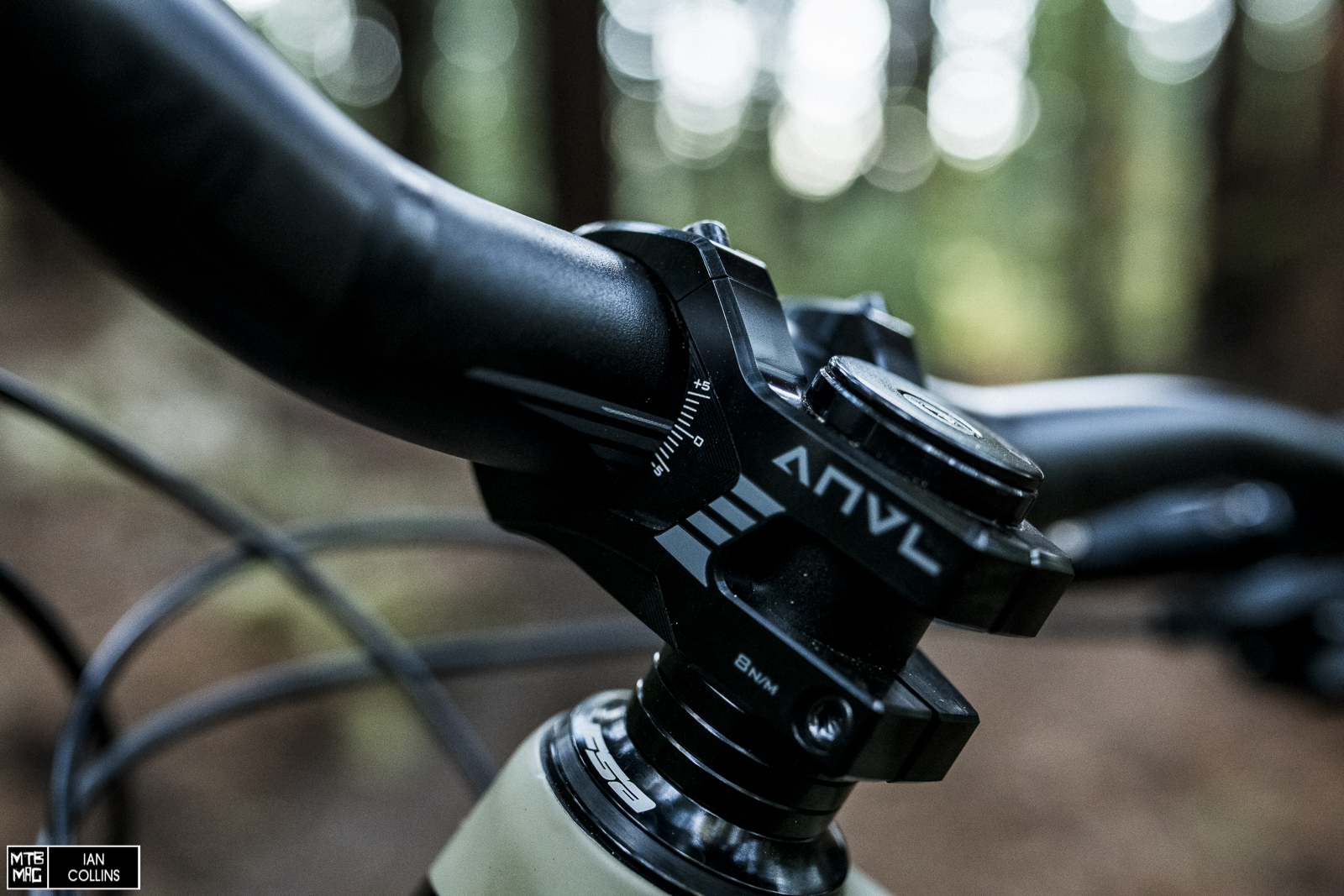 The Anvl cockpit was aesthetically pleasing, but was hard to setup at first…That was until we found the clever angle guide laser etched on the back of the stem, and corresponding line on the bars, keeping the frontal view of both bar and stem nice and clean.

Code RSC brakes are a welcome choice of spec, as we’d be disappointed to see anything less on a bike this capable. That being said, for how rowdy this bike can get, a 200mm front rotor (rather than 180mm) might not hurt.

We absolutely loved both the lever ergonomics, and the actuation of the OneUp dropper post. It’s a great overall design with user adjustability in mind and loads of travel given its overall length. 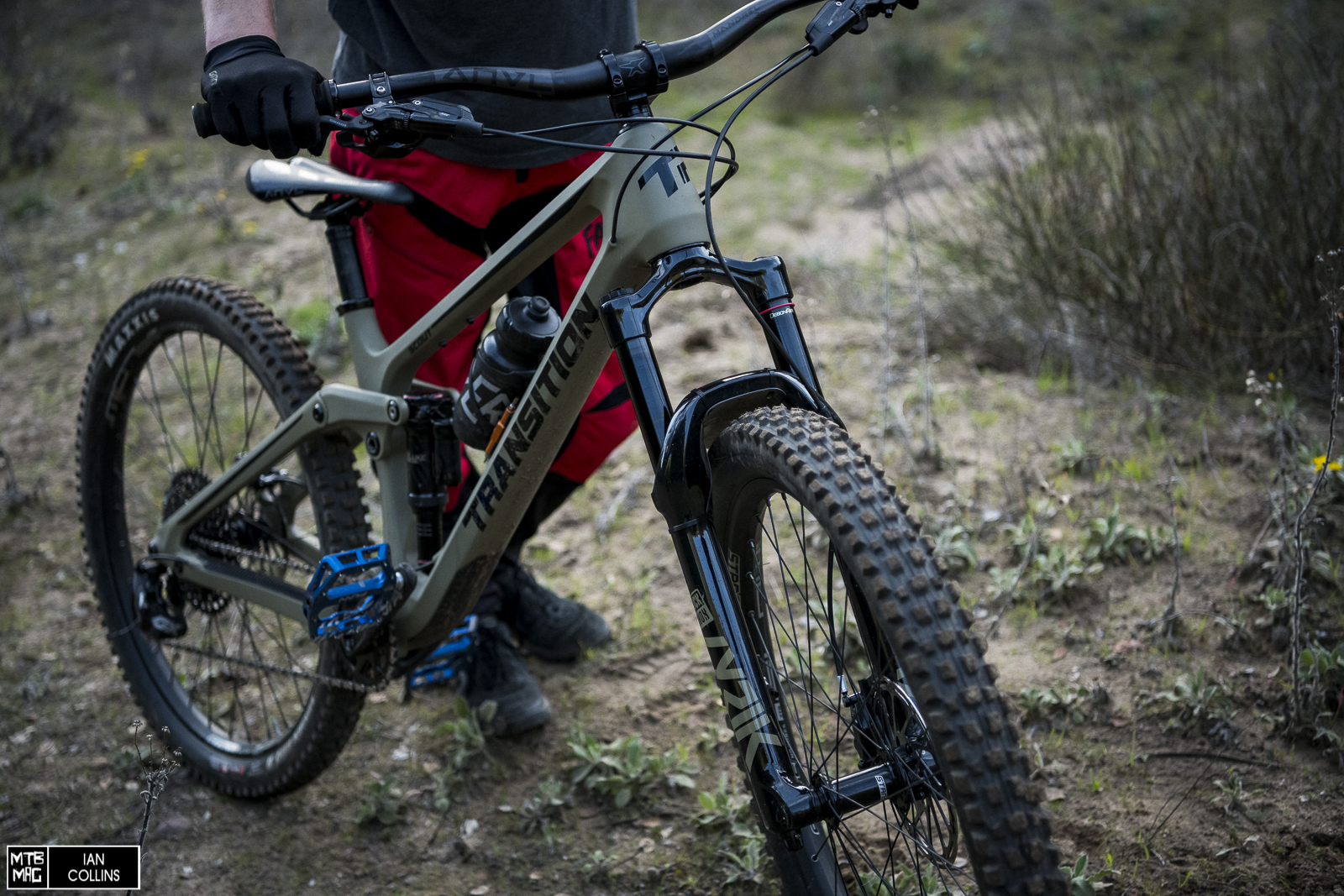 In comparison to the prior Scout, the new bike features a slacker 64° head tube angle (prior – 65º), the bike reach is 10mm longer, has more tire clearance, and a broader sag range. Transition says that with 25-30% sag, the new Scout has a better wheel path that is less likely to hang up in the middle of the stroke. Speaking of rear suspension, the Scout gets bumped up from 130mm to 140mm. The Scout is one of the first 27.5″ wheeled bikes we’ve tested in a while, and we were instantly reminded how nimble, and fun the step down from 29” can be. In regard to pedaling up to the trail entrance, it’s inherent that larger wheels excel, for a plethora of reasons. That being said, when comparing the Scout to other 27.5″ bikes, (or even some longer travel 29ers) the bike climbs really well. A short chainstay, longer reach, and 77.2 ° (medium) seat tube angle puts the rider in an upright and effective position for getting to the top. 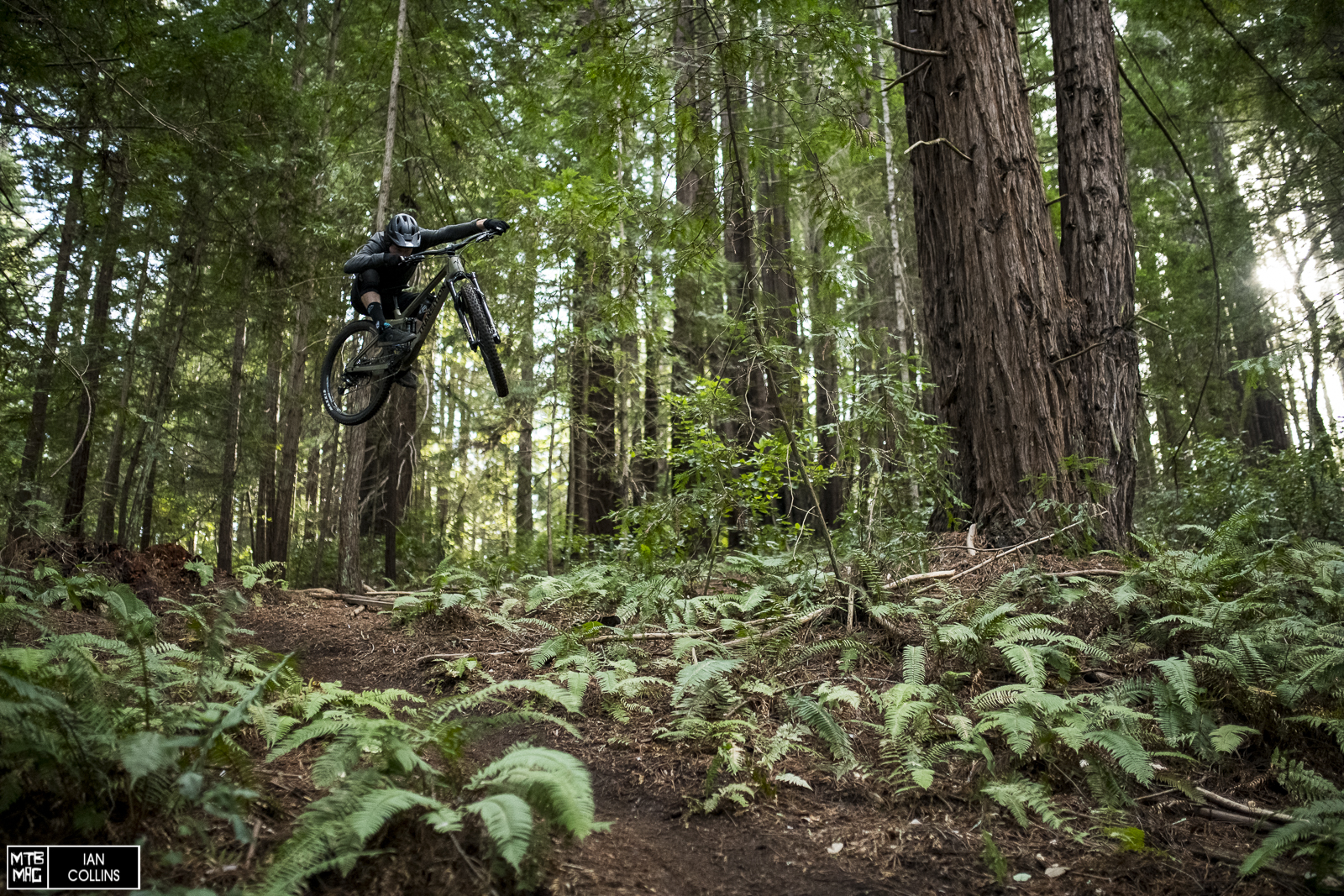 Airtime is the Scout’s friend, and its stability is likely why. Once we got our suspension settings dialed in, we found that there’s a lot of pop in the Scout’s Horst-link platform. A simple pull up on the bars sent us to the moon on jumps that typically feel a bit un-eventful. Slashing and sliding aside (which the bike loves), the Scout is a very capable descender. In the loose and steep bits, we felt in control, and when big hits reverberated through the bike, the suspension platform gave us a feeling that more than just 140mm was doing its duty out back. We’d be curious to try this bike in its other travel combo. By switching from a 57.5mm stroke rear shock to a 62.5mm, you can bump the Scout from 140mm to 150mm rear travel. At that point, you’d also want to swap your fork’s air spring to 160mm or 170mm travel. At any rate, that the bike can do this is a testament to its versatility. The mid-travel, medium wheeled bike begs to flicked about during loose descents, and seems not to mind the pedal back up in the slightest, so hats off to the Scout for reminding us why we love mountain biking. If you’re someone looking for the mountain biker’s mountain bike, the Scout could be the hot ticket. It’s a bike that is aimed primarily at fun, less so at racing the clock.