Late in the season last year we received a 2017 Specialized Enduro S-Works with 27.5″ wheels. We had ridden the bike briefly at its launch, and our initial impressions were good, but our size Large was rather small in terms of fit, relatively speaking. After catching wind of our grievances with sizing, Specialized looped us in and let us know that the 2018 Enduros would be around 15mm longer in the top tube. Although the sub frames look nearly identical, they aren’t…A handful of other changes were made as well. As we currently have both 2017 and 2018 bikes on hand, we thought it might make for an interesting piece to dissect the differences between the two models. 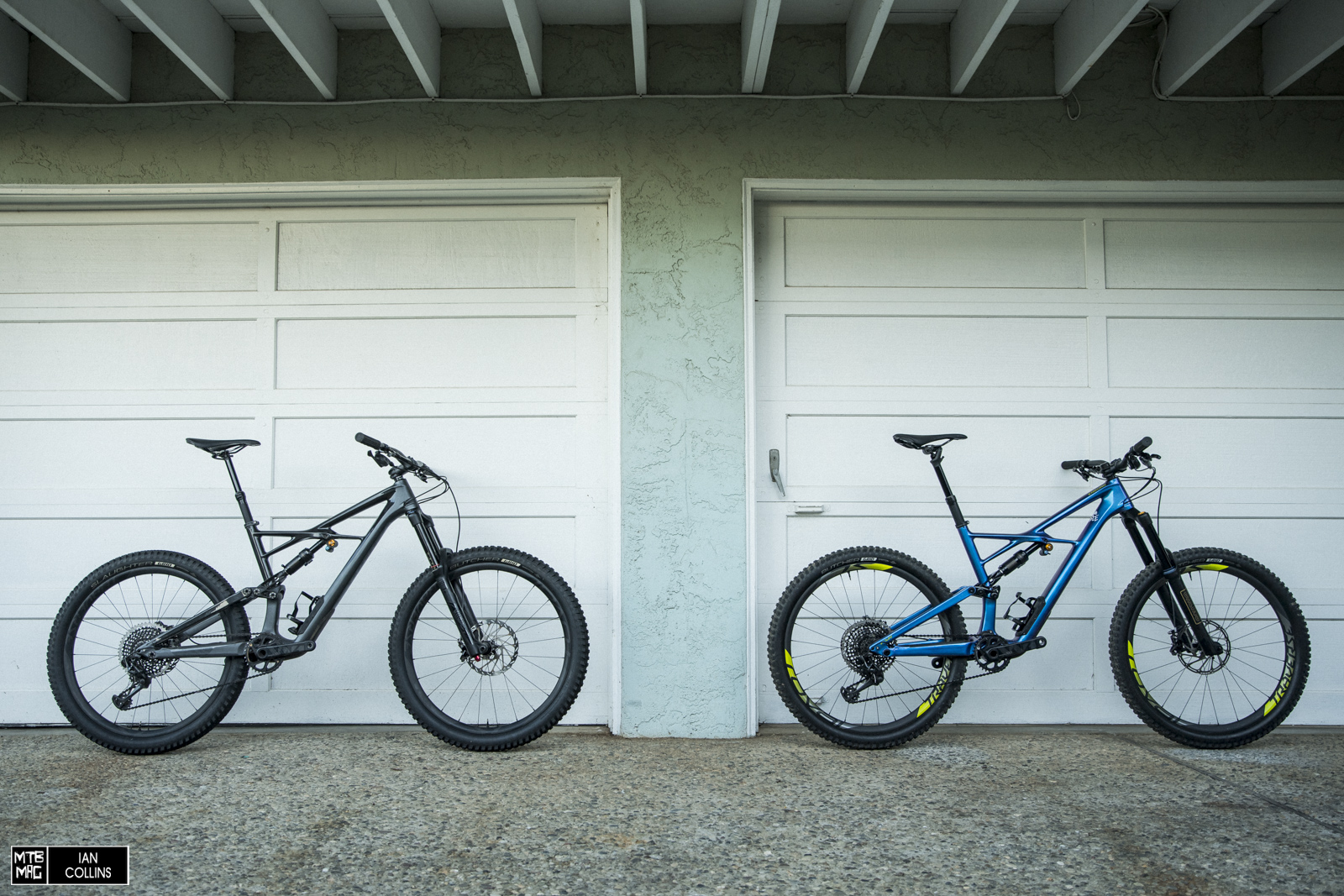 Before diving too far into the numbers, it’s worth noting that Specialized found a way to work adjustable geometry into the equation via a spacer in between the linkage and the shock. That’s something that we commend, as it typically makes a bike more broadly appealing to a wider range of riders with different needs and expectations depending on the terrain that they’re riding.

Looking at the geometry charts below, you can compare the differences between model years. The increase in top tube length/reach varies from size to size and becomes more drastic as the frames go up in size. 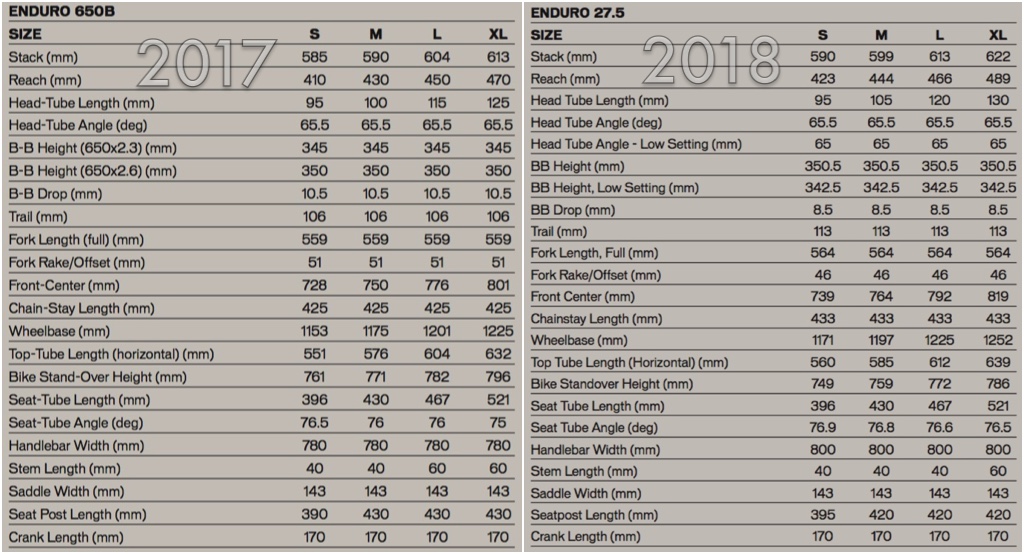 The chart below illustrates the differences between some frame dimensions. *Ignore the left side as it’s comparing the Enduro 29 numbers. This chart also takes High/Low settings into account, giving you an idea of the metrics that vary most when you swap between the two available settings.

Our size Large 2017 Enduro had a 60mm stem (left); a choice that we didn’t think was very fitting for the bike’s highly aggressive intended usage. Our 2018 Enduro features a much more fitting 45mm stem. The overall sizing didn’t feel massively different – the 2018 Enduro’s 16mm longer top tube was paired with a  15mm longer stem. We’ve only been riding the 2018 for a couple of weeks, but we feel the longer top tube and shorter stem make for a ride that is not only much more stable, but at the same time much faster in terms of steering. The bar width also grew from 780mm to 800mm, thus making us feel a bit more spread out over the front end while increasing stability. 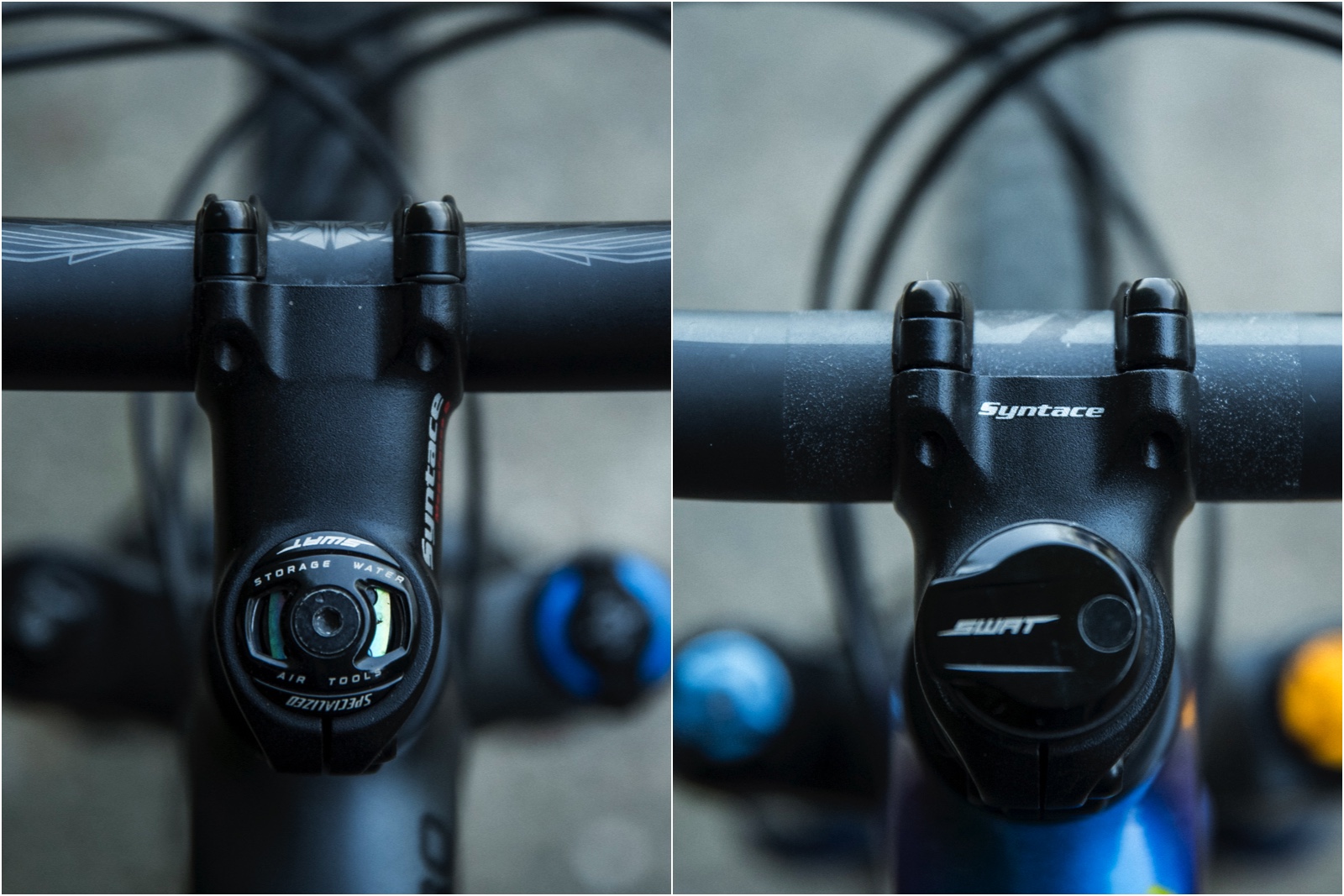 Specialized have also made the suspension rate a bit more progressive. We felt that the 2017 Enduro was a bit linear in rate, so this was warmly welcomed. The bike still has a relatively high leverage ratio and its mid stroke support could certainly stand to improve compared to other bikes on the market, but we’ve noticed a huge improvement in bottoming resistance. If you look closely, you can see a major difference between the two front ends. Looking at the 2018 on the right side below, you can see that the shock runs parallel and closer to the tube above it than its predecessor.

While the bikes have changed in build completely from 2017 to 2018, Specialized made a few noteworthy updates more closely related to their in house parts. First off and foremost is the WU Command post. On the left below is the standard 30.9mm Command post with 125mm of travel that’s spec’d on the 2017 Enduro S-Works. On the right is the beefy 34.9mm WU post with 115mm of shaft travel. 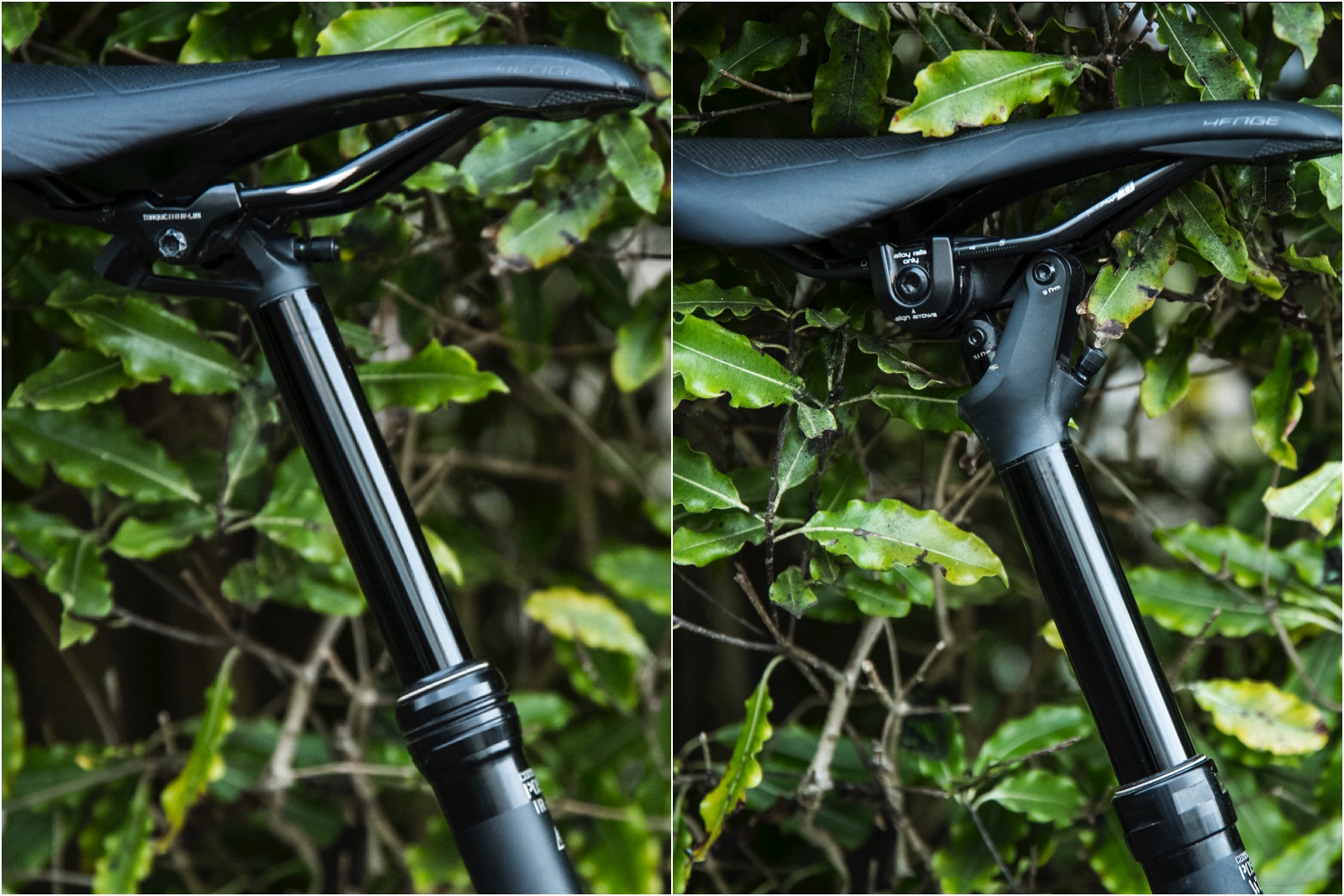 While the WU Command post only moves 115mm on the main shaft, it features a secondary shaft to change the angle of the saddle throughout the travel so its more appropriate for climbing when extended and more appropriate for descending when compressed. As you can see in the diagram below, depending on where you measure from on the saddle, the WU Command dropper has up to 150mm of travel. 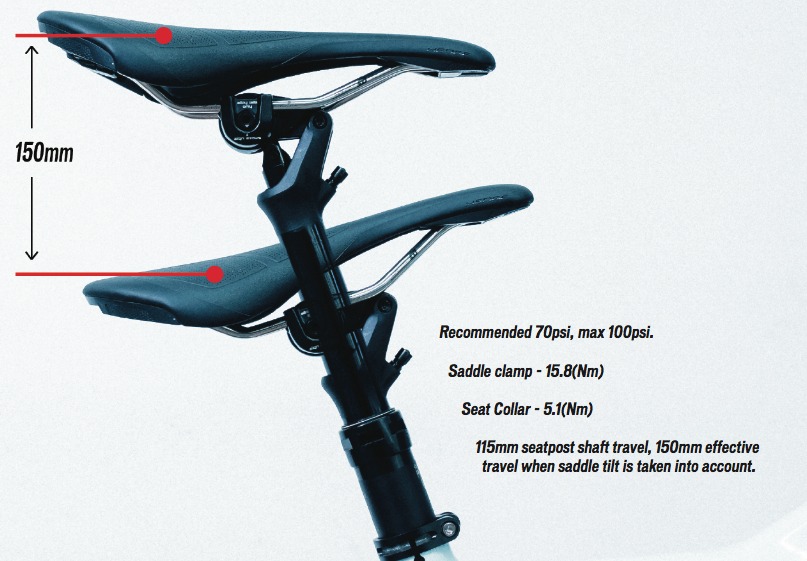 Moving to some more subtle differences, Specialized switched to their new SWAT CC multi tool storage system. Below, on the right you can see their standard multi tool which is attaches to the bottom of the bottle cage, which rests on the door of their game changing storage system located in the downtube. On the right, the new SWAT CC doubles as a “headlock” style headset tensioner (goodbye star fangled nut!) and stores a multi tool/chain tool with a spare link. Pretty damn nifty. 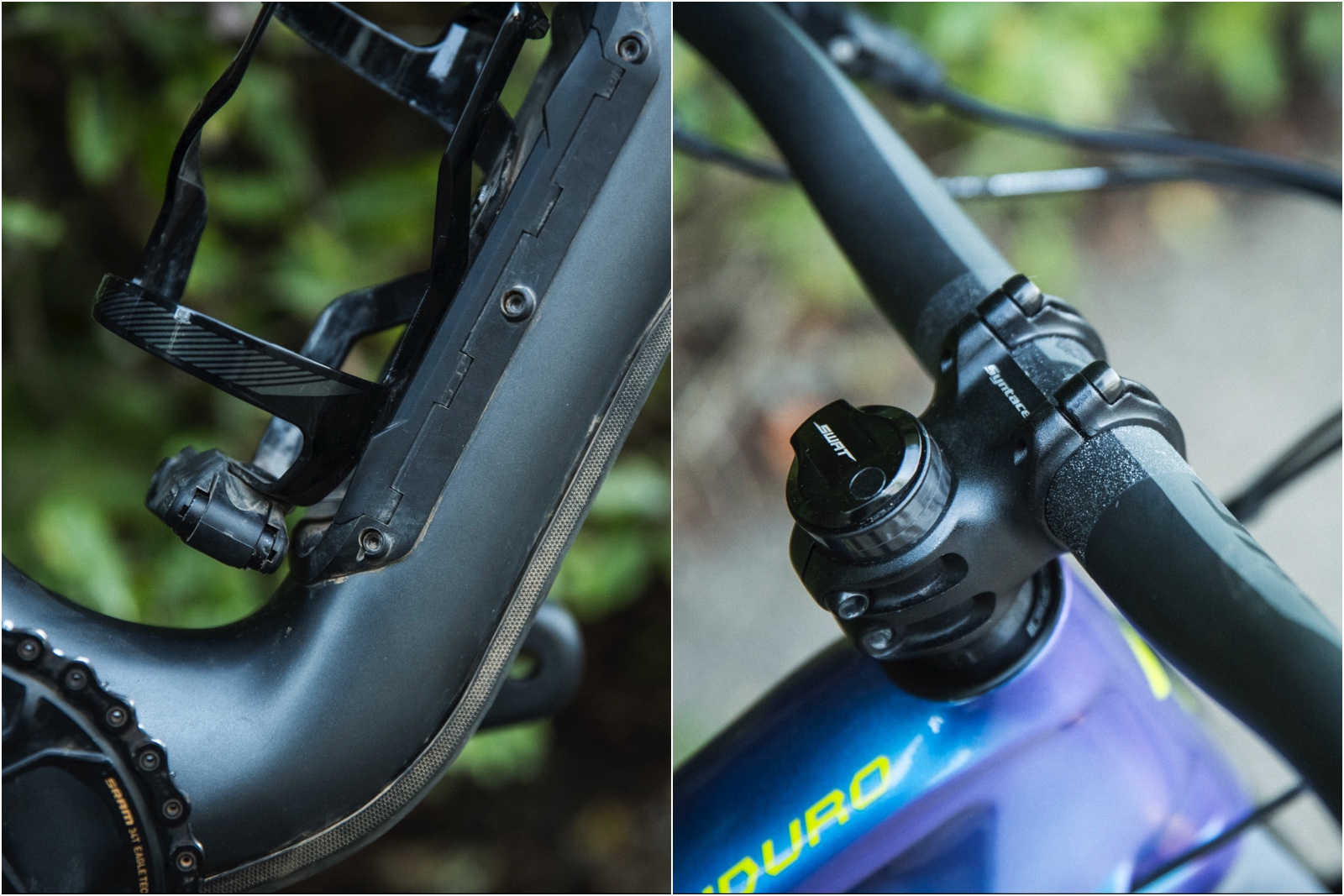 Moving toward choice of spec that isn’t “in-house”, Specialized opted to switch from SRAM’s Guide brakes to their more powerful Code brakes. As riders are pushing enduro style bikes harder and harder these days, this is a wise choice. 200mm/180mm front/rear rotors are featured on both 2017 and 2018 bikes. 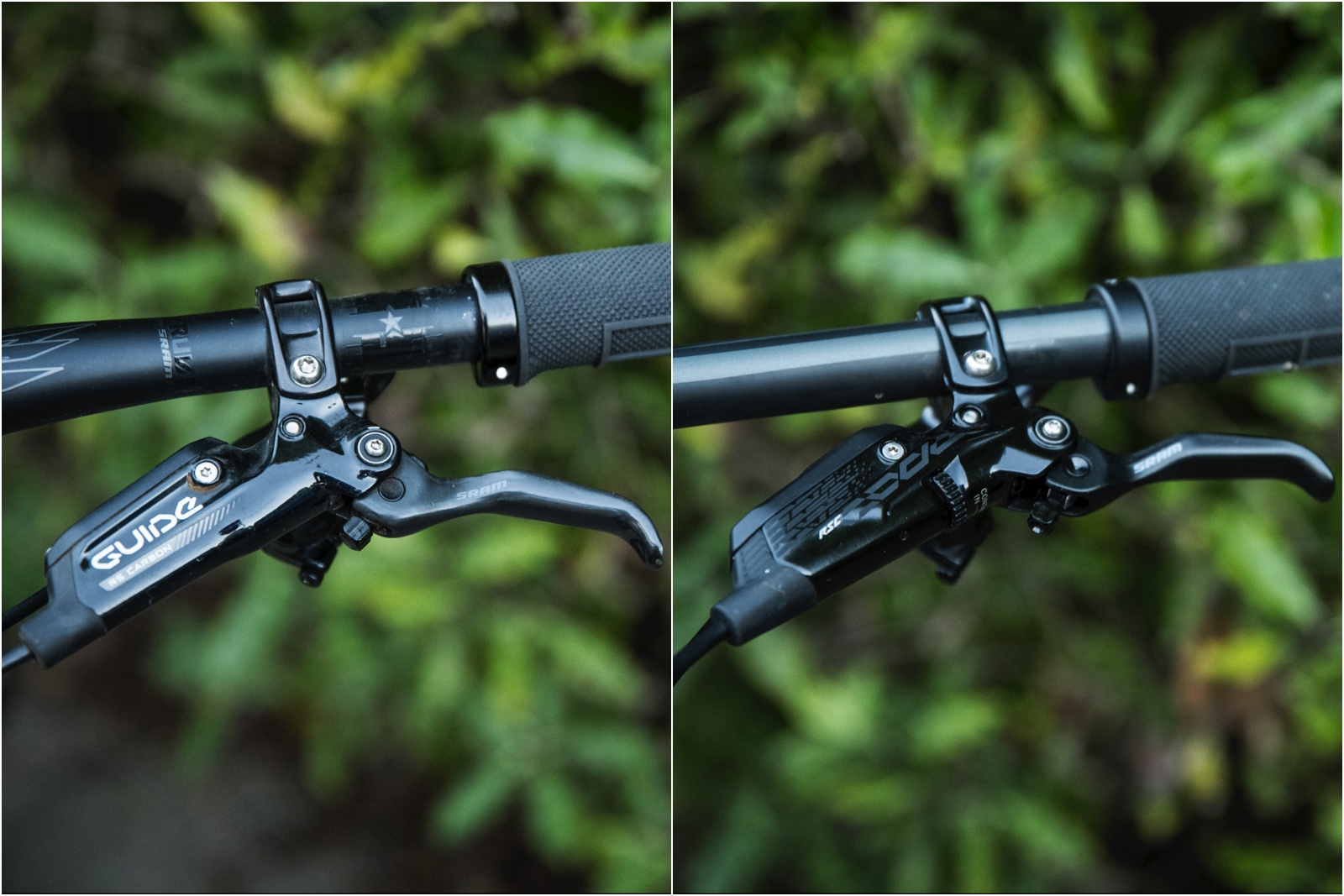 Last but not least we arrive at the tires. First off, for 2018, Specialized have forgone the RockShox Lyrik in exchange for the Ohlins RXF-36. If you look closely at the pictures below, you would think the “not quite plus” 2017 Butcher 27.5 X 2.6 on the left is much larger than the updated 2018 Butcher on the right. That’s actually not the case – a great deal of the difference comes from clearance between the two forks. It’s worth noting that for 2018 RockShox improved tire clearance on the Lyrik. Regardless, when looking at the two bikes side-by-side, the 2017 Enduro appears to have much larger tires. This was not the case – we even broke out the calipers to get an accurate measurement and the height/width of the 2017 and 2018 tires were pretty much negligible. 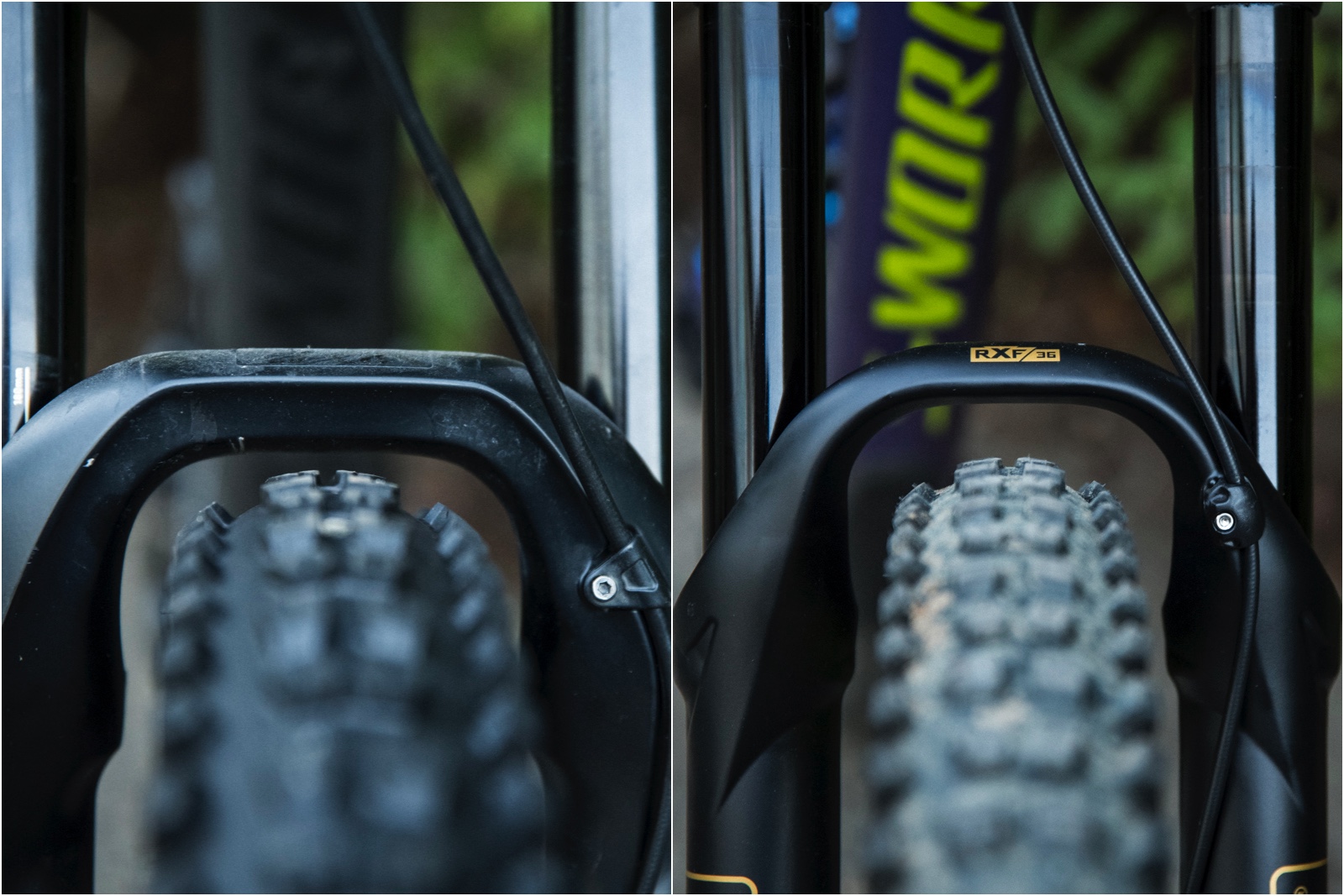 We received our 2017 Enduro S-Works a bit late in the year to complete a full review on it, and admittedly, our gripes with fit had our lanky tester spending less time aboard it than he’d should have. While it would be completely premature to review the 2018 successor, our first impressions are really good. The new bike is more stable and has improved responsiveness and handling, plus the adustable geometry is a big selling point. So far we’re enjoying the new features and changes to the spec. The added bottoming resistance is great on the big hits. The SWAT CC and Command WU dropper have been great on the trial and fully exemplify the “outside of the box” thinking that Specialized is so well known for. Stay tuned for a proper long term review of the 2018 Enduro S-Works in a few months…

[Video] How We Dropped Corbet’s Couloir on a Mountain Bike