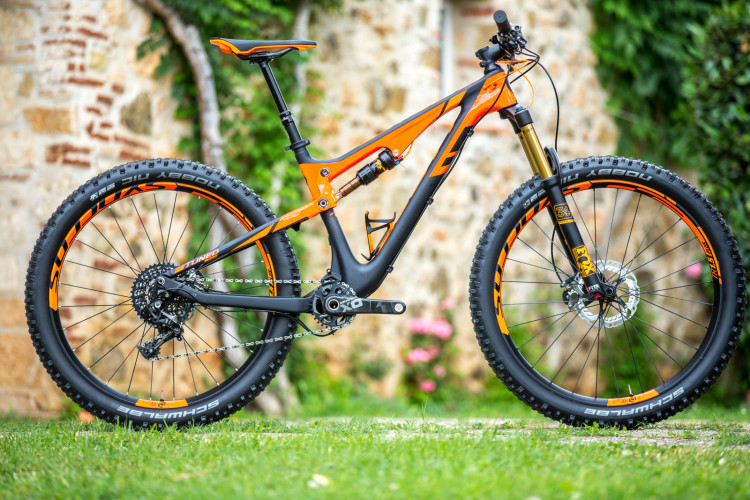 Scott recently presented their range of 27.5+ bikes for 2016. Utilizing tires that come in around 2.8″ in width, the wheel size is close in diameter to that of a 29″ bike. Scott strongly believes in the new size while not denying that the traditional 27.5″ and 29″ is also here to stay. 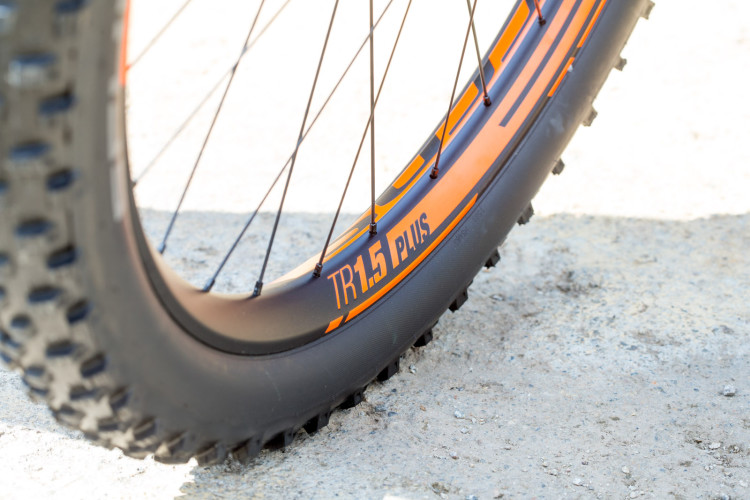 The Swiss brand arrived at 2.8 inches after running the gauntlet on several tests of 3″ tires : the 0.2 inches less width allowed them to avoid weight increases while still taking advantage of a great deal of added traction. Thanks to an “in house” aluminum wheelset : the Syncros TR1.5 27.5 with a 40 mm inner width and outer width of 45mm (remember, Syncros belongs to Scott) and a collaboration with Schwalbe Tires for the development of the Nick 2.8″ – Scott managed to keep the weight of the wheel + tire around that of a 29″ X 2.3″. This way, the rotating mass is reduced and in turn compensates for the annoying characteristics of a fat bike’s flywheel effect. Schwalbe data on the comparative performance of a Nobby Nic 2.35″ compared to the new Nobby Nic 2.8″.

First, the footprint on the ground is greater than 21%. Note the pressures shown in the picture, and remember that a wide tire requires less pressure to have the same “hardness” of a narrower tire. Interestingly enough is that the rolling resistance is virtually identical, while offering greater resistance to pinch flats.

The average weight of a 2.8″ Nobby Nick is 820 grams. It’s tubeless ready, with snakeskin casing, and has the same carcass as the Nobby Nic that is already on the market.

Four models/platforms are offered as Scott Plus, with various options throughout. 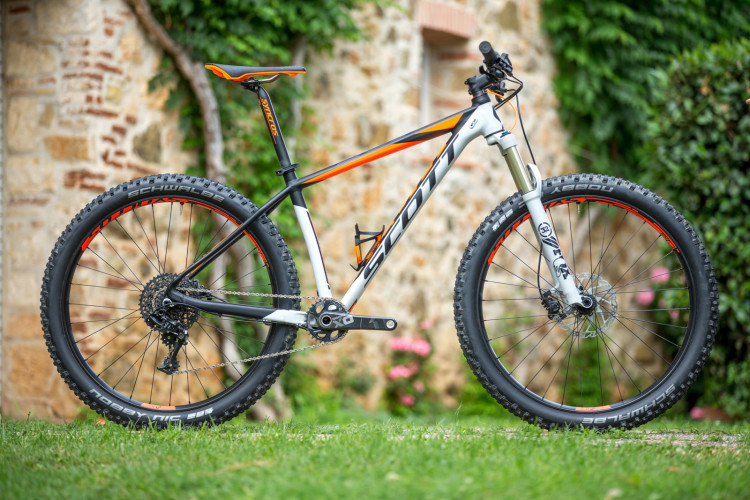 Forget the super light XC bike geometry. The Scale Plus is effectively a hardtail trailbike with a steering angle of 67.6° and a weight of 11.80 kg. Front travel is 120mm. 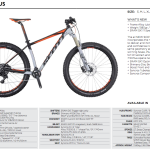 The is your classic Scott mountain bike, only now it is also available as a Plus bike maintaining its “All Mountain” characteristics with 140mm of travel up front and 130mm in the rear. They range from 12.30 kg claimed weight for the Tuned Plus, to the Genius 710 Plus at 13.20kg, to the 720 plus coming in at 13.80 kg. 160mm of travel front and back for a bike that’s effectively in the Enduro Plus category. This version comes in quite light, coming in at 12.70 kg (claimed) in the Tuned version, thanks to the carbon front triangle. The rear is made of aluminum, as is the front end on the non flagship Genius models. Not to be overlooked is the electric version, with Bosch Performance CX 250w motor and a 500w battery. The travel is 140mm up front and 130mm at the rear. The female version of the E-Genius is fittingly dubbed the E-Contessa. It mainly just deviates from the male version in regards to size and colorway. What unites all the Plus bikes are the Fox suspension units. Basically, these are the same systems that we presented in our preview test a few weeks ago, but they do feature some additional features that we’ll cover later. Negative chamber volume has been increased and new hydraulics in the rear shock and fork’s fit cartridge are a massive improvement for Fox 2016. All models are of course equipped with full suspension that features a Twin Loc remote control. A huge trademark for Scott, which regulates both the fork and the shock. The Fox Nude DPS Shock has three modes (130MM-90MM-0MM): Note the new position of the Twin Loc : now under the handlebars for the bikes mounting a 1x drivetrain. With the Plus format it is necessary to use the new open standard Boost 148, which we’ve discussed in this article . With this standard, you can be sure that the tires do not touch the frame or the chain, and in regards the fork the hub is 110mm wide in order to accommodate the larger tires. By the way, the new Scott Plus bikes fit tires up to 3 inches wide. Both the Genius the Genius LT have thus received a new rear end while the front triangle remains unchanged for the 2015 and 2016 models which utilize classic tire sizes.