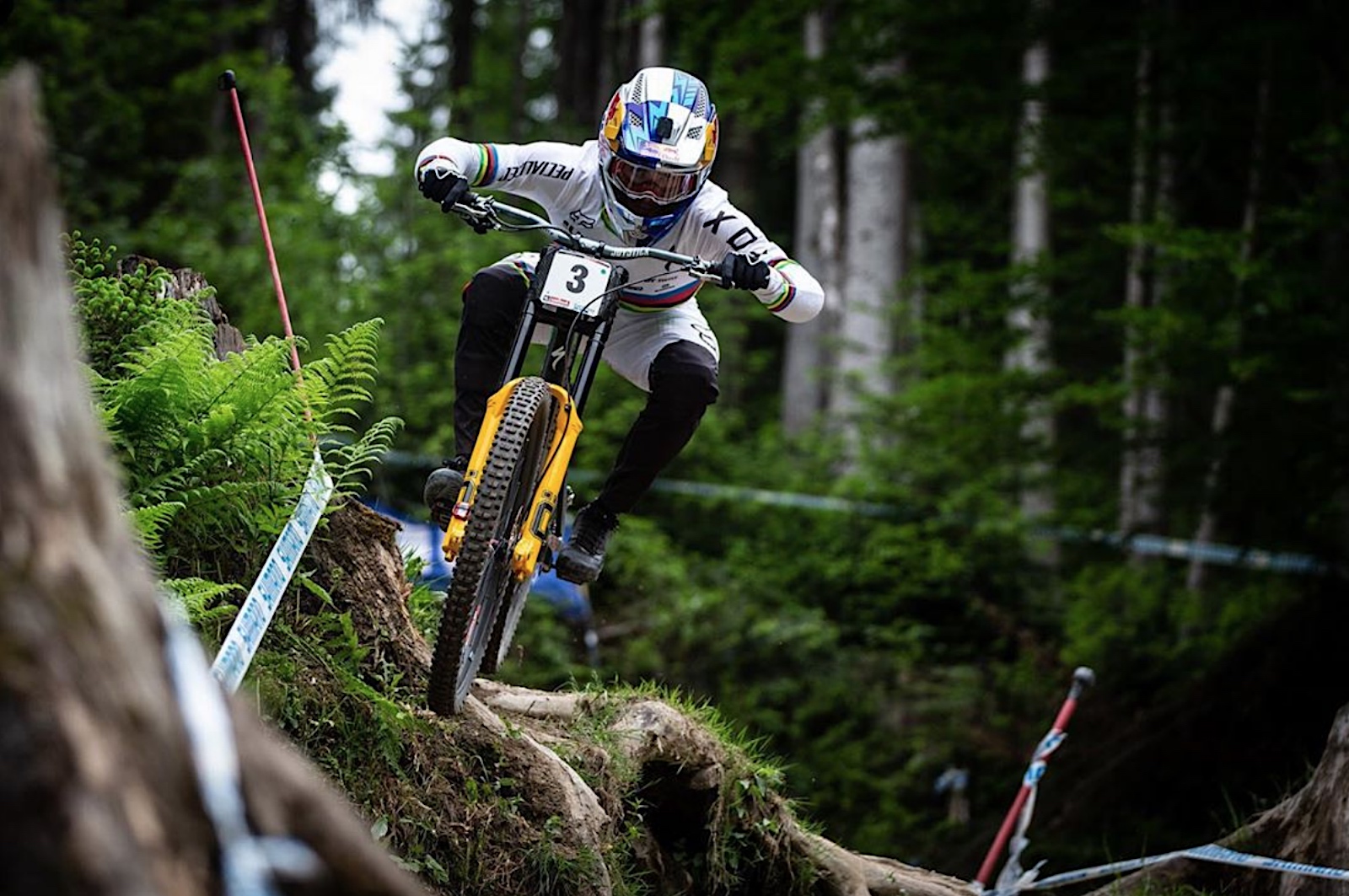 The sun came out to shine on the UCI DH World Cup after last weekend’s rain in Fort William. For the seventh consecutive time, Leogang plays host to the elite world cup downhill circuit, with its famously fast track, full of jumps and a few very steep bits full of big roots. This was definitely more challenging than usual considering the amount of dust on the ground. Loic Bruni was able to best interpret each different section of the track, without any uncertainty or bobbles in his run, he was extremely concentrated and determined. The reigning world champion has thus taken his second World Cup victory of the 2019 season, putting him at second place in the overall standings.

The indomitable Greg Minnaar, the 37-year-old who is now the face of downhill, an athlete with the highest number of World Cup victories, after winning the qualifying round yesterday nearly claimed victory again in the final. With a comeback in the second half of the course he landed in second place, only 3 tenths behind Bruni. Troy Brosnan laid down an excellent run, with some particularly aggressive lines, different from the rest of the athletes in the race, always clean and precise. He would finish in 3rd, demonstrating a consistancy of results unique among all the top riders that in fact is what allows him to maintain the leadership position in the overall. Fourth place for Danny Hart, who rocketed down with aggressive and effective riding, followed by Aaron Gwin who this season seems increasingly desperate for a win. Amaury Pierron, the winner of Fort William, closed it out in sixth place. A trivial bobble put Loris Vergier back in 18th position. 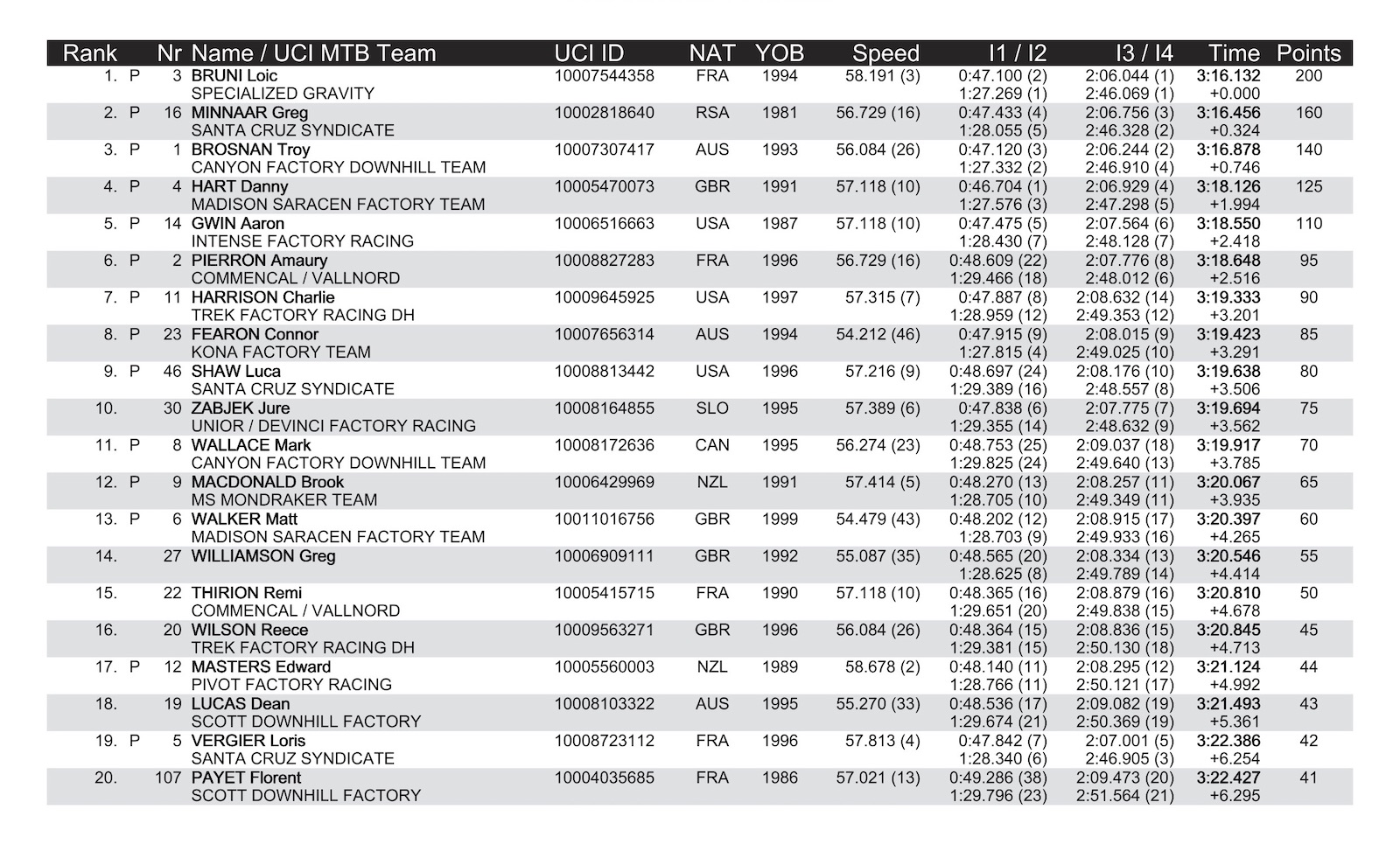 Tracey Hannah fgot her first big win of the year! The Australian athlete hit her target on the fast, dusty track in Leogang as the same track that put Rachel Atherton out of the way now seemed distant from her embarrassing superiority of the past seasons. The world champion crashed at the top of the track, toppling off the course and ending the race in 15th place. Nina Hoffman confirmed her positive series of results again with a well deserved podium: after the third place at Fort William, here in Leogang she landed on the second step. Third place for Kate Weatherly, a transgender athlete from New Zealand, who in these first three rounds of the 2019 season is proving increasingly competitive. Fourth place for Marine Cabirou, despite a crash. Veronika Widmann closed out finals in Leogang in fifth place, repeating her excellent result of Fort William.

Thibaut Daprela, the young protégé of the Commençal Vallnord team, continues his winning spree, laying down the fastest time in the final round of Leogang. Behind him, with a gap of 2 seconds, Australian Kye A’Hern, is back on the podium after some lackluster racing. Third place goes to Frenchan Matteo Iniguez. 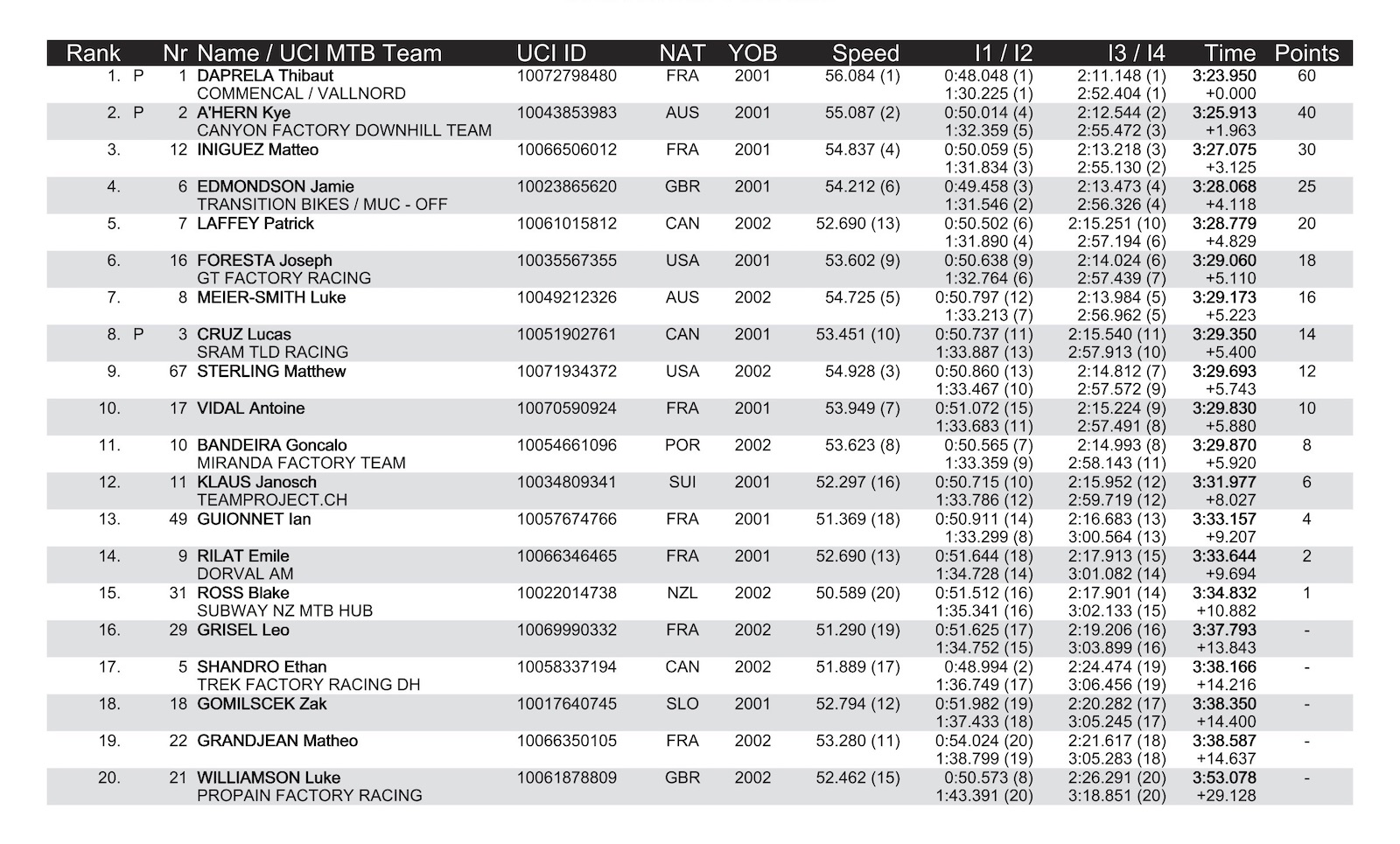 It is almost pointless to keep reiterating the clear superiority of Valentina Höll within her category but it is interesting to consider that for the first time her run would have earned her a podium in the Elite category. Definitely a good result for her, in front of the home crowd. The American Anna Newkirk once again found herself in second place, excelling on the rest of the female Junior category. Third place for Mille Johnset at half a second from Newkirk.

The next round of UCI DH World Cup will be held on July 6th in Vallnord, Andorra.