Several weeks back I built up an Evil Offering “Dream Bike” as a personal ride, to use when I’m not riding complete test bikes. It serves not only as a great excuse to put together an all out build, but also provides a place to hang components to test. A few of the parts on that bike will see long term reviews, and first up is Cane Creek’s highly coveted eeWings, hollow titanium crankset. 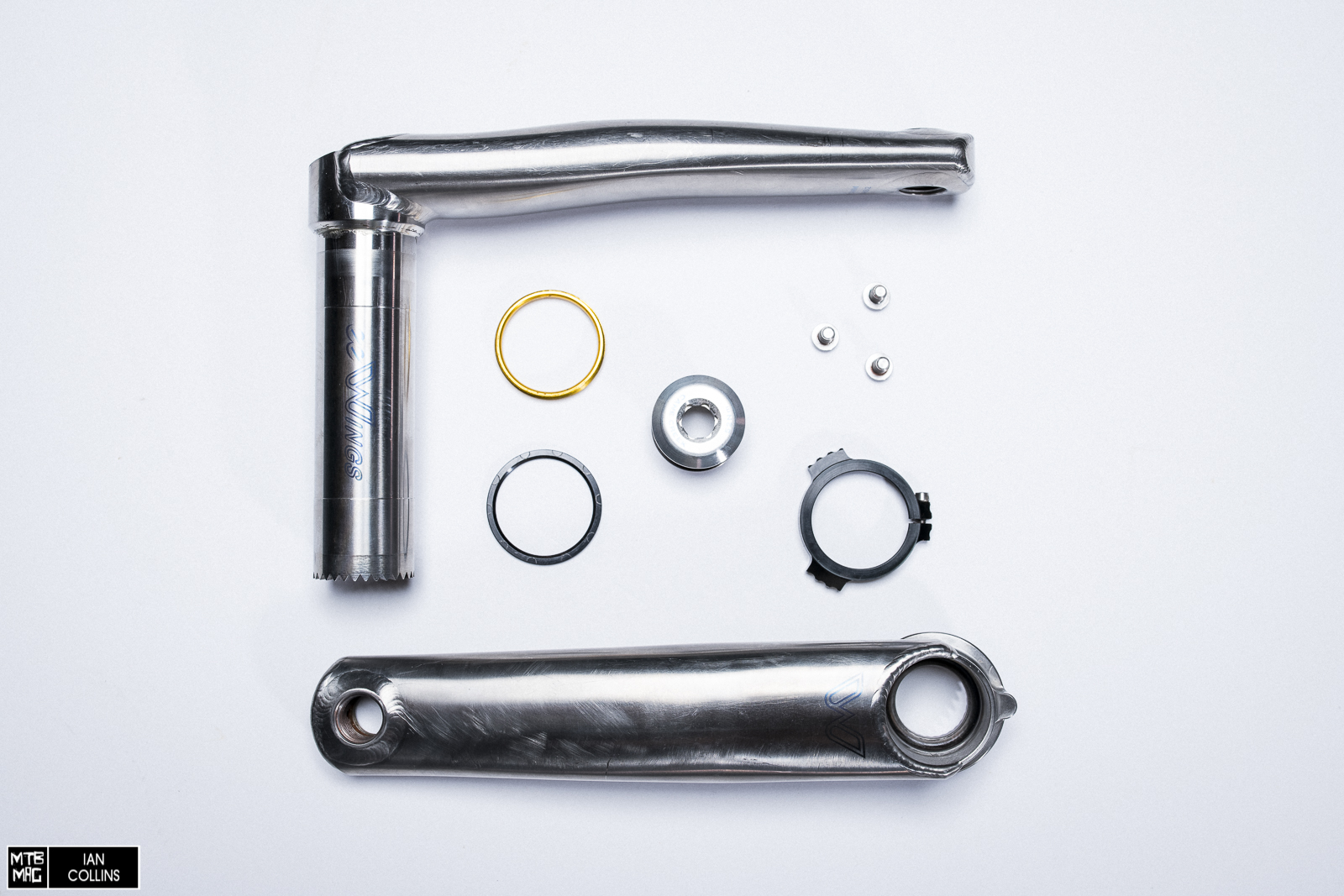 This crankset came out just about a year ago, and made waves when it did. They’re quite light, super stiff but  ultra expensive as you might expect. The general response was: “I want those, but why are they so expensive?” The answer to that is quite obviously: the materials and processes involved. So, really it comes down to performance and value, which we’ll be exploring futher here. 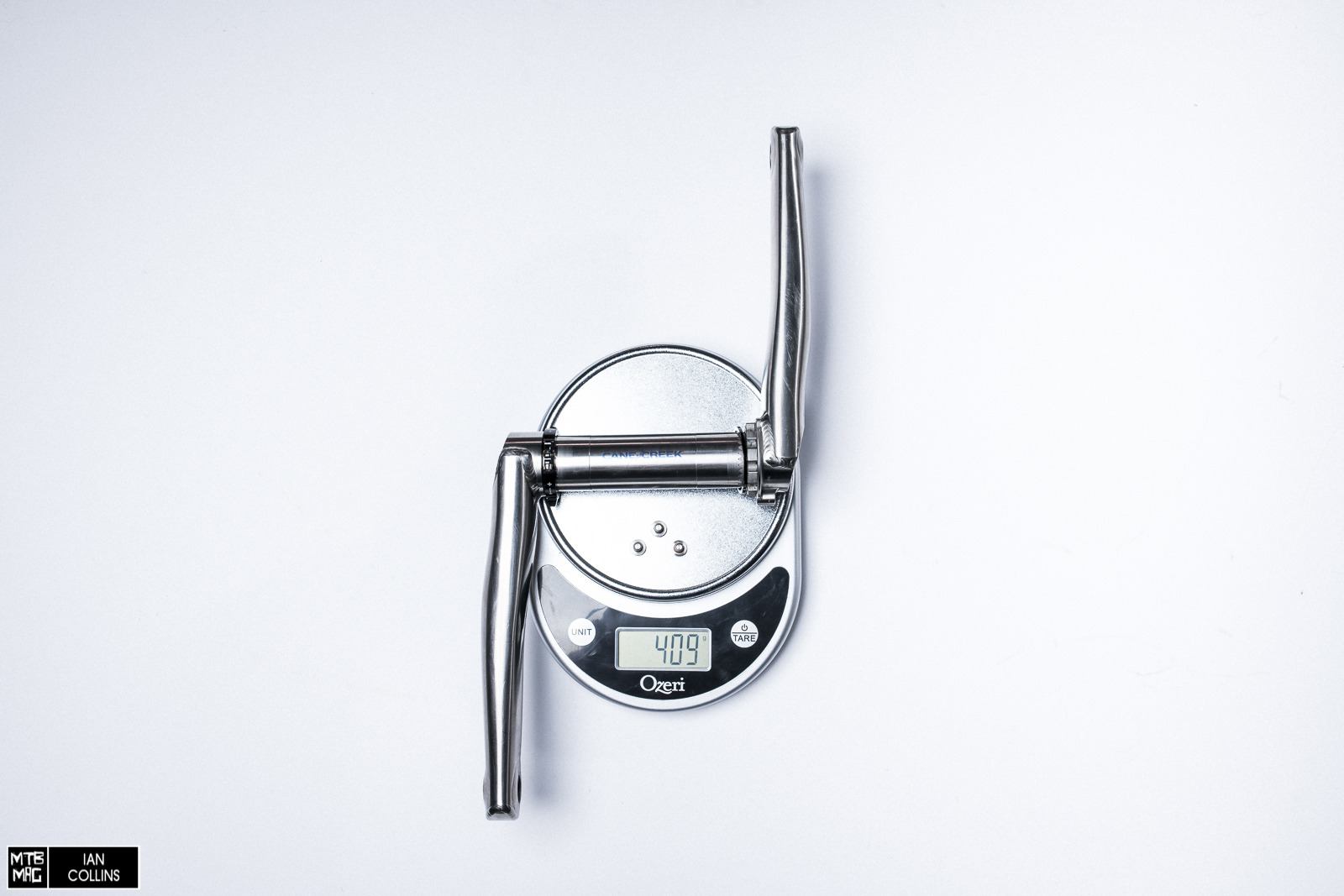 The eeWings tip the scale at 409 grams including hardware such as the bearing races, chainring mounting bolts and preload ring. By the way – props to Cane Creek for using a nice, anodized aluminum preload ring, not a cheap plastic one. That would be sacrilege on these beauties. Note: even the preload ring uses a ti bolt! 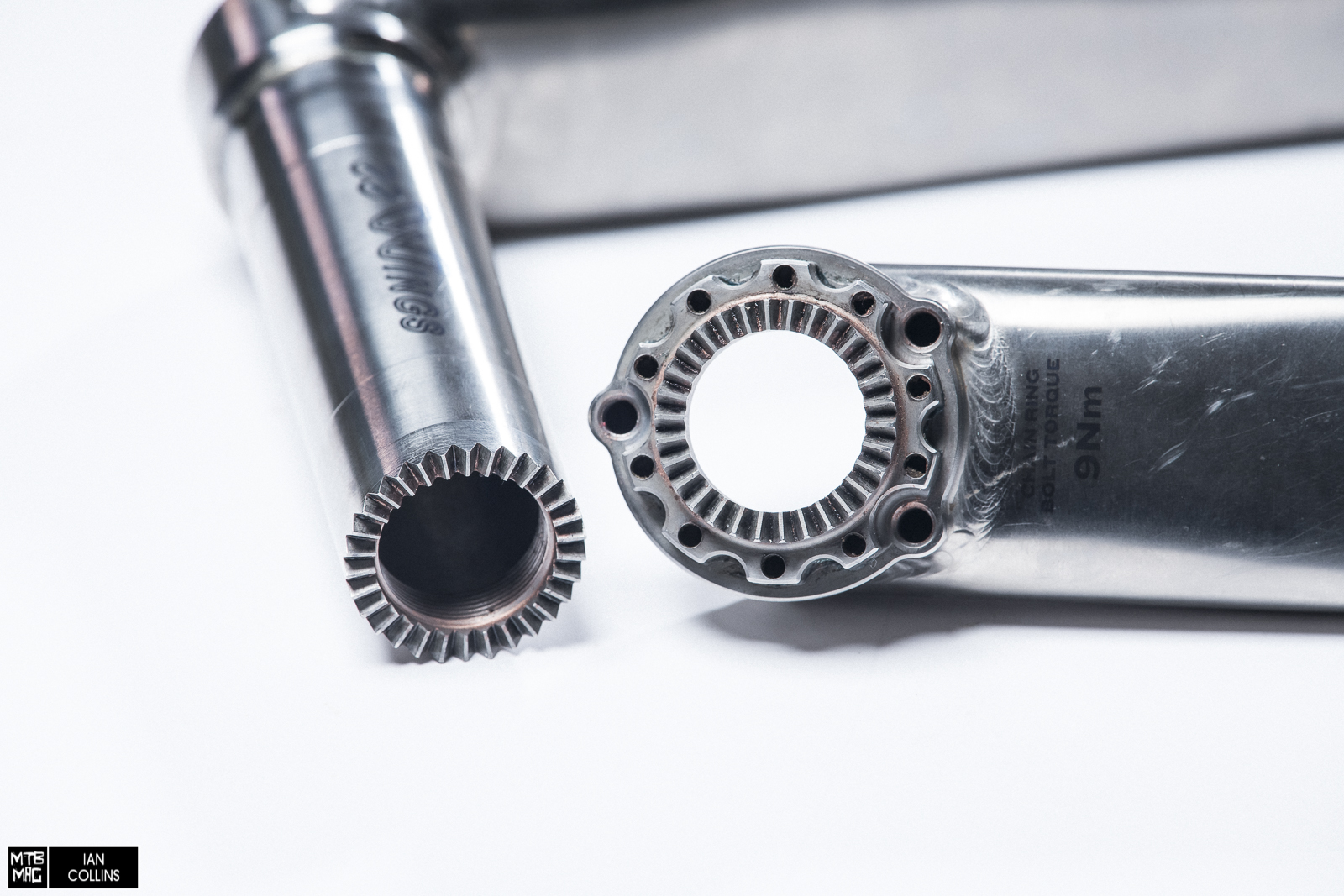 The eeWings have a 30 tooth “hearth joint” where the axle connects to the drive side crank arm. Cane Creek has adopted the standard 3-bolt pattern from SRAM’s X-Sync direct mount chainrings. The torque specs are laser etched onto the cranks with a lasting treatment, and the 30mm axle allows the crankset to work with an array of frames and bottom brackets. You can find a BB fitment guide here. As you can see in the specs above, the cranks are made from 3Al/2.5V titanium alloy at the arms and 6Al/4V at the axle. The welding is beautiful, as is the machine work. 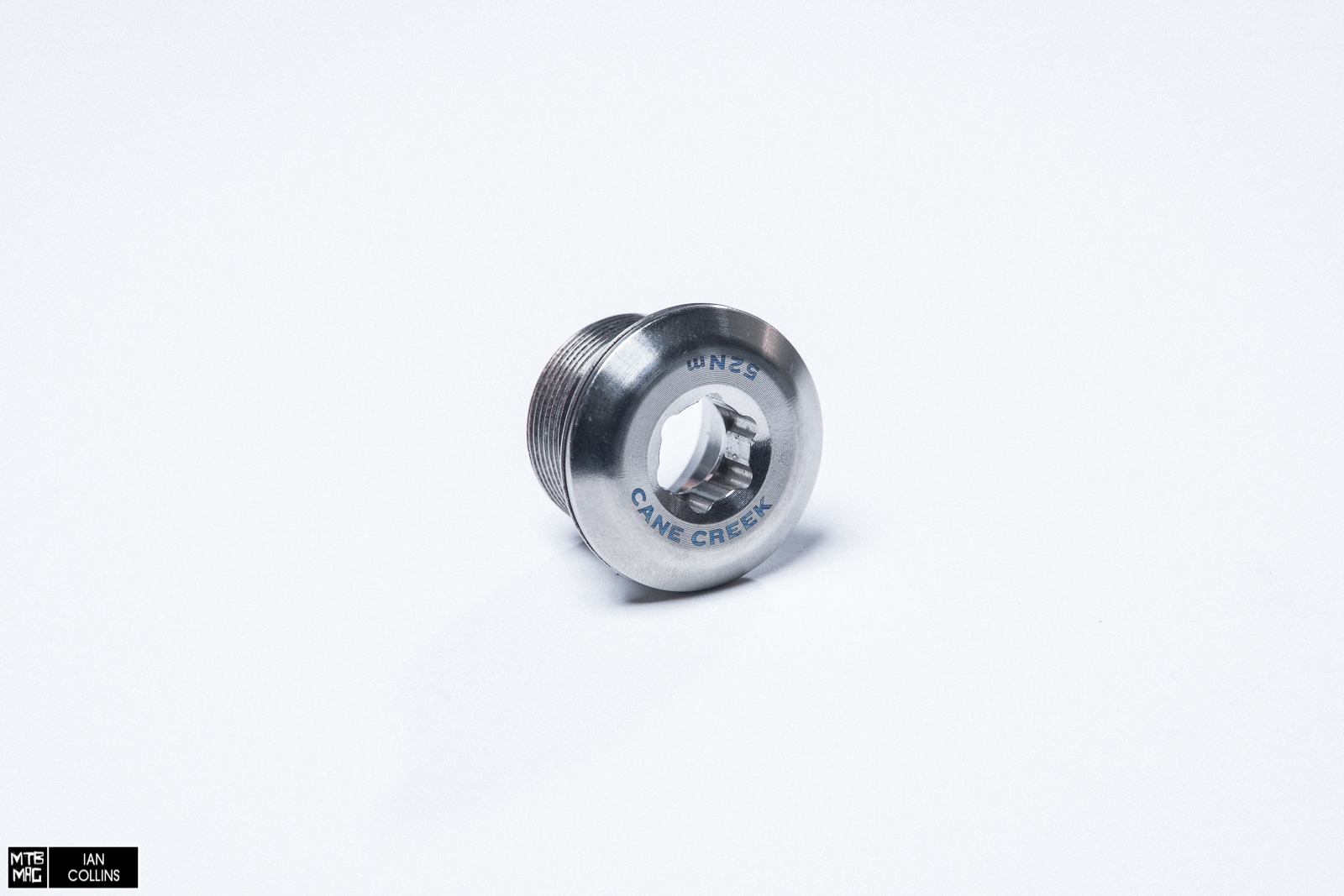 eeWings are held together with a single 10mm bolt, which features a conical washer and etched in torque specs. Oh – it also is made from titanium. 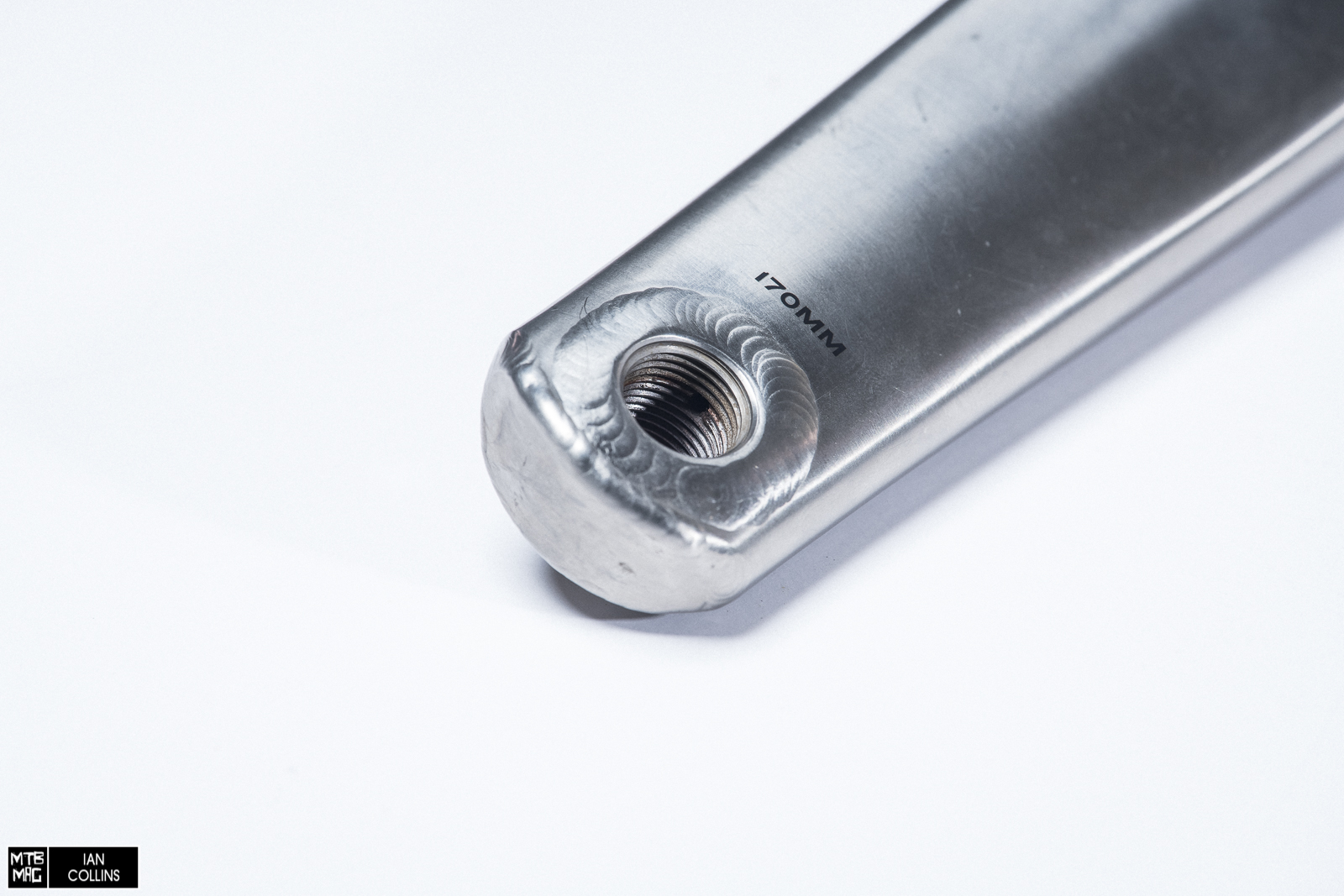 At the moment, you can buy eeWings in 170mm or 175mm arm lengths. Since I paired them to a rather low slung Evil Offering, I chose the former as I’ll take all the ground clearance I can get. 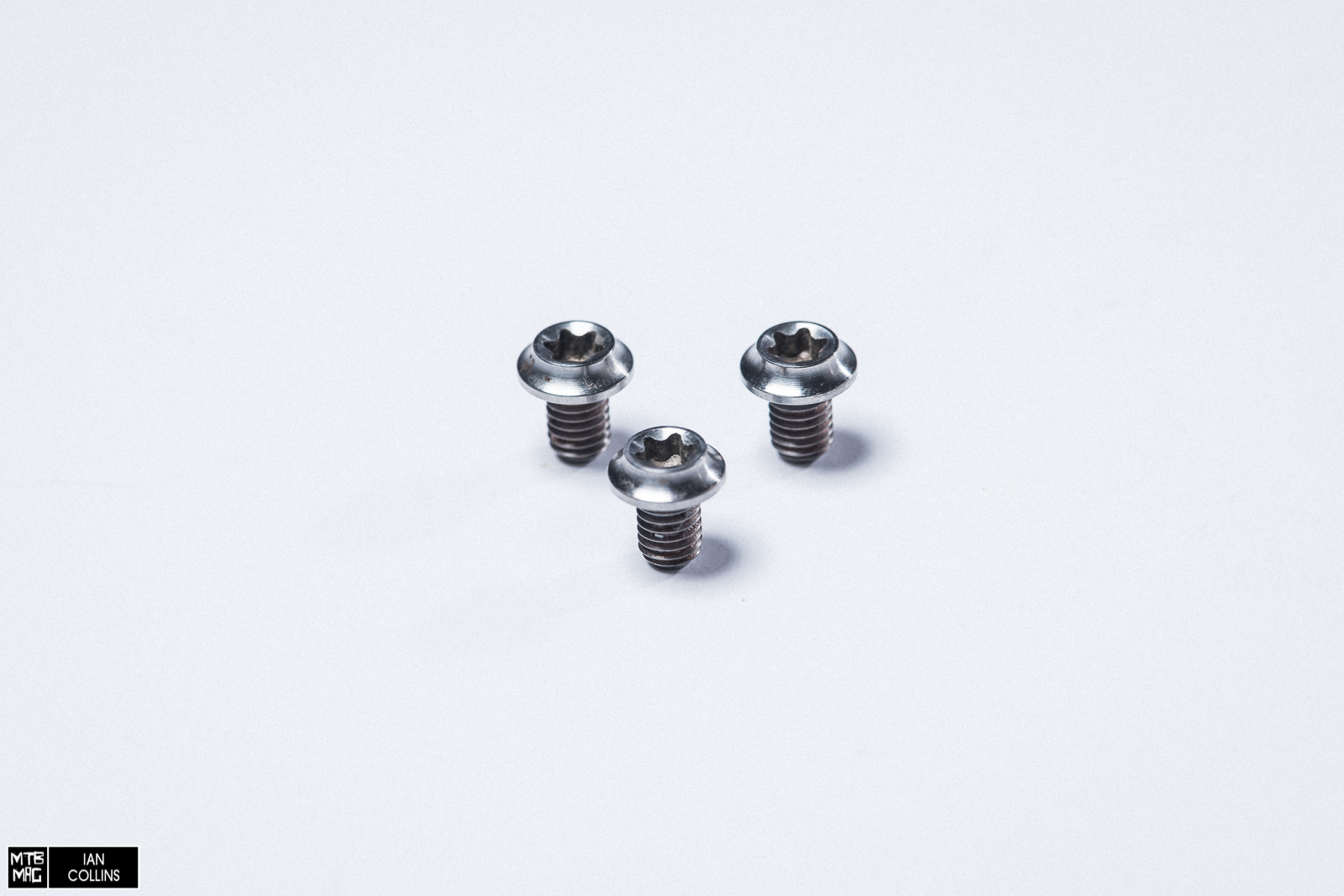 Last, but not least – even the three chainring mounting bolts are made from titanium…

The installation and setup was remarkably simple and clean with everything threading together beautifully. I chose a Chris King ThreadFit 30 for its equally high quality finish and legendary bearings. Titanium is a funny material. It’s difficult to machine, butt, bend, and weld, which is obviously part of the reason it’s so expensive. With that in mind, it also requires use of something other than your run of the mill grease. You’ll want to make sure you use Finish Line “Ti-Prep” anti-seize wherever threads exist, to prevent galling. Anyhow – once the chainring is on, all it takes is that single 10mm allen to keep things in place. This shines a light on what is perhaps the only minor downside to these cranks – you can forget trailside removal/tightening as there isn’t a single multi-tool (that I know of) which features a 10mm bit. On a brighter note, they simply never, EVER came loose in the duration of our test. 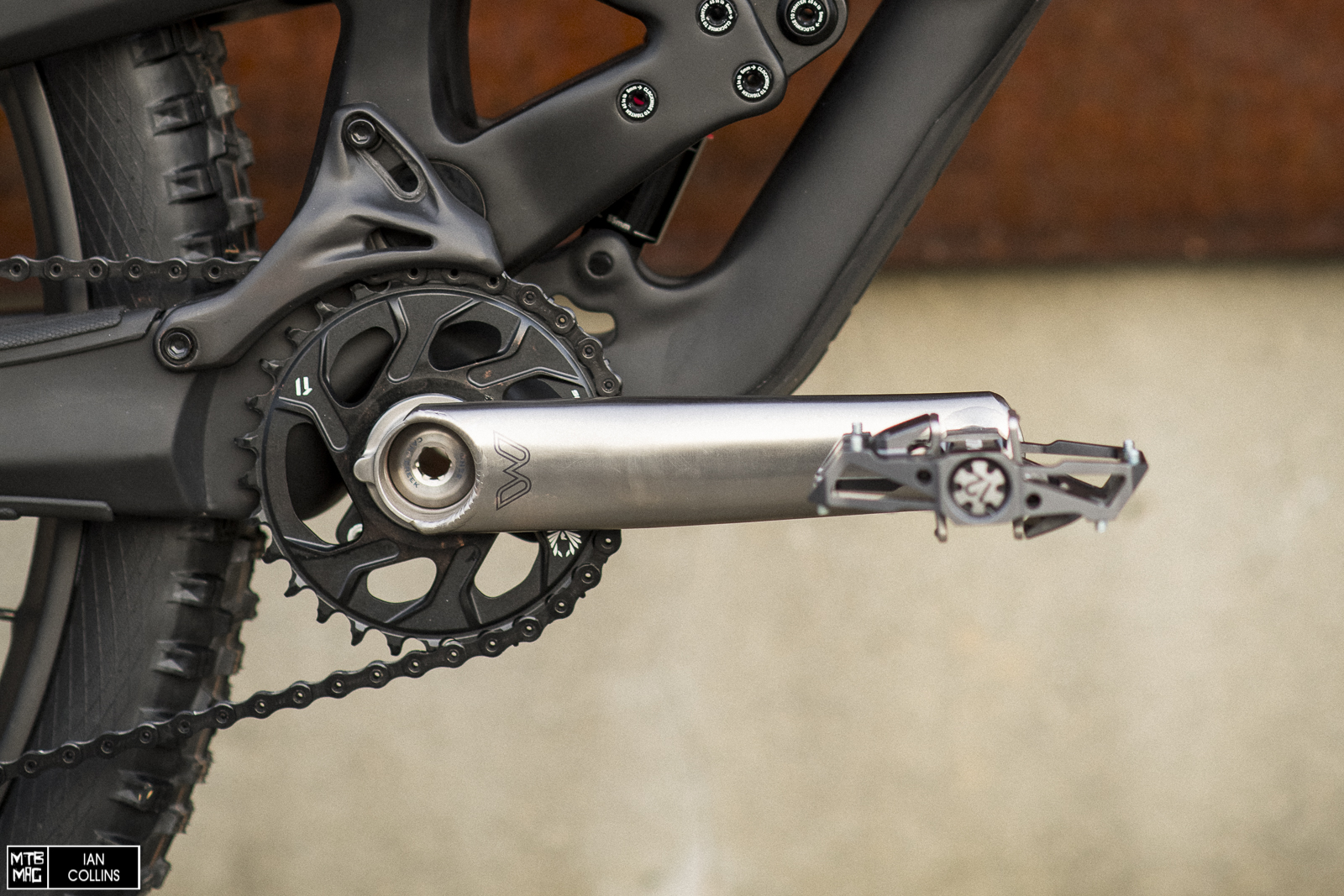 It’s worth pointing out that while the price of the eeWings might freak some people out, it was wise of Cane Creek to opt for a somewhat universal 30mm axle. While many consumers are wary of the bike industry (rightly so), and its constantly changing standards, I feel confident that 30mm axles aren’t going anywhere any time soon. This means that if you drop in on a set of meant-to-last-forever cranks that cost around $1k, you likely won’t be having compatibility issues with whatever frame you’re transferring them over to 2-3 years down the road.

Having never owned a set of titanium cranks in the past, I wasn’t quite sure what to expect from the eeWings in terms of ride characteristics. Admittedly, most of the time I spend are on some variation of SRAM cranks, more recently DUB, and Race Face, Praxis, or Shimano – you know, the usual, predictable bunch. Beyond aesthetics, the first attribute I picked up on was the stiffness. Cane Creek claims that the eeWings are “20-30% stiffer than premium carbon cranks in the same weight range”. My legs are not test lab accurate, but I wholeheartedly agreed with that claim a few sections down the trail on my first ride aboard them. If you’re perceptive on a bike, you’ll notice the rigidity immediately. Oddly enough, I never thought of the average high end carbon crankset as falling short in this arena, but it is one of those things that you don’t realize what you’re missing out on, until you experience how much better it can be. 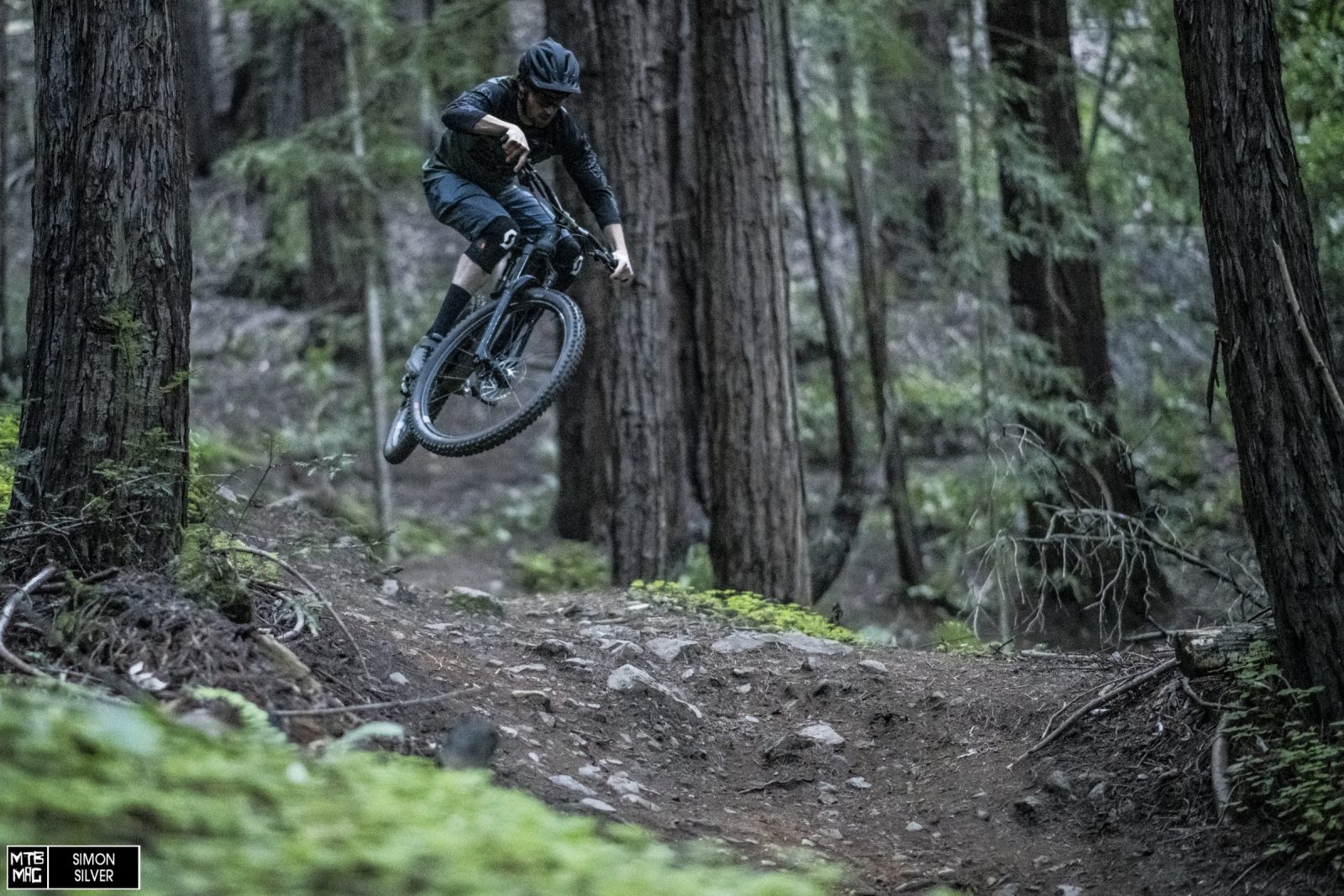 One easily overlooked advantage to titanium cranks, compared to carbon fiber in particular, is that it better manages impact resistance. I’d also safely bet that the eeWings are not only stiffer, but also stronger than the average carbon crankset. Anyhow, titanium is a very hard metal, and unlike aluminum or carbon fiber, rocks and chunder that nick and bash the eeWings hardly leave a trace aesthetically, so over time they barely age. There’s a reason they don’t need rubber crank boots. The nature of the finish also means that as they “age”, a few minutes with a 3M scouring pad will have them looking brand new again.

This is the part of a review where I generally talk value. While it is understandable that some might deem it outrageous to spend $999 on a set of cranks, the eeWings are immensely better than any crankset that I’ve ridden to date. They’ll most likely outlast just about any drivetrain component on the market, due in equal parts to intelligent design as well as a lack of moving, wearable parts, compared to parts such as derailleurs. The biggest foreseeable downside would be the unlikely event that the bike industry came up with a radically new bottom bracket standard. At the moment, it’s looking like there will be frames that can utilize 30mm axles and bottom brackets to marry them together for quite some time to come. 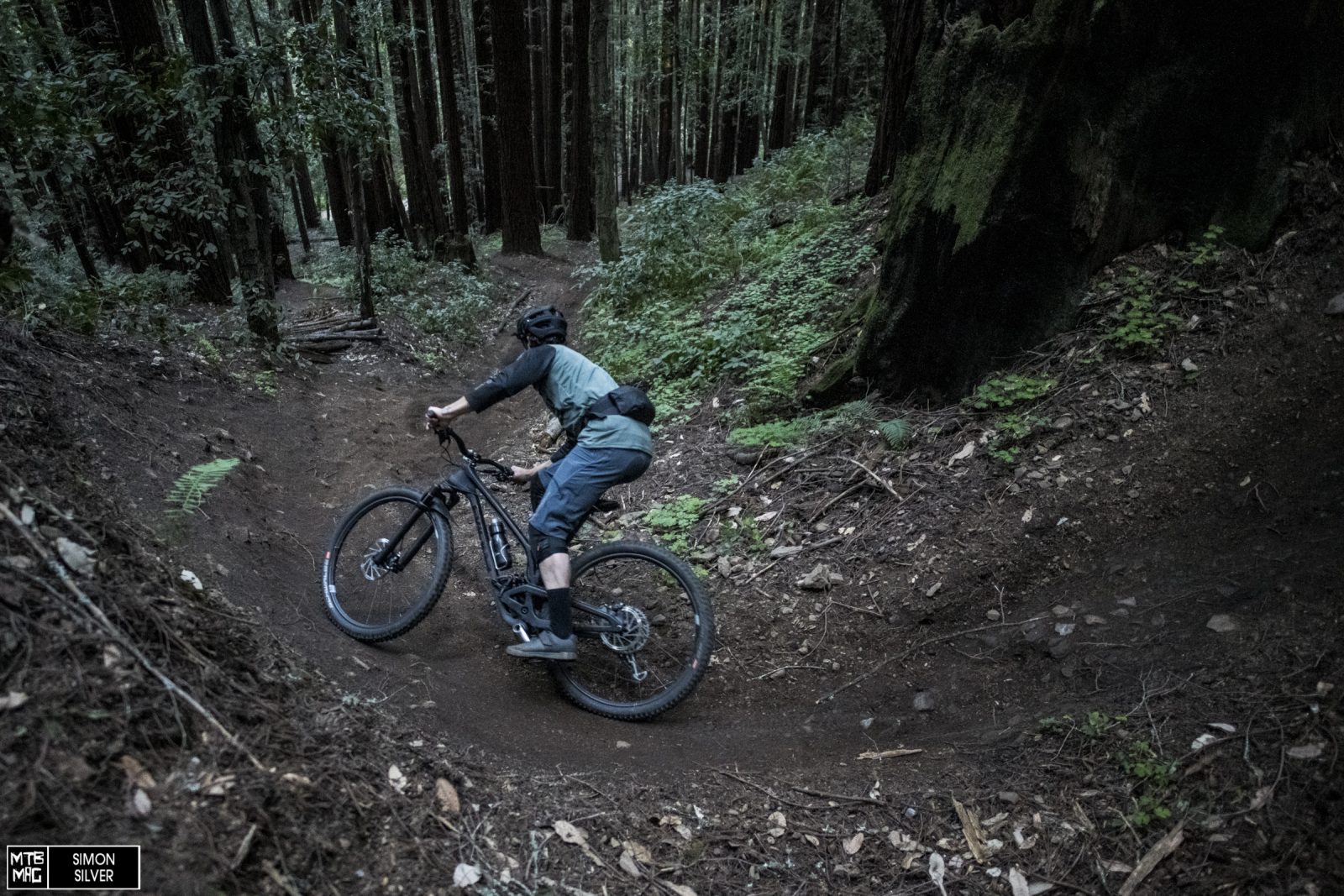 So, it all comes down to you and your budget. I’ve had a set of $86 Truvativ Descendant cranks that lived on 3 different downhill bikes for 3 years before, so I understand that there are budget parts aplenty that do a fine job. But if you want to treat yourself, and I mean really treat yourself, there are few components on the market today where the extra money spent does proportionately go toward such improved trail feel and added longevity. You can check back with me in a few years, and while the Evil Offering may no longer be the favorite bike in my stable, whatever bike that is will surely have these exact same eeWings mounted to it. I’m not one for worship, but they are utterly divine.