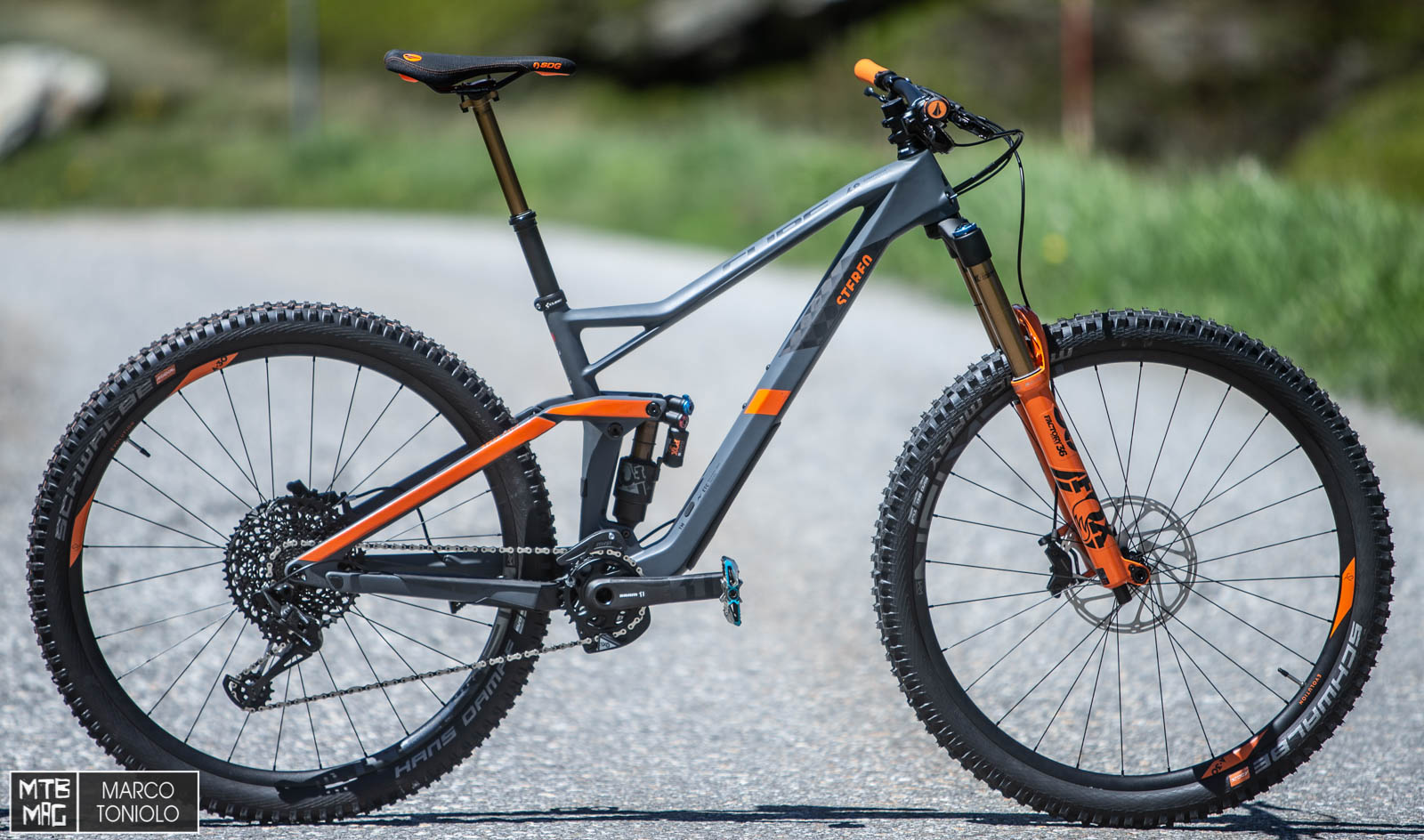 With the Stereo 150, Cube enters the long travel Enduro 29 segment. Just a few years back, “racers” were skeptical, thinking that these bikes were way too slow in changing direction and clumsy compared to their 27.5″ wheel shod counterparts.

New geometries completely changed the game, reducing the negative effects. Shorter rear triangles with lower bottom brackets and longer reach values, and also more relaxed head tube angles, made the 29ers behave almost like their smaller sisters. In this way, the lower rolling resistance and the ease of overcoming obstacles emerged as clear pluses. Some brands like Transition and Mondraker, went even further with extra-long reaches compensated by forks with shorter offset values (42-44m instead of the classic 51mm), to let us know the development and improvement of geometry is still under way. 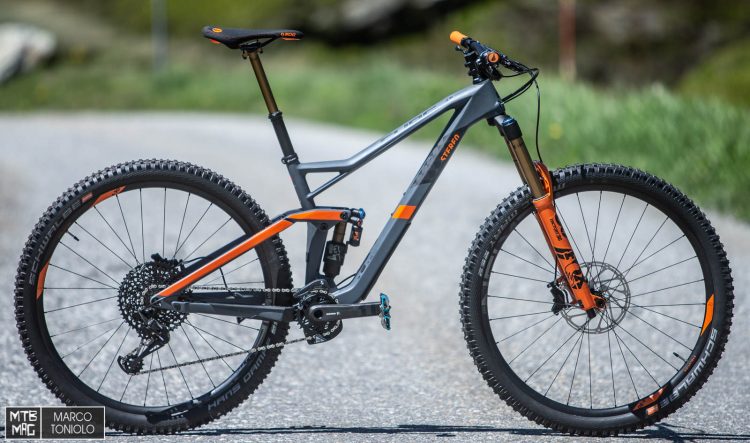 Developed together with the Cube Action Team, whose main athlete Greg Callaghan competes at the top level in the EWS circuit, the Stereo follows the modern trend in terms of geometry, even if it’s not as extreme as other brands. The Cube Stereo 150 is more than just a downhill monster truck: the proven four bar rear suspension with a Horst link, matched by the Fox X2, avoids saggy behaviour on climbs; above all the Stereo has optimal climbing performances thanks largely in part to the 75.5° seat tube angle. 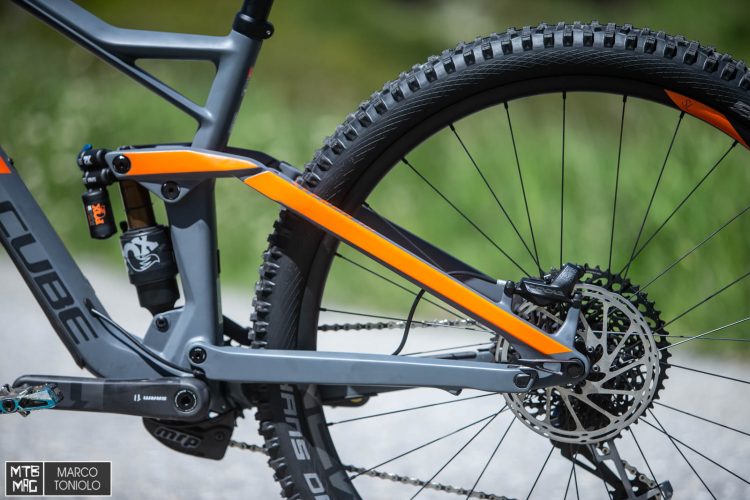 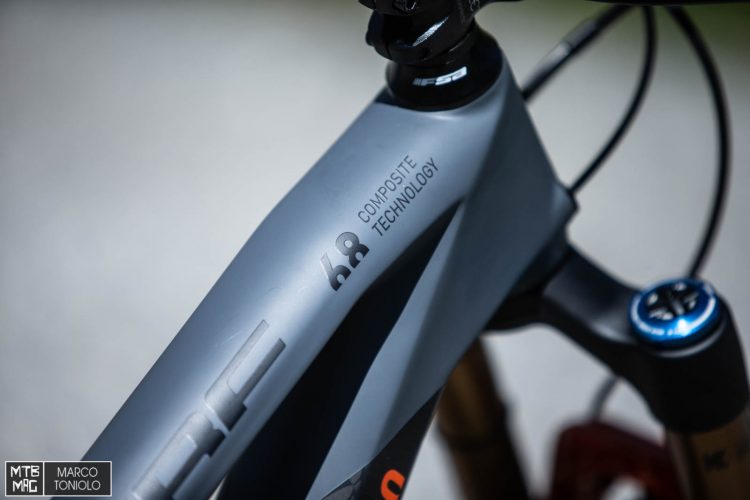 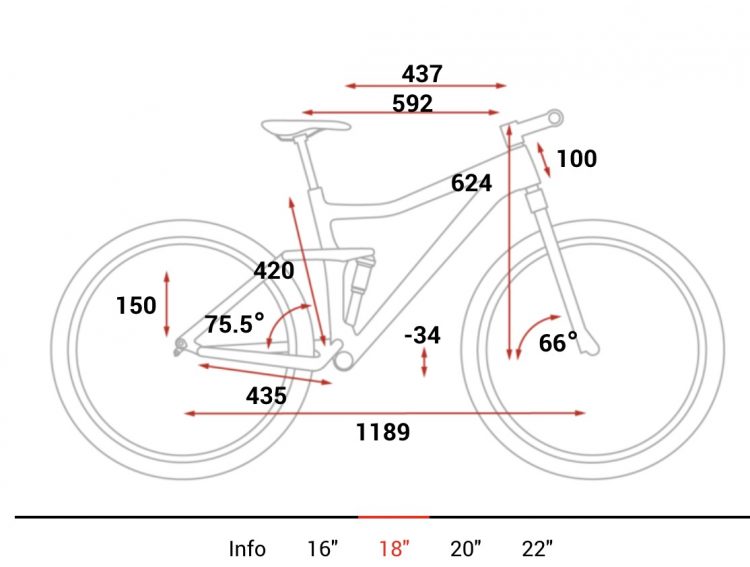 The frame is full carbon, rear triangle included. There are two versions available: the C:62 and the C:68 (which we tested), the number stands for the carbon fibre percentage, the rest is resin the carbon fibre is impregnated with. The more resin is used, the heavier and more affordable the product is. Cube uses a special resin with nanoparticles to reduce delamination. 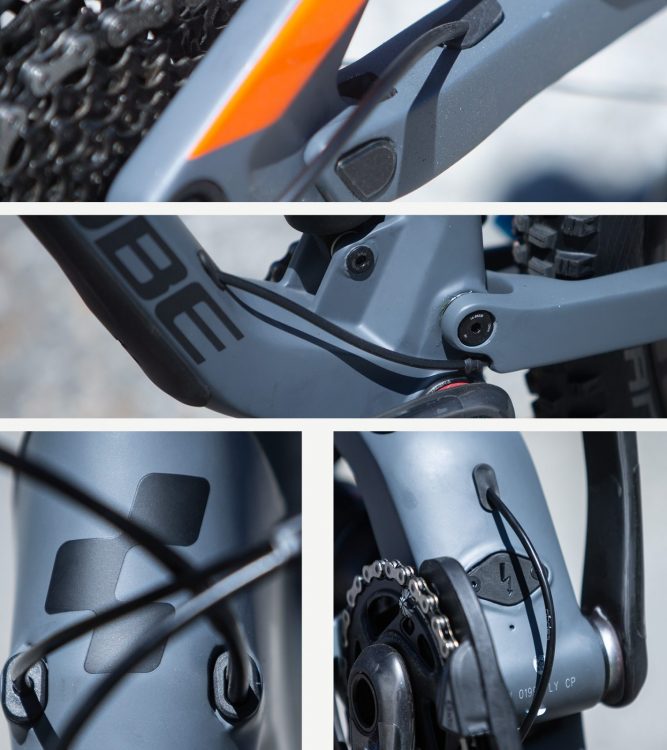 148 Boost, fully guided internal cable routing, brakes included. Water bottle cage space for a 750ml water bottle, trunnion mount metric shock to shorten the overall length, ISCG05 mount for bash guard or chain guide. It’s also possible to install (for those who still like it) a double chainring and the DI2 system, with a specific battery slot under the bottom bracket. 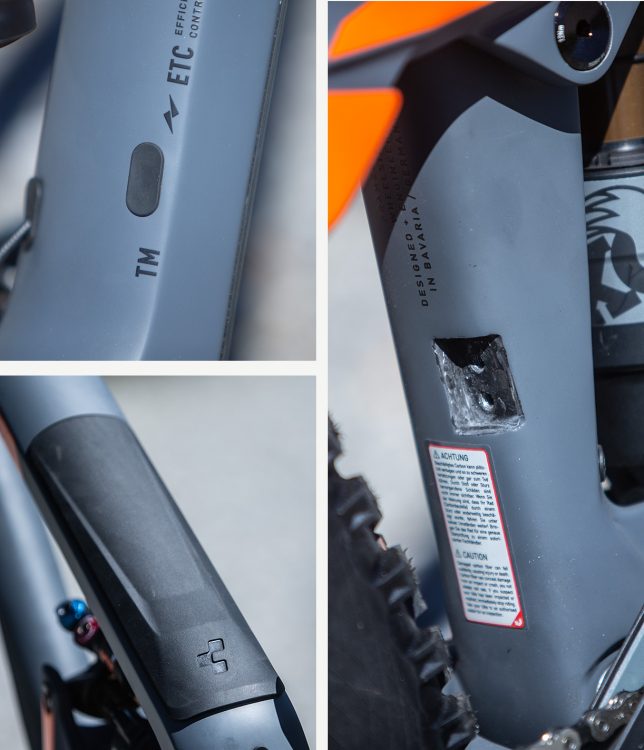 Every pivot of the rear triangle moves on hidden sealed bearings, an aesthetic choice rather than a technical one. The rocker arm, made of composite material, is definitely oversized due to the lack of a cross member connecting the seat stays. Anyway, it is still elegant and fits perfectly into the frame overall construction. The seat tube can be accomodate dropper posts with up to 185mm of travel (verified), despite the bend near the rocker arm joint. This feature is great for those who love highly technical trials where you need maximum freedom of movement, almost to the point of buzzing the rear tire. Also well thought out is the guard under the down tube to protect against rock hits, as well as the chain guard on the right stay. Honestly, I didn’t notice any noise from the chain beating against the stay, in fact I really appreciated the quiet nature of the Stereo, even on the roughest terrain. 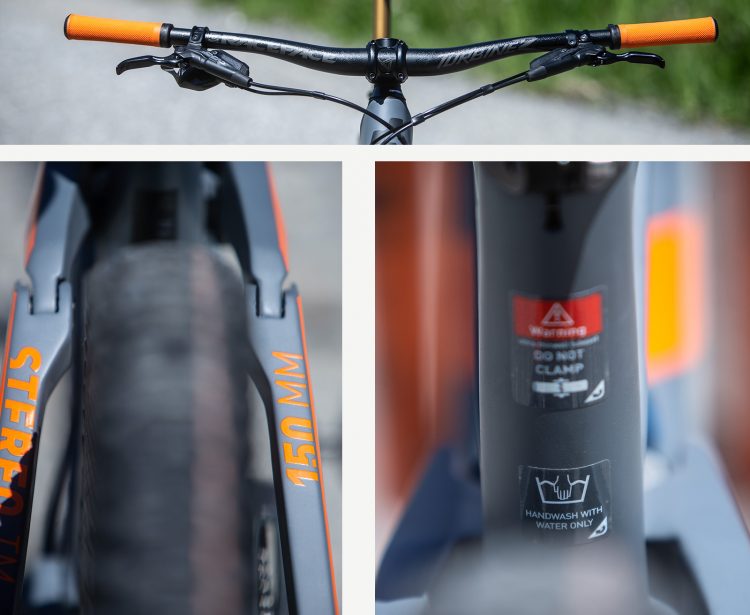 The Race Face Turbine R 35 aluminum bar is 780mm wide with 20mm of rise and 8° of backsweep, it is matched by a 50mm stem. The combo rode very comfortably, right away. The SDG Slater grips have a small diameter but give you lots of feedback from the ground without tiring your hands, thanks to the firm grip provided by the irregular surface. The Sram Code R brake levers can be easily pulled with just one finger. On the contrary I was not that happy about the remote of the Kashima coated Fox Transfer Factory dropper post with 150mm of travel. The post itself was excellent, but the lever control requires a lot of strength to be activated with the thumb, which is rather uncomfortable during a tough ride. 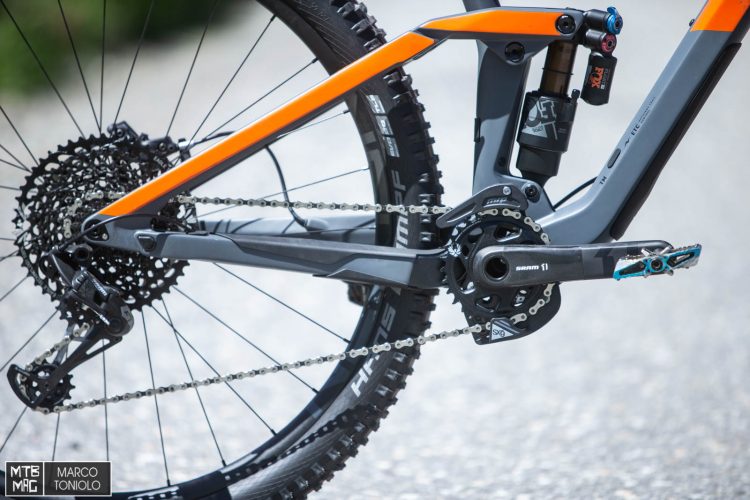 During a two-months-long period I’ve had the chance to test the Cube Stereo 150 in various riding conditions. Most of the times we climbed up, but once we did take advantage of the shuttles at Carosello di Livigno. I also did some all-mountain trails, riding 80-100km in one ride with more than 2000 vertical meters.

The Stereo 150 is meant to be a downhill weapon, so don’t expect to take all the KOMs on the climbs. That said, I’ve been surprised by how well it climbs on steep technical sections. The 75.5° seat angle helps by shifting the weight forward, thus keeping the front wheel planted to the ground. Setting the Fox Float X2 Factory in firm position using the handy lever, the suspension doesn’t sink too much and still is quite reactive. The 30T chainring helps to go through the steepest sections smoothly. On asphalt the overall weight is an issue, in particular that of the Schwalbe 2.35” Super Gravity tires (1,250gr), and the high rolling resistance of the Hans Dampf at the rear. 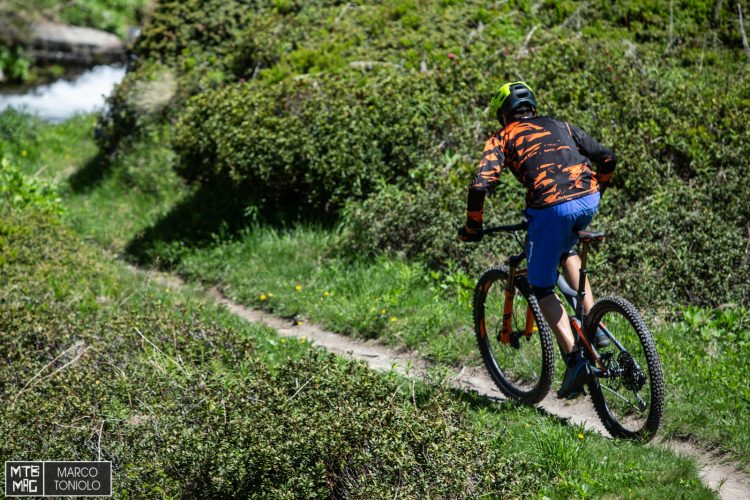 The effort of the climb is washed away after a couple of meters downhill: here the Cube gives its best. The Fox Factory suspension performance is unquestionable and the wagon wheels simply smash everything in their way. It took me a while to perfect the various settings as there is a great deal of range front and rear. It is easy to adjust the suspension behaviour according to your riding style by tuning the high and low speed compression and the rebound. Cube declared to have decreased the anti-squat value in order to have a more reactive rear suspension. This also increased the compression curve linearity to give the averager user the possibility of using all of the 150mm of travel. Actually, I noticed it is a bit too easy to bottom out, but I solved the issue by slightly increasing the air pressure and closing the high speed compression by a few clicks. 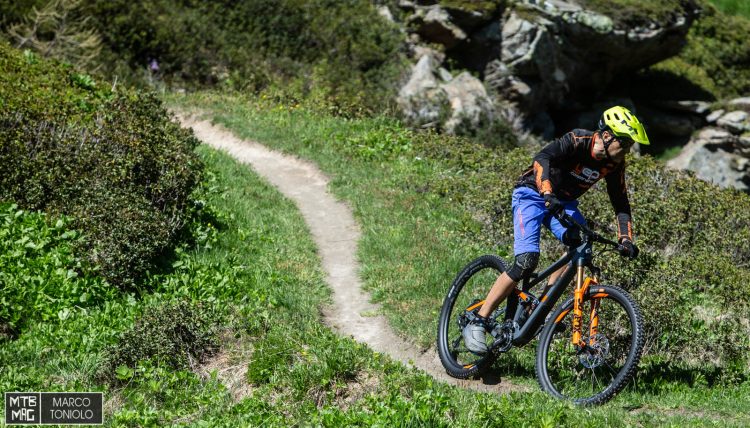 The Newmen Evolution SL A.30 28/28 spokes wheels with 30mm inner channel coped very well with the stress, although the 65kg rider might have been too light to cause any problems. Also the tubeless Schwalbe super gravity tires (Magic Mary at the front and Hans Dampf at the back, both 2.35″) work perfectly: at the front the grip provided was excellent so that I felt comfortable trying some sections that I’ve never dared to before. On the other hand, the Sram Code R (200/180) brakes are not as good, because they tend to make the lever travel longer than their adjustable Code RSC counterparts. 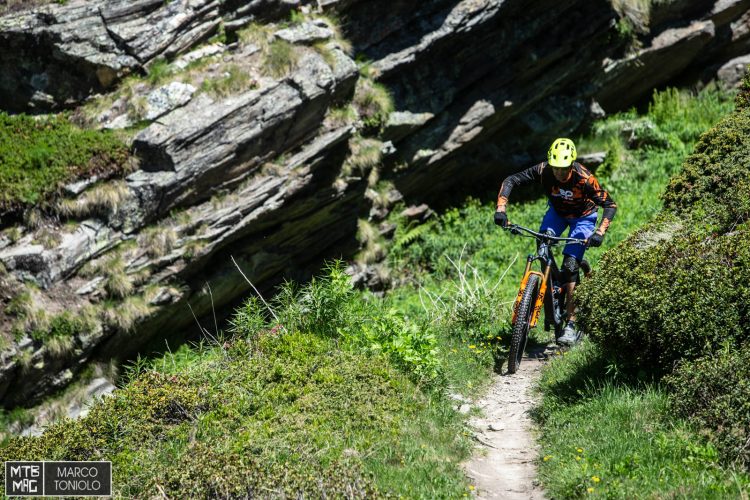 Problems during the test

Opening the box, I noticed the derailleur hanger of the Cube was bent. I fixed it with the specific tool. During the first ride, the shifting was not working properly and at a careful inspection I found out the power-link had been assembled in the wrong direction. I reassembled it in the correct way and the problem was gone.

Apart from this little inconvenience, I haven’t had any other technical problems, except for the fact I had to straighten the derailleur hanger a couple more times. Perhaps because it had been weakened during the first operation (to tell the truth, it probably should have been replaced). 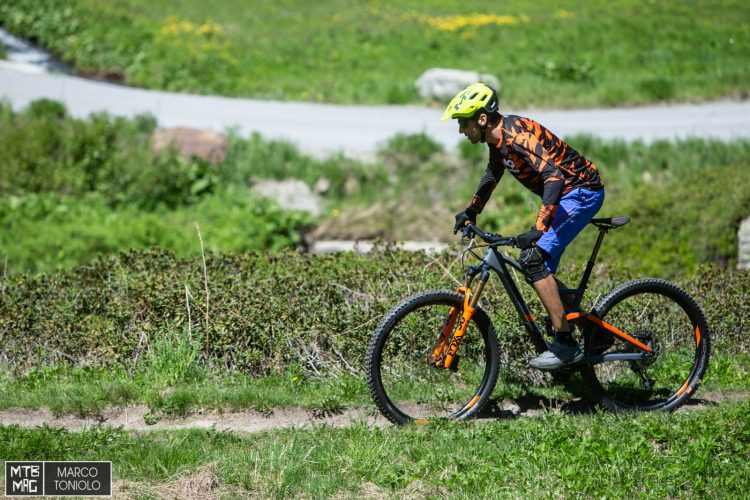 The Cube Stereo 150 is one of those bikes I have a hard time resending back after the test. I enjoyed it a lot in every riding situation. The high-quality frame, the well thought out suspension and the top-end components put this product among the most desired ones, not only by racers but also by riders who look for a 360° bike. Replacing the tires with something lighter would be enough to make the Stereo suitable for long alpine rides. 13.9 kilos without pedals is not a light weight but you don’t feel it that much because it pedals very well.

Clearly, coming at a target price, the project manager had to make some tough decisions regarding components: the SRAM GX cassette and shifter, the aluminium handlebar and the bash guard (in my opinion not necessary) highly contribute to the overall weight, but are still high performance components. A final thought regarding aesthetics: the combination of orange and grey colors is very sober yet aggressive, and it matches the Fox Factory look very well. Versatility is one of the key features the designer wanted to convey with this interesting product. This also means making some compromises, such as a rather narrow rear triangle: I checked that 2.5” tires do fit, but nothing more, and it’s not possible to use 27.5” wheels with “Plus” tires. 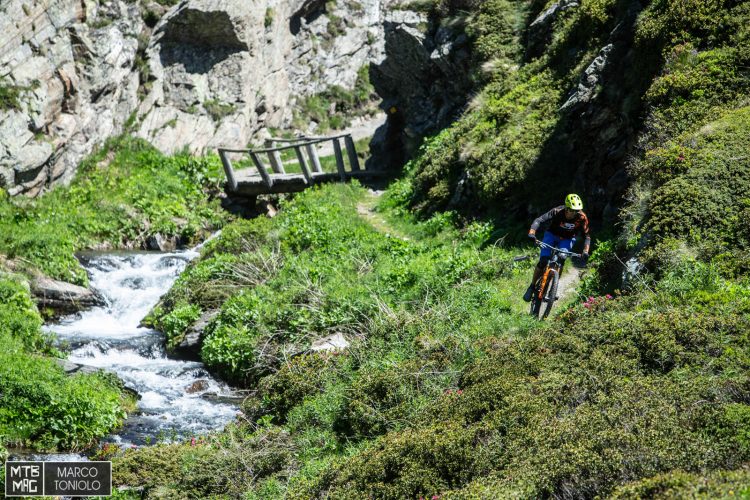