For the last few years, DVO has been making waves in the mountain bike suspension world as one of very few relevant options to the big two players(RockShox and FOX).  The So Cal company is largely comprised of ex-Marzocchi employees who have been engineering suspension for quite some time now.  They started with an upside down DH fork that took a wildly different approach from a design standpoint, then a somewhat straight forward coil shock.  Both feature simple, user tuneable “loader” style compression units.  More recently, with the popularity of Enduro bikes, DVO entered the mid travel market with the Diamond fork.  Now as they move toward the back of the bike we’ve found ourselves testing out the Topaz T3Air shock. 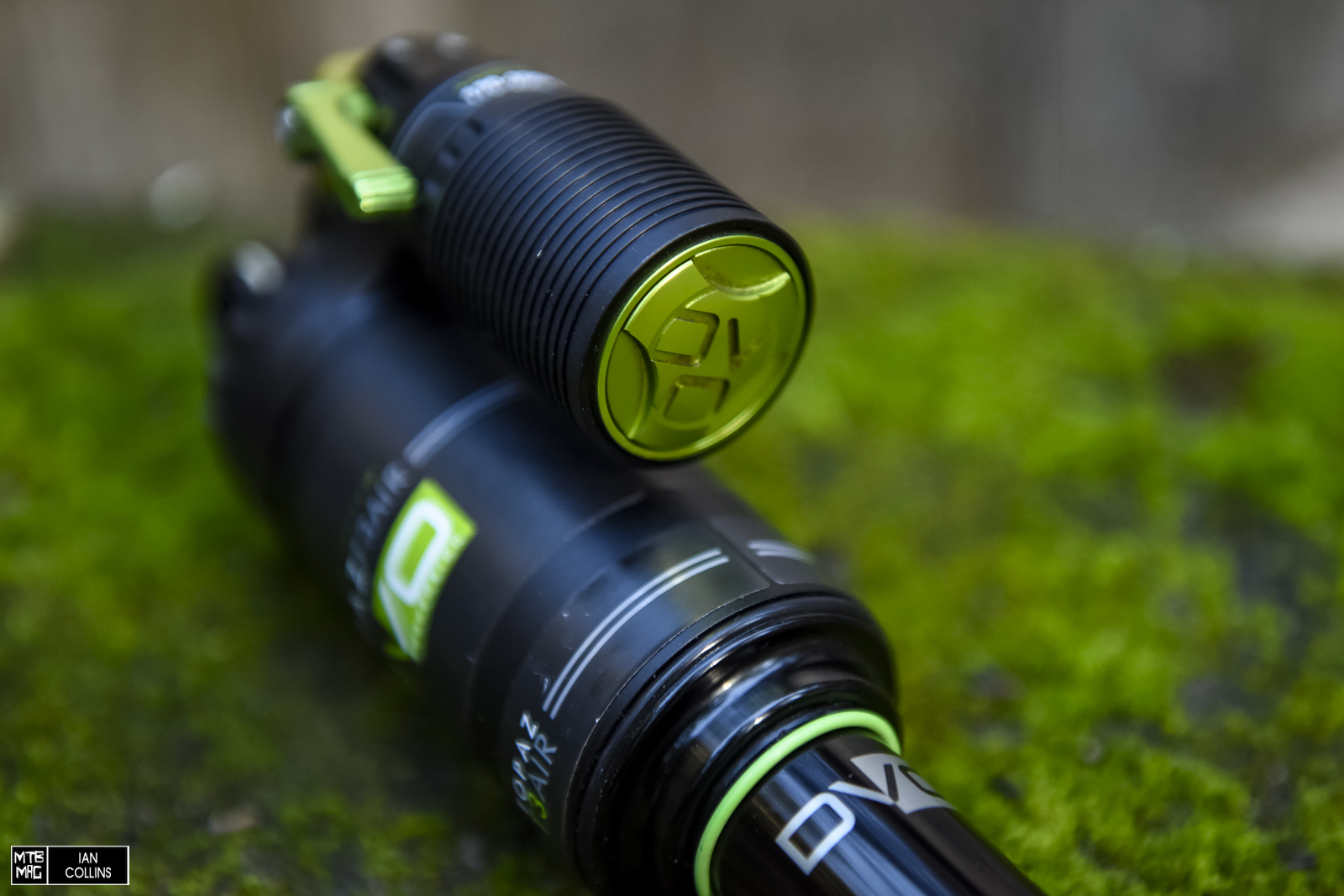 On first glance the Topaz looks strikingly similar to the RockShox Monarch Plus Debonair, and to a varying extent it has a lot in common beyond the aesthetics.  However, once you take a closer look and start dissecting the details, you start to spot some key differences.  The Topaz features a 3 way compression lever that’s pretty standard on shocks for just about anything mid-duty these days.  The rebound knob has 10 clicks which do provide a broad, usable range. 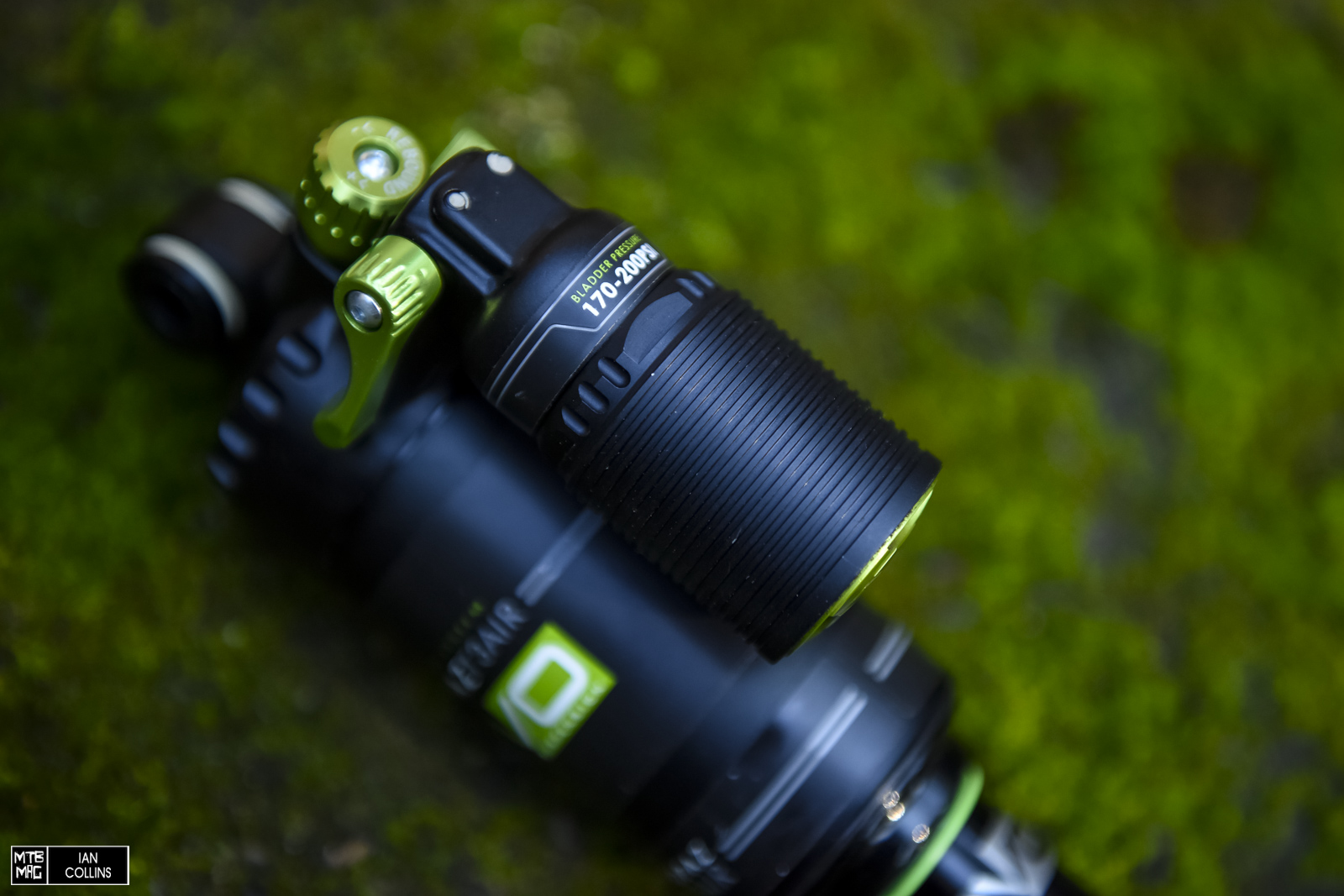 The reservoir itself is where the Topaz really diverges from a Monarch internally and externally.  It has a wider shape and cooling fins which are said to help dissipate heat.  At the back there is a cap which reveals a schraeder valve that allows you to increase or decrease pressure on a bladder from 170-200 PSI.  Changing said pressure has an effect on how firm the shock feels.  Lighter riders should run less pressure, and heavier riders should run more. Inside, the Topaz features a bladder as opposed to an IFP(internal floating piston).  The bladder separates the air from the oil and pressurizes the system.  The advantage to a bladder over an IFP is its reduced seal friction; this offers more traction and provides faster reaction to directional changes. 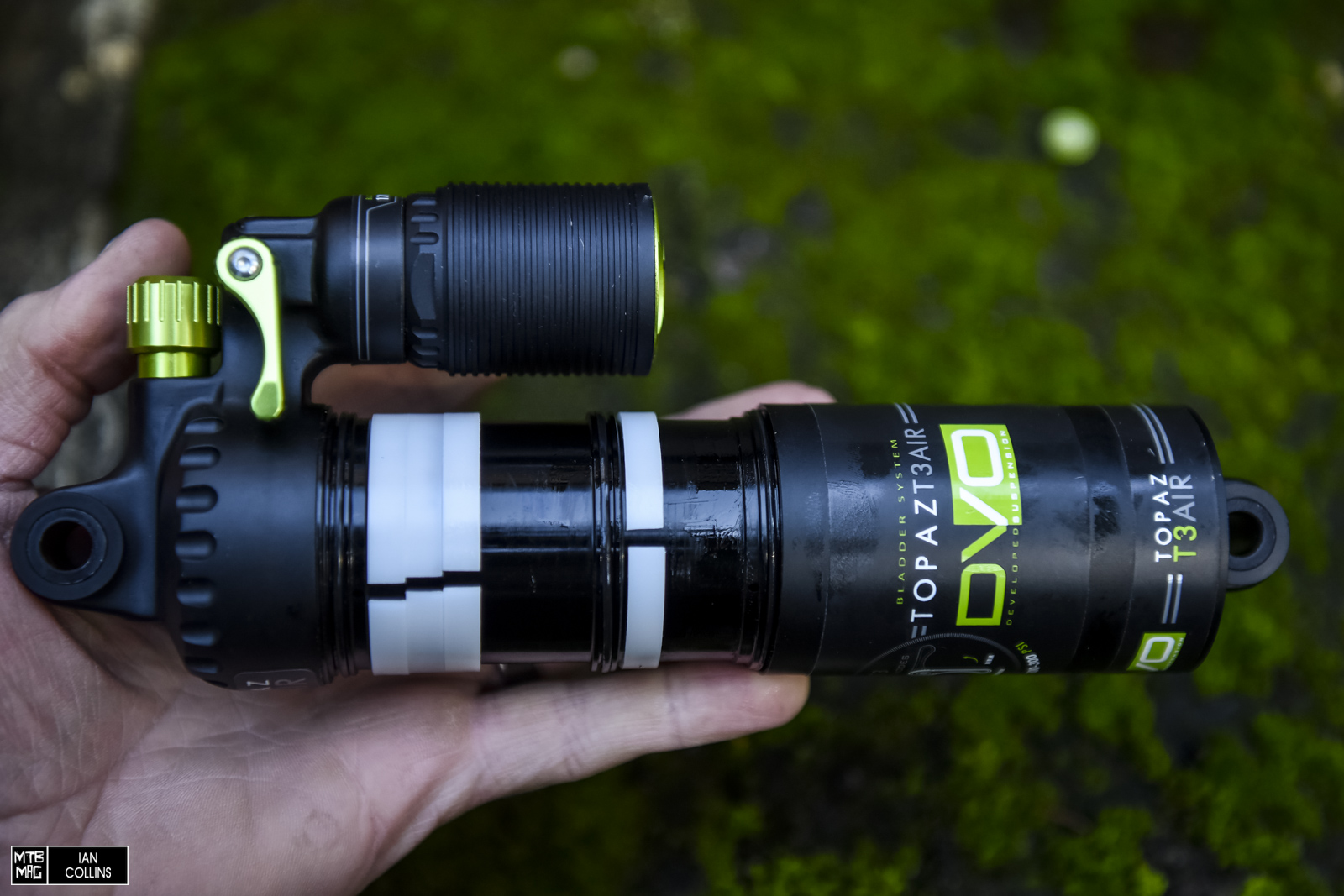 The Topaz has a high volume air can which allows for tuning of both the positive and negative springs.  The can on the Topaz looks nearly identical to the Monarch and functions similarly, but DVO bring something rather special to the table.  Depending on your frame’s layout, you can conduct some tuning without having to actually remove the shock.  This is possible because the Topaz has volume reducers that are clips as opposed to bands.  In the picture above you can see 3 spacers in the positive spring and one in the negative.  This was where we arrived after starting with just one spacer in the positive.  Our tester prefers a great deal of bottoming and mid stroke support.  For the sake of reference, at 185 lbs he ran around 225 PSI in the body and 185PSI in the reservoir.

After the old parking lot bounce around, right away we noticed this shock’s action was incredibly smooth and lacking stiction.  Low breakaway force was always a hallmark of Marzocchi shocks and unsurprisingly, it’s become standard fare with DVO as well.  While we think that some of this is attributable to high quality parts and accurate tolerances, it’s also likely that the bladder is also largely responsible. 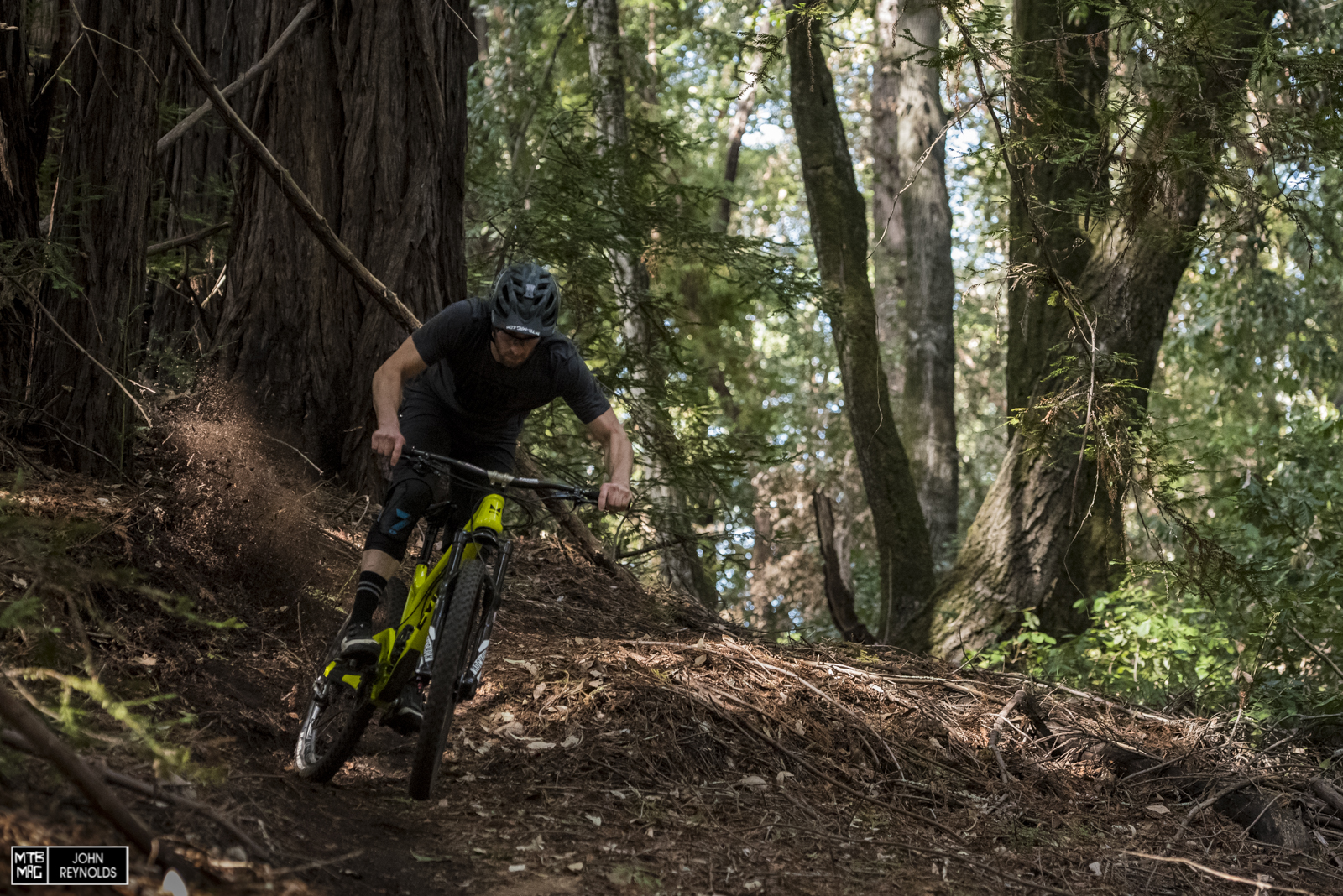 Initially we started with 1 volume reducer in the positive air chamber and worked our way up to 3 in search of more support and bottoming resistance.  With 3 reducers, we got the ending support but found  that we blew through the first part of the travel a bit too easily, so we leaned on Bryson Martin Jr. at DVO for some advice.  He suggested adding a volume reducer to the negative spring.  In doing so, it wouldn’t be overwhelming the positive spring as much, therefore we would see an increase in support in the beginning stroke.  This is something we haven’t tried on other rear shocks, but lo and behold it worked nicely and we hit that sweet spot we were looking for: light off the top, open yet supportive in the middle and offering plenty of bottoming resistance at the end. 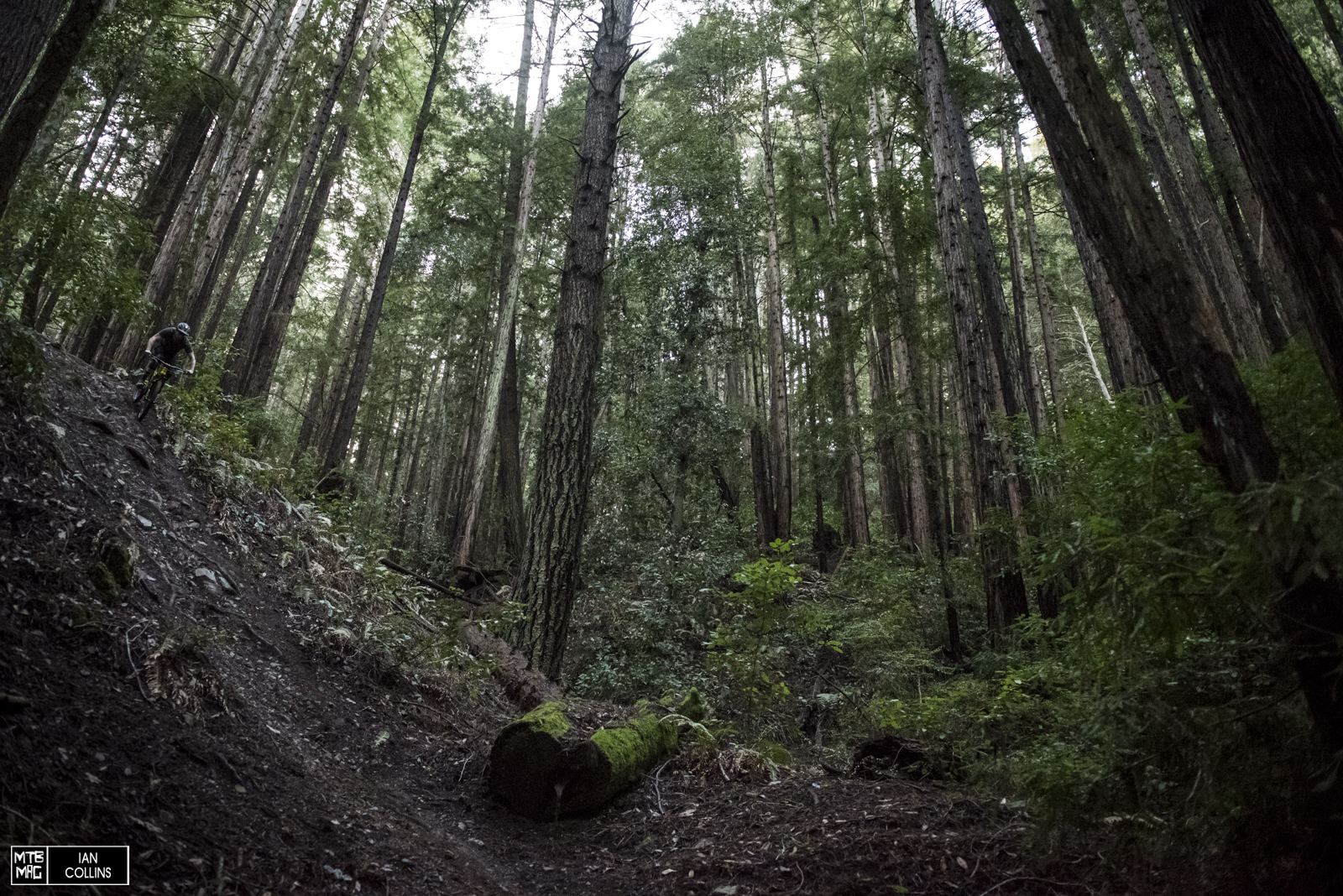 Once set up to our liking, we mainly just rode the Topaz without too much fussing or dabbling, although the high degree of range and adjustability is commendable.   We tested this shock on our Evil Insurgent which we also have ridden and tested 4 other shocks on, thus making it easy to draw comparisons.  We rode everything from rocky, rooty & steep to fast, flowy and jump strewn trails and we enjoyed fade free action on long descents with loads of traction at all times, more than most air shocks that we’ve ridden to date.  Having also ridden the bike with 2 different coil shocks, the Topaz isn’t quite on par, but it’s also about 1/3rd of the weight.

If we had to be critical of one particular thing it would be the vague detents.  It’s hard to count clicks on the rebound adjuster and the action on the compression lever is so light that sometimes we accidentally fully opened the shock up when we meant to put it in trail mode.  That said, we’d prefer that to a lever that’s difficult to move and it’s pretty easy to overlook those small flaws considering the shock’s excellent on trail performance.

So who is the Topaz for?  Well, if you’re racing Enduro or thinking of upgrading to a shock that gives you DH bike level performance, perhaps you may want to just consider a coil shock.  The Topaz does however blur the lines between a mid duty trail shock and a DH style air shock like a Vivid air or a Fox Float X2. Look at it as a nice happy medium between a conventional mid duty air shock and a coil sprung shock. In some ways we found the Topaz to be a better performer than a Fox Float X or a RockShox Monarch, but perhaps not quite enough of an upgrade to warrant ditching your stock shock and spending $500 on. However, if you’re coming off of an OEM inline shock (read: no reservoir) or you have a reservoir shock that’s old, beat, dated or just plain shitty, then the Topaz is probably your best bet for an aftermarket upgrade. It’s lightweight, easily tunable and offers amazing ride quality. The most notable positive attribute is its smooth, supple action and lack of stiction.  It’s nice to see another player shaking things up in the MTB suspension game…the DVO Topaz is a great shock through and through.

[Video] This is Peaty – Last Orders: The Final Episode

[Video] CHRIS AKRIGG – AS IT LIES