A 55gram light with 1500 lumens? These numbers sparked our interest and, after testing the Wilma R7, we wanted to try out the Lupine Piko helmet light. First of all, we weighed the Piko together with its 3.3 Ah SmartCore battery and it is exactly 198 grams. 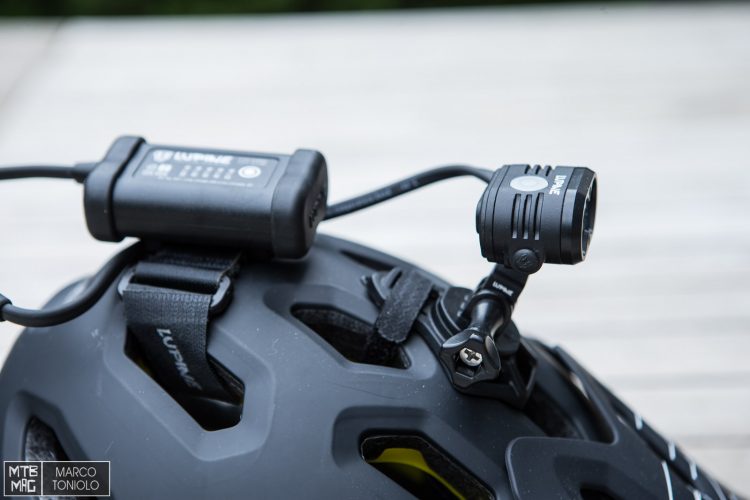 Like the Wilma R7, Lupine shows incredible attention to the detail on the Piko. The lamp frame is made of carefully crafted metal, just like the bar and the helmet mount, and a hex-key is included for adjustments. 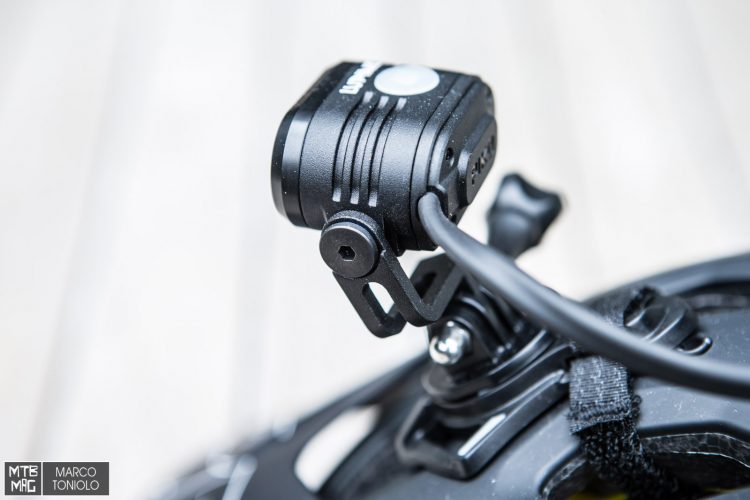 Since a lot of helmets have a GoPro mount, Lupine designed the lamp to be directly installed onto one, with no need for a velcro strap passing through the helmet’s vents. Regarding the battery, you can put it into the backpack using the standard cable extension, or simply use the velcro band. The band is large enough so that it doesn’t move while pedaling. 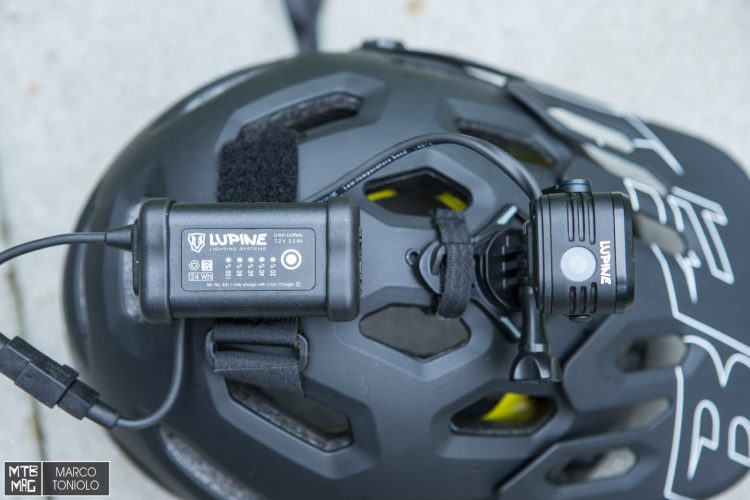 A very handy tool is the bar remote, identical to the one of the Wilma 7, connected to the Piko via Bluetooth. If you set the same number of light levels (3 in our case), it can be used to control both lamps at the same time, to synchronize the power of the two lights. One remote can control a maximum of 5 lights and it is provided with a CR 2032 non-rechargeable battery which can easily be found in stores. 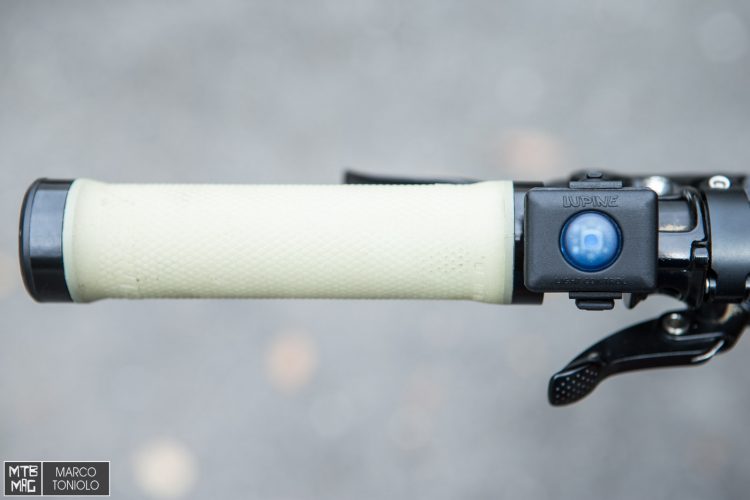 Battery charge status is indicated by 5 LEDs, each bar represents 20% of the full charge, which light up when pressing their specific button. These LEDs work also as rear lights and can be set in flashing or steady mode. 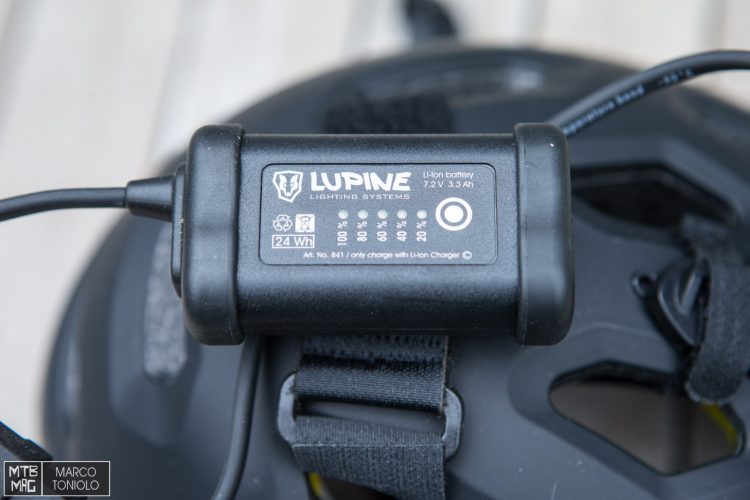 Battery duration is determined by various factors such as temperature and the number of recharges performed, anyway, Lupine gives very precise indications, which we report below. If you ride on mountains, uphill the 0.3W level is already enough, while downhill you need all the power of the 15W level. Since you spend more time climbing than descending, it is almost impossible to experience a blackout with a Piko and a 3.3 Ah battery. When the battery is almost empty, the button changes its color from blue or green to red. When the red light starts to flash, the battery is almost empty. At the bitter end, an emergency battery insures a few more minutes of light at the lowest brightness level. From there you’ll have to go on gropingly.

Thanks to the free app available for iOS and Android, it is possible to manage Piko settings quickly and efficiently. We chose 3 steps: 0.3 W (good for climbing), 5W (flat and pedaling ground) and 15W (downhill). 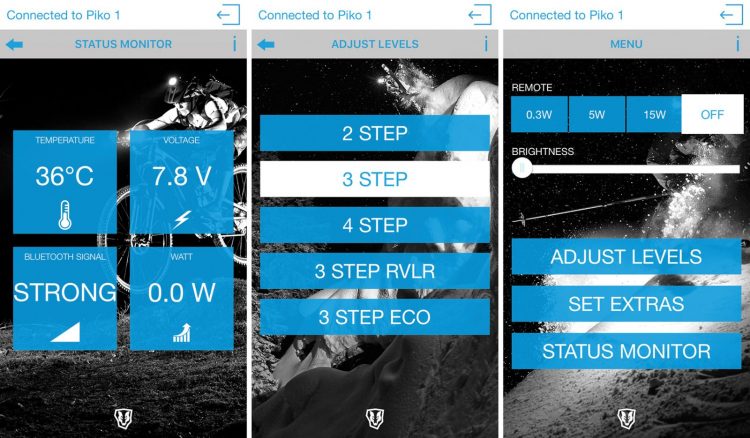 Below you can see the power levels and how the light beam changes accordingly.

Riding at night on a well-known trail makes you see said trail under a completely different light, literally. Without the sunlight, you see shadows of obstacles your mind usually doesn’t record, and everything turns into a new experience. You can enjoy it if your light enables you to ride at a decent speed; that is, if it has enough power…The Lupine Piko, despite being very small, is one of those lights that inspires confidence. Mounted on the helmet, like we did, and matched with a bar light, at night you can ride almost as fast as in the daylight. 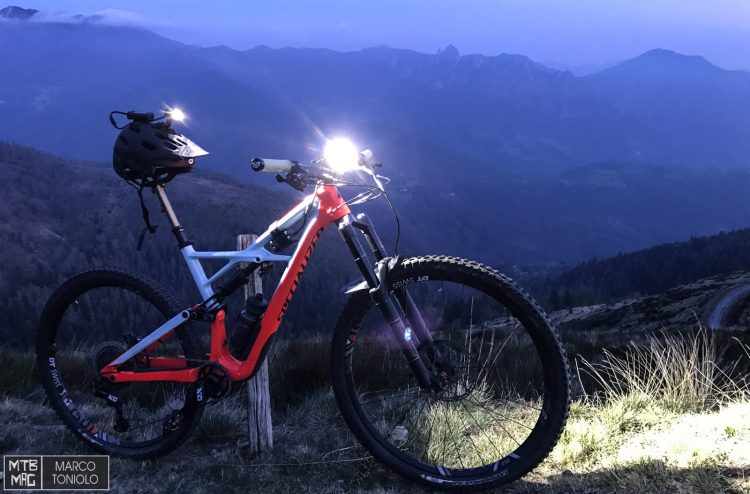 In the picture you can see the Wilma 7 / Piko combination. Now let’s focus on the helmet light, and switch off the Wilma. The light weight is a great advantage, because you can ride long trails without suffering a headache. Don’t forget you can always put the battery into the backpack or in a pocket, if the helmet doesn’t have ideally shaped vents for using the velcro band. The cable extension is plenty. The bar remote is a must-have tool if you don’t want to spend years trying to find the button on the lamp on your head. Especially wearing winter gloves, it’s way easier to press a button on the bar beside the shifter or dropper post remote.

The 3 steps of power are well thought out, in particular the 0.3W one, which is perfect for saving energy on long climbs. The 5W step is good on fast and flat sections, while the full power step with 1500 lumens, even with the Wilma 7 switched off, also allows you to ride safely on technical trails. The light beam is longer than it is wide, so you don’t waste power lighting the sides of the track. It lights what is in front of the rider with a rather neutral temperature (6000K), which is not too cold and artificial, nor too warm and cozy. 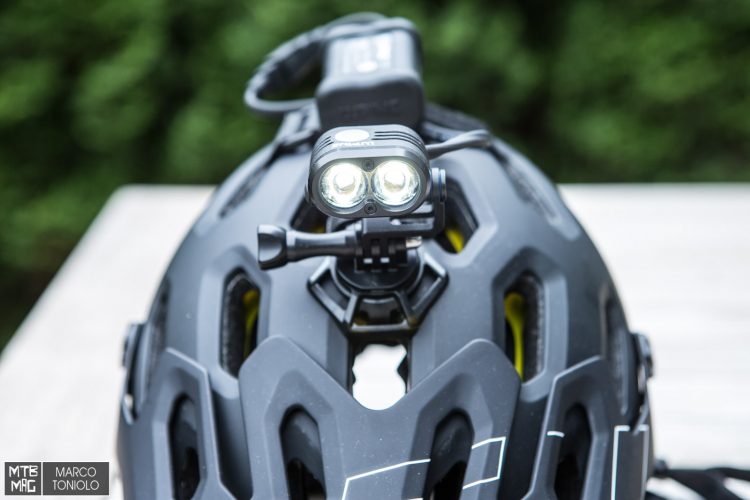 Having the light mounted on the helmet gives you the major advantage of lighting the turns before entering them, because the beam follows the movement of your head and not that of the bar. This is a crucial factor on difficult and twisty tracks if you want to choose the right lines, especially under fast cornering. For this reason, if we had to pick only one light, we’d go for the Piko instead of the Wilma. Of course, the Wilma can also be installed on the helmet, but we don’t like heavy loads in the long run.

We didn’t put the battery to the limit because on a two hour ride with an hour and a half is spent climbing, with minimum brightness level. We can comfortably say the numbers claimed by Lupine for the Wilma are pretty reliable, and the same can be said about the Piko. To run out the battery of the Piko you’d probably have to take part in a 24 hour race.

Light, solid and well finished. The Lupine Piko is a well thought out product, perfect for mountain bike night sessions, even on difficult trails. Thanks to the low power consumption and the adjustable brightness levels for any kind of trail, it is almost impossible to run out the proven battery.