Our test of the previous Orbea Rallon dates back to early 2016, but it seems like ages ago. The new Rallon, equipped with a metric shock, has become a 29er, with a 150mm rear travel and a 160mm front travel. We tested the build one notch below flagship in the range, with a full carbon frame, which is asymmetrical near the shock, and an aggressive geometry set. 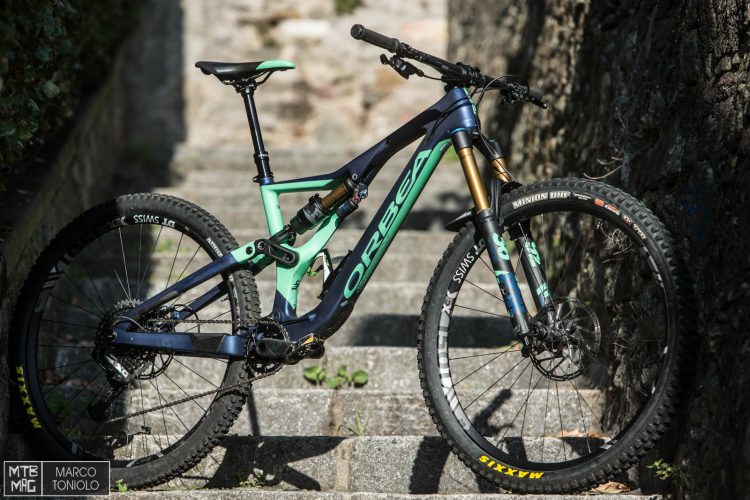 Just like on the previous model, it is still possible on the new Rallon to choose between two settings: “Low” and “Lower!”. You can switch back and forth by means of plates with an asymmetric hole which enables you to change the point at which the shock connects to the rear triangle. It’s a simple system which adds no weight. To switch to the other setting, you need to unscrew the shock bolt, and flip the two plates with asymmetric hole by 180°. 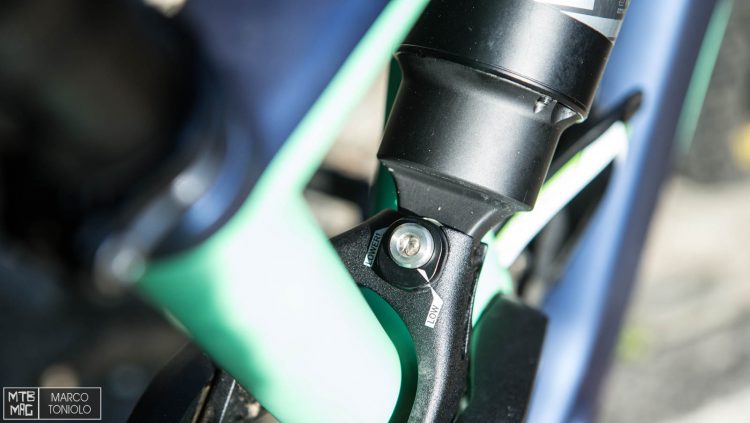 As usual on standard enduro bikes, the head angle number of 65° is also on the new Rallon. Way more interesting is the seat tube angle, which is quite vertical at 76°. The rear triangle is short, with 435mm stays – but not too short, and this characteristic works well on climbs. The tested model is a size Large which, in comparison with the old version, has a shorter reach and suited our 179cm rider nicely.

We didn’t even try the Lower (!) setting, since we rode exclusively on natural tracks which require you to pedal in chunky terrain. The bottom bracket height is low enough in “Low” position, at 343mm. At 336mm, in Lower position, every pedal stroke would have been a risk. 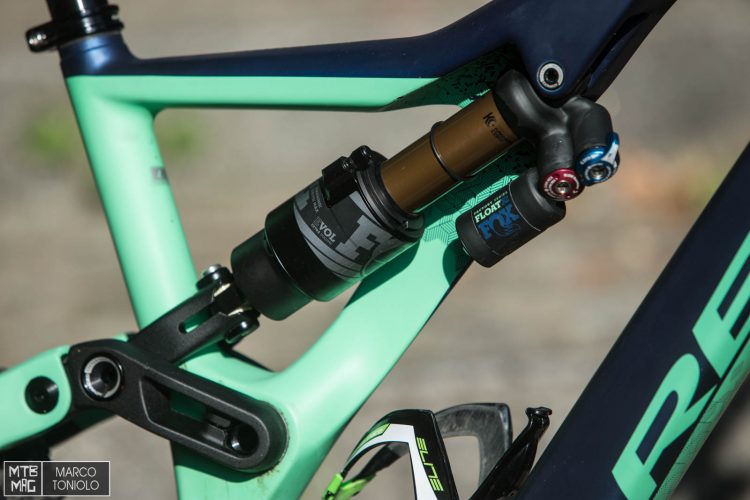 From an aesthetic point of view, one peculiar thing, which we’ve only seen before on the Specialized Demo Carbon, is the asymmetric frame: the shock is exposed only on the right side, while on the left one there’s a triangle placed between the down tube and the seat tube. This could be done thanks to the properties of carbon, and it also enables an easy replacement of the shock. The paint is quite cool: matte and slightly rough to the touch. 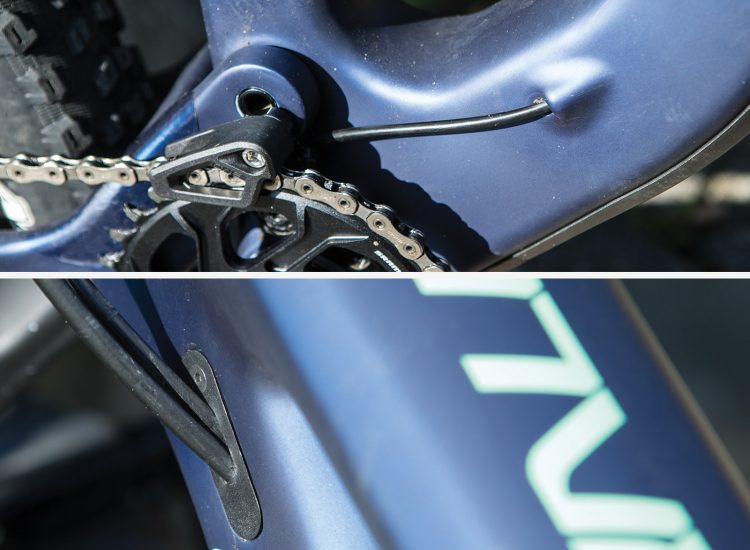 Cable routing is fully internal, rear brake included, and well thought out, especially the passage from the front to the rear triangle. There’s enough space for a water bottle cage, provided you take it out on the left side, because on the right side the piggy back makes it harder to reach it. 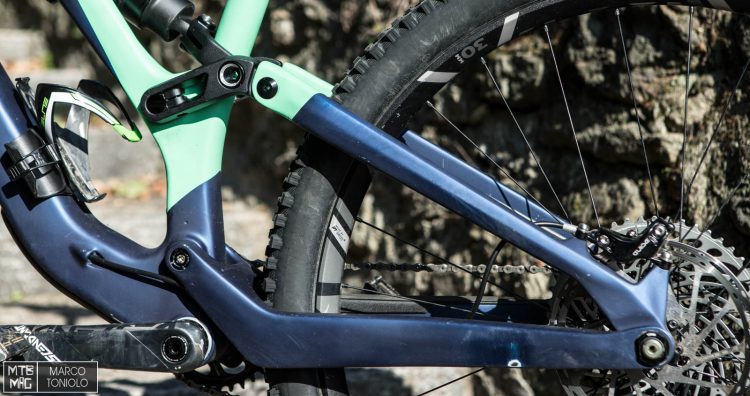 The rear suspension of the Rallon is similar to the ABP by Trek, an assisted single pivot with the rear pivot point coaxial to the hub. Other than that, both aesthetically and practically, there are no more common features, since on the Rallon the shock is fixed to the main triangle and the linkage is placed in a totally different position.

It is worth noting that the leverage ratio of the new Rallon is very low, and it affects the pressure value to be set in order to have the right sag on the Fox X2. Our rider weights 75 kg dressed and with the backpack on, and 135 PSI was enough for him, a rather low number considering that on the Pivot Firebird, with the same shock, he needed 200 PSI. This lowers the stress on the shock, which can be much more sensitive, especially at early travel, but we’ll come back to that later. 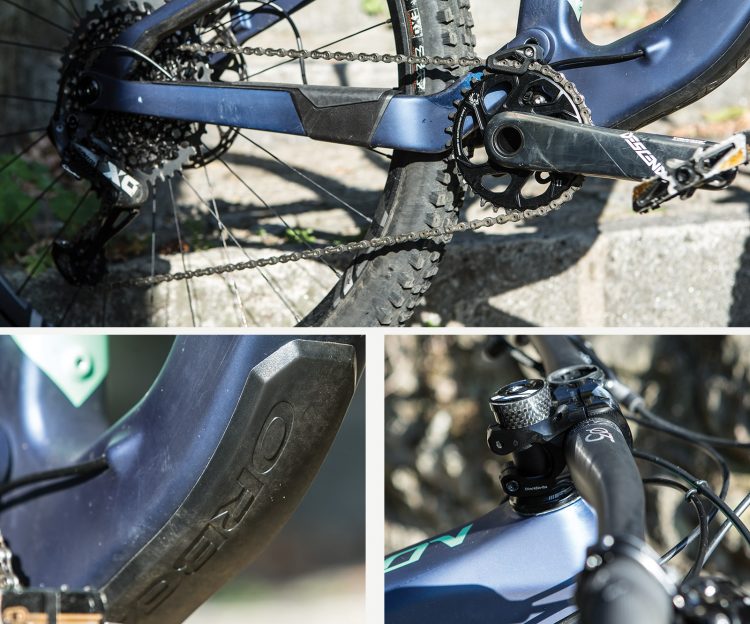 The drivetrain is a SRAM Eagle 1×12 with a 32 tooth chainring and OneUp Components chain guide. The Rallon does not support a double chainring, like many new enduro bikes. The brakes come from SRAM too: RSC Guides. The rotors have a diameter of 200mm at the front and 180 at the rear, adequate for the target usage.

Race Face provided the dropper post (150mm of travel), the stem (35mm), the bar (800mm with a diameter of 35mm in the middle), and bar grips. The latter have two aluminum collars, including an external one which could be annoying to some hands. To solve the issue, RF covered one almost completely, as you can see in the photo.

In terms of performance, wheels and tires are close to the best that one can desire: DT Swiss E-1501 Spline 30c, with 30mm inner channel aluminum rims, matched by one of the best set of tires on the market: Maxxis Aggressor 2.30″Exo TLR at the rear and Minion DHF 2.50″Exo TLR 3C at the front, both tubeless. The choice of a smaller rear tire is appropriate, especially with the Aggressor, which provides good grip at a relatively low rolling resistance, a nice surprise. 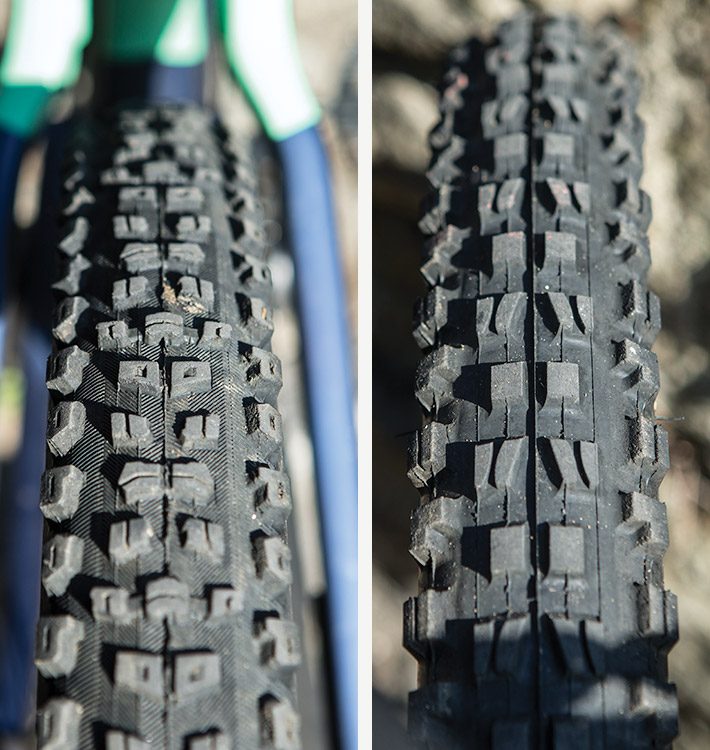 Once more we are talking about aggressive enduro bikes and their climbing performance. Let’s take a step back: is the new Rallon really an aggressive enduro? With 150mm, the rear travel is not extreme, the seat tube angle is the steepest one among the enduro 29ers, and the suspension works a lot at early travel without sinking and diving. With all of that in mind, this is the enduro bike with the best climbing performance we’ve ever tested. Optimal traction, a front end always attached to the ground even on steep grades, also thanks to the rather long rear triangle and good grip but also low rolling resistance provided by the rear tire, which enables you to face long climbs on asphalt without drowning in your own sweat. 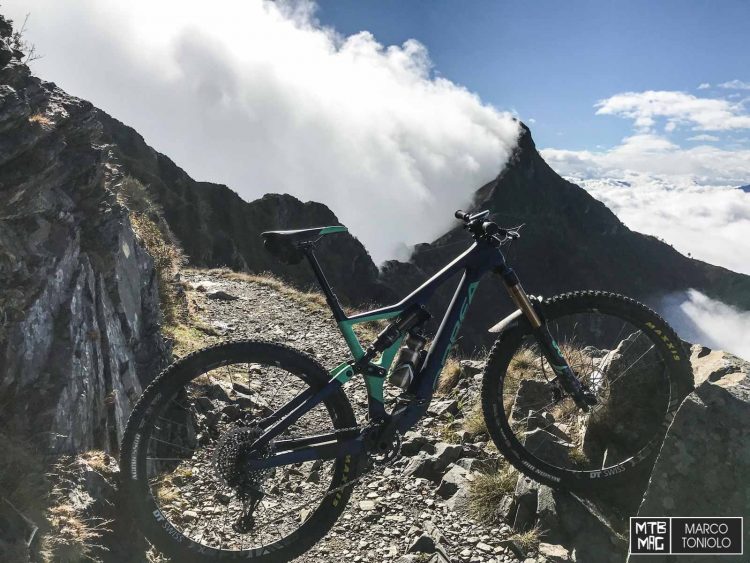 The only slightly bothering aspect is the low bottom bracket, which makes it easy to hit rocks and steps with the pedals, despite having 170mm cranks. We have to underline, though, that with any other bike with the same travel we would hardly climb what we could climb with the Rallon.

The suspension works in a neutral way in response to pedal strokes and, even with the Fox X2 in open position, climbing is smooth, with no annoying bobbing.

A lot of people are still sceptical about enduro 29ers, especially on tracks with tight turns. “They don’t turn”. Since numbers are not questionable, we checked the wheelbase of two 27.5” we tested at the same time of the Rallon: the Giant Reign (1232mm L size) and the Ibis Mojo HD4 (1219mm L size). The wheelbase of the Rallon is 1217mm long on the L size. Of course, the footprint of a 29er is bigger, as well as the rotating mass and consequently kinetic energy, but if you can make a tight turn with a modern 27.5 enduro, you’ll also easily do so with the Orbea, for sure. Furthermore, on such terrain, speed and moving masses don’t affect the performance significantly.

A higher physical effort is required on fast sections, especially entering corners: the rider needs to move with decisiveness on the bike and press the weight towards the front end not to miss the turn, due to the slack head angle and the wagon wheels. The Minion DHF 2.5” at the front provides exceptional grip thanks to the 3C compound and the possibility to ride with low pressure (1.3 bar for our rider), thanks to the wide rims. On fast and rough terrain, the Rallon flies down and the obstacles pass unnoticed. You will be like “where have those roots gone?”

The suspension is probably the best around. In particular the shock: no descent can cause problems to it and there’s no track where you can overheat it – this is aided by the low leverage rate. The rear triangle of the Rallon works a lot in the first centimetres of travel of the Fox X2, which are the most sensitive ones, absorbing small bumps very well. At late travel it becomes highly progressive, so much that we’ve been fairly close to bottoming out only two times, despite running 30% of sag.

Consequently, the bike is very responsive and agile when pumping it on obstacles. It shows it is not always an advantage to have loads of rear travel, if the kinematics is well thought out. Orbea engineers took this road, and it paid off. 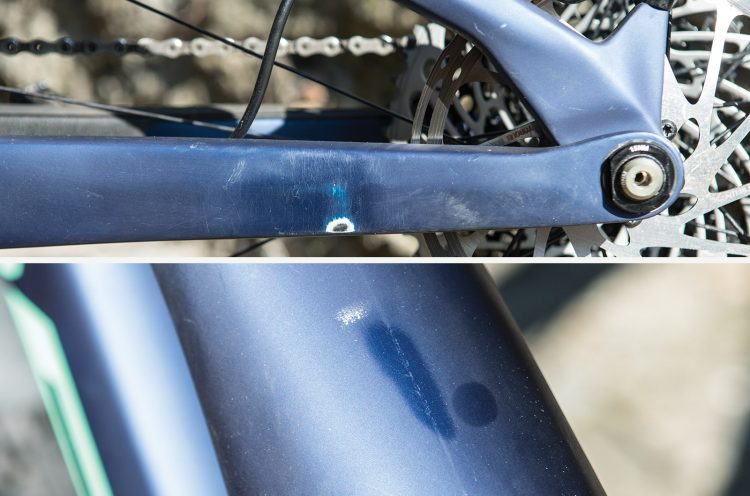 Frame stiffness is optimal, even if it is not always easy to evaluate it on a 29er, because usually the wheels are the weak part. The Rallon, thanks to the rubber protections on the rear chainstays, is very quiet, but the matte paint is quite delicate: the mark on the top tube shown above was caused by a shuttle sling, while the one on the lower chainstay by the rubbing of the shoe. We highly recommend covering the rear triangle with film.

The new Orbea Rallon is an enduro bike which climbs very well and provides a lot of confidence on the downhills thanks to 29” wheels, combined nice, nimble agility, due to the “short” rear travel of 150mm and a short wheelbase. It is maybe one of the most aesthetically pleasing bikes of 2017, with its asymmetric frame and a matte paint which is also nice to the touch. Regarding kinematics, the low lever ratio allows the suspension to be very sensitive at early travel. 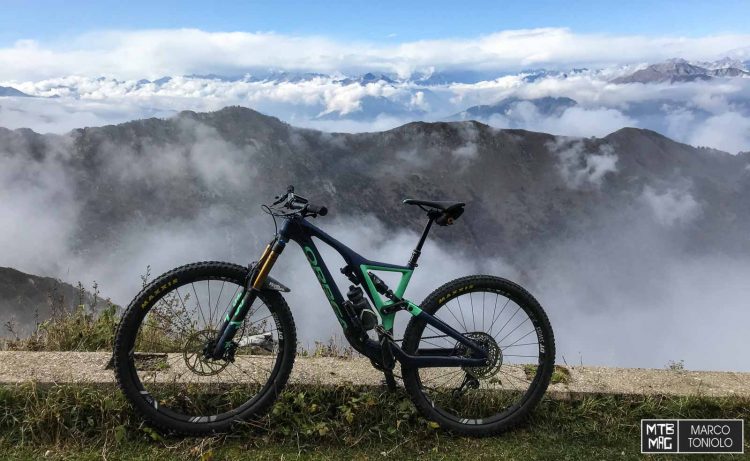 [Video] Respect – A Call to Action for Sustainable Mountain Biking