We already presented a first look at the Pivot Firebird some months ago, when we first assembled it. Andrea Bruno from Tribe Distribution sent us the frame on which we installed components from various brands, such as the Synchro Shift Shimano XT Di2 drivetrain,  to be tested. This first review will focus exclusively on the frame, then we will publish some articles dealing with some of the indivudual components we tested on the bike. 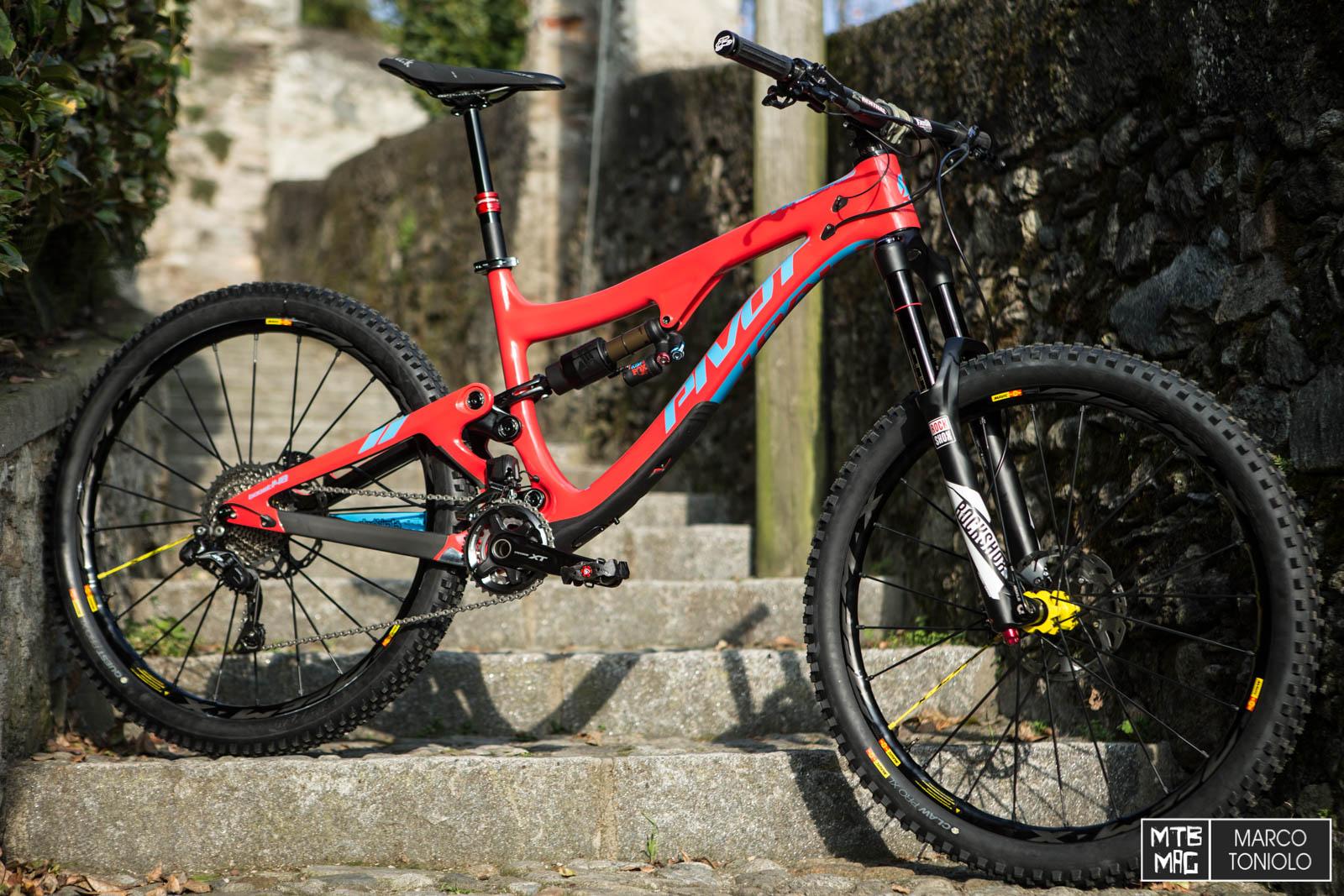 The Firebird is Pivot’s Enduro bike, equipped with a Fox Float X2 (170mm travel). The frame, full carbon, is designed for 27.5 wheels. The Firebird project is inspired by Pivot’s DH bike, the Phoenix, so it is not by chance that it has a really long reach with a forward riding position which helps load the front end. On the other side, the rear triangle is really short with 430mm chainstays and it’s as close to the front triangle as possible from a design standpoint. 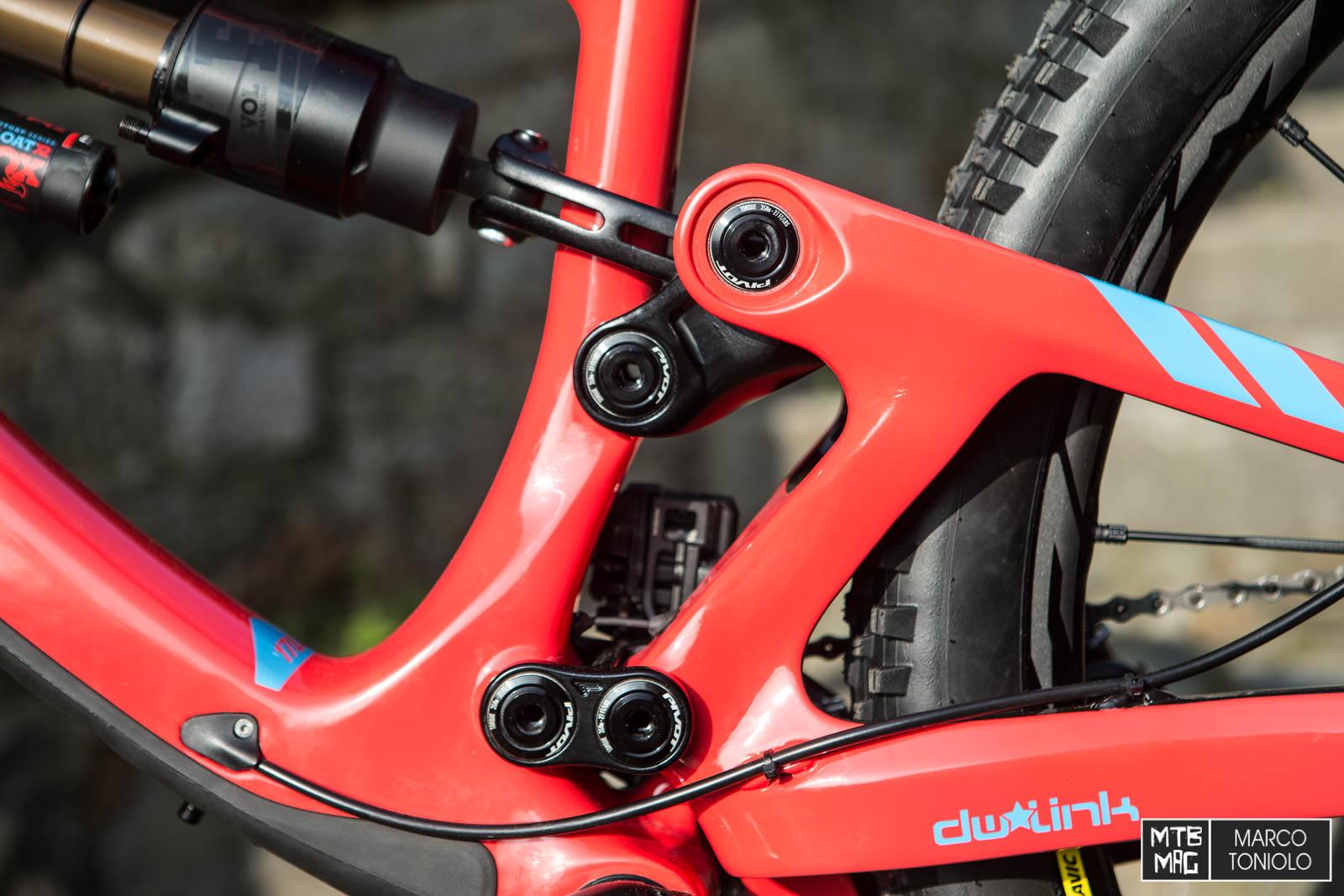 The suspension system is from DW Link, which is utilized on all of Pivot’s bikes. The solid linkage is meant to improve stiffness and the obsessively designed layout make this frame a real jem: cable routing is calibrated to avoid frame wear, the protection under the down tube is large and well crafted (like the chain guard), the electronic transmission battery holder is hidden in the down tube inside a handy compartment. 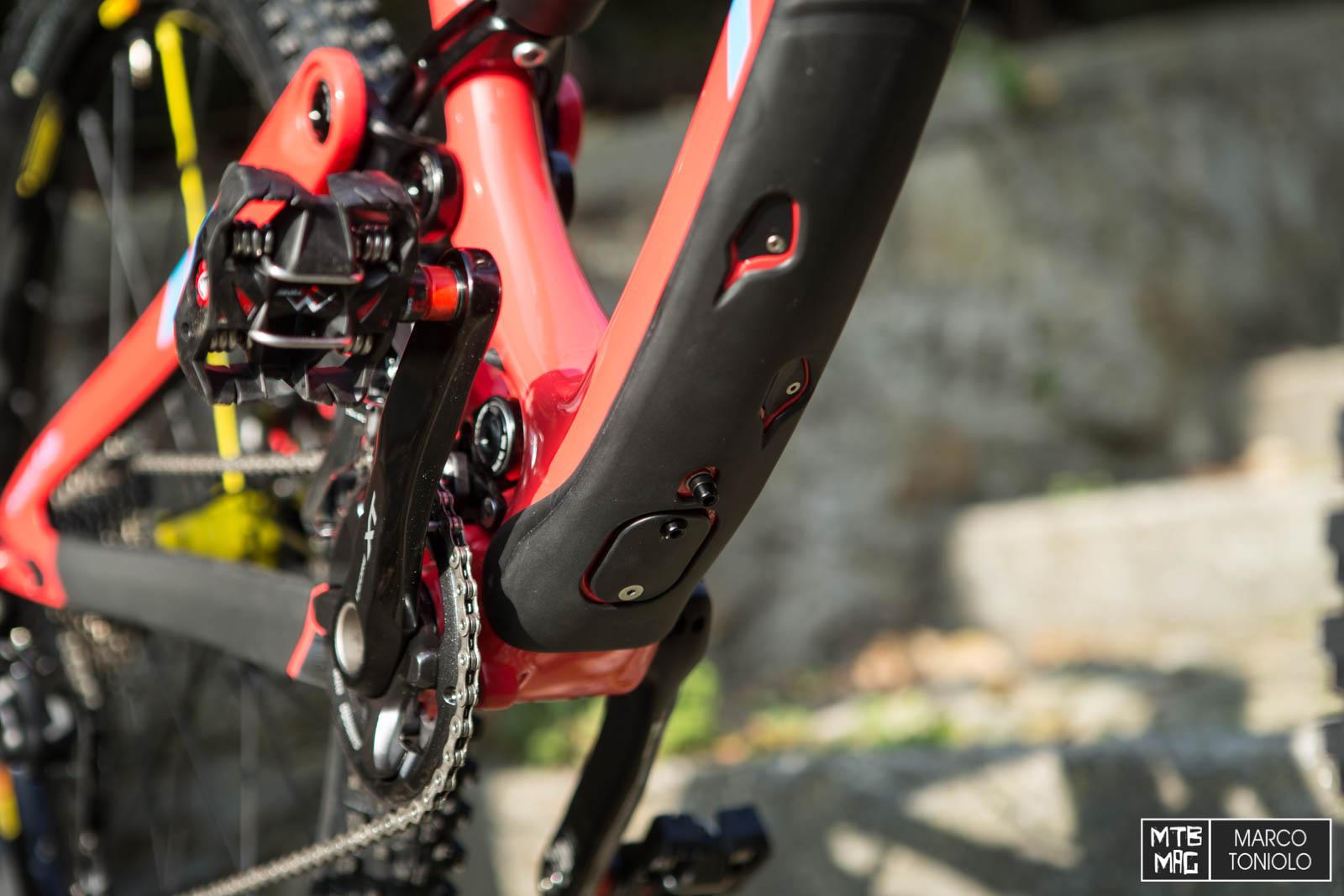 The shock is the Fox Float X2 (here is our test), one of the best air shocks on the market and certainly the most adjustable. With high and low speed compression and rebound adjustments, it is almost as sensitive as a coil shock. It is provided with a lever to partially lock out the compression on the long climbs.

Right after we got the frame, we had to send it back because of the Fox recall. The consequent late shipment of the spare parts delayed our test on the trail. 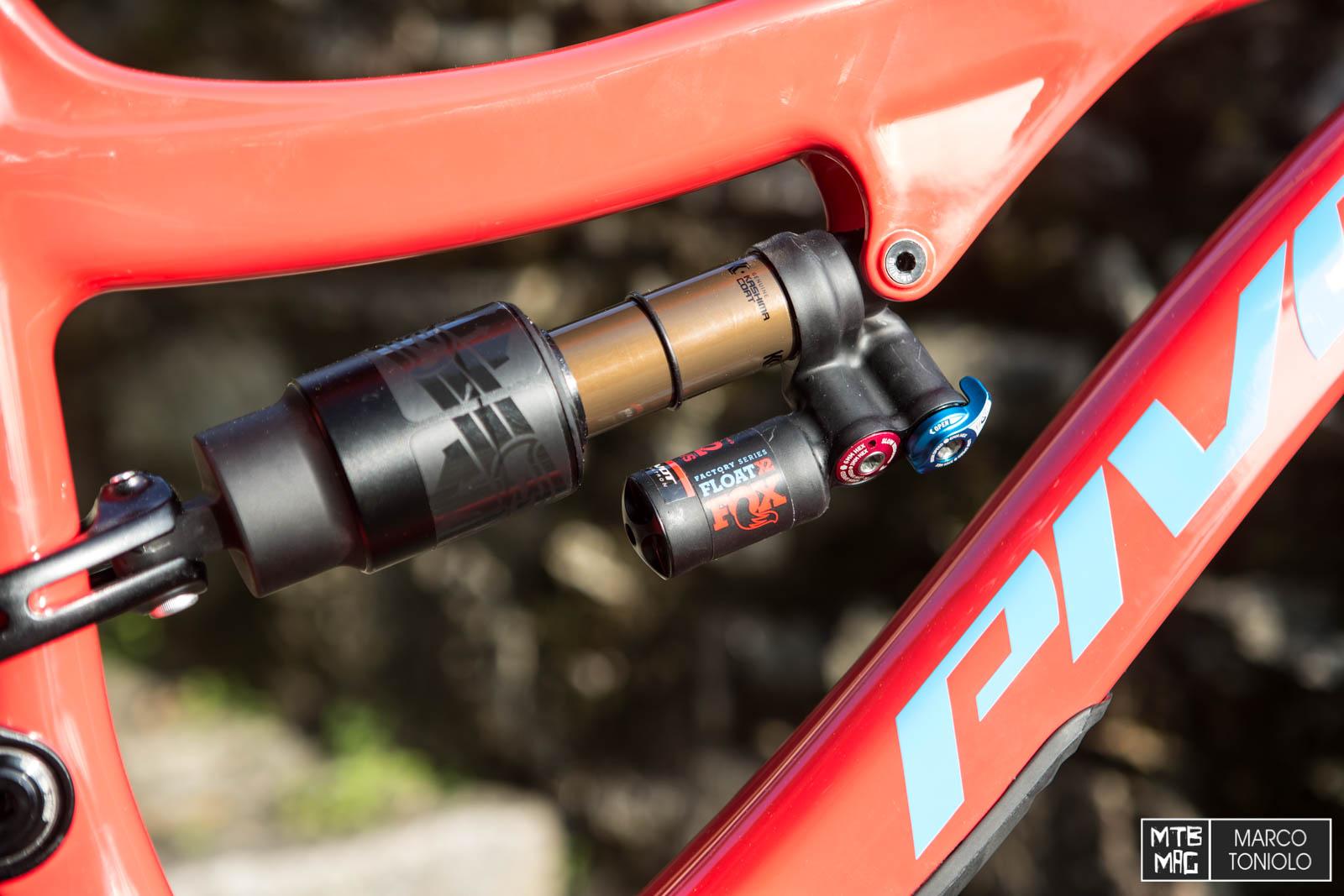 Regarding geometry, like most of the modern Enduro bikes, the Firebird has a really slack head angle: it was measured at 65°. 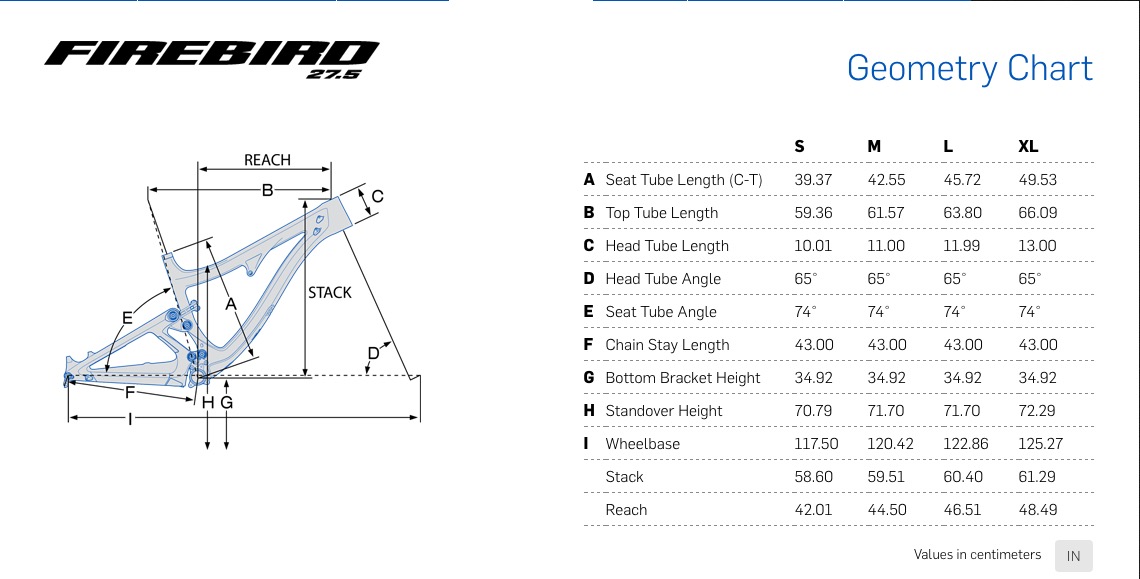 MTB Mag readers know we love the DW Link: in our opinion this is one of the most balanced suspension systems on the market since it works well no matter what shock is installed. Furthermore it doesn’t need to be locked out on climbs because the antisquat helps maintaining a high position and efficient pedaling. The system works really well with no need for levers or remotes when facing a climb. And of course it does work well on the Firebird too, but considering the amount of travel, geometry and weight (14.1 kg), we can’t quite say that this bike’s a mountain goat.

On smooth climbs sections you can just take your time and you can reach the top without too much effort. The 65-degree head angle on technical trails requires a lot of energy to steer in tight corners and keep the front wheel down. In comparison with other enduro bikes we appreciated the forward upper body position which helps on steep slopes. The Fox Float X2, also in locked out position, still absorbs the small bumps very well giving us a preview of its downhill qualities. The bottom bracket is high enough that you don’t really hit obstacles with your pedals. 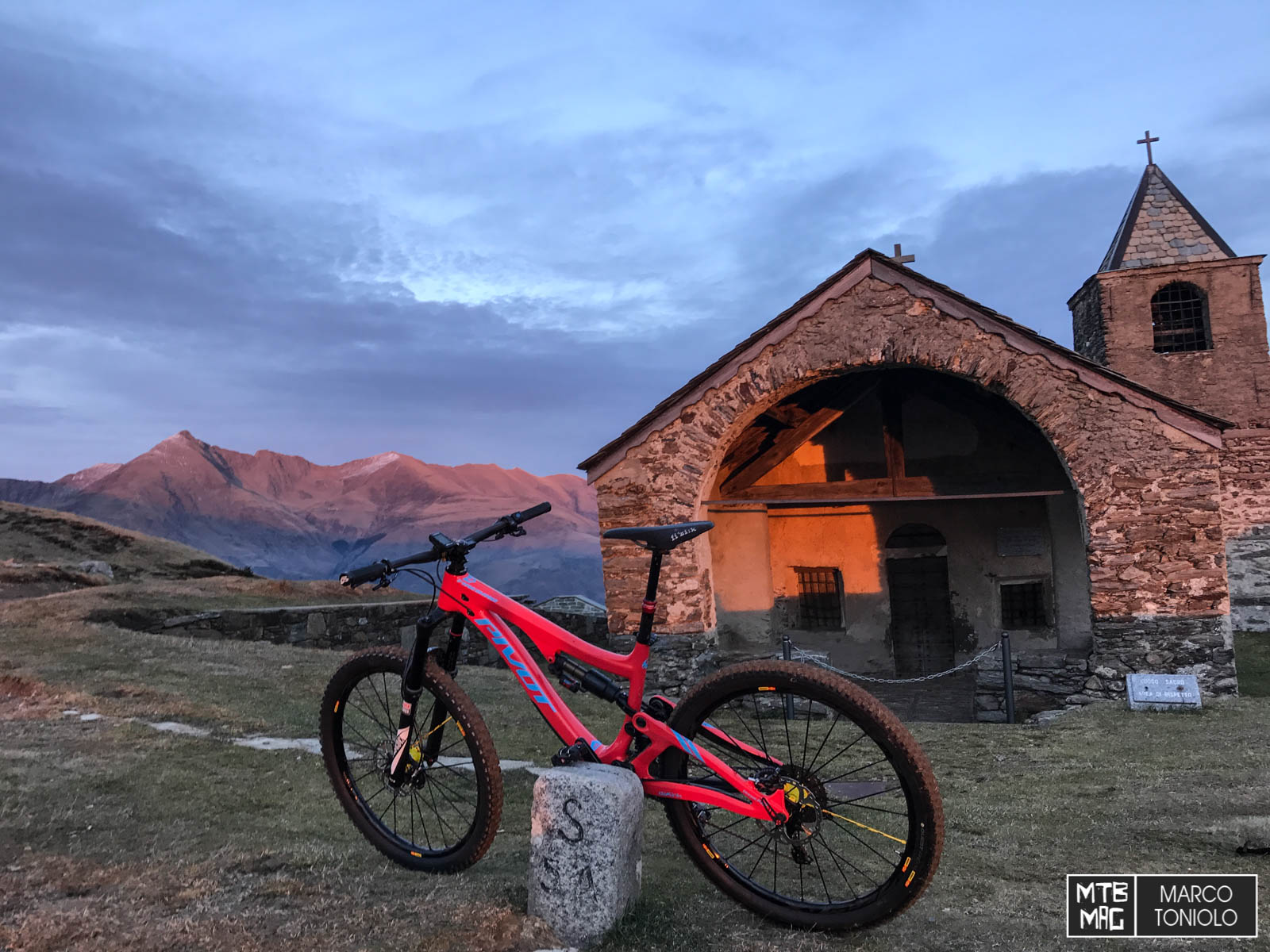 Like other bikes of this segment, you feel relieved to have made it to the top. This is certainly not an all mountain frame, so you have to be ready to suffer in order to climb your favorite mountain. Now let’s see if it’s worth it.

170mm of both front and rear travel is definitely at the top end for an enduro bike, as it begins to border with the freeride segment (or park). This means just one thing: give the Firebird some speed and you’ll be rewarded. The faster the better. The most incredible quality of this bike is fast cornering. With the Lyrik the front suspension soaks up everything, conveying a sense of total control. Most of all it is really easy to lay over and push the bike inside the turn to gain more speed. This behaviour is partially due to the suspension system, but also to a great balance between the long front triangle and a short rear one. The first one provides stability, the second one agility and on the Firebird everything is amplified by the overall stiffness of the bike.

The Fox Float X2 does its job being extremely sensitive. As for the behavior, the Pivot is pretty linear, but it manages to feel supportive and avoids wallowing in the mid stroke. That’s a characteristic thats difficult to find but Weagle is notorious for striking that balance with his kinematics. As for the big hits, we would have added one or two more spacers if we had them, since we almost bottomed out even running 25-30% sag. You’ll want to do this if you mostly ride park, otherwise on jumps bottoming out is pretty inevitable. In winter we didn’t have the chance to take cable cars for the test but it’s on the list for the next months. 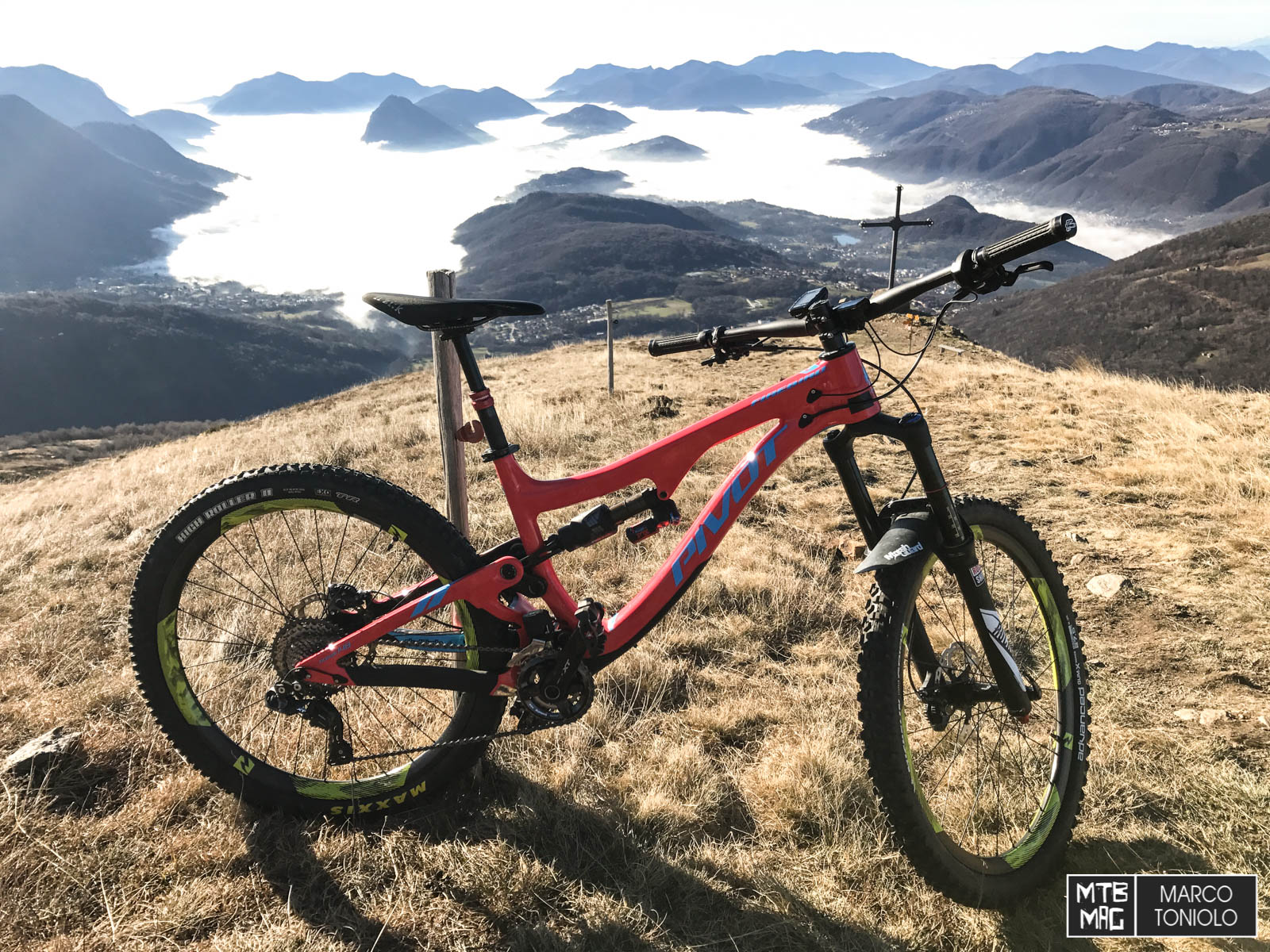 This bike is meant to compete in EWS style races, but how does it behave on narrow and ragged terrain, the most common type in the Alps? The long travel helps coping with big bumps but the most impressive thing is the agility and ease of steering in tight corners. Everything is relative, here we’re talking about a bike with 170mm of travel and a 65° head angle so while it can’t be quite as maneuverable as a trail bike, it is still really agile. As already mentioned, the funnest sections are the fastest ones, both in corners and pumping over obstacles. The short rear triangle helps you lift the front end which would otherwise be anchored to the ground considering the top tube length. Long story short, the bike manuals like a champ.

The other side of the coin of keeping the rear as short as possibile is that all the dirt which comes from the rear tire goes onto the lower link, and gets ground by the movement of the triangle, in turn scratching the paint.  At first we were pretty shocked since already after the first ride there were some rather deep scratches, then we discovered that other brands have the same issue (Specialized Enduro for example). This doesn’t solve the problem but at least now you know about it and you can try to install a little protection in advance. 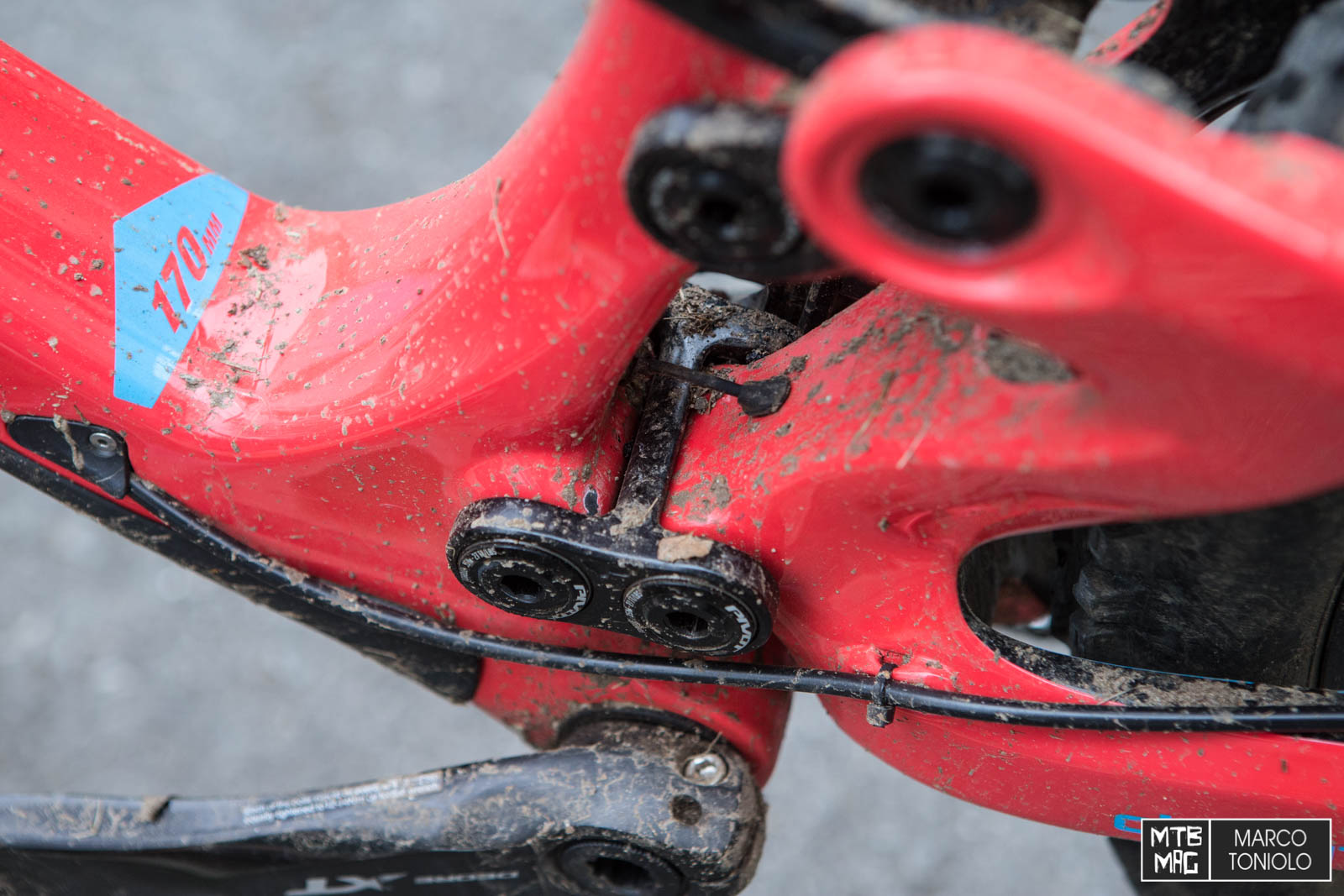 The Pivot Firebird is a bike for charging hard, for those who love full speed on the downhills but still enjoy sweating (a lot) to conquer the top of the climbs. The more you let it flow, the more you’ll enjoy the bike, in particular on fast corners, where you can lay into them and pick up speed; thanks to a well balanced geometry with a long reach and a short rear triangle combined with a great overall stiffness. The rear suspension is one of the best on the market, thanks to the DW link and the Fox Float X2. The frame is very well finished but pay attention to the mud that deposits between the frame and the triangle which can possibly scratch the paint. Put some protection on before the first ride, it would be a pity to ruin such an amazing frame.

Introducing the Troy Lee Designs A2