[ad3]FOX Racing Shox recently went through a sea change of sorts. At least as far as their gravity oriented rear shocks are concerned…To start, and most notably, they shifted from a mono tube design to a twin tube design. Additionally, they have poured a great deal of R&D efforts into engineering competitive air sprung damper. Those efforts have clearly paid off as Aaron Gwin won the 2015 overall World Cup title aboard the resurrected FOX DH air shock. Back in August we bolted one up to our Scott Gambler. After 6 months of abuse it’s high time that we pass on what we’ve learned from riding it. 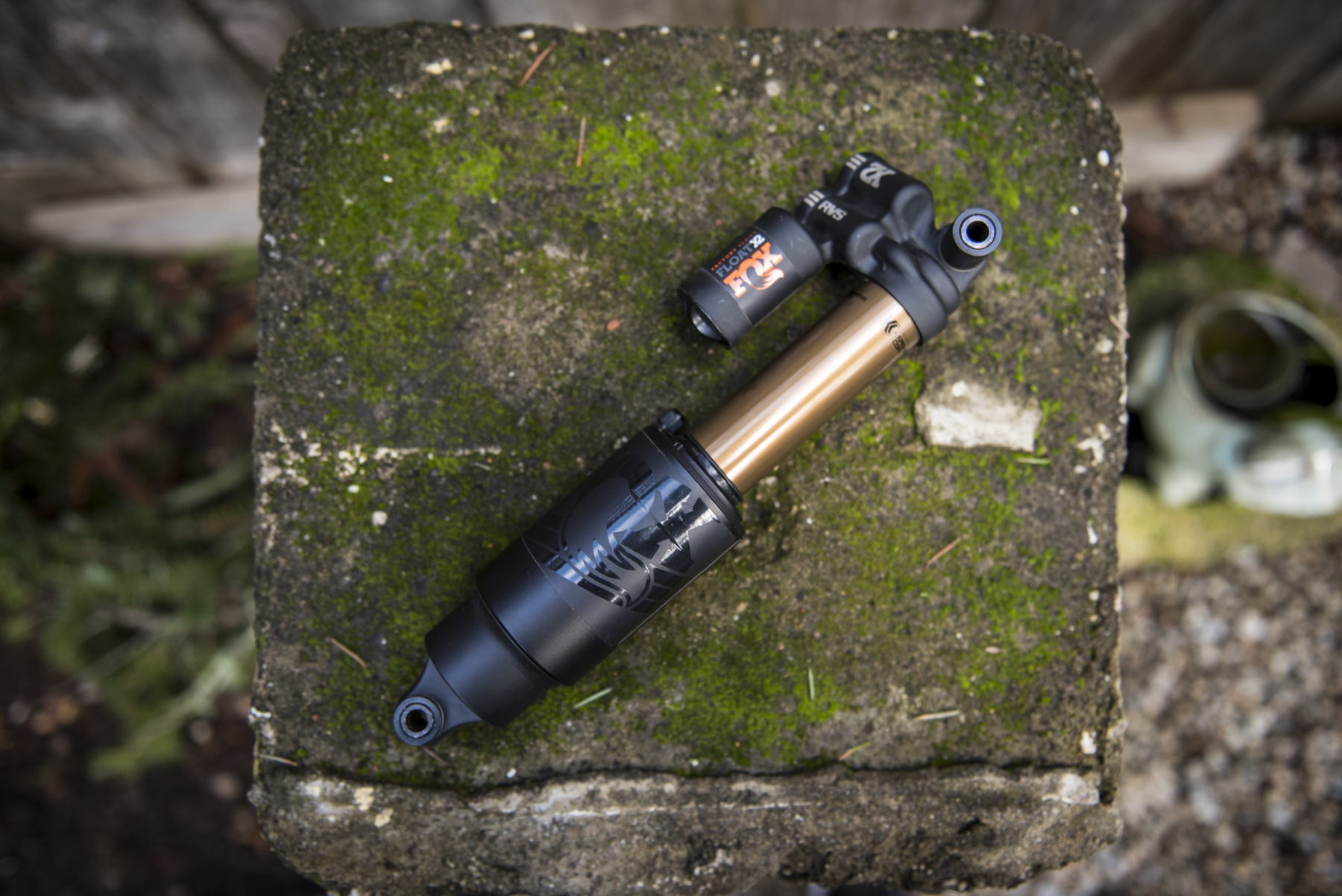 If you’ve been paying attention to gravity suspension at all these last few years, after taking one glance at this shock, you’ll be well aware that FOX went completely back to the drawing board. So where should we begin…? Perhaps the first thing you’ll take notice of is just how massive it is. The new EVOL air sleeve has an absurd amount of air volume. So much that we ended up using 11 of the 12 possible volume reducers in our unit. That is partially due to the fact that we are riding a relatively linear bike in terms of its suspension rate but more on that later. The next thing you’ll notice are the adjusters on the reservoir. Independent compression and rebound adjustments are made to both the low and high speed circuits via 3mm and 6mm allen keys respectively. 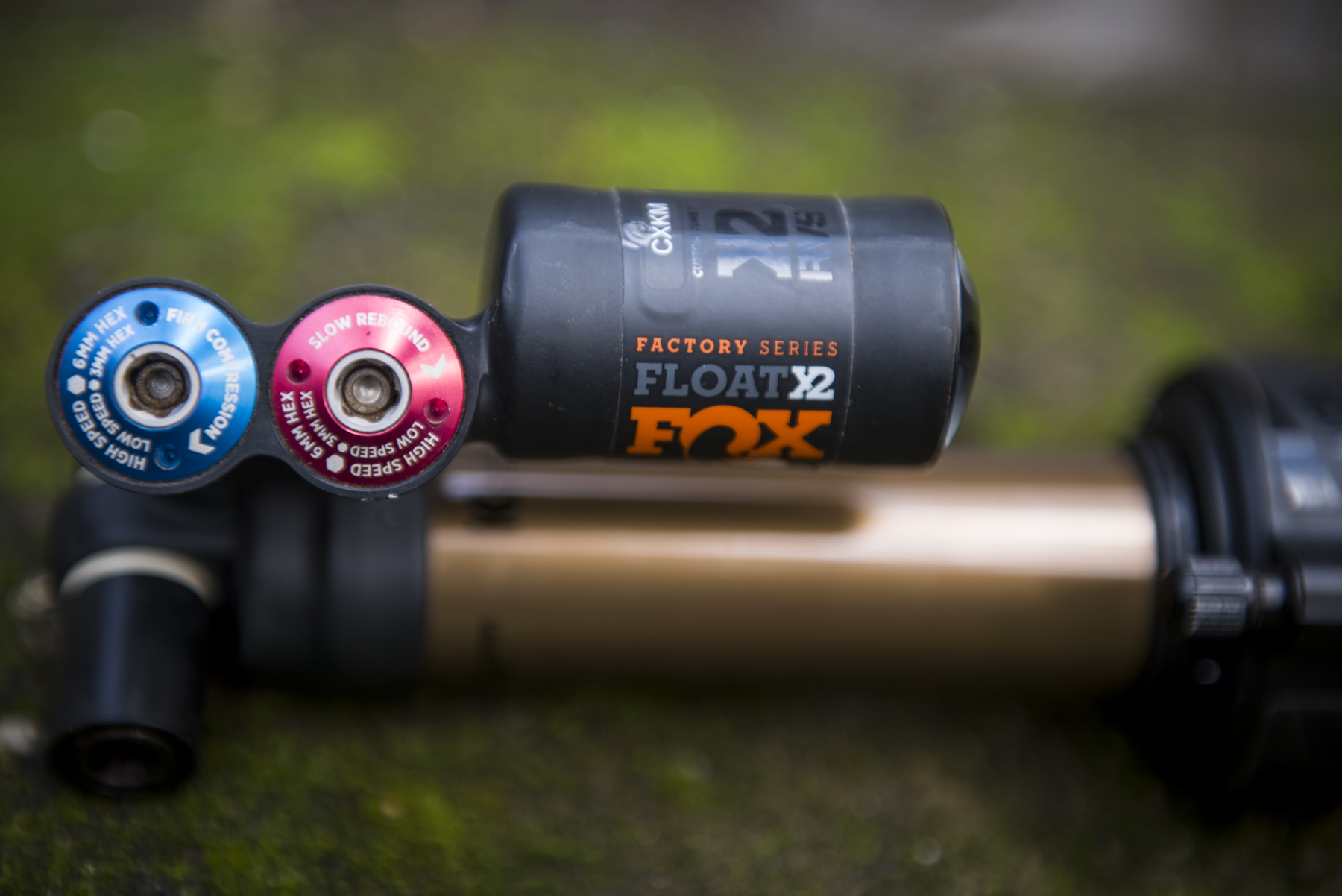 To shed a bit more light on FOX’s goals with the Float X2 and its coil sprung counterpart (the DHX2); it’s best to refer you to our interview with Bill Brown, FOX’s lead engineer. In summary, FOX decided to retire the RC4 and move to a twin tube style shock, or as they like to call it – a recirculating shock.

The video above is an excellent visual explanation of the Float X2/DHX2 internal operation .

FOX’s rationale behind this was to lower internal operating pressures, improve system response time and not simply reduce, but eliminate hysteresis. This all leads to more controlled damping and a lower likelihood of failure. On the spring side, it is worth mentioning that FOX offer the DHX 2 with a lightweight steel spring. No disrespect to the DHX2, but we were more excited about throwing a leg over the new air sprung shock, so here are the details.  A tool free air sleeve can be removed by a simple twist and a yank (after you deflate the air spring of course)… Depending on the shocks eye to eye length, it can accept up to 12 volume reducers in the form of the round black rings shown below. As you lower air volume by adding said reducers, you can manipulate your suspension’s progression. Basically, using more reducers results in a more progressive feel and provide a lighter, more supple initial stroke and firmer ending stroke with higher resistance to bottoming as well as more support in the middle of the travel. Utilizing less reducers with the same amount of sag will result in a more linear feel with firmer initial travel and action that is more susceptible to bottoming. 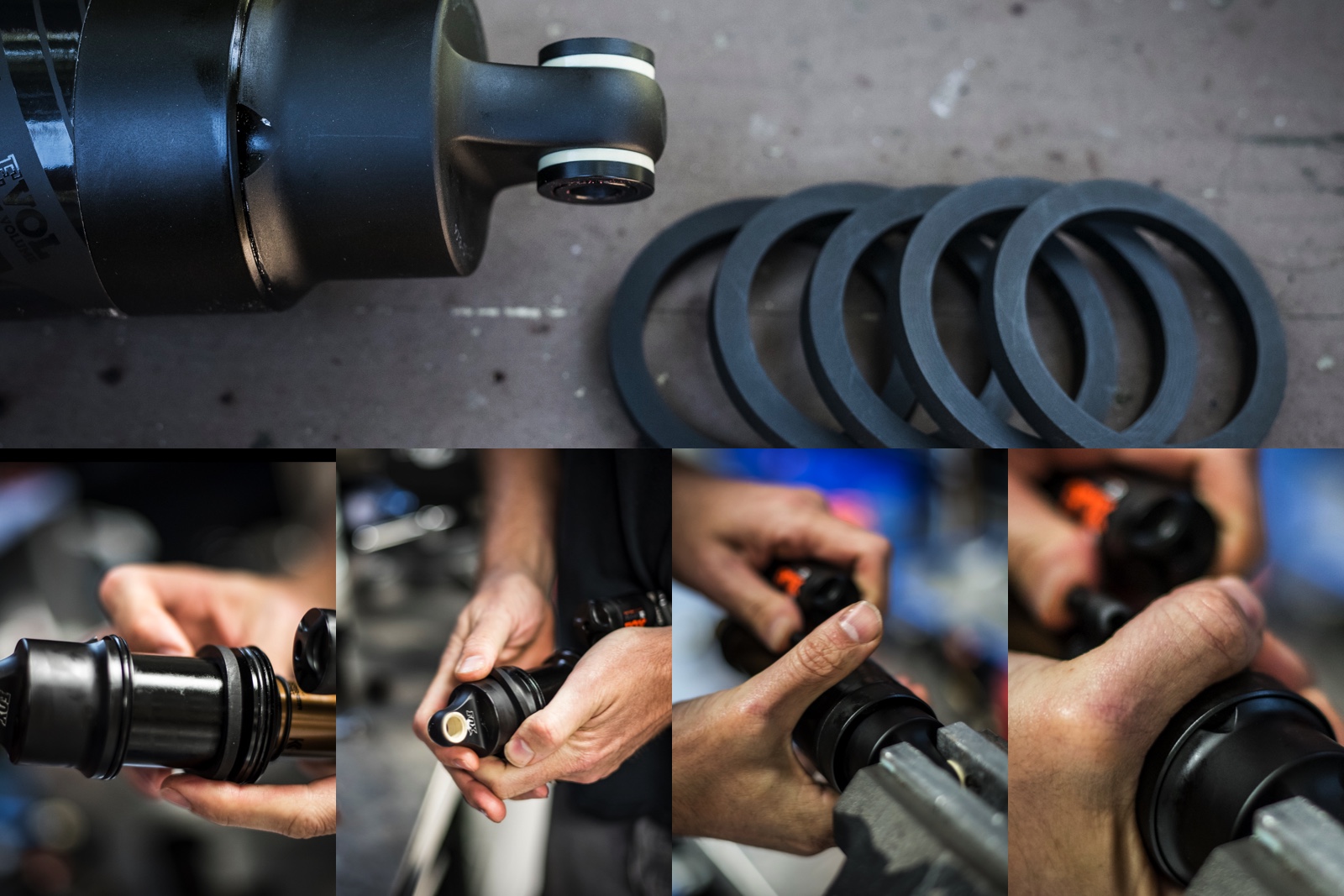 Anyhow, now that we’re done with the initial techy talk, let’s discuss how we set the Float X2 up for our gravity endeavors.

*all clicks from full closed

When we left FOX we had already started out with 8 reducers per their recommendation and truth be told, we were shocked that they suggest that we utilize so many as a baseline. This happened just before Crankworx. Whistler and after one quick lap in the park, our bike felt sluggish, wallowy and disconnected from the trail. Luck would have it that we got to chat with Brendan Fairclough and his mechanic Big Ben. Our test rider is the same weight as Brendog and although he’s nowhere near the skill level, he still pushes a DH bike relatively hard. Anyhow, we had Big Ben set our Float X2 up with the same settings as Brendan so we could feel the contrast between a consumer and pro setup. In short, it was magical and pretty much right where we wanted to be.  While it seems a bit wild that we needed to use 11 volume reducers in our shock, the EVOL can is HUGE and its relative size is amplified as the shock gets larger. Our Scott Gambler has a fairly linear suspension rate curve and features the longest standard eye to eye and shock stroke/length combination on the market…  So in reality it did make sense that we needed to use so many reducers. 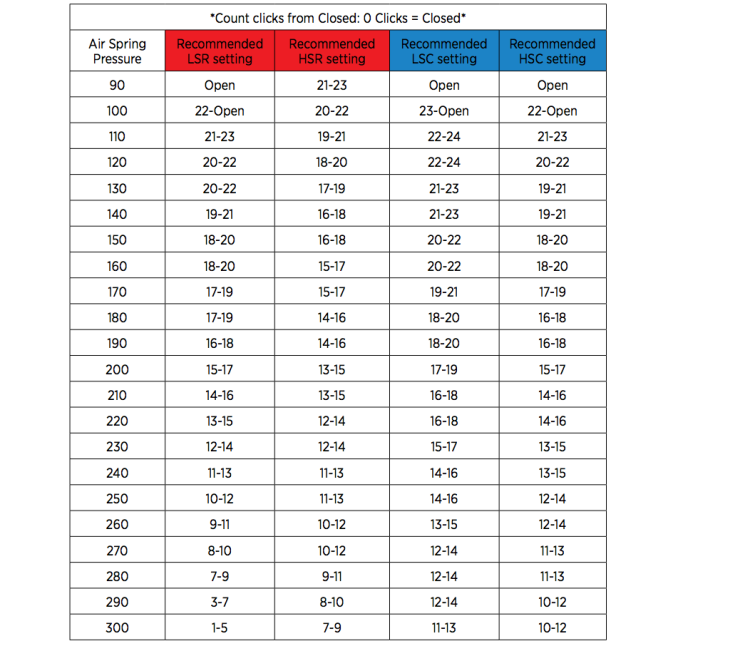 What makes the X2 shocks so unique is that they offer a large usable range of adjustment.  So much that a great deal of their pro racers are riding on the same tunes that consumers and mortals ride. With that in mind, they surely use vastly different settings. Given consideration for the broad range of adjustment, the Float X2 necessitates critical note taking,  open minded experimentation and  a very cerebral tuning process.  The recommended settings from FOX shown above are a great starting point, but if you’re a discerning rider, they’ll likely just be the beginning of your endeavor to find the perfect baseline.  In short, this isn’t the type of damper that you just chuck on your frame and ride away. 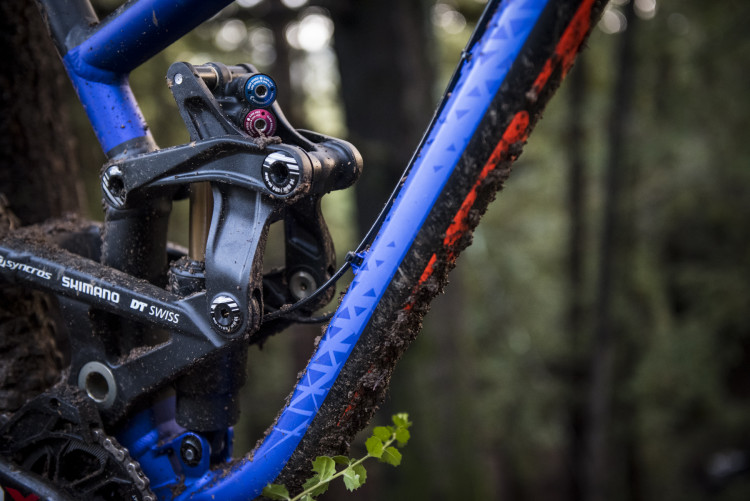 Lastly, it should also be mentioned that just because the X2 shocks offer such a broad range of adjustment, that doesn’t mean that they can’t be tuned differently by users who are willing to crack them open.  In fact, they are one of the easier shocks on the market to work on and set up a custom shim stack in.  The air cap at the end of the reservoir features a nifty hidden pin spanner which is used to remove the compression and rebound stacks.  There is more info on tuning the X2 shocks at home in the aforementioned Bill Brown interview.

So we’ve discussed tuning and tech long enough.  How did the Float X2 actually ride?  Is it the first air shock that matches a coil in terms of sensitivity? Well, not quite, but it certainly is the best air sprung rear shock that we’ve used for DH applications to date.  It truly is infinitely tunable in so many ways.  It’s incredibly sensitive, devoid of stiction and so consistent on long runs.  The range in progression that you can achieve from the air spring is broad; that’s one of the biggest general advantages that air springs have over coil springs. 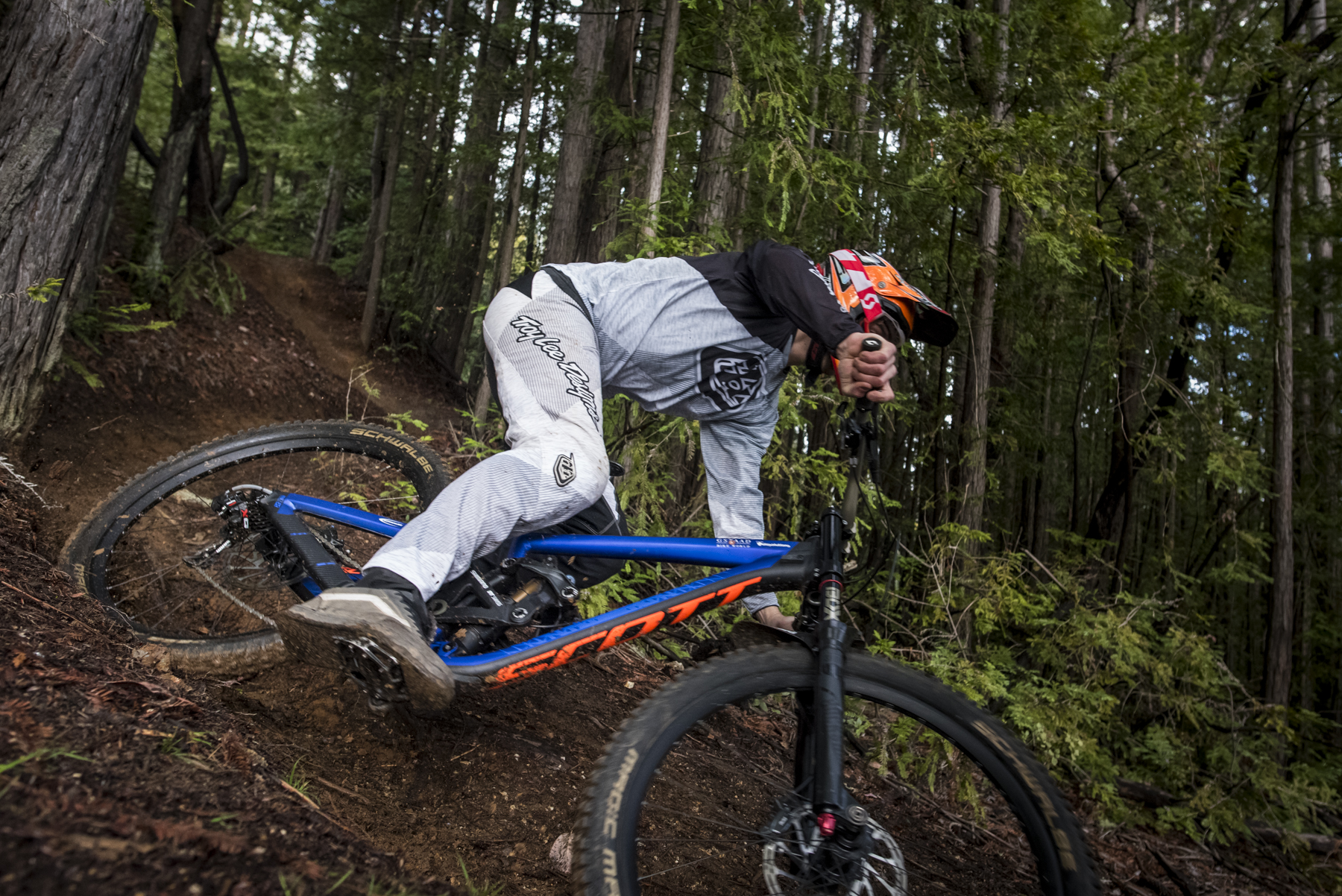 With the above praise in mind, we must say that there isn’t much progression built into the hydraulic/damping side of things.  Although that can have its benefits like lower operating pressures, it can be deemed a compromise in some ways.  It’s difficult to convey but think of it this way : if a rider could accomplish perfect progression, support and bottoming resistance from an air spring alone, there would be no reason to chase a higher level of perfection on the damping/hydraulic side.

Because the X2 platform recirculates fluid, displaces very little and runs at lower internal pressures it’s more consistent and runs cooler, but doesn’t build up as much bottoming resistance.  Therefore it relies on the spring side.  We do think there is a great deal of merit in damping systems where the hydraulics share greater responsibility for handling bottoming resistance.  This is not the case with the Float X2 as it relies more on heavily on manipulated spring curves to prevent bottoming; hence our setup necessitating 11 volume reducers.

This is why many of the World Cup racers on FOX who ride fairly linear bikes tend to use the Float X2 instead of the DHX2.  Some examples are Aaron Gwin and Brendan Fairclough.  The circuitry inside the Float X2 and DHX2 are basically identical, but the Float X2’s air spring can be set up to offer much more progression in the middle and end of the stroke. All in all, the Float X2 is the best air sprung rear shock that we’ve ever used; by a long shot.  It offers incredible consistency on long runs and the best traction we’ve ever felt from an air shock.  If you’re looking for the absolute pinnacle in traction and sensitivity, coil springs still win but this is as close as you can get with an air shock.  The Float X2 won the World Cup overall last year.  It is the first air shock in the history of DH mountain bike racing to do so.  Even though its captain was an incredible athlete, that still serves as a testament to what an incredible product it is. We love that this shock is available in eye to eye lengths for mid travel & enduro bikes, but we’ll wait until it features a lockout switch before we jump onboard it for non chairlift assisted applications.  The weight savings and range of adjustment to the spring curve make this very attractive to the enthusiast who rides a good mix of trails as well as the occasional bike park lap.  However, we definitely think this shock requires a rider with patience and an attention span as it isn’t difficult to get unknowingly lost in the tuning.  That’s not to say it’s hard to tune; it just means you have to take notes and be very aware of your bike as you set it up.  In the grand scheme of things, if there was ever a shock that would woo a die hard coil fan over to the air side, the Float X2 would be that shock.