A while back, around Sea Otter time last year, we headed to Santa Barbara, California for a first ride on Schwalbe’s updated tire (compound) range. While the brand didn’t launch any new tread patterns, they simplified their line and introduced a completely re-vamped strata of compounds dubbed “Addix”.  The focus with these new compounds was mainly centered around increasing durability, while still continuing to improve performance. Since we’d ridden prior versions of most of the tread patterns whose knobs received an update, this made for a nice opportunity to see how the changes worked out in the real world… 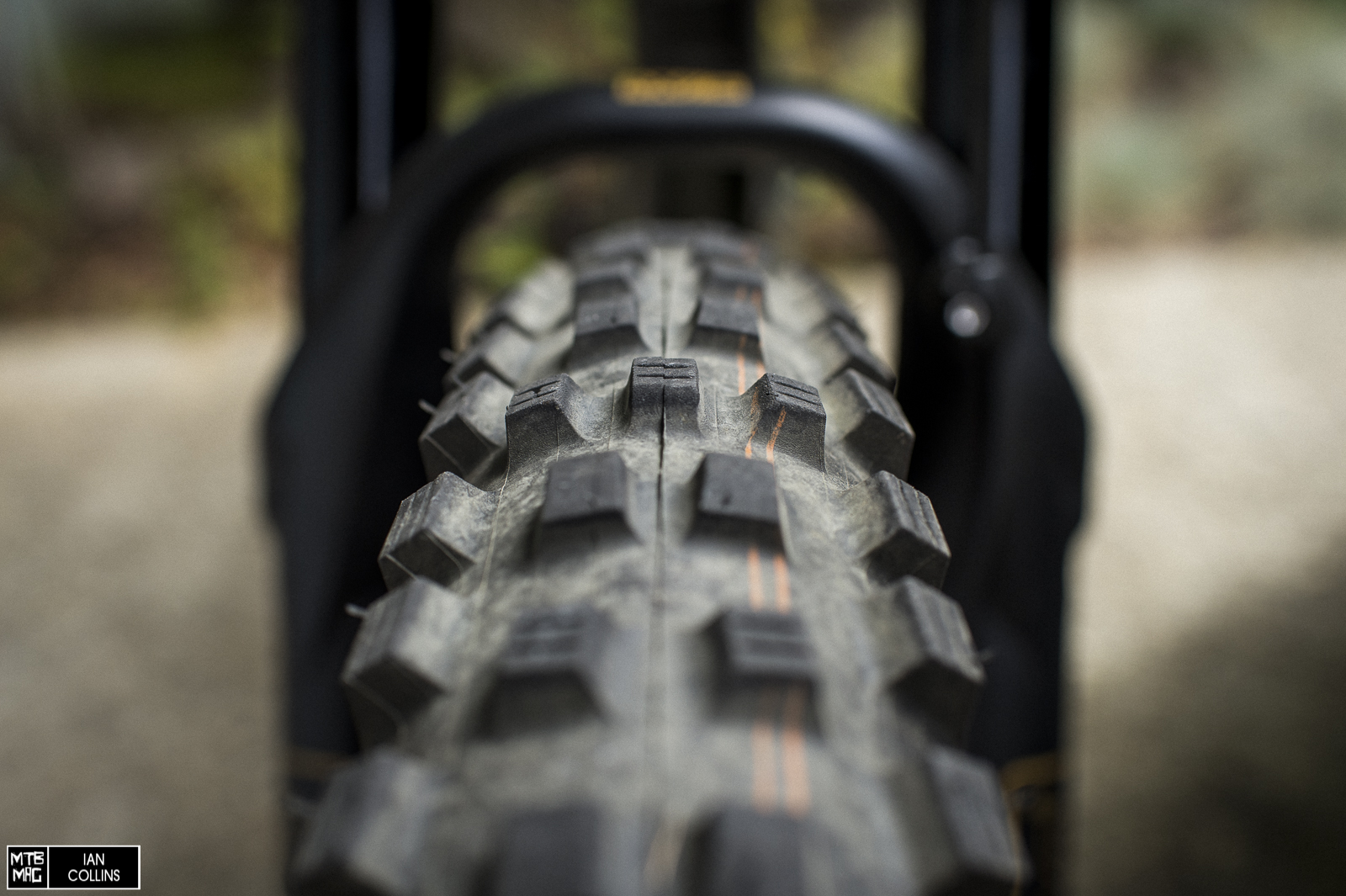 As a brief rundown, from hardest to softest, there are four compounds: Speed, Speedgrip, Soft and Ultrasoft. The new nomenclature is a bit less nebulous and more self explanatory than the prior designations such as Trailstar, Vertstar, etc. With that in mind, it is worth pointing out that the casings haven’t changed. 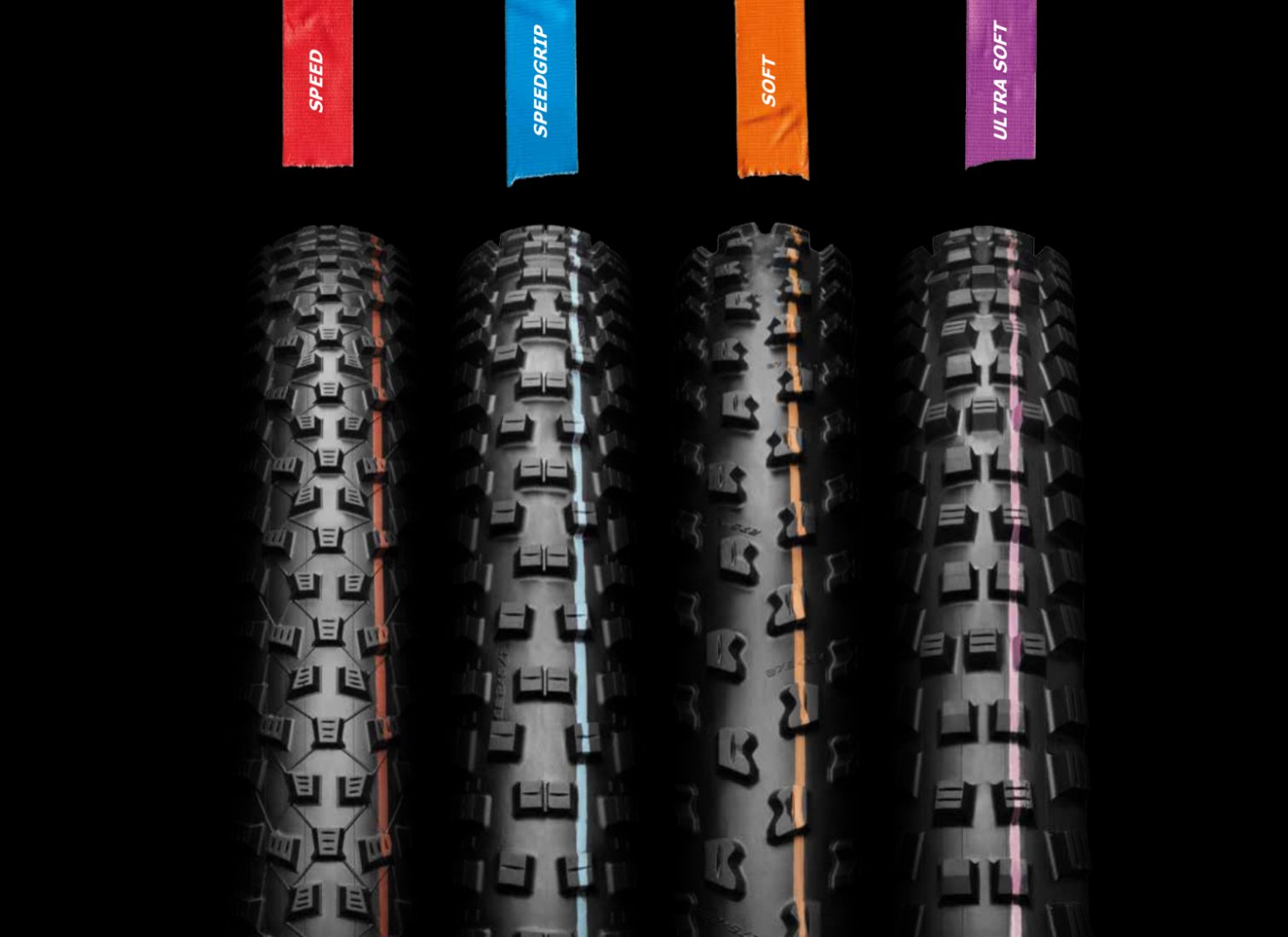 In short, prior to Addix, Schwalbe had a small bout of tires that suffered from some issues such as knobs that were prone to tearing and premature wear in general. In an effort to correct things, Schwalbe made a massive investment in a new, 3-story tall, $1.5 million rubber compound mixing machine.

Coming full circle, after receiving a package consisting of various tread pattern/compound/casing combos, we’ve been testing the following tires over the last 10 months or so:

Admittedly, we didn’t exactly feel an immediate difference in performance straight away…After all, this revamp was largely about durability in the first place.  Regardless, we have quite a few takeaway points on the line, as a whole, from a pulled back perspective. We spent the most saddle time on a “Soft” Magic Mary (Fr.) / “Speedgrip” Nobby Nic (Rr.) combo that we mounted to two separate bikes. Side note: the Nobby Nic only comes in the “Speedgrip” compound. The “Soft” compound proved to be absolutely perfect in terms of striking the ideal balance between traction, support, rolling resistance and durability. For how soft the compound felt, it absolutely exceeded our expectations in the latter 3 aforementioned categories, by a long shot. As for the “Speedgrip” compound, we feel that this made the most sense as a rear tire, or for a mixed condition tire for riders on a budget, who truly value durability. It offered surprisingly good grip for how well it wore, although riders really pushing their limits and looking for 10/10 traction would be inclined to go softer. We’d have to say that if there was one area where it might fall behind slightly, it would be as a front tire on really firm hardpack. The above photo is included as a testament for the overall improvement on the Nobby Nic. In prior experience, the only Schwalbe tire that we happened to have an issue with in the past was the Nobby Nic. You can see some very mild degradation of the center knobs from braking on steep terrain, but the side knobs are holding up exceptionally well. Also, consider the fact that this particular tire has quite a bit of miles on it. 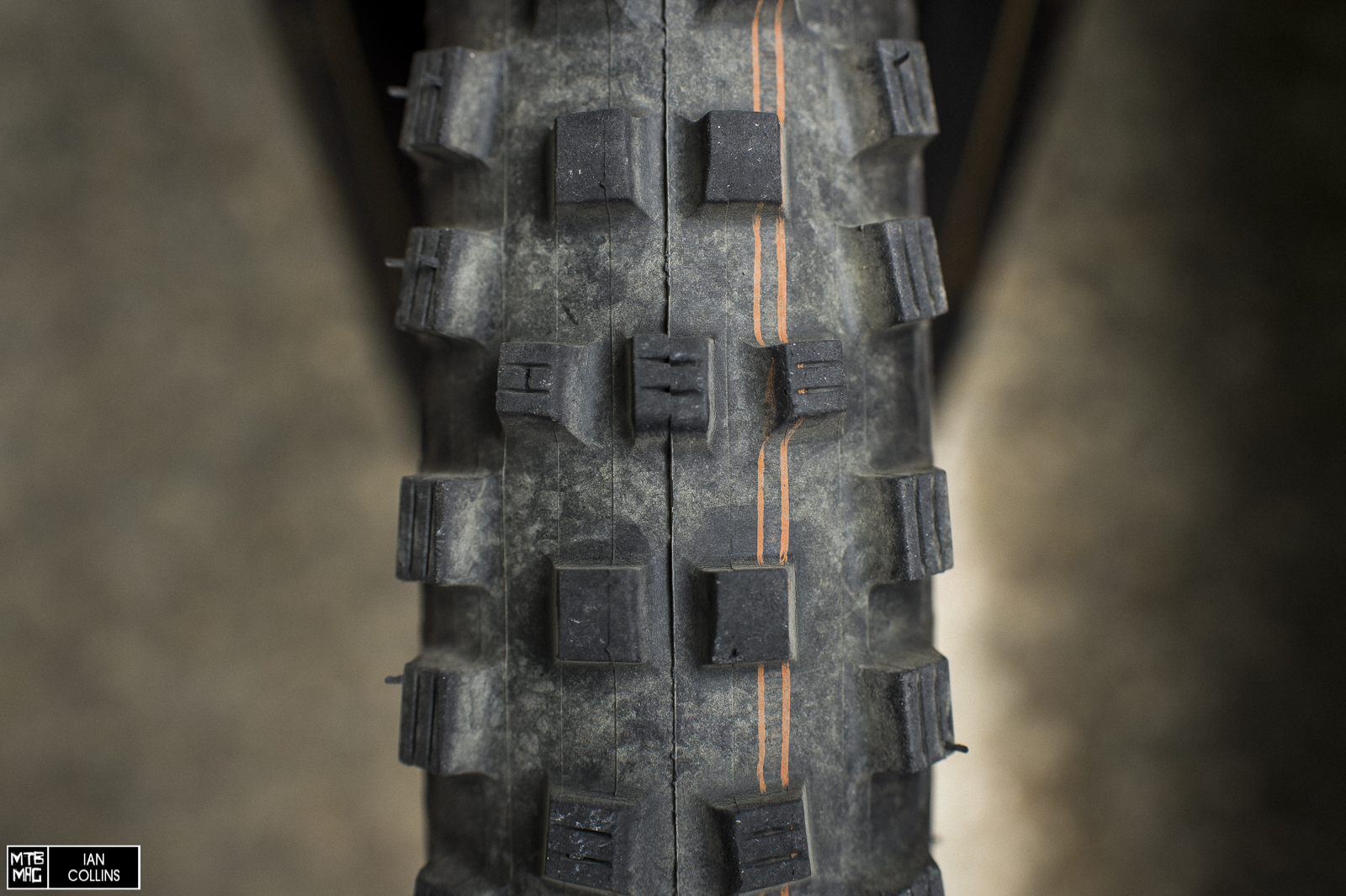 It’s no secret that front tires don’t wear as quickly, but the wear on the “Soft” Magic Mary tires has been exceptionally good, given the tires’ exceptional traction. The test rider piloting the tire above tends to push his left turns a bit harder than his right turns and if you look closely, you can see the faintest bit of extra wear on that side. All things considered, after quite a bit of riding, the knobs are hanging tough, especially given that it’s the “Soft” compound. 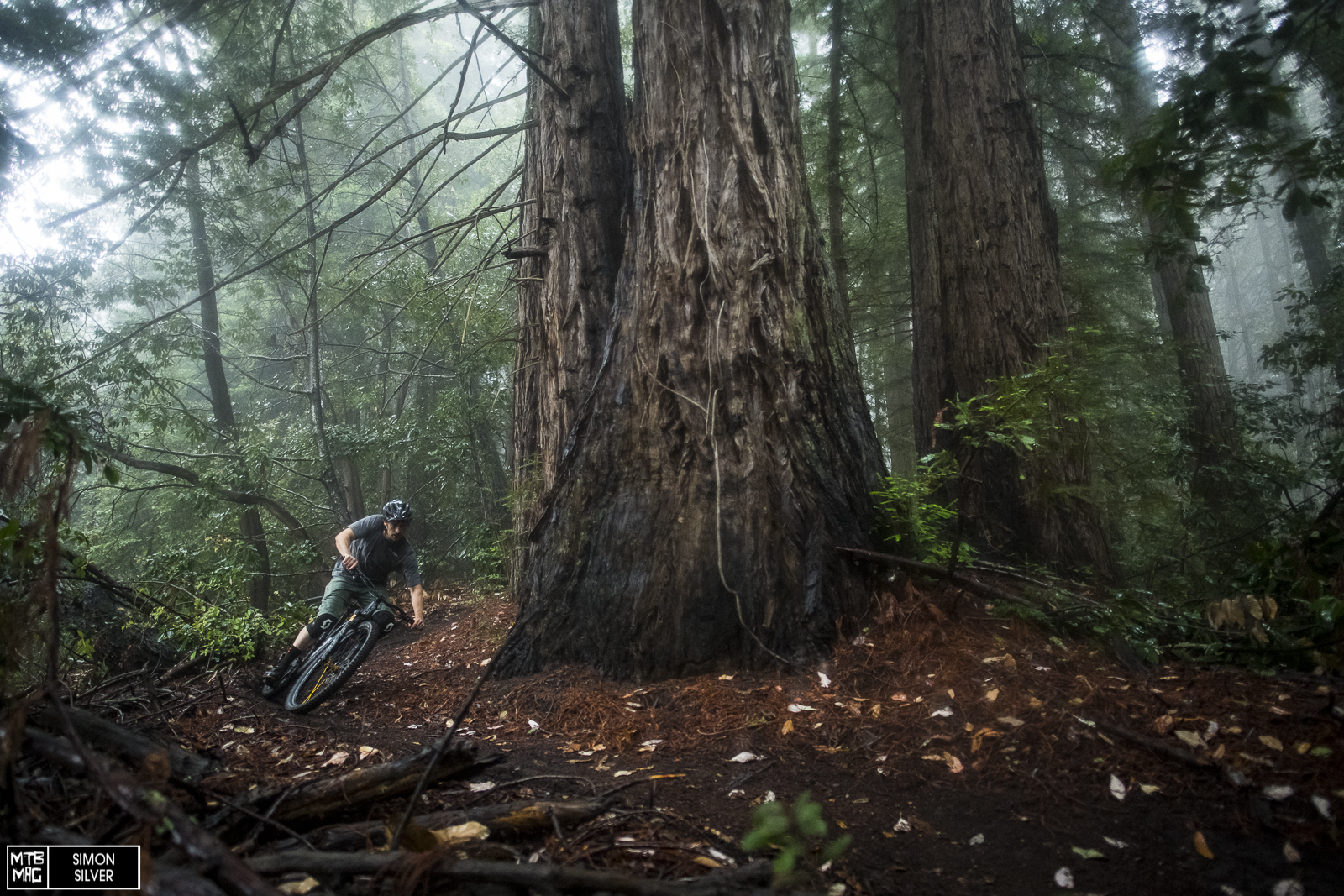 For riding that’s less “day-to-day”, we mounted up our Dirty Dan tires in the “Ultra Soft” compound for the nastiest of winter days on both our Enduro and DH bikes. We initially had some concerns that the these tires would push through and fold in the corners a bit, given how soft the compound felt to the touch. That presumption was put to rest in the first few corners…The Dirty Dan is a mud spike and it’s very much condition specific, but our focus, in the context of this review, is on the compound. It was the only tire that we tested in the “Ultra Soft” compound at both the front and rear. Although, as expected, the rolling resistance was quite slow, the traction was above and beyond anything that we’ve ever ridden, but we had no issue with degrading knobs.  Curious about how supportive the “Ultra Soft” compound would be in less than horrendous conditions, our tester mounted a Magic Mary to his DH bike up front and rode it in fairly standard, DH conditions. Assuming that it might be a bit unsupportive in the hardpack turns due to how soft the rubber was, he was taken aback at how hard the soft tire could be pushed, particularly in rough, beat up turns.

In the grand scheme of things, we’ve had a very good experience with the new Addix compounds. Admittedly, we didn’t test out the hardest compounds or any of the XC offerings, but those didn’t have any issues in the first place. We were pleasantly surprised by the increased grip on offer from the harder compounds, and equally impressed, if not more so, by the fact that the softer compounds had massively improved support and durability. 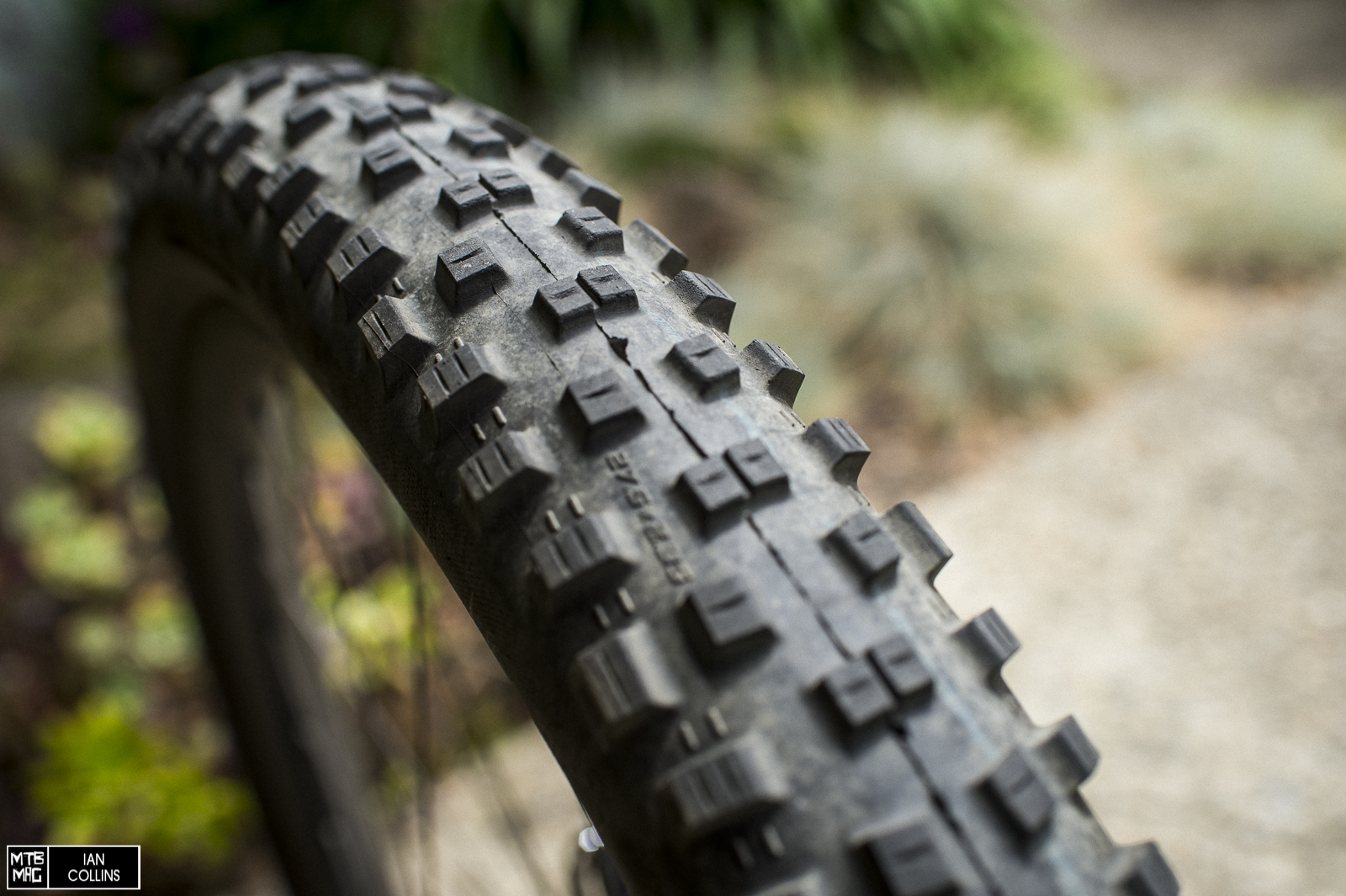 In short, if you’ve had any past issues with premature wear on Schwalbe tires, or are just mulling over the idea of revisiting them for any reason, we feel highly confident in reporting that their (monumental) investment in new compounds has proven to be a big success. From every day trail riding to proper downhilling in the gnarliest of conditions, we can’t think of a single shortcoming in this lineup. The compounds and casings are stratified logically and well designated to their intended usage and tread pattern. Frankly, it’s hard to find fault in anything that Schwalbe is doing at the moment. Hats off!