Quite a few months back, when there was an actual World Cup DH season going on, some of the keen eyed among us noticed Amaury Pierron and a few others on the circuit riding aboard a new tread pattern from Schwalbe – often piloting said tires to great success. At long last it turned out that Pierron was actually riding the Eddy Current, a tire specifically designed for e-bikes. After months of fielding dozens of “those look like moto tires” comments out on the trails and after riding them on my e-bike, DH bike and Enduro, here is how they’ve been working out. 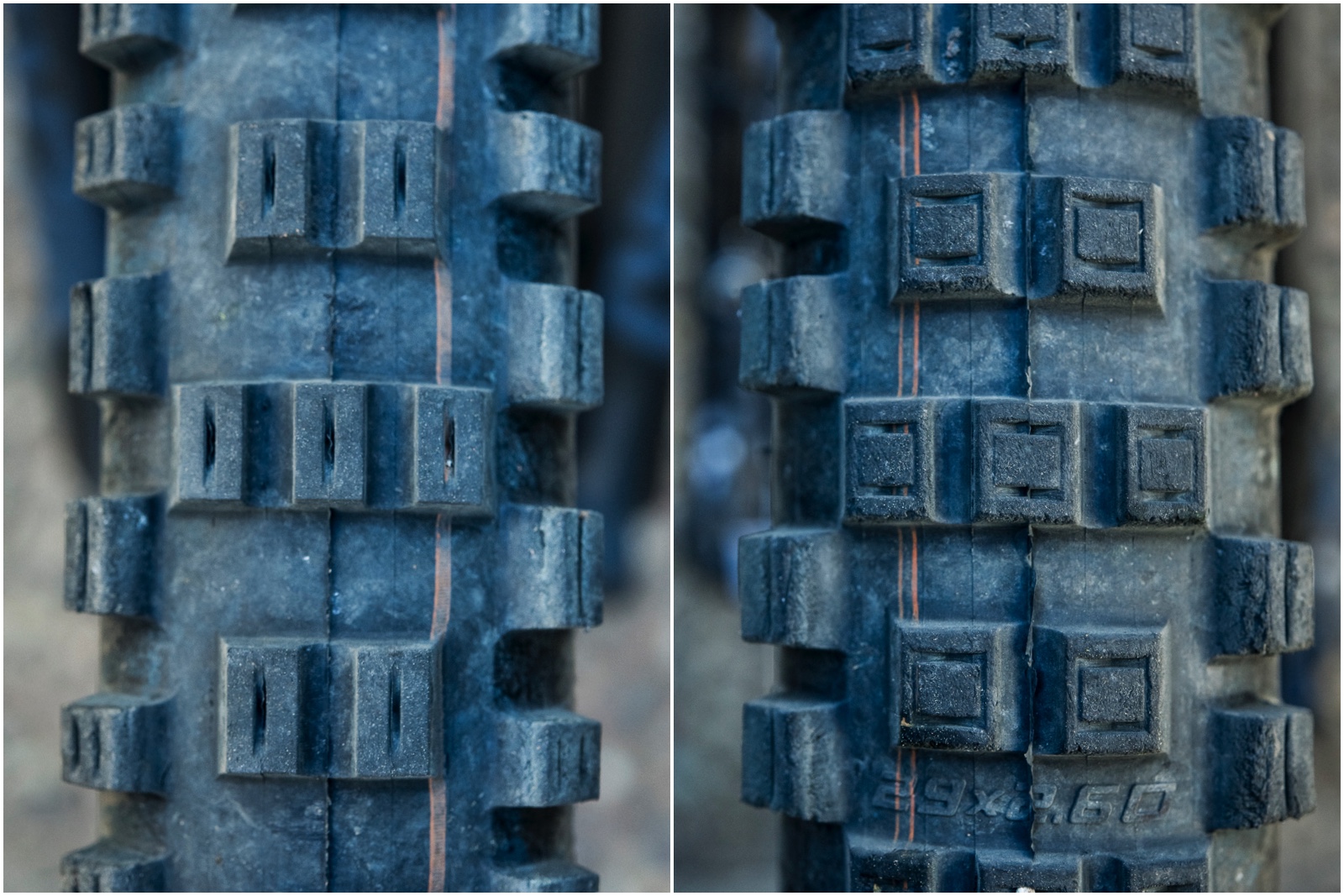 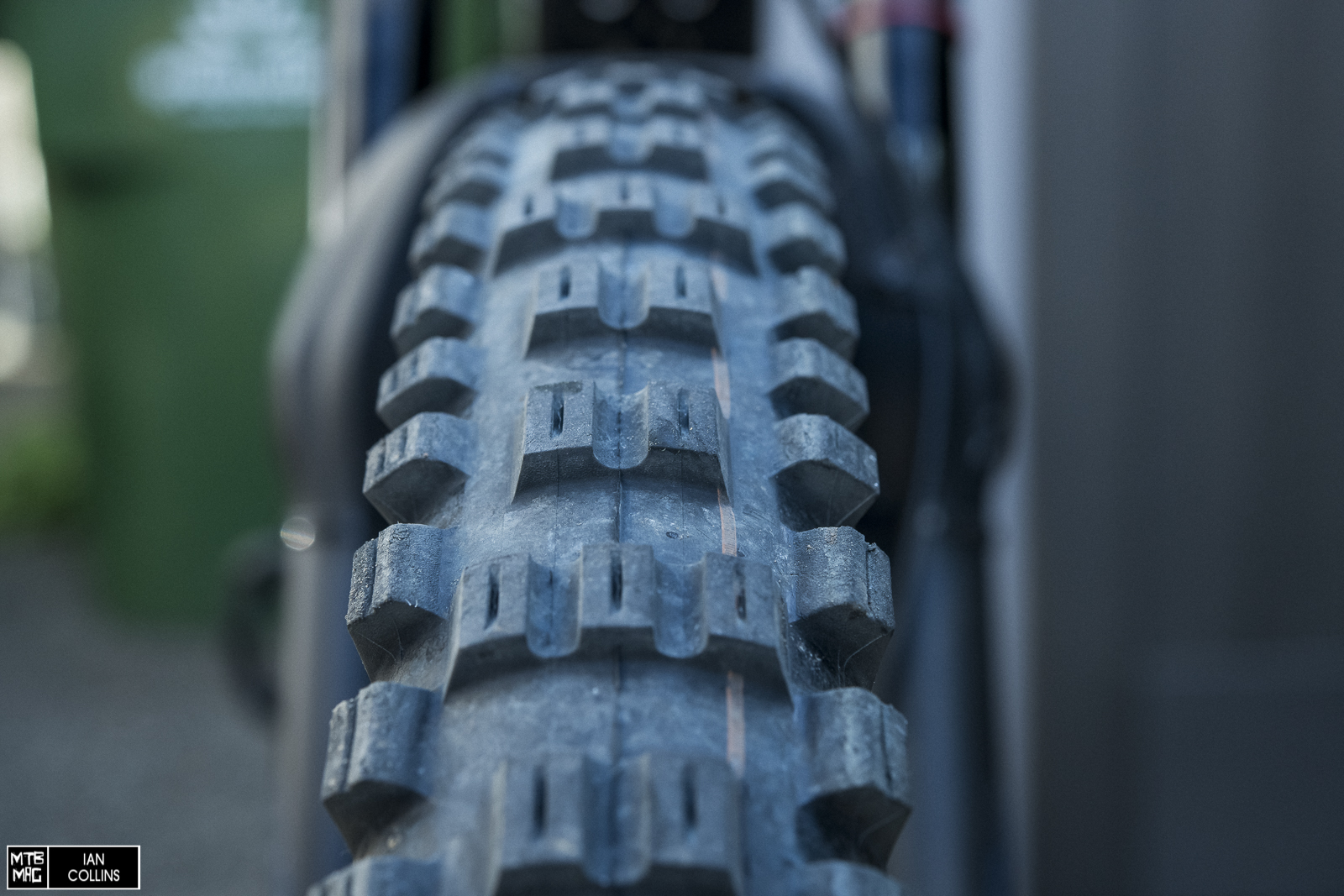 If this tire looks familiar, you aren’t crazy. The front tire’s tread pattern does bear some similarities to the Maxxis Minion DHF, but mainly just in the fact that the central knobs are rectangular and running the long way down the tread. Unlike the Minion, every two pairs of knobs are broken up by a row of three knobs. 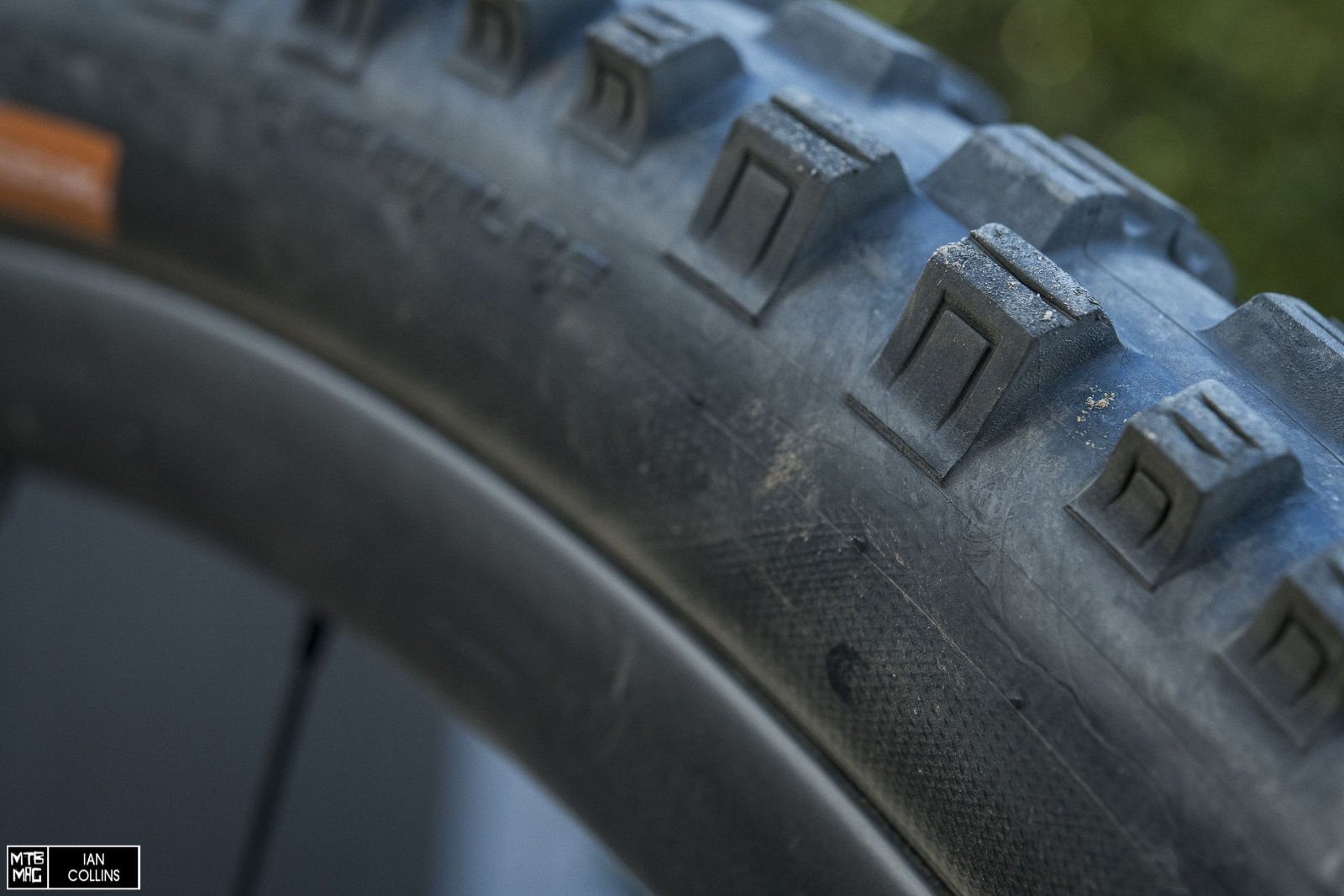 The side knobs on both front and rear have siping that mirrors the shape of the knob itself. This allows for some squirm, but not too much, making it a versatile all arounder with big cornering support. 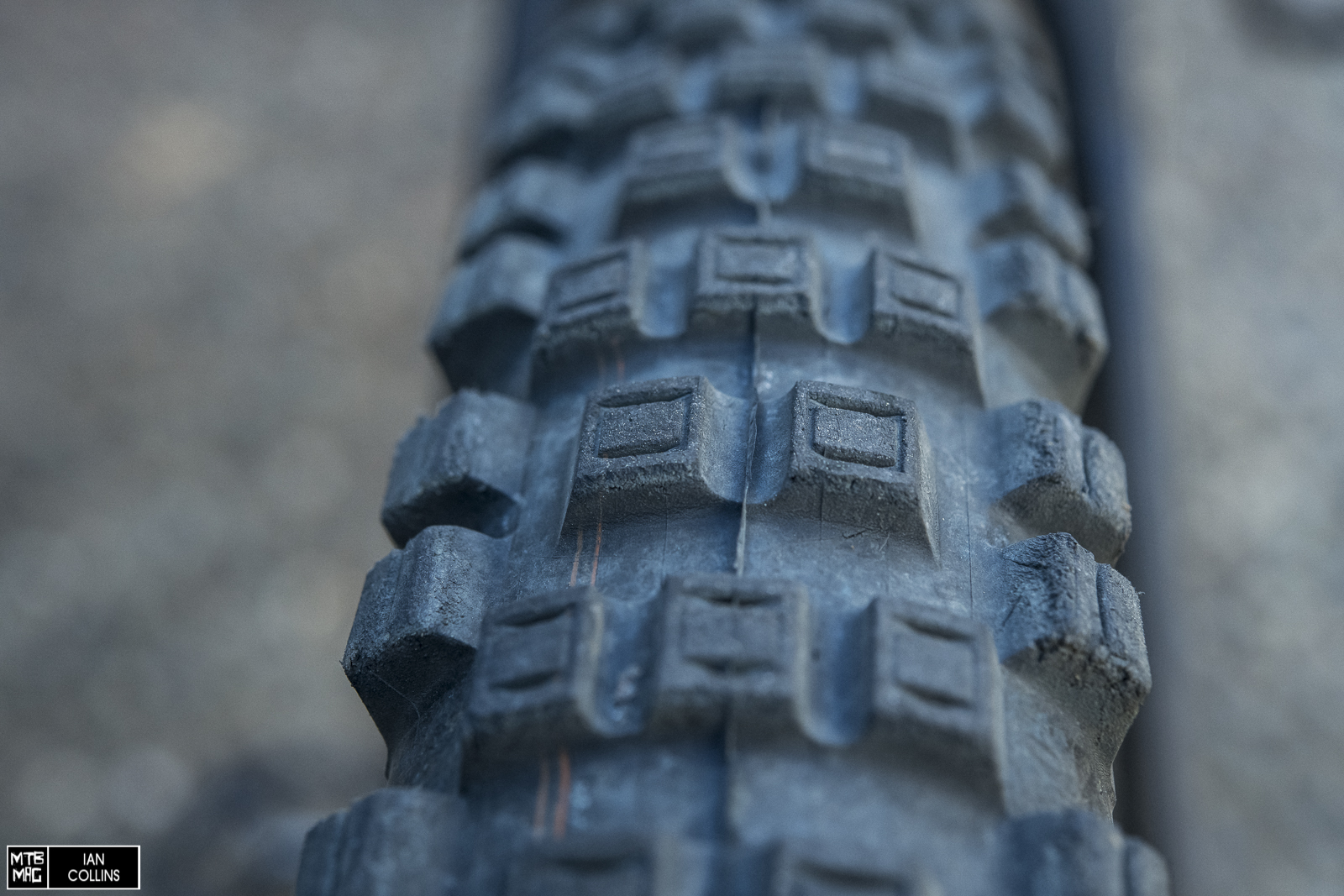 The rear tire takes on a pattern that sees a row of three knobs alternating with rows of two knobs. Their shape is square, rather than rectangular, like the front tire. 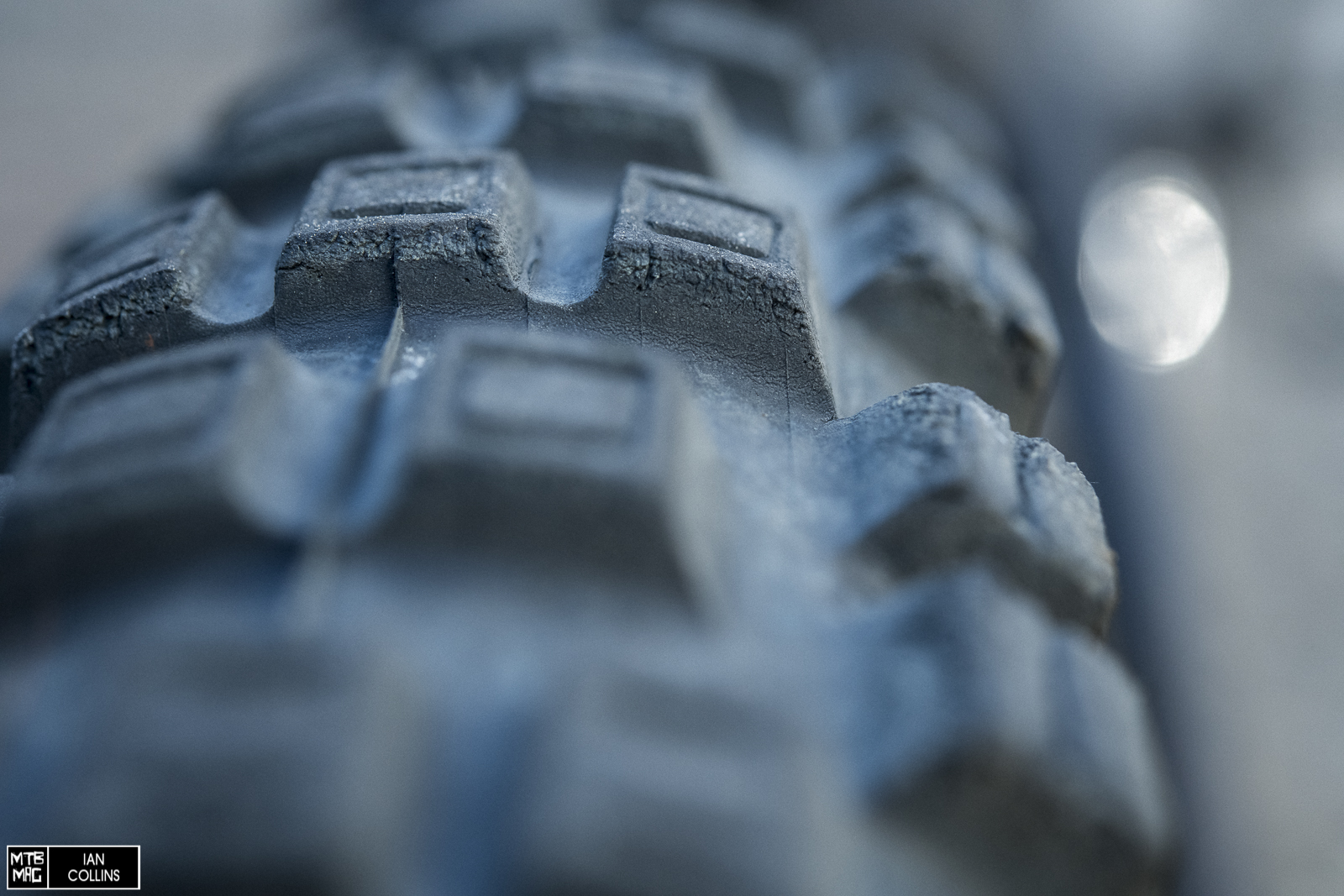 The central knobs rows of three line up with rather roomy gaps in the paired side knobs.

I started out riding the Eddy Currents as they were intended to be used – on an e-bike. Mounted to my Trek Rail, they replaced a set of stock Bontrager tires that were a bit measly for the job. Although I could feel the extra weight right away, it was difficult to gauge how efficiently they rolled. Upon mounting them on a regular (read: fully human powered) bike, it became apparent pretty quickly that the rolling resistance is quite good – better than Schwalbe’s classic Magic Mary anyway. At the moment these tires are just offered in Schwalbe’s heavy duty “Super Gravity” casing, which is typically aimed at heavy duty Enduro and DH riding. Given their currently rising popularity, it wouldn’t be surprising if Schwalbe began to offer them in the lighter duty “Evolution” casing, which would drop them from a ballpark vicinity of 1,400 grams to roughly 1,100 grams. With all of that as a pretext, I found them to be very suitable on the DH bike, and despite rolling along rather quickly their weight might be a bit much for longer human powered outings in the saddle – although, I’d imagine serious EWS racers would absolutely be racing on them this year if not for Covid-19 mucking things up. 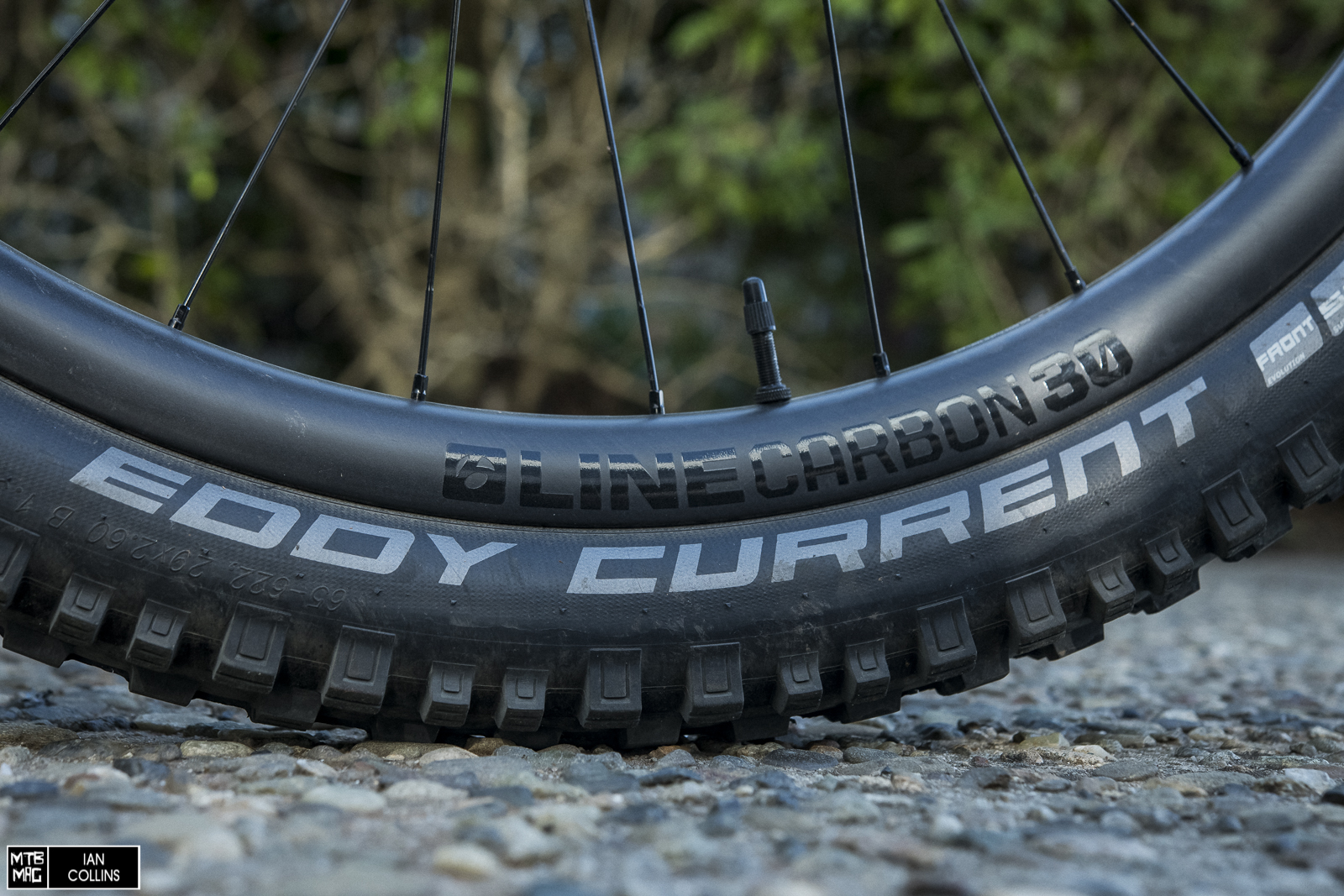 With all of the talk about weight and duty out of the way, now we can bring the actual on trail performance into focus a bit better. Personally, I’ve long hailed the Magic Mary as being a barrier breaker as it works in both loose and hard packed conditions incredibly well – something very few tires can manage. I found the Eddy Currents to be similar, but they tended to shine a bit more in hardpack and firmer/rockier terrain while not having quite as much all out cutting power and bite in the loose, like the Magic Mary. This is largerly due to the lower, less spikey knobs. Rather they just held on incredibly tightly on firm and loose over firm terrain, which could make them the perfect bike park tire by the way. Interestingly they vaguely reminded me of a Maxxis Minion DHF, but with added bite and better edge control due to their sharper, less rounded knobs. Fans of Minions who are looking for a bit more traction will find it with the Eddy.

While I found the rear tire to be an overall great performer, its knobs are slightly crowded and had more of a tendency to pack up in muddy conditions compared to the front tire. This was less of an issue on the e-bike as you could get up to speed and clear the tires more often. Anyhow, for what it’s worth, I dabbled with running a 2.4″ width version of the front tire out back and actually found that to be my preferred combination. As far as the compound is concerned, at the moment Schwalbe only offers the Eddy Current in their “Soft” Addix compound, which is the best all around option if you could only have just one. Having ridden the “Ultra Soft” and “Speed Grip” compounds that straddle the standard Addix Soft these are comprised of, I would pick this compound for 95% of the riding I do. More specifically, the mid duty compound strikes the perfect balance of performance and durability, which at their price is worth considering. Lastly, while they are fairly soft and grabby, I love that the rubber has a slow, damped feeling to it, which prevents it from feeling pingy or nervous on trail.

It’s nice to see a new high performance tire from Schwalbe going into the mix. The Magic Mary is a classic – quite possibly my all time favorite tire. The Eddy Current seems to find a niche that makes it a bit more suitable for DH and bike park riding as it leans in the direction of firmer terrain. At $103 each, they aren’t cheap, but they ward off flats nicely and wear rather well for how grabby their rubber is. For my money, I’d skip the rear specific tire out back and opt for another front one on anything but firm, dry terrain while mounted to an e-bike. At the moment, these are a great option for a DH bike as well, especially in the bike park. If you’re considering them on a bike that you’ll be doing big climbs on just keep the weight in mind, but all in all, the Eddy Current is a damn good tire.