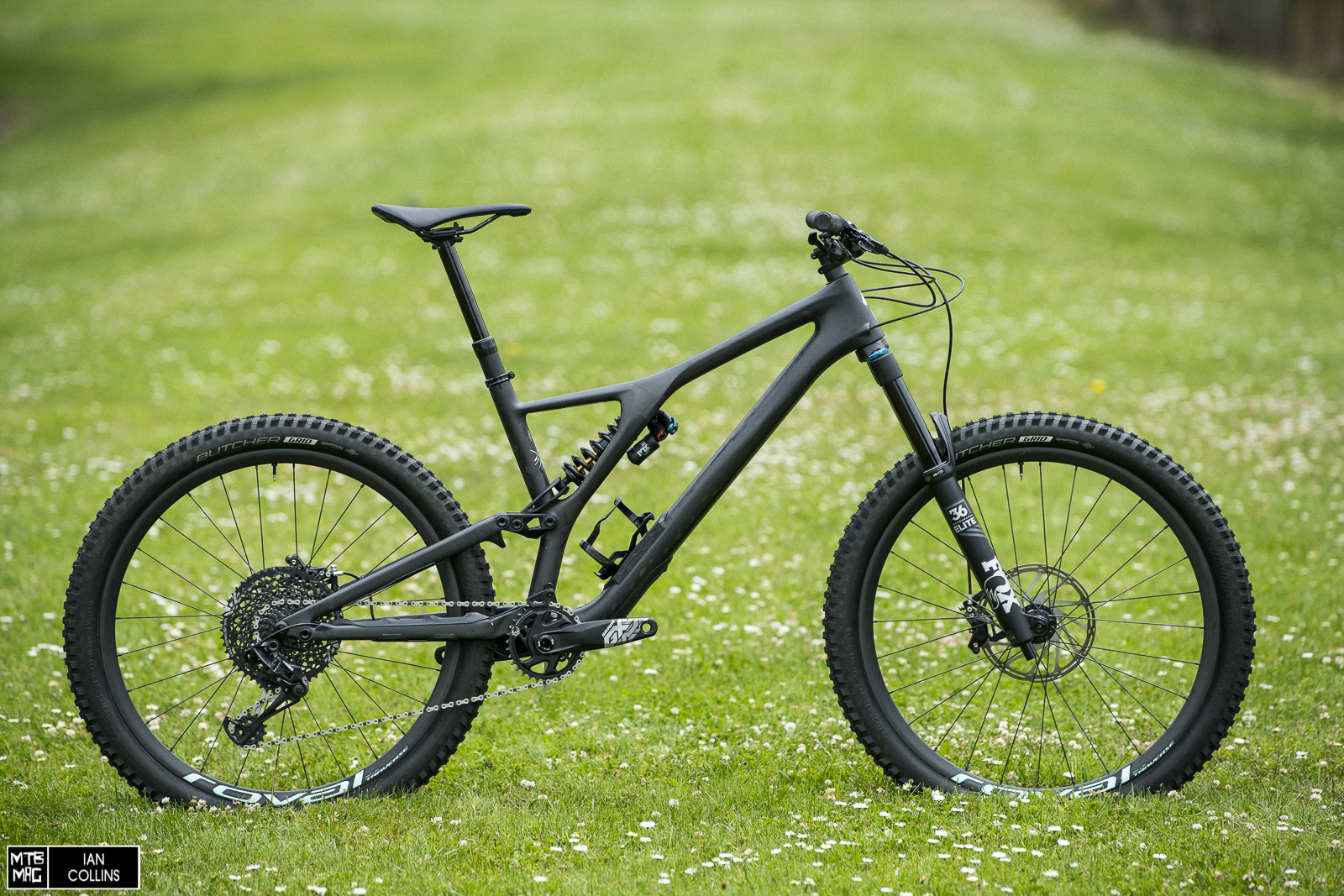 A few months back we published a head-to-head comparison of the Specialized Stumpjumper (classic) and Stumpjumper ST (short travel). Back then, the Californian brand had released their long, low, and slack Stumpy EVO in an aluminum version, but we knew a carbon fiber iteration was brewing and couldn’t wait to try one. For the last few weeks, we’ve been ripping around some of the steeper local trails to see how it fared… 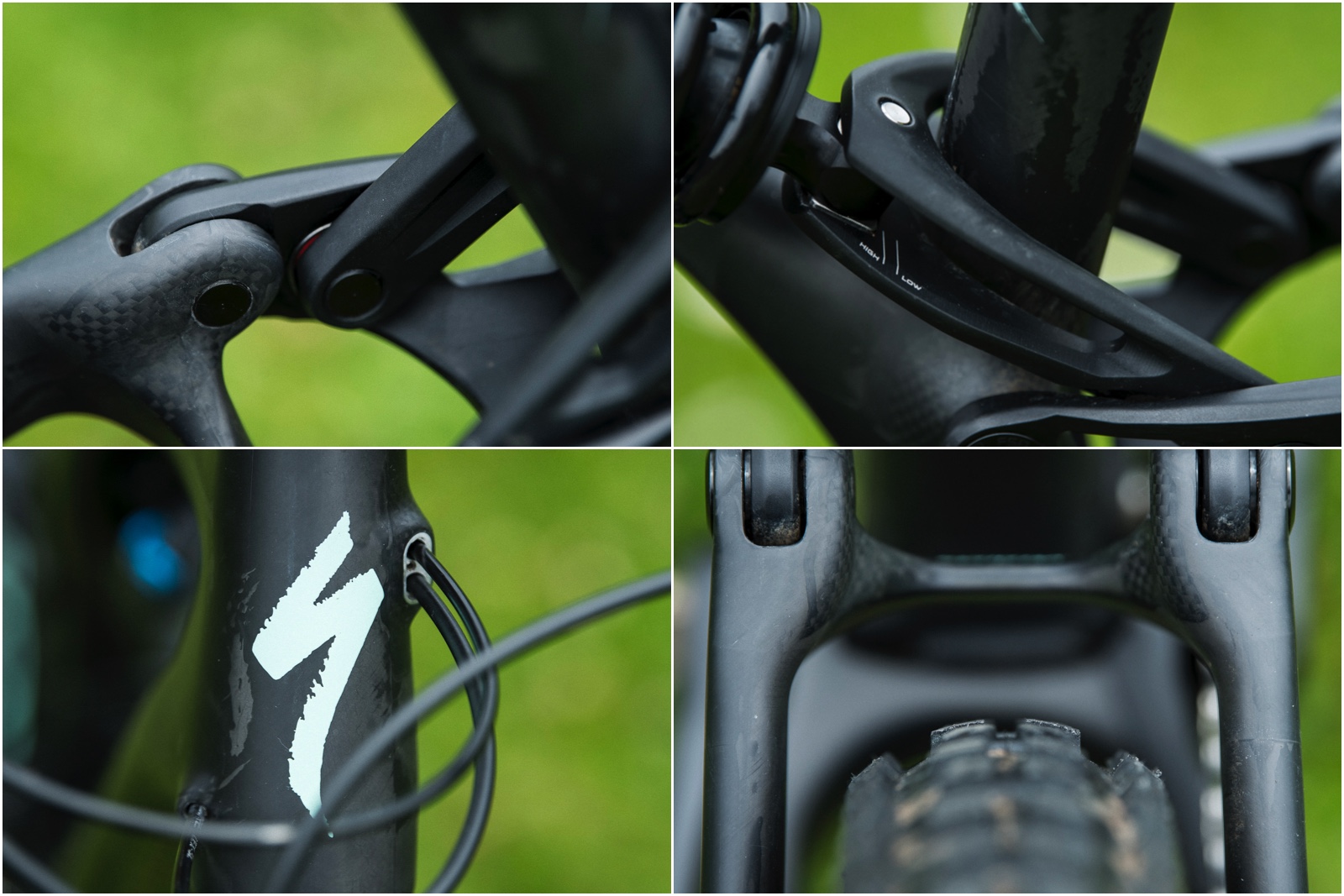 Most of the above details are not much different from the standard Stumpjumper. Clockwise, from top left: a fairly standard FSR linkage runs on full cartridge bearings. The new shock yoke uses no proprietary hardware and has an easier to use flip chip for high/low and steep/slack adjustments. The tire clearance on Stumpy is abundant, pictured are 2.6″ tires with loads of room. Lastly – sleeved internal cable and hose routings make life easier and look sleek. 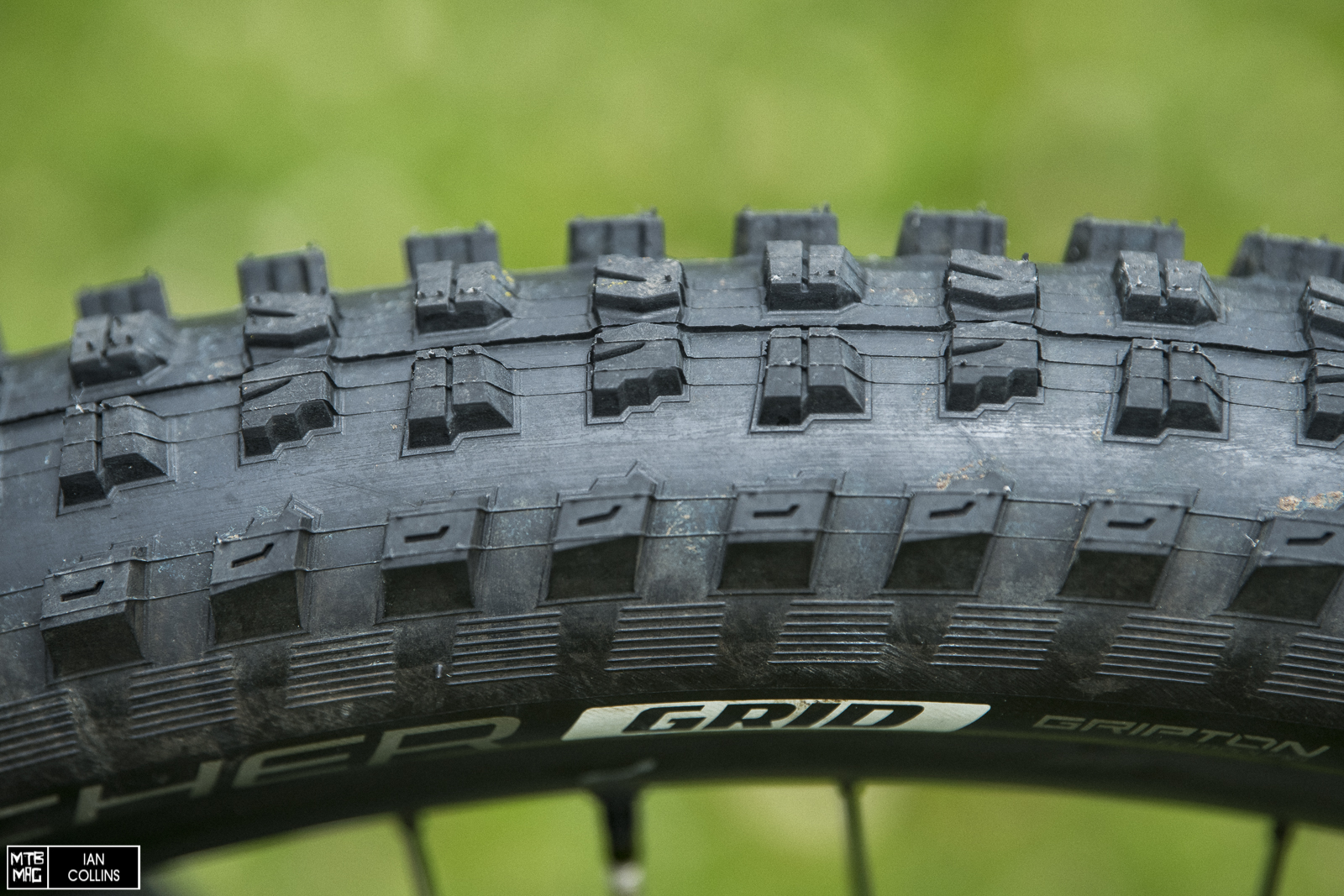 Speaking of tires, the EVO features house brand Butcher tires in a 2.6″ width with a Grid casing. I love the tread pattern and improved compound, but wish the casing was just a touch thicker for more flat resistance and better support in the corners. 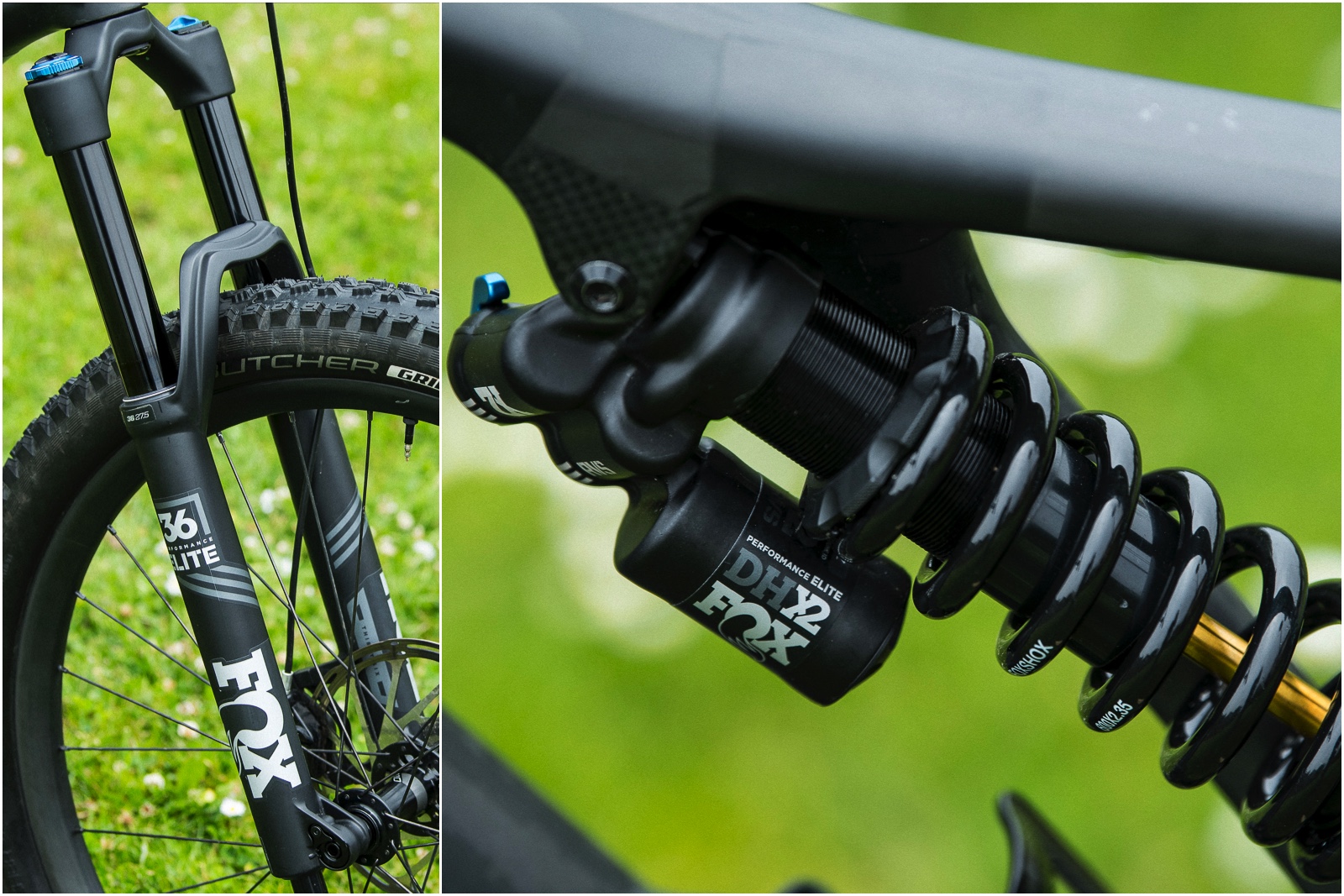 Heavy duty equipment front and rear. The FOX 36 Elite with the Grip 2 damper needs no introduction. Its action, adjustability, chassis stiffness and quality of damping are as good as it gets. On the right, Specialized opted to go with a DHX2, Fox’s coil sprung rear shock. Its damping is adjustable externally with tools, but it also features an easily accessible lockout lever to improve efficiency on the climbs. 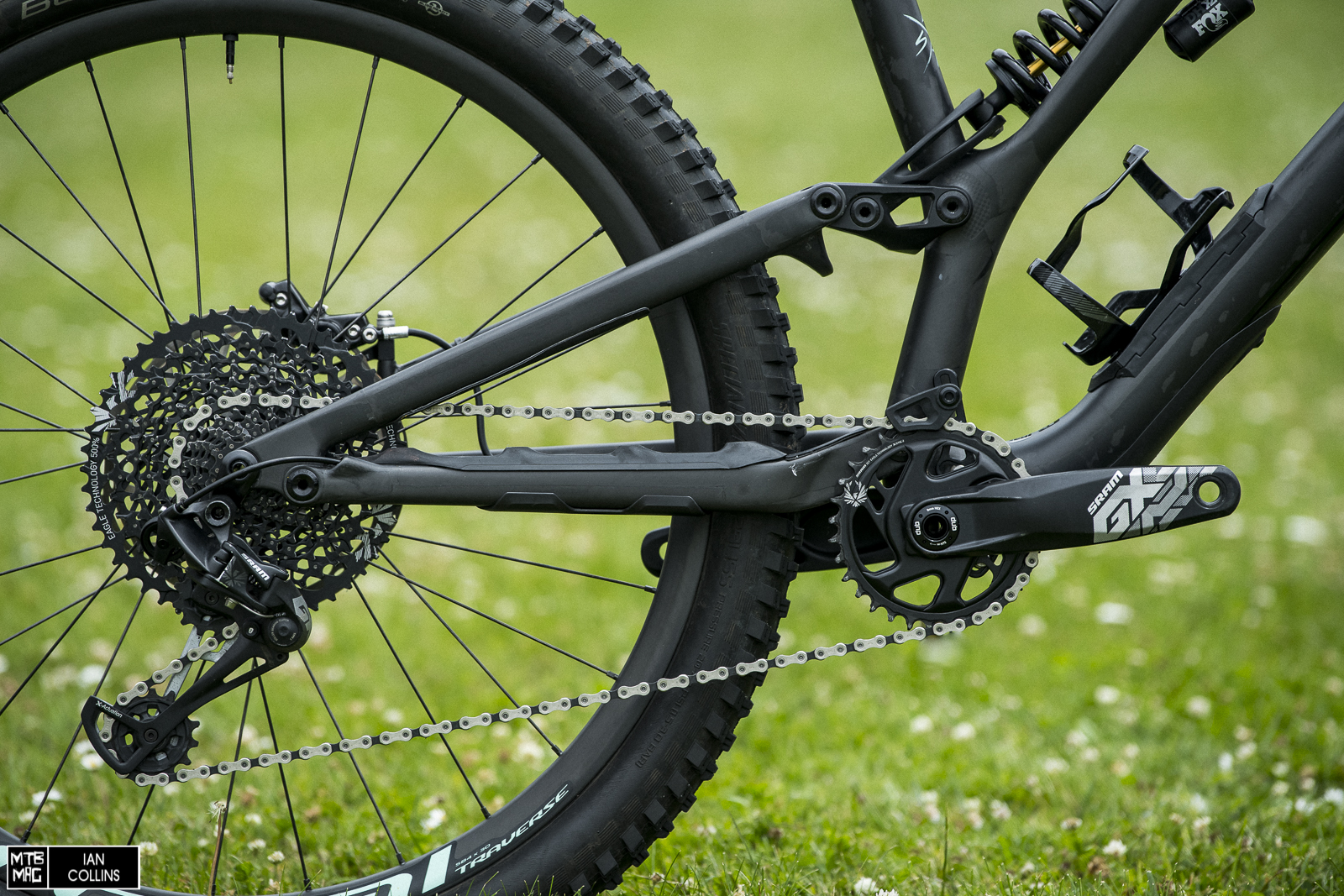 The Stumpy EVO carbon is powered by a SRAM Eagle GX 12 speed group, with the new DUB cranks and a threaded bottom bracket, for easy maintenance. While still boasting 12 speeds and seamless shifting throughout its 500% range via a 10-50T cassette, GX does lean toward the budget side. Some may grumble at this choice of spec at $6,700.00, but the only minor setback is weight. The Eagle GX Group has proven to perform 99% as well as its flagship counterparts. It’s just less flashy. 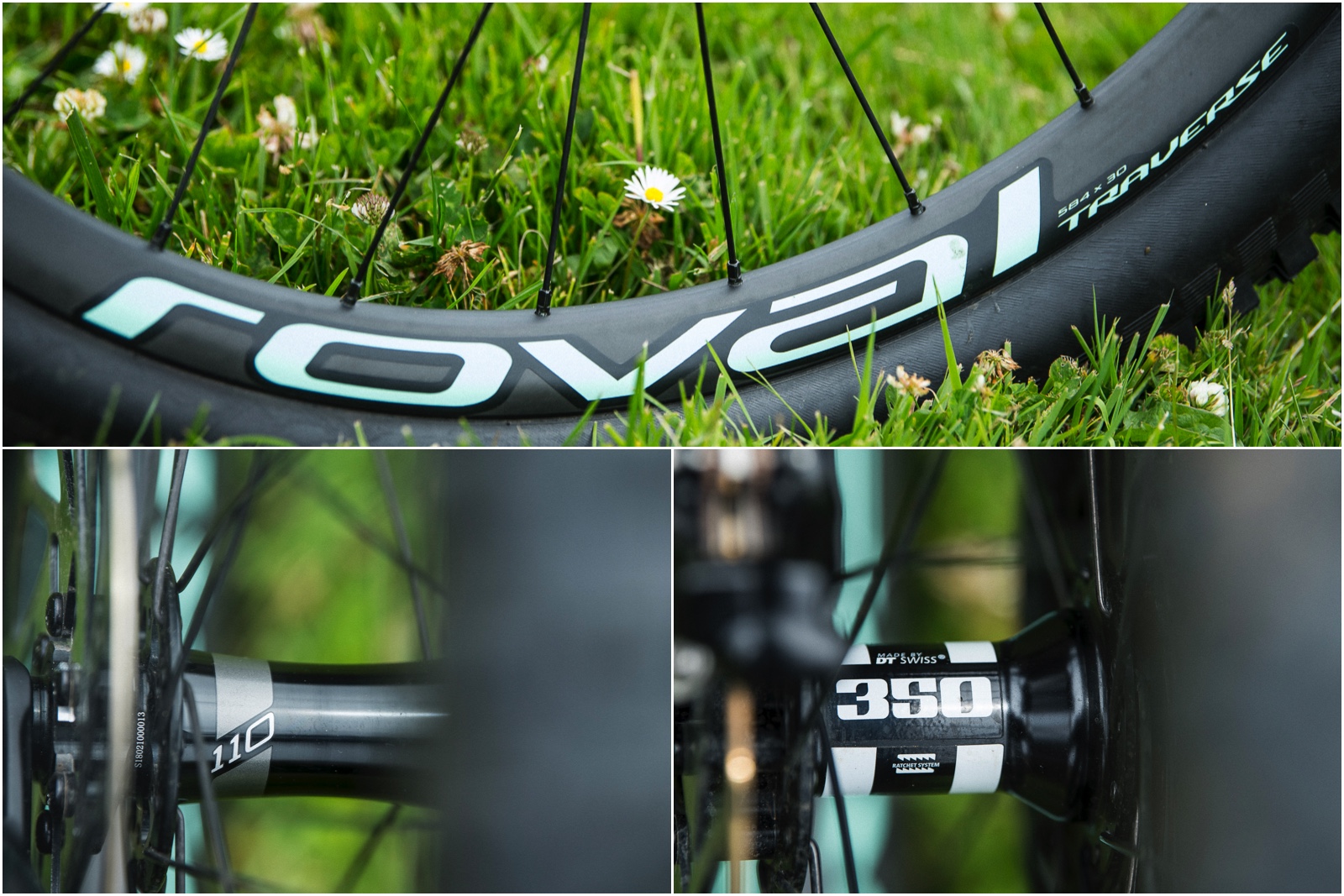 The money saved on the drivetrain is what allowed the product managers to squeeze carbon fiber Roval Traverse wheels in at this price point. We’ve tested them before and they are absolutely excellent wheels. The strength, ride quality and tire footprint that they offer are fantastic. For long term investments, the 54T star ratchet is a nice tool free upgrade that will give you faster engagement without thinning out your wallet too much. 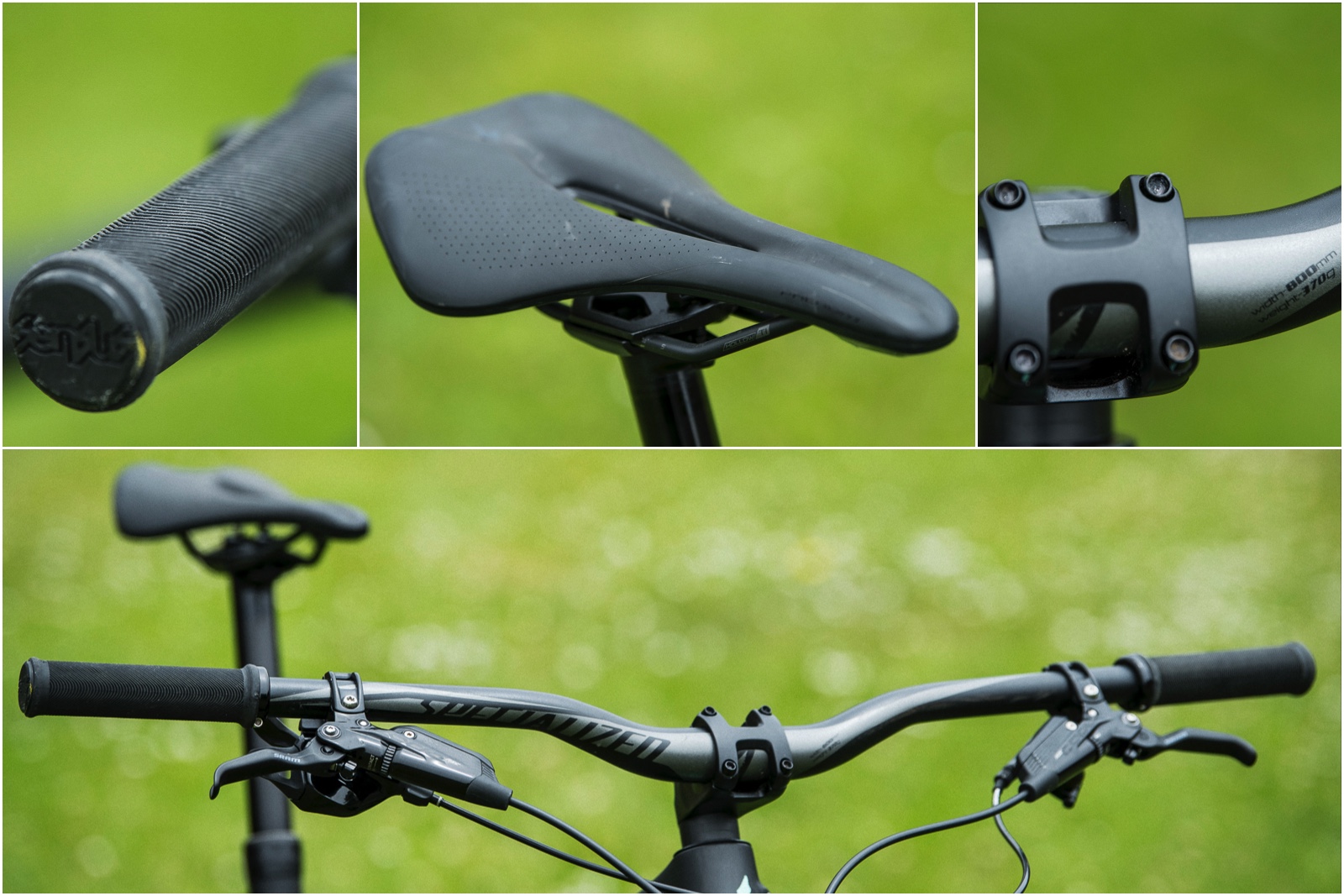 The cockpit is a combination of tough, no frills bits and some cool, core spec worth bragging about. Top left and middle – the Sensus Lite grips are some of the best around, and the Phenom saddle is very highly regarded, especially this hollow titanium rail version. Next up is a fairly run of the mill in house stem and an 800mm handlebar. While the bar is straightforward aluminum and nothing to write home about, it’s full width and I got along with its angles nicely. That said, the front end is quite low, even in its tallest position. Last, but certainly not least are SRAM Code RSC brakes with 200mm rotors front and rear, offering plenty of power, consistency and adjustability. 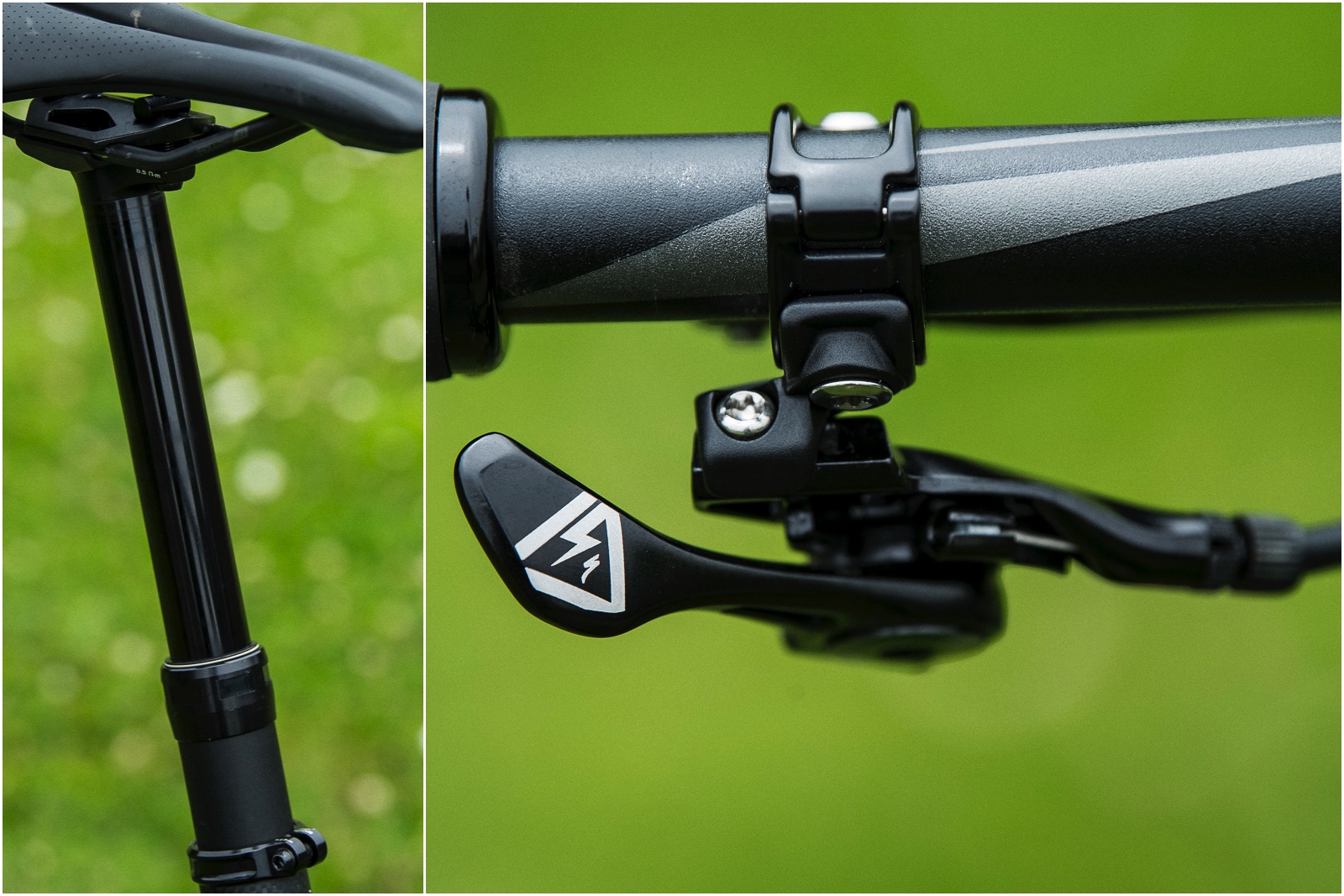 Specialized uses their Command post IRcc dropper on most of the Stumpjumpers. It’s an oversized 34.9 mm outer diameter post that has 160mm of travel and 16 increments. It’s operated by their 1X style lever that uses a Matchmaker lever mount to play nice with the SRAM Code levers. I love the lever feel, long-ish travel and stiffness, but could do without the indexing. 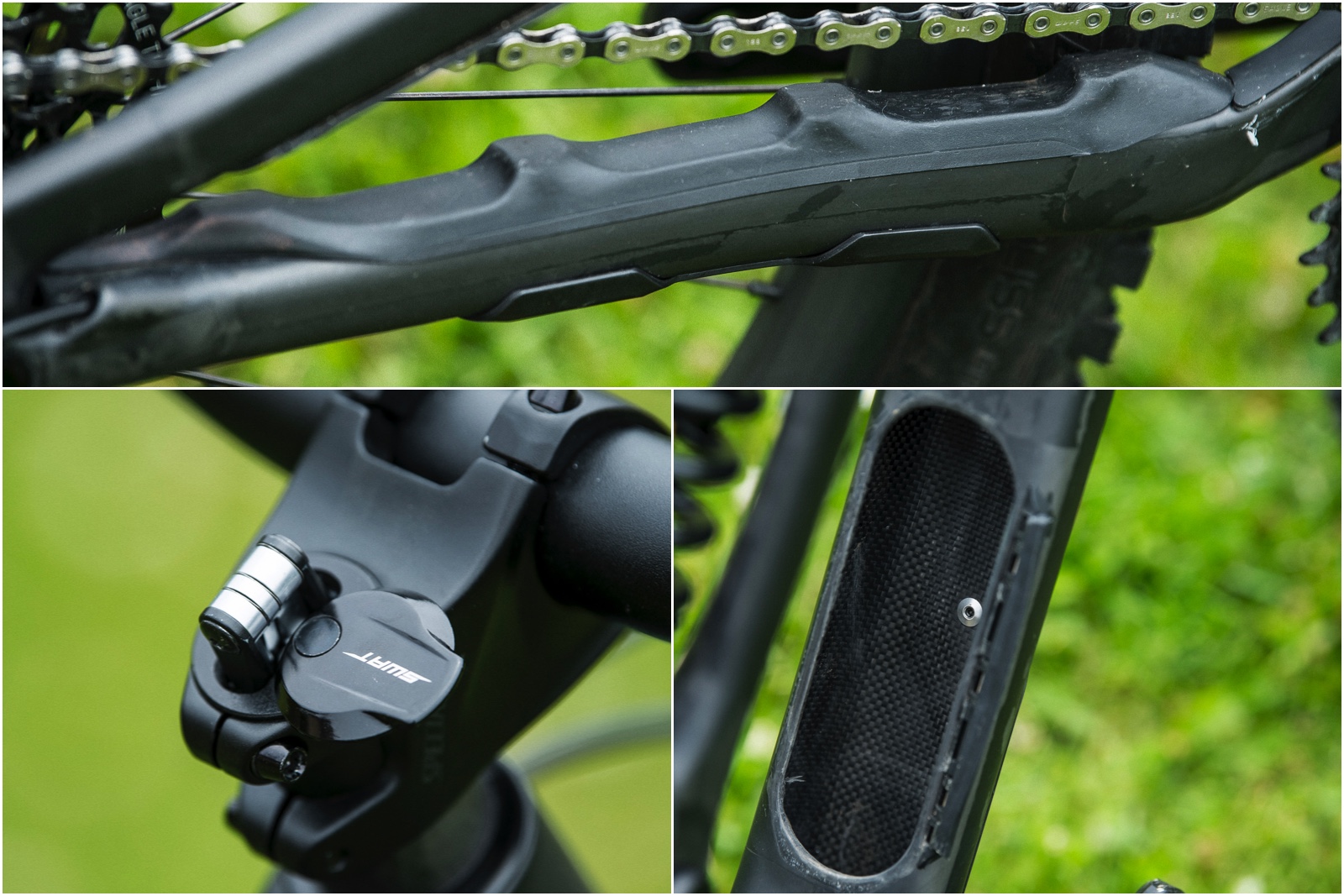 Last, but certainly not least are a few highlights that you’ll only find on Specialized bikes. Clockwise, from top: the chainstay protection prevents chain slap from being noisy via four raised nubs – yes, it works. Best of all is the updated SWAT downtube storage. It features even more room and a larger access port. ALWAYS having necessities on you and being able to ditch the hydration pack is amazing. The SWAT CC tool is genius – with a flick, a multi tool pops out of your steerer tube. The device that houses it not only works as a head lock, but it also doubles as a chain tool.

One look at the chart below and you’ll quickly realize this is not your standard Stumpy, which typically strives to be a good all arounder with “safe” geometry. The EVO on the other hand looks like its numbers were copy/pasted from a DH bike…No, really! It’s that long, low and slack. 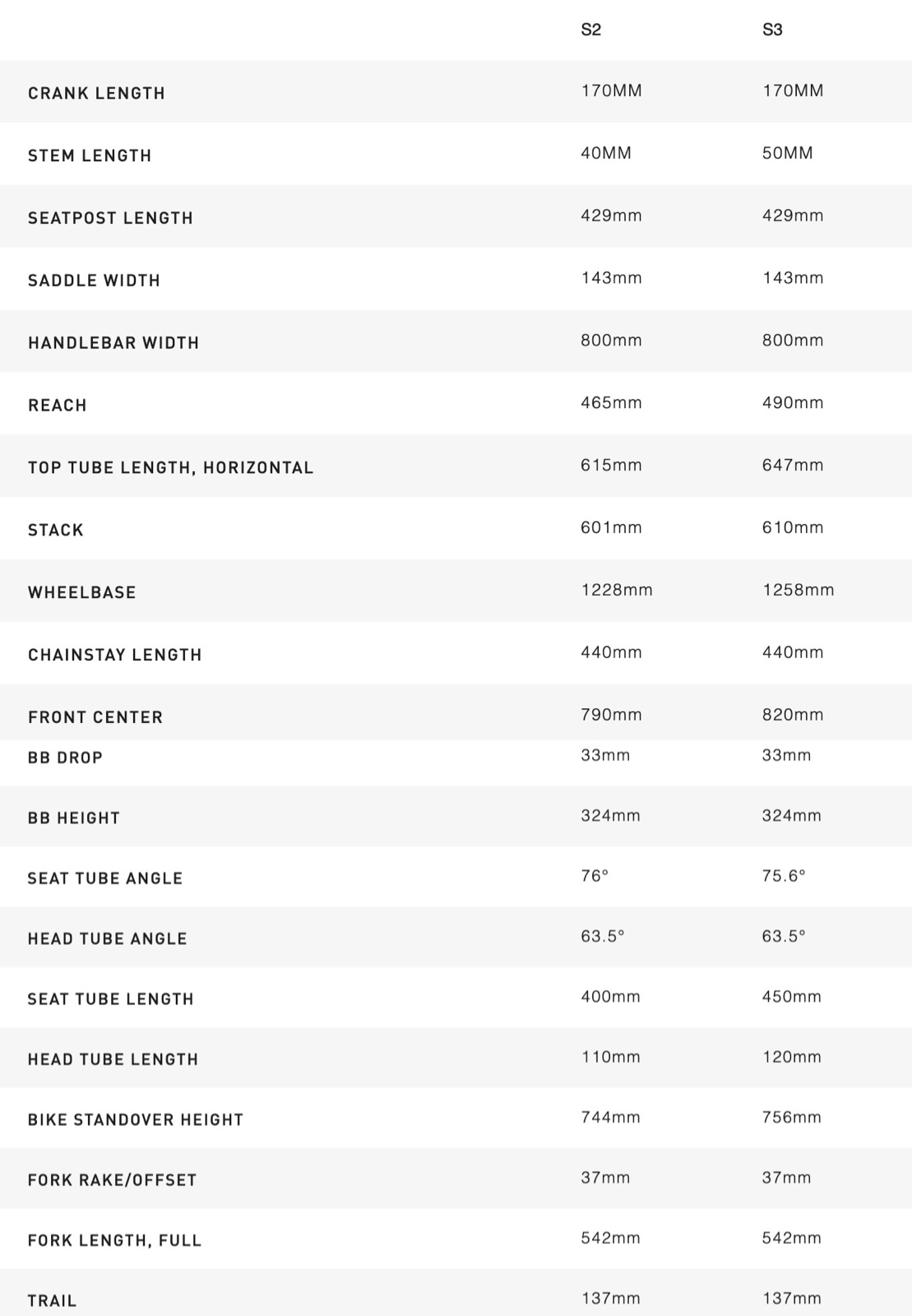 This bike adapts a geometry trend popularized by Transition bikes a couple of years ago. In short, it starts with a longer than normal reach that’s normalized by a short stem. Additionally, a slacker than usual head angle is paired with a short offset fork, which brings the front axle back in a bit to prevent the front end from getting too far from the steering axis. It also keeps the wheelbase from getting too long overall. A low bb is what you’d expect, but what might seem contrarian is the relatively long-ish 440mm chainstays. This was a choice likely made to prevent the front center: rear center balance from going too far out of balance.

Despite the fact that I usually ride a size Large bike at 6’0″ tall, I chose the “S3” size because I really wanted to feel what the EVO was all about. As this is a bit of a novelty bike for Specialized, you can’t blame them for only making two models. I would deem the two sizes as being suitably on par for those looking for a proper Medium (S2) and a somewhere between Large/XL (S3).

Despite that I continuously advocate for bikes to be sized a bit longer, the Stumpjumper EVO carbon is the actually the first bike that I’ve ridden with this newfangled “SBG” style geometry trend. 490mm reach is quite long for me, but I got along with the handling right away and had no problems managing it. That said, I think I would have found the “S3″ size to be a lot of bike in the 29” wheeled version. Anyhow, make no mistakes, this version of the Stumpy is not aimed at being a sprightly, versatile bike whose top priority is being light on its feet. Suffice to say, it got the job done in the tight sections of trail better than I anticipated, especially when accounting for things like an ultra slack 63.5º head tube angle. With all of that in mind, just remember that a bike with numbers like this needs a certain amount of speed and aggressive input from the rider to be appreciated. It’s not for the faint of heart.

As far as the spec is concerned, I think Specialized deserves the highest praise. The carbon fiber version of this bike is a very niche part of their overall lineup, and thus the product managers had to pick a darn good spec while trying to keep the price relatively reasonable. It’s not budget, not flagship, but right in between with smart choices of parts, given its intended usage. The sheep will bleat about how you can get bike X from a consumer direct brand with the same spec for less money, and there’s merit in that, but it won’t have a SWAT downtube and many of the other things that help the Big S maintain their luster. I covered the finer points of the componentry above; in short the brakes are plenty strong and the drivetrain works flawlessly, albeit at a slight weight penalty. The suspension bits are top notch quality with the fork being the crown jewel. The cockpit parts are pretty darn good all around too – certainly nothing to scoff at or rush to replace. The big highlight is the carbon fiber wheels, which really add to the ride quality while helping keeping the weight down and still managing to hang tough. 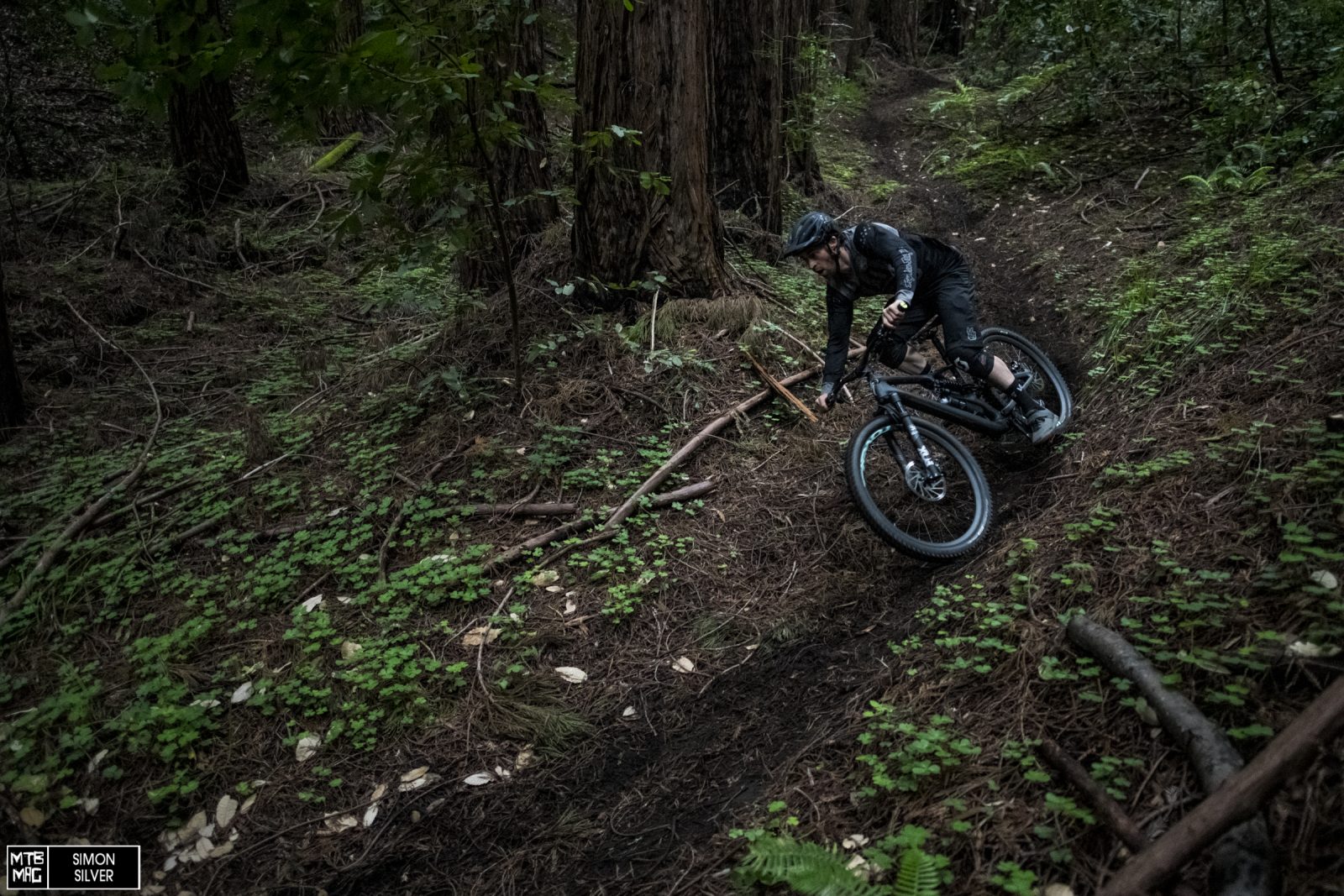 If I had one major gripe with the EVO, it’s the same gripe that I have with most Specialized bikes. They’re a bit over-leveraged in their rear suspension. To explain further, the ratio between the wheel travel and shock travel is quite high – 2.85:1, to be exact. This means higher spring rates (or more air pressure) and a shock that’s being taxed harder. At at 180 pounds, I was running a 600 pound spring and bottoming out fairly frequently, despite things riding a little harsh and feeling oversprung. That begs the question – how does this work out for a 230 pound rider who actually shreds? Where does he find an ~850 pound spring? On most of the trails that I ride (like the one in the video) there aren’t all that many rocks or chatter, so this generally wasn’t a glaring problem, for me. But when it came to rough and rugged terrain, the rear suspension got skittish and didn’t track very well. In short, I’ve ridden other bikes with different suspension layouts that made 150mm of travel feel like it went way further. Upping to 29″ wheels would help the bike smooth out the rough, but that doesn’t let the suspension off the hook. The leverage rate curve is also quite linear, so while I’m a huge fan of coil shocks on trail bikes, I think this bike might actually be better suited to an air shock, or at least a more supportive damper than the DHX2, which is notoriously linear in nature, and needs a much bigger bottom out bumper.

Specialized really nailed it with the geometry, material layup and spec on this bike. If you ride really burly (read: rough) terrain, the rear suspension might feel relatively nervous, but perhaps a different shock (Push just announced an 11.6 for Stumpy), or the 29″ wheeled version would help. Under the right pilot, this bike will blow minds, with its handling above all. It carries speed in the corners like nothing I’ve ever ridden, and is shockingly snappy considering what a big bike it is. The SWAT downtube is a huge bonus as it means you can ditch the hydration pack. Other Specialized originals like the hidden tool in the steerer and the quiet chainstay protection are also subtle, but important bonuses. All in all, it’s a great bike for the right rider, but if I wasn’t giving it back, I most certainly would be dabbling getting more out of the back end.