After the Specialized Enduro 29 Pro carbon and Trek Slash 9.8 29 comparative test, we had the chance to conduct detailed tests of each model. A direct contemporary test on the same trails is the best way to highlight the differences and subtleties between the two bikes, but extensive riding on well know trails is better to reveal the overall highs and lows of each one of them. Here we present the review of the Slash 9.8 29, the new 29” wheelsed enduro weapon by Trek. 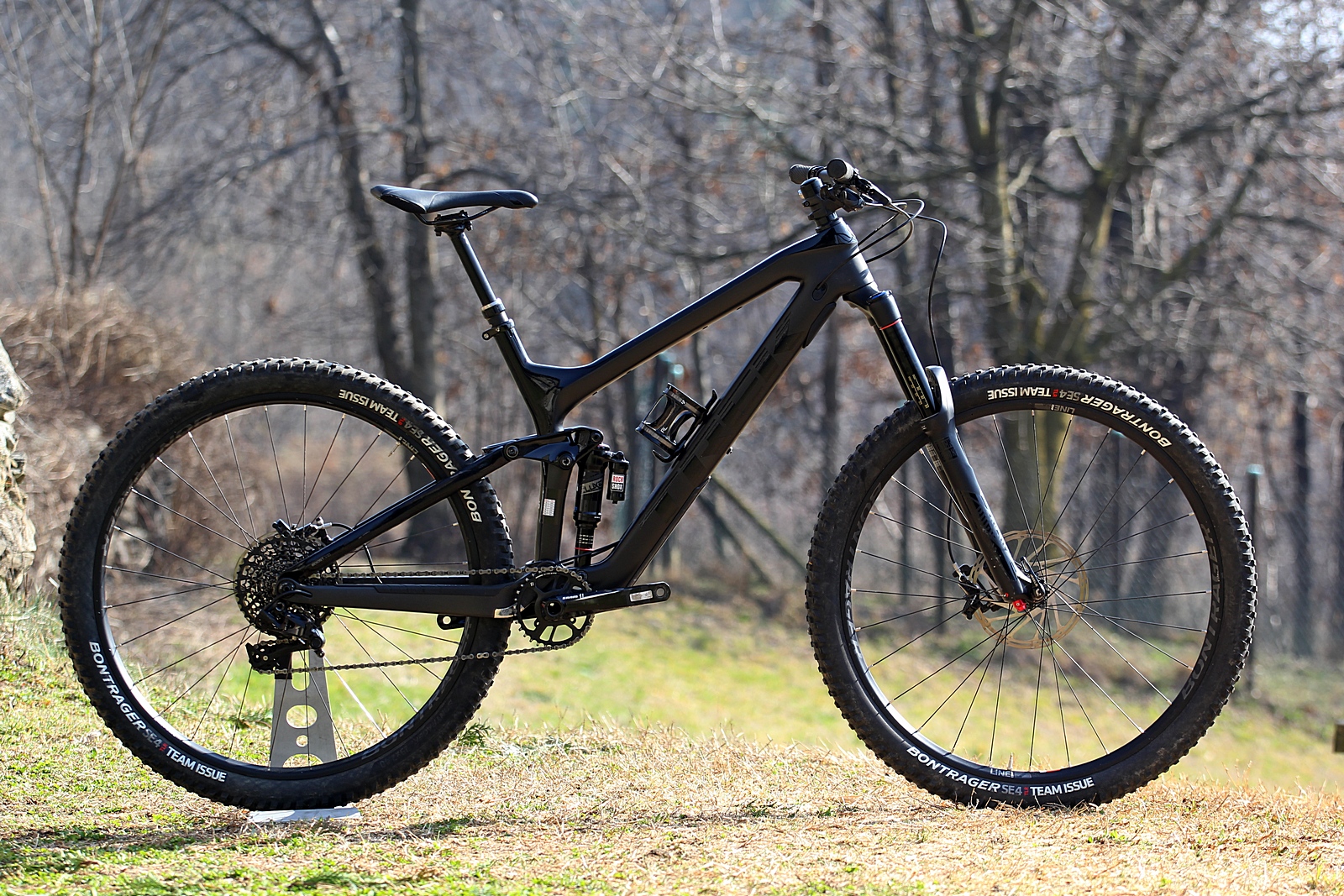 Like all the Trek full suspended bikes, the Slash also has the Minolink, a flip chip which allows you to move the pivot point between the seat stay and the shock link, enabling you to choose between a higher/steeper and lower/slacker configuration. In the first one the angles are steeper and the bottom bracket is higher. In low configuration the angles are 0.5 degree slacker and the bottom bracket is 7mm lower. It doesn’t take too much time to switch to the other configuration and it can also be done on trail: using a 5mm allen key you need to remove the two plates (one on each side), rotate them by 180° and tighten them back into position. 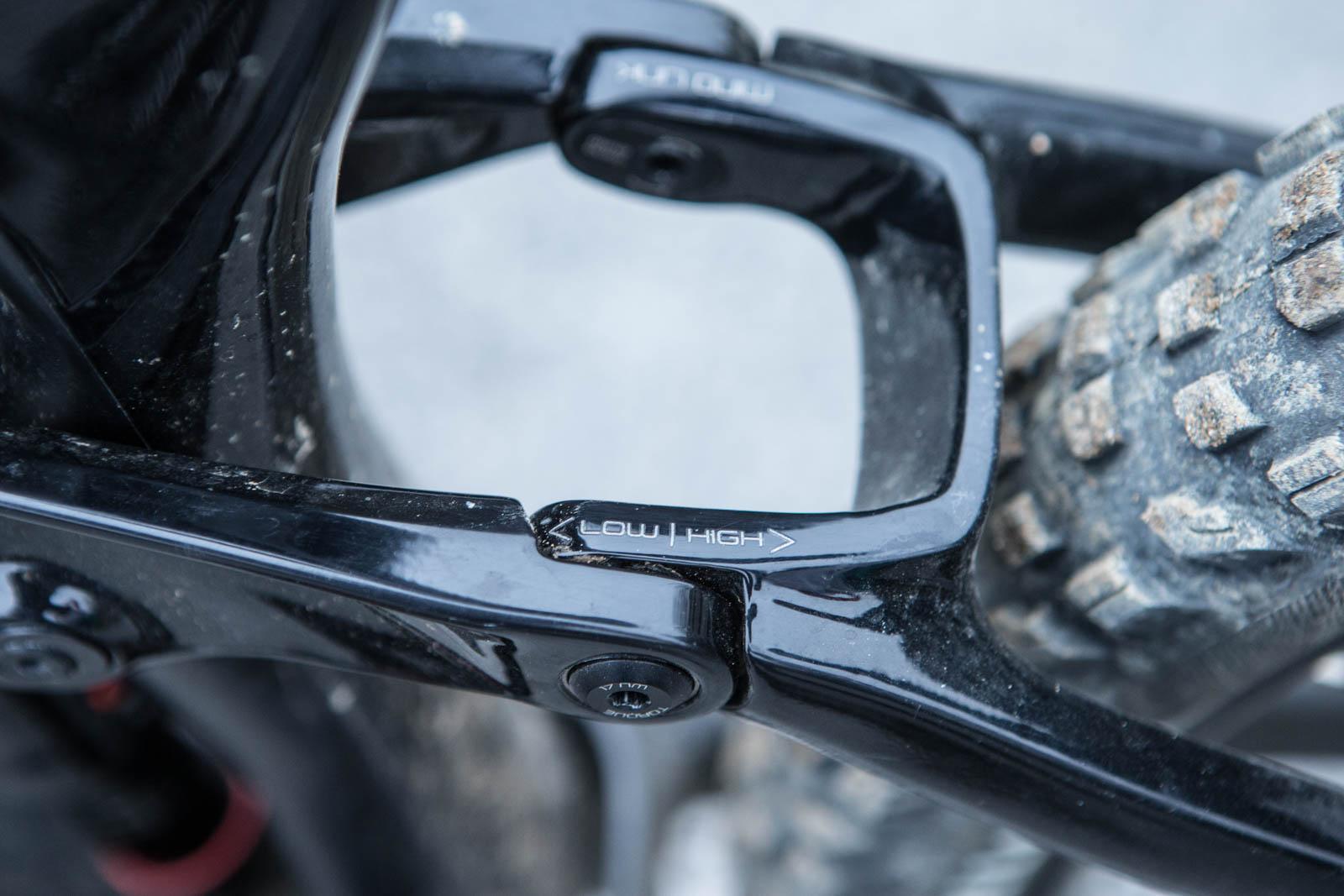 The Slash is one of the few enduro 29ers with a head angle slacker than 65.5°. In low configuration the head angle drops to 65.1° which is lower than that of most of the competitors enduro bikes and also even  lower than a lot of 27.5 ones. As a consequence, the wheelbase of the tested L size (19.5”) is very long: it measures 1219mm. The chainstay height is only 434mm (433mm in high configuration) to be nimble enough with such a slack head angle and long wheelbase. The actual tube real angle is 64.8°. Despite the good 74.1° effective angle, for those long legged folks running a higher seat, this results in a rearward pedaling position.

The Slash 2017 model is available in two builds: the reviewed 9.8 and the top 9.9 model. The full carbon frame is the same for both builds, the 9.9 comes in black while the 9.8 in red. For those who like to customise their bike, Trek offers also the frame set alone available in red as in the 9.9 build. Here you find the pdf with the specs of both builds.

Trek’s experience in carbon processing dates back to 1991. On the Slash they opted for the OCLV Mountain fiber, developed with aerospace engineering techniques, to be applied in the hardest conditions. The frame is built with the more recent standards: metric shock spacing, front and rear boost hub spacing. Unlike the bottle cage mount, the front derailleur mount is not provided. 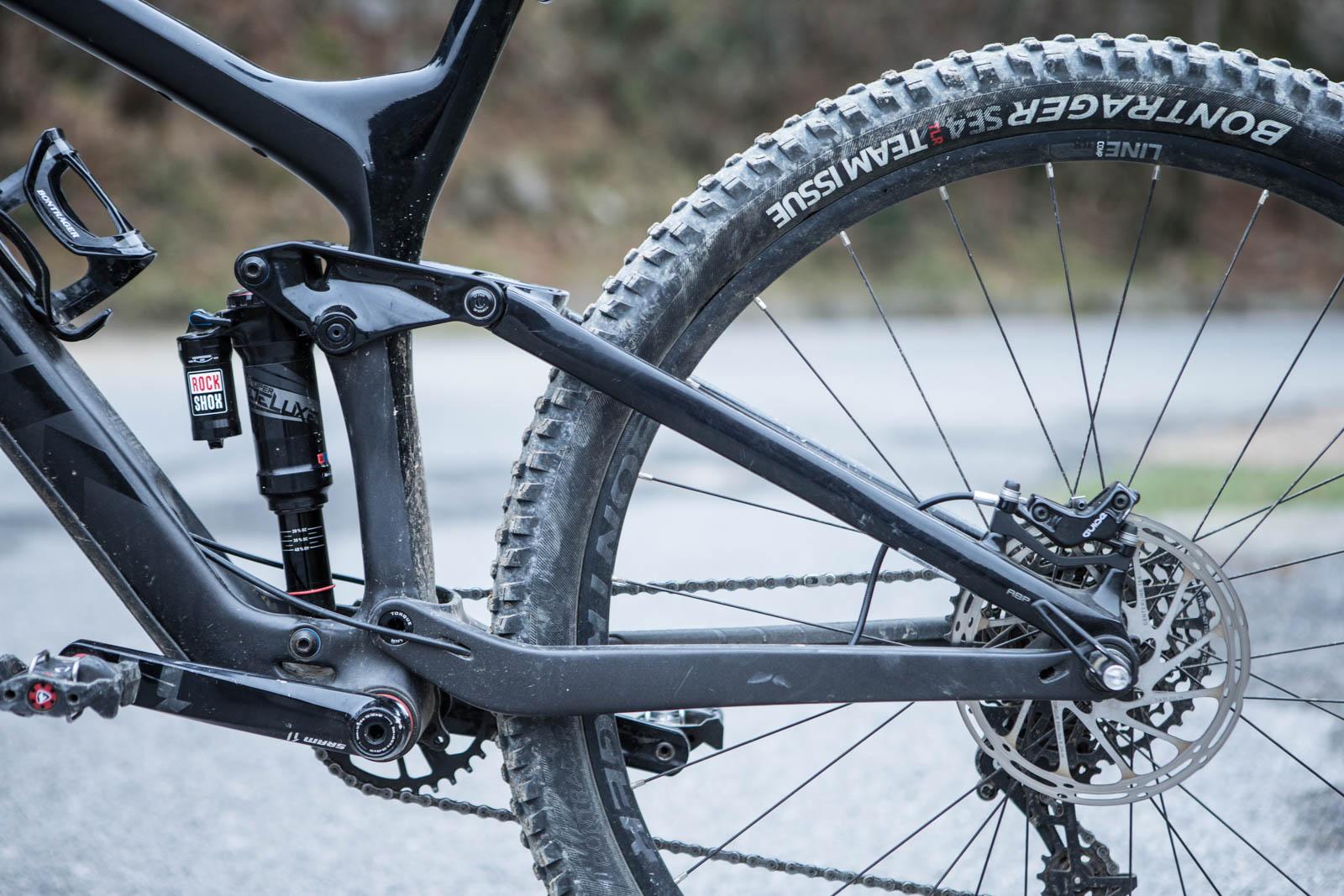 The suspension layout is the well-known ABP, with the rear suspension pivot concentric to the rear wheel axle. 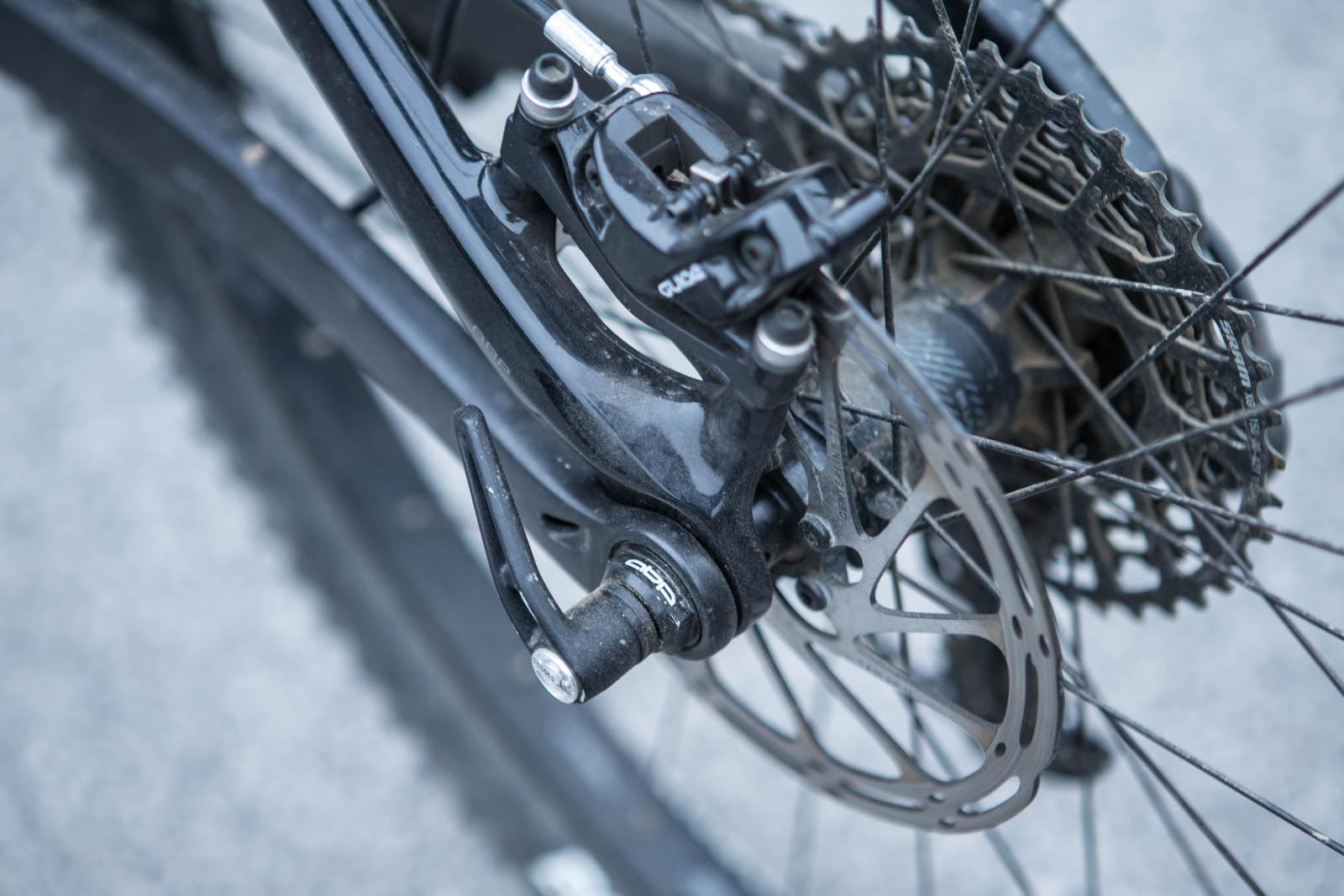 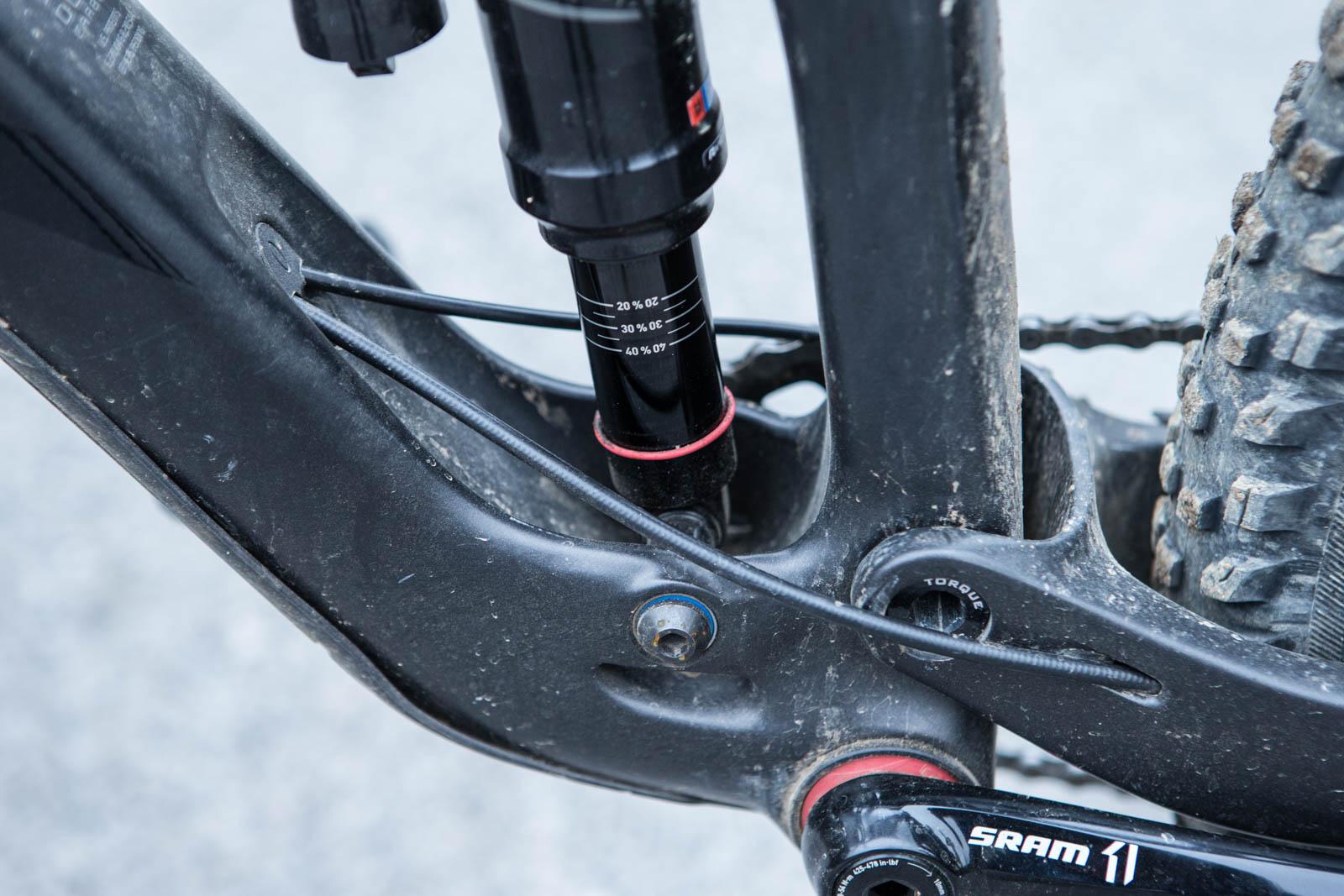 A new characteristic is that the floating lower shock mount has been dismissed. The shock is now anchored directly to the main triangle close to the bottom bracket shell. This has been done to maximise stiffness and not due to a rejection of the full floater (still used on other models). 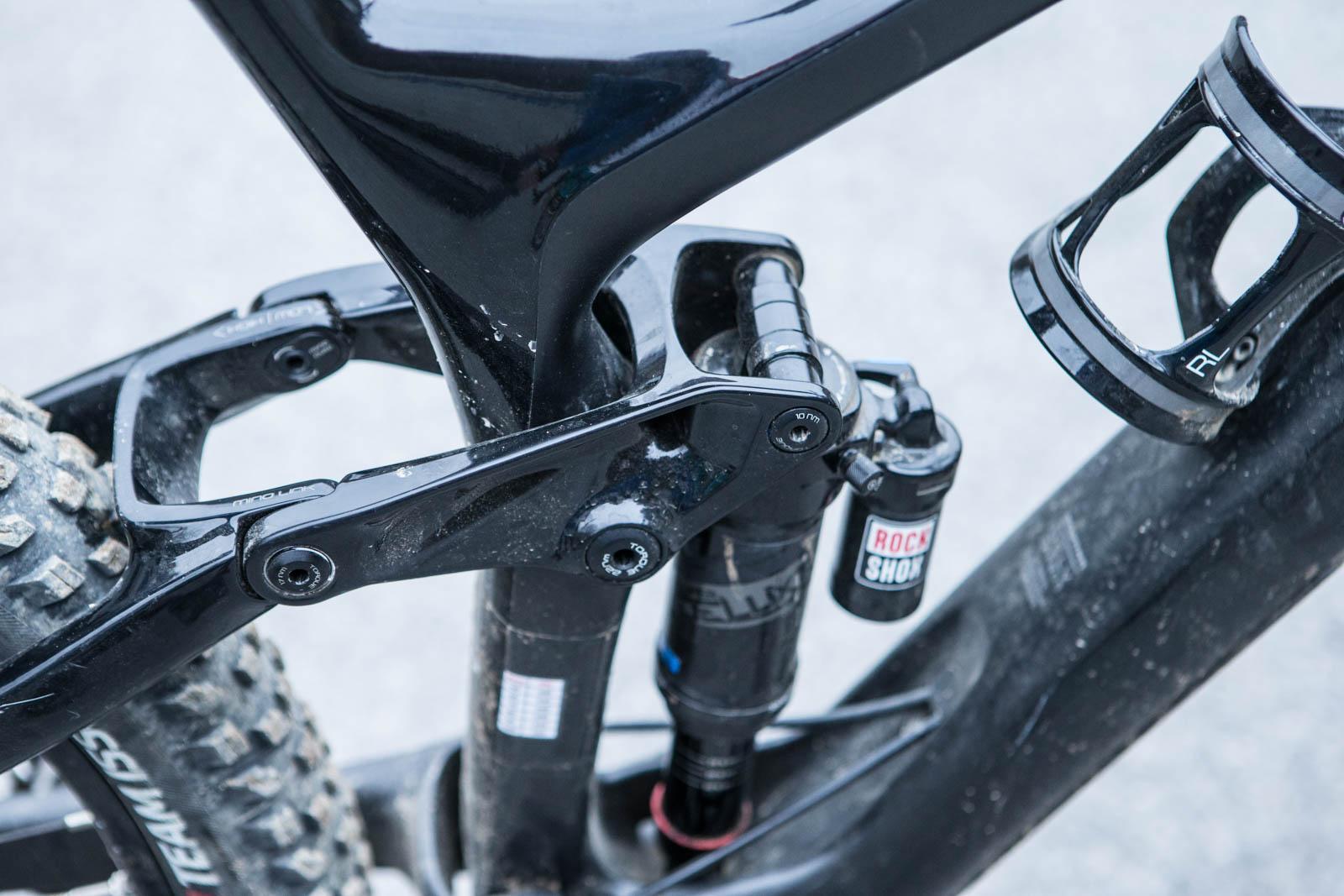 The rear triangle stiffness is in part due to the solid shock link (EVO link) and burly pivots, which minimise lateral twisting. 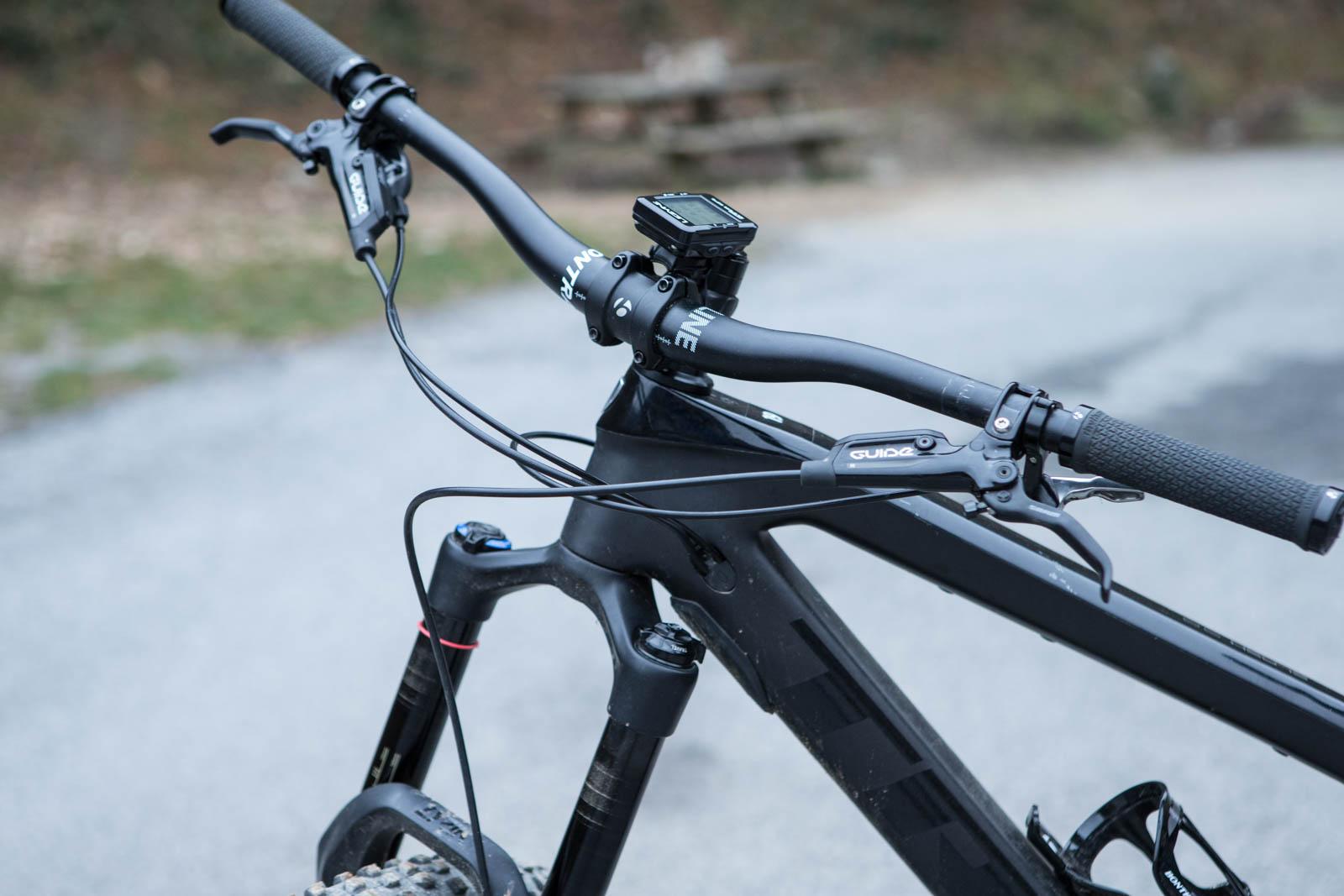 Another element which contributes to the overall stiffness of the bike is the so-called “Straight Shot frame design”: no down-tube bending near the steering tube. No offence to those frames which resembles Gaudì paintings, but it is with straight tubes that the best weight to stiffness ratio is obtained. In fact, Trek claim that this frame tests stiffer than their Session DH bike. 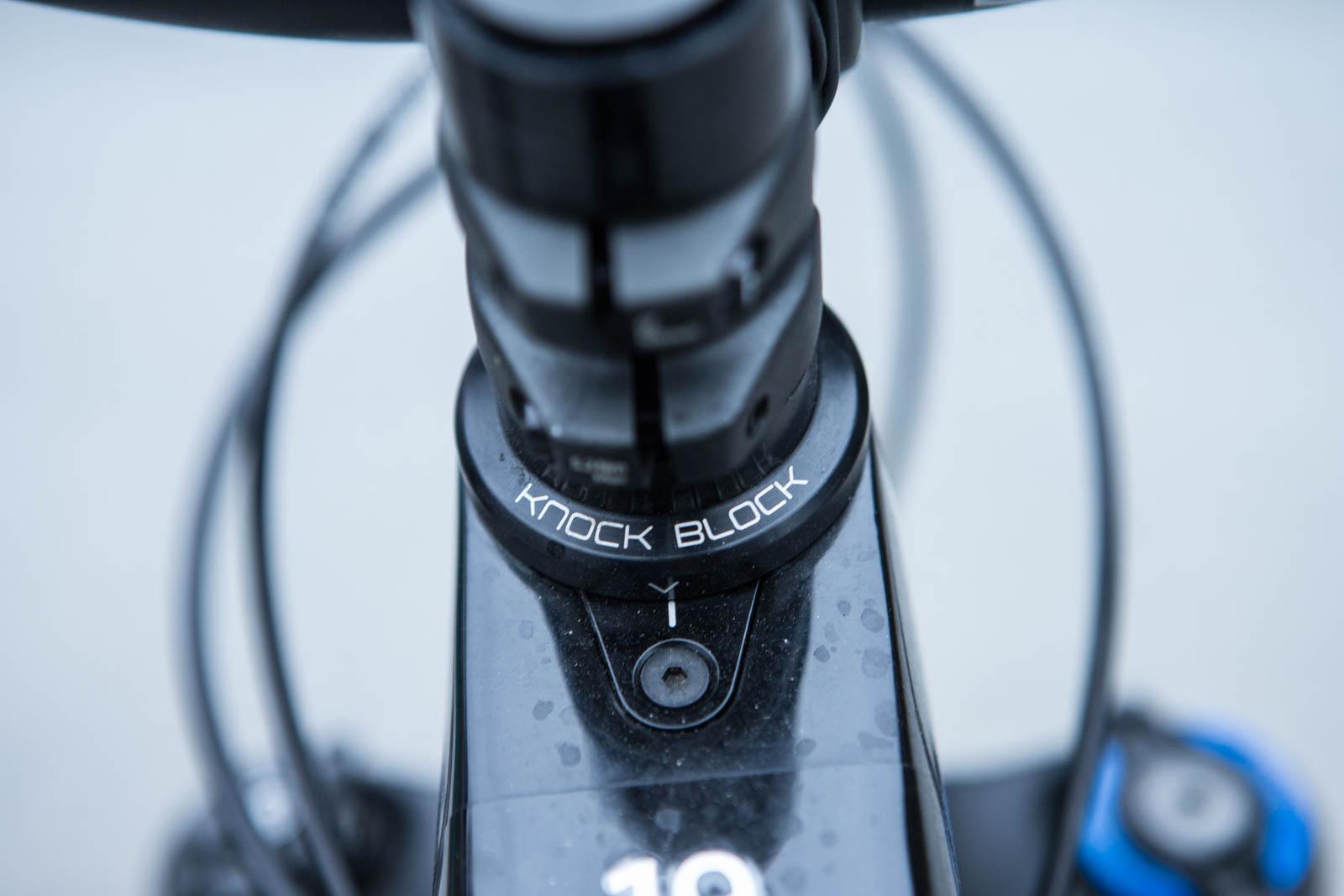 Trek technicians invented the Knock Block: a device which prevents the full rotation of the handlebar. In this way, in case of a violent turn of the bar (for example as a consequence of a fall), the head of the fork can’t damage the down tube. This is obtained thanks to a specifically shaped stem, headset top cap and spacers, together with a limit plate screwed onto the top tube. Be careful if you decide to replace any of these parts! For more safety, on the down tube there is also a thick protection. 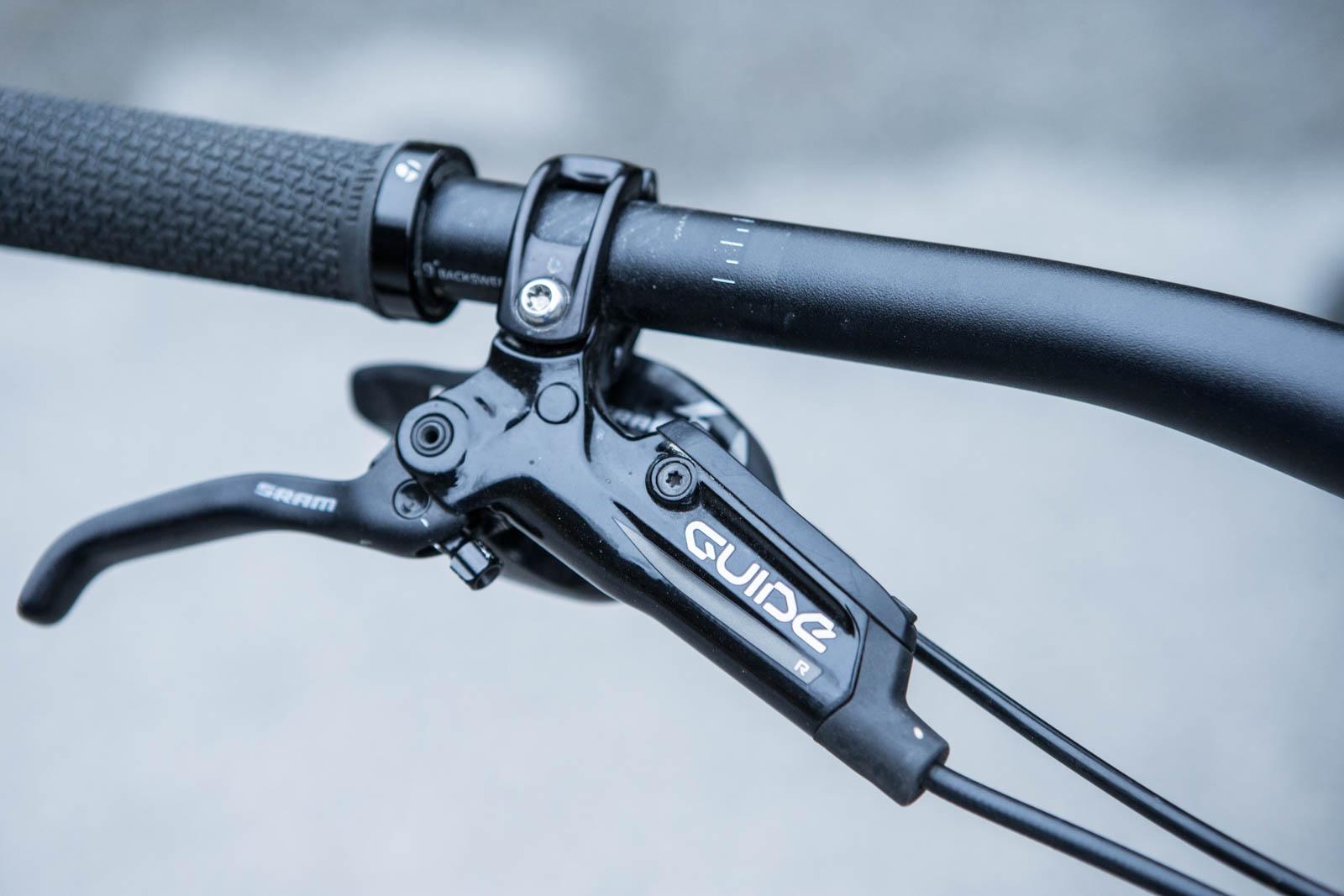 We already stated this in the comparative test: SRAM Guide R brakes do not suit a downhill-oriented bike like the Slash. They’re not powerful enough and have excessive and irregular lever travel. Even though this is a common braking system, on the other hand we’d hope for something more than a basic model on a 5,000 Euro bike. 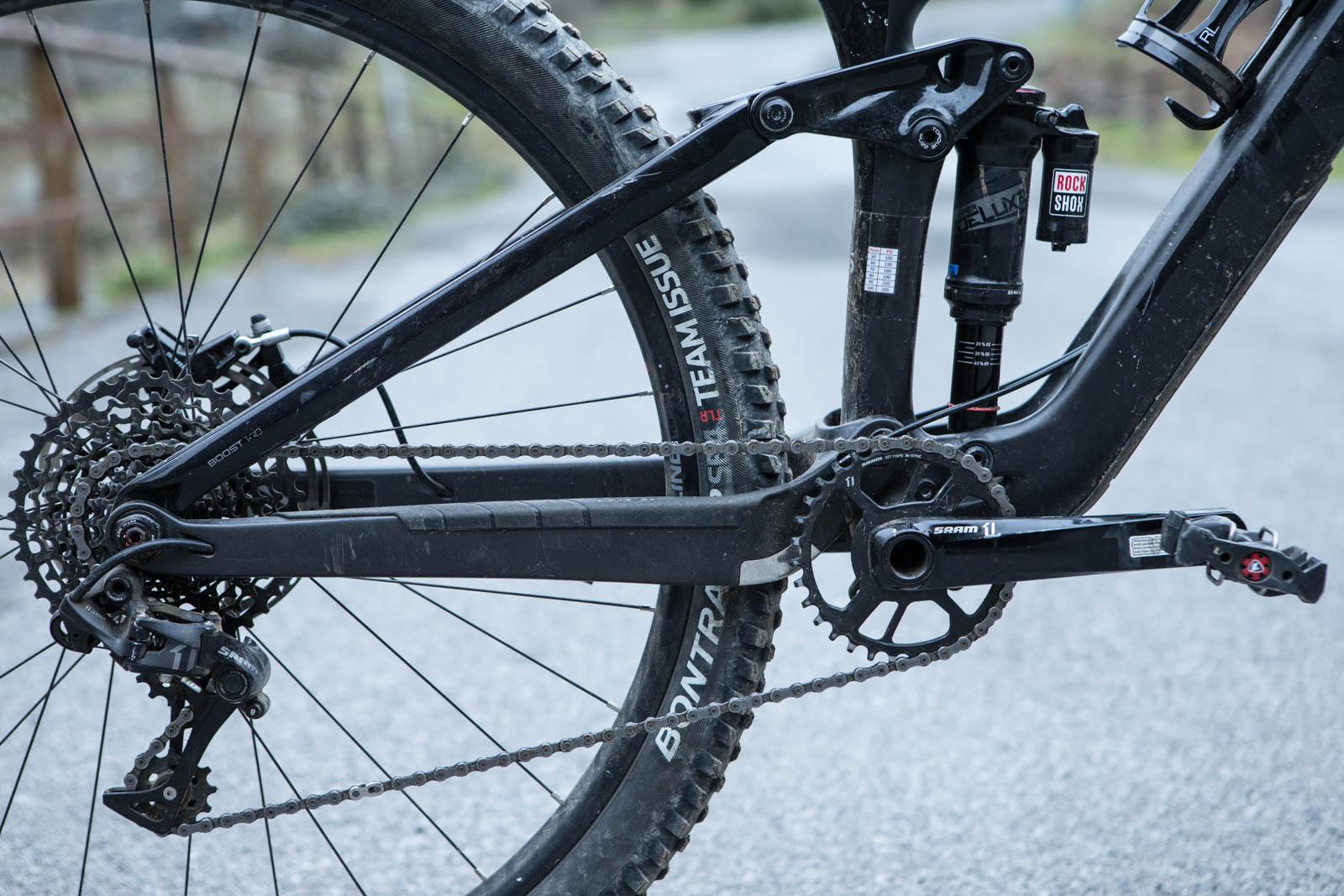 The 32tooth chainring combined with the 11 speed 10-42t cassette is quite demanding if you’re not fit enough, but it is good for competitions. The transmission worked perfectly despite how quickly it looked worn in. 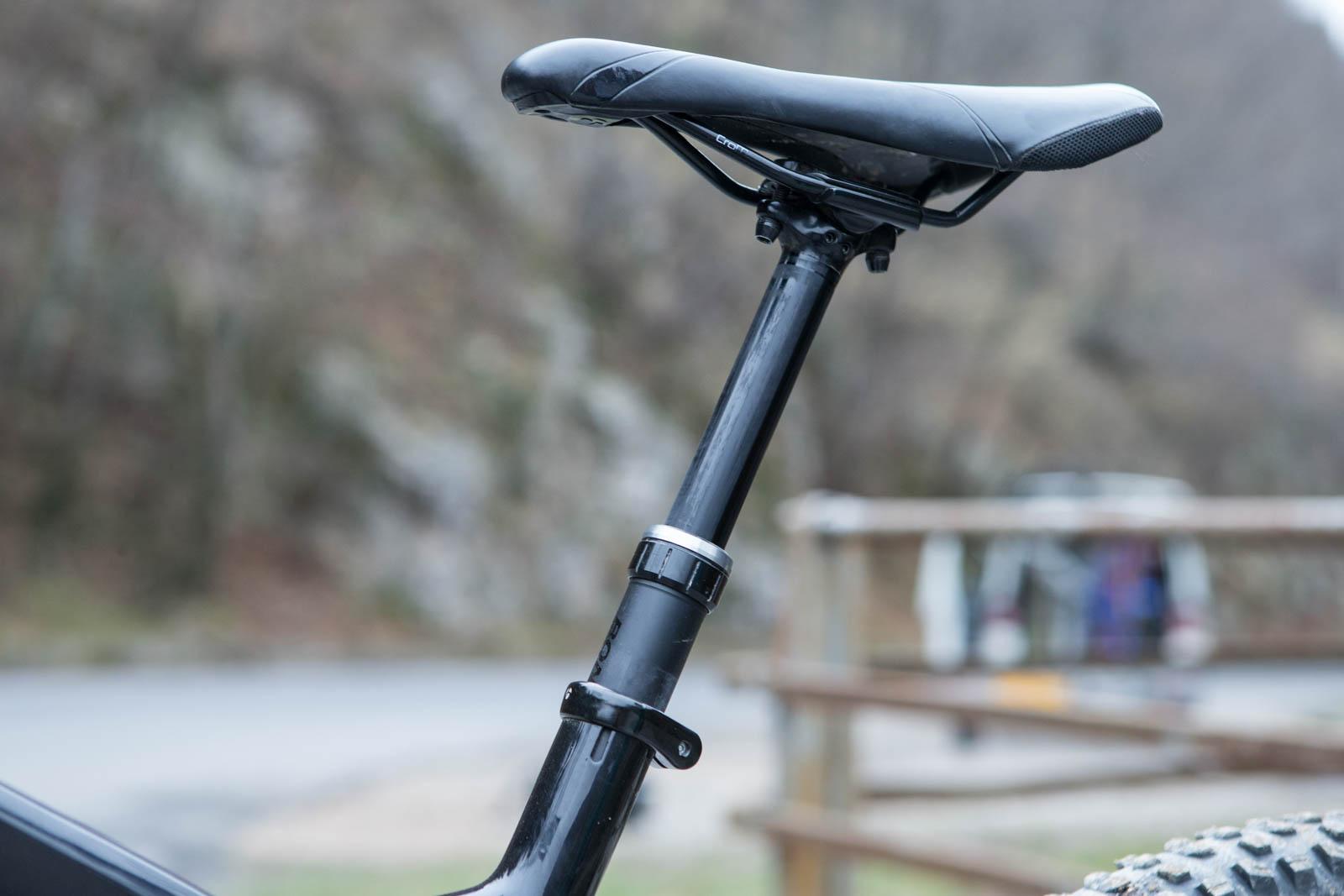 Here again we repeat the same thoughts already expressed in the comparative test. What’s the point in having a dropper post with 125mm of travel on a size Large with a 468mm seat tube? The frame supports up to 215mm of length so there is no problem in choosing a model with at least 150mm of travel (the 150mm Reverb, for example, is 210mm long). 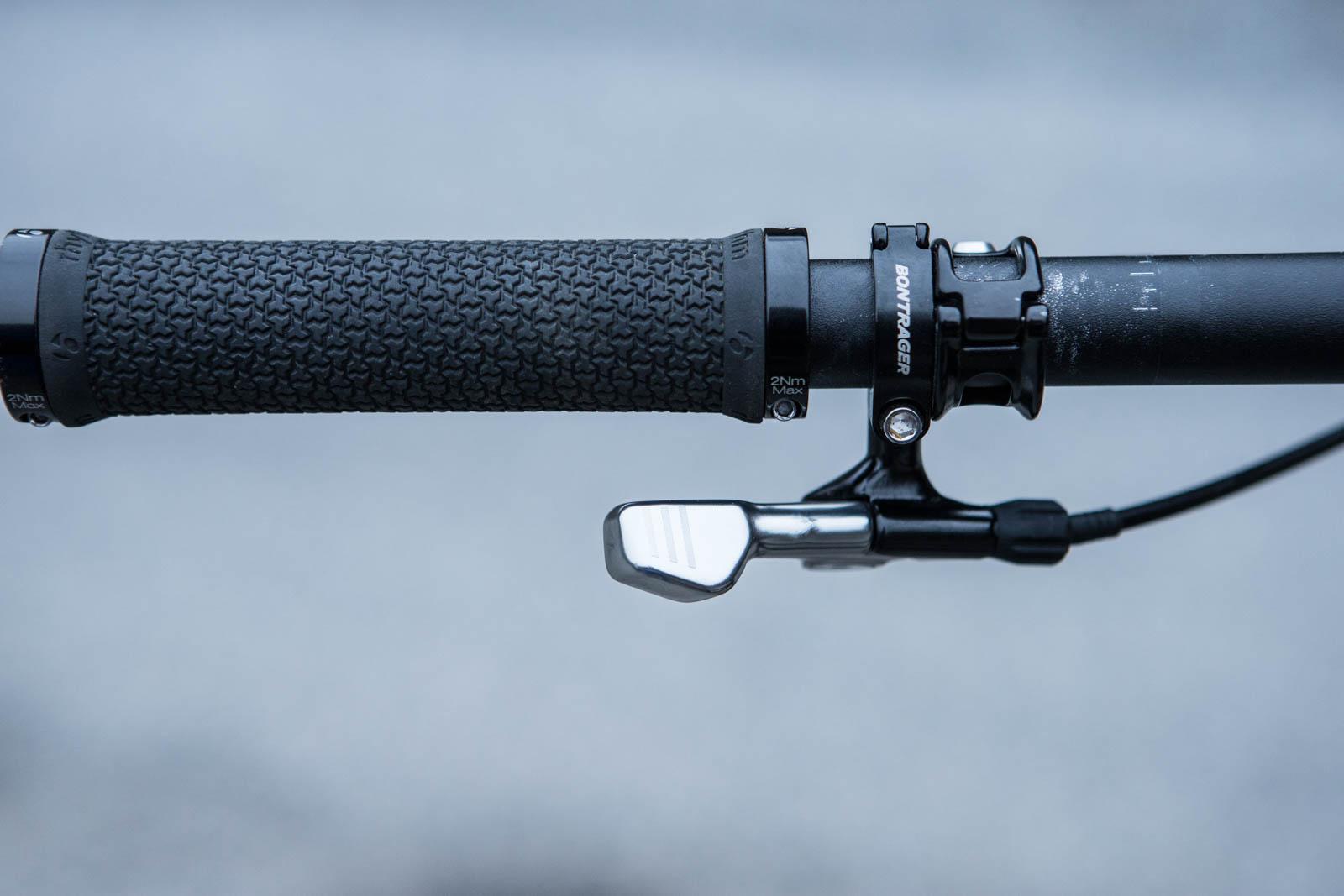 The remote is ergonomic and comfortable to reach. The dropper post works smoothly, but the angle of the seat tube requires you to lean forward in order to follow the drop of the seat. Otherwise it tends to block. 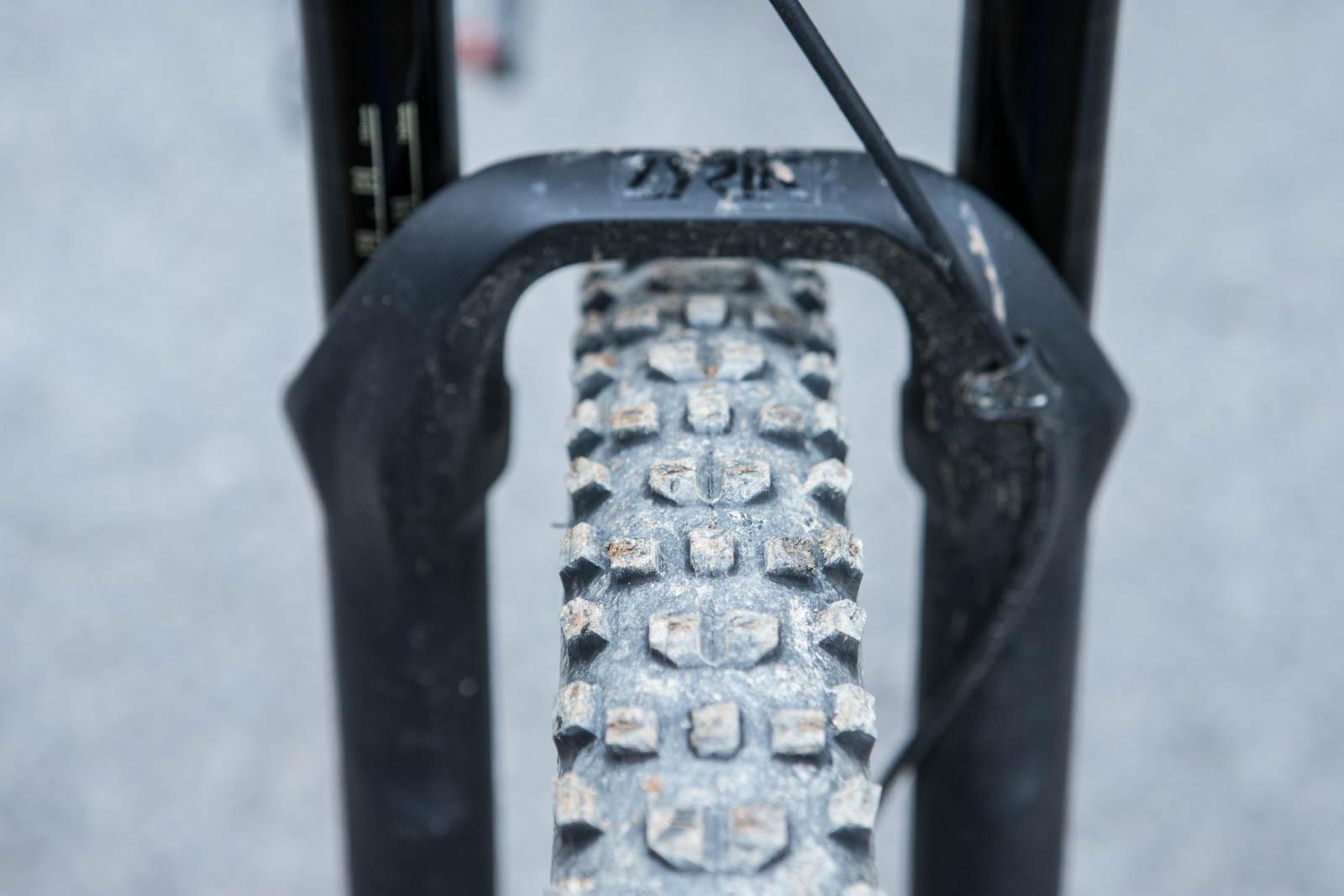 SE4 Team Issue tires are nice but, at least up front, we would have preferred the better performing SE5 (here is the test): a downhill-oriented bike like the Slash deserves it. 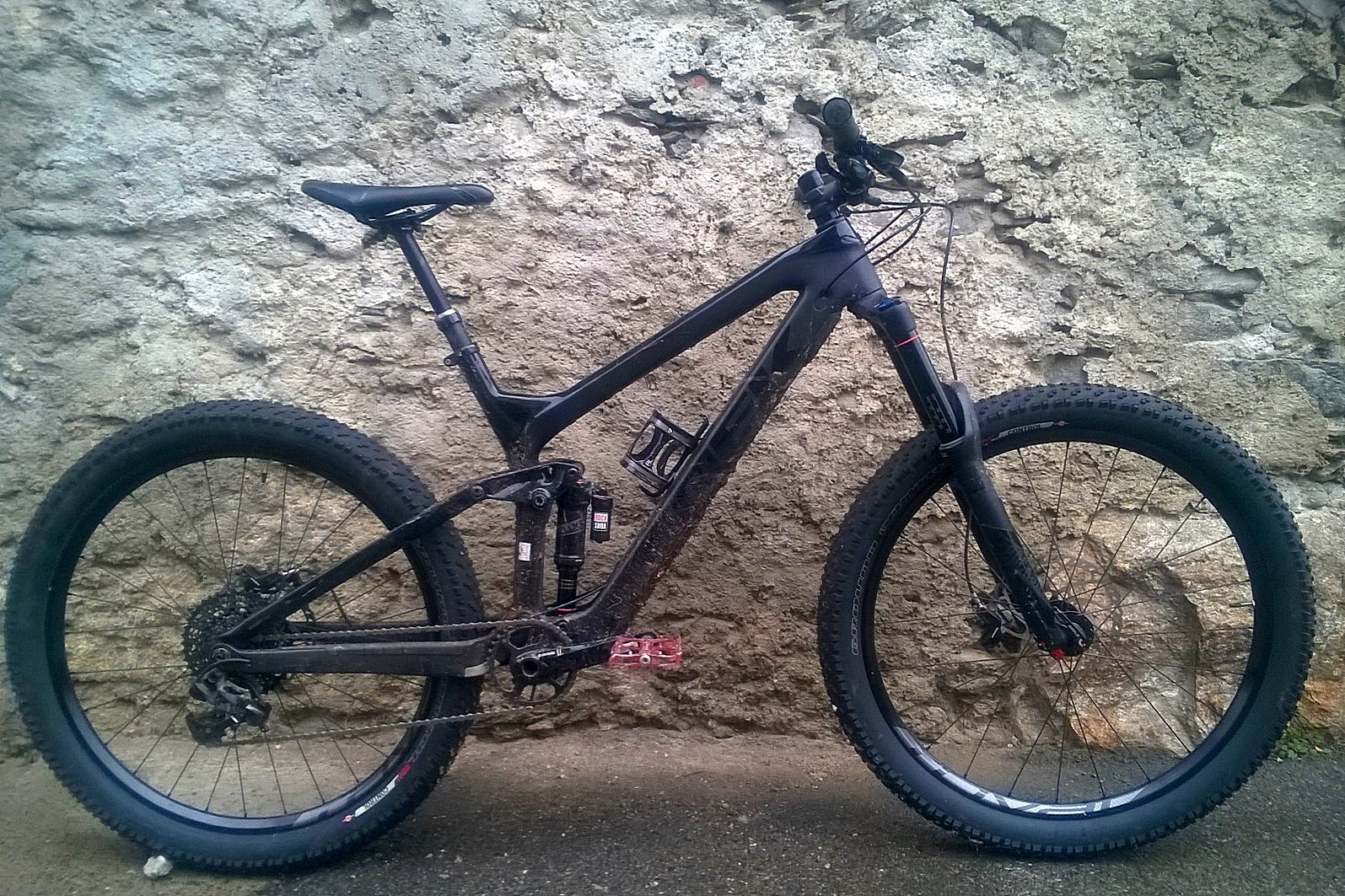 Despite front and rear standard boost, Trek claims 650+ wheels are not supported. Since we found no reasons for that, we installed an average 650+ wheelset (74mm of maximum width). As we initially thought, they fit with a 10mm of gap between the tire and the chainstay (we’ve seen worse, and not necessarily in plus format). Provided that we don’t suggest installing this format, there is no specific down side apart from the forced high position of the Minolink (in low position the bottom bracket would be too low). We can only speculate as to why Trek doesn’t consider the use of plus tires. Maybe it is because the Slash is meant to be a pure enduro racer, and in that field plus tires are not much appreciated. For a more relaxed context, maybe on technical alpine trails, it’s an option worth taking into consideration. 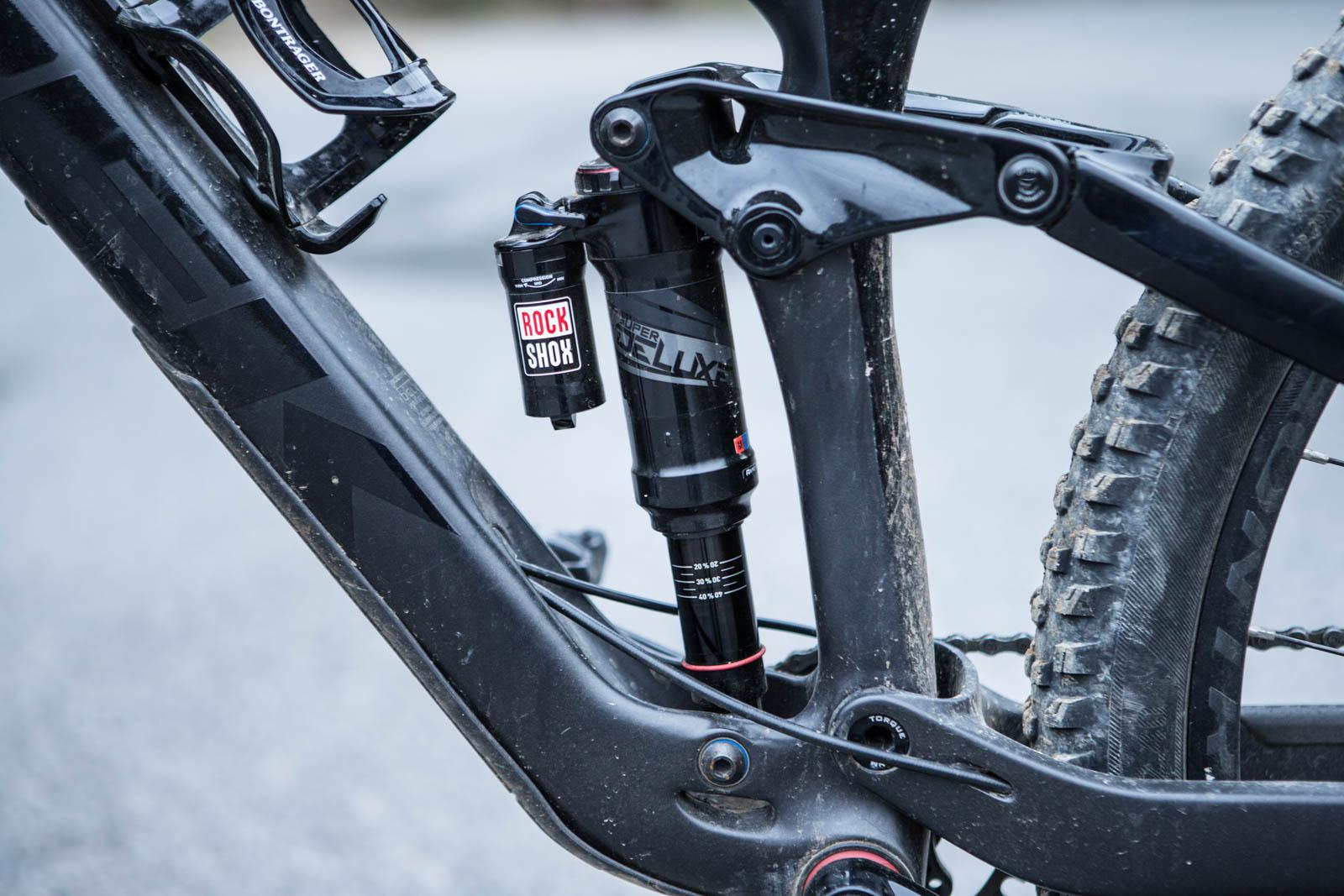 While the top of the line 9.9 is equipped with Fox suspensions, the 9.8 mounts RockShox suspensions. The 230×57.5 mm SuperDeluxe RC3 metric shock impressed us: it is sensitive and smooth in open position and firm in lock position. The pedal position is actually in the middle between open and lock and in fact it is perfect for pedaling. Due to the shock placement, it’s a bit uncomfortable to move the lever, especially going from Open to Lock position. The rebound control, placed on top of the shock, is instead very handy.

The massive Lyrik Dual Position fork with RC hydraulics had only one air token installed. Furthermore, reduced progressivity forced us to use higher pressure values than the ones suggested by RS in relation to the weight of the rider. By adding one token, we could cut some psi of pressure and gain more sensitivity. We would have added some more. A lot of people prefer Solo Air models since they’re thought to work better, be lighter and more reliable than Dual Position ones. On the Slash, especially on pedaling trails or steep climbs, the possibility to lower the front can make the difference, in particular for those with a high seat position. Hydraulics is the only critical point. The RC works well and compression tuning is efficient, but on such a solid performing and pricey bike we would have chosen the high-performing hydraulics of the RCT3.

Modern enduro bikes are not the best climbers, especially on technical terrain, and the Slash was not going to be an exception. After some tests in various conditions, we have to make some clarifications. First of all about the incline: when the pitch is not extremely steep, the pedal stroke is smooth enough and with an adequate pace it is also possible to overcome high elevation gains without seeing the mirage of a cable car. The SuperDeluxe RC3 3-position compression tuning works efficiently and in Lock position there is almost no bobbing.

The effort increases exponentially when the gradient does, not because of the added steepness in the climbs (the adjustable fork helps a lot), but mainly because of the fatigue in the long run. At the base of a long and steep climb, it is worth spending a couple of seconds to set the Minolink in high position, especially for those who need a higher seat position. Of course this is not the ideal bike for technical and curvy climbs, but its ability to clear obstacles is still quite good. 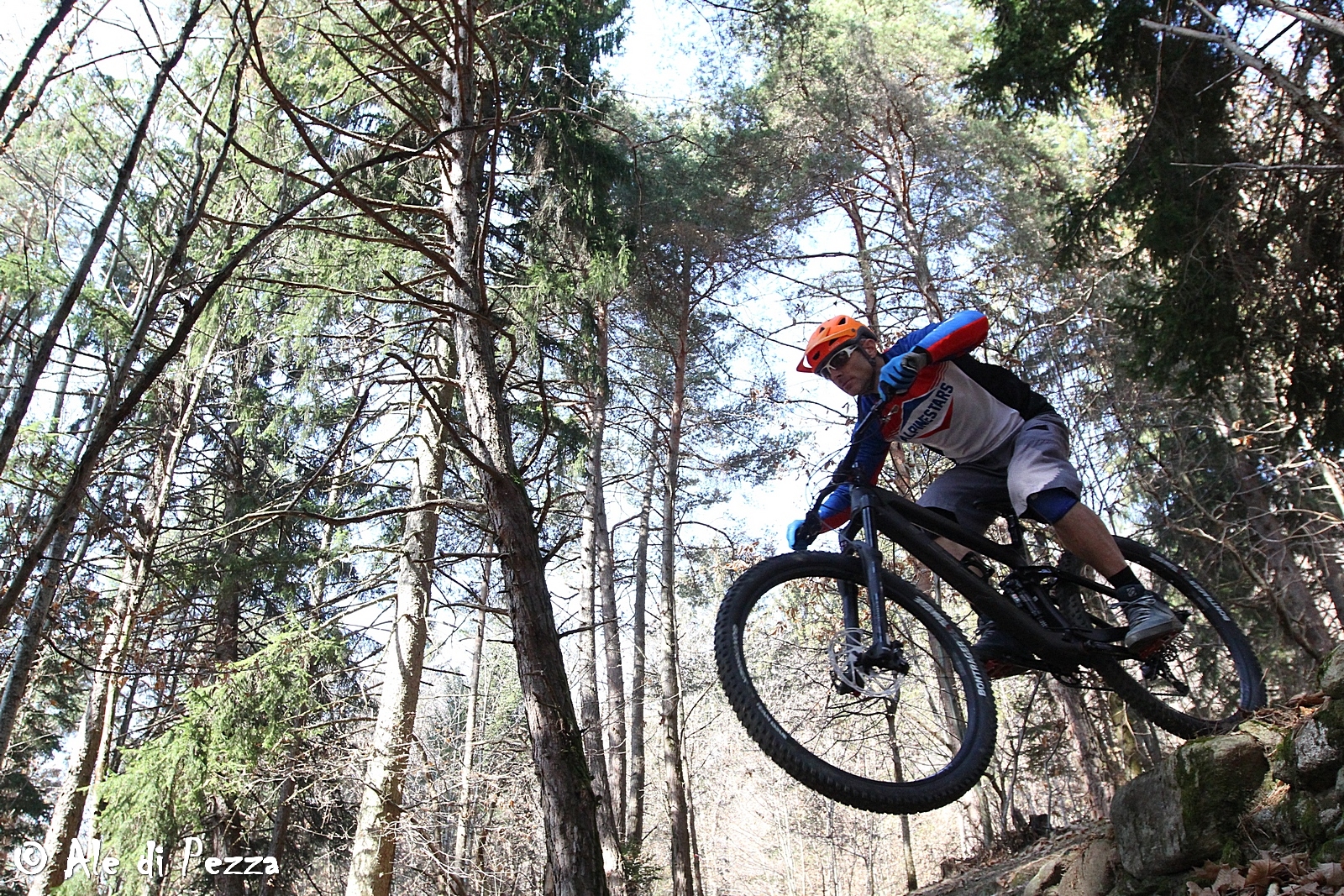 65° head angle, 160mm front travel and 29” wheels: easy win on steep, rough and fast terrain. Thanks to the awesome suspension system, geometry and stiff frame, the Slash is perfectly stable on fast and technical sections, where you can choose the most direct line from point A to point B in total disregard of the obstacles you have to pass. Despite having no full floater, the ABP scheme proved once more to be one of the best in terms of sensitivity and braking neutrality. Taking advantage of the available travel, the suspension remains progressive, soaking up the biggest hits. The RockShox Deluxe progressivity is fully customisable by adding volume reducers and, having the possibility, we would have added at least one more on the tested bike. During the test, landing from drops, we had some bottoms out, though very soft. 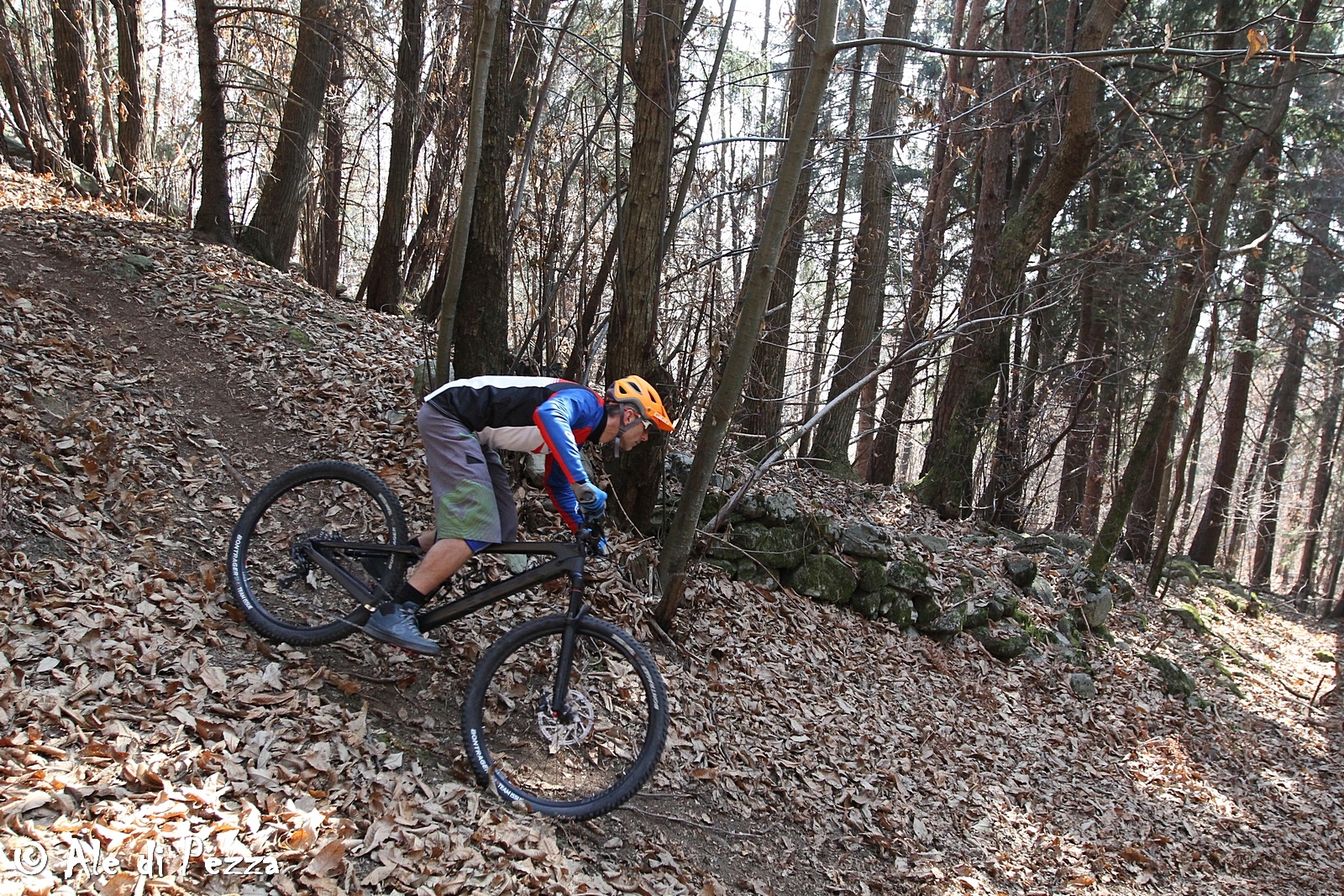 On twisty sections, this is not the best bike for a passive style of riding but you definitely don’t need to be a world cup rider to handle it through back to back turns. If you lean and load the wheel with confidence, trusting the grip of the front tire and the high stability, the Slash will turn smoother than the geometry charts may suggest. The hardest part is riding at slow speed or with a nervous pace but, all in all, this is what to expect from a bike which was clearly designed for high level, downhill oriented enduro races. It is way better to let it flow, keeping the front on the ground than to jump here and there wasting a lot of energy. If you follow this advice, the Slash will run like a train on the track, safe and stable, in a way that may force you to re-adjust your braking points on your home trails (this is due also to the brakes).

Since we know the Slash’s downhill potential, we tried to discover its weaknesses; riding slow, trials like descents. The overall length takes its toll (long wheelbase and 29” wheels) on tight sections, but it is not a big limiting factor once you get used to it. We had no issues at all with the knock block, even on the sharpest of switchbacks. 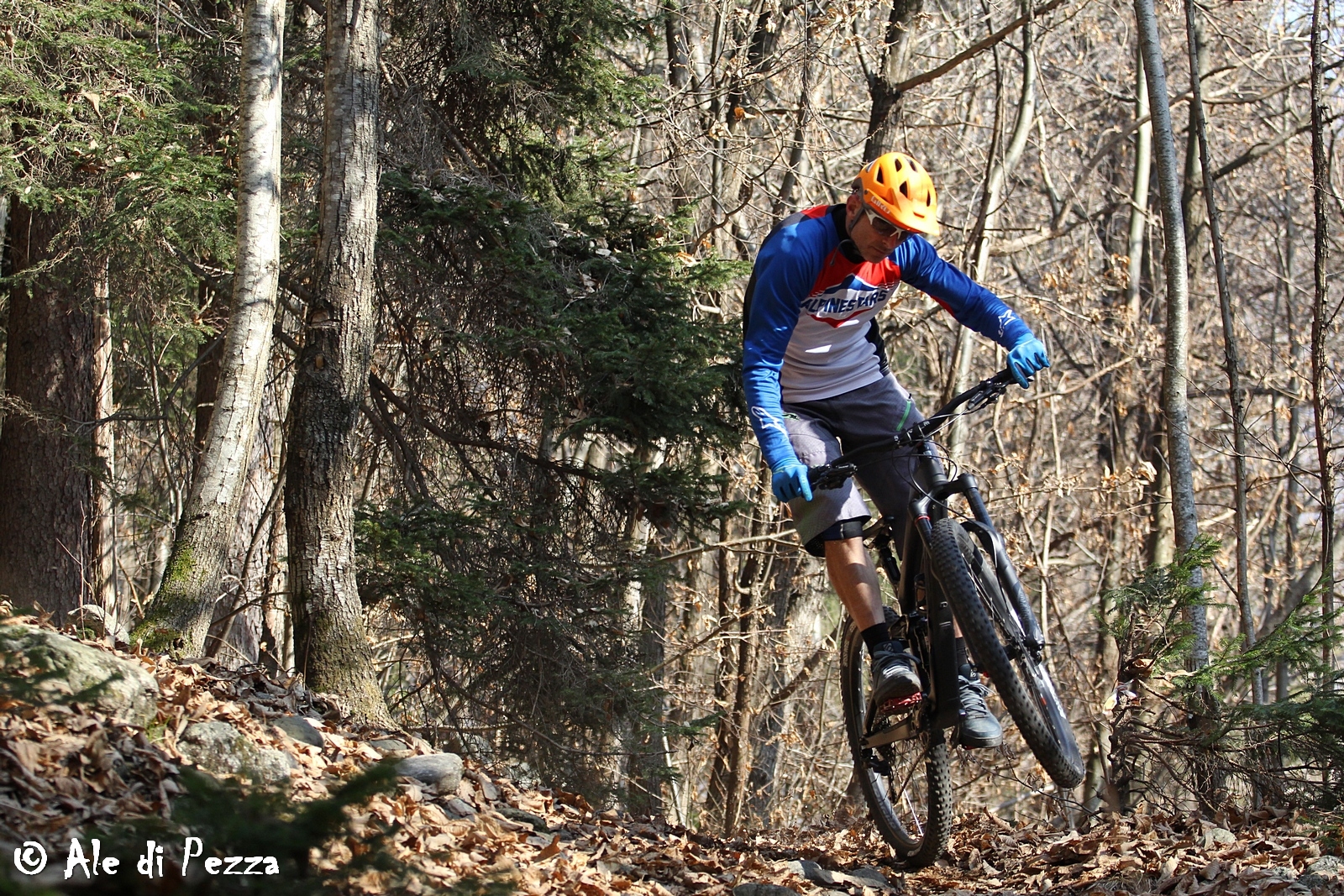 The frame, the specs and the on-trail characteristics clearly suggest this bike is made for races. It is hard to ride on climbs for non-fit riders and on downhills for those with a passive style; on the other hand, trained and aggressive riders can appreciate its pure downhill potential and its surprisingly good all-around qualities.