After the various videos shot during the tests, we finally publish the comparative analysis between two Enduro 29ers that were launched last summer: the Specialized Enduro 29 and the Trek Slash 29.

We tested the standard build, which you can find directly at the bike shop. Both frames are full carbon, L-sized (the Trek is 19.5”), with tubeless setup. Geometry is explained in our presentation articles (here the Enduro, here the Slash). In the following section we will focus on the various differences and similarities of the two bikes. It is worth noting that both models are Boost, so you can also install 27.5 plus rims and tires. 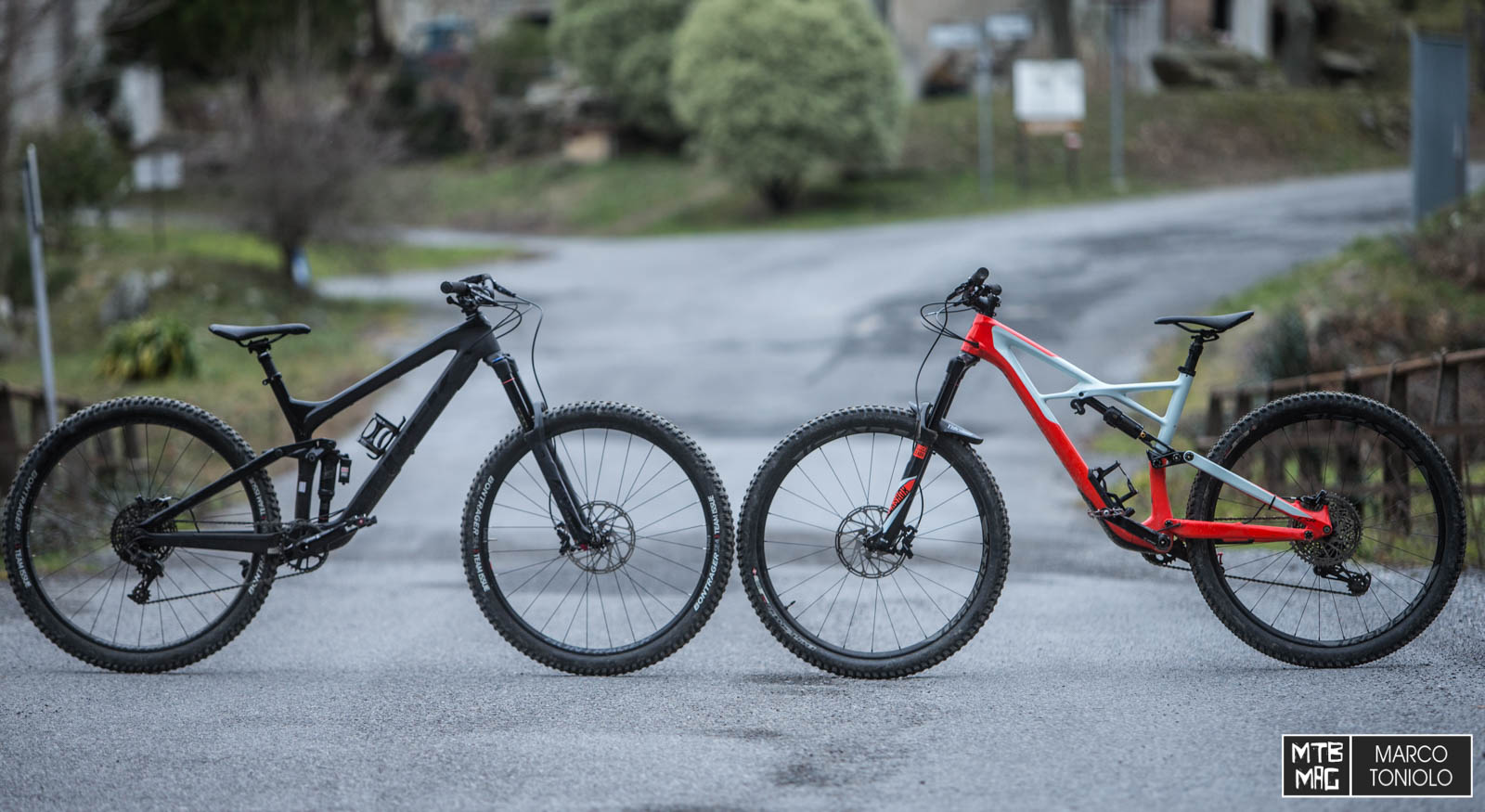 Both models are equipped with a 160mm RockShox Lyrik. The Slash comes with a Dual Position RC, adjustable by lowering the left knob and then compressing the fork. The Enduro has a Solo Air RC with compression control on the right knob.

Trek uses a RockShox metric shock, the 230×57.5mm Super Deluxe, while Specialized mounts a classic 216x57mm Öhlins STX22 with the Autosag valve (the one without cap in the picture).

Specialized chose its usual FSR suspension system, while, on the Slash, Trek dismissed the Full Floater and anchored the shock on the front triangle, keeping the ABP junction on the rear pivot.

Another difference is that Specialized introduced the SWAT Door on the Enduro carbon models, though eliminating the useful top cap chain tool on this model.

On the other hand, Trek launched “Knock Block”: a protection placed in the top tube and integrated into the headset which prevents the complete rotation of the handlebar in the case of a fall. In the right picture is shown the maximum steering angle allowed. This does not affect the handling on narrow sections or nose wheelies at all.

Both brands chose the single chainring SRAM transmission. A 1×12 Eagle 30 tooth front chainring (and aluminum X1 drivetrain) is installed on the Enduro, while the Trek Slash, showing its competition nature, features a X1 1×11 with a 32 tooth chainring, which is really aggressive on this bike, because a 32×42 on steep sections requires you to be in a really good shape.

The Slash has an adjustable geometry thanks to the Mino Link, which lifts or lowers the bottom bracket by 7mm and changes the head angle by 0.5°. Although those are not significant variations, we tested both configurations even in a non-conventional inverted way. In the two descents on video, for example, the bike was in high position on the harsh but straight Varazze Hard Rock trail, and in low position on the curvy Toboga di Canova trail at Finale Ligure. All in all, going downhill, the handling doesn’t change that much. On climbs the slight adjustment of the head angle combined with the 7mm higher bottom bracket, provides more bottom clearance (especially when you lower the fork).

Both Specialized and Trek mostly installed their own components. The Specialized has a 125mm Command Post IRcc dropper post.

Here is the Bontrager Drop Line 125 on the Trek.

The same can be said about the 780mm handlebars, the rims and the tires. Both Roval and Bontrager, after some hub-related problems of their early years, considering also the various tests we’ve carried out, have become two great wheel producers. For example, Marco broke one spoke on the Specialized before going to Liguria to ride on the rough trails you see in the videos. We didn’t have time to replace it but the wheel worked perfectly anyway, apart from being slightly out of true, but you have to know the Varazze downhill is really brutal for the components.

We felt really confident riding with the 2.4 Bontranger SE4 Team Issue tires. The 2.3 Butcher front tire and in particular the 2.3 Slaughter rear tire, which rolls very well but provides low traction on wet terrain, were a little less than ideal.

We intentionally wrote the weights before talking about the on-trail test: these bikes are two downhill rockets. The climb is the “necessary evil” to reach the start of the track. These are the second-level models of the respective Enduro fleet. The more you go down the scale, that is, the less you spend, the heavier the bike is, thus it consequently becomes harder to climb.

Straight to the point: the Specialized Enduro is the better climber. The forward seat position, thanks to a steep seat angle, 76° compared to the 74.1° (73.6° in low position) of the Slash, makes the pedaling more efficient. The difference is reduced if you lower the fork, but say on a steep punch during the descent, with no time to lower the Lyrik, it is hard to control the Slash because the front wheel tends to lift up and you have to be quick in pushing it down working with your upper body.

On fast climbs, on asphalt or off-road, you have to be patient and have strong hocks to reach the top. But this is no news for those who ride 13-14 kg enduro bikes. On technical terrain everything is different: it takes a big effort to keep the front wheel of the Slash down on ramps or difficult sections also considering the demanding gear ratio. With the Enduro the life is easier but in the long run, carrying those 14 kg, fatigue kicks in anyway.

Let’s start talking about the seat position: on the Slash you are more stretched out, but out of the saddle there are almost no differences between the two bikes. Things change when you actually ride the bikes, since on technical terrain they require two different styles.

Both models are extremely stable and safe on fast sections with a regular surface. The plush rear shocks are both sensitive in the first part of the travel and are able to exploit every millimeter to soak up the big hits. The two different versions of the Lyrik behave in a very similar way, being precise and solid, but progressivity can still be improved (maybe by adding some tokens since both models are provided with just one out of five). In the most difficult sections, especially on steep angles, the Slash is more trusty thanks to the slacker head angle and the longer wheelbase.

On technical terrain the differences are more pronounced: the Enduro makes you feel confident and comfortable from the first minute onward, it is easy to ride in twisty sections and it doesn’t require an aggressive style of riding. The Slash is more demanding and, even though the myth that all 29ers are hard to turn has already been dispelled, it is fair to say if you don’t properly load the front and don’t take the lines with commitment in advance, a mistake is around the corner. The Enduro, despite the added rear travel, is more responsive, easy to pump and it doesn’t take so much effort to lift the wheels off the ground. The Slash is more in line with what one would expect from a bike like that. You feel confident enough to adjust the lines in total safety but at the same time you need to be aggressive when you can’t just go straight down.

All in all the Enduro is more all-rounded while the Slash is more of a “mini DH” bike, the kind that is now at the top of the game at high-level enduro racing.

Let’s close out with some thoughts about three main downhill components: brakes, tires and dropper posts. Brake performance came up short on the Enduro as well as on the Slash, lacking in power on such bikes and with a too long of a throw the levers. Regarding the tires, we preferred the Bontrager installed on the Trek also because of its travel. Both dropper posts worked well with the Bontrager Drop Line being really smooth. 125mm of travel on L-sized bikes with seat tubes shorter than 470mm is a bit too short, especially considering there are plenty of other options with more travel. 150mm is ideal.

Even though on paper they are quite similar, the on-trail test revealed the different “character” of the two bikes: the Slash is more downhill oriented, it is a rocket on harsh, fast sections and requires an aggressive style to handle the slack head angle and the long wheel base. The Specialized Enduro is more of an overall bike which climbs well (also on all mountain terrain) but is more reactive and playful to ride downhill.

Both bikes are going be at the top of the want list for Enduro riders who love to ride fast but safely downhill.

In the next weeks we will publish the single tests with an additional comparison to the previous version of the Enduro 29.