[ad3]It took some time for Turner bikes to finally bring the latest version of the RFX to life, but it was well worth the wait. The small Murrieta, California based boutique frame manufacturer felt some growing pains with their second foray into producing a carbon fiber frame overseas; the first being the Czar. After all, since 1994 David Turner has been doing things his way and building all of his creations domestically here in the United States. 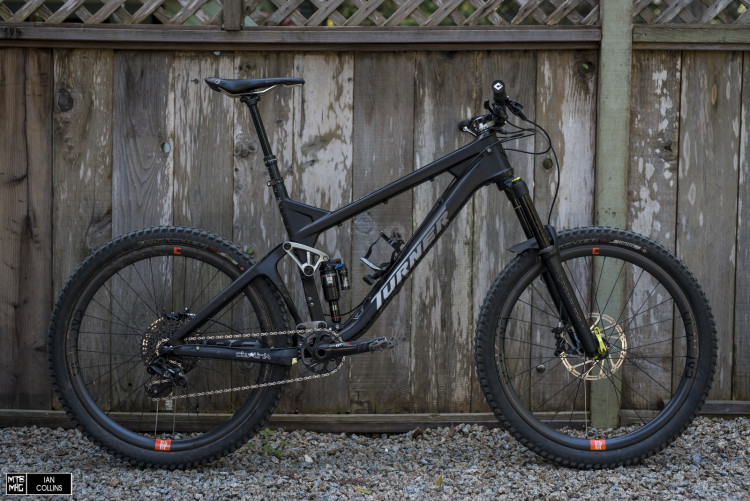 We already posted a breif First Look feature when we received our frame and as we’re conducting this test as a frame only option, there isn’t much to discuss for first impressions.  Rather we’ll chat about what we learned once we built it up after we took a moment to appreciate it’s sleek lines and attention to detail.

The RFX arrives with a 66º head angle which in this day and age is ever so slightly conservative for a 160mm bike.  We knew ahead of time that we’d want to dabble with a 65º head angle, and fortunately Turner are one of a few adopters of the FSA adjustable head angle system.  The RFX uses a 49mm/62mm tapered headtube that can be adjusted up to +/- 1.5° simply by installing different headset cups.  As pictured below on the right, the downtube has an indicator molded in which helps you set your cups straight to avoid creaking. 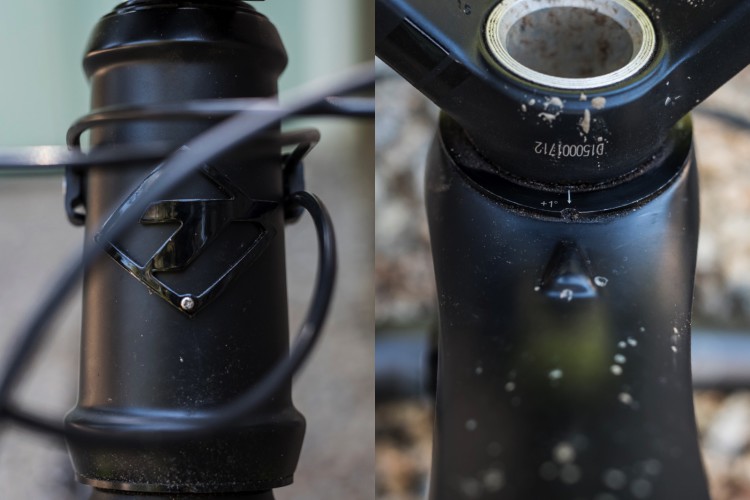 First off, we found the external cable routing to be easy to work with.  Aesthetically, it’s pretty clean.  Not quite as clean as internally routed bikes, but the tradeoff is that it’s much easier to work on.  If you’re out on a race weekend and you have to pull things apart, the last thing you want to deal with is re-bleeding a brake which has the hose routed through the front and rear end of your frame.  There is something to be said for the clean looks of internal routing but from a functional standpoint, external is better.    It can also be quieter.  We’ve tested bikes that made a racket because the hose/cable slapped the inside of our frame’s tubes.  The RFX has bolt on cable guide clamps so you’ll never have a brake hose get sucked into your rear wheel because a cheezy zip tie snapped.  Some of the guide clamps are a little finicky to access and the rear derailleur routing is less than ideal.  It’s a small matter in the grand scheme of things, and we didn’t have any problems with it, but we just weren’t happy to see it getting battered by the chain.  If it’s really a concern, a lizard skins style neoprene guard would cover it nicely.  By the way, the dropper post routing fortunately DOES go internally; we like that. 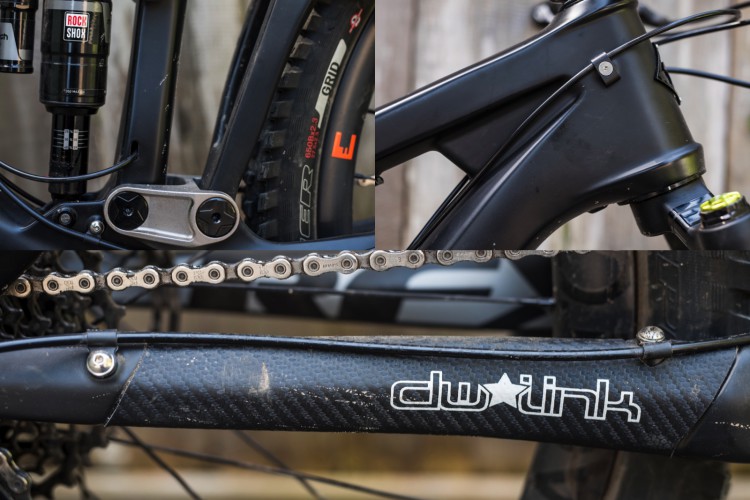 Other notable details include a rather substantial bolt on downtube guard, post mount style rear brake fitting and BB30.  The post mount style brake is brilliant as threaded barrels drop into the frame itself; that way should a meat fisted mechanic strip one out, it doesn’t destroy a whole rear end of a $3k frame, but rather a super cheap piece of hardware.  The RFX is spec’d with BB30.  While it is stiffer, we generally had mixed feelings about it until Praxis Works came around.  Praxis is a budding components company right down the road from our US editor who tested the bike in Santa Cruz.  We gave them a ring and installed one of their conversion bottom brackets so we could run our standard GXP cranks.  It’s brilliantly simply, beautiful and hasn’t made a peep.  Turner is actually using the Praxis BB’s as OEM spec on their complete bikes, so you know it’s good. 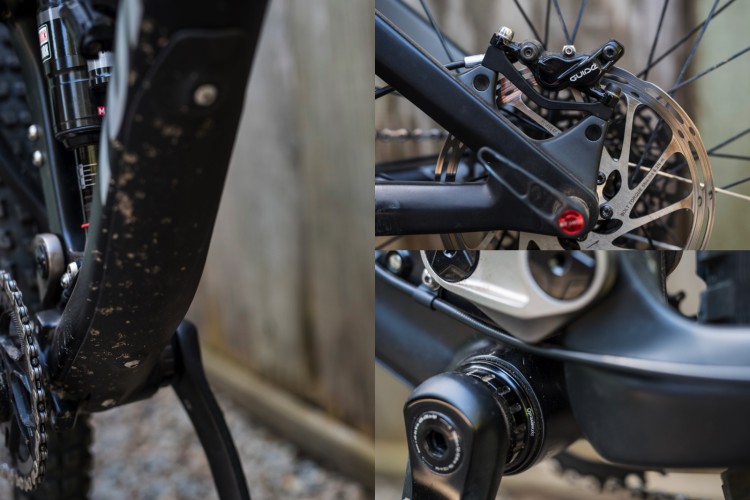 We rode the RFX with a RockShox Lyrik and a DVO Diamond; both of which are excellent forks.  The Lyrik has a 42mm offset and the Diamond has a 44mm offset.  Unsurprisingly, we couldn’t differentiate between handling characteristics from that 2mm difference.

As for rear suspension, our RFX arrived with 1 volume reducing spacer installed in our rear shock and we ended up adding two more in to provide a bit of additional ramp and bottoming resistance.  We prefer a great deal of support and think most riders will be happy with one or two spacers.  Regardless, we’re happy Turner spec’d the Debonair with its easy tuning.  Turner have made a point to educate their customers and provide them with this resource for tuning their RFX.  Unlike every bike brand we’ve ever worked with, they actually include a few extra volume reducers with their frame so consumers can dabble at home and find the optimal setup.   Like most Dave Weagle designed kinematic platforms, it’s recommended to run 30% sag, so that’s exactly what we did.

A couple years back we got to spend quite a bit of time on a size large RFX to help generate suspension tuning feedback when the RFX was in its early developmental phase.  Our long limbed 6 foot tall tester felt ever so slightly cramped on that bike (as he does on many large frames) and opted for a 70mm stem to feel comfortable in lieu of his go to 50mm length.  In any case, for formal testing of the bike he opted for the XL.  Initially it felt a touch large but as mentioned we swapped from the stock 66º head tube angle to the more relaxed 65º.  Doing so brought our reach back a bit and we found the bike to be just right although in turn, the wheelbase grew a touch.  We’re constantly finding ourselves between Large and XL bikes so we’re used to it.

Upon first setting out on most rides in California, one begins with a substantial climb.  The DW link suspension platform is incredibly neutral.  So much so that on technical climbs we found it was almost better to just throw the rear shock in middle “trail” mode setting rather than to lock it out completely.  This provided a little bit of give, improving traction on the rough climbs.  For long fire road grinds, we locked it out all the way and just put our nose to the grindstone.  For quick climbs between descents on undulating trails, the kinematics are so good that you aren’t really even thinking about a lockout switch anyway. 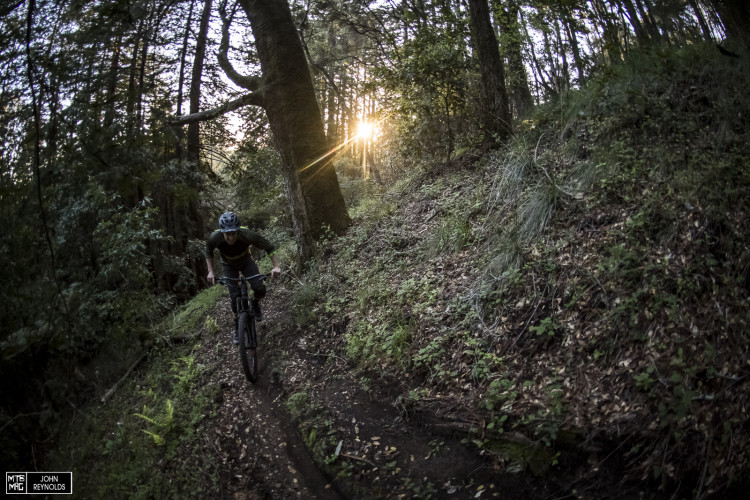 The longish 17.35″ chainstays gave the RFX tractor like grip on the steep climbs where we would otherwise find ourselves struggling for traction on bikes with shorter chainstays.  Many mid travel bikes with short rear ends have us sliding forward on the saddle and struggling to get our weight ahead of the rear axle on steep climbs; this was NOT the case with the RFX.  Its relatively steep 73.5º actual seat tube angle assisted in getting our weight forward. Lastly,  the RFX has a discrete direct mount front derailleur option on the seat tube.  While many manufacturers are moving away from this option as 1X expands and becomes more prevalent, Turner have found a way to squeeze it in by utilizing a great deal of asymmetrical construction with in the linkage, hardware and even the entire rear end.  All day climbers and die hard 2X riders rejoice!

With 160mm of travel out back, the RFX is staunchly aimed at the Enduro market.  We love that the bike can be fine tuned to the terrain/riding style with headset cups.  Riders who find themselves on less rowdy terrain can go all the way up to a relatively steep 67.5º head angle to tighten up the steering.  On the flip side riders who are riding mega steep or super fast terrain can go all the way down to a 64.5º head angle to relax the handling and increase stability at speed.  That’s a great deal of range and we wish that more manufacturers would follow suit.  In any case, our bike was incredibly capable with the 65º head angle we chose.  It is one of the most well behaved bikes in its category.  Especially at speed in wild sections.  On the roughest and fastest root ridden steeps that we rode, it was very composed and tracked incredibly well.  This frameset is rock solid and stiff without feeling harsh.  The well thought out layup smoothes out chatter while providing snap and resilience out of turns.

As for suspension, we were quite floored with how well the RFX resisted unnecessary dive caused by mass transfer(body movement, pre-loading, pumping, braking) yet still managed to eat up mid size hits.  DW link bikes are known for their supportive nature and this was no exception.  Overall, the suspension action was light off the top making small bumps disappear and prevent the rider from getting rattled to death.  The mid stroke support was excellent and it had a nice bit of ramp at the end of the travel to prevent bottoming.  That’s all you can really ask for in a suspension system. 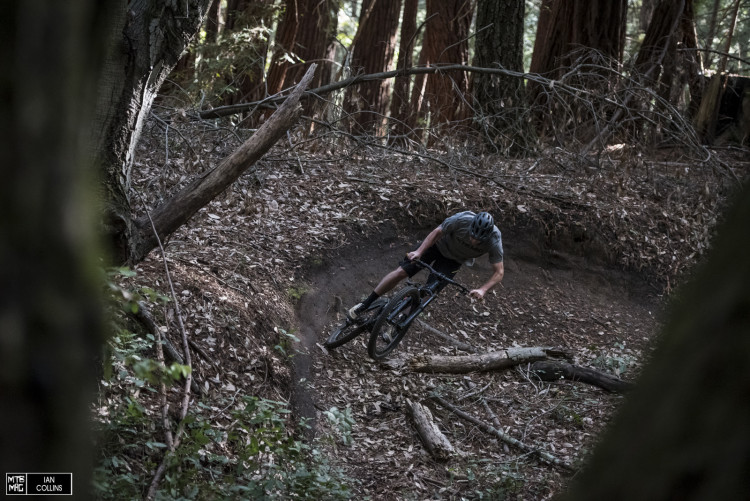 The 13.4″ BB height is just about right and strikes the perfect balance between helping the rider dig into turns while still offering enough clearance to prevent rock strikes.  While offering incredible stability in the high speed rough sections and better climbing traction, the tradeoff of the slightly longish chainstays is that they aren’t quite as snappy in the really tight punchy turns.  This is a minor nuance and all comes down to personal taste.  90% of riders will prefer and benefit from this chainstay length and it’s ride characteristics.  Only a very small percentage of riders will prefer ‘stays hovering around the 17″ mark.

Jumping is predictable and generally an afterthought; the RFX is comfortable in the air.  It’s resilient and snappy as could be.  Turner Bikes have always been known for using excellent geometry sets and this bike is no exception.  Although there are no adjustments aside from the head angle, we think this bike could suit anyone from the weekend warrior, to the bike park rat to an elite enduro racer.  It’s a highly versatile, fun loving machine…

Our time on the RFX has constantly left us smiling.  We find very little to complain about in this bike and the few hairs that we have split simply come down to personal taste.  Things like sizing, internal vs. external cable routing, short vs. long stays…As for the quality of the frame, it’s top notch.  The hardware, construction and attention to detail are second to none.  That’s what you should get for a frame clocking in at just under three grand.  Then again, there is more to the picture than that – let’s not forget that Turner’s customer service has an absolutely golden reputation.  Some consumers will also find it satisfying support a small, boutique US brand.  Don’t take our word for it, your best bet is to ride one for yourself ; you’ll likely be very impressed.  Turner has a great demo program do some research and check one out if you’re considering an RFX in the future, there very well could be a bike near you available for a quick jaunt.

[Video] Jared Graves injured and out for Bariloche