Trek introduces the new Fuel EXe, a “lightweight” e-bike aimed at the Trail/AM category. The new bike is by far the one that comes closest to a traditional MTB, both in terms of aesthetics, pedaling and riding characteristics – all while remaining very silent.

This is thanks to a very small motor, produced by the German company TQ, based on the harmonic pin ring technology, that is to say a concentric system that does away with gears and belts. It is first explained through an animation found in the video / test. Furthermore, there are no words that describe the silence of this system: turn up the volume and enjoy the video shot (english captions, click con CC) between Livigno and the Engadin on this ride.

My test bike was a size Large, which I was comfortable with. I’m 179cm tall and have a seat-to-bottom bracket distance of 74cm. As you can see from the video and photos below, I still have room to put a 170mm dropper post in if I wanted to.

The geometry is adjustable through the Minolink – a flip chip placed on the link between the rear triangle and the front triangle. The bike arrives to the customer in the low position, which is how I have always kept it. The high position comes in handy if you want to turn the Fuel EXe into a mullet.

The heart of the new Fuel EXe is TQ’s engine. It is only noticeable from the non-drive side and weighs around 1,900 grams. Another 1,800 grams goes to the battery, for a total system weight, including cables, of 3,900 grams. The battery is removable, as shown in the video, and also powers the SRAM AXS rear derailleur.

To understand how it works it is necessary to look at the animation in the video. 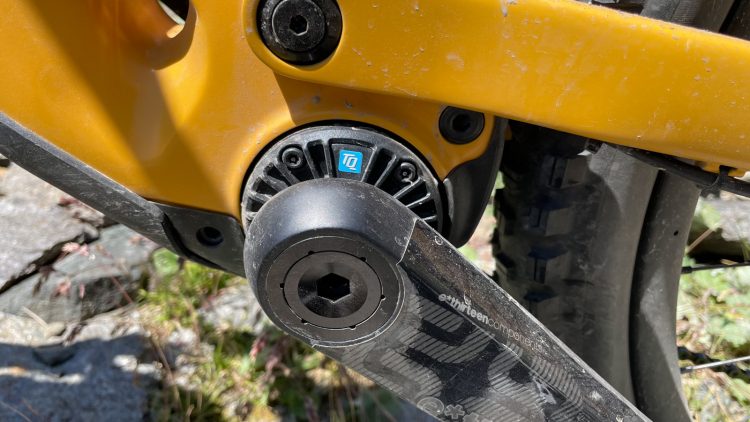 If the battery is dead, Trek says it’s still possible to do about 200 shifts. In any case this is a problem that would only arise with the top of the line bike. 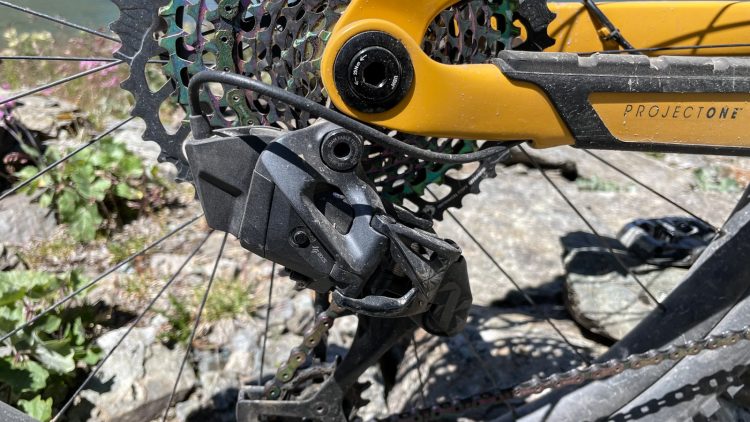 The Rock Shox Ultimate suspension is equipped with the AirWiz system, with which you can set them to the values ​​suggested by the SRAM or Trek app. 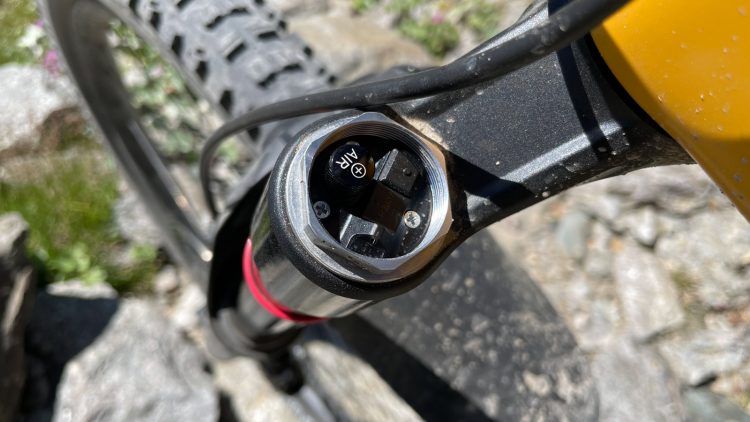 The same type of system is present on the tires. For that, I refer you to my TyreWiz test for all the details. 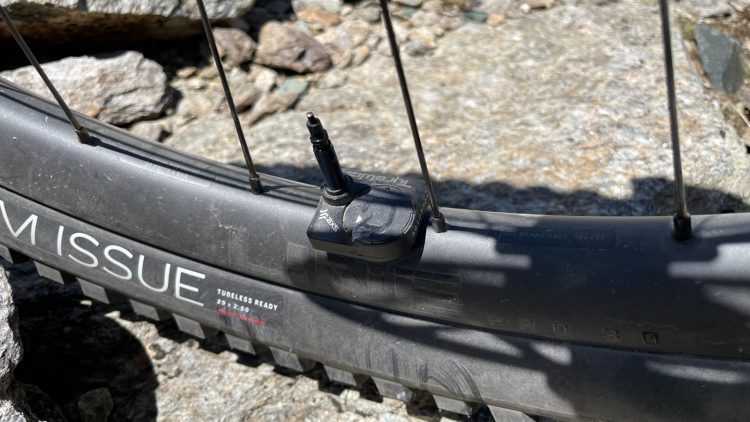 The display is integrated into the top tube and has 4 screens that can be selected using the button under the display itself. It reads well in any light conditions. 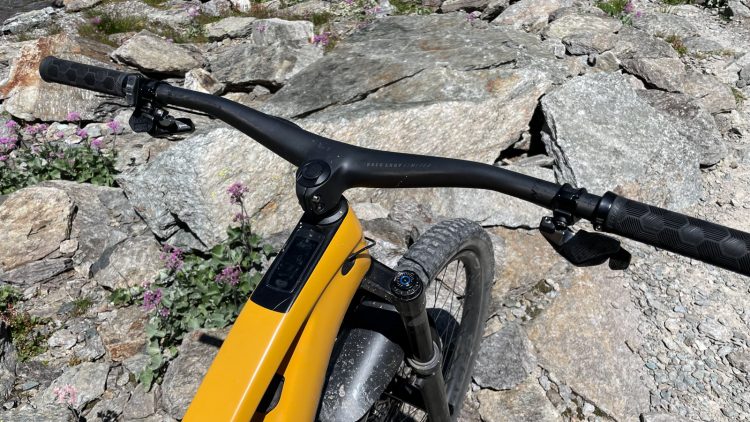 Detail of the display. 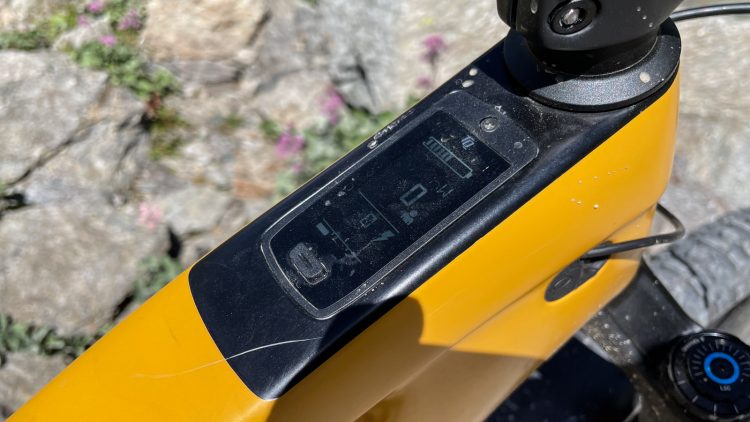 The remote control is small and functional, drop-proof. The Walk mode assists very well when needed. 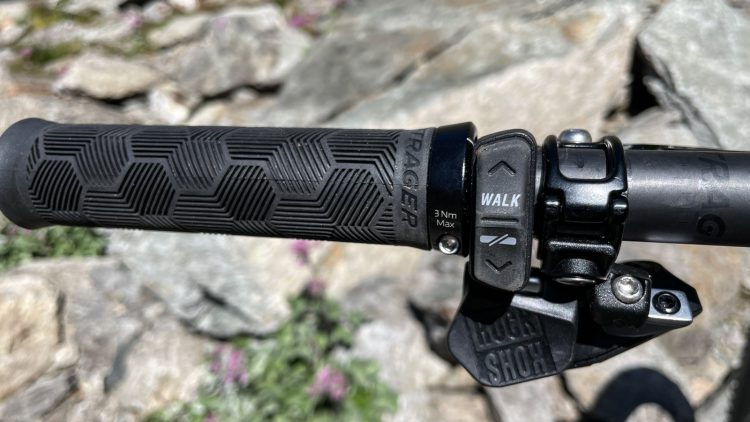 A very well thought out multitool fits into the fork steerer, complete with a chain tool. The system that holds it in place also acts as a headset tensioner. 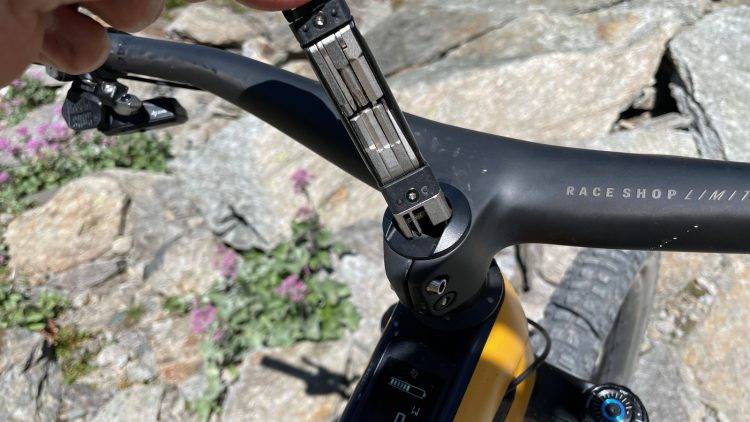 There is nothing to complain about regarding the braking power of SRAM Code RSC with HS2 200mm discs. 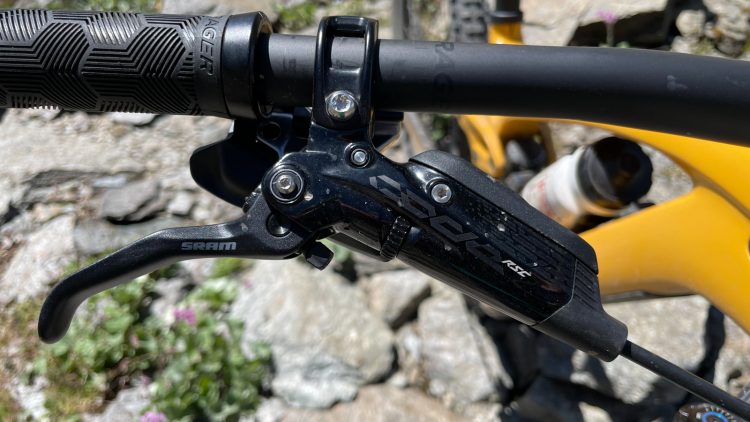 Rock Shox Deluxe Ultimate Shock with AirWiz. Combined with Trek’s ABP suspension, it creates a kinematics that sucks up chatter and smal obstacles very well, is well supported in the middle of the stroke and progressive at the end of the stroke. It’s hard to ask for more. 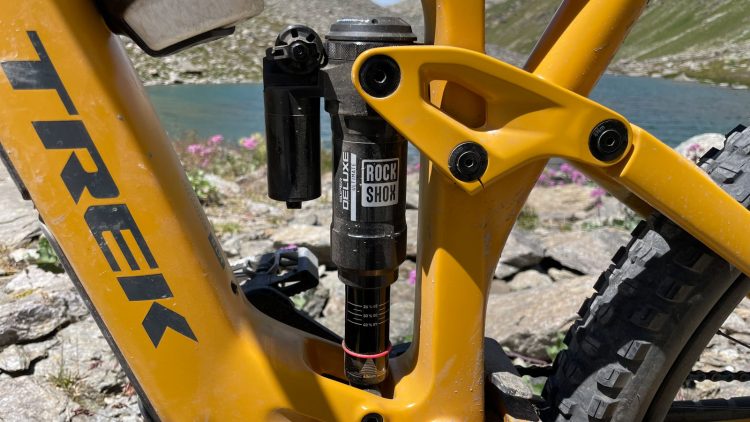 The SRAM Eagle AXS drivetrain needs no introduction. It has convinced us thoroughly and stood the test of time. 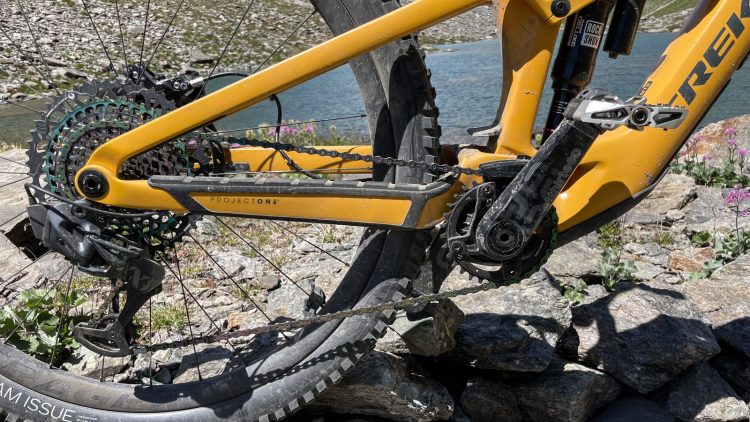 The frame protection is well thought out to prevent dirt from scratching the carbon frame. 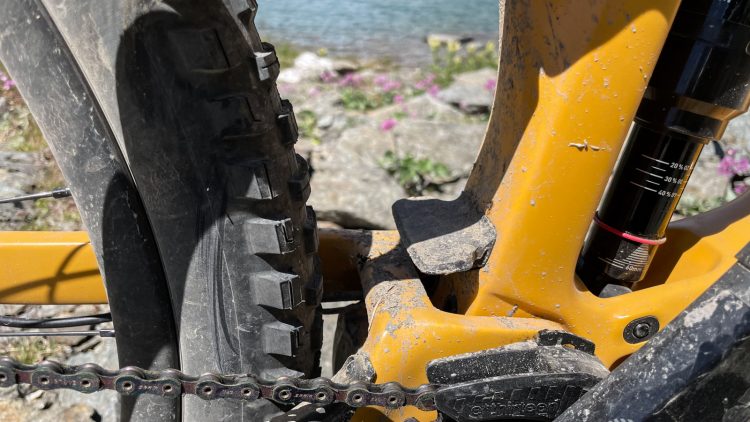 I really like the Bontrager SE5 Team Issue 2.5″ tires at the front and rear. I also use them on my standard bike and will present a test shortly. The only flaw: they wear out quickly. 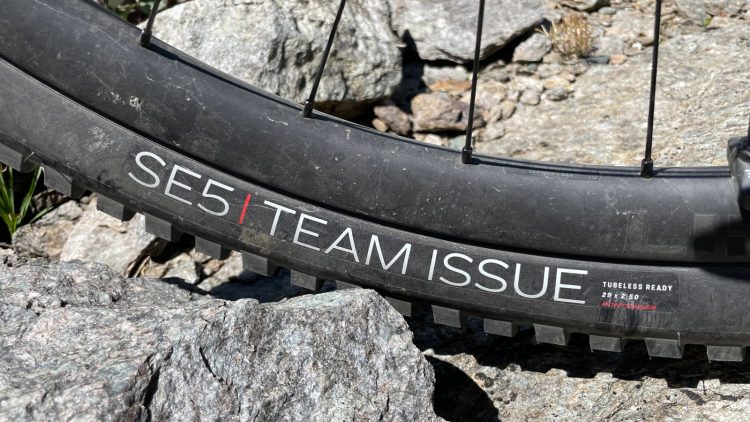 The Rock Shox Reverb AXS dropper post battery is not connected to the bike’s core battery. The operation of this seat post is flawless, as we have already told you in the dedicated tests . 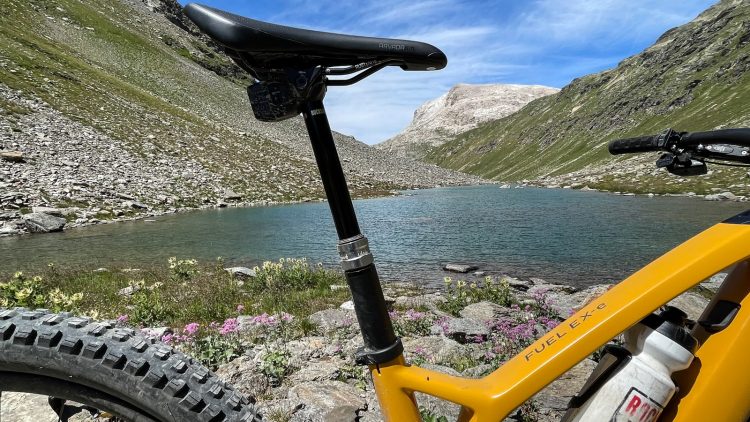 ABP, one of the best suspension systems out there, with a quick release lever that doubles as a 6mm Allen key when pulled out. 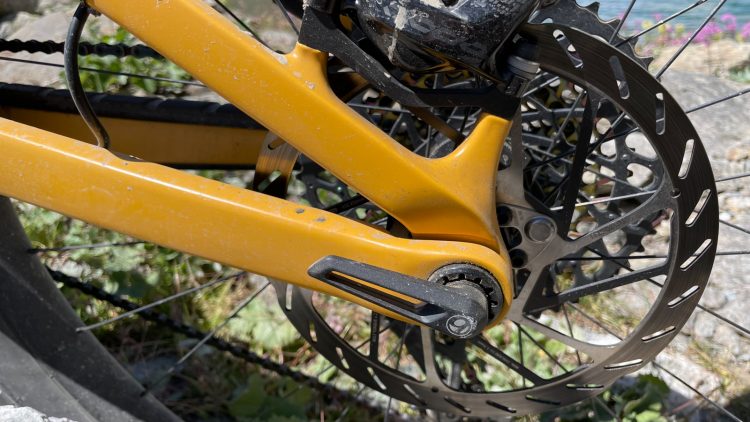 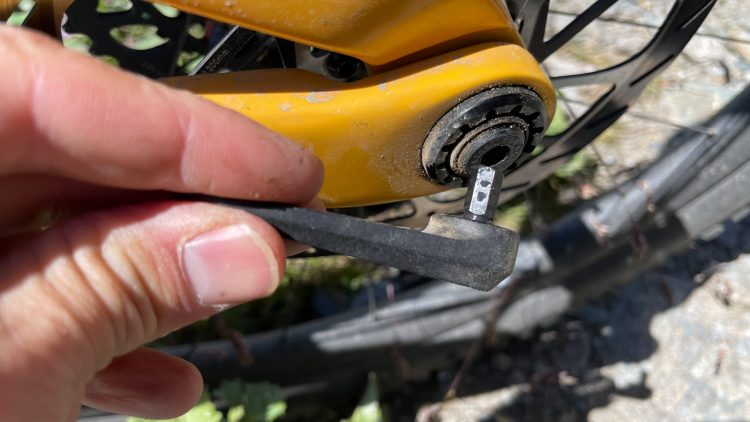 I couldn’t try the app, because it comes out today, but it allows you to vary the assistance, set up the suspension and record your laps. Here are some screenshots. For more details see the video.

The build options can be found on the Trek website .

Nicolai Nucleon 16: a High Pivot With an Innovative Drivetrain